Full map of all areas. Includes the location of all items/abilities, all upgrade cogs (77 on the world map or in caves, 7 from Trader Carson in town) and all 43 artifacts. Also lists all cave names and tube station locations, as well as a considerable number of secret areas, including all gems that count toward secret %.


Also lists all items and their purchaseable/findable upgrades, as well as cog mods acquired via blueprints, how many cogs they take to equip, and their effects.

After doing a quick upscale to help someone in the comments out, I ended up spending five hours or so redoing the map with higher definition a*sets and my more modern style. If it isn’t to your taste, the old map is still at the bottom of the page.


I’ve tried to make it clear on this one what you can get in each cave, using larger icons and dotted lines rather than tiny icons around each cave mouth. Hopefully that is clearer.


You can find the updated version ON MY GOOGLE DRIVE where I store all my metroidvania maps – [google.com] .

As always, I have to heavily compress images to keep them under Steam’s 2MB file size limit. I’ve separated the Upgrade Table so we can get a higher quality image. 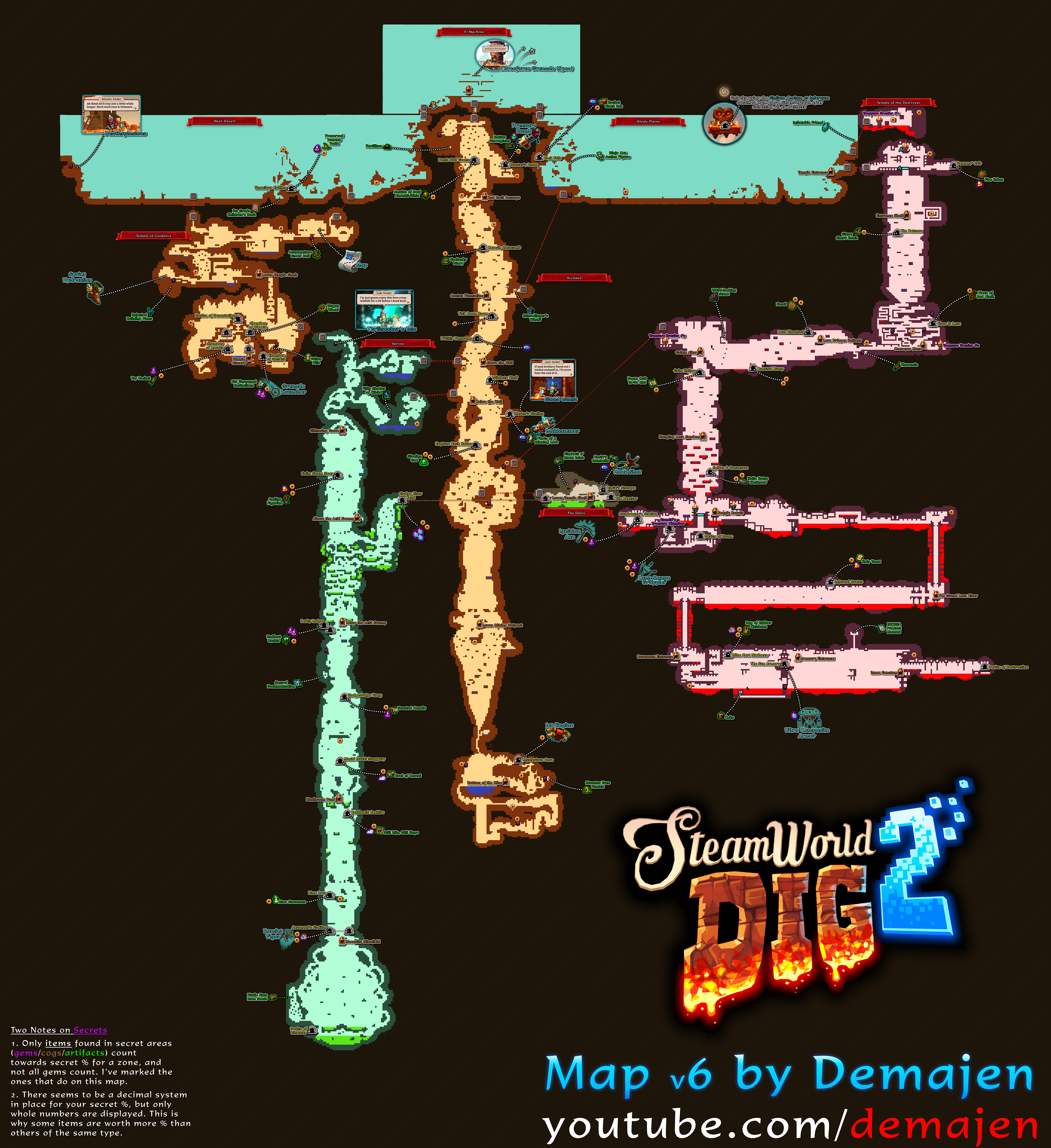 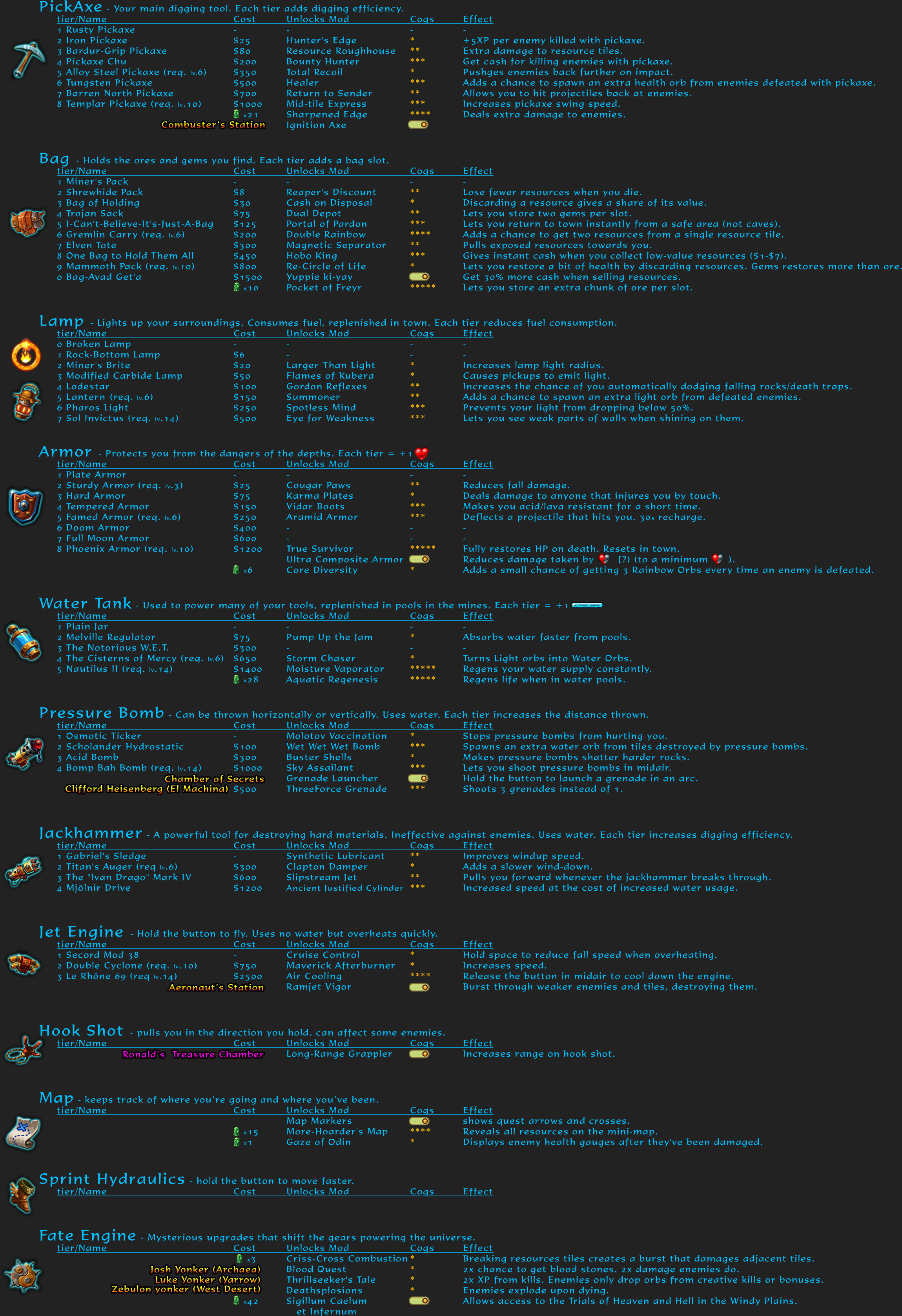 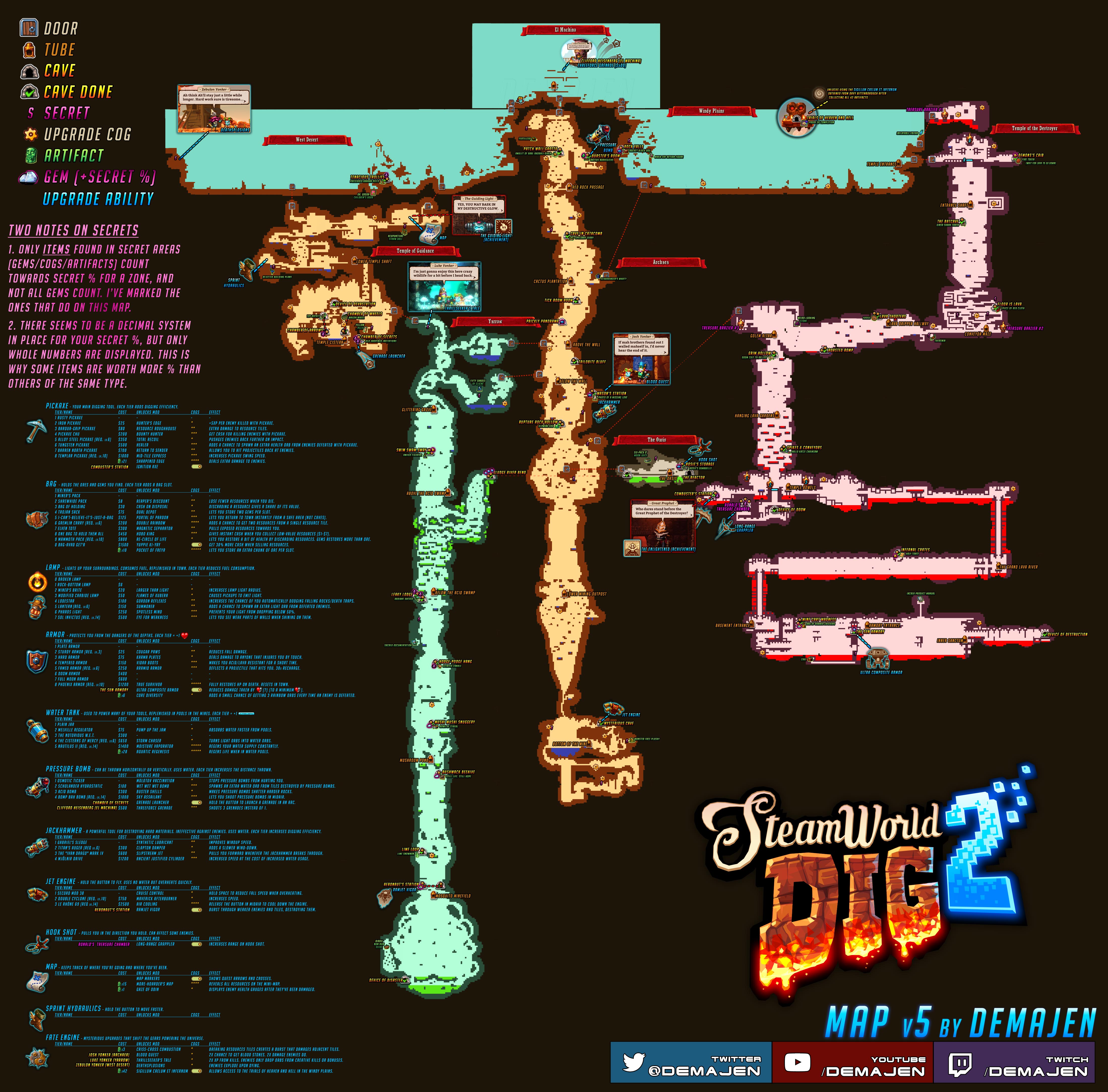 For your reference, I’ve included my SECRETS PERCENTAGE MAP.


I did a complete runthrough of the game’s areas, noting down percentage increases for every single cog, artifact, and gem. I screwed up the annotation % amount a couple of times, but never missed anything.


To 100% each zone, you need everything marked on this map.

I suspect that if you take a different route to me, doing the same exercise, that your %’s will differ from mine. That’s due to the decimal rounding I mentioned earlier.

You’ll notice that some things marked as secrets do not have a % next to them. For example, the shortcut to Windy Plains from Archaea. This says SECRET AREA DISCOVERED when you enter it, but DOES NOT COUNT towards % for either area. I suspect this is confusing to many people.

The Long-Ranged Grappler and Grenade Launcher DO add to your secrets %, as do the blueprints from the Yonkers. The Threeforce Grenade blueprint from Heisenberg in town does not. 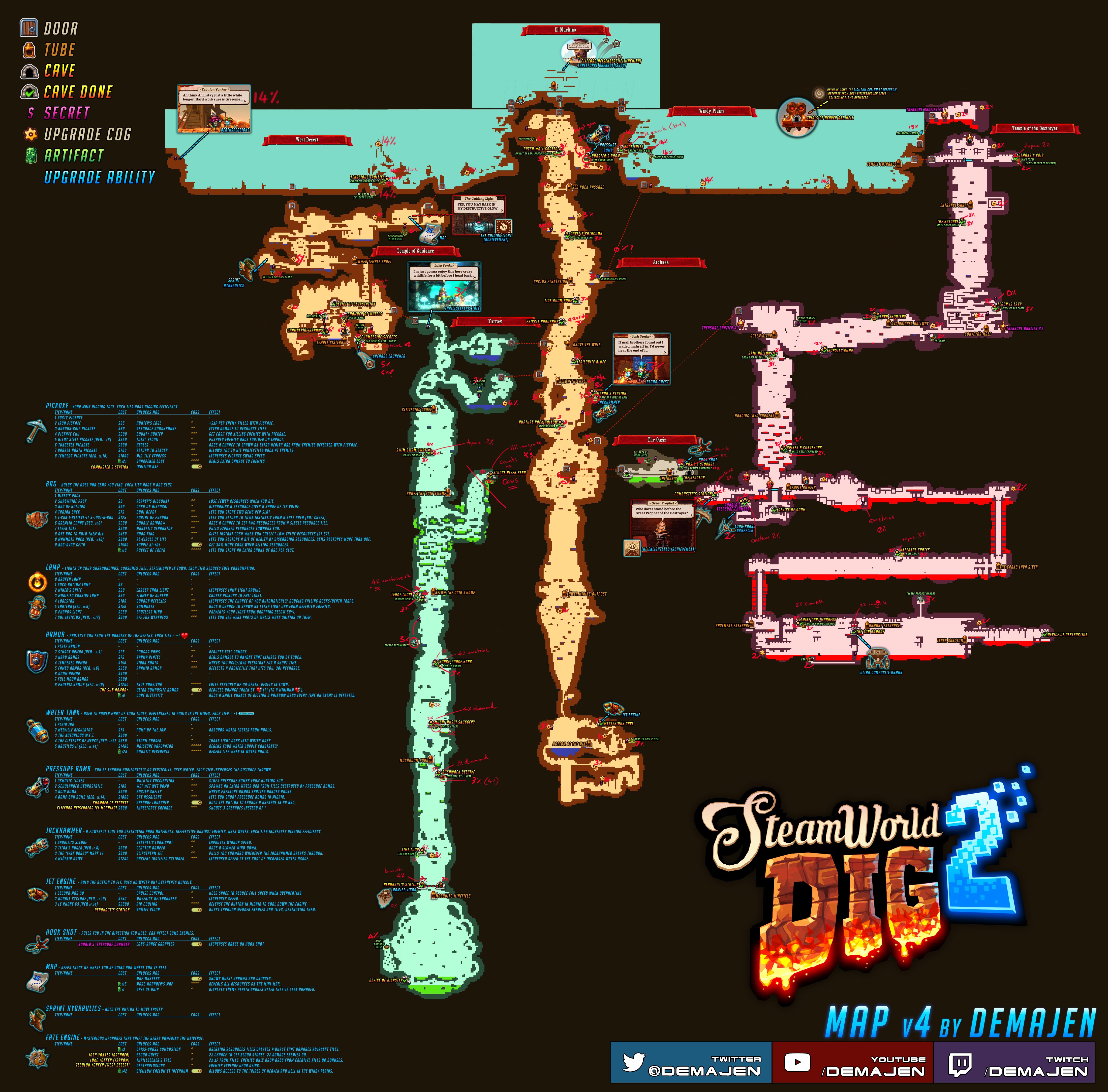 + Added the Proof of Completion artifact to the Trials of Heaven and Hell, out in the Windy Plains.

+ added icons for ALL GEMS that count towards your SECRETS %.


I’ve had a lot of people contact me re: secrets. As far as I can tell, it works as follows:


Every secret in a zone is worth a certain percentage. For example, cogs are often each worth 3 or 4%, depending on the zone. However, I believe each secret has a decimal in its percentage as well that is hidden, so there is no flat rate for all cogs in an area, at least as far as your screen % shows you.


Basically as long as you collect all the items in an area, you’ll be fine.


My map does mark some secrets that DO NOT COUNT towards area percentage. Only items that I have marked on the map count. All others are for your reference only. Hope that is clear.

+ Added image and text for threeforce grenade (blueprint) ($500) and Clifford Heisenberg to El Machina. (Thanks to sbuggbot for the reminder!)

+ Based on the back of my Impossible Dream playthrough, I added in a few more Secret markers to aid you in looking for those last few elusive percent.

+ Added level requirements for a few of the item upgrades.

+ Clarified the info for unlocking the Trials of Heaven and Hell with the sigil from collecting all 42 artifacts. Is there an official name for these trials?


+ Added a huge list of all the abilities, their tiers, their costs, the cog mods unlocked for each, how many cogs they require to activate, the effects of those mods, and if they are acquired by the artifact collection.

Because the upgrades/cog mods info impacts the image quality (Steam only allows you to use inline images below 2mb in guides) I’ve included a link to a lossless PNG version of the file which you can open in your web browser/download to your PC.

+ Changed asterisks to mini cog icons for each cave.

+ Changed and cleaned up colour schemes. (There was too much green text.)

+ Moved a cog in the wrong place. (I can’t do geography.)

+ Changed colour of ‘S’ for secret to pink so it stands out more.

+ All Upgrade Abilities found in the world (non-blueprint) added.

+ Many (but not all) cogs added to open world.

+ Many (but not all) cogs added via asterisks to Cave names. (Number of * = how many cogs in a given cave).

+ Locations for the 3 Yonker brothers.

+ Locations of the 3 braziers that open Ronald’s Treasure Chamber (purple).

+ Location of the 3 braziers that open the blue crystal lever door in Temple Bowels.

Here we come to an end for the 100% Map (+SECRETS% map) – SteamWorld Dig 2 guide. I hope this guide has helped you with your gameplay. If you have something to add to this guide or believe we forgot some information to add, please let us know via comment! We check each comment manually by approving them!