A few tips to help you make some good strategic decisions after you’ve already gone through the tutorial of the game. Go from struggling on easy to playing comfortably on hard.

Dune: Spice Wars is an exciting and timely new 4X/RTS hybrid from Shiro Games, the makers of Northgard, currently in Early Access on Steam. The game is set in the harsh desert planet of Arrakis, the only known place in the universe where the Spice Melange is found. Four factions (with more to come soon) vie for control of the planet and its resources. The game is rife with alliances made and broken, spies sent to investigate and assassinate, armies clashing and occasionally being eaten whole by the ever-present worms.


To help you get started and improve your chances of success on Arrakis, I’ve compiled a list of tips and tricks for new and intermediate players alike. Try them out and see what works for you. 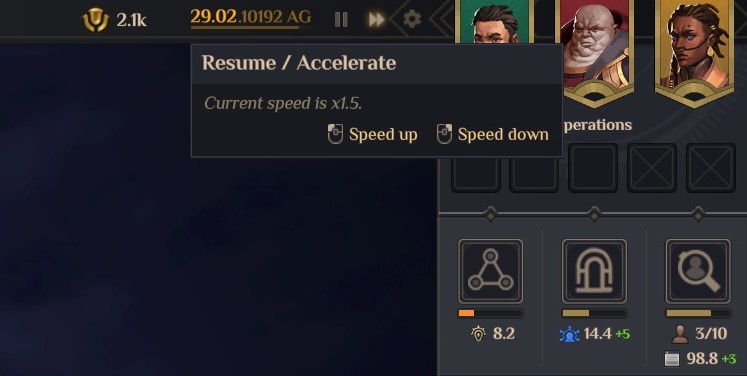 Before we get into the gameplay tips, just a quick meta tip that you can change the game speed (in single player, or if you’re the host in a host-controlled game on multiplayer) or even pause the game in the upper right corner. Playing at 1x speed can really feel like a drag.

Exploration is a big part of 4X games, this one is no exception. When you start, you see nothing but your main base and the direction of your first spice field. You also get a free ornithopter scouting unit. Immediately set it to auto and send it to the spice field territory. Build a second ornithopter to increase the rate of exploration. Also, build a couple military units, you’ll need them to take villages.

Early game, economy matters more than military. You need to prioritize some economy research to get all the resources coming your way. Don’t forget to start your research as soon as you’ve captured your first village, especially in multiplayer.

3. Plascrete is Free, Get it

Though every resource is important (and there are a lot of them in this game), plascrete is arguably the easiest to get and the most vital early to mid-game. Every building requires plascrete, and the other buildings help you get more of all the other resources. If plascrete is your bottleneck, you’re shooting yourself in the food unnecessarily. Build a plascrete factory in every village at the start because it only costs plascrete to maintain and allows you to open the additional buildings slots in all your villages.

4. Race to the Points of Interest 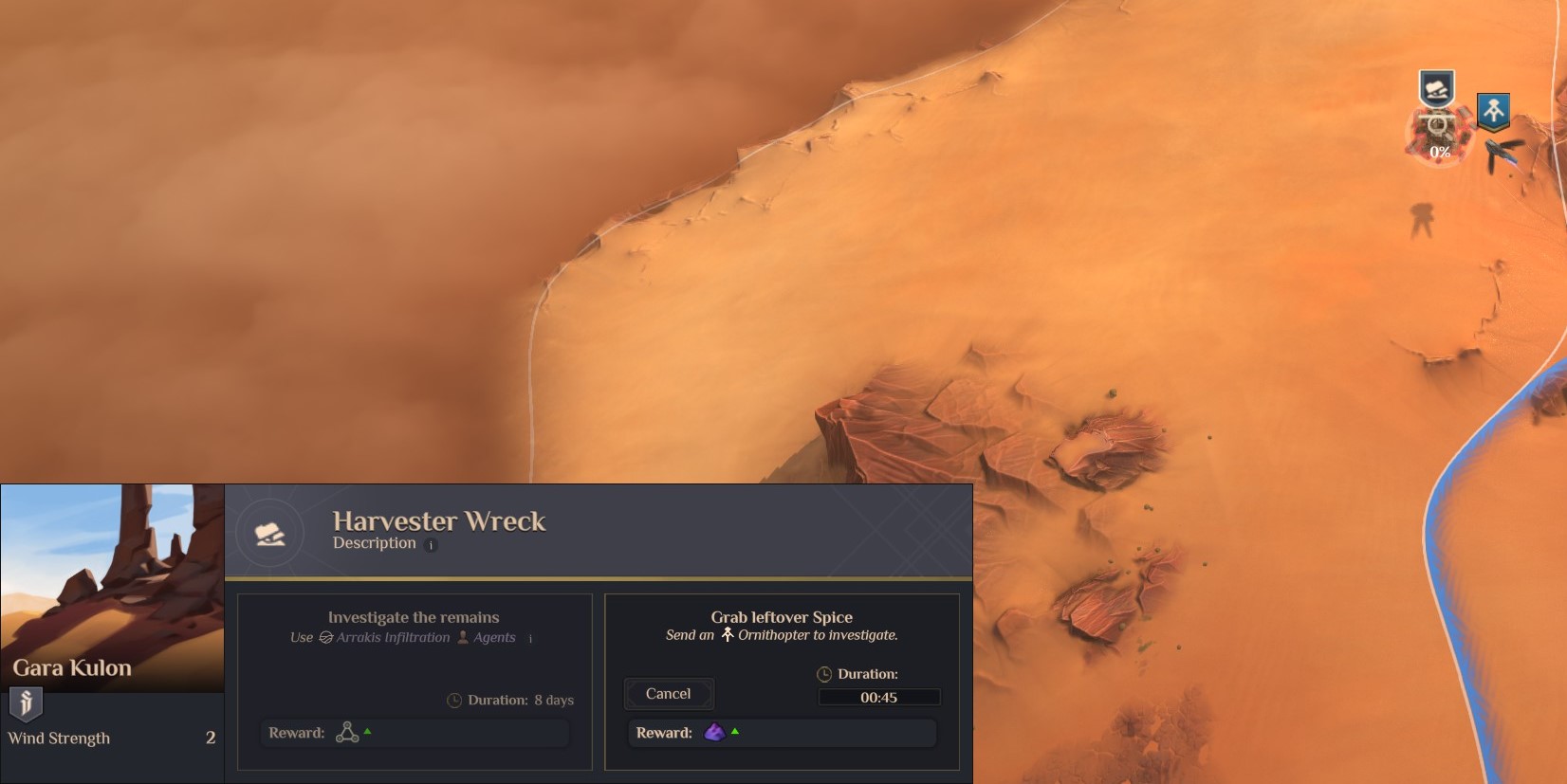 It’s key to discover and use the points of interest that you find, especially in multiplayer. They give you a much-needed boost early in the game and will soon be gone as everyone gobbles them up. Some require you to put an agent on Arrakis infiltration to use them, some require military units to explore them, others need an ornithopter, and others yet are a simple trade of resources. You can even use points of interest to get spice and pay the spice tax/bribe when you don’t have enough from harvesting it. You’ll need ornithopters to find them as they explore the map, so build several early if you have the money and fuel cells for it. 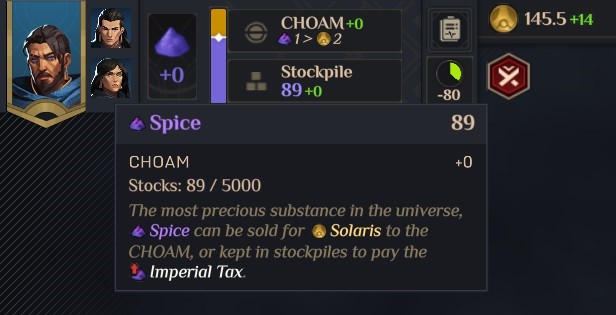 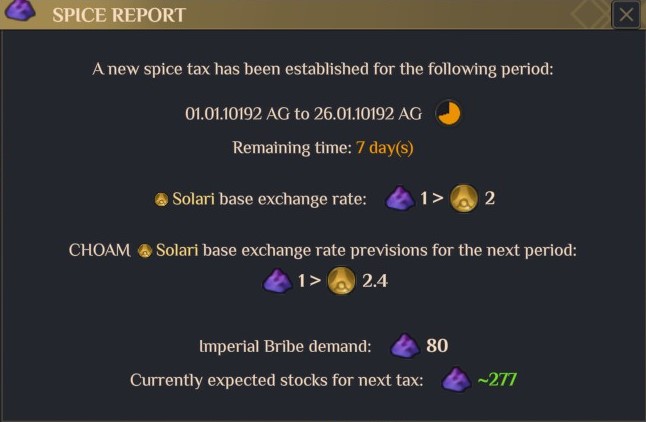 The yellow/purple bar in the top left of your interface is a slider. You can adjust how much spice you store and how much you sell. You can min/max this by paying attention to what the current exchange rate is. If it’s low, you can stockpile spice. If it’s high, you can sell it.

It’s important to pay the spice tax/bribe. Missing it will result in a loss of Landsraad standing or other faction specific penalties. To harvest spice, you need to build a refinery in a region with spice. After it’s built, you have to deploy the harvester which will start collecting spice. 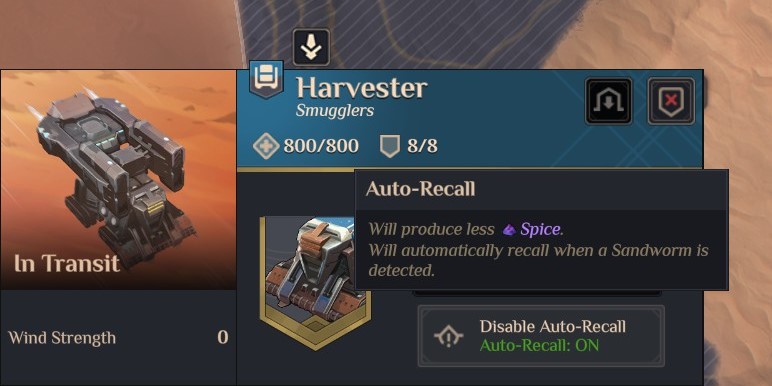 Pay attention to the unique traits of each village. Sometimes they can be very useful to shore up a resource that you currently produce little of. An investment office will add two more stacks of this trait if it is built at that village. 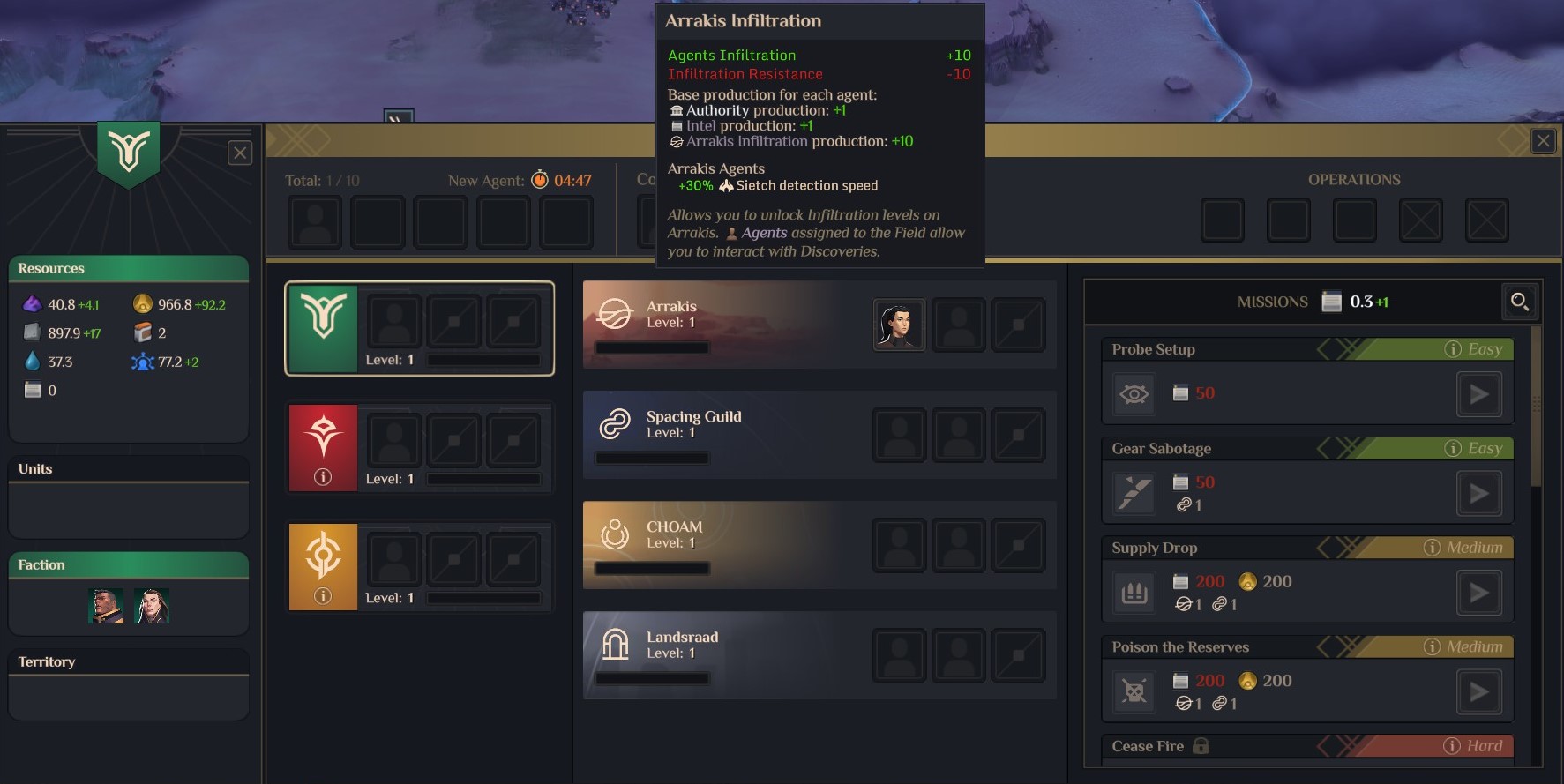 Agents generate intel, other resources, and allow you to do missions. In most cases, your first agent should go to Arrakis infiltration because your authority production will limit how many villages you can capture. The further the villages are, the more authority it will take. You can shuffle agents around freely, just be mindful that they generate infiltration on the faction they’re assigned to. If you move them, that infiltration will start to decrease.

10. Prepare for the First Raid

The locals will occasionally send raids against your villages. The first raid will be just one unit. If your army is otherwise occupied several map tiles away, you could have trouble! One way to avoid this is to build a couple militia units at each of your villages. These cost solari and manpower once, but have no upkeep, and they’ll automatically protect the village from attackers. They’re not very strong, so don’t rely on them to protect against an opposing faction, or even a larger raid in the late game.

If you’re struggling to earn enough spice, you can add crew to your harvester. You start with one slot but can get more through various economic technologies. To do this, click on your harvester and press the add crew button. You’ll need 50 manpower, but it will boost your spice production slightly. 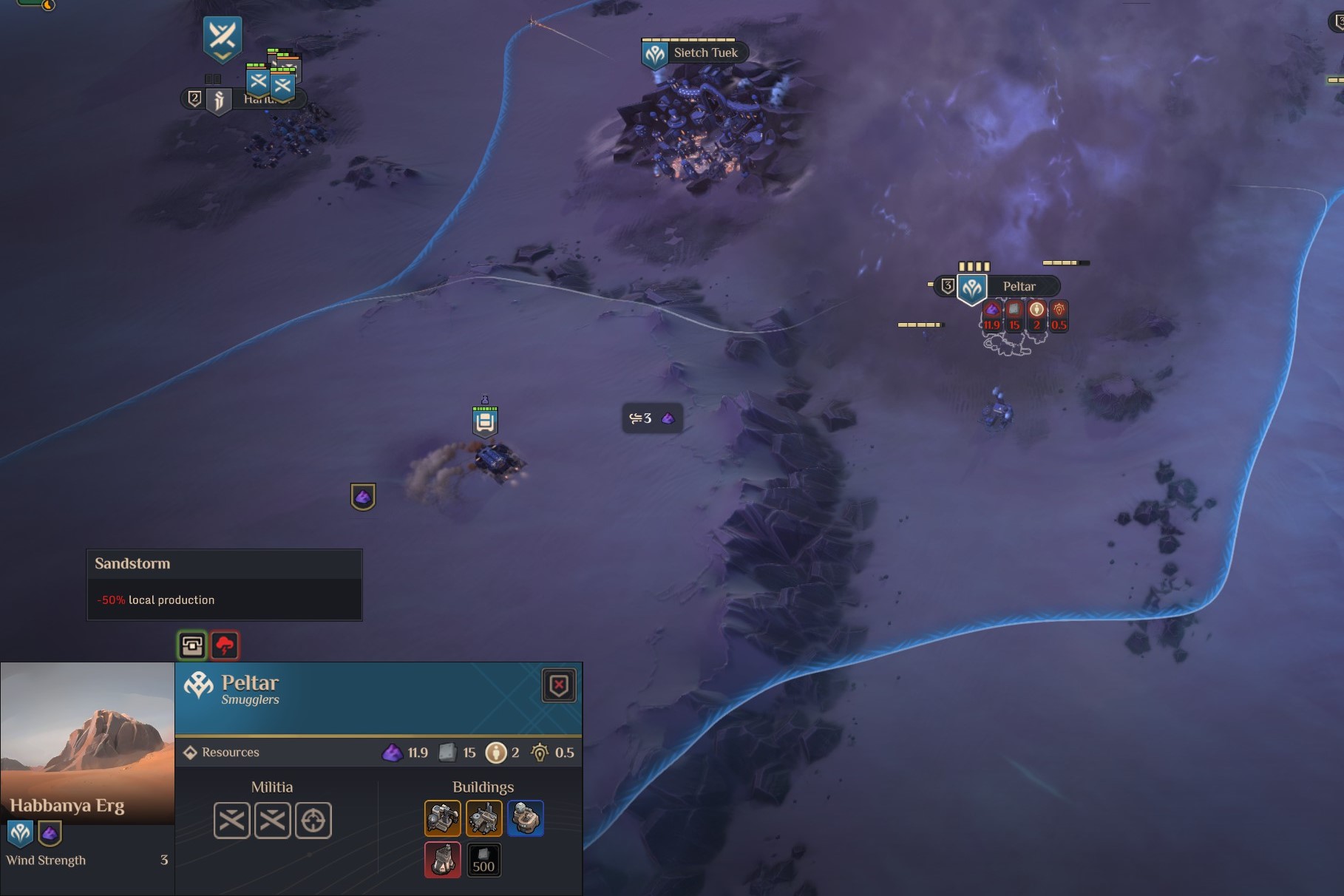 There are many reasons why a resource might have suddenly gone from positive production to negative. One of them is storms. Another is a new Landsraad resolution. Or perhaps there’s a rebellion in one of your villages. Don’t panic. In this game, it sometimes feels like all is lost because of one bad decision or one bad fight. It’s usually not. Take a second, breathe, reassess. If your resources are falling because of a storm, it will go away soon. If you don’t have enough water, maybe you can stop trading with one of the Fremen Sietches. If your manpower is falling, maybe you can reassign an agent to the Spacing Guild. If it looks like you won’t make a spice payment, perhaps you can find a point of interest on the map that will give you spice. 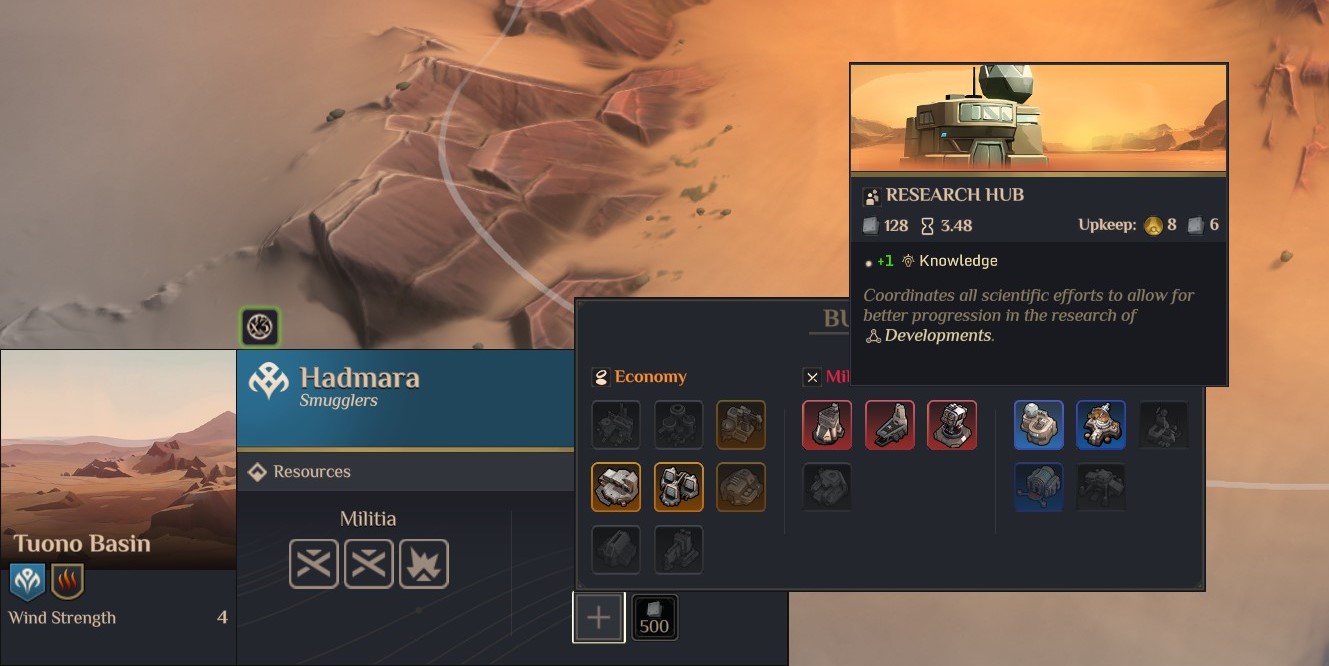 Build some Research Hubs to get technologies faster. If you get ahead of your opponents in research, you will have an easier time maintaining your economy, holding off attacks, and expanding throughout the map. If you do this right, you can really start to snowball.

14. Demolish Buildings You No Longer Need 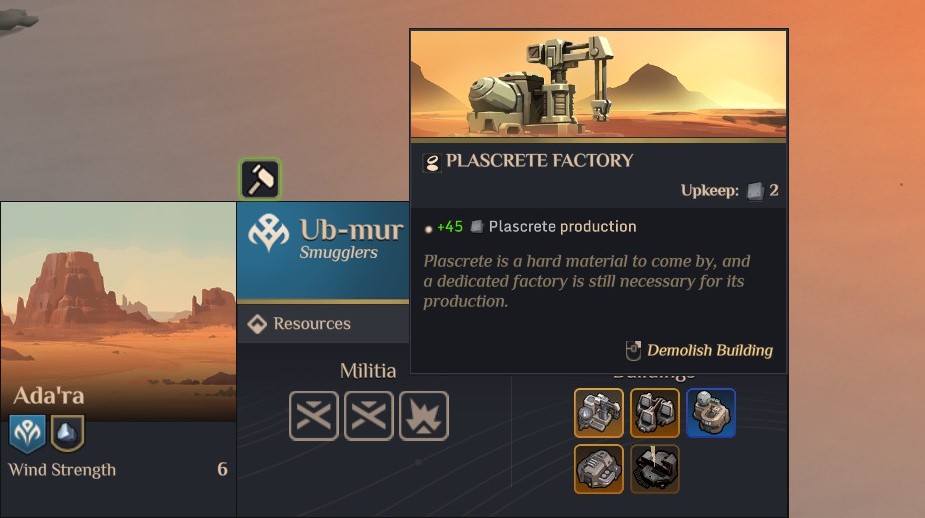 When you reach late game or if you have a resource that is maxed out and you’re still generating a ton of it, you can sell some of the buildings that are making it and replace them with something more useful. Just hover over the building and right click to demolish. 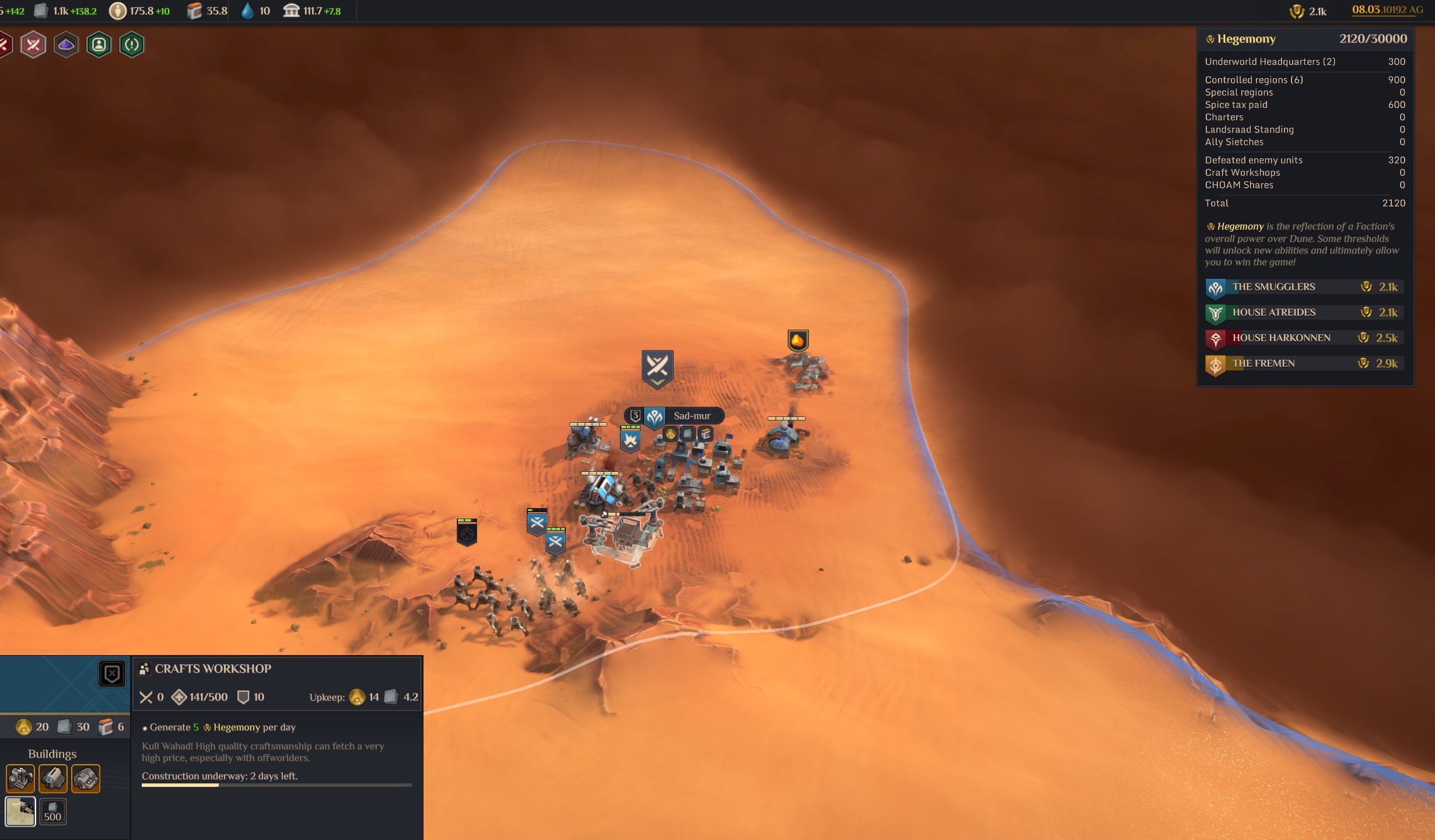 Hegemony gives you bonuses when you reach different levels. At 2k, you unlock the ability to build special structures in your base. They’re expensive but provide powerful bonuses. Filling all the slots with one type of building provides an additional bonus. At 5k and 10k hegemony, you get faction-specific bonuses. Each faction has a unique way to get hegemony. There are also about a dozen different ways to increase your hegemony as you play. Two specific ways that are worth mentioning are special zones (these have a star and a unique bonus) and zones with rare elements which allow you to build a Crafts Workshop. 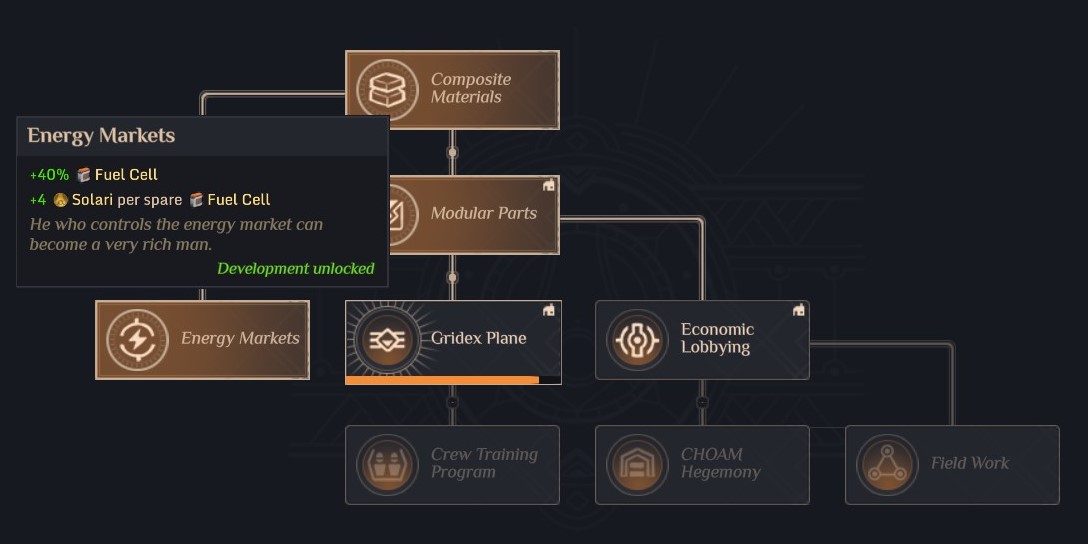 At the time of this writing, the Energy Markets tech is a powerful way for everyone but the Fremen to boost their economy. Building fuel cell factories in every village when you have this tech is a great way to ensure you produce a ton of Solari. 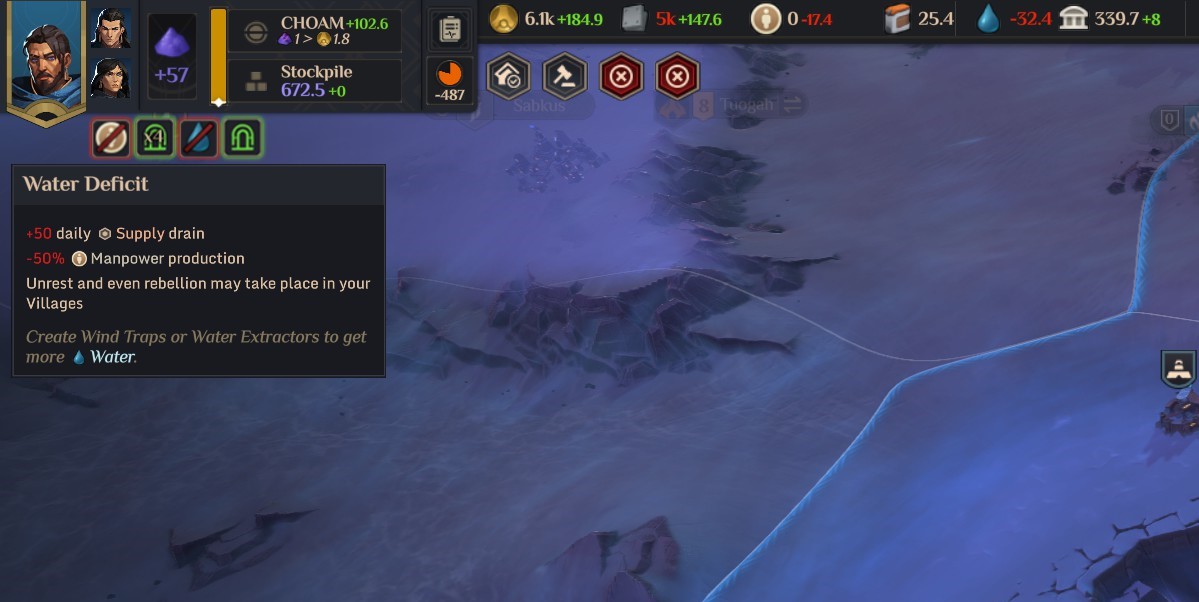 Running out of just one resource can cause a cascade of debuffs which decrease your production of other resources or increase your usage of those resources. If you’re not careful, this can cause a downward spiral that is very difficult to climb out of, especially if it happens early in the game. In one game as Harkonnen, I missed my first spice payment which caused my Landsraad standing to go down. This dropped my influence production to negative. When that hit zero my Landsraad standing started to actively fall. It took a lot of work just to get out of the hole and set me back early in the game. Learn from my mistake. 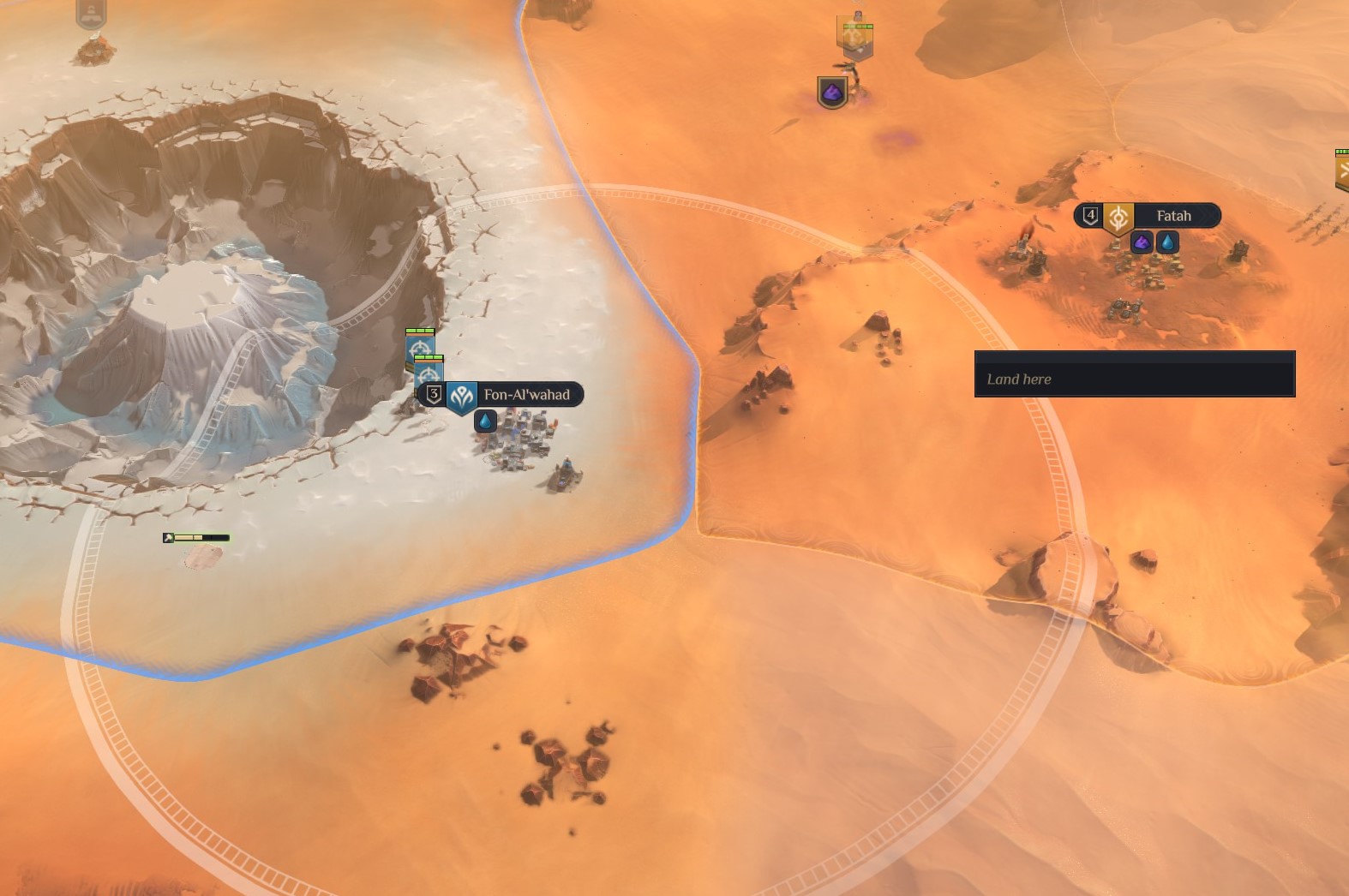 Airfields are very important mid to late game. They allow you to move large quantities of troops quickly and safely across the map. They have a large radius, so take advantage of that to cover multiple villages with one airfield. They can also help units get across particularly nasty cliffs that would otherwise make for a much longer journey on foot. You can even use them to get right up to the enemy village instead of marching through enemy territory and losing supply while being hit by a missile battery.

19. Build Missile Batteries, But Not Too Many 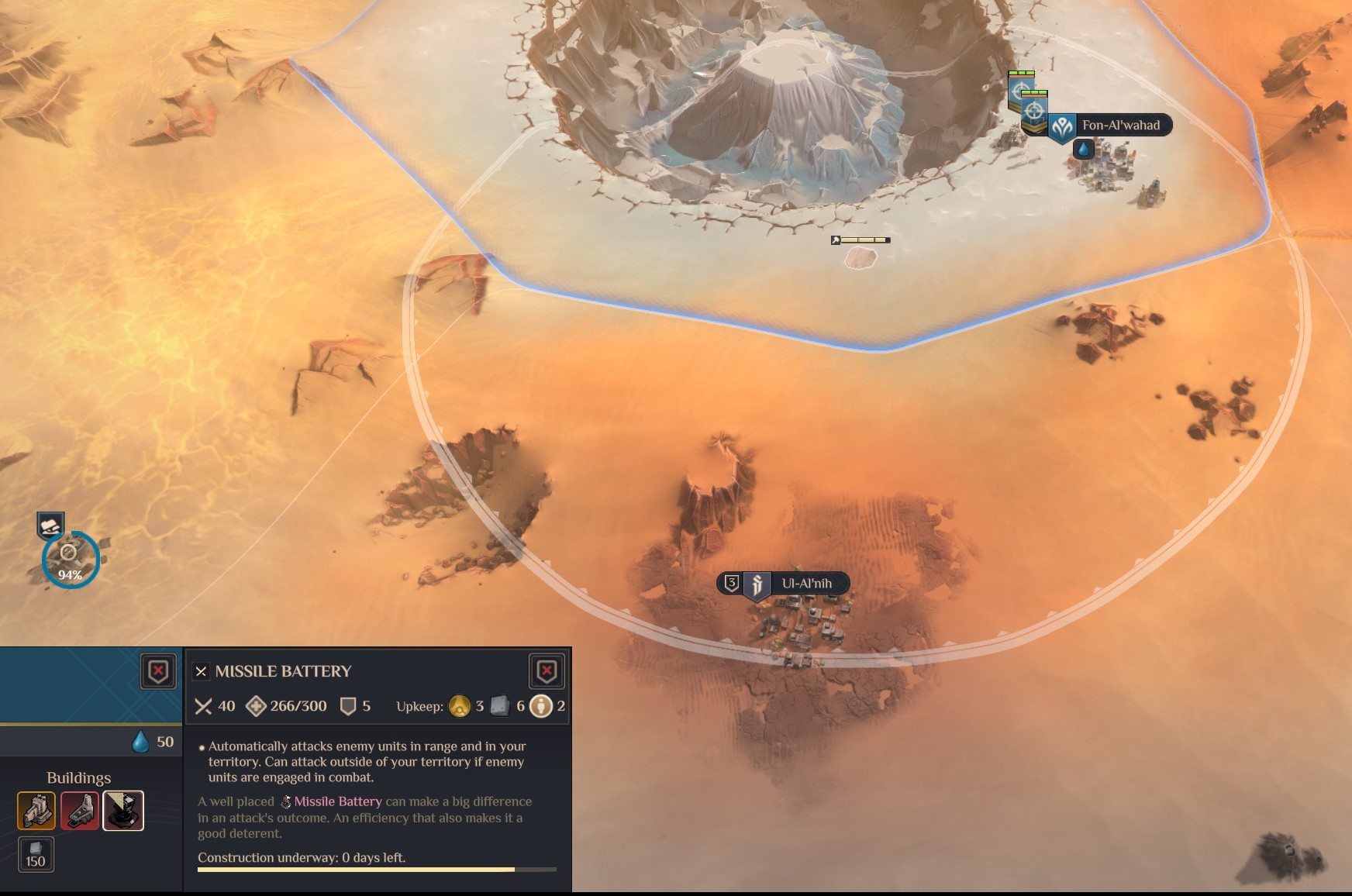 They’re expensive to maintain, so don’t go overboard, but build a few in more strategic locations. The edges of your territory will be the easiest to attack and the hardest to defend so a few missile batteries can help. These also have a large range, which means you can cover multiple villages with them just like airfields. Unlike airfields, it’s actually a good idea to put one in each of the two nearby villages so they can help each other with their overlap. 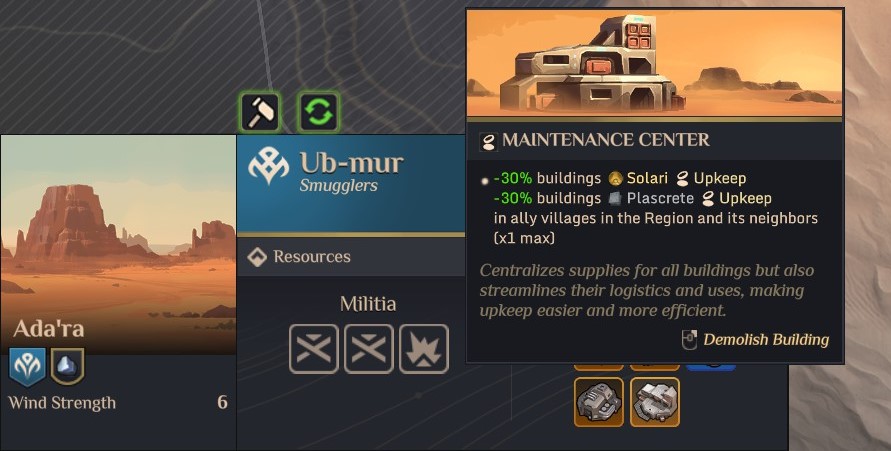 Maintenance Centers, Spice Silos, and Shai-Hulud Temples all affect their own region and all neighboring regions. Find good locations for them and take advantage of the bonuses they provide. Sometimes a maintenance center can cover five or six regions, that’s efficiency! Spice silos can almost always affect two spice fields, so don’t place them in the same region as a single spice field.

Here we come to an end for the 20 Beginner Tips (+1 bonus) – Dune: Spice Wars guide. I hope this guide has helped you with your gameplay. If you have something to add to this guide or believe we forgot some information to add, please let us know via comment! We check each comment manually by approving them!