This guide will help you understand the situations to use each gun and highlight the importance of reading damage numbers while in combat.

I hope you find this guide helpful, knights! If so, please give it a thumbs up!


The Purpose of this Guide

In this guide, we will discuss the pros and cons of each gun while also listing out statistics about each gun. Using this guide, you will also be able to read damage numbers in order to make smart and calculated decisions in game to win more battles.

The revolver you spawn with has 30 bullets at the start of the game. It is the only gun not to spawn in towns.

The revolver and the Glock have the same amount of damage per amount of ammo. This makes the revolver really reliable if a fight drags out for a very long time. Its only drawback is the slow reload speed when you run out of ammo.

When fighting on the road to a town, it is one of the best guns to use for it has a lot of ammo and small amount of recoil. Overall you can go the entire game with this gun without any issues. 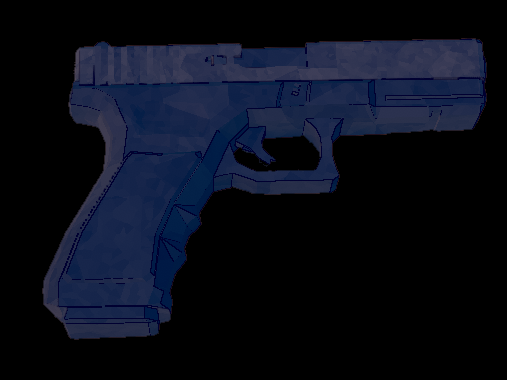 The Glock only spawns in towns and has to be traded for another gun.

The Glock does the least damage out of every gun in the game. Its increased fire rate and mag size makes up for it. The heavy recoil on this gun also makes it difficult to aim at long distances.

This gun is useful at close range. As soon as you acquire this gun, go to towns where there are fewer open spaces to get closer to opposing knights. For example a Town like uphall has many buildings to maneuver around. A gun like this is also good in the big castle, as there is lots of room to duck down and flank other knights.

The rifle does the most damage per shot other than the shotgun. Like the other guns on this list, the rifle can only be found in towns.

A mag size of one forces you to reload after every shot. Although the reload time is relatively fast. Increasing jukes is recommended while reloading.

Towns with open areas and high-points. It is a good gun if you have 1000+ hours on aimlab.

One shot of the shotgun fires six bullets. The distance from your target affects the spacing between the bullets. You can only find this gun in towns.

It deals the most damage of all guns if all six bullets connect. You can kill a person in one shot with this gun if you are close enough.

This gun is similar in use as the glock except you need to be really close to use it. In my opinion the glock is better than the shotgun and if you have the option just swap it out.


Here is an example:


Your knowledge of damage numbers helped you make a decision witch won you the fight.


Imagine if you and your opponent switched roles. Now that you can’t take a shot, you throw a bomb at your opponent, forcing him to doge it, while you have precious time to heal.

First of all, thank you for reading this.

Second this guide will be updated regularly and is not complete. For many of the information is based of off my experience. For example the reload times, range and recoil. They are not in the statistic table for that reason. Another thing is the damage was calculated using the targets out of the shooting range witch hopefully have the same health as the players.


Feel free to correct me if you see anything wrong. It would greatly help out.

I hope you enjoy the A Guide to Guns and Reading Damage Numbers – Knightfall: A Daring Journey guide. This is all for now! If you have something to add to this guide or forget to add some information, please let us know via comment! We check each comment manually!