Guide for all the achievements in NORCO, as I find them at least.

Hi! I’m Dolores. I really really like this game, and I also like achievements! It looks like this game has a pretty robust collection of them to get, so I’ll be marking them down here as I get them.


I cannot thank the devs enough really, this game has been so wonderful so far!

Pretty much unmissable. You’ll get a lot of nodes in the mindmap by clearing out conversations, but one that unlocked a lot early that I think is fairly missable comes from the scrapbook in the living room of your house.

This achievement is gotten by completing all interactions with your stuffed animal in the starting room. It’s also a tutorial for two minigames you can face on your journey, so it’s useful to do either way.

Black Ink of the Mind

Exhaust more dialogue! I had this one done by the end of Act 1, but I’m sure it would be pretty hard to not get.

Unmissable, so long as you keep playing the game!

Near the start of the game, you will have to go to Dimes Discount for a fuse. A person named Troy will stop you from actually entering the store. Exhaust his dialogue, then instead of leaving to get the pills that are in your kitchen, choose to fight him. You do have to win, sorry.

You get this achievement by completing the minigame with Crouton (the cat inside the bookstore) five times. This will make the bookstore owner unfriendly.

This achievement is in the minigame that you play during the puppet show. I found it after a long route on the upper side of the map that took me left. It has an icon you need to interact with, same as the Gator and the Fisherman.

Catherine’s ring is in her masoleum. You need to get the prybar from your backyard (only able to be picked up after the game prompts you to) and return to get it.

Unmissable, so long as you keep playing the game!

I didn’t get the final node until Act 3, so don’t worry about missing one. The final node (for me at least) is of a sunken head, in case you were wondering. Details on it can be found in a note in Duck’s house, but not until after you revisit your own.

After directing the gentleman beside the puppet show to the hot dog vendor, you need to talk to him outside of St. Somewhere’s on your way to the second Garrett Virtual Art Thing. Insist on listening to his story all the way through. Gross.

You need to learn where Dallas lives, and then go there. Talk to Marfa, who will say there’s a gift for him under the tree. Interact with the gift and enjoy!


Don’t worry about spending the extra money to go here, because Superduck will give you an advance to ensure you have enough to travel everywhere you need to on your job.

The meter can be found when you get to the fishing camp. The researchers are in Unit B, so you need to keep knocking until they let you in. You’ll get it by going through their dialogue.

While traversing the lake by boat, after being able to navigate the Ghost Bayou, go to the northmost red X on the map. The sonar will ping, and you will be able to dive to get John’s Head. After making it to John’s Pond, go to the shipping container area on the left. Talk to the outcast Garrett people are gawking at, and then use John’s Head on him.

You will find a monkey plush with sonar while on the way to John’s Pond. In case you miss it, you can find it in the location marked on the image below. 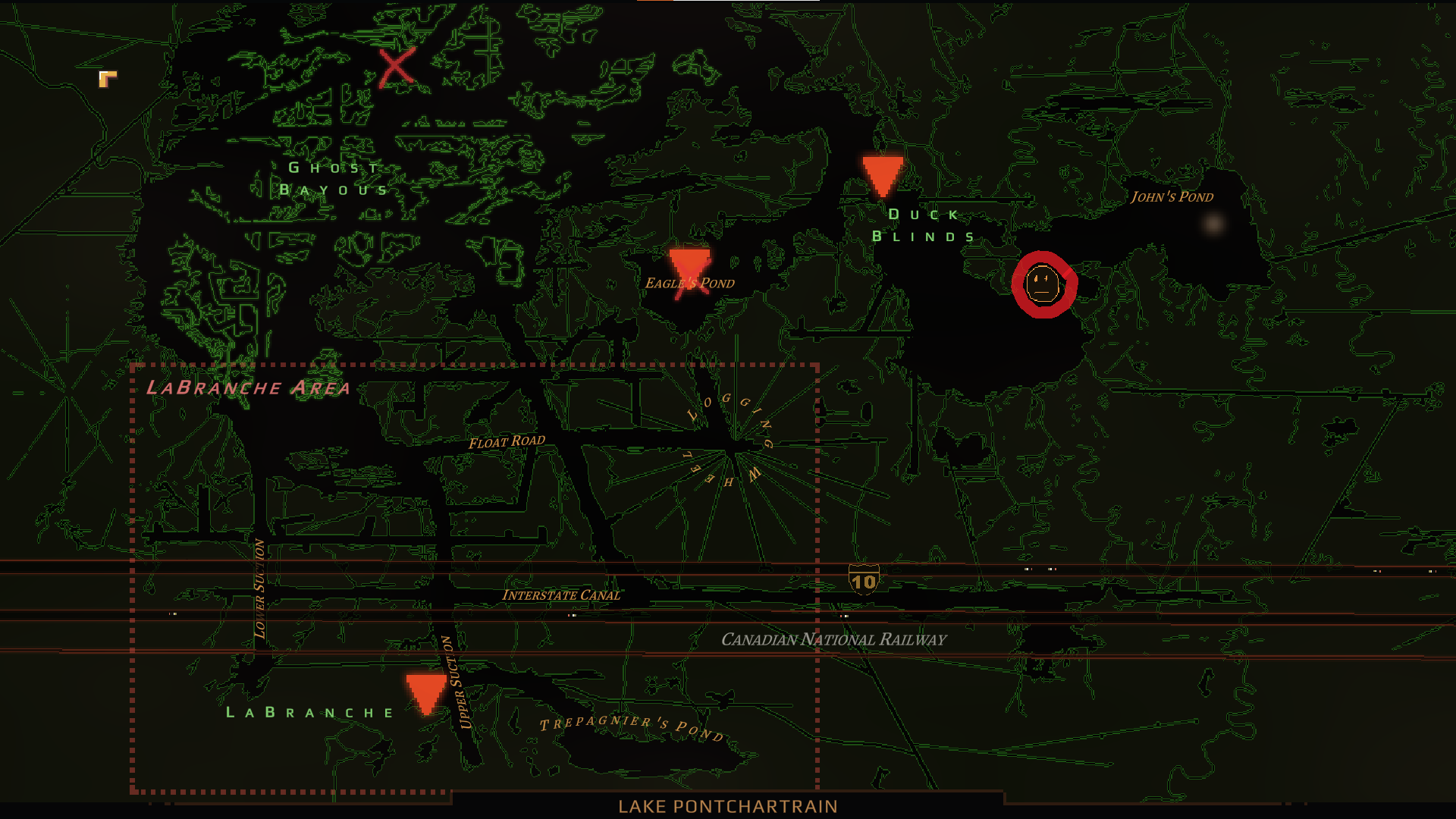 To do this, you need to get inside the mall. You’ll find the shirts in a box on the right side of the screen in the sleeping quarters.

You need to emotionally manipulate Garrett/Bruce in the shipping container at John’s Pond. You can do this by either giving him Wet Monkey, or playing his dad’s voice memo you got from recording it as Catherine. Bruce’s dad is located by going to the mall, clicking on the left, near the car, and then travelling to the suburbs. Make your presence known to the man inside, who will talk about him. Record the bit the game seriously hints you to.

After Laura kills herself in her office once you leave, return and interact with the letter on her desk.

Will you make it out alive?

When you arrive on the spaceship, go to the mezzanine. Choose the right path. Examine the bookshelf. Select the first option.

First, you need to ensure Bruce/Garrett is not in the shipping container. Later, When you’re on the spaceship, reach the throne room after completing the left and right hand paths that unlock it. When Pawpaw leaves the room to launch the ship, untie Blake and your mother and head to the balcony. Interact with the sky, and the reflection of yourself within.

One of the big red X’s on the map you can go to (after talking to the researchers in Unit B at the Fishing Camp) has the remains of Superduck. Use the meter the scientists give you on it, then return it to the researcher on the left.

After Act 2, when you regain control of Kay, you’ll be in LeBlanc’s office. Interact with the face paint on his desk 3 times.

You unlock this achievement by giving a pig some mardi gras beads. To find the beads, you need to get on the boat in the fishing area, and then head down into the little alcove there. The sonar will go off, and you can dive down to get them. The pig man is out a little farther. He can be found in the marked region on your map 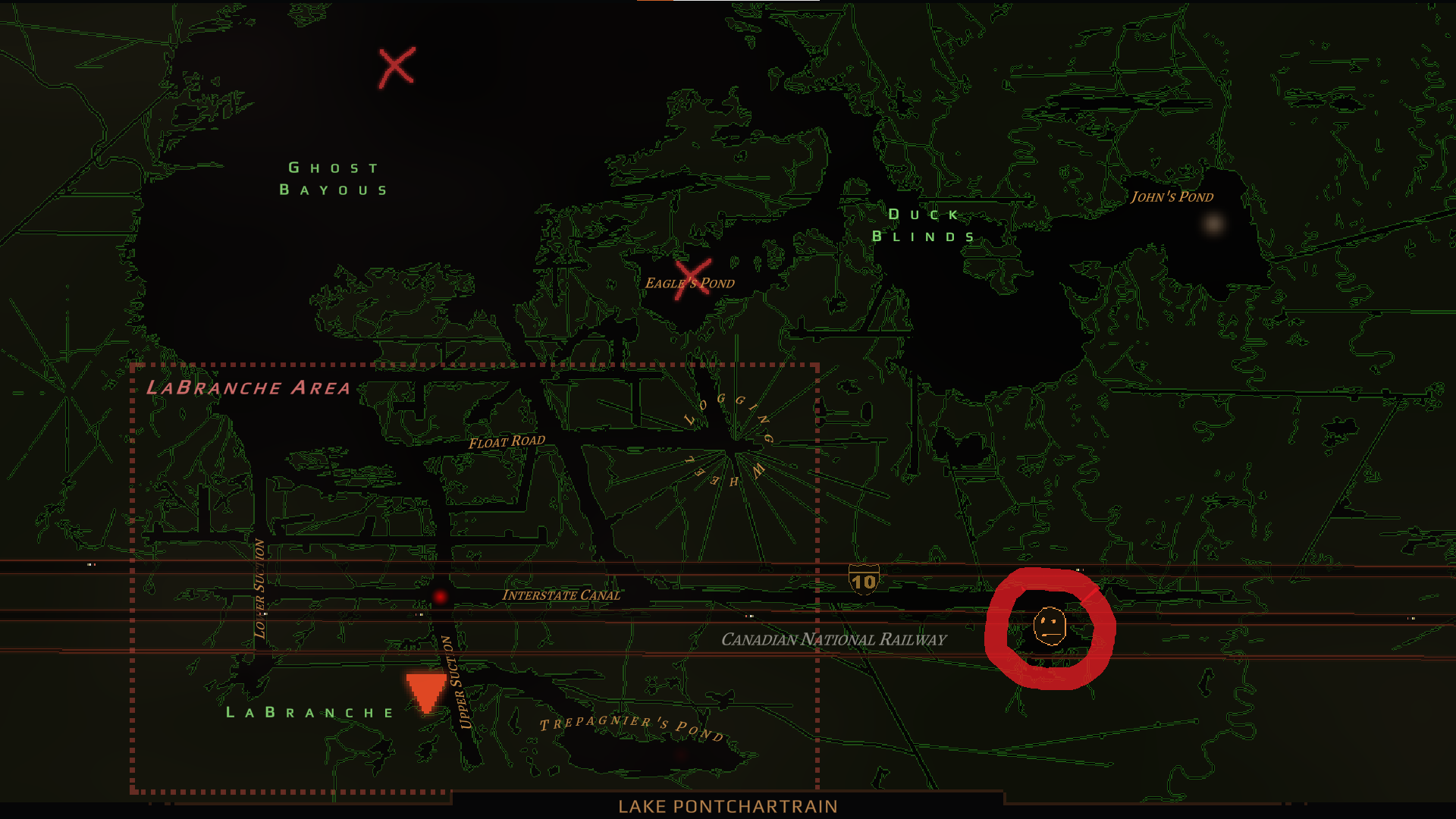 In the above section, you found the Wet Monkey (See: Wet Monkey). Go to John’s Pond, and turn to the shipping container. Knock rapidly until it opens, and then quickly open your bag and use Wet Monkey on Bruce/Garrett inside. This will also trigger Bye Bye Brucey.

When you arrive at the fishing camp, go up to unit A. Knock once, and LeBlanc will mention how your knock isn’t quite up to snuff. You need to knock like that 4 more times, with a dialogue prompt in between each to trigger the achievement.

Before giving the head to the Garrett who is pretending to be Ditch Man, show it to Chuck (he’s the guy with the american flag face mask at the Fishing Camp at John’s Pond).

As of writing, I have beaten the game once. I don’t know how many of these are locked behind alternate paths, but I do know things like knocking out Troy and getting the gift for Dallas are missable. If you have hints on any achievements not listed, be sure to let me know!


And once again, thank you so much devs, for making a very interesting and compelling world, and letting us experience it. Much love!

Here we come to an end for the Achievement Guide – NORCO guide. I hope this guide has helped you with your gameplay. If you have something to add to this guide or believe we forgot some information to add, please let us know via comment! We check each comment manually by approving them!