In this guide I will show you the majority of the achievements which are hard to get.

In this guide I will show you some achivments which are hard to get.

Achievements that you have to do in all episods 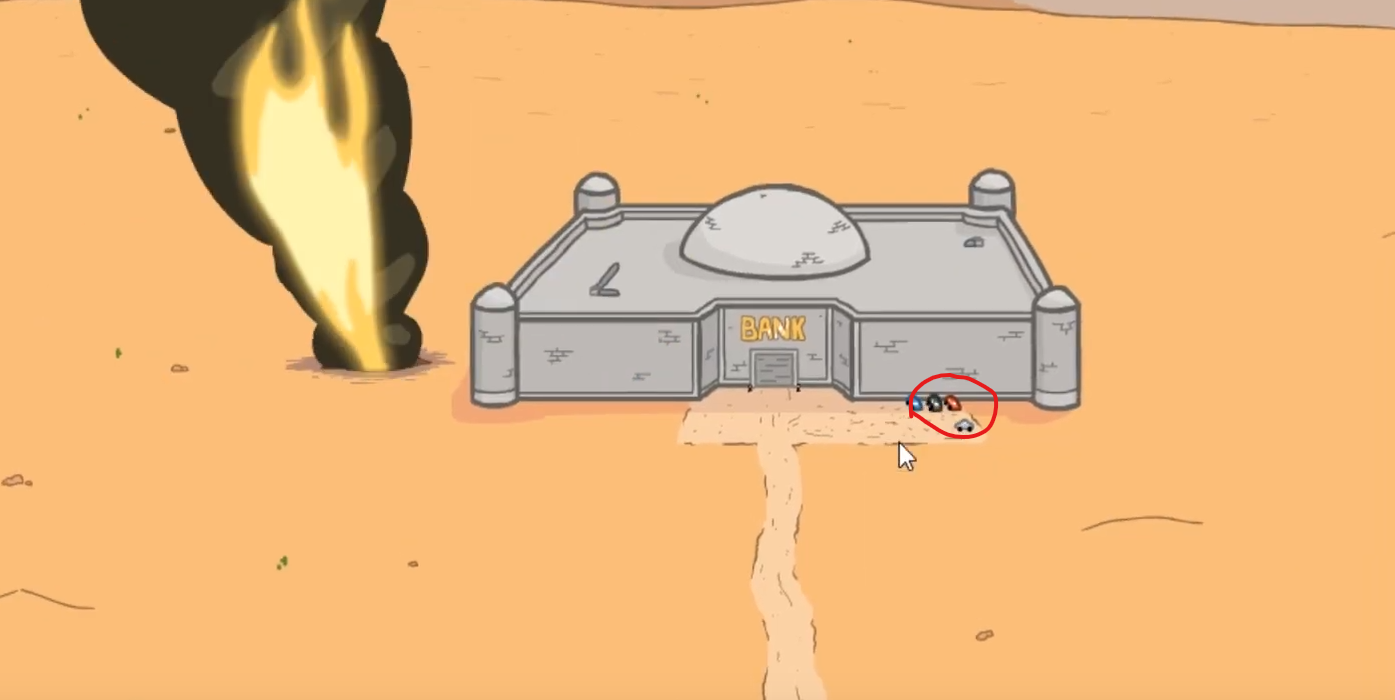 Select “Shovel”. After the explosion, click on the black car to silence it.

Lose 6 points. This can be done by using the Jumble Hoppers 3 times, since the player is deducted 2 points for each fail.

In the fail screen for the Wormhole Rifle, read the long description and click on the word “here”.

During the Fail screen for the Goodball (Pokéball), close at least 3 error windows.

In the final choice screen for Unseen Burglar/Undetected, choose the Snap Neck option, which will cause Henry to fall off the stairs. It’s a reference to the webcomic Sweet Bro and Hella Jeff, a parody comic by the same author as Homestuck.

During the “Pure Blooded Thief” ending, click the gold key under the computer. Henry will use this to free Dave Panpa, who later appears again in the vault and drops a flash drive. Take the flash drive with you by clicking on it. Later, when you have to choose the disc in the CCC base, the flash drive appears along with the disks. Click the flash drive and remember the code, which is always 1-2-1-4.


Then during the “Government Supported Private Investigator” ending, click the keypad that appears after the Vacuum option and enter the code, 1-2-1-4.


Then during the “Rapidly Promoted Executive”/”Relentless Bounty Hunter” ending, Henry will enter a secret room during the chase with the Toppat Leader where he finds the legendary Biggol Sword.

The fail screen for Ninja Star consists of a quote from Mushu the dragon from Disney’s Mulan.

Click the letters M-U-L-A-N in the text to acknowledge this.

During the end credits of “Relentless Bounty Hunter”, click the sun to reveal a Shoop da Whoop.

During the credits of the “Rapidly Promoted Executive” ending, click the Team Fortress 2 logo that appears on the computer screen. This will cause the TF2 Scout to appear and shout “EEEEEEEEHH” and once he has finished shouting, you will get the medal. It’s at the Music portion of the credits.

In the fail screen for the Parachute, click the word “Butterfingers”.

When hiding in the ventilation duct with the electrical defense, choose the option “Make an animal noise”.

Click the word “Banana” in the Banana Bomb fail screen.

Choose the hack option in the “Pure Blooded Thief” ending, and click on the four puns in the fail screen (watt, shocking, current, Ohm).

Find all five appearances of Gary Mann (a man with a briefcase), and click on him each time.


When using the Leaf during the “Ghost Inmate” ending.

After using the Toss option during the “Convict Allies” ending.

After Henry kills Karlov Chernik during the “Presumed Dead” ending.

When using the Earthbend option during the “International Rescue Operative” ending.

When the Toppat Clan is called in the Phone a Friend option during “The Betrayed” ending.


In the moon during the end credits for “Presumed Dead”.

In the moon during the Shadozer fail.

In the Item during the beginning of “Presumed Dead”.

In the “Ghost Inmate” pathway, there are three scenes where Henry jumps and lands flat on his face if the player does nothing, but makes a perfect landing if the player clicks the floor where Henry will land. Get all three of these right:


When entering the security office after Power Jump.

When reaching the docks after using Helium.

After using the Leaf and transforming back.

Find Waldorf. He is hidden in the “Convict Allies” pathway during the final choice screen. He is behind a rock. Click on him to get the achievement.

In “The Betrayed”, after failing to reach the Airship with the Slingshot, the fail screen invites the player to “click here” for an easy achievement.


This results in the player getting about 20 windows with random things on it. Just keep clicking the buttons and be patient to get the achievements. Near the end, there is a trap where the window that states “Don’t click this button”, with initially only 1 button labeled “OK”. Instead of clicking it, wait for a few seconds and a new button comes up. Click that one instead. Failure will result in you being taken back to the title screen.

After choosing the Plunger Boots and failing to get anywhere with them, the fail screen will say “aeiou.” Click on it seven times for all seven sound effects to gain the achievement.

During the hallway standoff in “Convict Allies”, first get the fail where you give Henry the sniper rifle and Ellie the crossbow, which ends with Henry killing Ellie. Then click on the “instant replay” provided in the fail screen. This Achievement is a reference to the “montage parodies” subculture on YouTube and Reddit, who post overly-edited videos of what they claim to be “MLG” (Major League Gaming) and “Dank” (exciting) moments in multiplayer gaming.

Find all 12 hidden Among Us crewmates found throughout the episode:

During the second choice screen for “Free Man”, keep using the Lockpick six times until you get the proper fail.

During the “Toppat 4 Life” pathway, when choosing the Walkthrough fail, end the walkthrough as quickly as possible by spam clicking.

During “Revenged”, after getting the fail message for “Absorb”, click on the Play of the Game words highlighted in blue.

During “Cleaned ’em Out”, after the Mannequin fails, press the “F” key on your keyboard and if this method doesn’t work, click the letter “F” on the actual fail message.

During the end credits for “Capital Gains”, click the setting sun to reveal a Shoop da Whoop.

During the “Triple Threat” pathway, in the second choice screen, use the Swap option 6 times in a row. Charles Calvin will call Henry and Ellie out on their goofing around instead of focusing on the mission.

During “Valiant Hero”, after losing the Hot Knife, click on the “Butter” in “Butterfingers?”.

Get the secret Multiverse Correction cutscene. The procedure is as follows:

Here we come to an end for the Achievements Guide – The Henry Stickmin Collection guide. I hope this guide has helped you with your gameplay. If you have something to add to this guide or believe we forgot some information to add, please let us know via comment! We check each comment manually by approving them!