This guide chronicles the adventures in 2w2b, a Worldbox map by ImageMan! 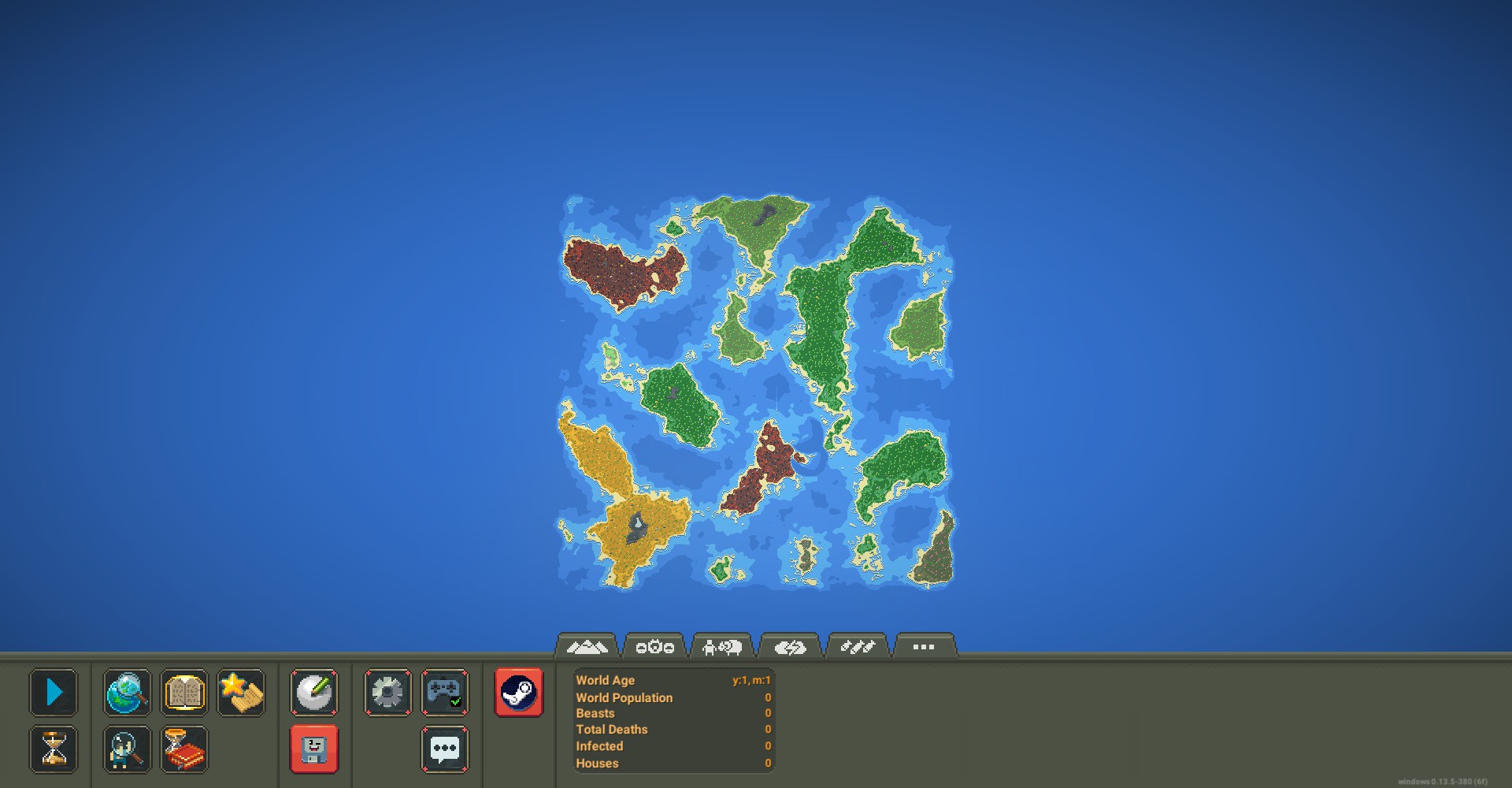 This is the World of 2w2b (The name based upon 2b2t (2 builders 2 tools), the infamous anarchy Minecraft server. This name is 2 worlds 2 boxes, however there is neither 2 worlds nor 2 boxes). Here, nothing has happened. No years have passed. It is a fresh, new world. Until… 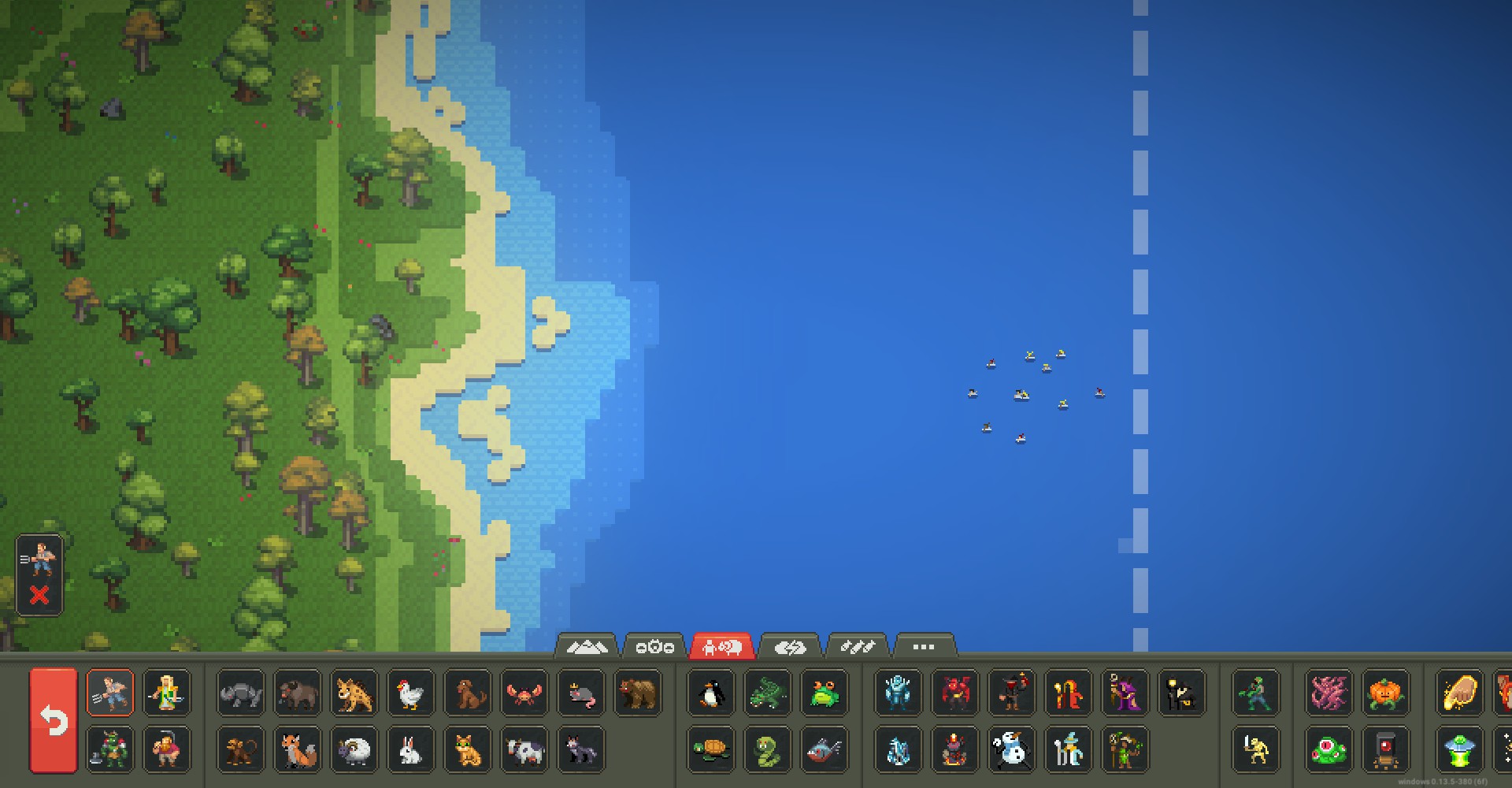 From the East comes 12 brave wanderers of lands, seeking a new world to explore. Their names, at least the names of the more important ones, are… 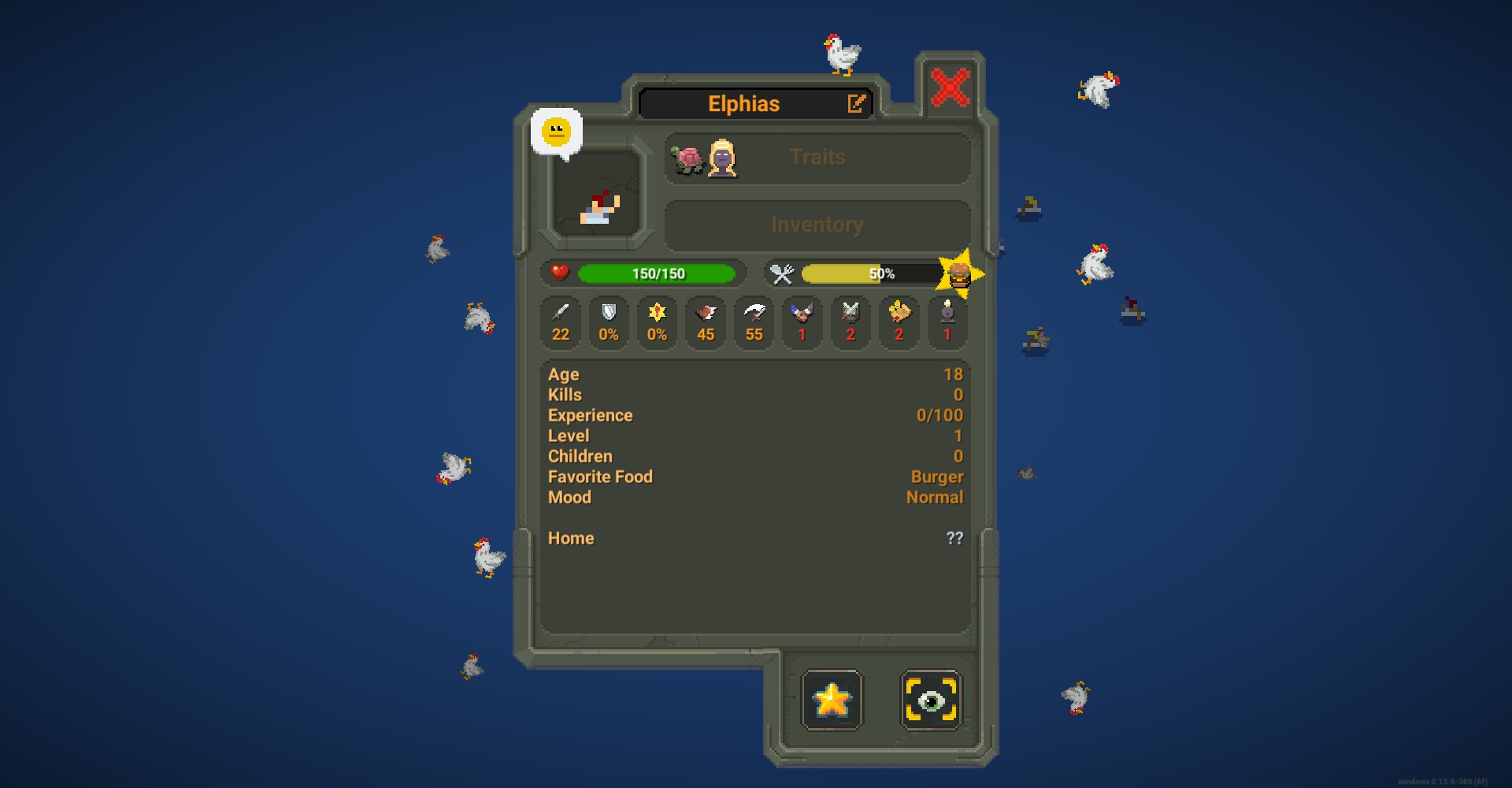 Elphias (Elf-Eye-A*s), the Slow. His sluggishness will give the others motivation to be faster than him. 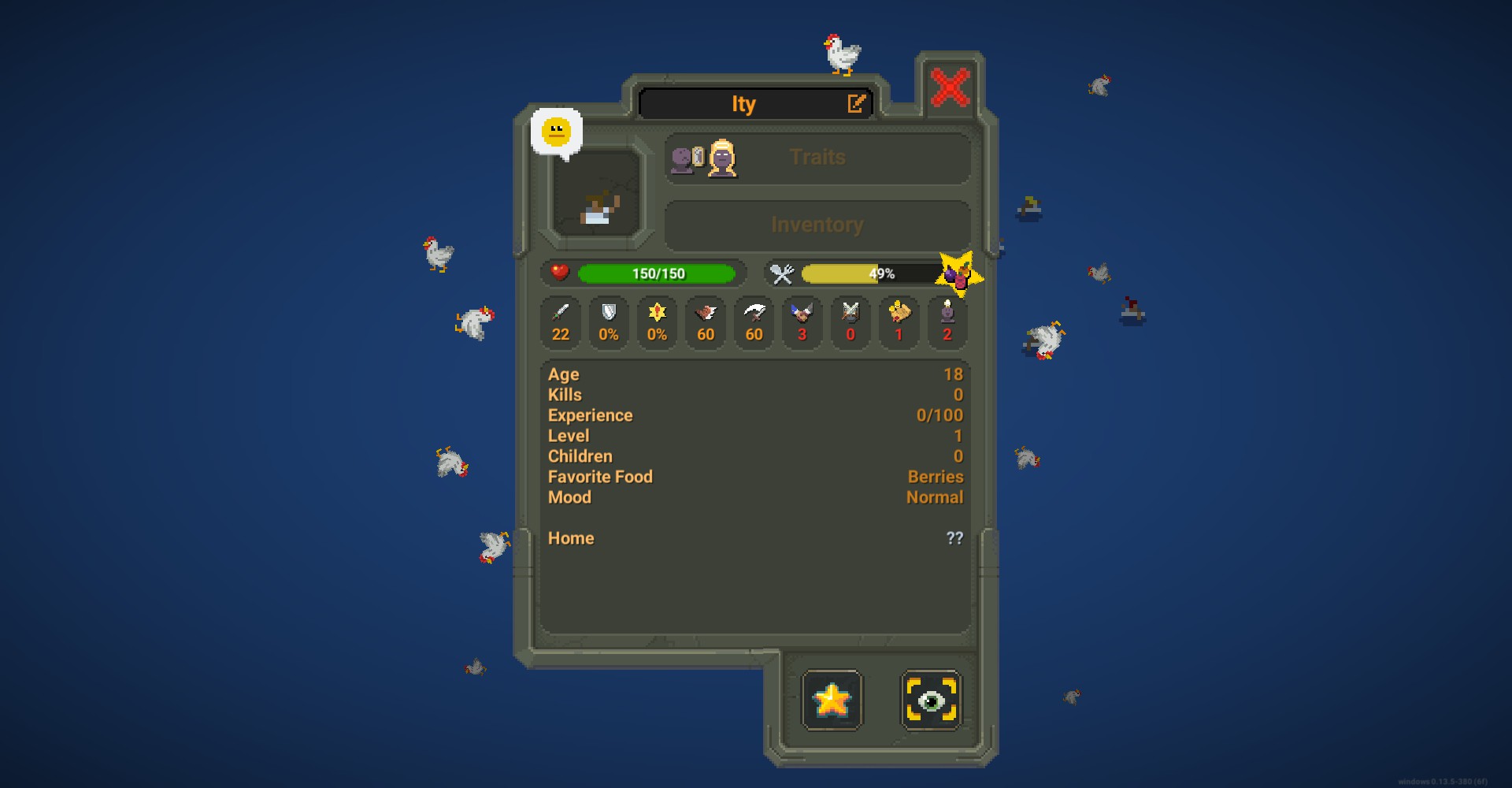 Ity (Eh-Tee), the Ugly. Her ugliness will give the others motivation to be more beautiful and handsome than her (and accept other people that look different I guess whatever) 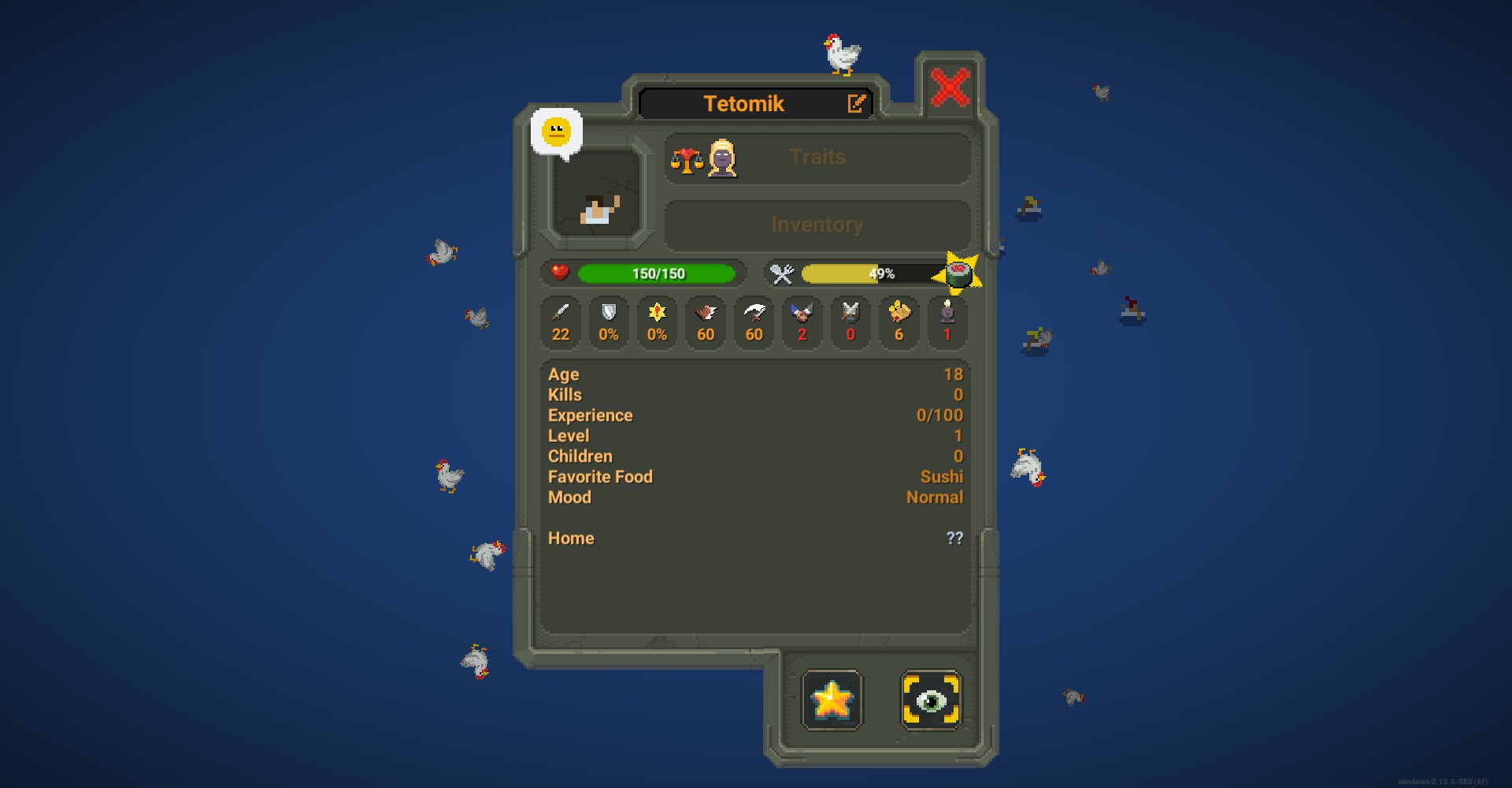 Tetomik (Teh-Toe-Mike), the Honest. His honesty will prove a learning point for all others to not lie. 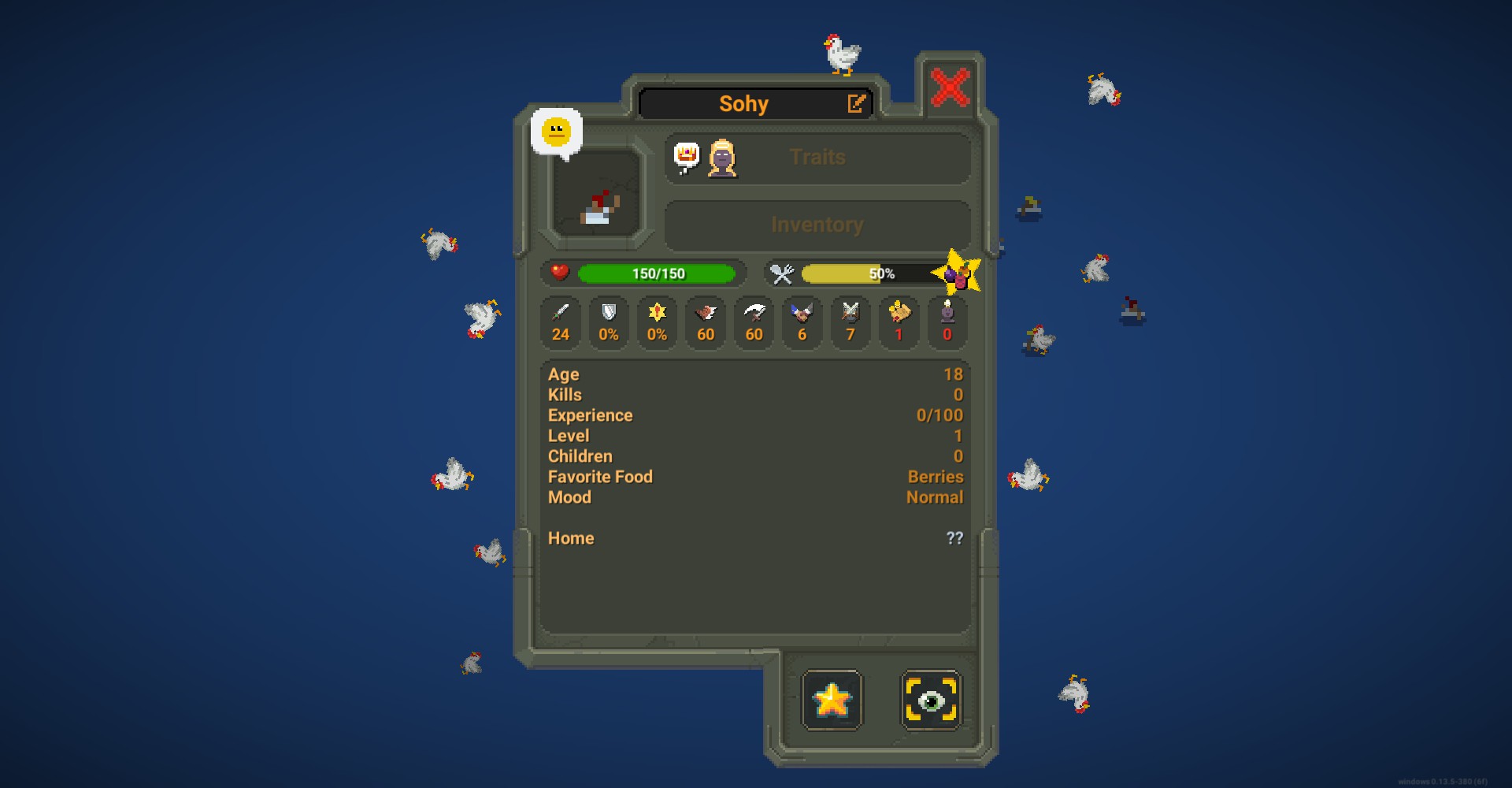 Sohy (Soe-Hee), the Ambitious. Her ambitiousness shall lead the others to the ends of the Box! 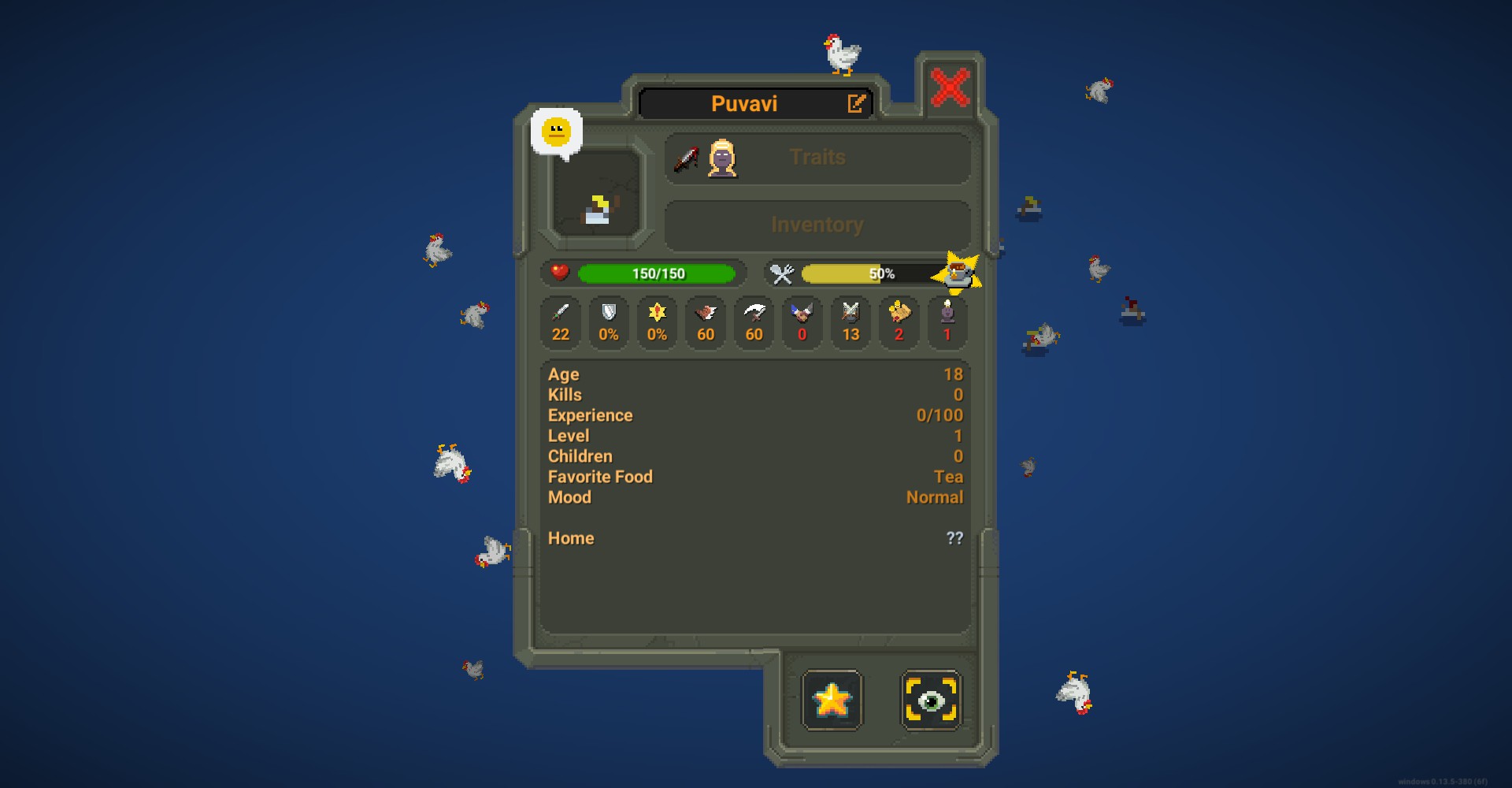 Puvavi (Poo-Vah-Vie), the Bloodthirsty. His bloodlust will hopefully not transfer to others… 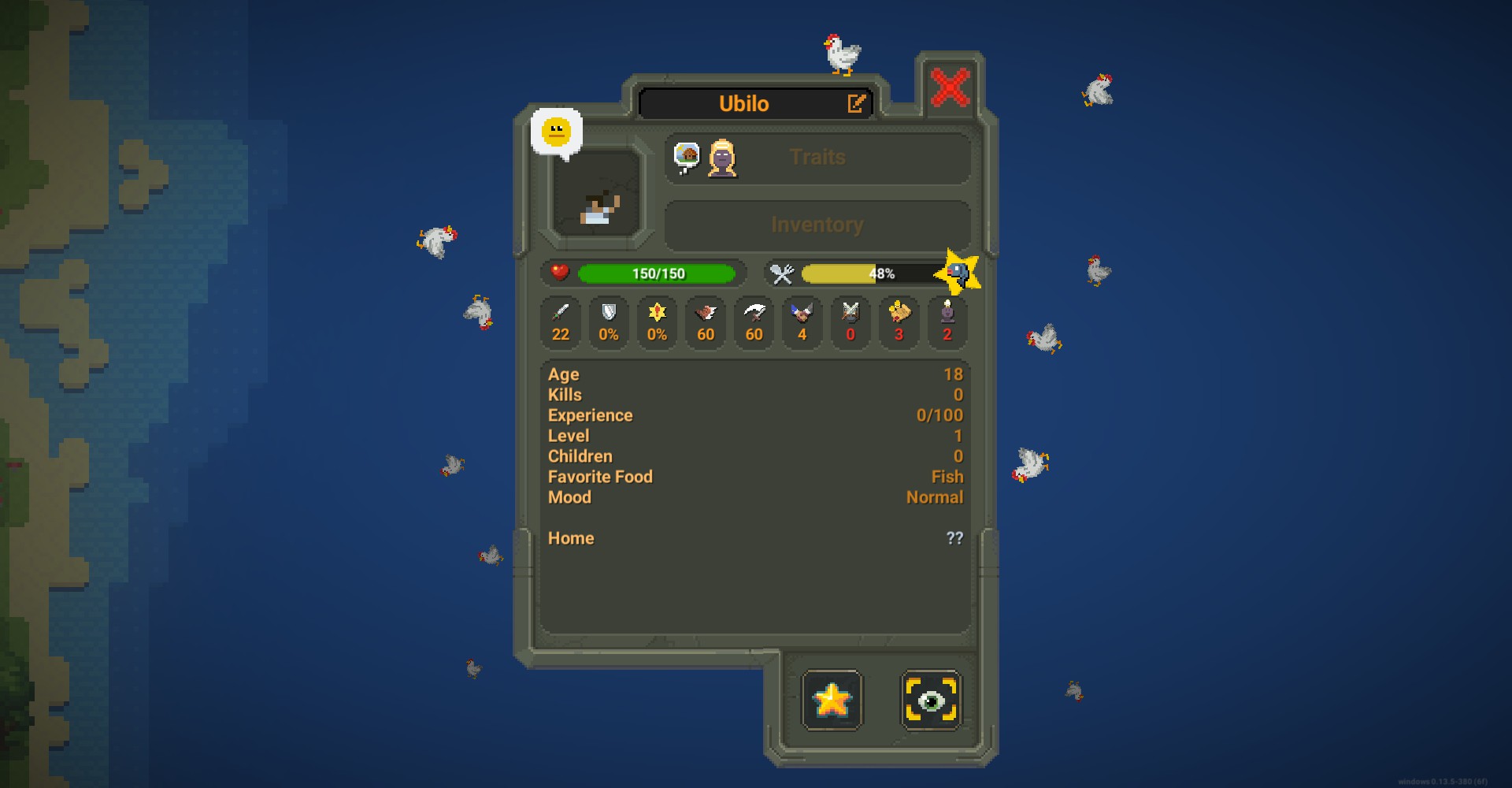 Ubilo (You-Bill-Oh), the Content. His contentness will probably be obstructed by future achievements.


Others that have joined the Expedition include: 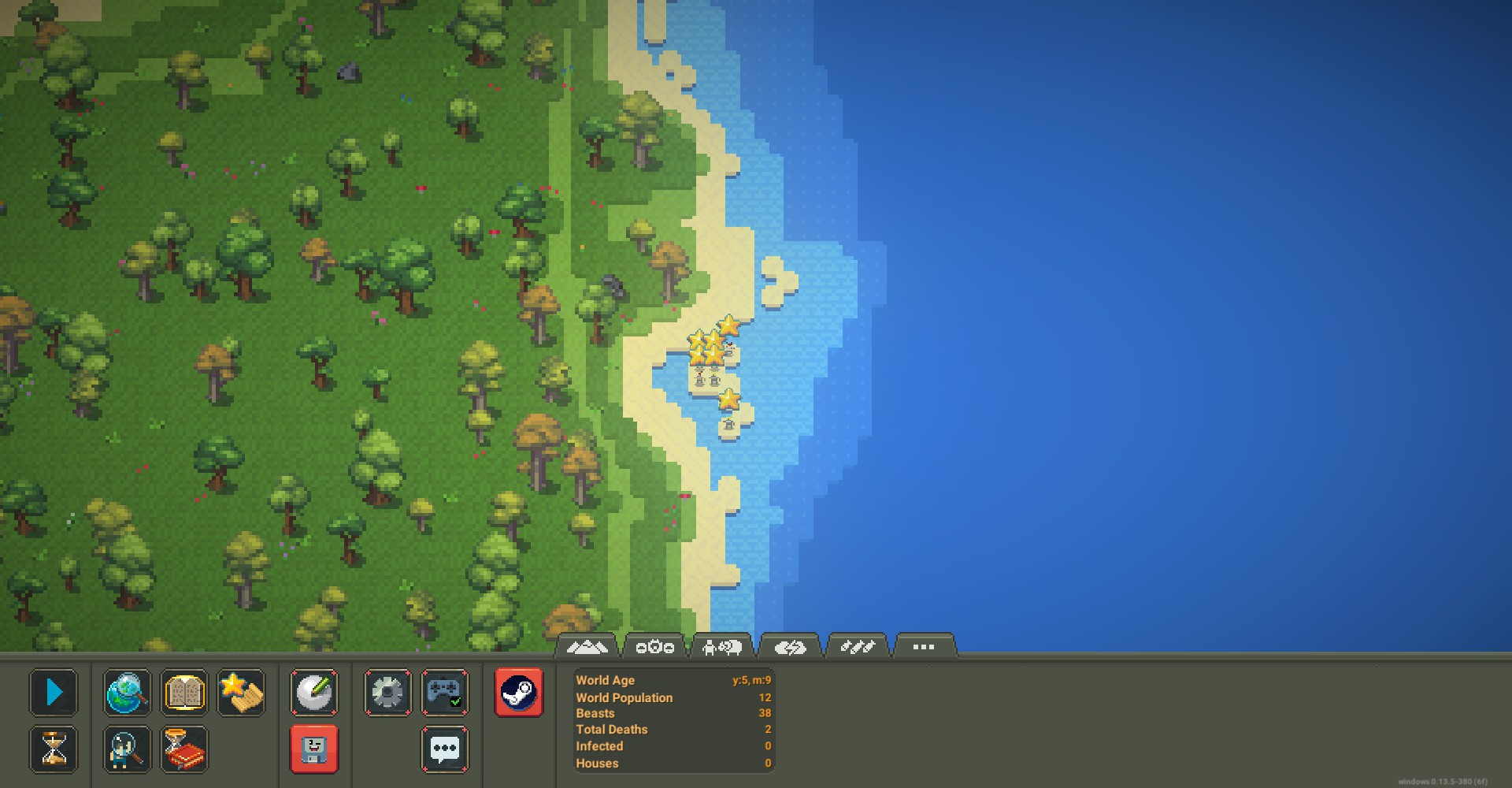 In 5 years and 9 months, the posse have made it to a new world. On a small, grassy island which they now dub, a year later, as… 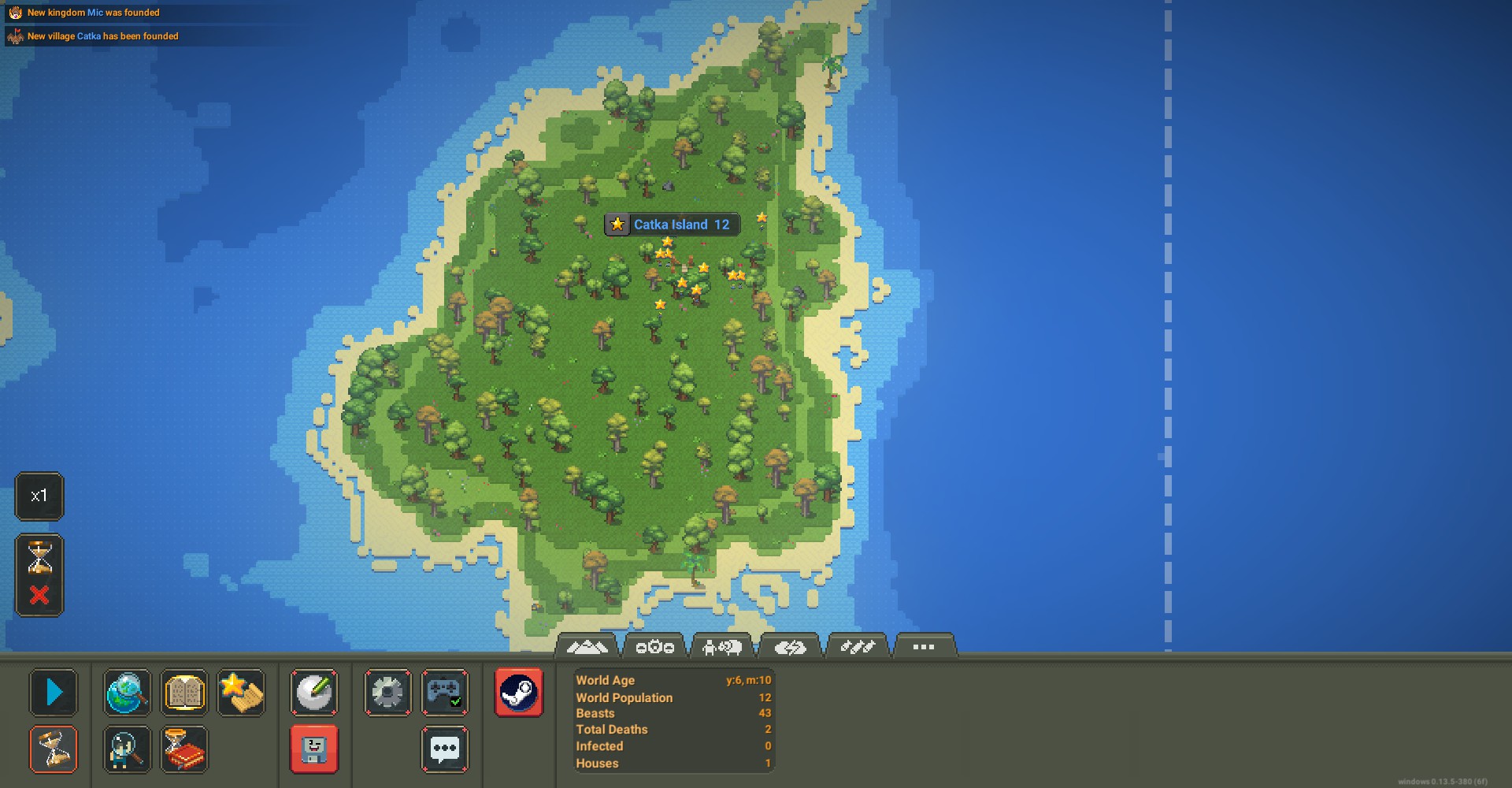 Catka (Cat-kah) Island. Its fertile soil will be able to hold generations of crops, and therefore generations of men and women. And so the people of the kingdom of Mic begin their adventure in the world of 2w2b, beginning the First Age.

Puvavi has become King of the kingdom which he has now renamed Miccan. The new motto of the kingdom is Blood and Darkness (reference to Hades). Meanwhile, Sohy is now the Leader of the village of Catka Island. The people of town have also now created the culture of Klomerab. Tetomik has been appointed Priest of Klomerab.

Many new citizens of Catka Island have graced its lands, its population blooming like the flowers in the springtime. The more important ones are listed here:

The Klomerabians have evolved from the usage of tents to houses. They have also evolved to spread more culture to other cities and civilizations, though there is none to spread too.

Gakaa (Gah-Kaa) has been appointed Catka Island’s Town Chick. He grows up to be a strong one.

Catka Island’s original Blessed 12 have begun to age, turning wise with the flow of time.

Over time, the Klomerabians have become able to swing much sharper axes at trees.

50 years have passed, and the Blessed 12 have begun to fade into dust.

The Klomerabians have begun to travel the seas.

A century has now passed.

With golden tooth in hand and bloodlust quenched, Puvavi, King of Miccan, dies, after a 59-year reign. Sohy, Leader of Catka Island, falls dead as well. Ashiwune the Tough succeeds as king while Sum the Deceitful succeeds as Leader.

Now ambitious in the reign over his kingdom, Ashiwune renames himself to commemorate his fallen mother: Sohy II. Though Ashiwune is a male, and Sohy was female, as well as Sohy not being a king nor queen, he sees no wrong in it.


The Assasination of Sohy II

75 years have passed since the beginning of the First Age and Sum is saddened by his age and his inability to rise further and become king. So he goes mad and plans to assasinate Sohy II.

However, Sohy fights back and they duel it out. Sum is slain, but rises once more as Unsum and continues to fight.

Though Sohy II rises as the victor and keeps the crown, he feels sickness pour into his wounds.

After regaining his strength, he realizes that he has been infected by a Plague. He stays away from his kingdom, so as to not spread this virus, and so he forces himself to go mad and flees to a nearby chunk of land and dies there.

Ychynoshe dies after a 22 year reign and Chaly succeeds him. Vyshuw (Vie-Shoe) the Ugly and Deceitful replaces Chaly as Leader of Catka Island.


Downloads will be available at the end of Every Age

I hope you enjoy the Adventures in 2w2b – WorldBox – God Simulator guide. This is all for now! If you have something to add to this guide or forget to add some information, please let us know via comment! We check each comment manually!