Unintended division of power and life support grids. How it happens and how to avoid it.

What are we actually talking about?

It may happen that during the game you suddenly notice that one or more buildings are without power, although enough power is being produced. It gets even more curious when you realize that there is enough power in the grid, building connected to. If you then check the colony power or life support overview, you will find grids that have consumption value 0 and production value also 0. This abnormal behavior also applies to life support systems.

How can this situation happen?

For example, a building is connected to a power cable. Later you want to move the connection point. To ensure that the power supply is not interrupted in the meantime, the power connection is made at another location and then connected to the existing line. This is exactly what you should not do, but first separate the already existing grids, so that a warning appears “Split power / life suport grids” appears. Only when you receive the warnings, you can connect to another site. If you avoid the “Split power / life suport grids” warning, disconnected grids may still be created, but they will not be visible. If you are lucky you will notice this quickly.

Example of a situation from my game 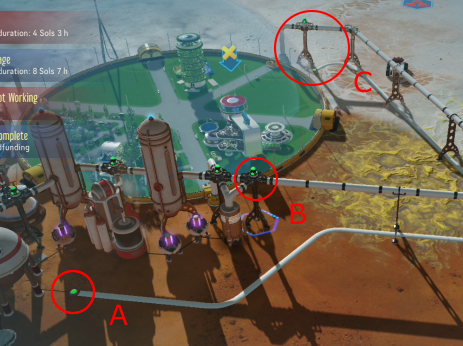 Some time later, after connections A and B have been removed, the Hydroponic Farm E building is without power, D although the electricity is still present. 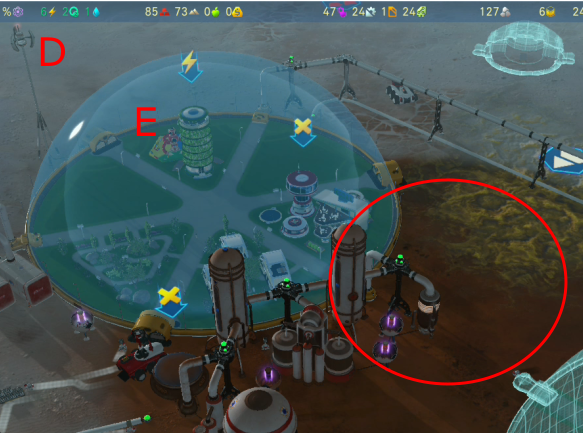 During troubleshooting, it was discovered that hydroponic farm E now has its own power grid! If you now click on grid 1, exactly this hydroponic farm is selected, any other buildings are in grid 2.

The same behavior can happen if e.g. domes which are connected to shared life support or power grid. Become later connected with a passage and the old life support / power line is removed.

Before adding a new connection (power, life support, dome passage) to an existing network, the old connections that are no longer needed should be removed beforehand. Set up a new connection after the warning ” Split power / life suport grids”.

Here we come to an end for the Adventures with hidden disconnected power and life support grids – Surviving Mars guide. I hope this guide has helped you with your gameplay. If you have something to add to this guide or believe we forgot some information to add, please let us know via comment! We check each comment manually by approving them!