A guide to completing all achievements within Cult of the Lamb. Most achievements can be combined, so you'll need to farm resources in order unlock everything. The game has one unlocked achievement.

The first story boss. Darkwood is the location. It is rare to kill the boss without taking any damage. You can take damage by exiting to the main menu.

The third story boss. Anchordeep. It is rare to kill the boss without taking any damage. You can take damage by exiting to the main menu.

The fourth story boss. Silk Cradle. It is a missed achievement to kill the boss without taking any damage. You can take damage by exiting to the main menu.

The last story boss is the one that you must kill. He will then open the gate for you.

Missable achievement. One player will die if they don't complete one quest. You can play at Knucklebones by visiting the "Loney Shack", which will open during the storyline. To make new players, invite them during arena clearing.

Pilgrim’s Passage area is the fishing spot. You must immediately give the fisherman the catch. The fisherman will then take one fish of each type. You will be given a Holy Talisman Shard, which can track all kinds and types of caught fish.

The lighthouse can also be found at Pilgrim’s Passage. To light it, you need 15 logs

Clearing arenas will allow you to meet characters with whom you can have a conversation. They will mark locations on the map where you may meet them later. At least four arenas are required to meet a single character.

You can find followers by killing minibosses. As you travel through the arenas, there will be many options for you to choose from. The icons that indicate followers on the map are the icons for the respective icon. There is an arena to save the follower and a neutral place where you could buy a follower currency. In the fourth chapter of this storyline, there will also be a spider near the gate from where you can buy followers. To complete the game, your followers must be at least 20.

You can prepare the food in your kitchen.

You can sacrifice your followers in the story, during Darkness sidequests, or in Midas's Cave.

In the chapel, doctrine can be created. You will need to collect 3 parts. The seal can only be found in arenas, chests, side quests, and after each follower's loyalty level increases. A red icon will appear above each follower to indicate that they can level up. You can raise your level:

Holy Talisman chapel creates Fleece. Holy Talisman are made of the four shards. They can be used to complete side quests. You can get a Darkness quest if you sell all kinds fish to a fishingman, or if all Darkness quests are completed. After the story is finished, you will have the ability to continue the arenas indefinitely. Once the arena has been completed, you'll find an Eye of the Witness inside the chest. This Eye of the Witness must be given to Smuggler's sanctuary.

You can unlock one weapon by increasing the level of your sermon. Sermons are delivered in the chapel.

At each location, you can buy three skins: Midas's Cave or Pilgrim's Pasage, Smuggler's Haven, Spore Grotto, and Smuggler's Safety.

It is necessary to complete Darkness's quest for unlocking the skin. You will need to go at night to each of the four locations and meet the conditions of Darkness. The screenshots below indicate the locations required. Locations required: 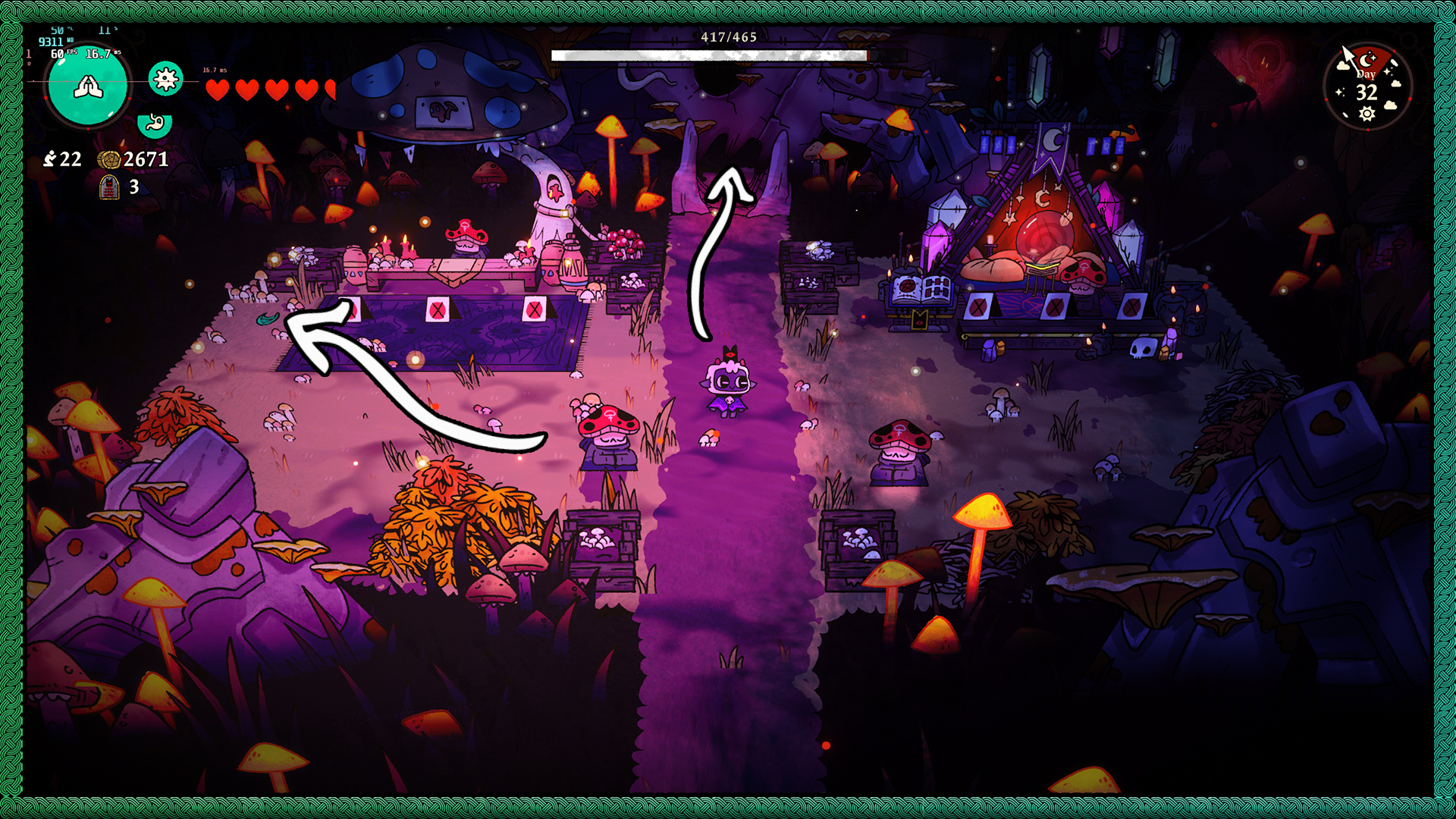 Behind the gold hoard on right, there's a hidden skin.

You can catch a crab here, and it will run all around the dock. 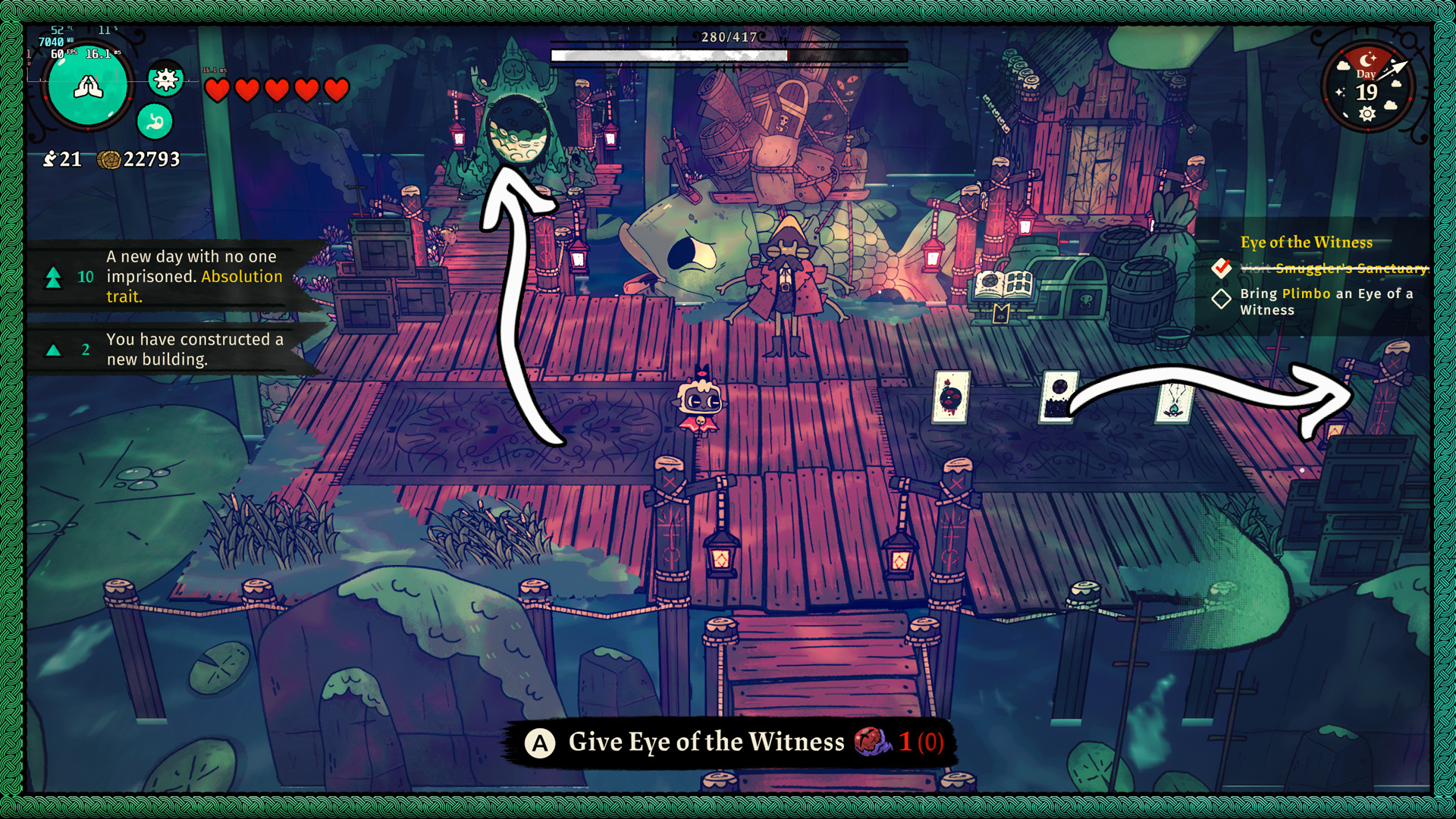 To the left is the hut behind the logskin. 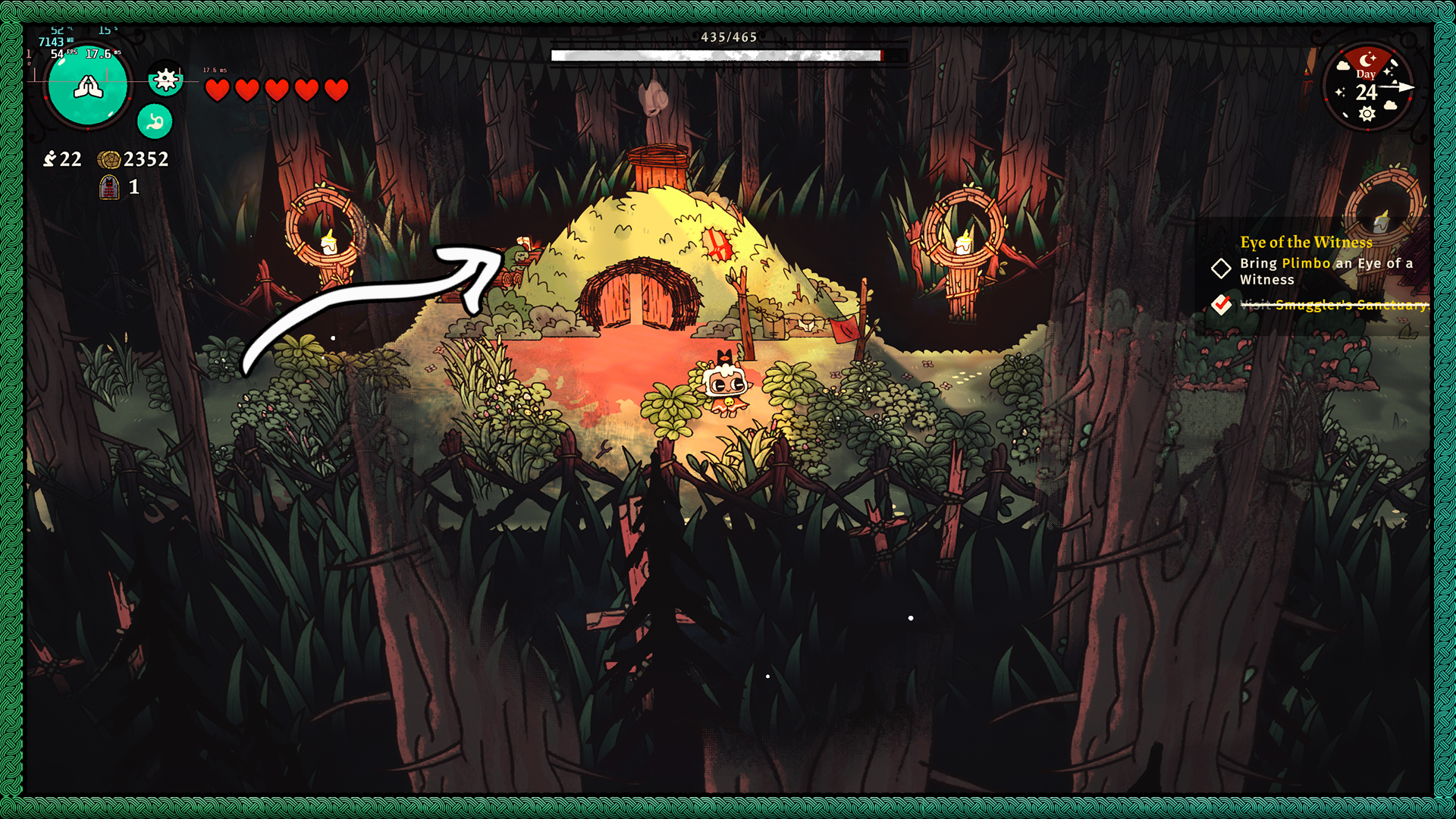 Cult of the Lamb

In the kitchen, prepare a couple of Bowls of Poop.

In neutral areas, you can find a Cat and a Cat.

Here we come to an end for the All achievements – Cult of the Lamb guide. I hope this guide has helped you with your gameplay. If you have something to add to this guide or believe we forgot some information to add, please let us know via comment! We check each comment manually by approving them!