Complete guide with all the magazines available in the game, included the DLC megazines.

Astoundingly Awesome Tales is a magazine series featuring science fiction stories, covering topics such as mutants, monsters, and aliens. The cover art for the magazine depicts imagery from each issue, highlighting the “astounding” tale. Reading an issue of Astoundingly Awesome Tales will give the player character a unique bonus in combat. Many of them directly increase damage, while others a*sist with health or in other ways. 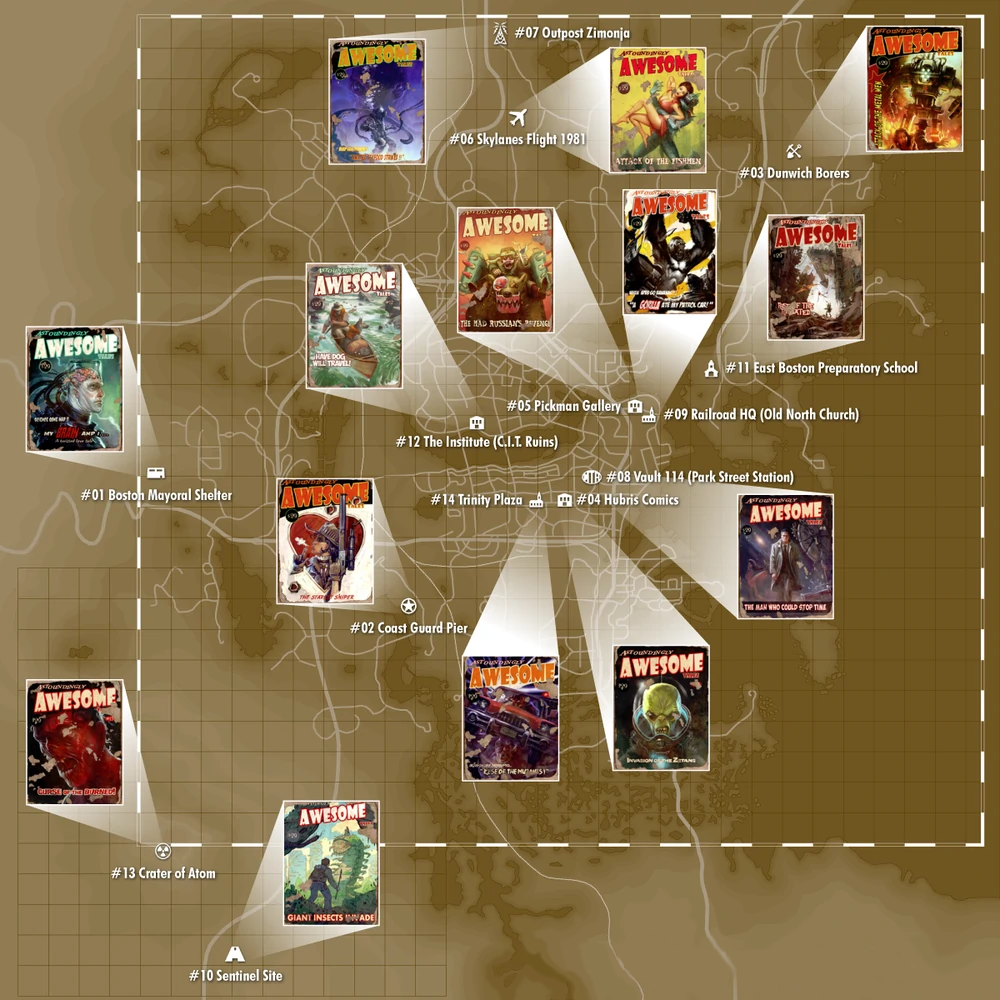 Grognak the Barbarian is a series of comic books published by Hubris Comics in the mid-21st century. The comic books relate the adventures of the main character in a prehistoric world. The magazines consist of a 10-issue run that each gives an additional rank of the Barbarian perk, which raises the critical damage of unarmed or melee attacks by 5%. This stacks together to gain up to a 50% increase in melee or unarmed critical damage, if all comics have been found. 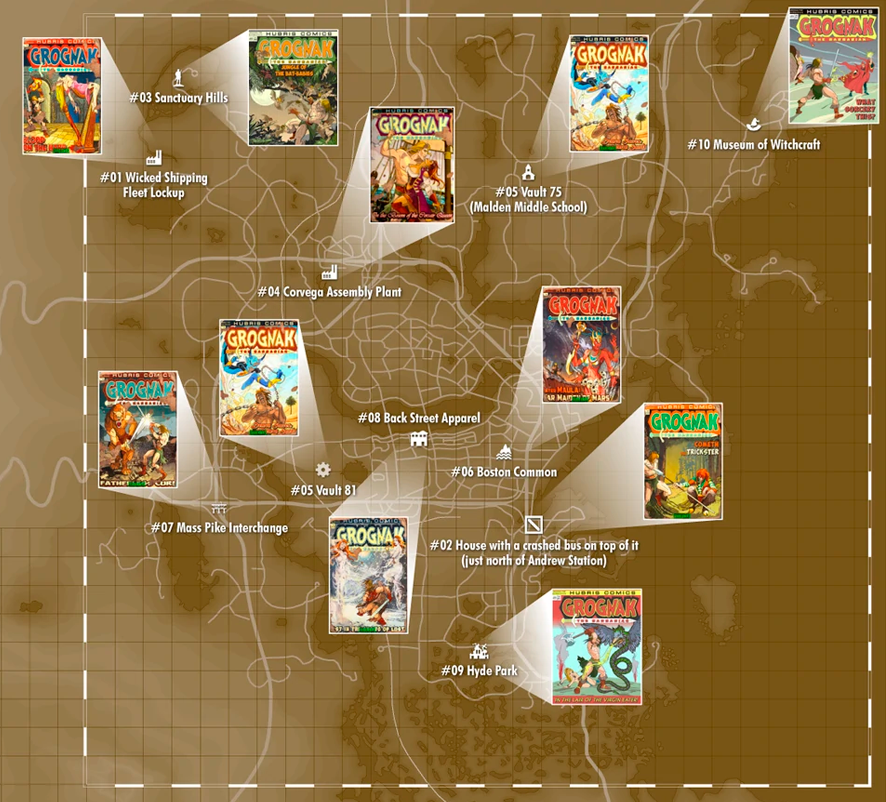 Guns and Bullets is an annual pre-War magazine, it presents itself as “a magazine devoted to the practical use of firearms, and the occasional biased review”. Grants the Guns and Bullets perk for each issue read. The perk makes ballistic weapons do +5% critical damage, stacking for each issue read. A total of +50% critical damage is done if all ten issues are collected. 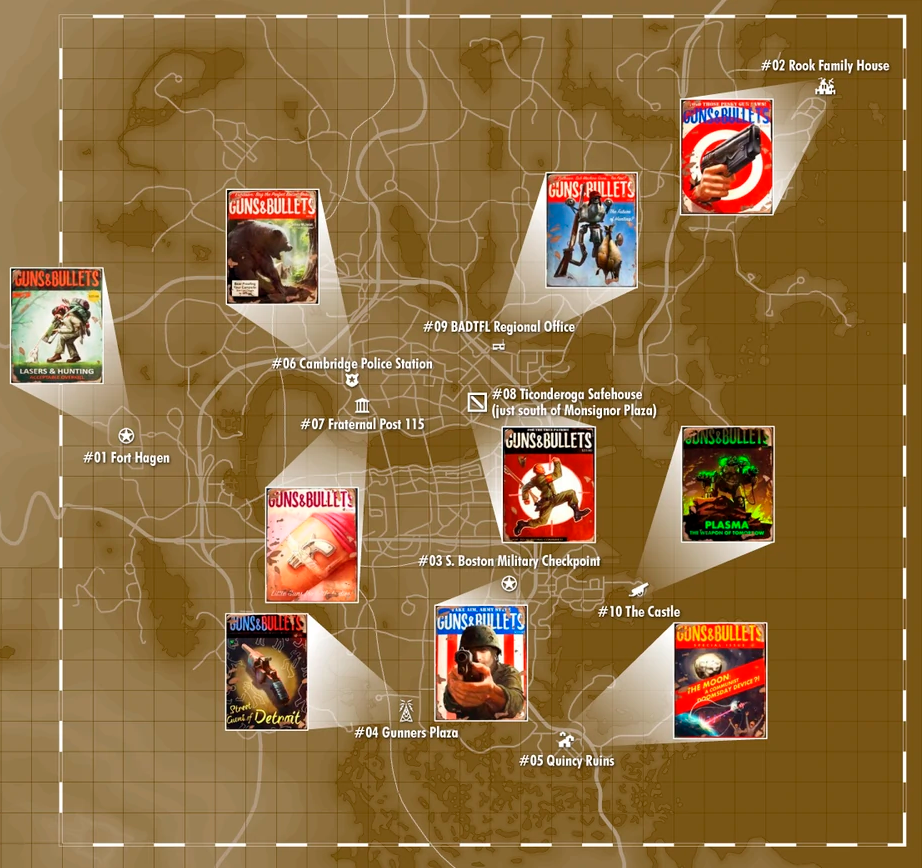 Live & Love is a pre-War magazine series dedicated to lifestyle and relationships, covering cultural events such as the “Nuke-the-Man” festival or health advice such as achieving sobriety. The cover art for the magazine depicts thematic imagery from each magazine. Upon reading, issues grant a variant of the Live & Love perk. There are nine issues in total, with each issue giving a different companion-themed perk. 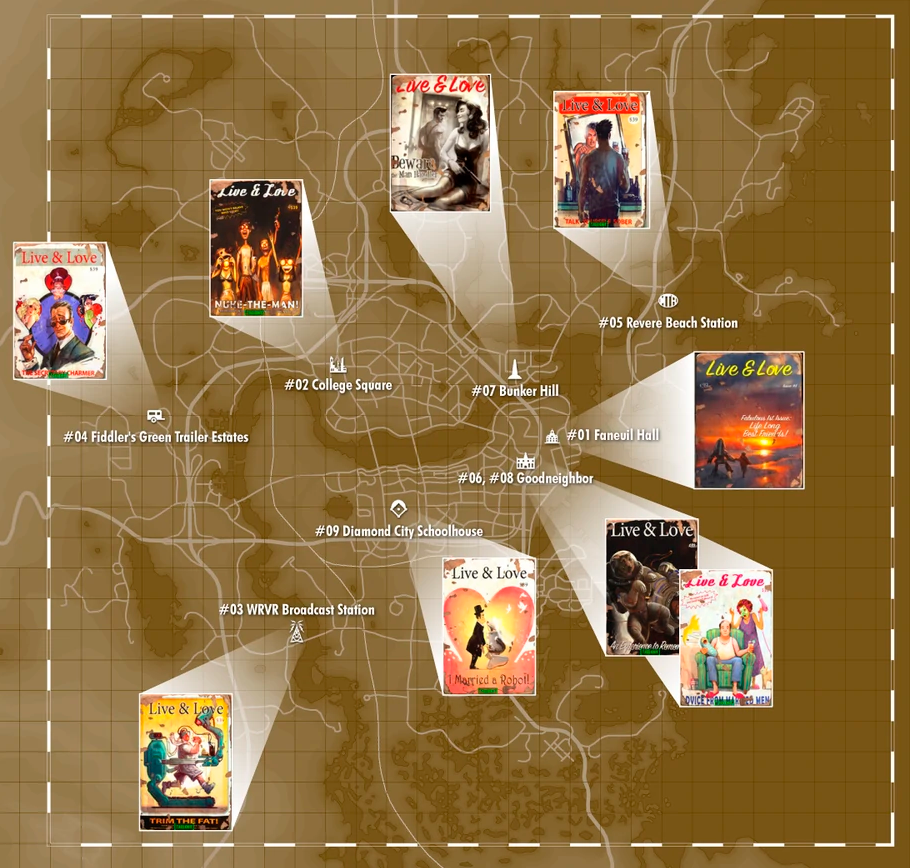 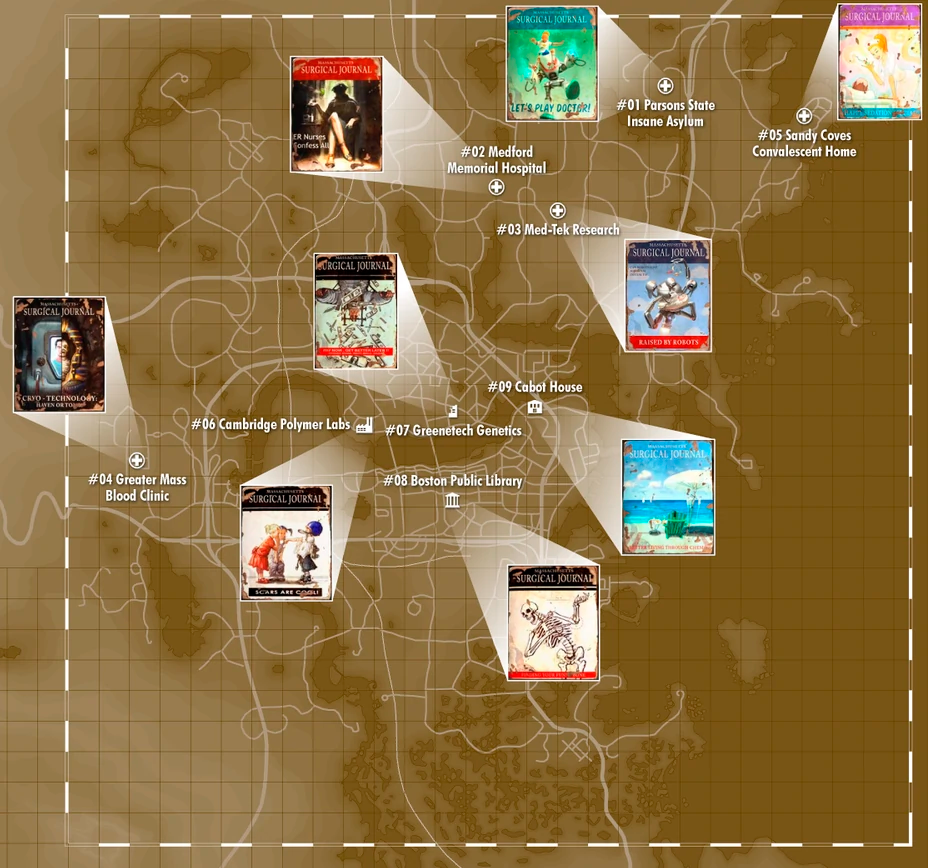 Tales of a Junktown Jerky Vendor

Tales of a Junktown Jerky Vendor a series of magazines about trading and barter written by an unknown jerky vendor from Junktown, California. It is a post-War publication, and the covers are hand-illustrated with simple black ink brush strokes. Each issue grants the player character a level of the Junktown Vendor perk, up to a maximum of 8, which decreases the prices of items bought from vendors by about 3% per level. 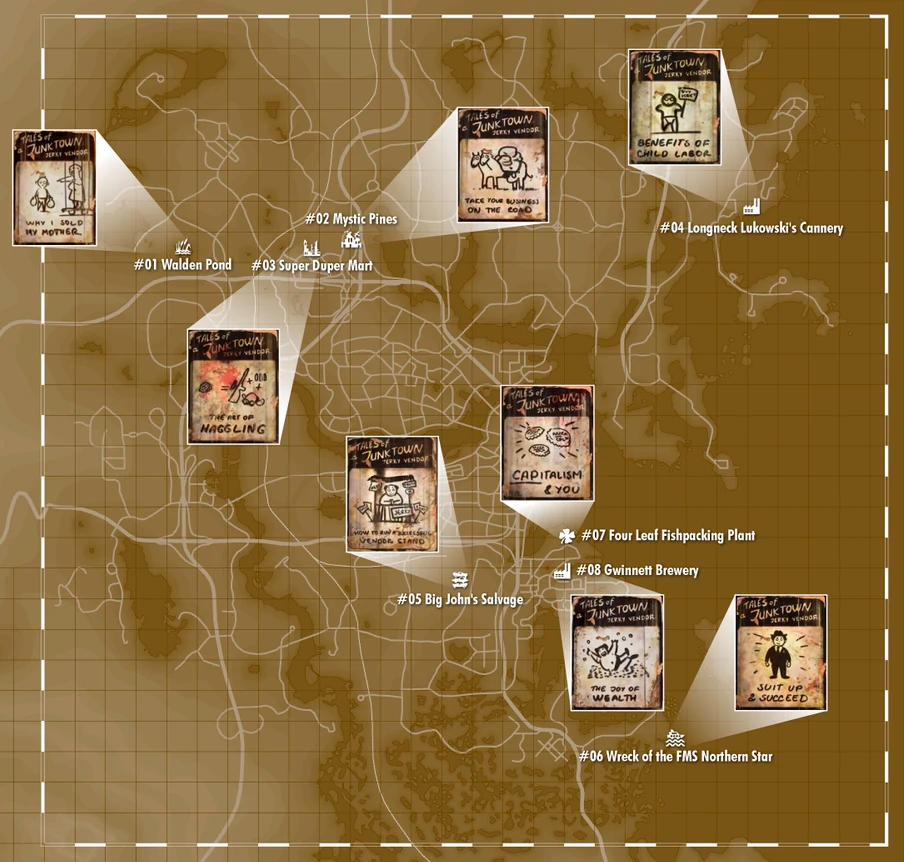 Reading issues of Tesla Science Magazine gives the player character a level of the Tesla Science perk, which makes energy weapons inflict +5% critical damage. This perk can stack up to nine times, up to a maximum of 45% with the 9 levels. 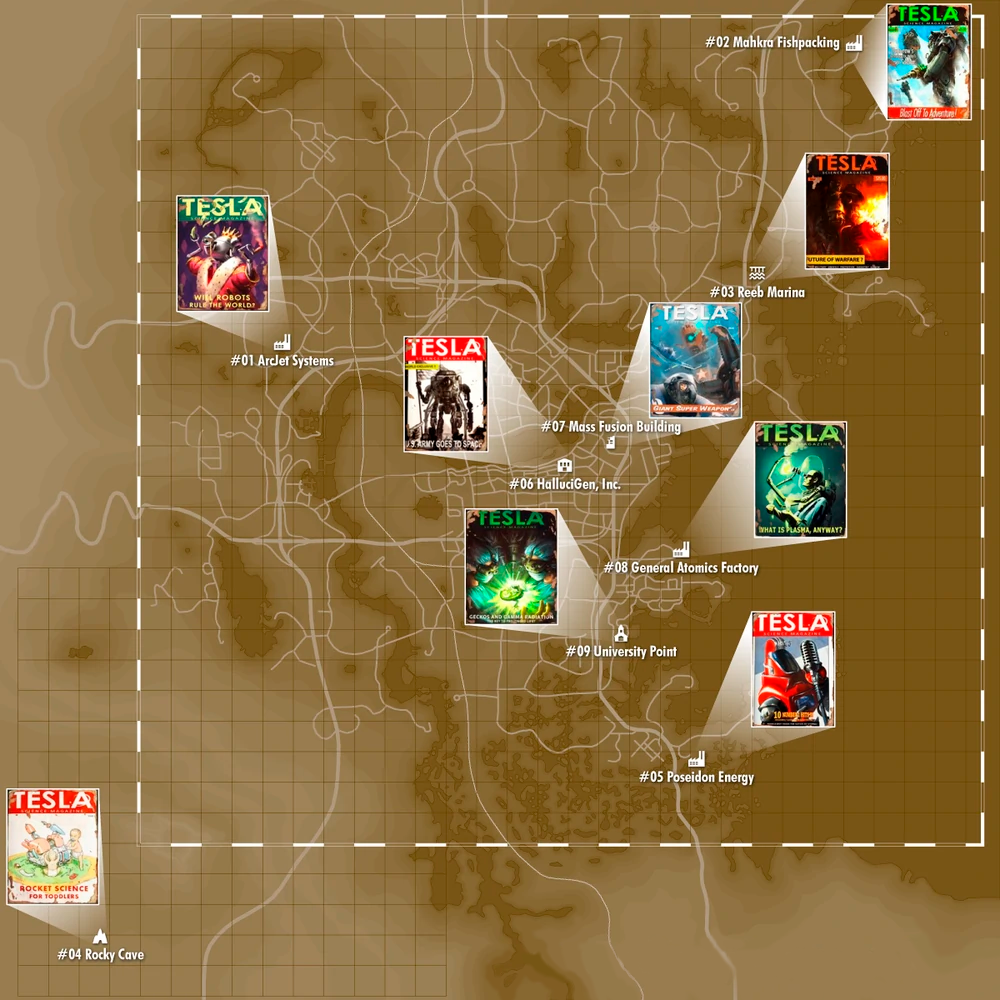 Total Hack is a paperback magazine with aged covers. The details on the covers are done entirely in ASCII art, a style of illustration that uses a*sorted symbols on a computer to create a picture. Reading an issue of Total Hack adds a holotape to the player character’s inventory. Each holodisk can be loaded into a terminal controlling protectrons, spotlights, or turrets to access unique options for all connected units of that specific type. 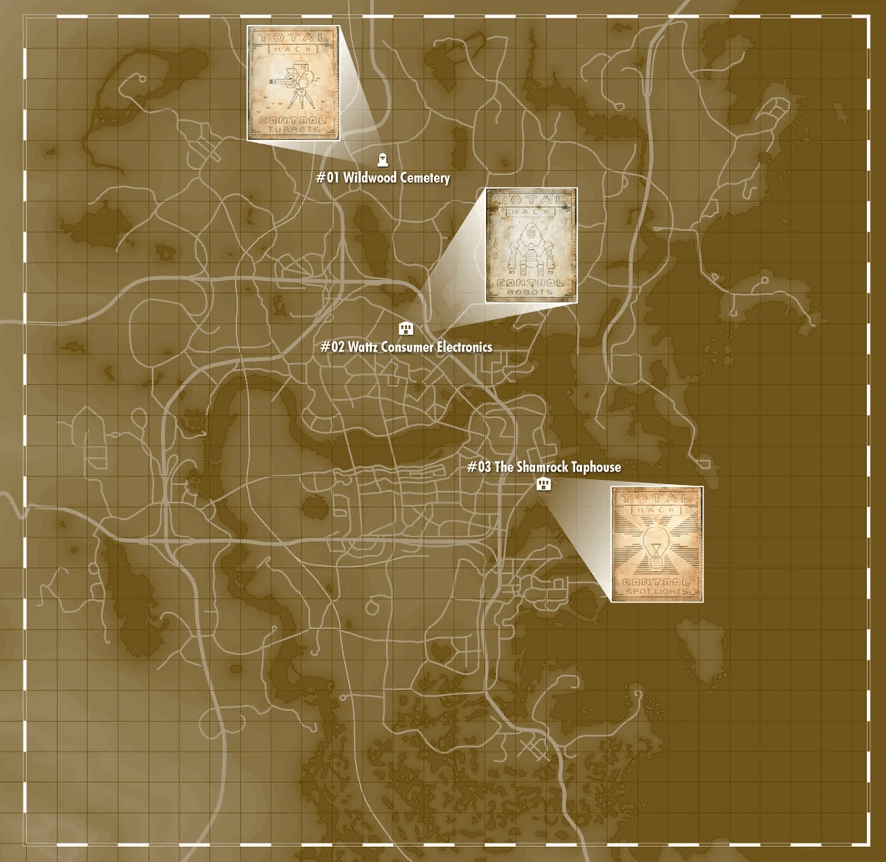 Tumblers Today a book containing information about the art of locksmithing or rather information of the latest in mechanical locks found in safes, footlockers, and doors. Reading issues of Tumblers Today gives the player character a level of the Tumblers Today perk, which gives a bonus to lockpicking, translating to a wider “sweet spot” when picking locks. This perk can be stacked up to five times. 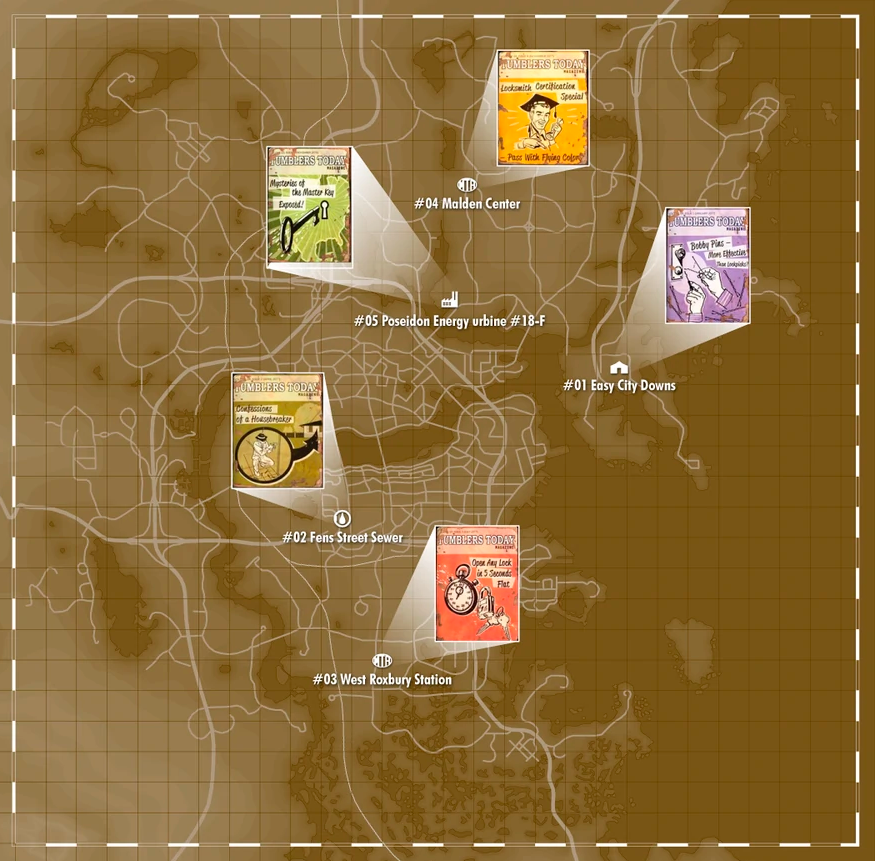 Produced by the United States Army before the Great War, the U.S. Covert Operations Manual provides training and information to its personnel in the art of subterfuge. The manuals were not intended for public circulation and were marked “Authorized Eyes Only”. Each magazine gives a rank of the Covert Operations perk which makes one more difficult to detect while sneaking. 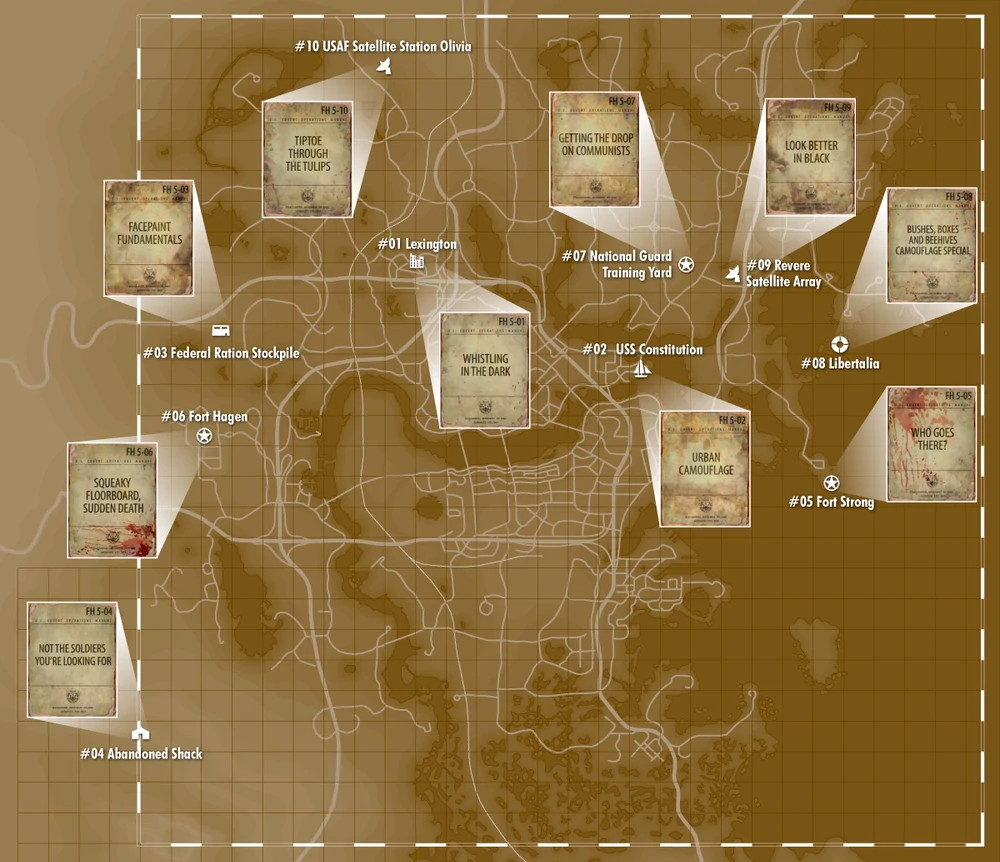 The Unstoppables is a comic book published by Hubris Comics. The group is formed of the Silver Shroud, Mistress of Mystery, The Inspector, Manta Man and Grognak the Barbarian; characters which all appear in different comics. Upon reading, the Sole Survivor gains a level of the Unstoppable perk which gives a +1% chance of avoiding all damage from an attack. This perk can be stacked up to five times, giving a 5% chance to avoid all damage. 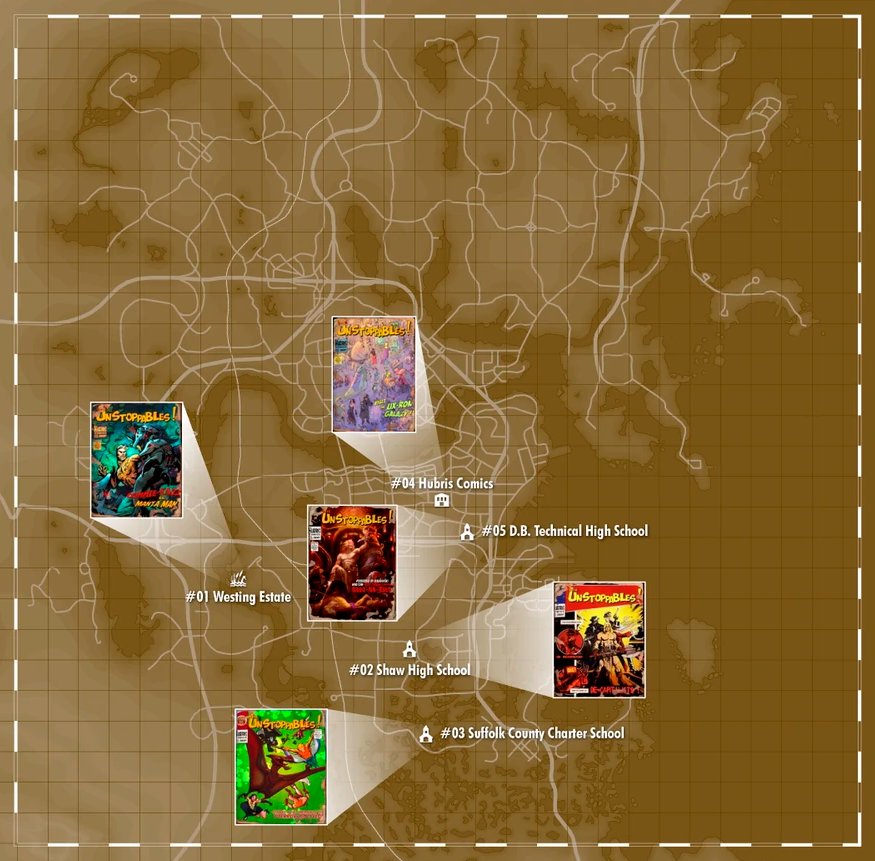 Wasteland Survival Guide is a post-War edition magazine series, written and illustrated with crude pen drawings. Reading an issue of this comic will grant a variant of the Wasteland Survival perk, (except for two) focusing on increasing survival efficiency with a specific topic. 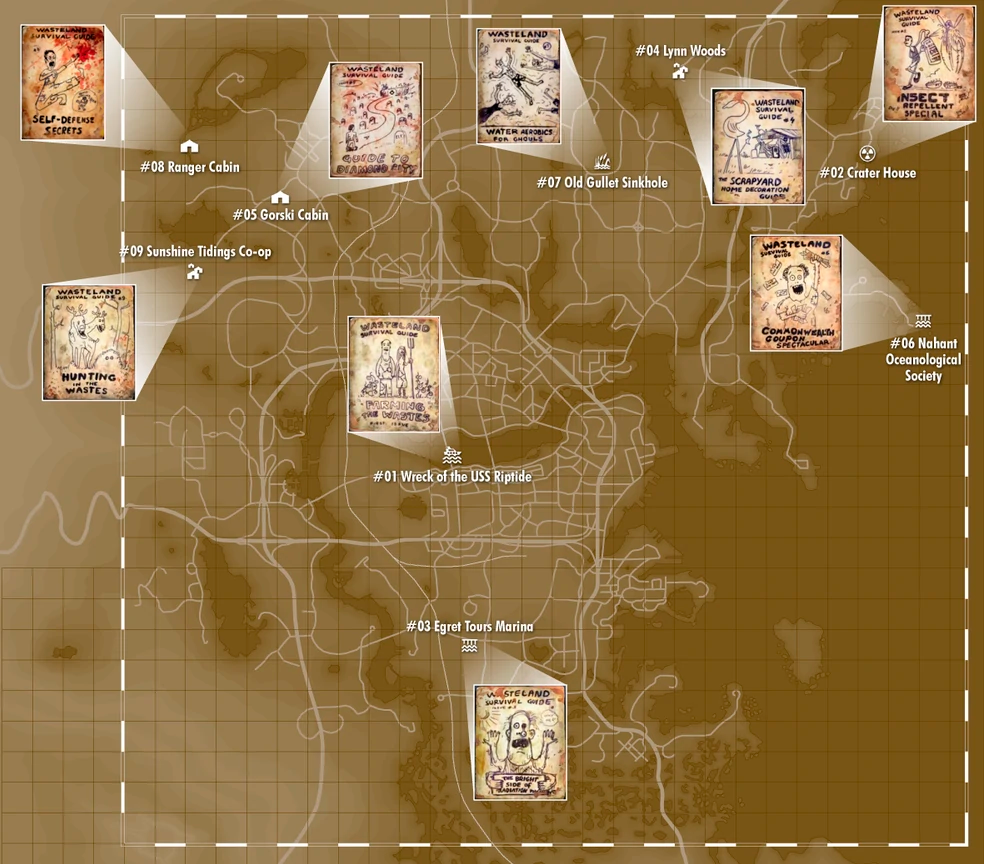 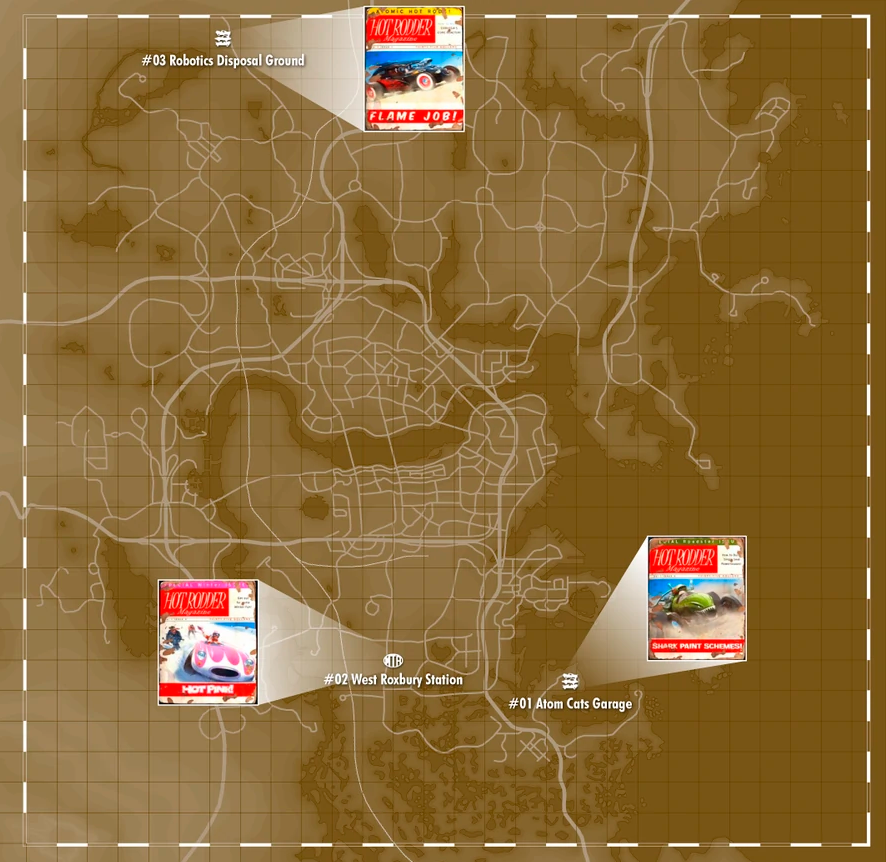 La Coiffe is a pre-War magazine about hair styles. By reading issues, the Sole Survivor unlocks additional hairstyles at the barber. 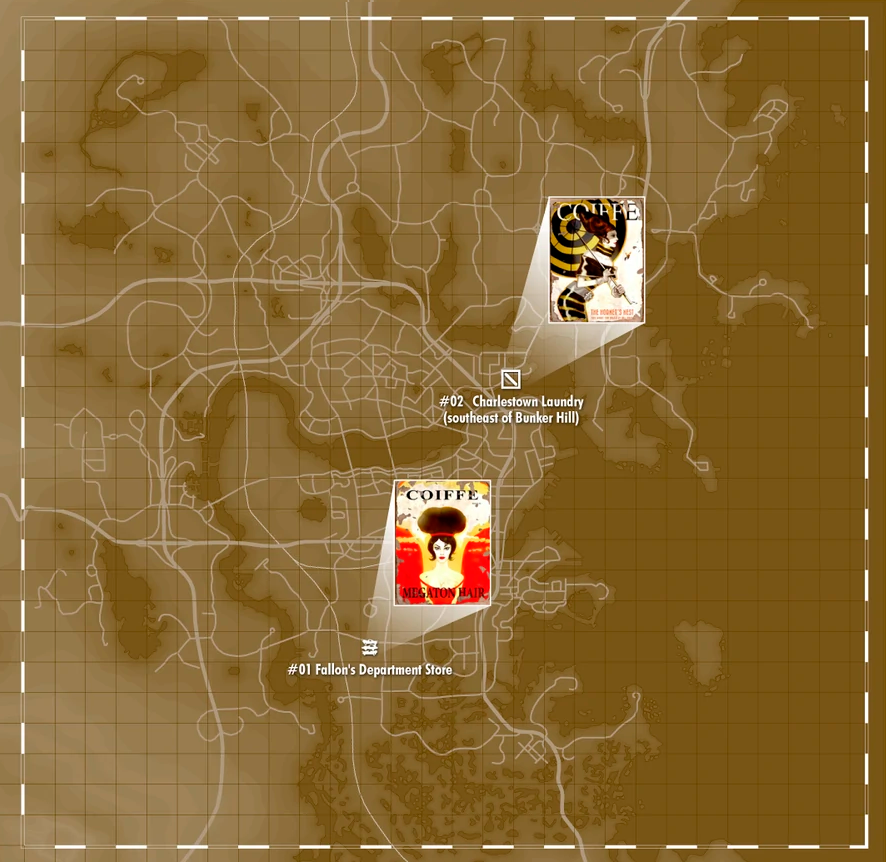 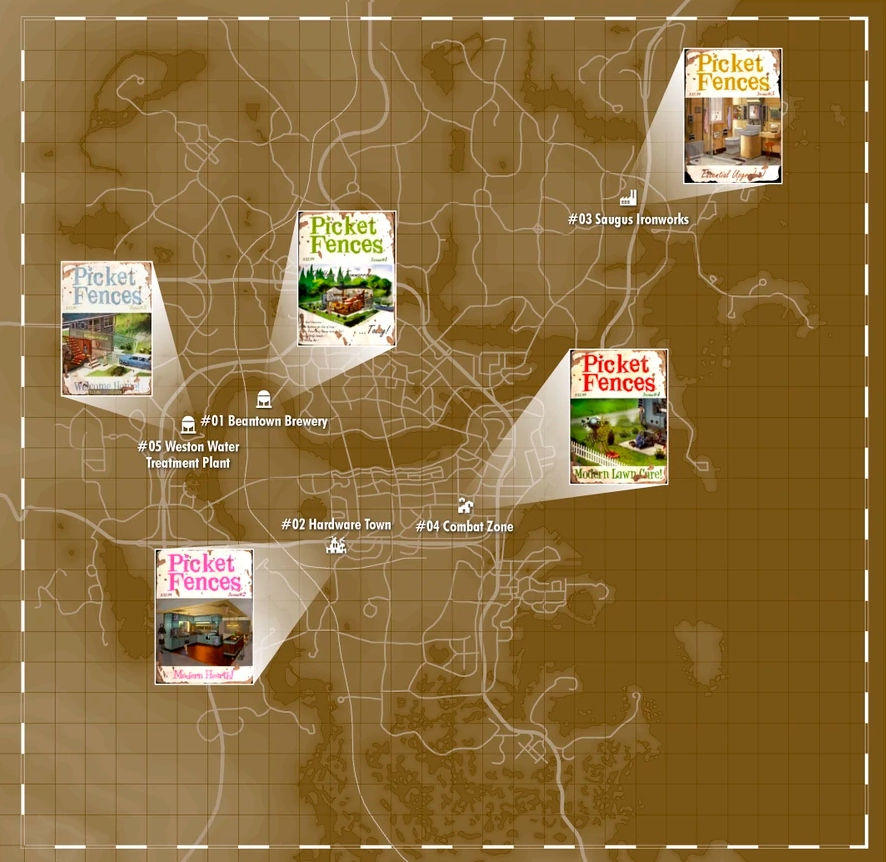 Each issue of RobCo Fun collected adds a unique holotape to the Sole Survivor’s inventory. When used, the holotape plays a game based on a retro video game. The holotapes can be used at any time, provided they are in the Sole Survivor’s inventory and can be played on either their Pip-Boy or on any terminal. Unlike most other magazines, RobCo Fun issues respawn and can be collected an infinite amount of times. 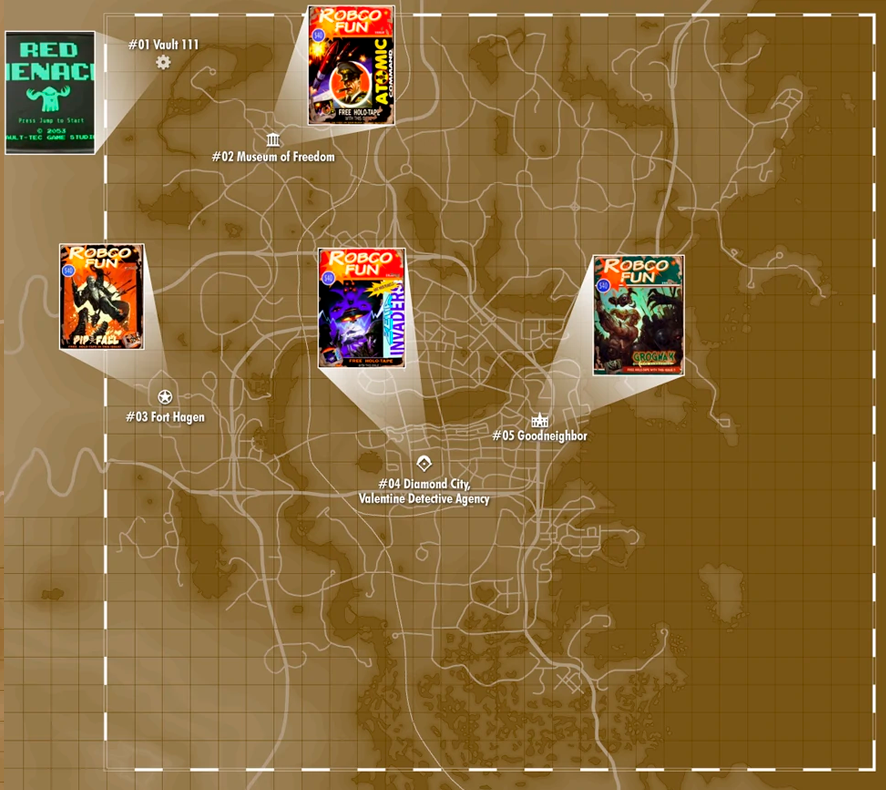 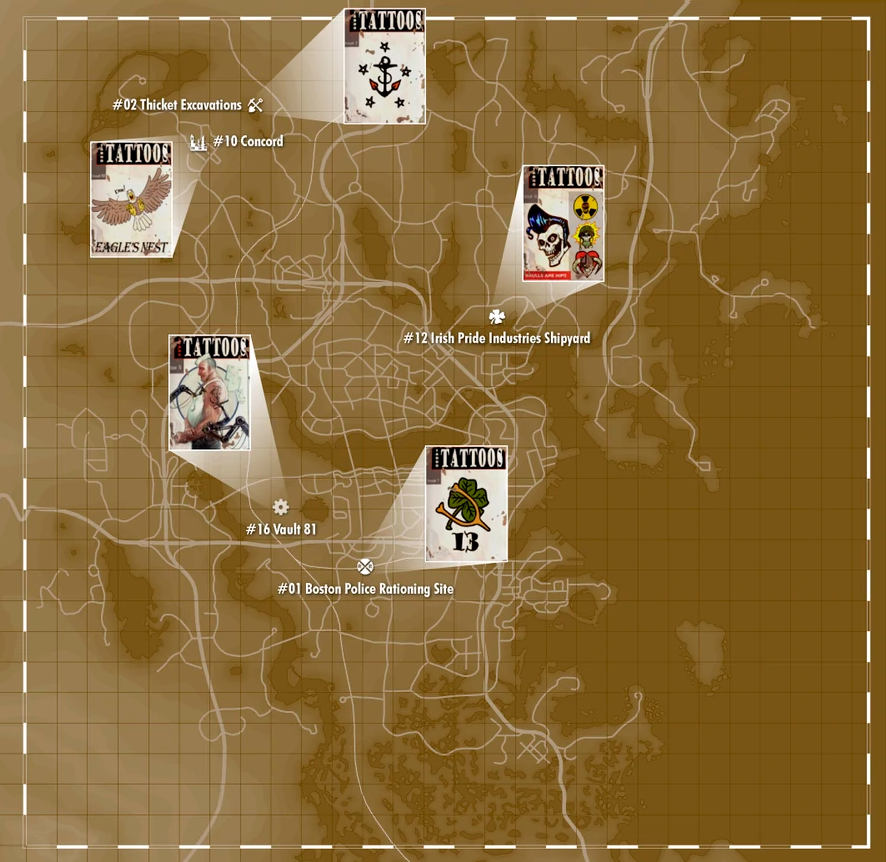 You’re SPECIAL! is a book published and written for children by Vault-Tec. This book identifies the seven key attributes that are viewed the most desirable in a vault resident. The attributes are as follows in order: Strength, Perception, Endurance, Charisma, Intelligence, Agility, and Luck (S.P.E.C.I.A.L.). Each of the attributes are given a brief description:

Islander’s Almanac is a series of post-War magazines detailing various tips and tricks to better survive the Island’s natural hazards. Reading an almanac increases the rank of the perk of the same name. 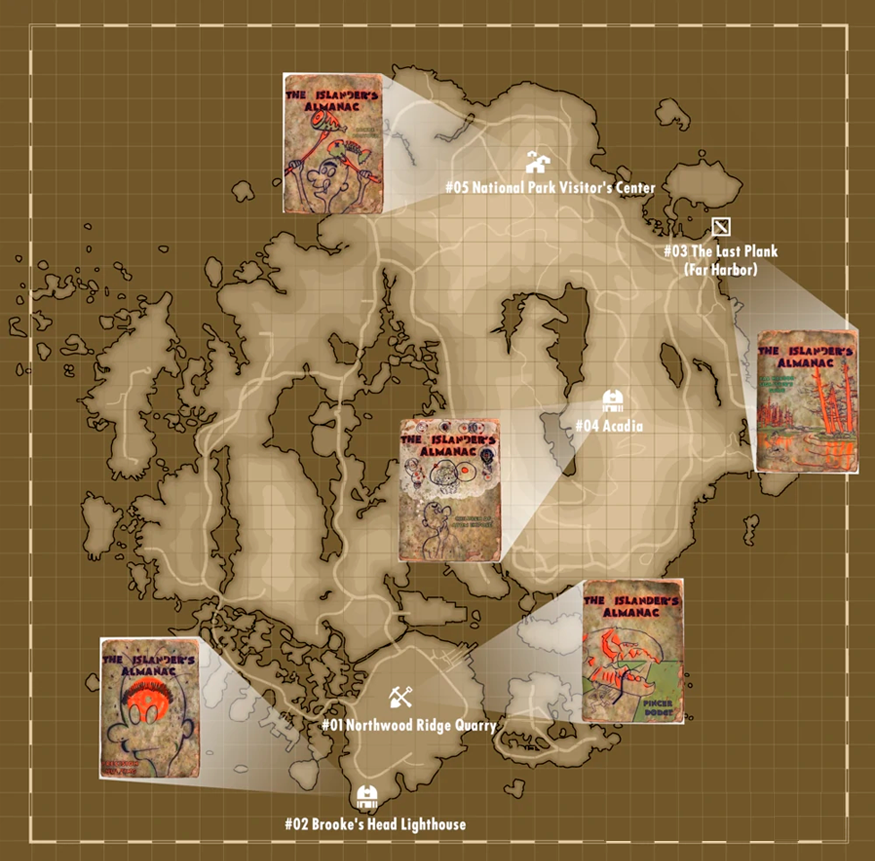 SCAV! magazines appear to be black and white hand-drawn comic books. The subject matter and art indicate that they were created post-War. Each issue that is collected adds its own SCAV! perk, ranging from damage modifiers to speech and SPECIAL boosts. 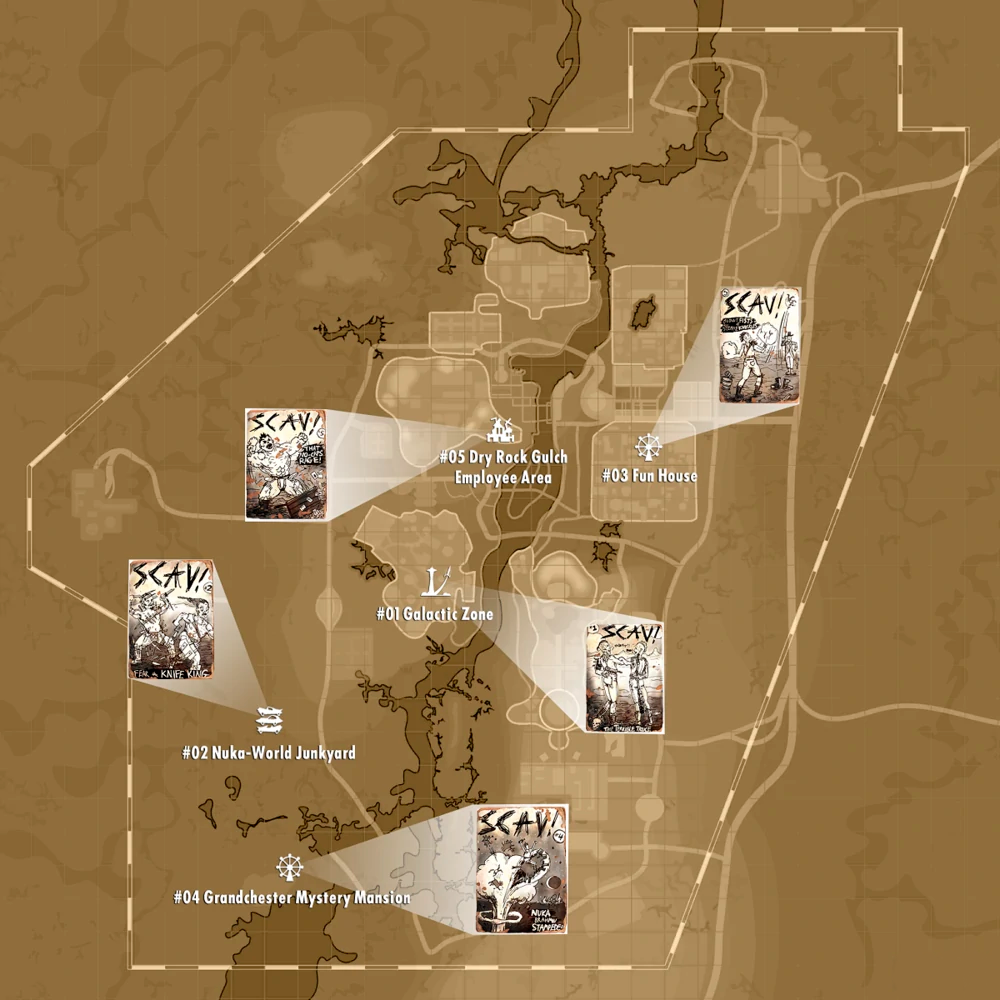 Thanks for reading this guide, I hope it’s helpful.

Here we come to an end for the All Magazines – Fallout 4 guide. I hope this guide has helped you with your gameplay. If you have something to add to this guide or believe we forgot some information to add, please let us know via comment! We check each comment manually by approving them!