This guide covers which elements “cost” the most framerate to enable, and some best practices to keep you running at a solid 60!

Effects, in order of costliness

Let’s start by giving the really quick-and-dirty breakdown of what costs the most resources to render on the GPU. We’ll get into GPU versus CPU performance bottlenecks, what those words mean, and a lot more detail about tuning these elements later.

Functionally-free items you should never need to disable

How to think about performance

Ok, with that out of the way, I want to take a bit of time to explain the words I’m using and lay the groundwork on how to think about framerate and performance. Fair warning, everything is going to be a huge oversimplification targeted at folks with zero familiarity on this topic!


Keysight is, essentially, a video game.It’s built in a game engine, it uses dynamic inputs to make effects happen. Therefore, the general pipeline that your computer needs to work through to deliver a frame is as follows:

Keysight does have to simulate a lot of things on the CPU, but typically it is the GPU that is limiting the framerate due to the nature of how difficult it is to render lights and particles and things. This meat of this guide will be on reducing the “cost” on the GPU, but let’s quickly look at how to tell whether you’re GPU or CPU “bottlenecked”.

First of all, Keysight’s stock behaviour is to have “v-sync” enabled. This prevents Keysight from delivering more frames than the refresh rate of your monitor (typically 60hz, so the framerate will be locked to around 60fps or frames-per-second). We’ll want to turn this off to figure out what your performance is limited by, and how much headroom you have. While we’re in here, we also want to turn on the framerate counter (this can be toggled with the C key too) and Test Preset in the top right, to generate some load on Keysight. 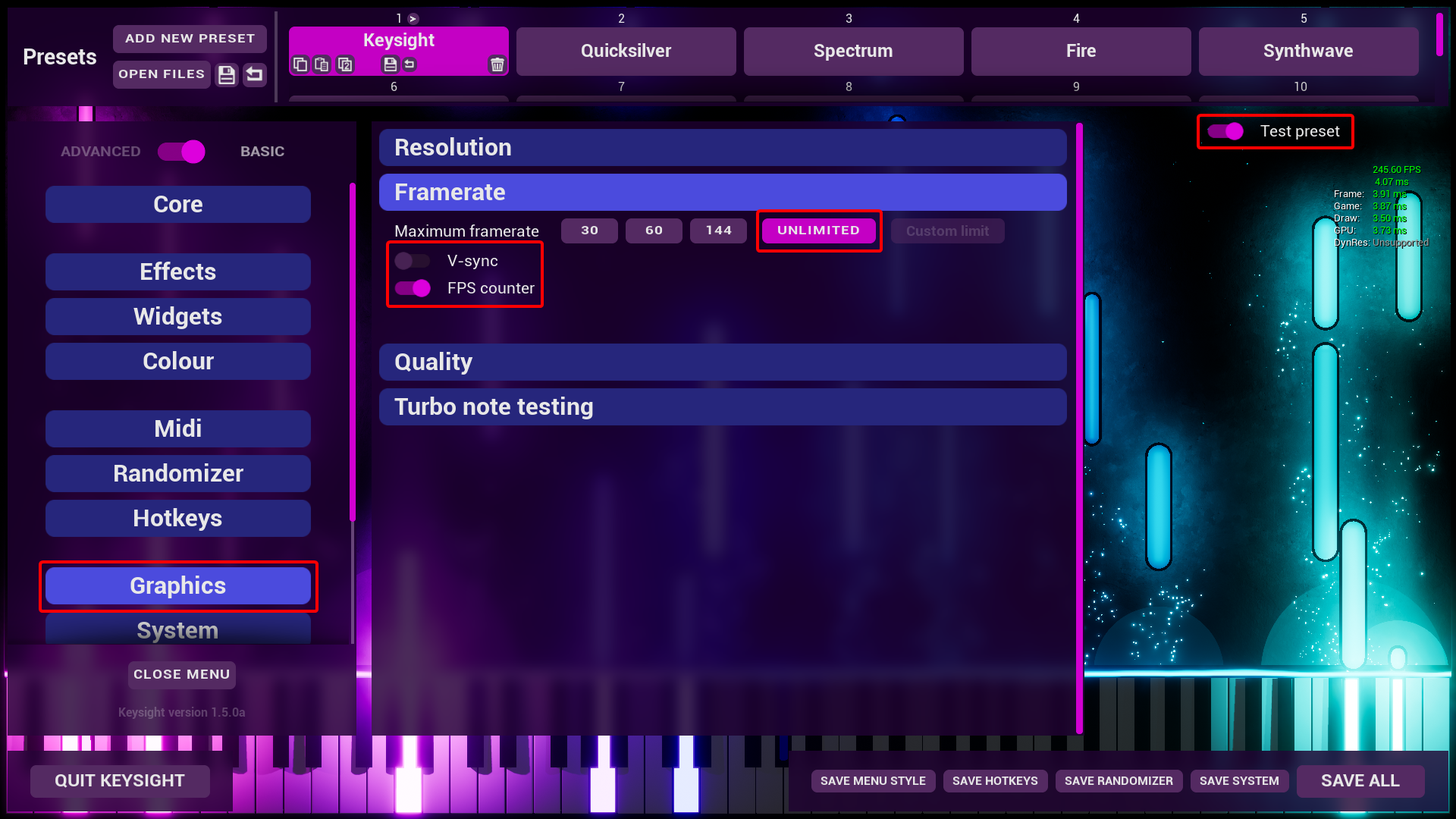 The green numbers on the right are how we can break down whether we’re limited by the CPU or GPU, and generally how good our performance is. I would recommend having a “safety factor” of at least 50% above your desired framerate while in the standard test preset mode. By this I mean if you want 60fps, make sure you can comfortably run Keysight at 90fps while it’s running in an unlocked framerate. 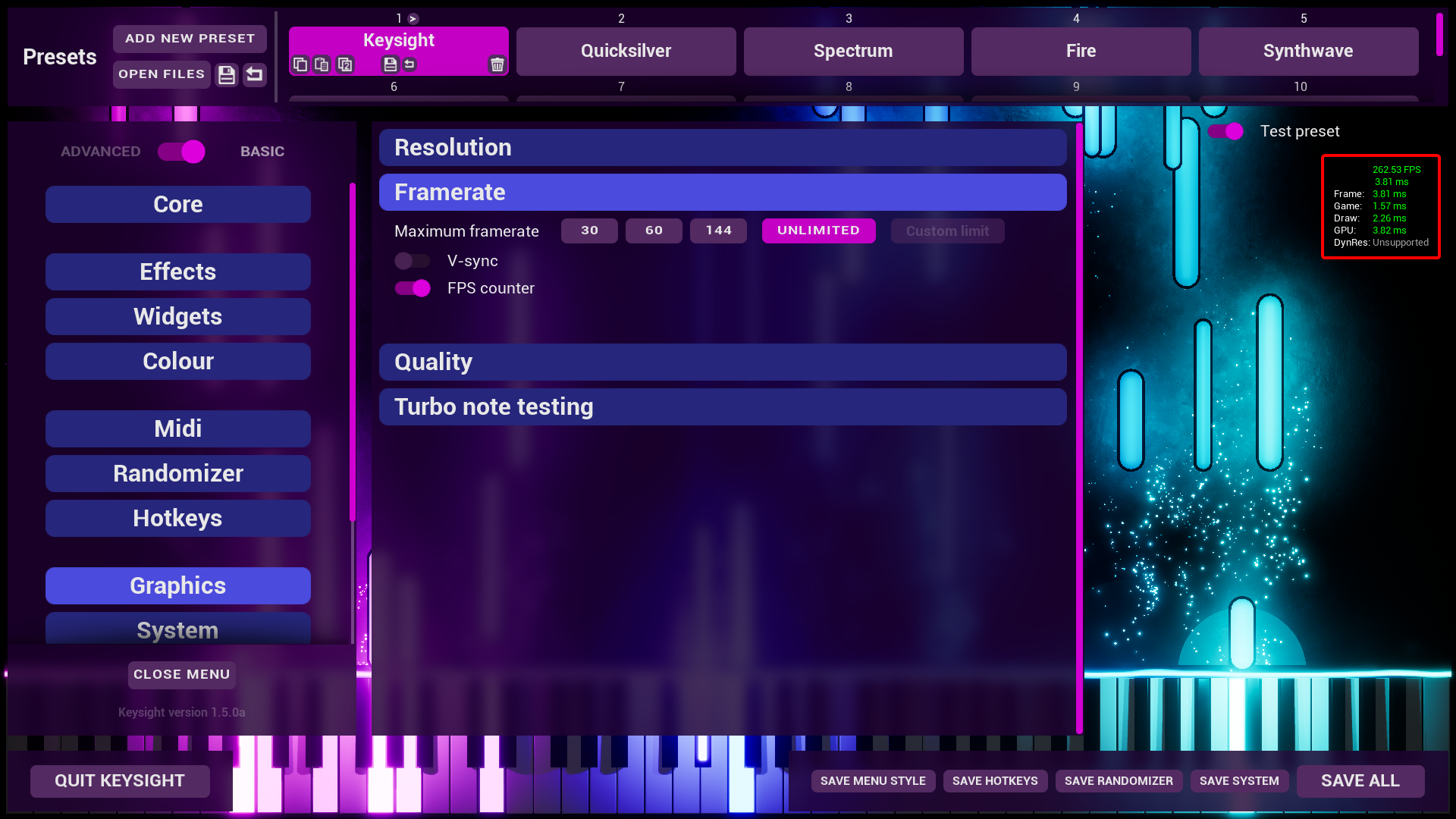 This is the raw timing data reported by the engine. It changes every frame, so it can be a little hard to read without freeze-framing it, but the important thing is to get a rough feel for which numbers are bigger than other numbers on the Game, Draw and GPU portions versus the final frame time. These “threads” all run parallel to each other, so a frame is prevented from being delivered any faster than the slowest (or biggest) of these numbers here.


In the above example, the GPU thread is clearly the largest number, and about the same as overall frame delivery time, so we can safely conclude that we are “GPU-bound” and if we reduce the load on the GPU, we can gain more framerate.

In THIS example, things are a lot less clear. An important thing to note here: if you are bound by the Game/Draw thread, the GPU thread will also slow down to the equivalent speed. This means if your Game/Draw thread time is roughly equal to the GPU thread, you do not know if you are both CPU and GPU bound, or just CPU bound. This is what is happening in this situation.


We can dig a bit deeper and figure out if it’s CPU or GPU by pausing Keysight with the left arrow key. As this stops almost all simulation and stops new things having to be loaded into the GPU via the Draw thread, it drastically reduces our Game and Draw thread cost. However, the GPU is still having to render each frame the same as before (even though nothing is moving). Therefore, if pausing Keysight this way gives a massive framerate bump, congratulations, you were CPU-bound! If not, you just happened to be balancing the cost for CPU and GPU almost perfectly, and if you need more framerate you will need to reduce the load on all threads.

Honestly there’s not a lot you can do here.

The easiest method for doing this is simply to use the Graphics presets. I would recommend “Ultra” for any competent gaming-grade desktop PC from the last 5 years, “High” for gaming laptops, and “Low” for older computers or computers not intended for gaming. These graphics presets automatically adjust all default presets to reduce or remove effects relevant to their tier. However, if you want to manually adjust things:

This is all we can share for Basics – Performance – Keysight for today. I hope you enjoy the guide! If you have anything to add to this guide or we forget something please let us know via comment! We check each comment! Don’t forget to check SteamClue.com for MORE!