#WTGuide1 In this guide i’m going to show you most of the basics of the game. Such as lineups for each nation , tips for beginners (overall) , and crewskills

Starting from lineups. Best Lineups for Each Nation (TANKS) 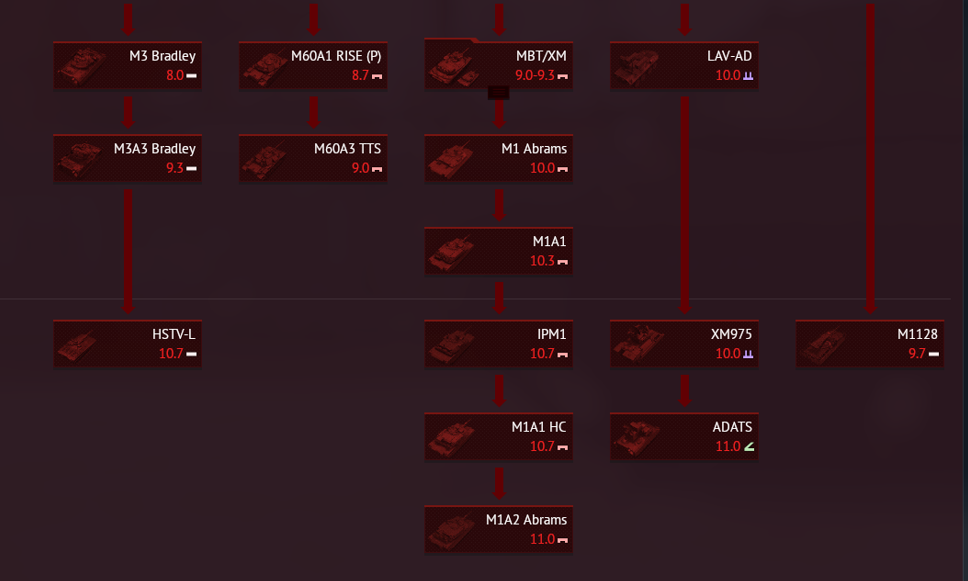 We got Light vehicles to the left and to the middle we’ve got MBTs and to the right we’ve got SPAAs and TDs Most likely u’re going to have the Abrams for sure. And if u like being fast and deadly u can go for the Light vehicles or if you want to sit somewhere and wait for the target you can go far right with TDs for the M60A3 TTS; this tank is not perfect since it’s a upgraded version of M60 against more advanced new MBTs. And i would recommend going for the SPAAs if you’re going to play RBs beacuse there are gonna be enemy aircraft annoying you on the ground and the ADATS is the best SPAA in game. 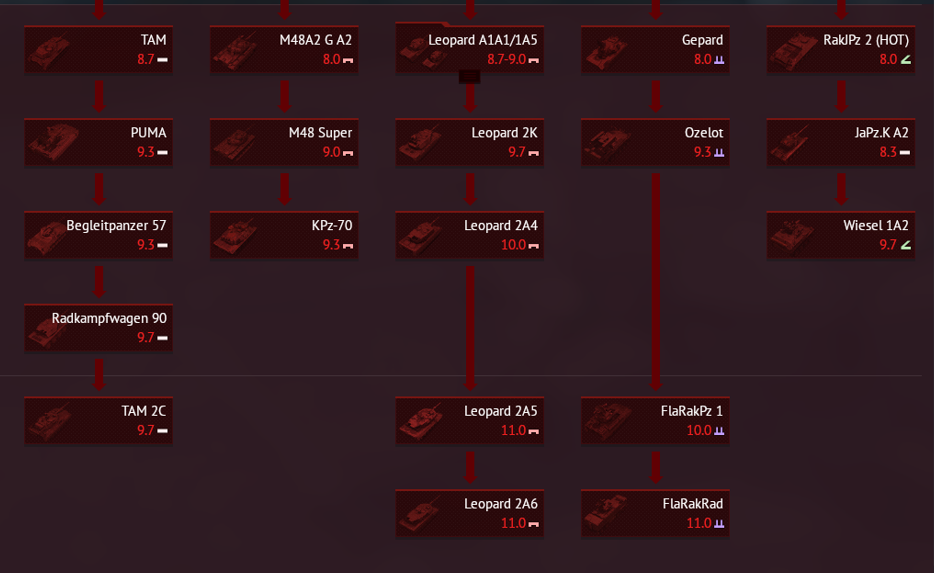 So the German Leopards are simply perfect and 2A6 has the most pen power in the game.So if you want to be fast go for the left side and the begleitpanzer on the way u’re gonna have some fun. i’m a*suming u already are going for the leopards if not go now! and for the SPAAs go for it especially the Gepard. for the TDs i don’t prersonally like German TDs beacuse they’re heavy and useless their armor can be penetrated easly by any other nation. 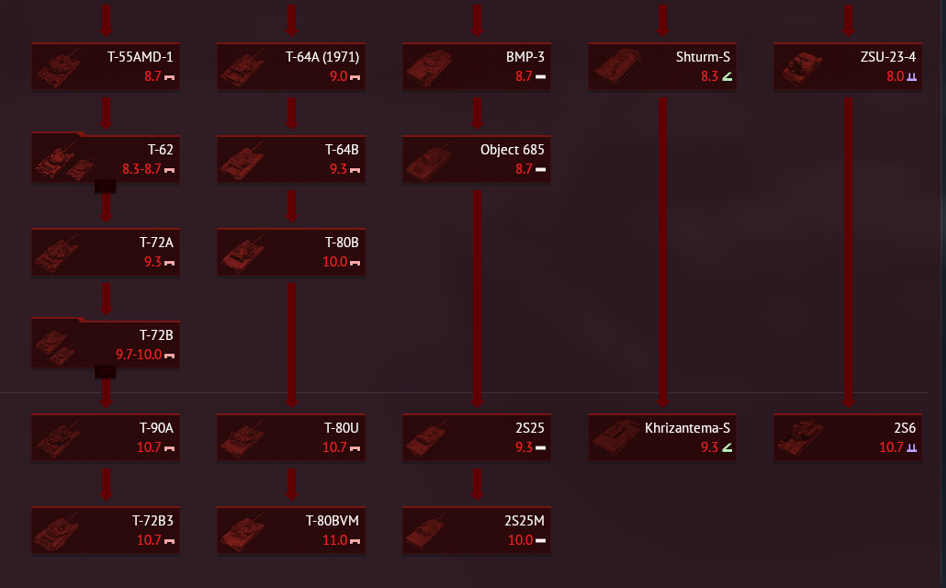 The USSR is one of the most powerfull nations out there. Armor ? u got it Firepower ? u got it they’re average when it comes to speeds tho and if we’re talking about reversing on tanks they’re the worst. T80BVM is a monster go for it and the other T Series they’re pretty much the same such as armor, gun, speed. when it comes to the middle like BMPs and 2S Series, they don’t have armor but they’ve got the speed tho. and firepower is good too u can really flank enemies with theese things. and Khrizantema it’s got 2 powerfull missiles and u can guide them from behind a cover bacuse they’re above the vehicle. And u can fire them to a helicopter or low speed jet too beacuse of the little radar u got up there. for the Tunguska (2S6), is a balanced SPAA it has two 30mm for close range and it has 8 surface to air missiles with a good range. 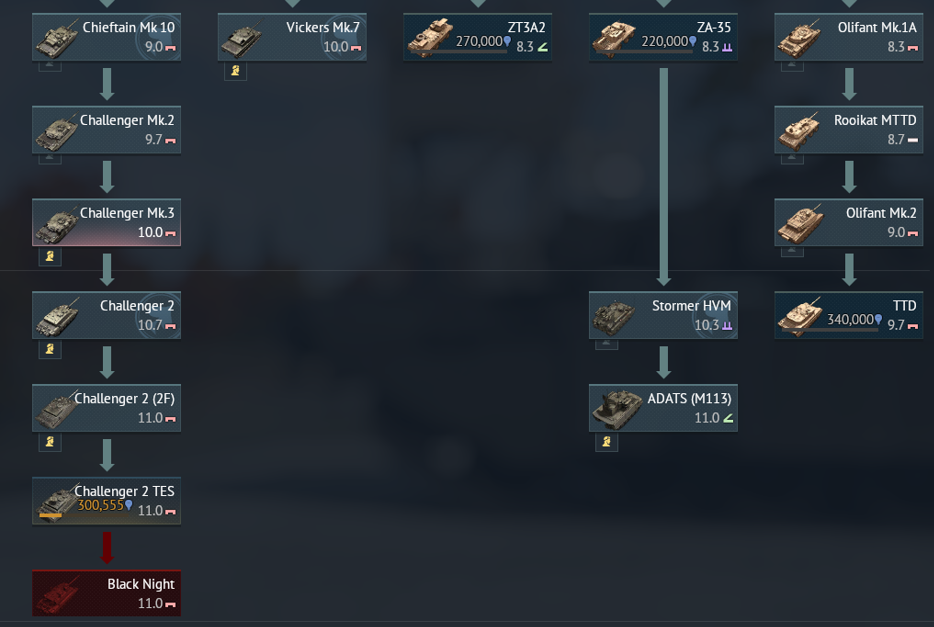 Now for the Britain. Challengers got i think the best armor in the game, they’ve good firepower good speed such an average vehicle nothing worst or the best. and Vickers MK7 is one of the BEST vehicles i’ve ever played in this game why? beacuse it has really good speed average firepower and spaced turret armor and actually works most of the time. If u’re a flanker this is your vehicle right here. Warrior used to be good but now it’s useless beacuse they changed it’s tows air speed. and the ZT3A2 is useless too. ADATS is the same adats that USA has but this one doesn’t have the 25MM cannon on top. Rooikats are flankers too but they don’t really have armors so u’re always one shot gotta be careful with thoose 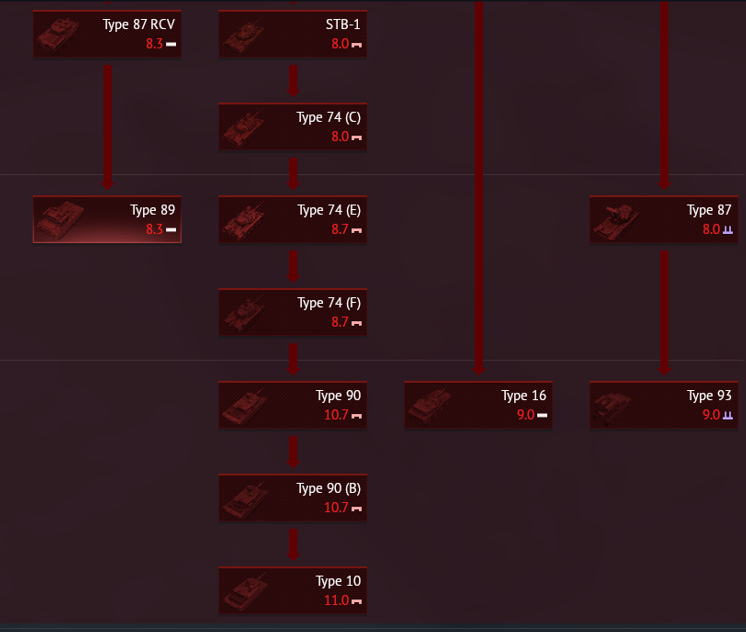 Japan is unique by it’s vehicles. The 89 has decent speed and decent gun but good rockets with decent armor beacuse of it’s angle it can sometimes ricochet shots. Type 10 is perfect beacuse it has good gun with perfect ammo, good armor, good speed, BEST reloading speed. Type 16 is a flanker too it’s fast good firepower no armor. Type 93 SPPA is the FASTEST vehicle in the game it’s missiles might not be the best and u can’t shoot them to ground uints but this thing can be fun sometimes. 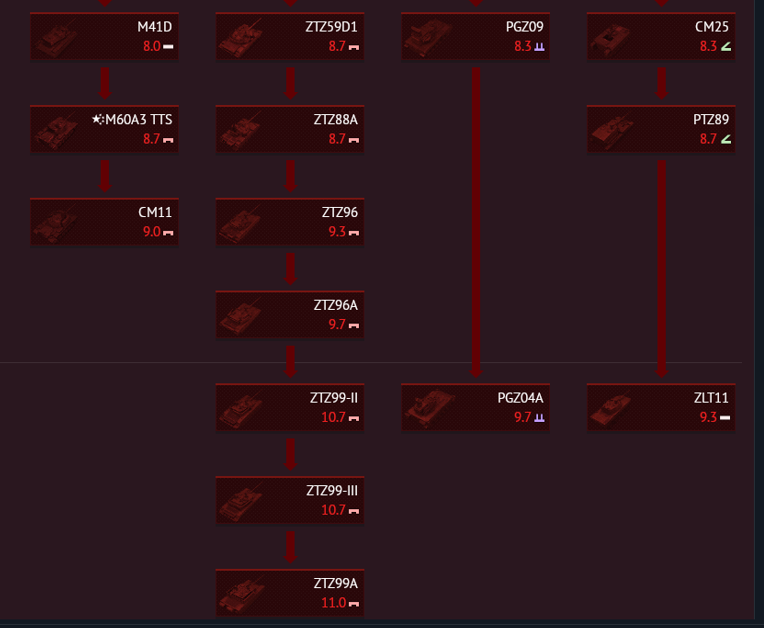 CM11 is more advanced M60 Patton i wouldn’t really recommend this tank since it’s the same thing with the M60 TTS. if u’re a bulldog fan u will love the M41D since it’s more advanced. ZTZs are pretty similar to russian T series with armor speed and firepower, and deisgn too. But the new ZTZ99A can reverse much faster. Their SPAAs are actually not good missiles are not cannons are neither. ZLT11 is pretty much the same thing with the Russian 2S25s, fast good firepower no armor. 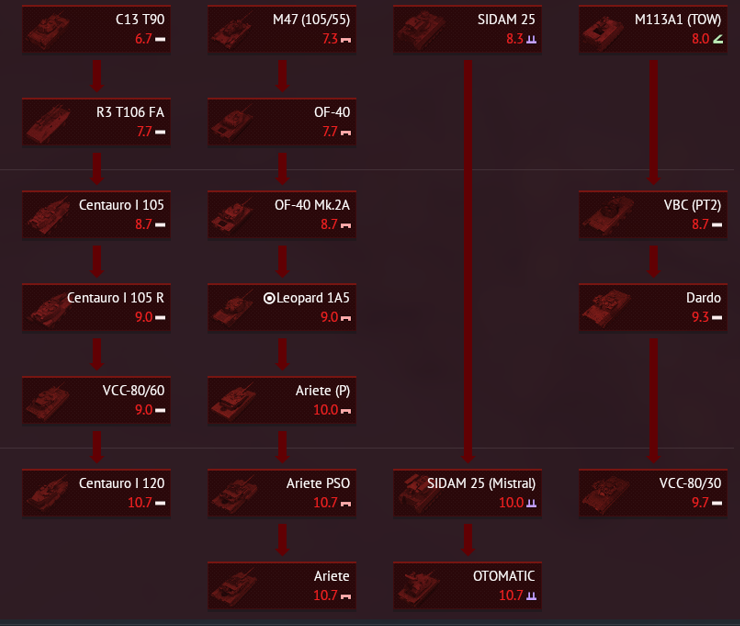 since this nation has the most cancerous vehicles and tanks ppl hate this nation except who’s the ones playing. Centauros are the best flankers in this game i think beacuse of the good speed perfect firepower and decent armor. Arietes have average armor with decent speed and good firepower. Go for both sides. OTOMATIC is the most fun SPAA in the game i think beacuse it’s a SPAA but it can shoot armor piercing round so that means you can take out tanks and 0.5 second of reloading can be deadly as hell and you can do some accurate shot to medium range against jets too. VCC80 this thing has a good cannon with perfect ammo, two missiles which can be selected as TOW2B which means you can shoot somebody who’s behind the cover since missile is going to explode on top of him and with decent speed this vehicles is dangerous in hands of somebody who knows the game. 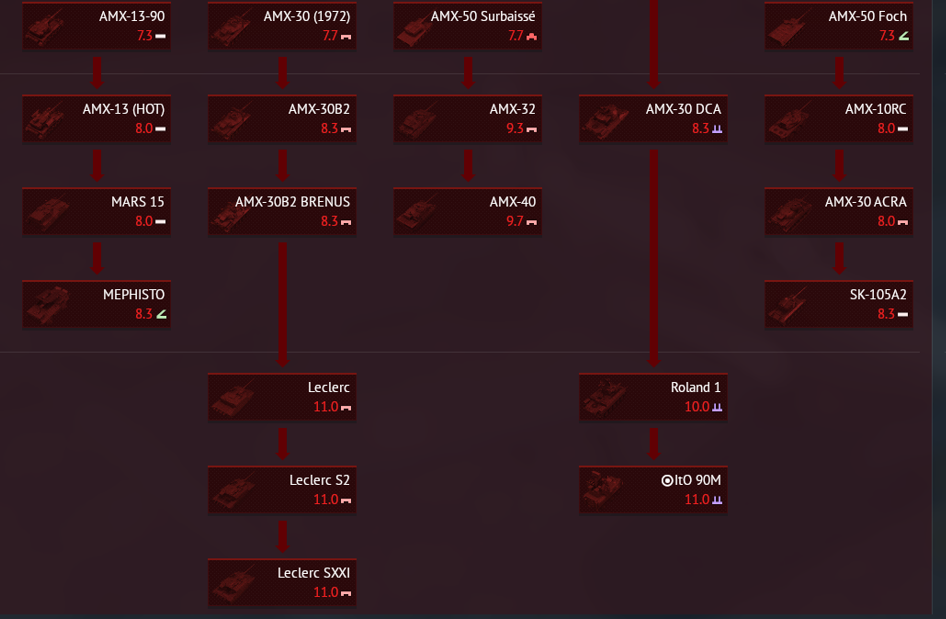 MEPHISTO is a little vehicle with a couple rockets on it but it’s dangerous can take out bunch of vehicles if used properly. Leclerc is fast good armor good firepower and deadly with good reloading rate. AMX40 is fast decent armor decent firepower such and average vehicle. Ito90M is a good SPAA with good range of weapons. And the right side, mostly ppl don’t like those vehicles doe to lack of power on some sources. So i wouldn’t recommend grinding that side. 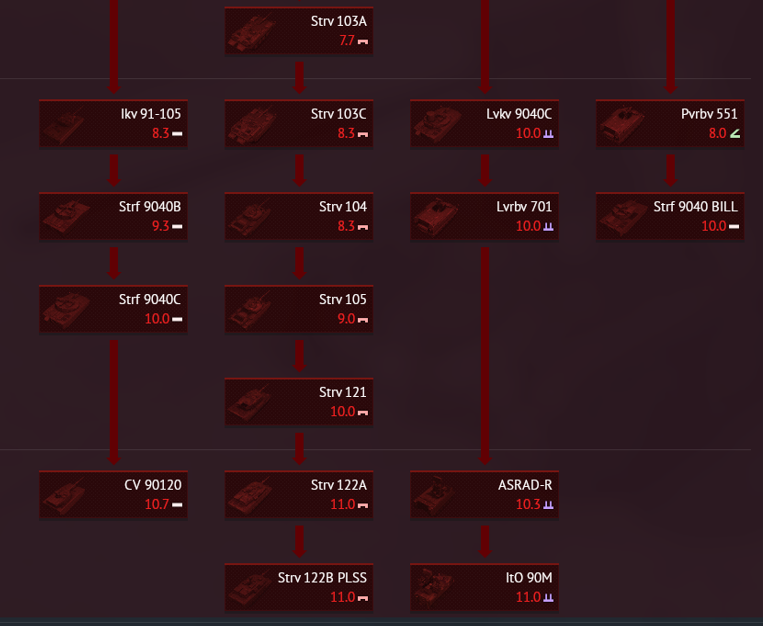 sweeden can be rewarding most of the time beacuse of their unique vehicles. Strfs are decent speed decent armor but with hell of a cannon it’s a 40mm but it shoot APFSDS which means u’ll penetrate all targets with good angle and with insane reloading rate it’s deadly. Strv122s are pretty much the same thing with German Leopards. Ito90M is the same thing that France has. 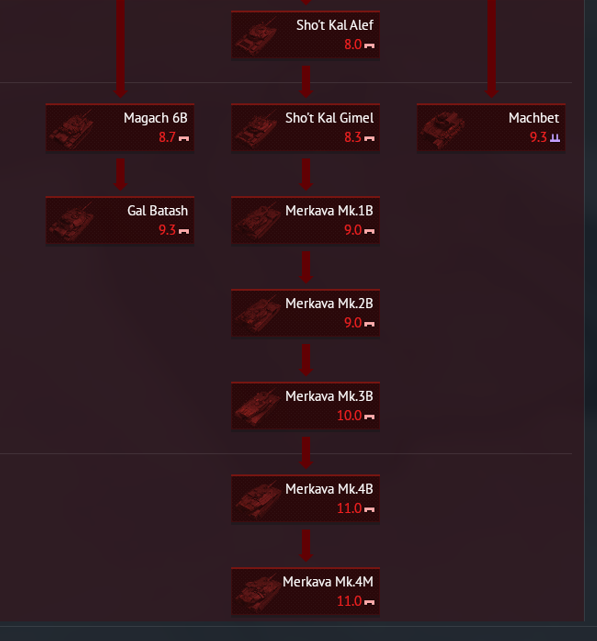 well i’m not really gonna get too deep into this nation since it’s a new one and has less vehicles and u have to grind all of them to unlock the top. Gal Batash is another M60 but advanced but this one diffrent from other ones i actually would recommend going for this beacuse this one more armored and advenced than the other. Merkavas are highly advanced perfect armor perfect firepower but decent speed go for it. And their Machbet SPAA is basically M163 with a couply upgrades on it such as Stinger missiles it’s a good one too.

First One is: Don’t ever give up from grinding i know it’s though to grind to the top but if you give up you’ll never reach there.


Third: Battle Modes are important so if you playing only Arcade; u can actually go ahead and uninstall the game. Take a look at the other game modes too, for example if you play arcade u’re going to gain less money and experience from that battle but if you go and play Realistic battles u’re going to gain more and so Sim games are gonna get you most exp and money.


Fourth: Battle rating is important. If you take a vehicle which is 6.0 into a game of 8.0 u’ll struggle against the vehicles that are more advanced than yours. So try to grind vehicles which are similar as in battle rating ant play with them.


Fifth: in early stage of the game where tanks don’t have good ammo and struggles to pen the other tanks, try to angle your tank and so u’ll ricochet more shots.


Sixth: USE YOUR BINOCULARS WITH ‘B’ BUTTON it is so important when spotting enemy tanks without exposing yourselft. Use it and u’ll see the diffrence.


Seventh: Researching; when researching modifications for your tank go for the one that you need like parts and fire extinguisher.


Eighth: Premium account and vehicles help you out. So u can actually play the game without paying anything but it’ll take more time than a person who paid. And Premium account is the main thing you need while u’re grinding and if you support that with a premium vehicle u’ll get more bonuses.

Best Crew Skills To Use Crew Points On (TANKS)

Crews are very important for your gaming and points are even more important.

So we’ve got the Driver the guy who drinks and drives yes.

on Driver ALWAYS go for Tank Driving And second most important is Vitality and the third is Agility the rest is up to you not really usefull as these ones.


And the Gunner the Chad

firstly we’re going for Targetting and then Rangefinding (IF YOU NEED IT) what i mean by that is you might be chad who doesn’t need ranging and shooting by calculations on your head and if u’re this guy you don’t really need it. And Vitality , and the other one is Agility.


The Loader the guy who smokes at the back


And the Commander the cool guy

so we need Leadership first to get other crewmans skills much higher and then Vitality and next is Agility.


Theese are the most important ones to have on your crewmans. And the others are up to you like i said.

How To Grind Money Easy

I’ve a video about this section so i highly recommend watching it; i’m not gonna get into it from here.

Here we come to an end for the Best Tips For Beginners – War Thunder guide. I hope this guide has helped you with your gameplay. If you have something to add to this guide or believe we forgot some information to add, please let us know via comment! We check each comment manually by approving them!