Have you ever wanted to train a bear in military combat as apart of your desert army, but never really came to a conclusion on how much of a tactical fit bears would be in a world rife with demons and dragons? Then this guide is exactly what you need; this guide delves into the specifics of the Brown Bear unit and its promoted variant in Sands of Salzaar, going over what the Brown Bear as a unit is, what it does, and how it performs. The aim of this guide is to make apparent the advantages and disadvantages of recruiting Brown Bears to the player’s army, and will ideally aid in players trying to get a basic grasp on how to build their armies. That aside, bears are also really cool, and they deserve their own dedicated guide for their appearance in Sands of Salzaar. 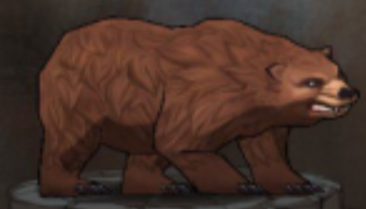 Lao Tzu, the ancient Chinese philosopher and founder of Taoism, once wrote:

“Mastering others is strength.

Mastering yourself is true power.”

While this is true, what the wise old scholar forgot to include is that mastering bears is also pretty sweet, and arguably way more awesome than mastering oneself.


In Sands of Salzaar, regardless of the strength of the player’s unit, a substantial factor in determining the player’s overall military might is the strength of their units in their army. While the named heroes in the player’s party may have strong attributes and skills at their disposal, the backbone of any competent contingent will be devised of the squads of units the player will recruit during their journey through the desert. Sands of Salzaar has a wonderfully diverse and expansive roster of squadrons that the player is able to recruit and obtain, with each having their own special set of stats, skills, and attributes that make them unique. The player would logically need to a*sess the positives and the negatives of a potential squad to determine whether or not the squad is worth recruiting. One such squad the player is able to obtain in their playthrough is the Brown Bear. In this an*lysis, the Brown Bear squad will be evaluated as units; their stats, skills and attributes will be observed, their performance in battle will be discussed, and their potential applications in a given playthrough will be noted. This an*lysis aims to give the positives and negatives of the Brown Bear squad, and their advantages and disadvantages relative to other squads in the game.

What the Brown Bear is: Unit Stats, Traits, and Skills

It would first be appropriate to start this an*lysis by addressing what kind of unit the Brown Bear actually is. The Brown Bear is considered as a T3 unit. The lowest level a Brown Bear can be recruited by the player is lvl 7. The following screenshot depicts the base stats of the Brown Bear: 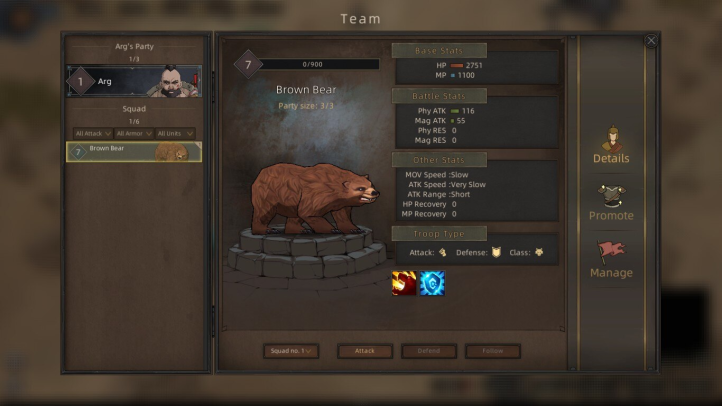 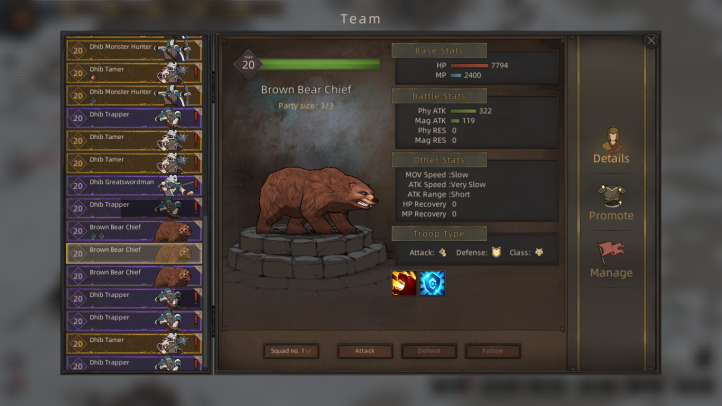 
From what has been said so far, it is understandable if the Brown Bear has made a poor first impression so far. While moderately bulky, it is slow in both movement and attack speed, short on range, and underwhelming in both weapon type and armor type. However, the Brown Bear’s shortcomings are partly made up for by the relatively strong skills at its disposal. The Brown Bear only has 2 skills in its arsenal, but both of these skills are very impressive. The Brown Bear’s first skill is called Iron Skin. Iron Skin is a pa*sive skill that “reduces ranged and melee attacks by 50%”. Because of this phenomenal 50% damage reduction, the Brown Bear possessing the Light armour type is practically a non-issue. In fact, the Brown Bear is effectively more durable than Medium armoured units and often has similar or superior weapon-armour matchups than Heavy, Knight, and Fortified units. With Iron Skin’s 50% damage reduction, the Brown Bear appears to be a durable frontliner capable of taking beating after beating for quite a duration of time.


But what is the Brown Bear capable of doing while soaking up damage for its teammates? Surely the Brown Bear is not just a damage sponge for the rest of the army? As discussed prior, the Brown Bear’s offensive capabilities are relatively limited. While it has a respectable attack stat, its poor movement, attack speed, and attack range hinder its ability to dish out sufficient DPS. Fortunately for the Brown Bear, its second skill allows it to adopt a more supportive role on the battlefield: Growl. Before promotion, the Brown Bear will have Growl I, which “stuns all enemies within 500 cubits for 3 seconds”. The skill has a 15 second Cooldown before it can be used again. This skill is genuinely a great skill for the Brown Bear to possess, as it can effectively disable parts of the enemy frontline, allowing other units in the player’s army to have an easier time dispatching the enemy forces. Upon promoting to Brown Bear Chief, this skill is upgraded rather significantly to Growl II, in which case the range has been increased to 700 cubits and enemies are now stunned for 4 seconds. This understandably increases the Brown Bear Chief’s proficiency as a tank to serve on the frontlines. For the players that would argue that 3-4 seconds is not a lot of time to be stunned for, be reminded of all the instances where the main character was repeatedly stunlocked until they died a rather unpreventable death. 3-4 seconds of being stunned is quite powerful, especially considering that Growl is an AoE skill that can affect multiple enemies.

How to Recruit a Brown Bear Squad

Pertaining to the acquisition of Brown Bear squads, there are two reliable methods of recruiting Brown Bears. The first is via purchasing a squad from a Beast Trainer. The Beast Trainer Gael, who can occasionally be found in town Taverns, will always try to sell the player a lvl 7 Brown Bear squad. 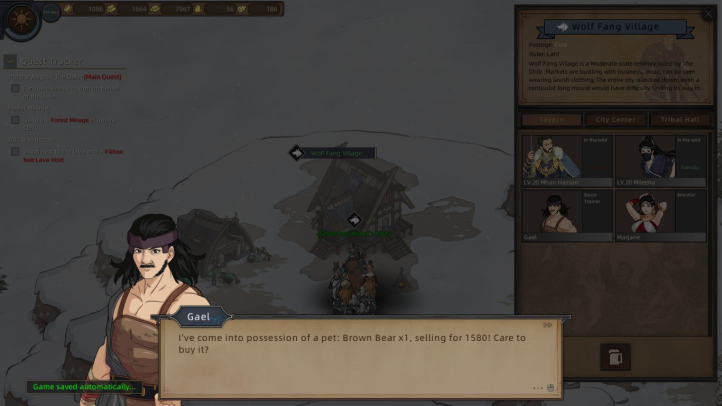 How the Brown Bear Functions in Battle

So far, it has been made apparent what the Brown Bear unit is and how these squads can be attained. But how does the Brown Bear serve in battle in practice? While ideally the Brown Bears would serve as the vanguard of the army, their overall horrendous movement speed makes it difficult for them to actually get to the frontlines in a timely fashion. Additionally, their relatively big size makes them more prone to being body-blocked by other units, further exacerbating the issue of Brown Bears getting to the fight. Once they do reach the frontlines, however, they can adequately serve as stalwart shields from enemy melee and ranged units, taking repeated hits from the enemy while offering support in the form of AoE stuns in the Growl skill. Brown Bears, like many other units, are still vulnerable to magical attacks, and their prodigious size makes them more susceptible to being caught in enemy AoE attacks. Unlike melee and ranged attacks, Iron Skin will not reduce the amount of damage the Brown Bears take from magic damage. Despite the slow movement and the weakness to magic attacks, however, it should be emphasized that Brown Bears are still great tanks to use once they get to the frontlines, and they can be a valuable a*set to an army should they have teammates that can benefit from the Brown Bear’s abilities to soak damage and dish out AoE stuns in return. In particular, ranged units that can take advantage of using the tanking capabilities of the Brown Bear benefit greatly from having a durable frontline, and healers that can further bolster this frontline are especially appreciated to reinforce the Brown Bear’s survivability. In regards to the Brown Bear’s damage output, it is relatively mediocre due to a few reasons. First, its poor movement speed, attack speed, and attack range make it difficult for the Brown Bear to deal damage efficiently in the first place. Second, the lack of damage-dealing skills in the Brown Bear’s arsenal means that the Brown Bear is reliant purely on auto attacks to deal damage. Third, the max unit capacity for Brown Bear squads is 3, which is relatively low compared to other squads that often have around 5. Compared to other T4 units, the Brown Bear Chief will generally deal below-average damage throughout a battle.

Conclusion: The Pros and Cons of the Brown Bear

Overall, the Brown Bear as a unit definitely has its pros and cons. While they can serve as bulky frontliners capable of applying devastating AoE 4 second stuns, certain features of the unit may hold it back from performing as one would want it to. To end off this an*lysis, the following is a list of advantages and disadvantages of the Brown Bear compared to other units; essentially, the reasons why the player should use the Brown Bear and the reasons why the player should not.

– Iron Skin providing 50% damage reduction against all melee and ranged attacks, in addition to the Brown Bear’s respectable hp stat, makes the Brown Bear quite durable compared to other melee frontliners

– Only requires 3 levels minimum to promote into its final cla*s in T4.

– A relatively cheap T4 unit to use. Promoting to Brown Bear Chief only requires Wood, and restoring troop capacity likewise only requires Wood. In comparison, other melee T4 units may require the much more valuable Jade in order to become promoted and in order to sustain the number of troops.

– Should the player wish to utilize an army predominantly composed of Beast type units, the Brown Bear is capable of benefiting from the Friend of Beasts talent for +10% ATK and +10% HP.

– Low movement speed also makes it difficult for the Brown Bear to reach the frontlines in a timely fashion.

– Max troop capacity of 3 is underwhelming.

– Being limited to a T4 cla*s makes it a less appealing option compared to other melee frontline units that can promote to a T5 or even T6 cla*s.

This is all we can share for Brown Bear Unit Analysis – Advantages and Disadvantages Guide – Sands of Salzaar for today. I hope you enjoy the guide! If you have anything to add to this guide or we forget something please let us know via comment! We check each comment! Don’t forget to check SteamClue.com for MORE!