This guide contains the locations and actions needed for all the secrets in Cave Quest 2. There are 27 in total, and finding all of them will award you the Seeker achievement. There are 20 in the main game and 7 in the bonus game. It is important to note that the secrets are not just objects you find. While most of them are scrolls you uncover by moving other objects around them, some of them are other types of reading material and others are “good deeds” which I will go into detail about below. I’ve tried to put them in chronological order, but some you cannot get until you’ve earned certain skills, and some scenes contain multiple secrets. I hope this guide helps and please let me know if I’ve made a mistake anywhere or if you have any tips for other players about the secrets!

1) Forest Road scroll – you will need to click on one of the tree branches on the left side of the screen and the scroll will fall from the branch. To know you have the right branch, two turning gears will appear under the mouse pointer. 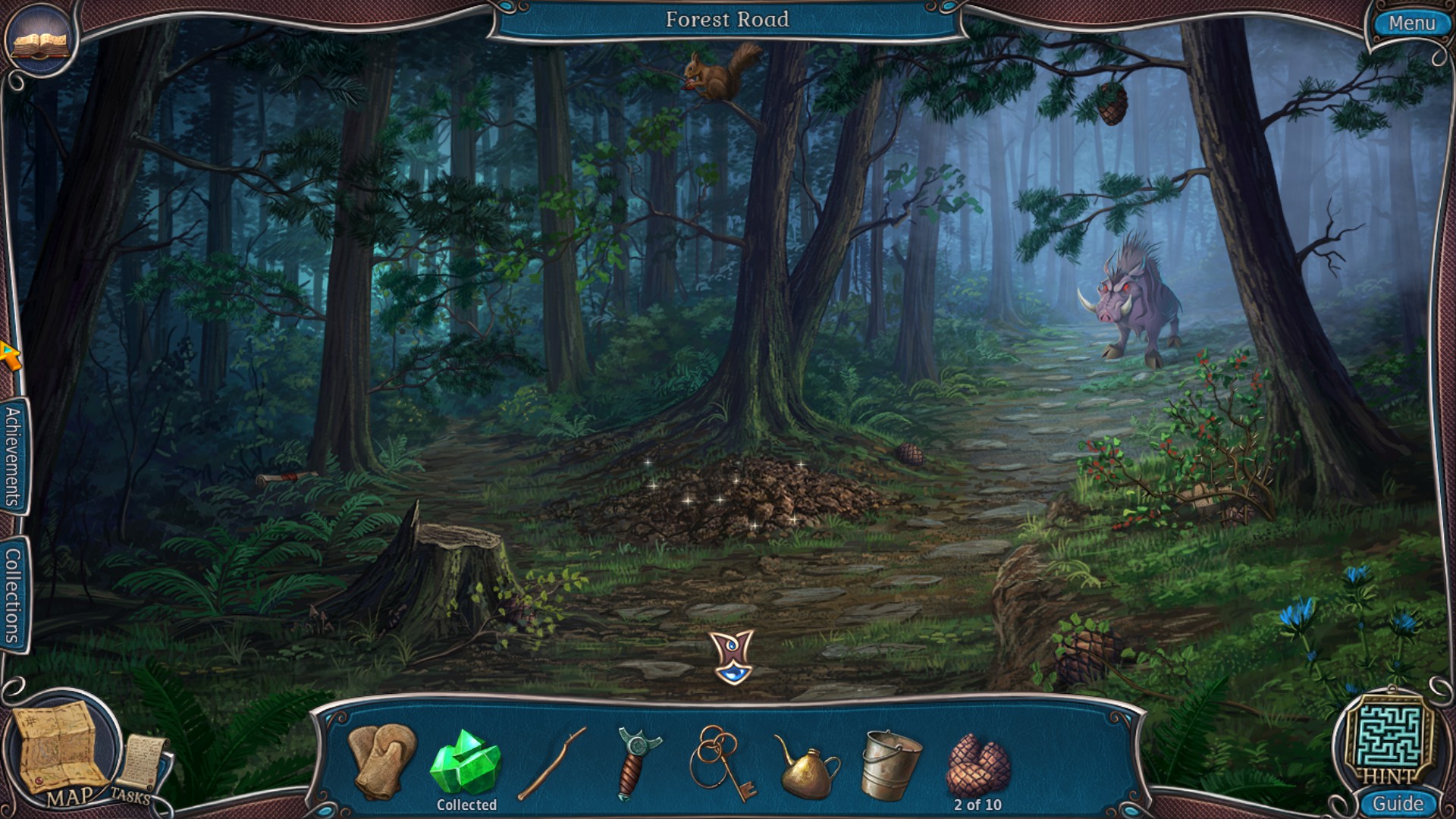 2) Cave scroll – To access this scroll, you’ll first have to use the long stick to clear away the spider web on the right side of the screen. Once that’s done, there will be a small rock at the base of the cocoon that you click on, and it will move aside to reveal the scroll. 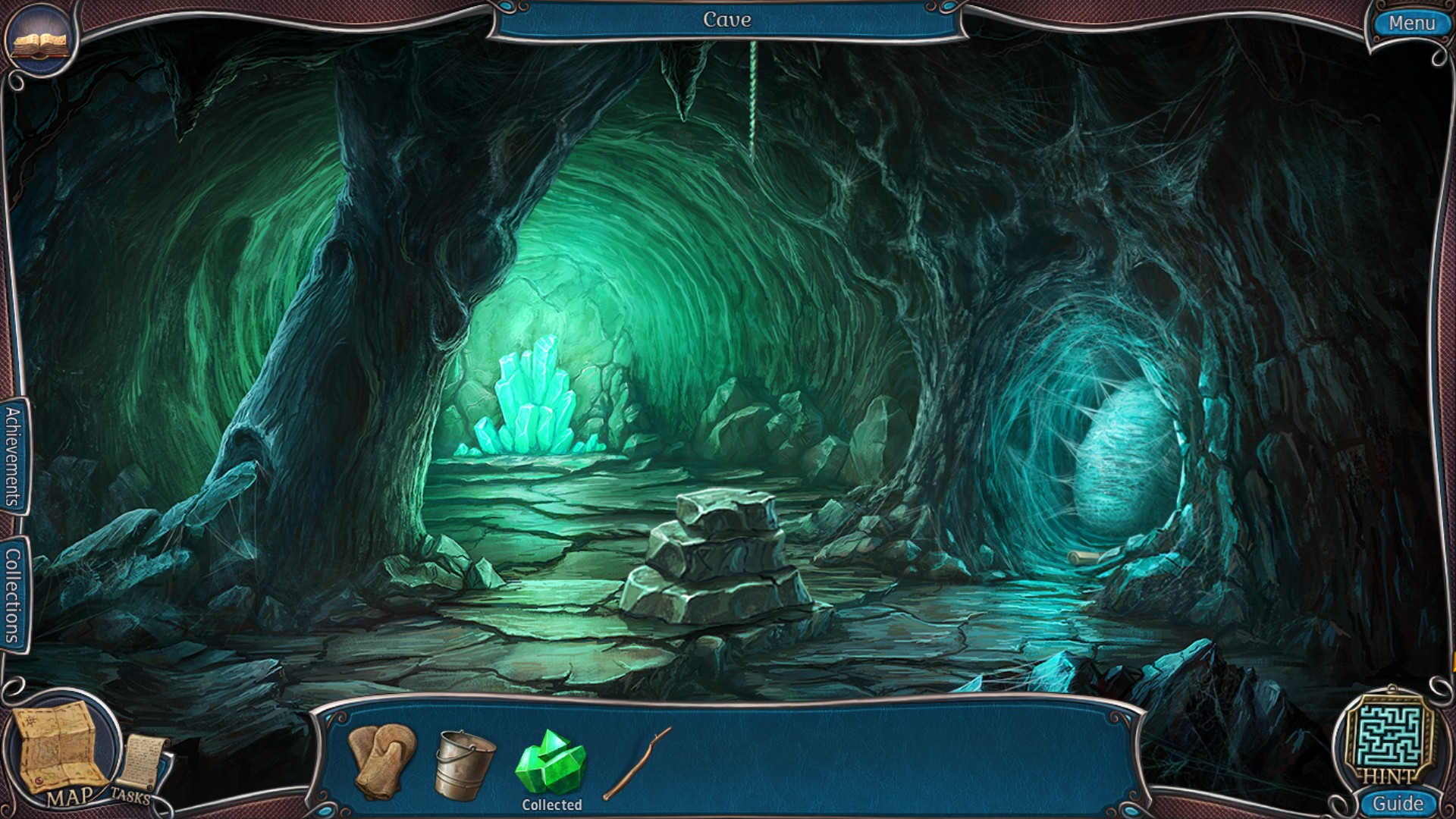 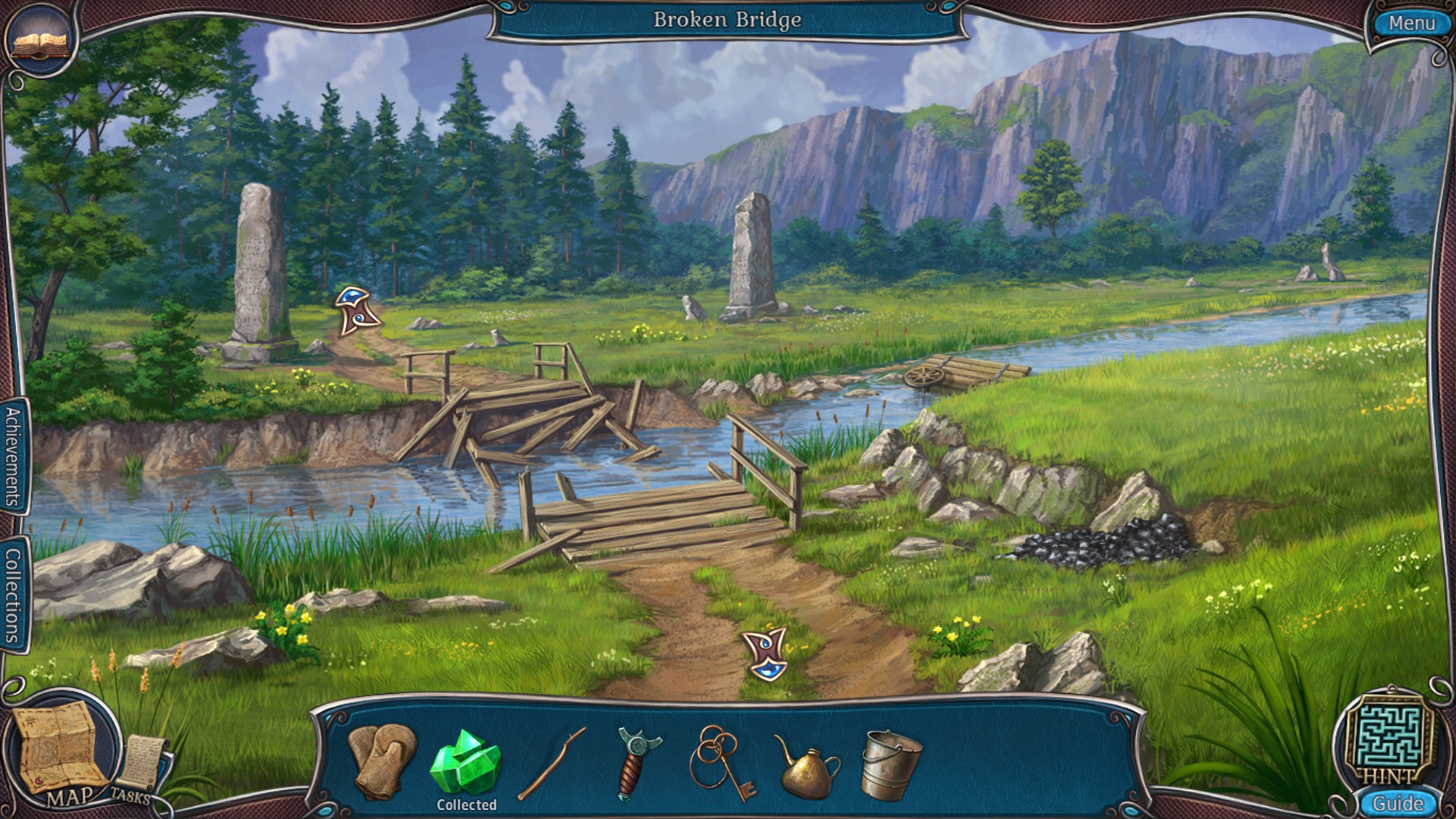 5,6,7) Three books in the Druid’s Dwelling – On the shelves on the right side of the cabin are three books; red, green, and blue. The green book is the first one you can get, but it requires level one of the wisdom skill (this skill’s picture looks like an open book laid face up). The red book can be read when you get level 2 of the wisdom skill. The bluebook cannot be read until near the end of the main game, when you acquire from the mayor a dictionary in the ancient language. Once you get the dictionary, take it to the druid’s cabin and click on it, then move your cursor to the blue book and click again. 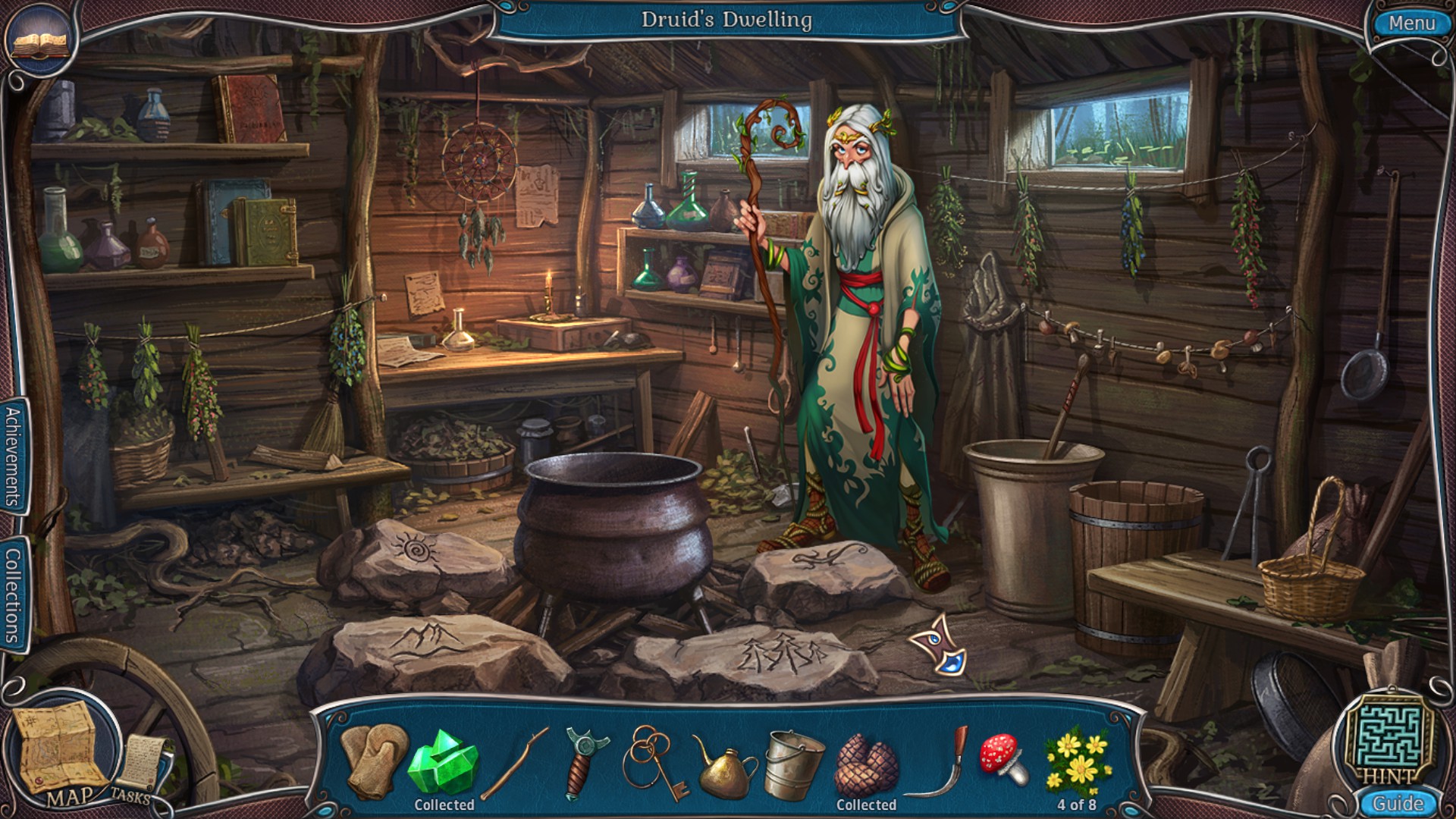 8) House Key – After returning the blacksmith from the demon world with the potion, you will give him his house key. This may not work until you’ve spoken with him and he has specifically asked you for the key before you can give it to him. This key is the “iron key” that you find hanging above the furnace in the forge. 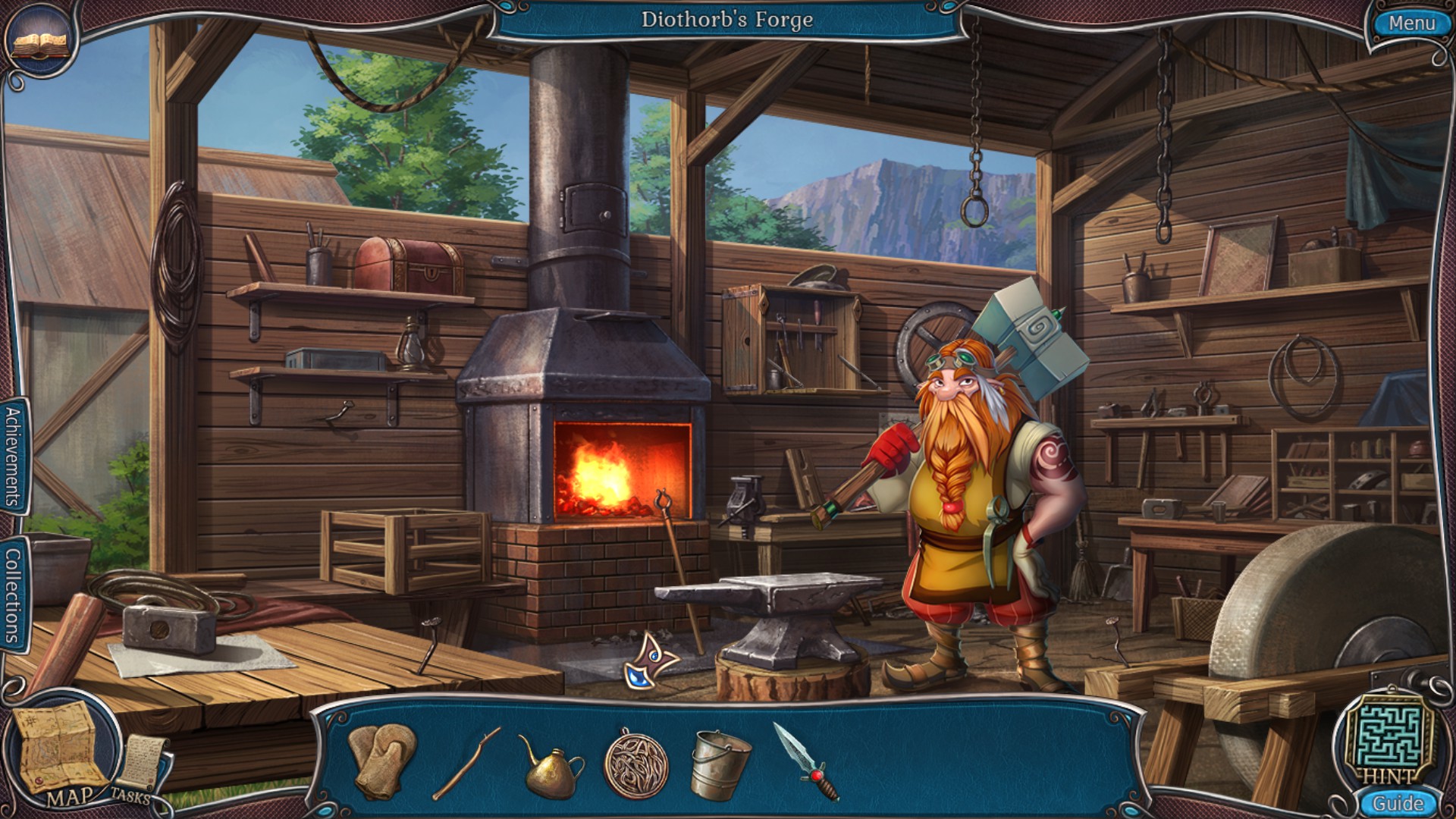 9) Scroll in the fog – This is the hardest one to get in my opinion. This scroll only appears in one particular scene in the fog, and the scene pops up randomly when you are wandering around. You will get to this scene completely by chance, and will have to wander in the fog more than once to find it. IT IS NOT GUARANTEED THAT THIS SCROLL/SCENE WILL SHOW UP WHEN WANDERING THE FOG. Out of the five times I played through the main game, the scroll only showed up two times when I didn’t actively search the fog for it. You may have to stop your general game play to wander the fog extra times to get it to show up. It is also very easy to walk right past it as you are focused on which arrows/direction you want to go. If you reach the part where the game says “You have now learned your way through the fog” and you haven’t gotten this scroll yet, you’re out of luck and have to try for it on your next play through. The scroll is sitting on a rock on the bottom right of the screen. 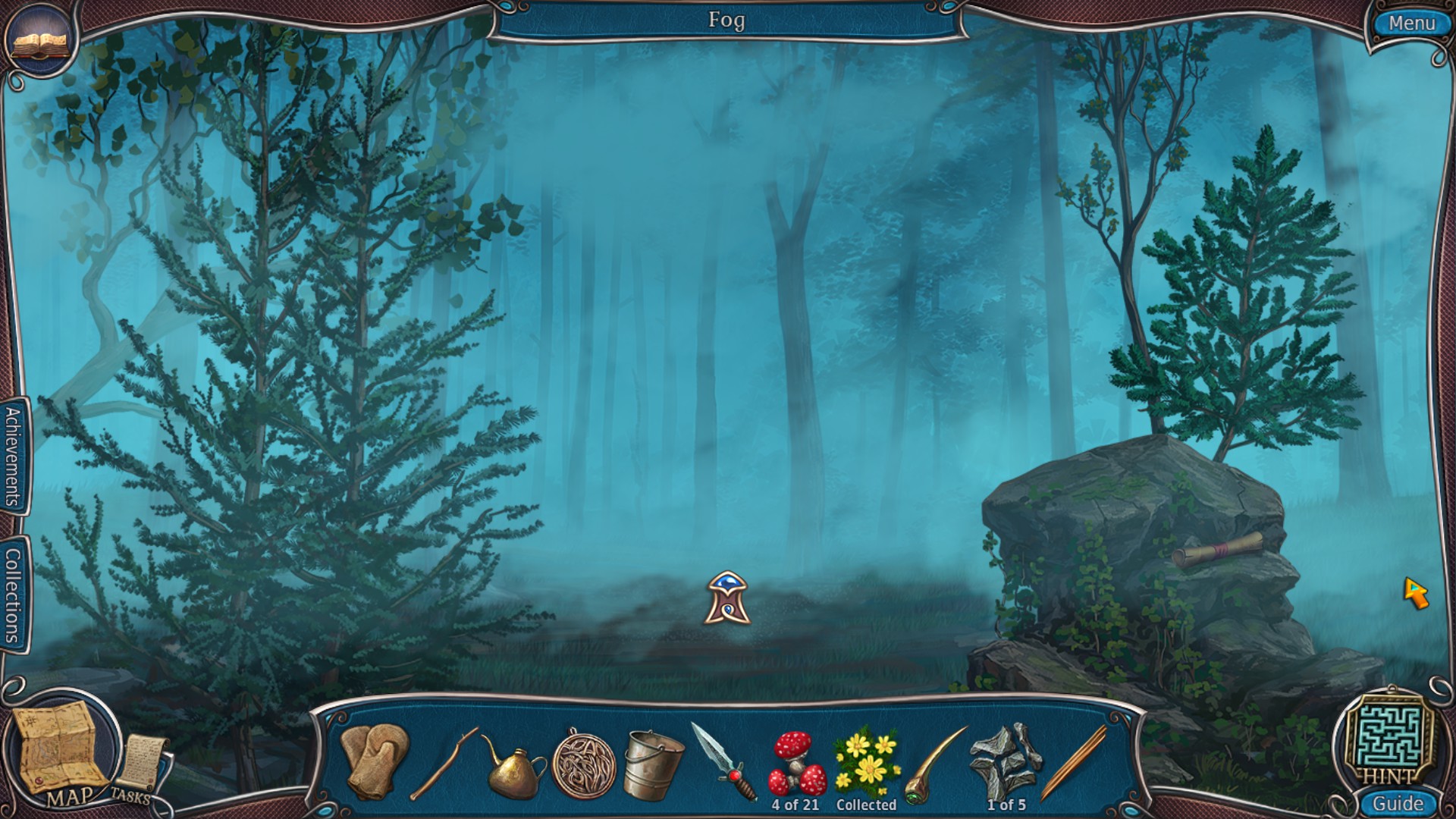 10) The Glow scroll – The next secret is by the second portal. There is a large rock to the bottom right of the screen. To access the rock, you will first have to clear the branches away. Even after you do that, you will still have to get level 1 of the power skill before you can move the rock to get the scroll underneath. (The power skill looks like an armored fist). 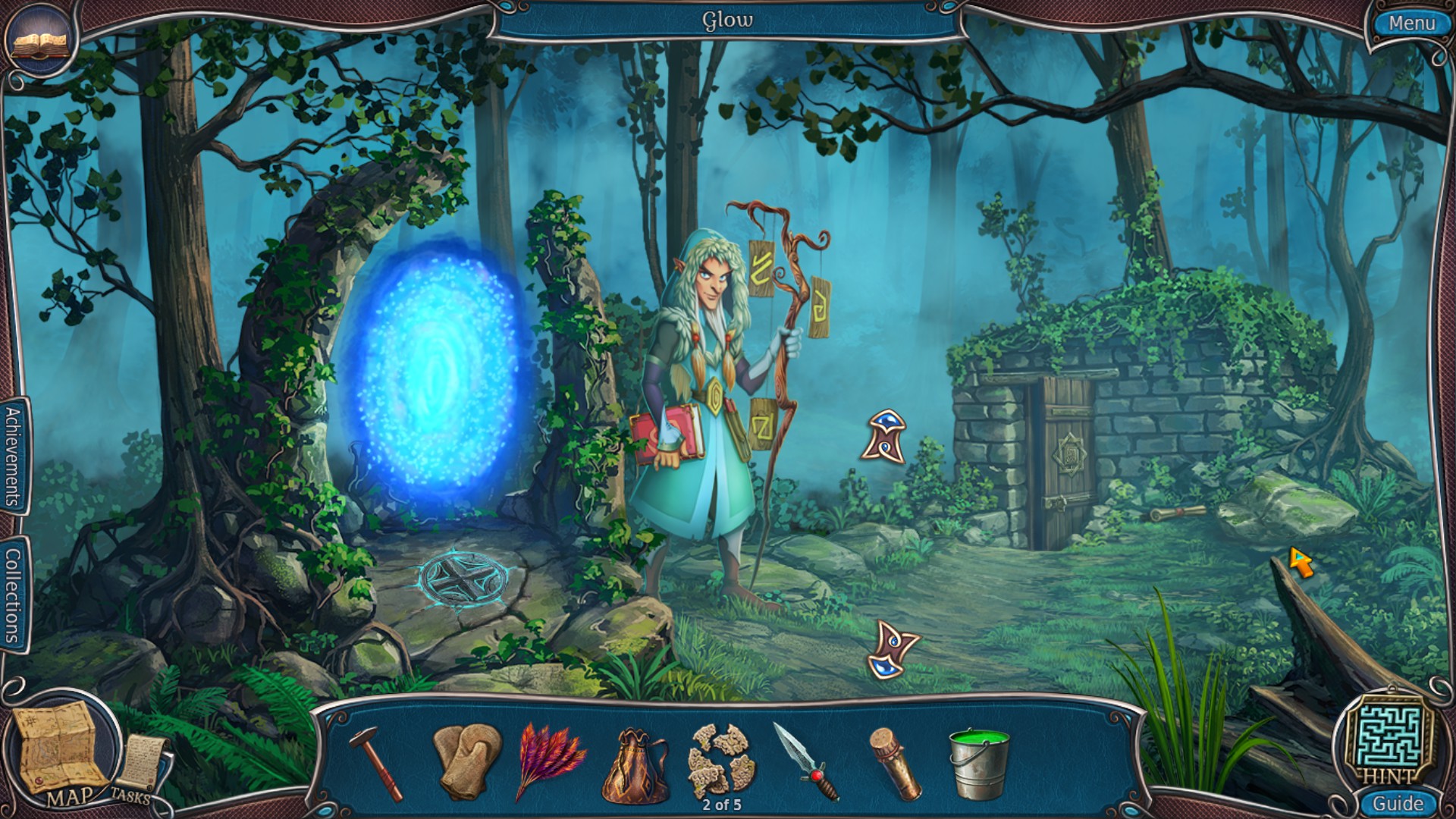 11) Logging area scroll – This scroll is hidden under two branches that you just click to move aside in the middle background of the logging area. 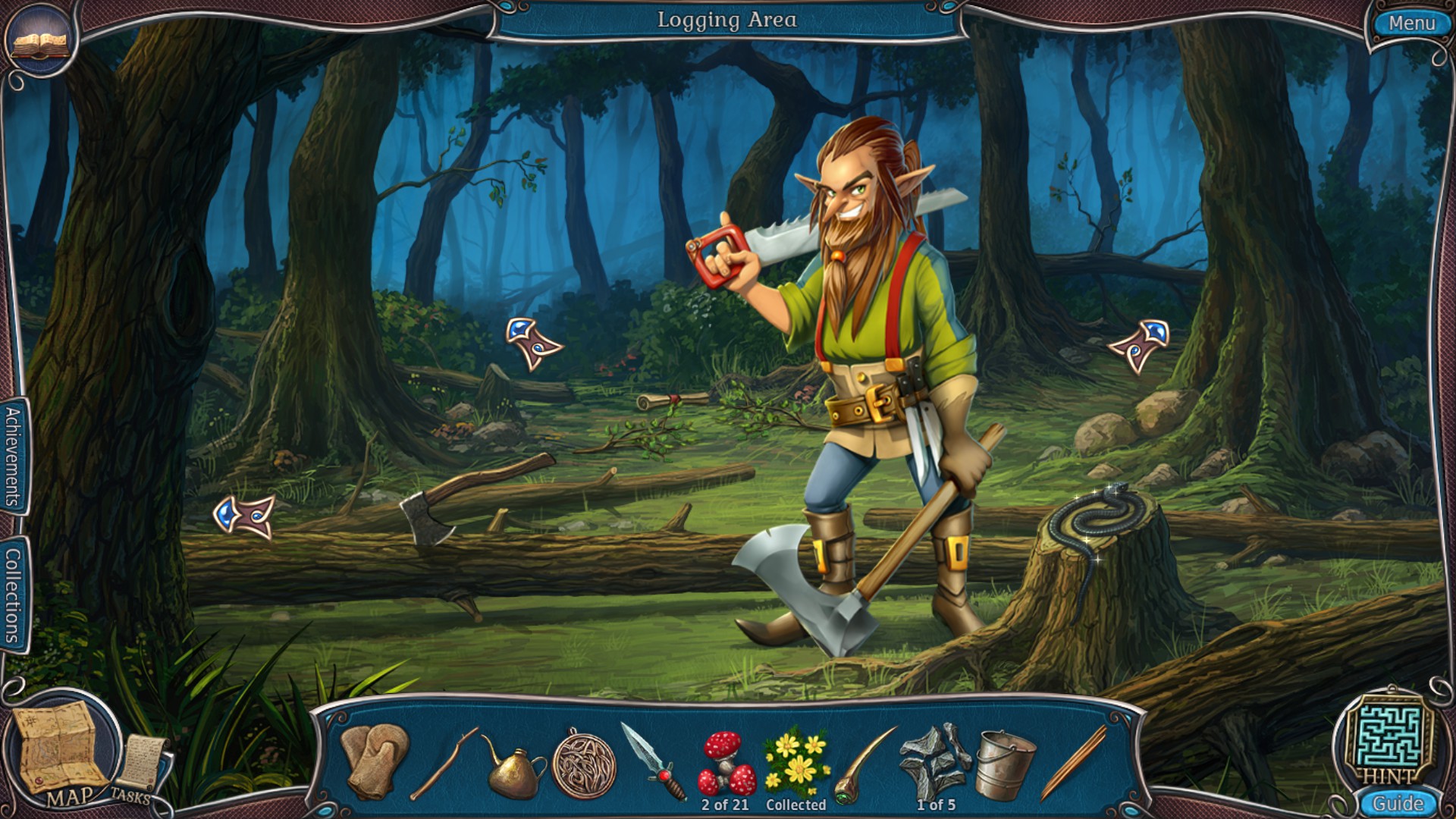 12) Wooden box book – Once you dig up the wooden box at the forest road and open it, there is a book to the far right of the box. All you have to do is click on it. 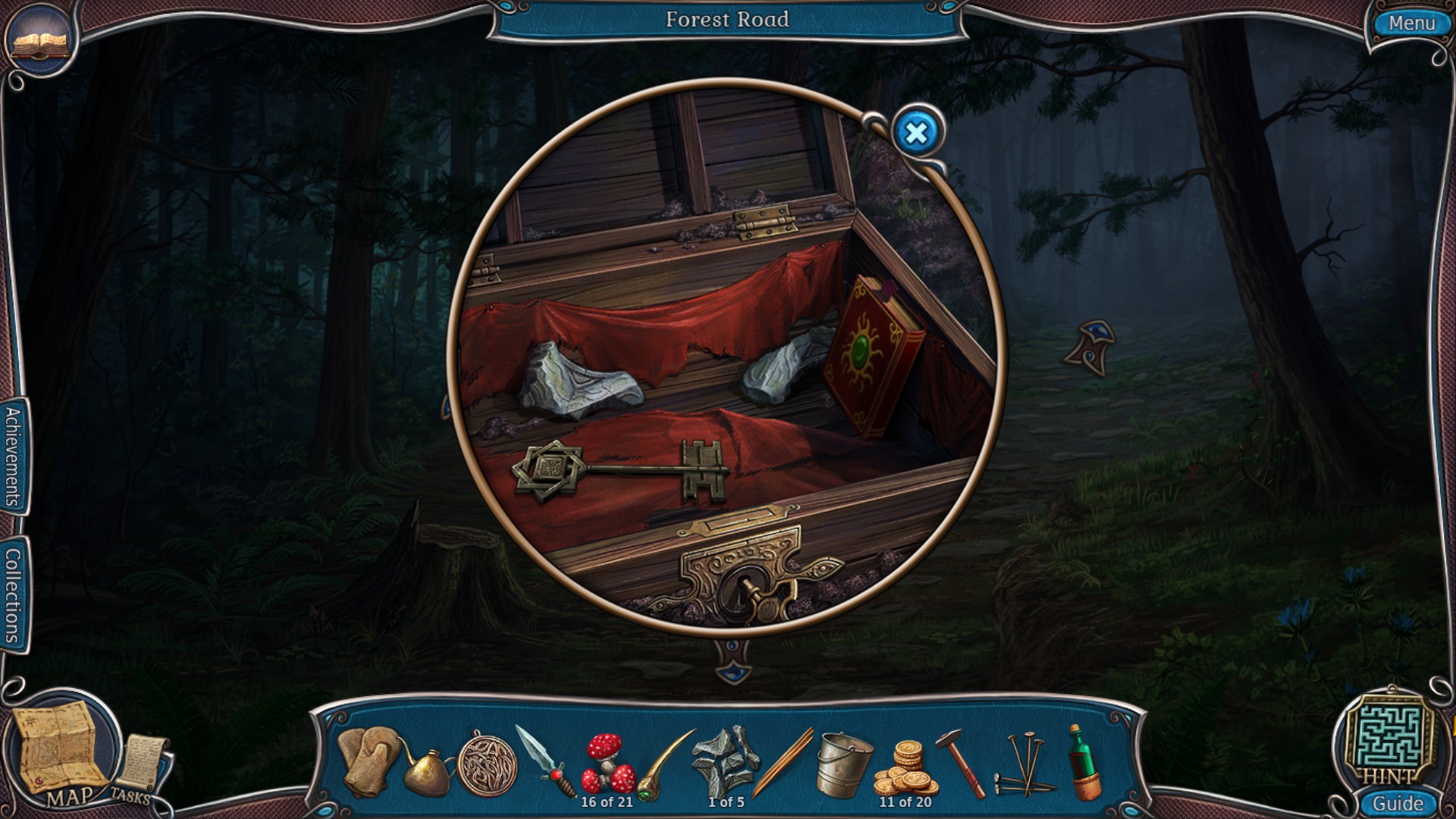 13) Flower Meadow scroll – This scroll is hidden behind a blue cloth in the hollow of the tree in the flower meadow. You will logs from the logging area and hammer and nails from the forge to make the stairs to reach the hollow. The blue cloth covering the scroll is to the right side. 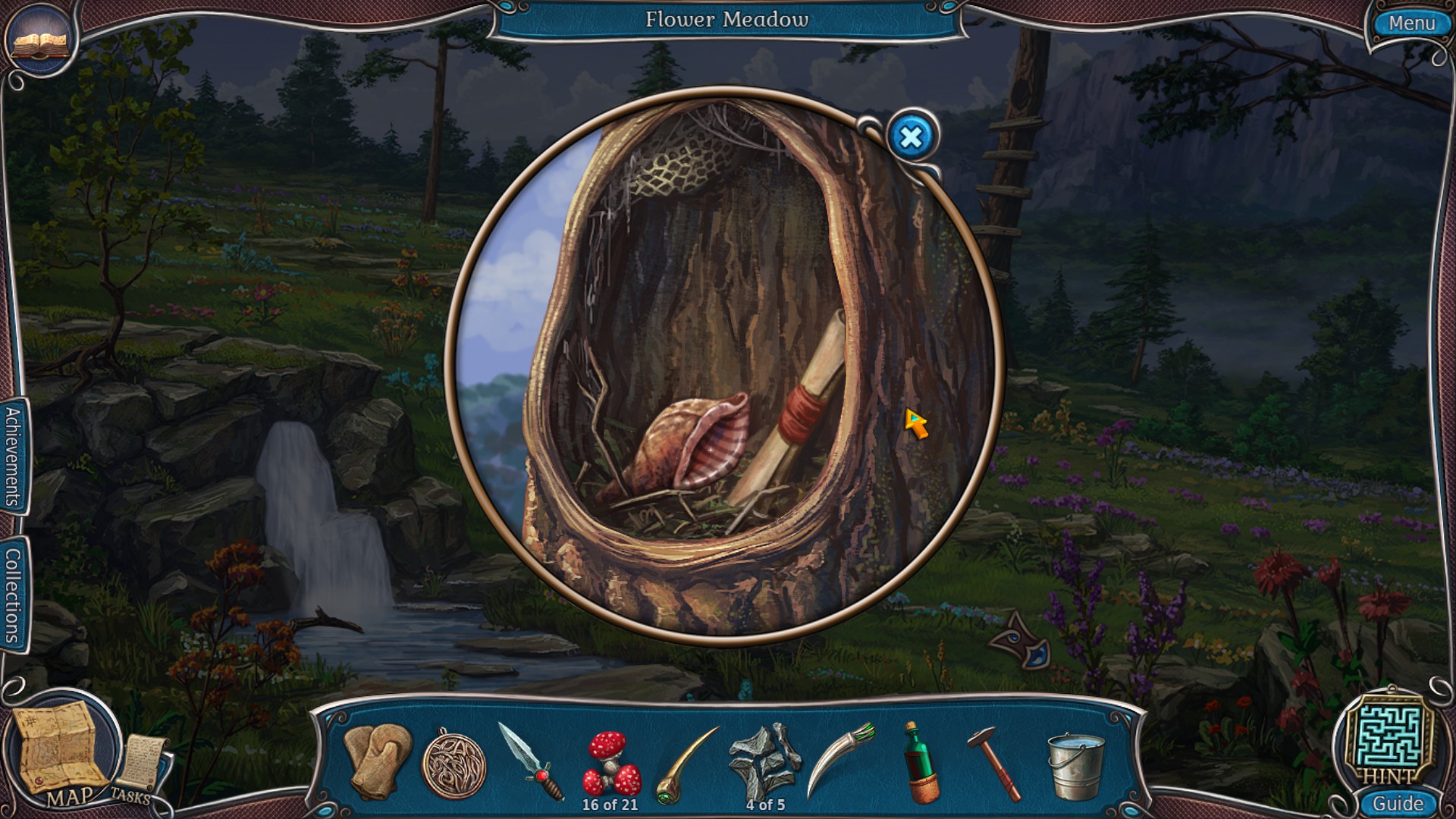 14) Citadel scroll – To the left of the guard at the base of the citadel is a stone pot. Click on the pot to move it aside and get the scroll. 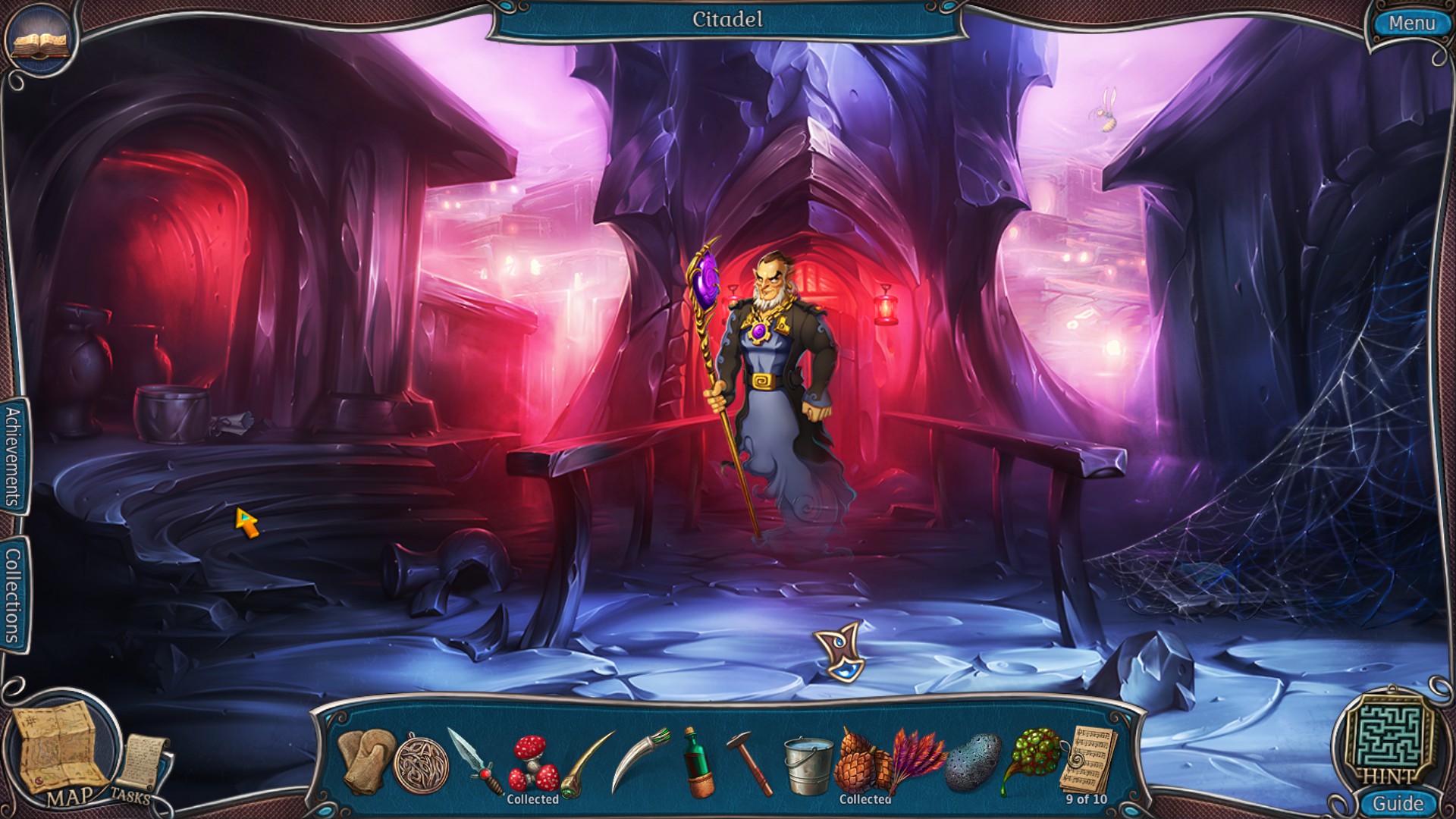 15) Omun Taere Tower scroll – On the left side of the left pool of water is a small stone slab. Click on it to move it and get the scroll. 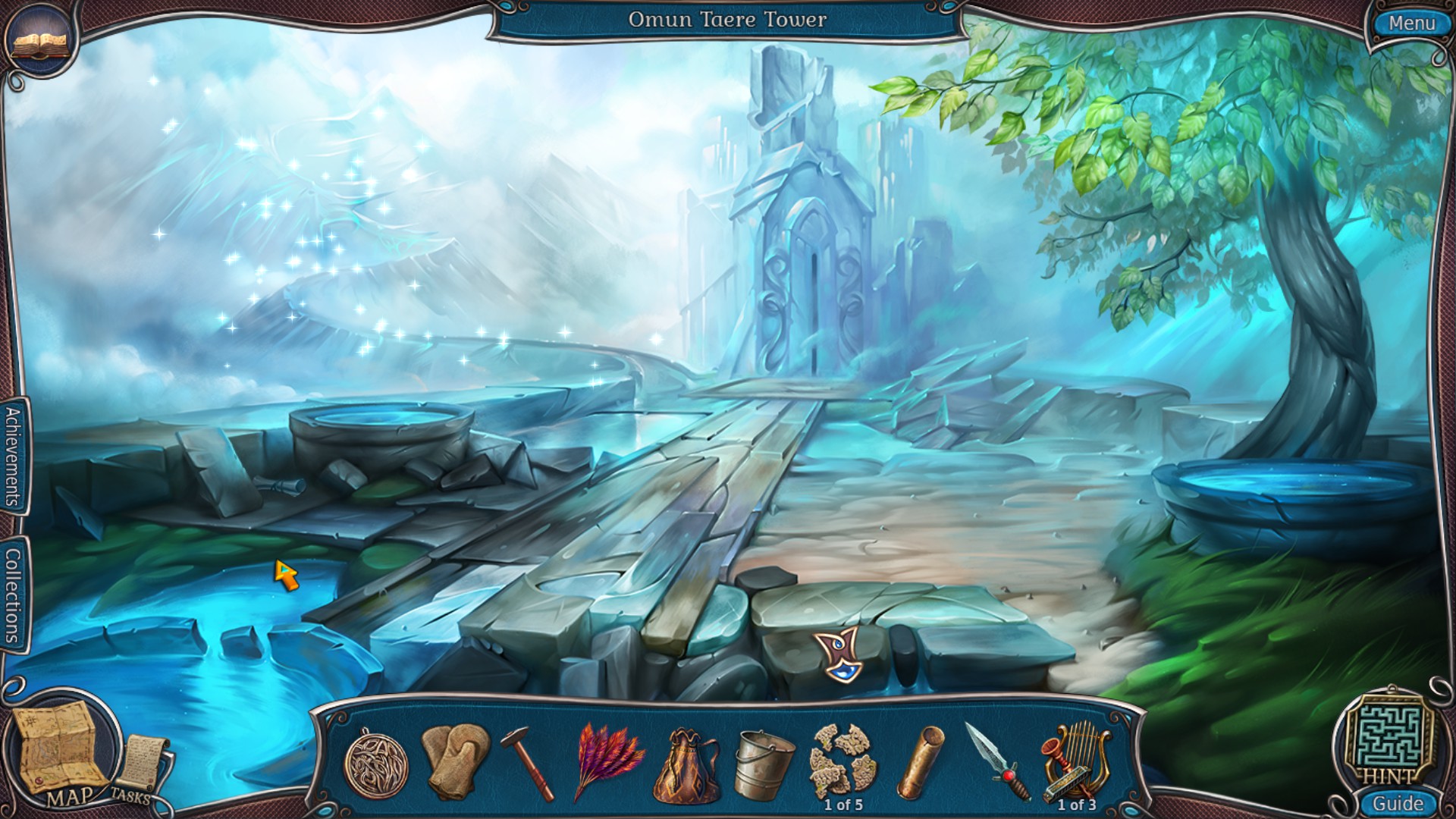 16) Mountain side crystal ball – To get this secret, you’ll have to continue game play until the character leaves. Behind where they were standing is a bush with a blue crystal ball. You also have to have level 1 of the sorcery skill to pick it up. 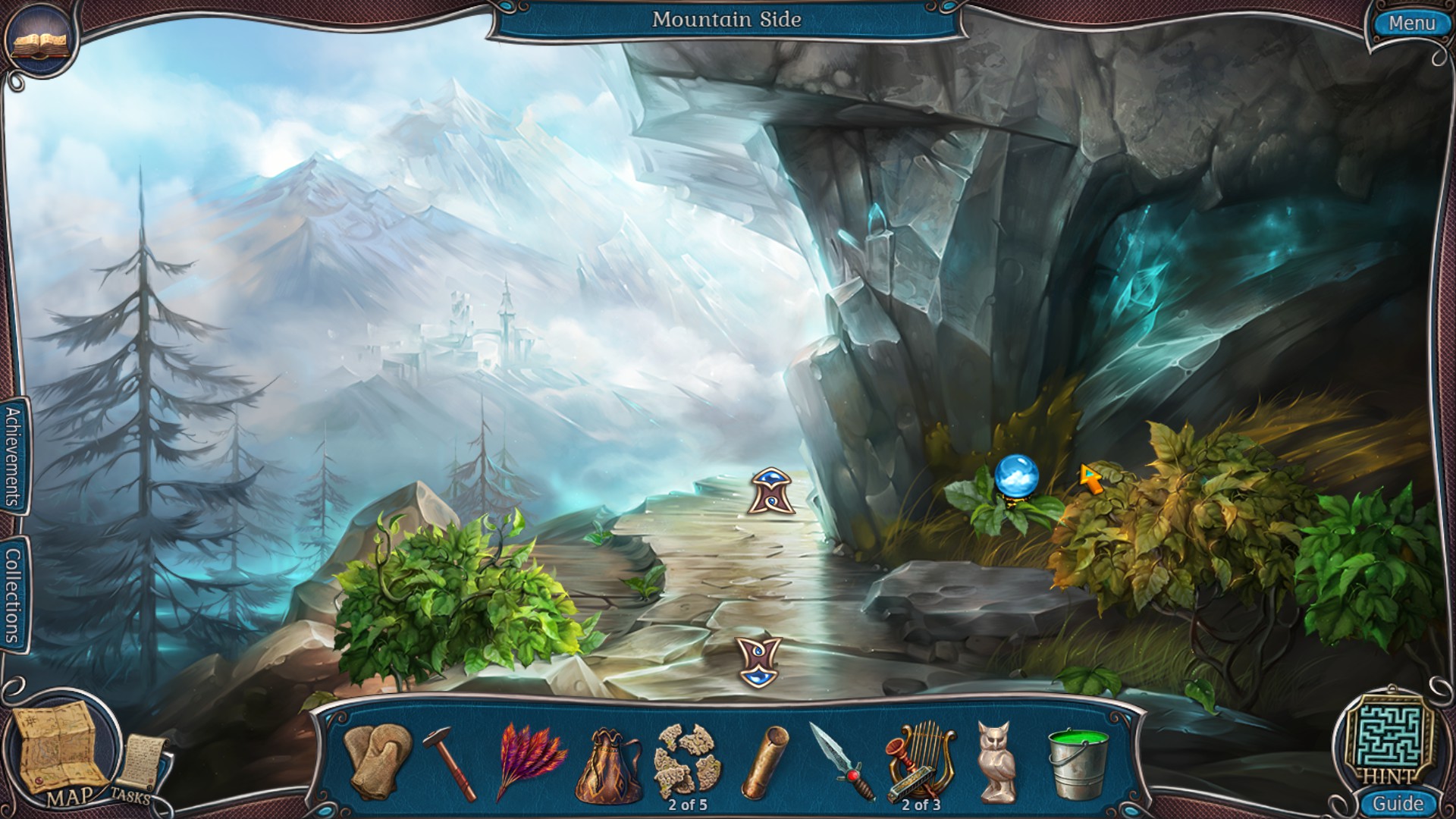 17) Artist’s Workshop scroll – To get this scroll, you’ll first have to use the hammer to repair the shelves on the right side of the screen. Once you that, under the shelves is an empty pot. Click the pot to move it aside and get the scroll. There is another secret here but you won’t get it until the bonus game, so I’ve included it in the bonus game section. 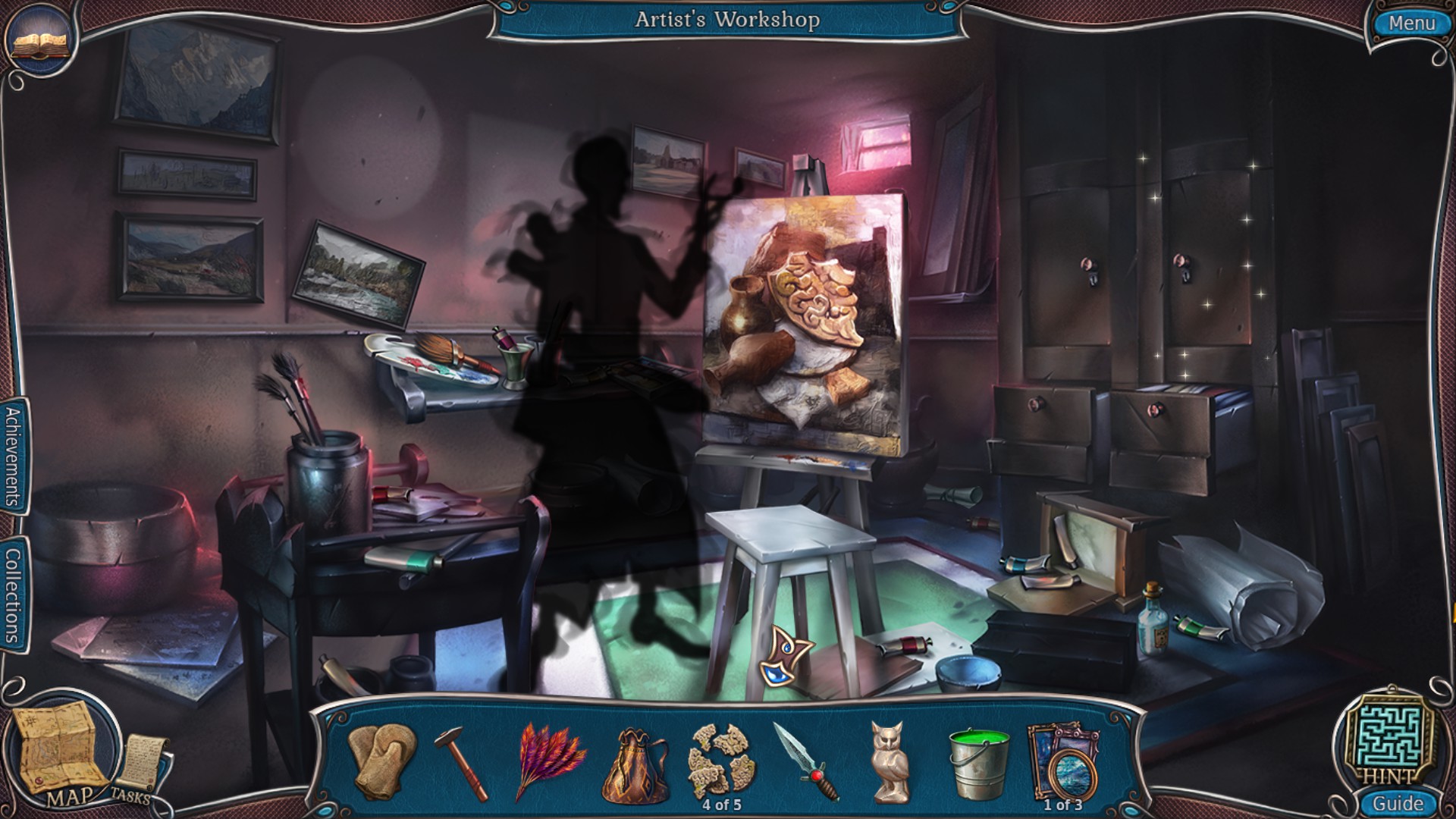 18) Navidan’s Room crystal ball – Under the desk in the mayor’s room is a bunch of rolled up paper. Click on the paper to move it aside and get the clear crystal ball. 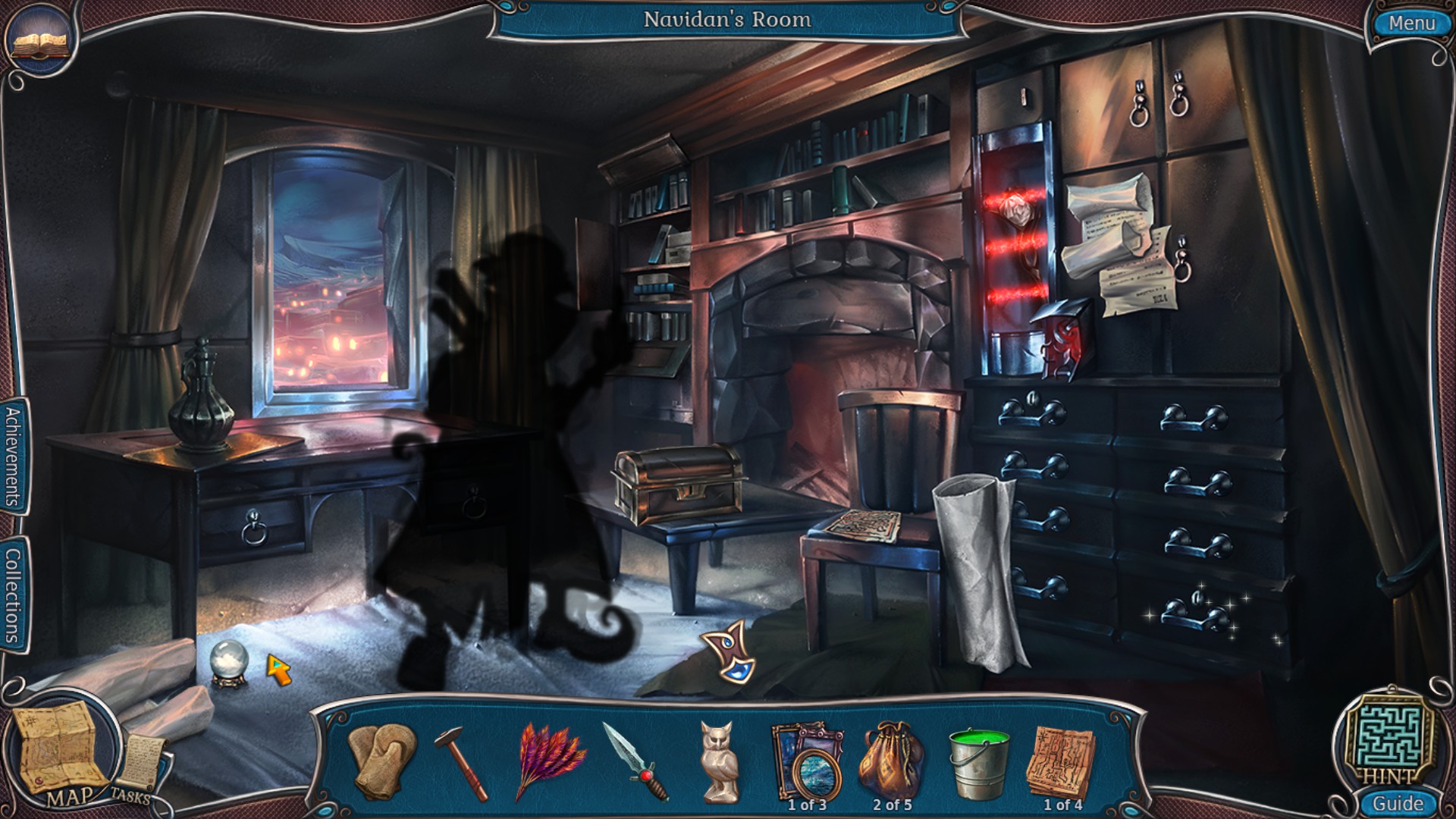 19) Red Energy Source scroll – At the top left of the screen, sitting on top of the pipeline, is a scroll. You will first have to turn off the energy source before you can get this scroll. 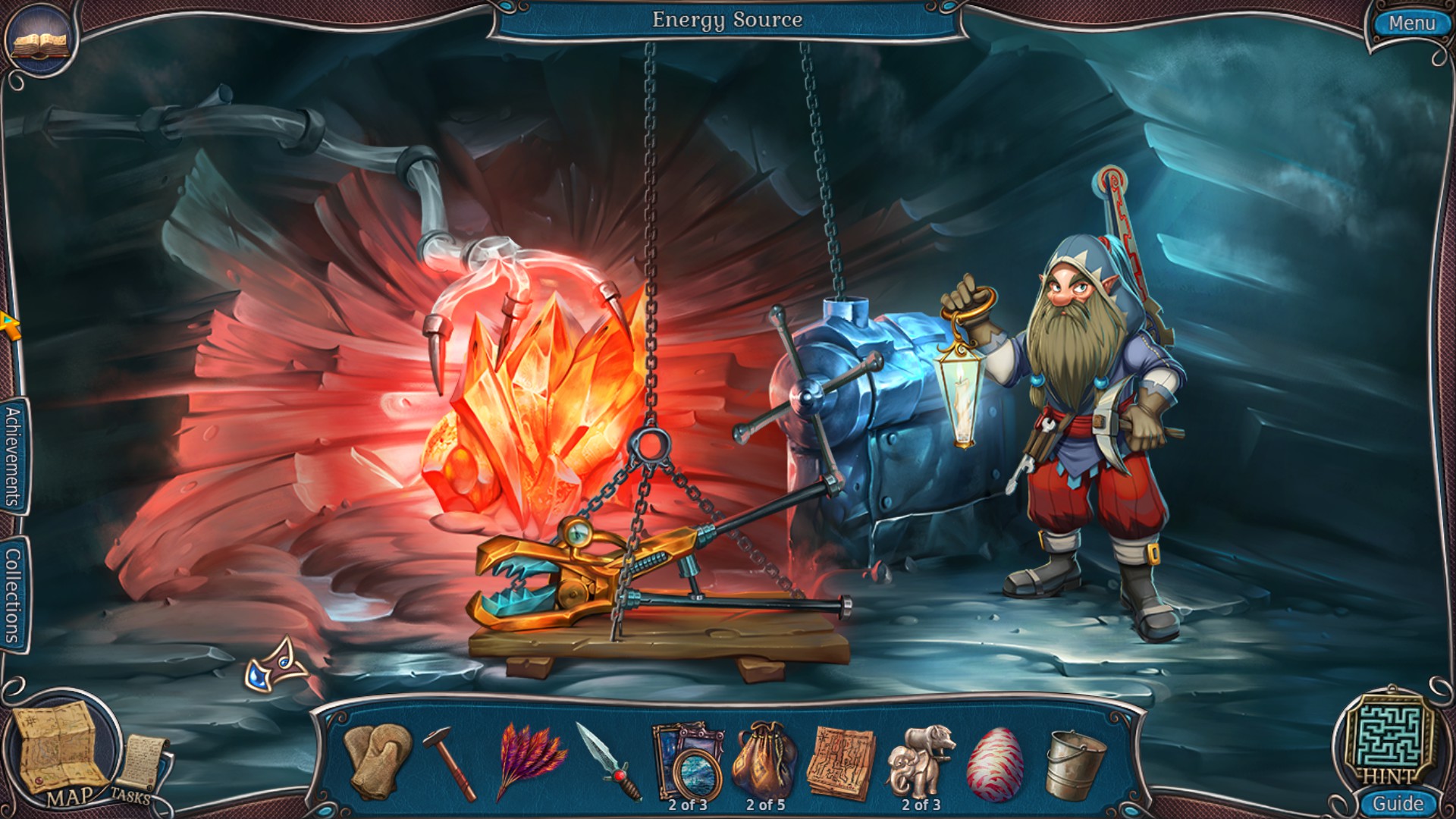 20) Mines scroll – To get this scroll, you first have to defeat the two-headed lizard. Beneath the lizard are broken egg shells. Click on the egg shell to move it aside and get the scroll. 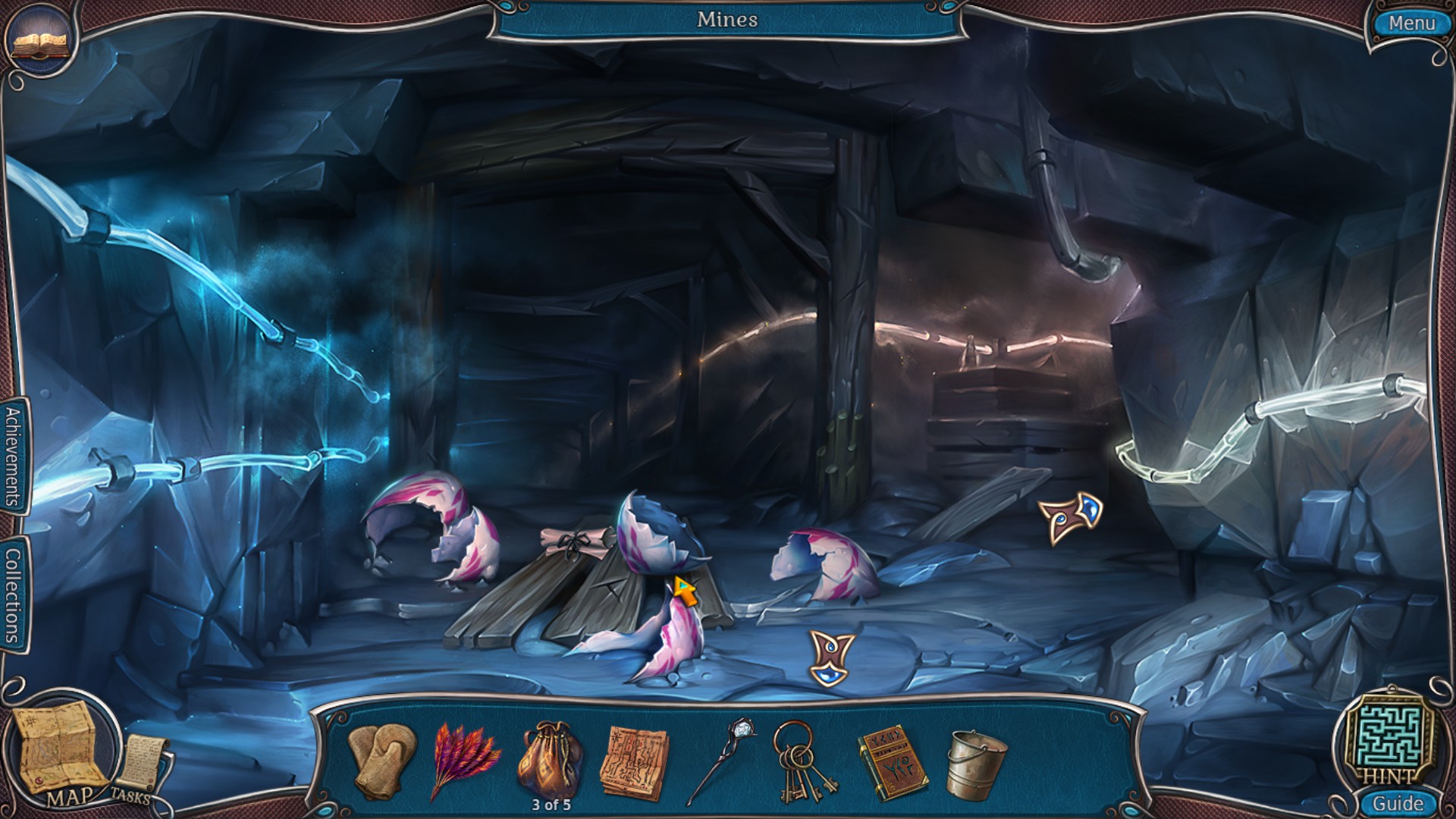 1) Good deed to blacksmith – Go to the temple and use the empty bag to scoop up a bag of treasure. Take this bag to the blacksmith and give it to him. He will take the gold and you will keep the empty bag.


2) Good deed to artist – Go to the artist and give him back his workshop keys.


3) Good deed to jeweler – Give two bags of gold to the jeweler. You will have to fill the empty bag up twice with the temple treasures gold to give him. You can give him additional bags of gold but this does not give you any additional achievement or items.


4) Good deed to the hunter – Once you’ve revived the hunter in the forest, you will give him a “Big Feather”. He will ask you to catch the bird for him. You don’t do this, but during your game play in the bonus game, you acquire two more “Bright Feathers”. Give these to him.


5) Mushroom Outskirts scroll – After you defeat the porcupine in the forest (again), you will reach the mushroom outskirts to pick more mushrooms. At the bottom left of the screen is a scroll. 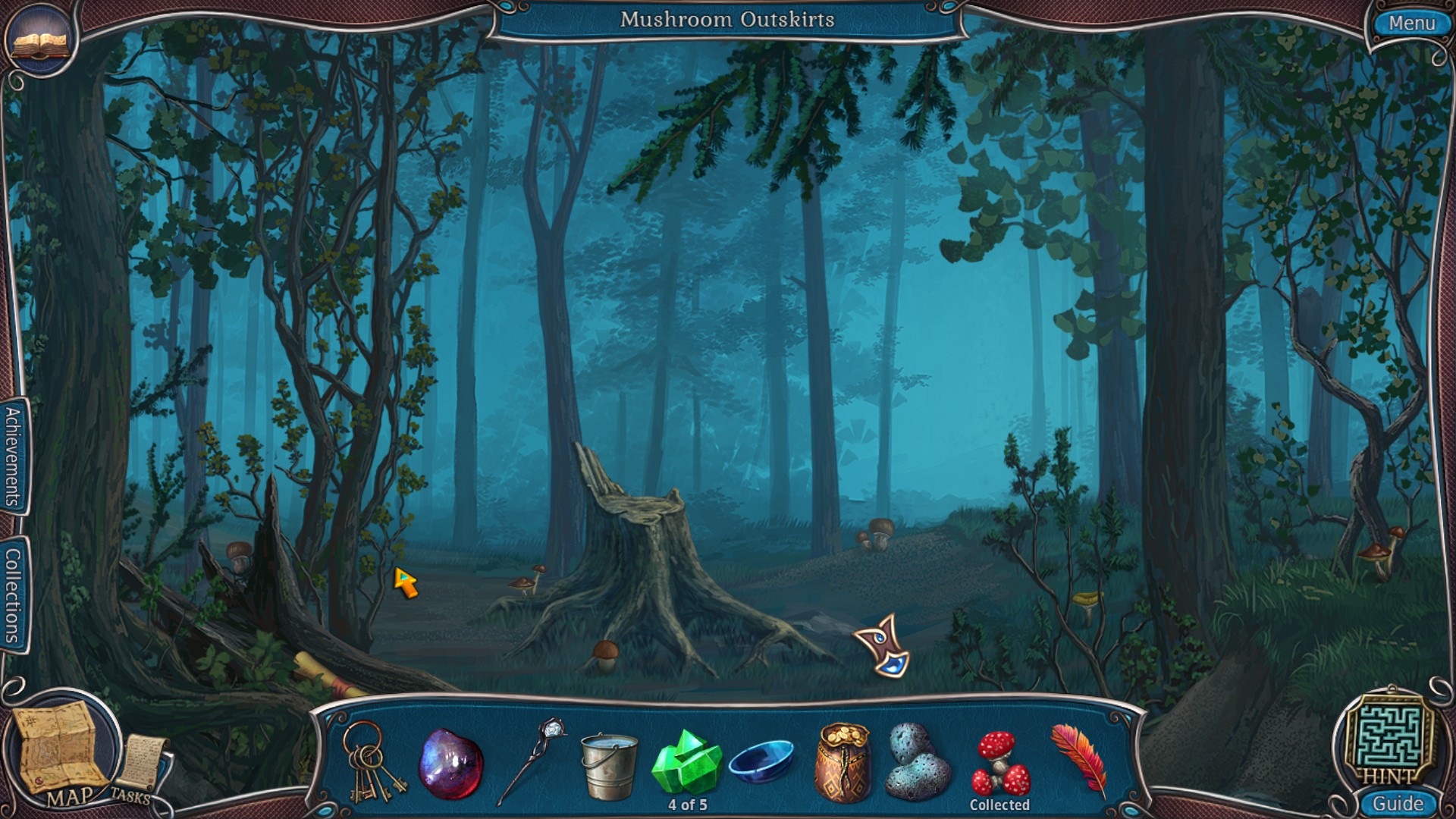 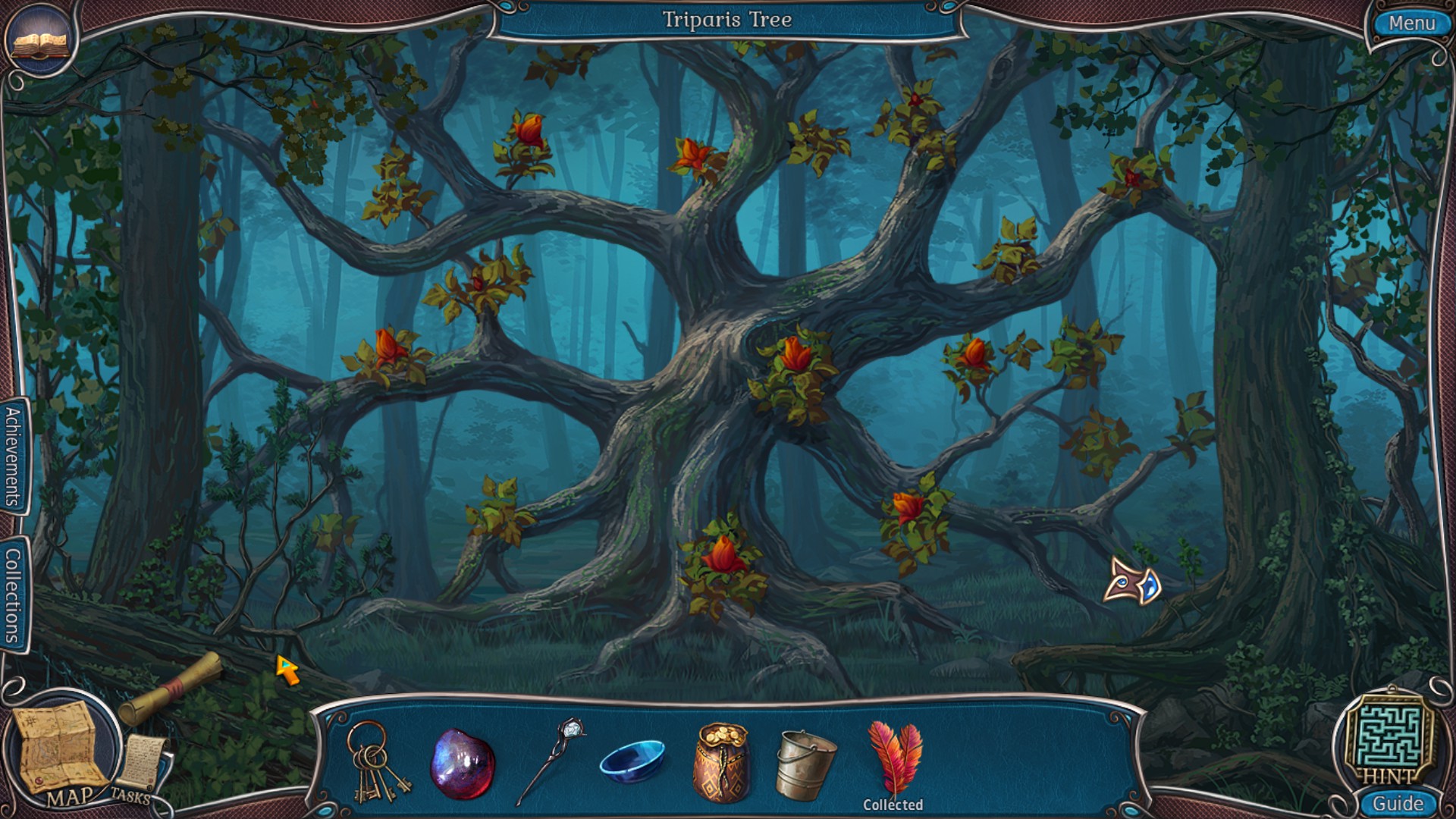 7) Ankemon Abode scroll – On the stone cliff face to the left of the screen (slightly above Cystennin) is a small stone slab. Click on it to uncover a scroll covered in dust. 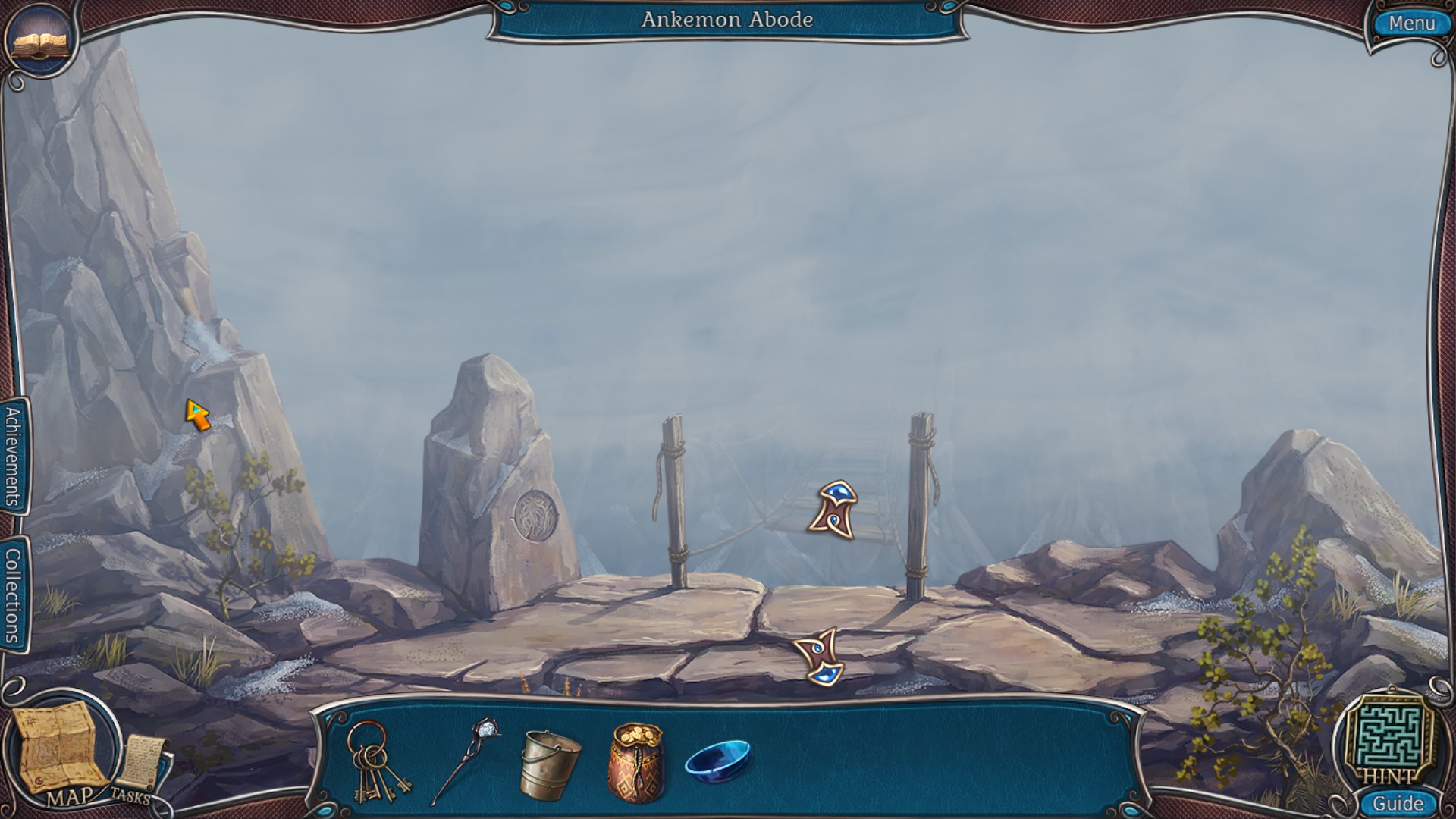 I hope you enjoy the Cave Quest 2 ALL SECRETS (Seeker Achievement) – Cave Quest 2 guide. This is all for now! If you have something to add to this guide or forget to add some information, please let us know via comment! We check each comment manually!