The people that exploited reload system triggered me so hard that I decided to make this guide to show that you don’t have to exploit anything to beat the game on the highest available difficulty (Entropy 5 as of now). I truly believe that anyone can beat Entropy 5 provided a good starting party composition and a good selection of unlocked items. While the Beginners guide by Bonzai101 does a good job at explaining the basics, it is outdated in some aspects, so I’ll try to offer some insight on what’s currenlty good or bad.

The only big difficulty jump comes from diving into Entropy 5, which makes starting composition to be of extreme importance. The first 2 planets are always the hardest ones, and as such I will mostly cover strengths and weaknesses of each character based on their performance from level 1 to level 6. 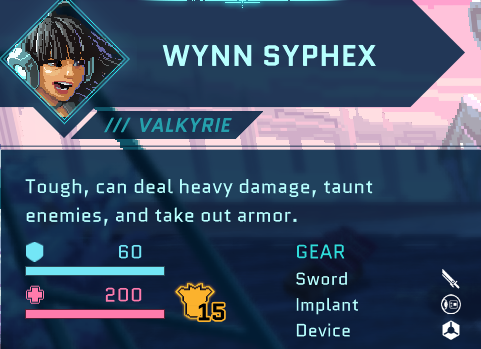 All around decent starting pick.

Starting perks: Berserker for damage or Guardian for tanking 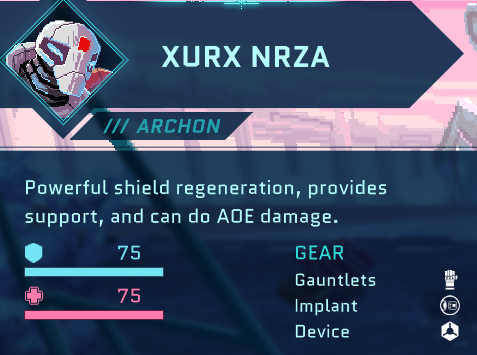 One of the worst characters to start your run with. If you want to end your run on the first planet, this is what you pick.

Starting perks: Zealot is the only viable perk 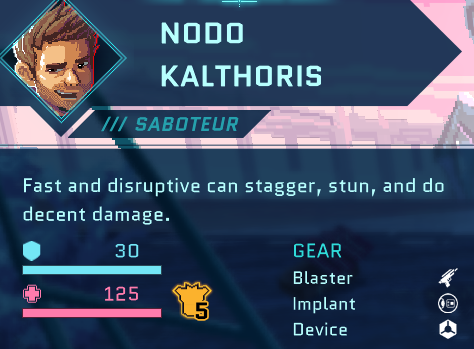 One of the best characters to start with. I recommend using Spectre progeny (Dalen Kalthoris).

Starting perks: Disruptor all the way 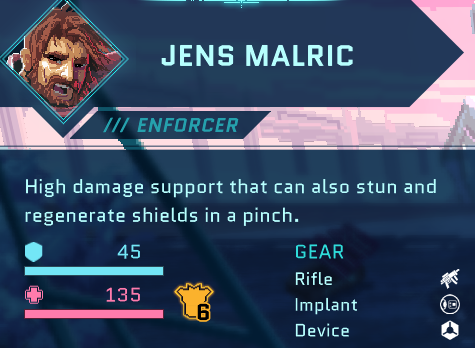 Not the best starting pick. Flurry attack does a lot of damage on paper, but in reality most dangerous enemies are going to have too much armor for the attack to be effective. I recommend using Varangian progeny (Kennex Malric). 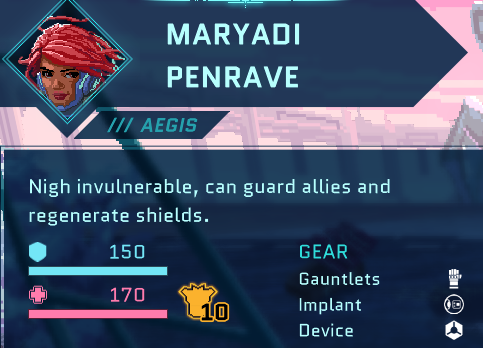 The weakest tank out of 3, she is still great at her primary duty. I don’t recommend leveling her past level 4, unless you have a really good shield device that requires higher level. 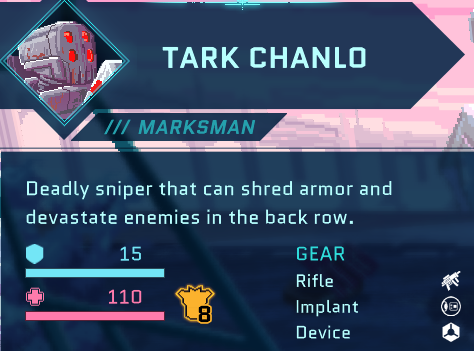 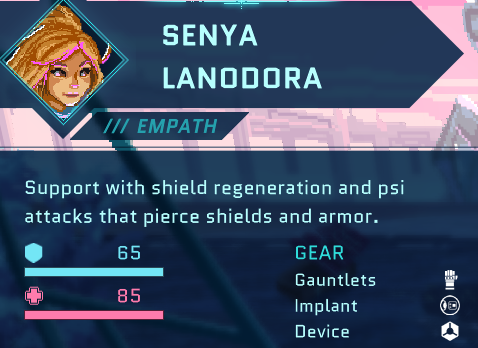 Tied with Archon for the worst starting pick.

Cons: non-existent damage, mediocre support abilities don’t make up for having her instead of an actual carry 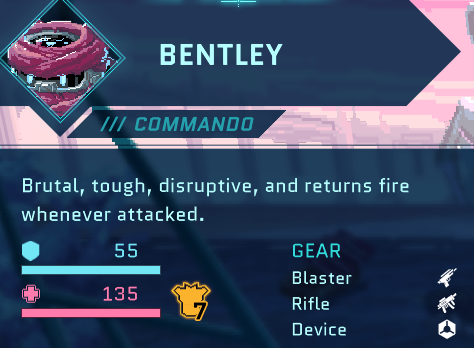 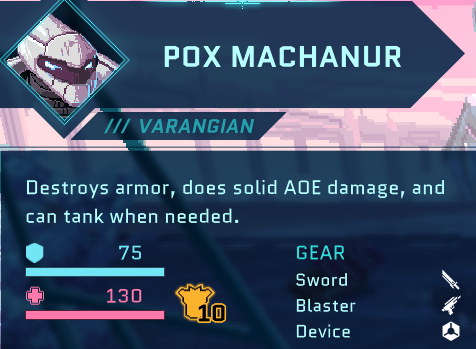 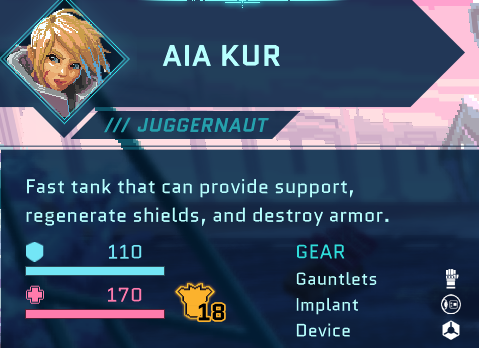 Second best tank in the game. She has a lot of utility, most notably buff removal. Unlike Aegis with her Guard giving only +20% defense, Juggernaut’s taunt ability gives her full +40% defense AND generates shields for everyone.

Starting perks: for some reason Templar only increases shield defense of the leeched target but not hers, so Berserker is best here 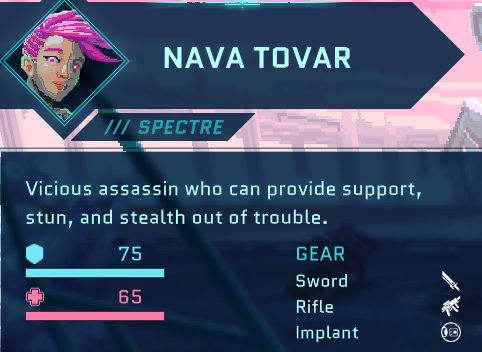 By far the best carry in the game; as squishy as Marksman, but can take heat off herself by going into Stealth, which also makes any of her next attacks instant. 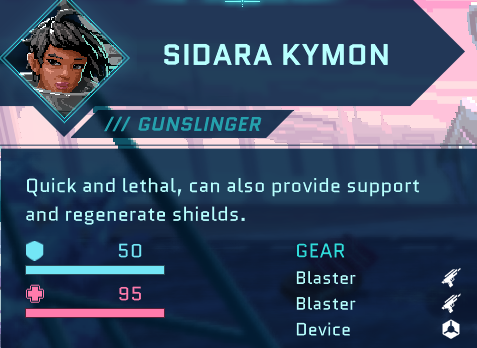 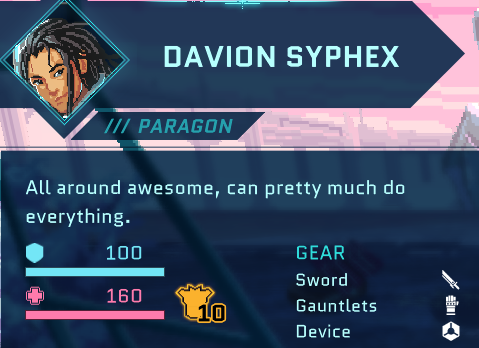 This is everything that Archon wishes to be. His aoe ability scales extremely well with Boneslicer, staggers and steals shields OVER his maximum shield capacity, which allows him to soak damage with the stolen shields, sometimes leaving his own shields untouched. All in all, an excellent off-tank. I recommend using his Saboteur progeny (Brakin Syphex). 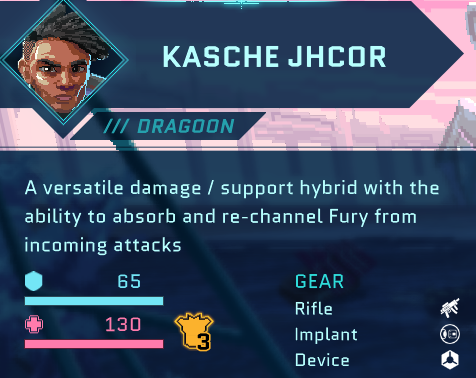 Somewhat weak outside his Supercharge mode, his output highly depends on how well you can manage your fury. 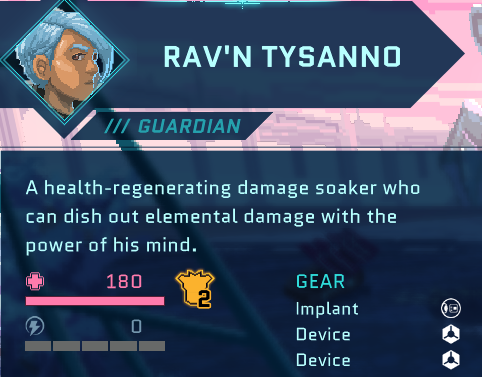 The best character in the game and #1 tank, he is the main reason I beat so many Entropy 5 runs. I highly recommend using Juggernaut progeny (Marv’n Tysanno) and leveling him to level 4 asap.

Starting perks: Reaver to never have any problems with applying elemental debuffs/dots

The way promotion/demotion system works you will want to unlock exactly 24 items (no more, no less) to have 4 promotions to be able to promote 1 device and 3 weapons of your choosing depending on which 3 characters you decide to start with. Unlocking more than 24 items will mess with the item pool and you may get a lot of items in your runs that you don’t want at all. Weapons must have damage multiplier (not the armor or shield damage), or weaken defense, or increased stagger time (not the weaken stagger defense), or faster attack time. Devices and implants don’t have much variety to them and should be self-explanatory.

Cheapest sword, but better than most expensive ones.

By far the best sword, Weaken Defense is one of the best stats to have access to as it is a debuff, which means every party member hits for more. Promote if you start with a sword character.

Yet again, the best gauntlet is also the second cheapest; damage and extra stagger, can’t ask for more. Promote if you start with a gauntlets character.

The variant for characters that don’t focus on dealing damage.

Second cheapest blaster is also one of the best, who would’ve thought.

Weaken Defense AND applies Marked? Yes, please! Promote if you start with a blaster character.

Cheapest and goodest; shield piercing isn’t as valuable, although it means that you can apply any elemental debuff even if the target still has shields intact.

The ultimate heavy hitter for your main carry. 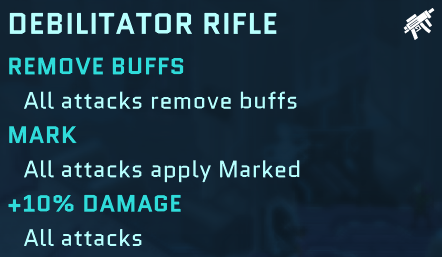 The only item in the game that allows you to remove buffs from enemies practically makes it invaluable and the best rifle overall unless you already have a character with the same ability, which is still not enough to justify dropping this rifle for the other 2. Promote for a rifle character.

For Juggernaut and Aegis. Activate and Promote if you start with one of them.

For your Guardian tank. Activate and promote if you start with him.

If you can’t find your favorite item anywhere in the list above then I consider it to be sub-optimal or straight up detrimental to a successful run. The list contains 16 items meaning that you will have to unlock 8 more items to get 4 promotions so just follow the general guideline in the Items section. Don’t forget that you will also get 4 demotions to spend on the items that you don’t want to see at all, leaving you with 4 more items that you won’t mind finding during your runs.

I hope you enjoy the Character and item guide – Star Renegades guide. This is all for now! If you have something to add to this guide or forget to add some information, please let us know via comment! We check each comment manually!