Here are some crafting tips I hope to make crafting more enjoyable.

The game is in Early Access, so the final release will likely change these tips. Despite our best efforts to keep it updated, the guide may not be up-to-date.


If you already have a save, but need to get some optimized crafters,

(1: Get to town with Adventurer's Guild Substitute Character service

(5: Go to Town with any Adventurer's Guild

(6 – Right click the icon for the new recruit to select "Retrain", which will reset your character's level to 1 and allow to choose the cla*s.

(7 – Goto character profile and select level [+] icon. This will bring back all the levels.

The in-game tutorial explains how Crafting Skills can all be learned at any town that has an Artisan's Guild. The Artisan's Guild can provide training in Woodcutting, Mining, Blacksmithing, Weaponsmithing, Armorsmithing, Magic Equipment Crafting, and Wondrous Item Crafting. This is for a small fee (200 Gold Pieces). Artisan's towns have an icon with the crossed tools over blue banner, shown by their town name. This icon can also be clicked when you visit the town to access the training menu (seen in the bottom right corner when you are inside the town)). It is limited to three characters (1 and 2 a*sistants) that can both craft simultaneously. There is no benefit beyond what you have chosen to be crafters.


The following towns have Artisan's Guilds

The Artisan's Guild icons should not be confused for the Adventurer's Guild icons (cross swords over yellow flag below). These icons provide Disable Device Training, Open Lock training, and/or Substitute characters.

Once you have taught your characters crafting skills you can choose the main and two a*sistant crafters by opening the Skill Menu located at the bottom right of screen (. Next, select the party symbol in the top left (. This icon is often the default).

Scroll down until reaching the section (party crafting skills early game example. This window shows, left to right, Intelligence icon which indicates that this stat provides a bonus modifier for increasing Intelligence, Crafting icons and effective party crafting skill ranks. Last, the character with highest skill level in large box (is not the main miner. The large box shows the five crafting skills with the same main crafter. However the large one shows a different crafting rank than the main crafter of two of the skills. To select which characters will be used to craft, click on the Skill Users Icon at bottom left after you have selected the Party Crafting Skill. The primary crafter (single punch) will be the first, while the a*sistants will be (green fingers shaking).

For a more detailed crafting plan, you can hover over the party crafting skills section. Here is an example with Blacksmithing (. 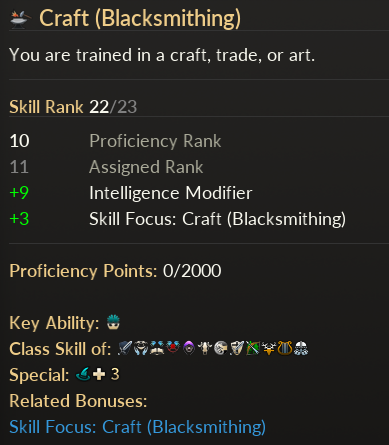 
Bonus for Proficiency Based Crafting Skill

Note: Proficiency increases are permanent, meaning you don't have to reearn them. However, proficiency lost due to skill reset can be used only until the max proficiency is regained.

I recommend using batch crafting as much possible for the below training activities. The bulk of the time can be saved by having enough materials to craft at most 100 items (. Magic equipment, wondrous and other items will take longer. It takes just a few moments and cycles through each of the 100 crafts one at a. The batch feature allows you to go do something for a while, then come back to the game when the crafting is done.

Blacksmithing also features the Volume Production feature that allows for crafting in groups of 10 at a given time with a higher DC requirement. This makes crafting 10x quicker, as discussed below.

If you have completed at least 1-2 cycles with DC 15 Blacksmithing, then you can move onto Stage 3.

Exclusive Blacksmithing Feature: 10x faster (real time). It takes half as long to make items ten per turn instead of one per time. This comes at the cost to increasing DC requirement by 5.

Crafting has many benefits

This is all we can share for Complete Guide to Crafting – Low Magic Age for today. I hope you enjoy the guide! If you have anything to add to this guide or we forget something please let us know via comment! We check each comment! Don’t forget to check SteamClue.com for MORE!