Fights in Tight Spaces can be enjoyed in many ways. This guide explains basic strategy for a “gla*s cannon” style of deck, which concentrates on exploiting continuous high levels of combo. It’s most applicable to Deck Draft Mode, and works well at any difficulty level.


This guide is meant for experienced players. You won’t find much tactical advice here, it is a*sumed that with a suitable build, you can win the fights. A skilled player should be successful pretty consistently using this strategy with The Purist.

The idea behind a continuous combo deck, is to keep all combo requirement cards playable at all times, and maximize the damage of attacks that scale with combo.


Your deck will be composed of roughly 20 cards:

Although it may occasionally be necessary to take a hit, for the most part it can be avoided with a well balanced deck.


For detailed information on cards and enhancements, refer to the in-game Compendium.


* End Combo attacks are marked with a yellow X like this: 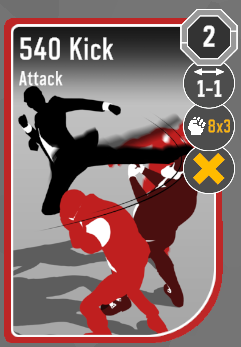 Your first choice in Deck Draft Mode will be which enhancement to take, from a random set of three. This can make a big difference in what type of cards are attractive during the draft.

If none of the top tier enhancements are offered, any of these can be useful:

The remaining enhancements not mentioned, really aren’t useful for this build.

Movement is more important in the early game, where there are reward briefcases to collect for combo and momentum boost. Although it’s totally possible to be successful without any movement cards, they definitely make it easier. During the draft, look to add at least two cards with range 2 movement, even if not top tier. They can be deleted or replaced with something better later on.

The remaining movement cards are less worthy of consideration.

None of these cards are strictly required, but any of the ones in the top tier can be great choices.

The remaining special cards are less suitable for a combo build.

Most of the cards in your deck will be in the Attack category. For this style of build you’ll want to focus on attacks that include movement of you and/or your target. Your deck should typically include:

There is scope for quite a lot of variety in attack choices. Several attacks have a minimum combo requirement, but cost no momentum to play. With continuous combo style, the combo requirement is almost always met.

The throw cards (Throw, Roll Throw, Shoulder Throw, Suplex, and Tackle) are not listed above, they are all great. The latter two are especially useful as they allow throwing an enemy into the void. Some enemies who cannot be pushed, can still be thrown!

The remaining attack cards aren’t as good. However, if you don’t get a Hammerfist in the draft, it may be worth taking a temporary combo finisher.

Here are a few winning decks (The Purist difficulty) which use the strategy described in this guide. 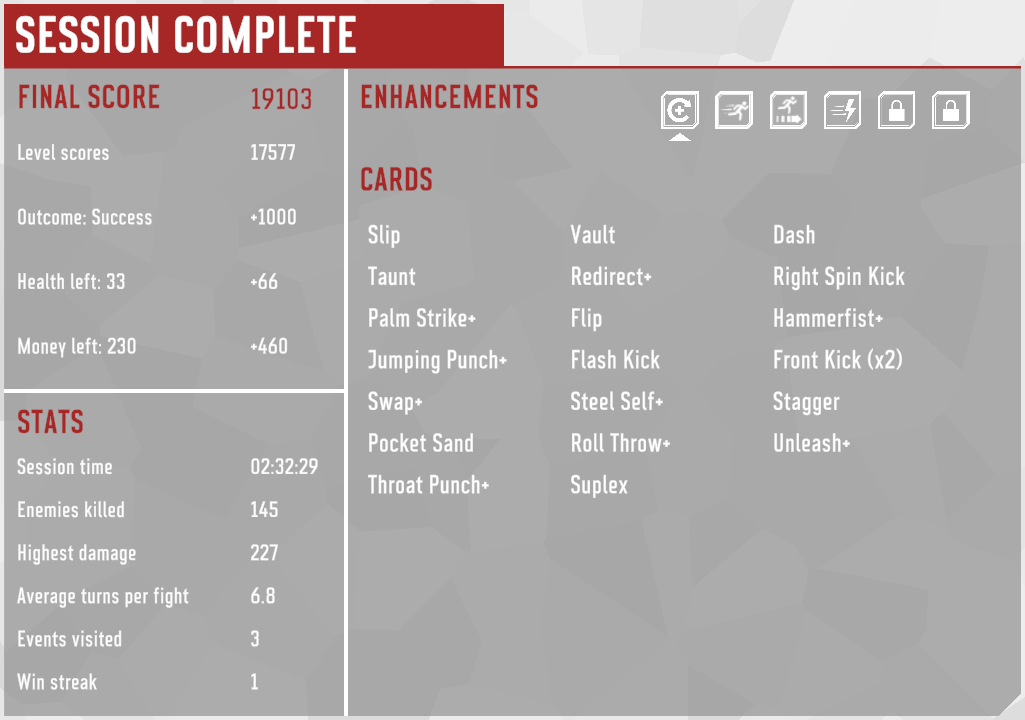 This deck is not optimal, fairly poor luck with the draft and card/enhancement rewards. Several of the cards and most of the enhancements are not “top tier”. However it follows the guide, and it works. 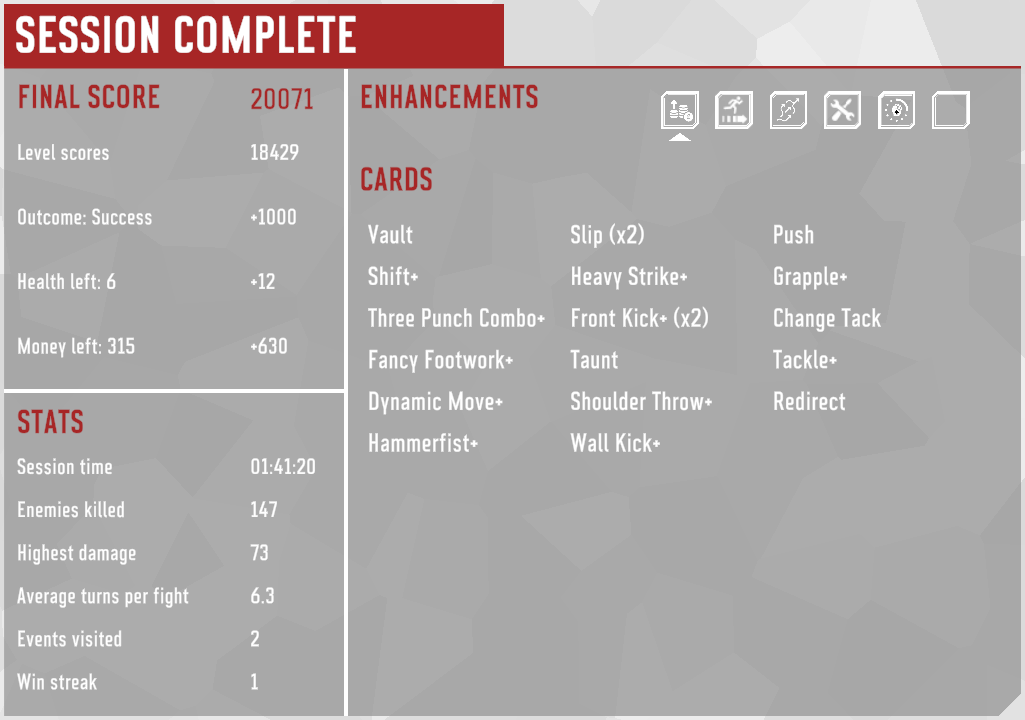 This run went pretty well, except Hammerfist didn’t show up until halfway through the Ninja mission. Most of the deck is top tier cards, and the enhancements are also excellent. 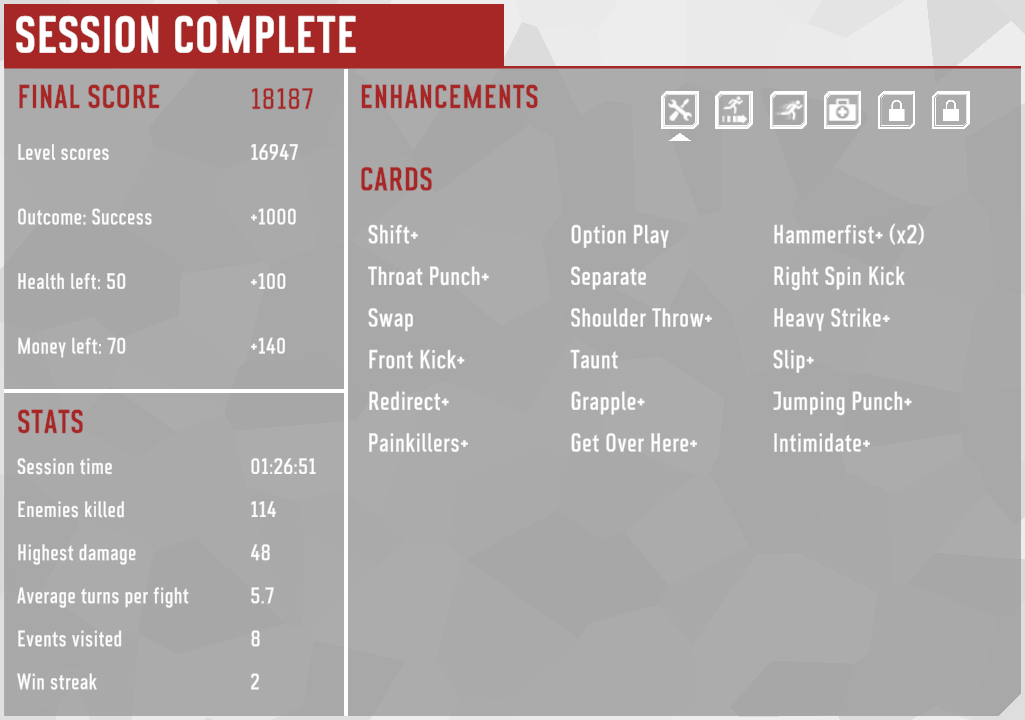 Here’s one where everything went smoothly from the beginning; Apprenticeship is great for a first enhancement. Not a perfect deck, but very strong. By the end it was effortless to just wreck all enemies. 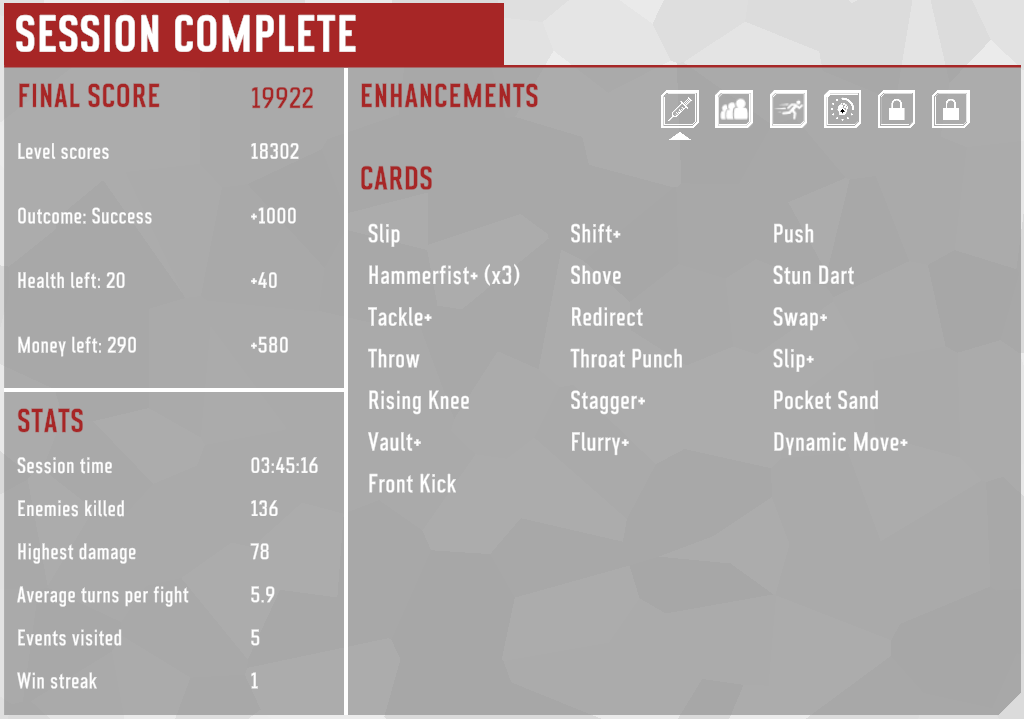 This example started out with Special Serum, which doesn’t give much benefit in the early game. The draft was weak, it was slow going until some of the junk cards were removed, and the first Hammerfist upgraded. But by the ninja mission it was starting to shine.


Max momentum was at 6, and max combo at infinity!

Here we come to an end for the Continuous Combo Style Decks – Fights in Tight Spaces guide. I hope this guide has helped you with your gameplay. If you have something to add to this guide or believe we forgot some information to add, please let us know via comment! We check each comment manually by approving them!