Having made up a basic guide for all the other things in the game I figured a separate ‘guide’ for showing the Creatures would be a bit more organized.

To save on having to type out information constantly I’m making a key up for this one. If there are specific conditions for a Creature then they will be listed as a NOTE under it’s card.

This is what Evidence would point you towards the entity you’re dealing with.

The means by which you dispatch your target once you’ve figured out what you’re dealing with.

What you use to protect yourself or scare away/kill the beastie. Green icons mean the item Defense is useful, black icons mean they are useless. From Left to Right we have:


1) Salt piles – They can flat out keep a creature from entering a room you’re holed up in if it’s a useful defense against it.


2) Ghost Trap – This by itself means that it’s able to be caught in a trap laid down using only Chalk with no need for a carpet.


3) Hidden Trap – This would mean you’d have to use Chalk AND a Carpet to cover it up.


4) Shotgun(Salt munitions) – This icon indicates if you can drive the Creature off using Salt Ammunition in the shotgun.


5) Holy Water – Indicates if you can use Holy Water to get the Creature to stop it’s hunt.


6) Katana – Indicates if you can at least scare the Creature away with a Katana.


7) Knife – Indicates if you can at least scare away the Creature using a Knife. 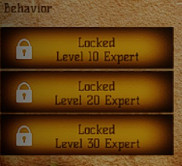 This is the Behavior section of the Creature’s page. These unlock as you gain Expert Status with Dispatching said Creatures. Points gained vary. At levels 10, 20, and 30 you unlock a portion. 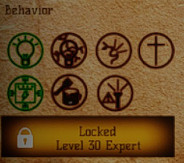 Currently I only have 1 Creature up to level 20+ so I don’t have ALL of the Behaviors to list. Will update this when I hit 30 on something.


The Behaviors are things the Creature are known to do. This can be even more helpful than trying to figure out which evidence you can get. From Top to Bottom and Left to Right.


A2) Breaking Lights – Just as it sounds. The Creature will pop light bulbs.


A3) Screaming – Yes, the Creatures will leave out one hellova scream if they see you. You can’t miss it unless you have the game on mute.


A4) Crucifixes – This indicates if the Creature will invert crucifixes on the map.


B1) Fuse Box – This indicates the Creature will turn off the fuse box on the map. Please remember that too many lights on will trip the Fuse Box as well.


B2) Writing – The tooltip from mousing over is slight blah at the moment but I guess this one indicates of the Creature will write messages on the walls. They are sorta hard to miss.


B3) Flashlight Flicker – This one for if the Flashlight will flicker on and off while a hunt is going on.


C?) Will fill in as I unlock things. 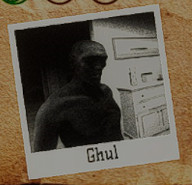 This is a Photo of the Creature if there is one. Some share photos but the model is different. Some don’t exactly have a photo to show. At times THIS could be a great indicator of what you’re fighting. 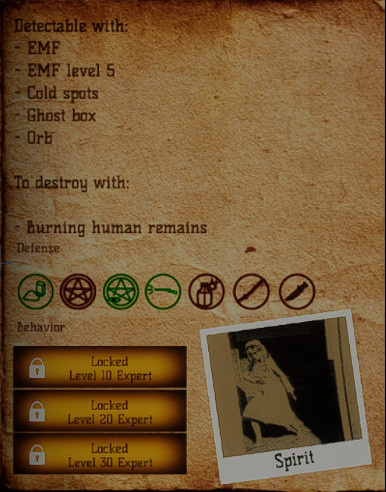 Simple one to fight once you get sufficient enough Evidence. 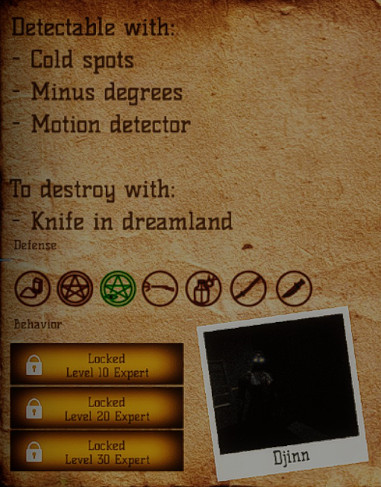 This one you have to let Kidnap you into it’s domain to actually kill it. Probably my favorite looking one. 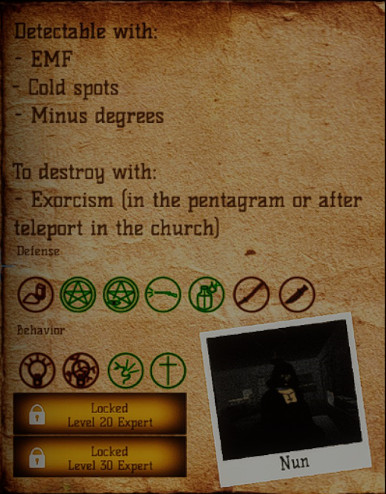 As the Kill area indicates, you have to either catch her in a Hidden Trap and start exorcising OR get Kidnapped and Exorcise in her arena. 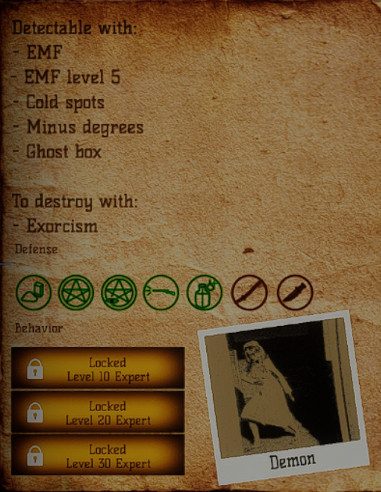 The image for this one is sorta confusing. This one I had a child-like model for it. Exorcising DOES require a Hidden Trap to do. 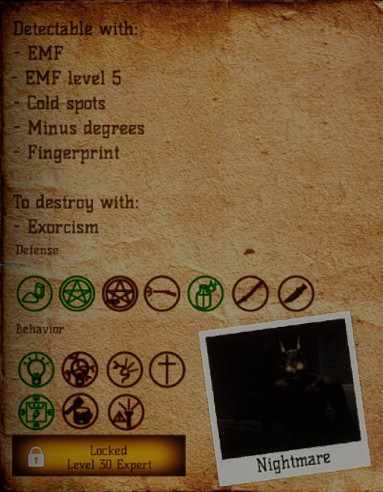 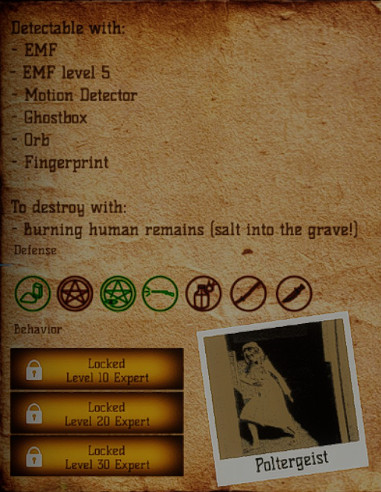 This one can be sorta bothersome to get since it has so many things it’ll be detected by. If you aren’t 100% sure due to thinking you MAYBE missed low/freezing temps then you can sacrifice a Carpet to place a Hidden Trap and be read with a Shotgun with Salt Munitions. Trap pops then ya shoot it and go take care of the body. 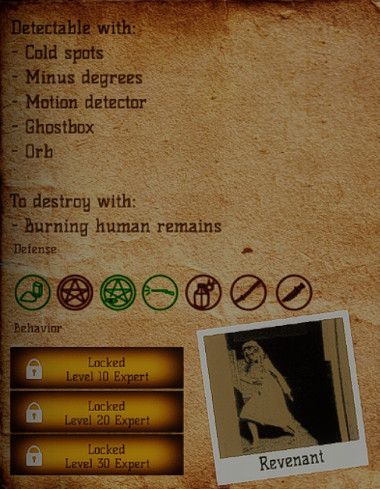 Another one you can lay down a Hidden Trap and pop with a Salty Shotty to try to help figure out what you’re dealing with. Like the Poltergeist only with this one have an EMF Reader around or in hand to see if you get ANY EMF read. If none then ya got this butthead instead of the Poltergeist most likely. 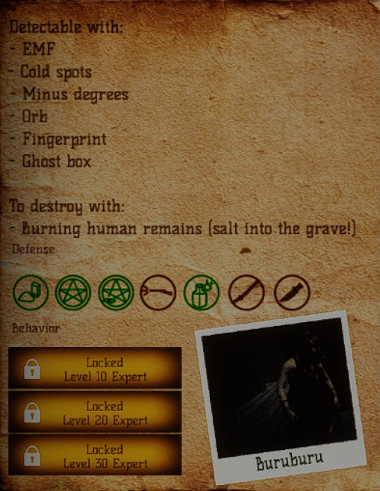 Sorta easy one to figure out as well but due to having a decent bit of Evidence it can have you may wanna double check using defenses. Hidden Trap with some Holy Water gives away this is the one you’re fighting. 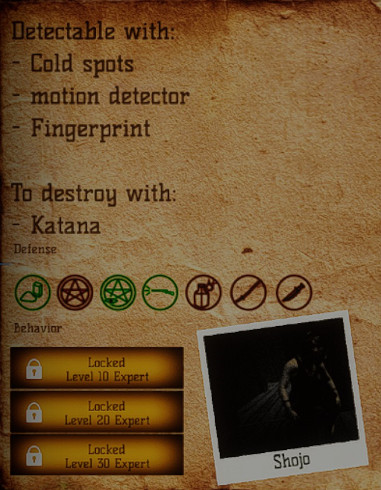 DRUNKEN KATANA BATTLE TIME!! If you get Evidence AND get attacked by an invisible entity you can break out the Sake and the power of animu for this one. 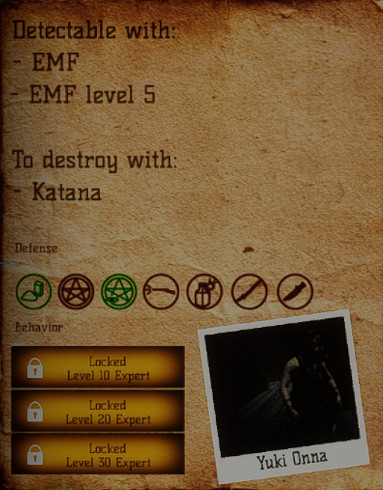 This one is a bit tricky. You’d think that it would pop at least Cold Spots but they don’t as far as I’ve seen. With only EMF it can point to others as well so it boils down to Hidden Trap and a trusty Katana and hoping you’re right. 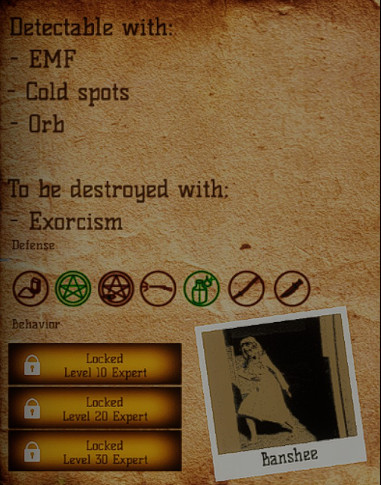 Another where the bit of Evidence can lead to possibly being a few different choices. Ghost Trap and Exorcism Book to make quick work of the issue. Shotty with salt and Holy Water for if it’s not. 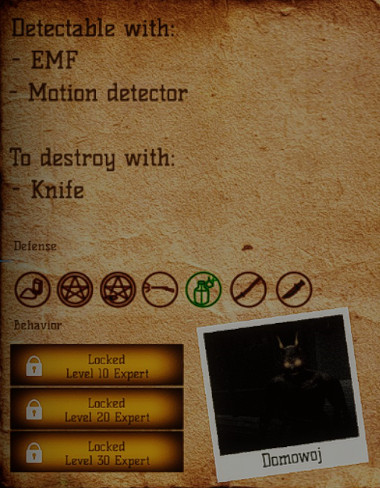 Low Evidence needed BUT can only be seen when you’re Intoxicated and ONLY driven off by Holy Water if you need to defend yourself until you can get a swig of Sake and a Knife. This one can be sorta dangerous. 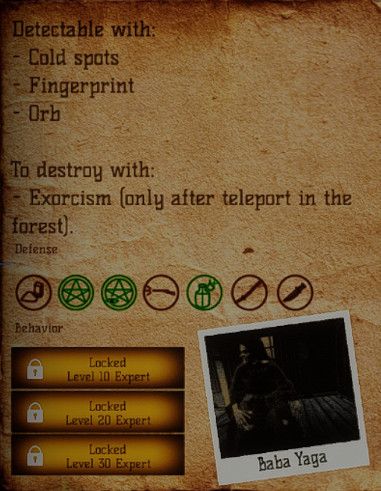 Another with low Evidence count but easily figured out with a Hidden Trap. Biggest pain is doing the Exorcism. You MUST be in her arena while reciting the lines from the book. Often times this is a 2 person job unless you’re A) fast with the reading and B) the voice recognition holds it good. Would recommend taking Holy Water as a ditch effort to escape with your life at least. 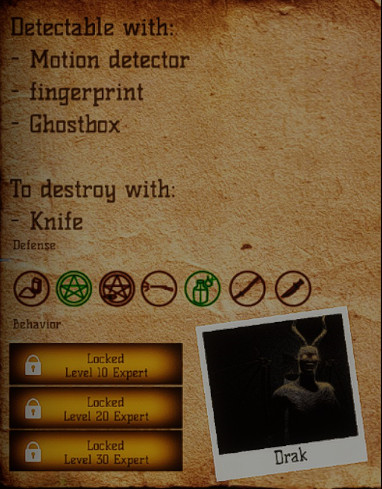 Simple one here though low on Evidence. Only need a Ghost Trap and some Holy Water OR Knife to finish this up. 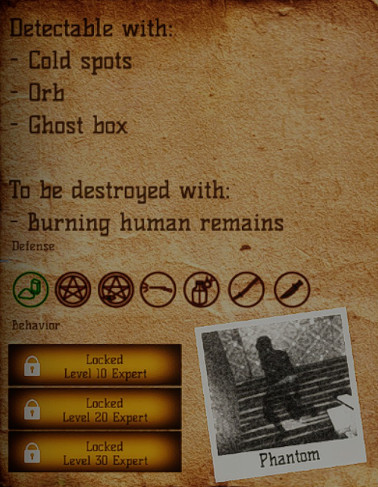 This one… I’ve probably died to this one way more times than I care to admit. If the Evidence stacks up and you’re getting attacked by an invisible entity and the Hidden Trap doesn’t get it then you probably have to flick on your UV LIGHT to even see the silhouette of this Creature. EASILY dispatched though when ya know what ya got. 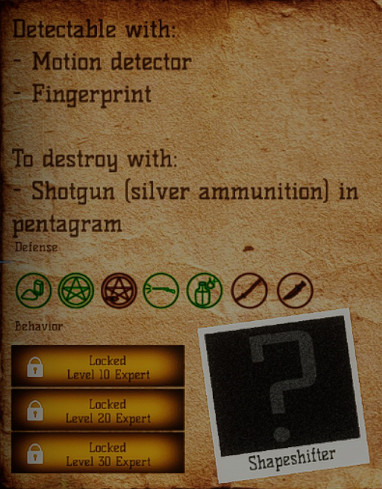 Low Evidence count but when ya get a hunt you’ll KNOW what ya got if you’re playing solo. This one is moreso dangerous when playing with your friends. When your buddy is just slappin’ ya around then you know it’s a Shapeshifter. 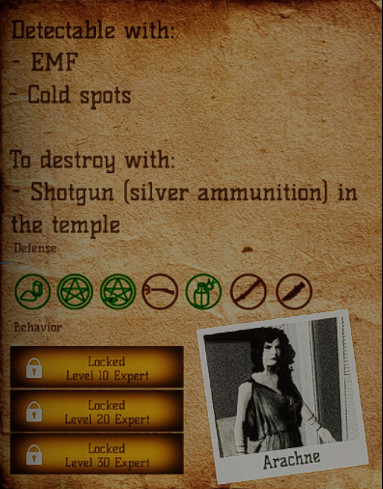 She can be a bit tricky to figure out due to Low Evidences but her model is very particular and when a hunt starts you’ll be stuck in place(due to webs) for a moment. She can also be figured out with a Hidden Trap and some Holy Water to scare her off if you don’t have Silver Munitions in your shotgun. 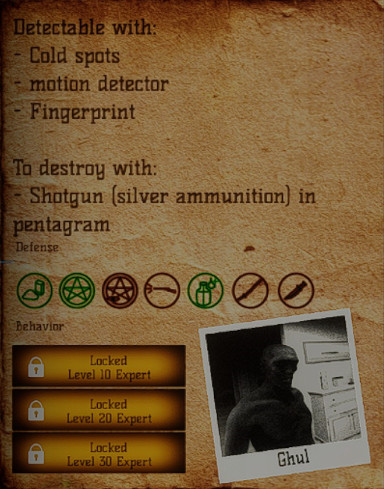 THIS CREATURE ONE-SHOTS YOU NO MATTER WHAT You CAN capture it in a Ghost Trap but only Holy Water chases it away. Particular model to it so it’s easy to figure out from looks. Matter is the kill is difficult when solo. You have to Trap > Shoot > Trap > Shoot. Otherwise you won’t get the second shot off quick enough in closer quarters.

That is that…. until more are added. I intend to update the cards as I get more Expert Status for the Creatures but some are bugged currently and I know the devs are workin’ on them.

I hope you enjoy the Creature Listing – MetaPhysical guide. This is all for now! If you have something to add to this guide or forget to add some information, please let us know via comment! We check each comment manually!