INVASION MODE as the defending side. Tips, Tricks, Strategy, and guerrilla tactics. So you don’t fail (to hard) when defending in Invasion mode.

For those that are new. 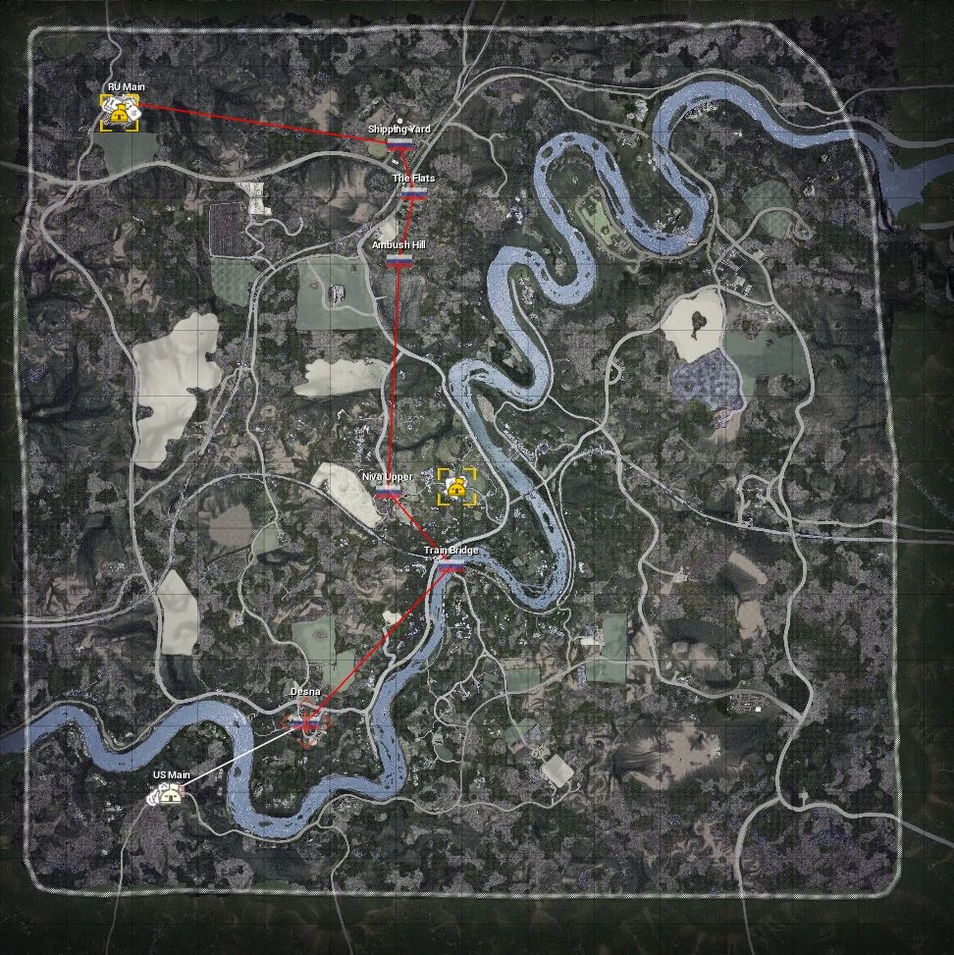 The goal of Invasion is for each team to a*sault and defend.


To win, the a*saulting side must seize all flags and drain all opposing tickets. Because the a*saulting team has less tickets than the defending team, making good use of a*sets and capturing flags is critical to success.


To win, the defensive team must defend their flags and drain the opponent’s tickets.

Defense is the best Offense

Build, build, build, and build some more!!! The essence of this game-mode as defenders is to make it as hard as possible to with-hold the attacking-side.


Every infantry squad should defend the point at all cost, one full squad(9) attacking the attackers is more then enough to disrupt them from any plans they made. Play as a squad, think as a team! Make a battle line and adjust when contact is made! PTFO!!


Support squads, please do what must be done! Support the troops with supplies, building, and/or provide arty-fire. Remember that the sapper/engineer cla*s can build faster then regular cla*ses, they also have an AT mine, C4, and everyone’s favorite the remote IED!


Start building in this order;

Squad-leaders need to keep all squad members in-tone, and near him in order to have the best experience of this game-mode. Otherwise you will be crushed, and scraped-off the map… in no-time!! Trust me, there is no fun in being over-run.


Always stay near the point, keep the rally-points up and provide as much cover for bob the builder as possible, they can give you ammo boxes, cover and greater fire-power!!


Talking about fire-power. Once contact is made, bullets start flying and chaos ensued, try to keep more volume of fire towards the enemy… at all times!! Don’t all fire at once… listen to the first one that fires, count his shots until mid-mag (15ish), then the next opens up, after 15ish shots let the LMG go ham (spray&pray), if the squad has an HMG, both LMG & HMG should fire the same way… LMG burst… HMG burst etc. This provides one to reload under cover-fire, and by doing so keeping eyes on possible movement while reloading (otherwise done in cover).


Always keeping 1 to 3 guns firing should lay down a lot of hate down-range. Who cares if you hit anything, as long as they are pinned down, movement is slow and can be taken advantage of by the single disrupting squad. Just PID you’re targets when creating a wall of fire!

With invasion it is peril to have as much spawn points as possible. Spawn points make or break this mode. But just placing a radio and HAB/FOB so the team can spawn is just not enough. You need to think ahead before placing them.


A few things to consider are;

That said, in the image below you see the wrong & right way of placing HAB/FOB’s. (click to enlarge) 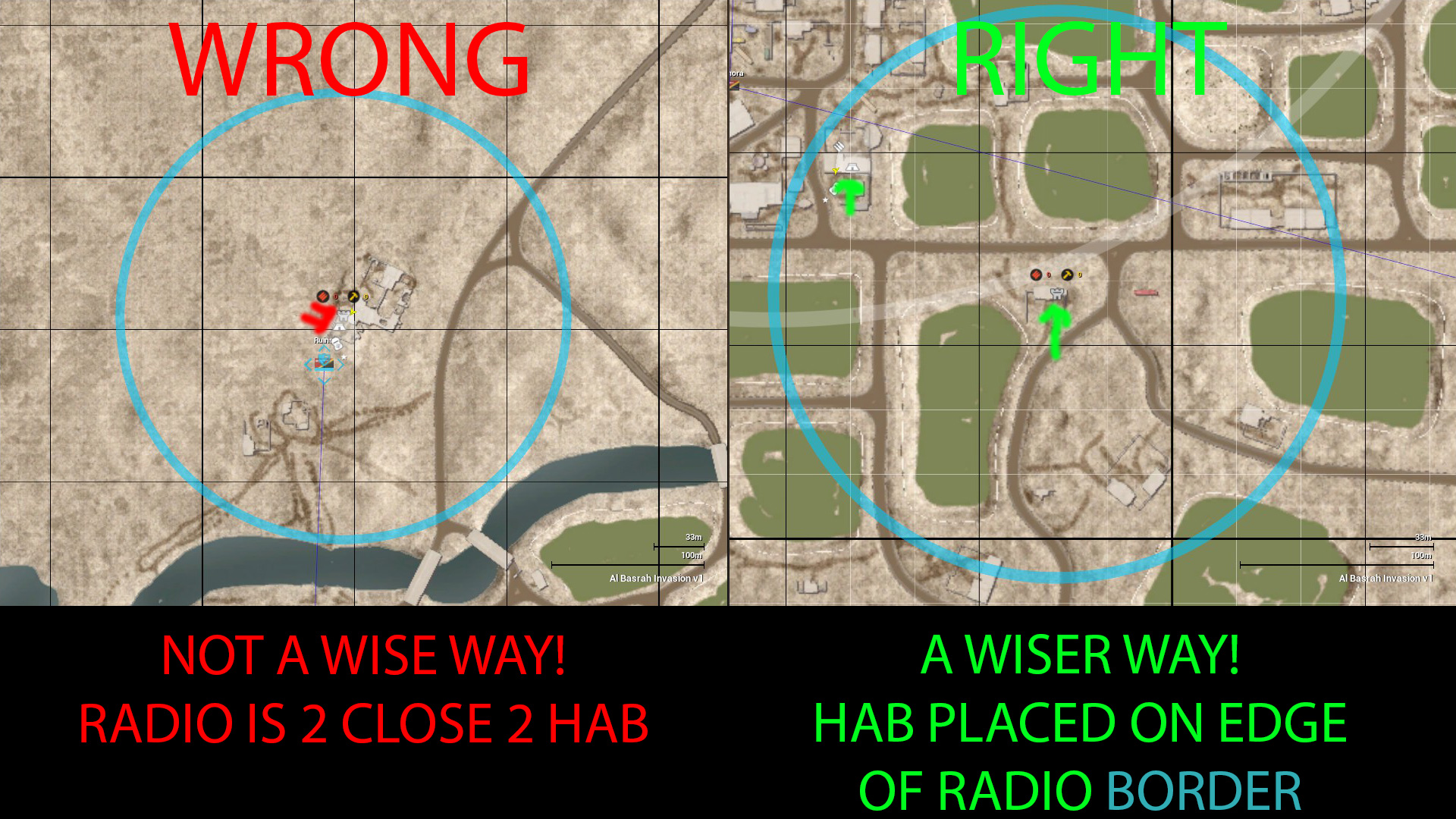 TIP: Place a RP close/near the radio, if enemy is too close, RP disappears and you got some intel that there are enemies near-by!


As said before, spawn points are vital! It is OK to lose a HAB/FOB, it is NOT OK to lose a radio, as they cost (20) tickets. Placing a FOB near a radio is like hitting 2 birds in 1 trow.


Keep in mind, there are always lone-wolfs hunting for radio’s, HAB/FOB’s, and RP’s!


Let me explain this in detail. If the enemy destroys the HAB/FOB you can always rebuild a new one within the border of the radio, if there is enough CP (Construction Points). But if the radio is gone/destroyed, you will not only lose the spawn point, you will also lose every weapon-emplacement and the supplies that has been dropped-off. Not to mention the extra 20 tickets loss of the radio. 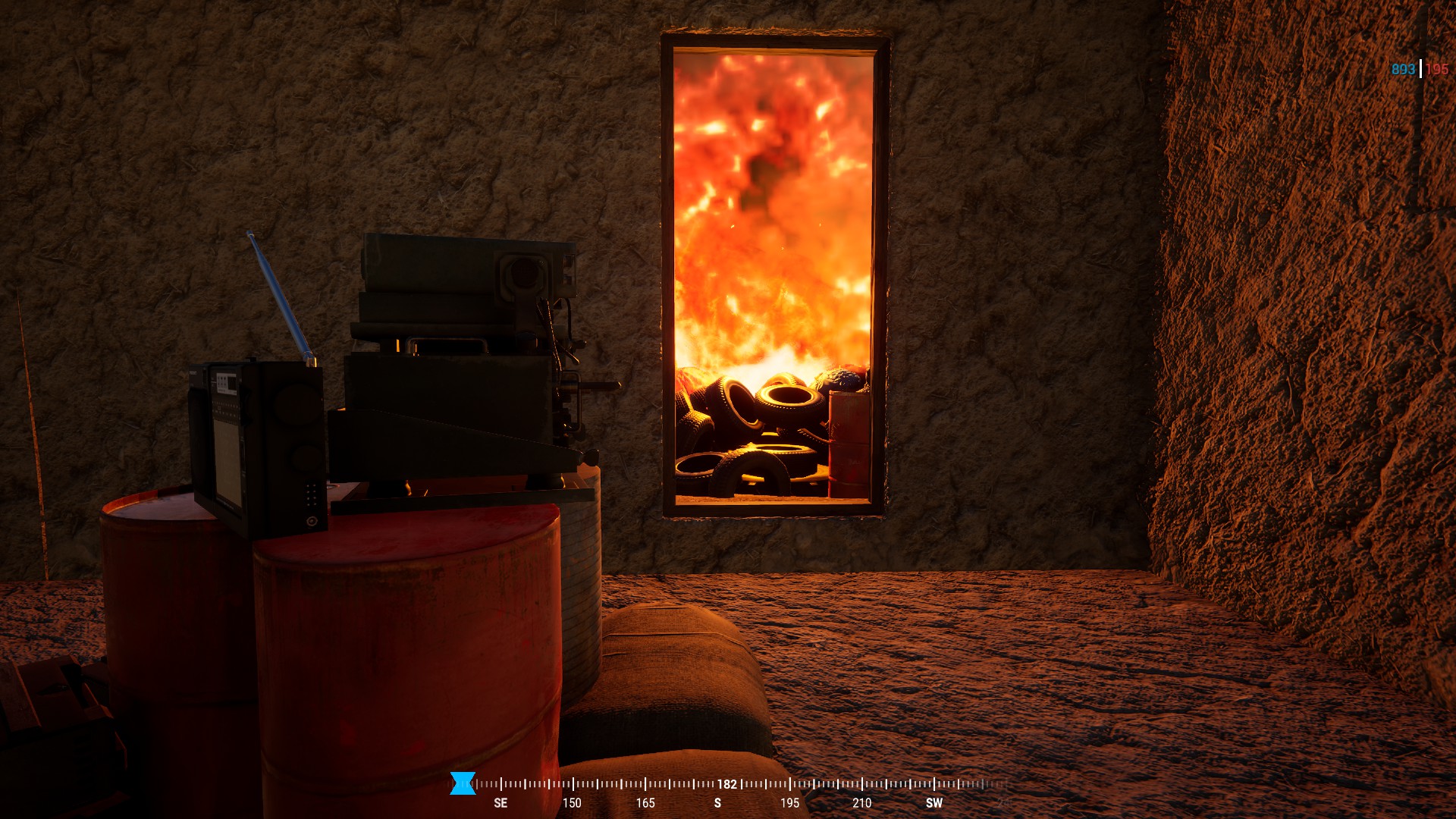 Don’t create too much attention near the radio, create it everywhere!! 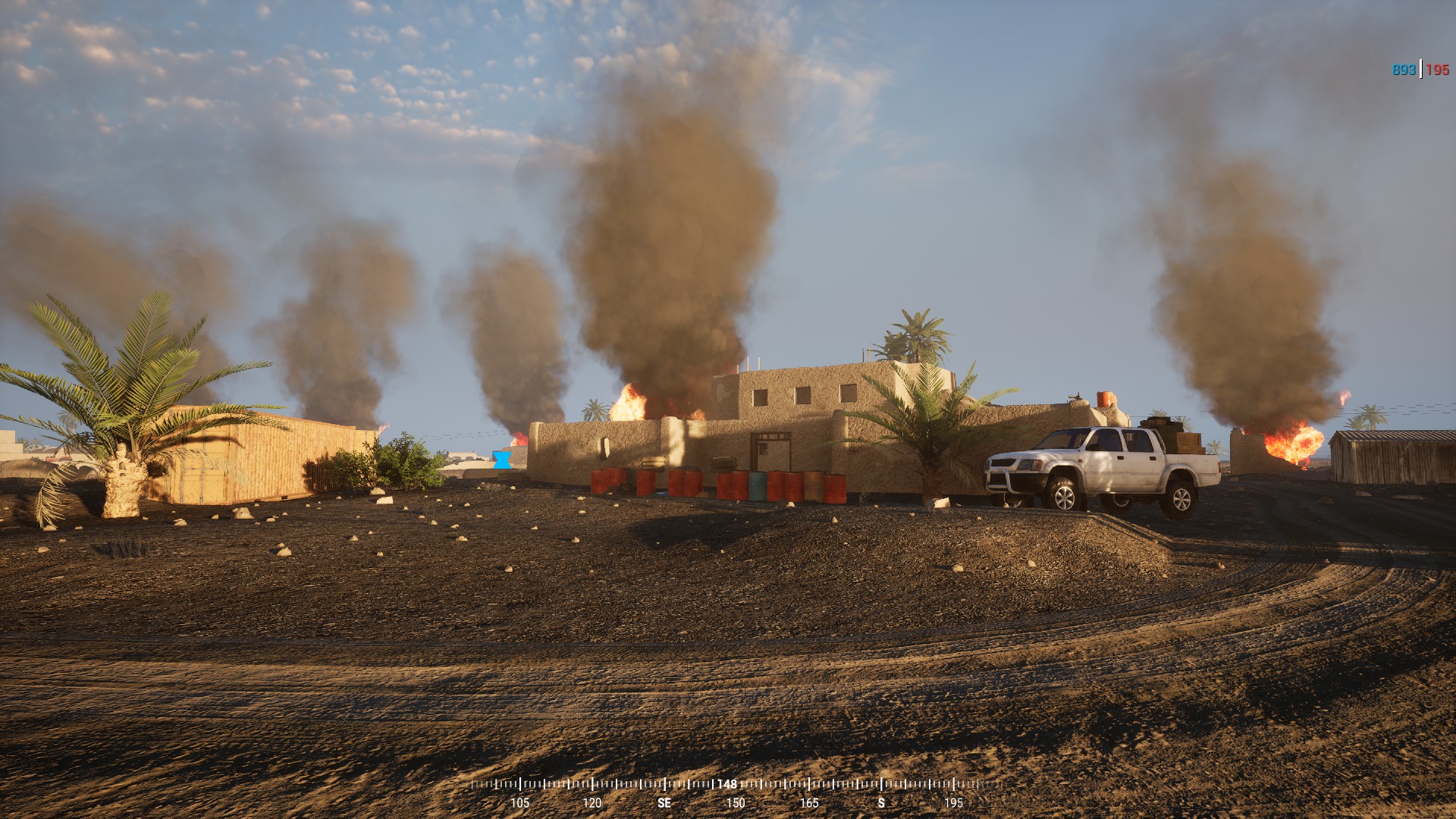 Keep both supplies (AMMO & CP’s) stocked at all times!!


Place the HAB/FOB inside a building!! (if possible) 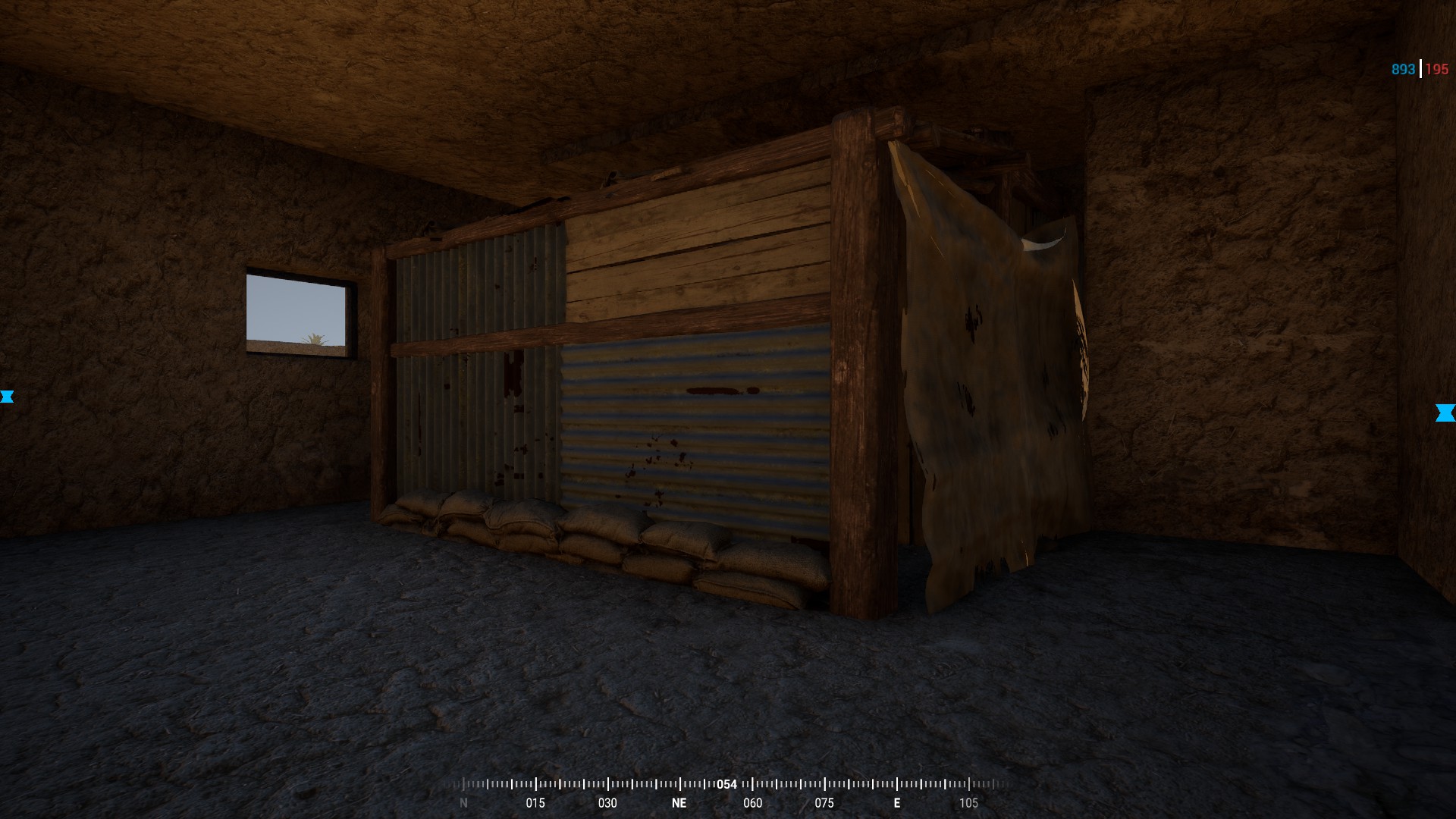 Try to never place the HAB/FOB near the Radio!! 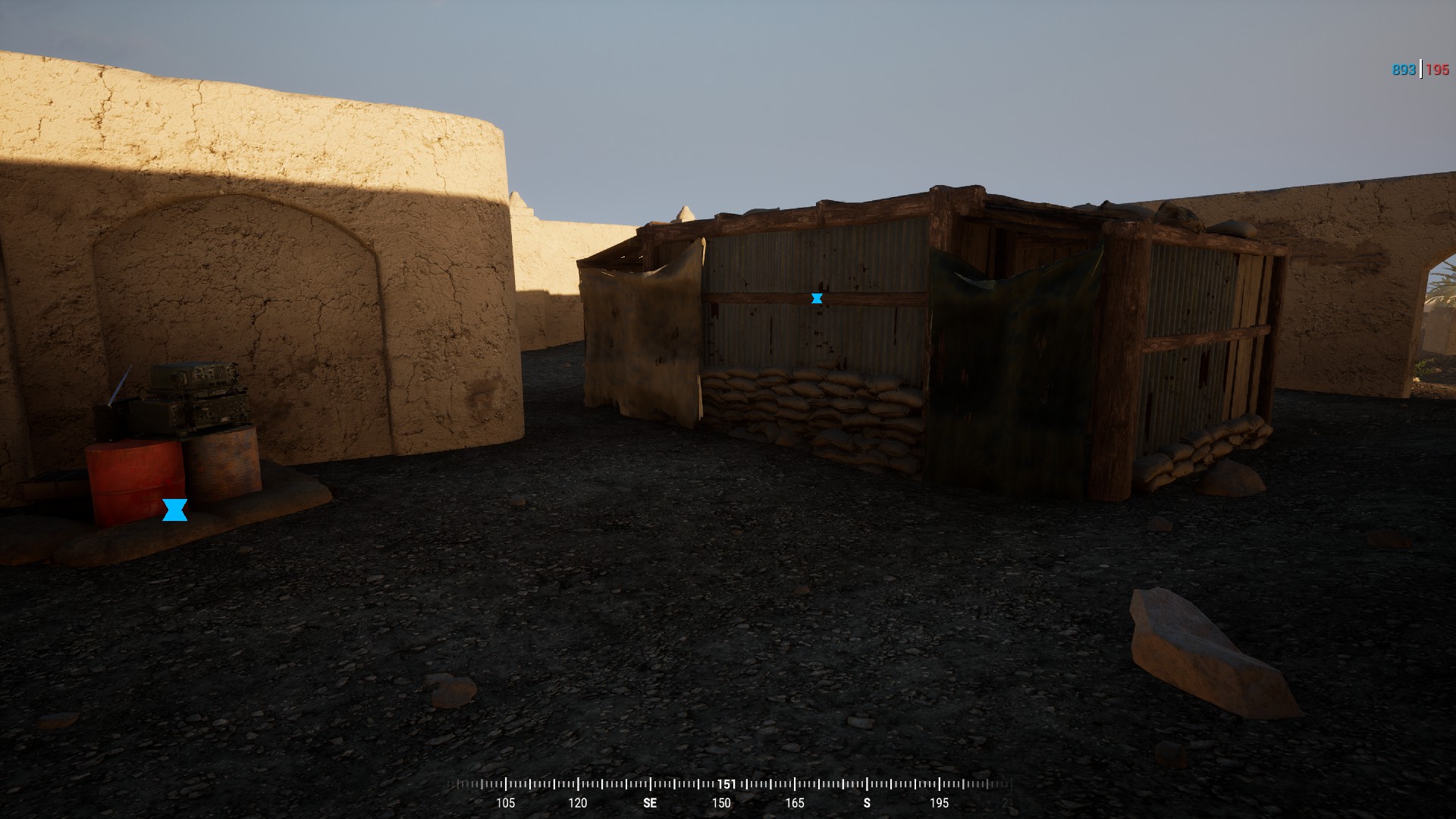 Block the radio sound by placing a repair station very close to the radio!!

When it comes down to building fortifications, eg. sandbags, barrel-lines/HESCO-walls, razor-wires… whatever. Pick spots that a beneficial to both, cover&concealment and fire support.


TIP: Things that are overlooked are most the best a*sets to have.


For example, the newly added burning tire-stack, the indirect-fire shelter, or even the ladder are mostly overlooked.


(As Insurgents) Burning tire-stack is an absolute great a*set. It has 2 things that makes it crucial to place them.

1 – They obscure enemy sight with a thick smoke cloud

2 – When coming to close to the burning stack they(you) will be burned and take damage…. duh.. 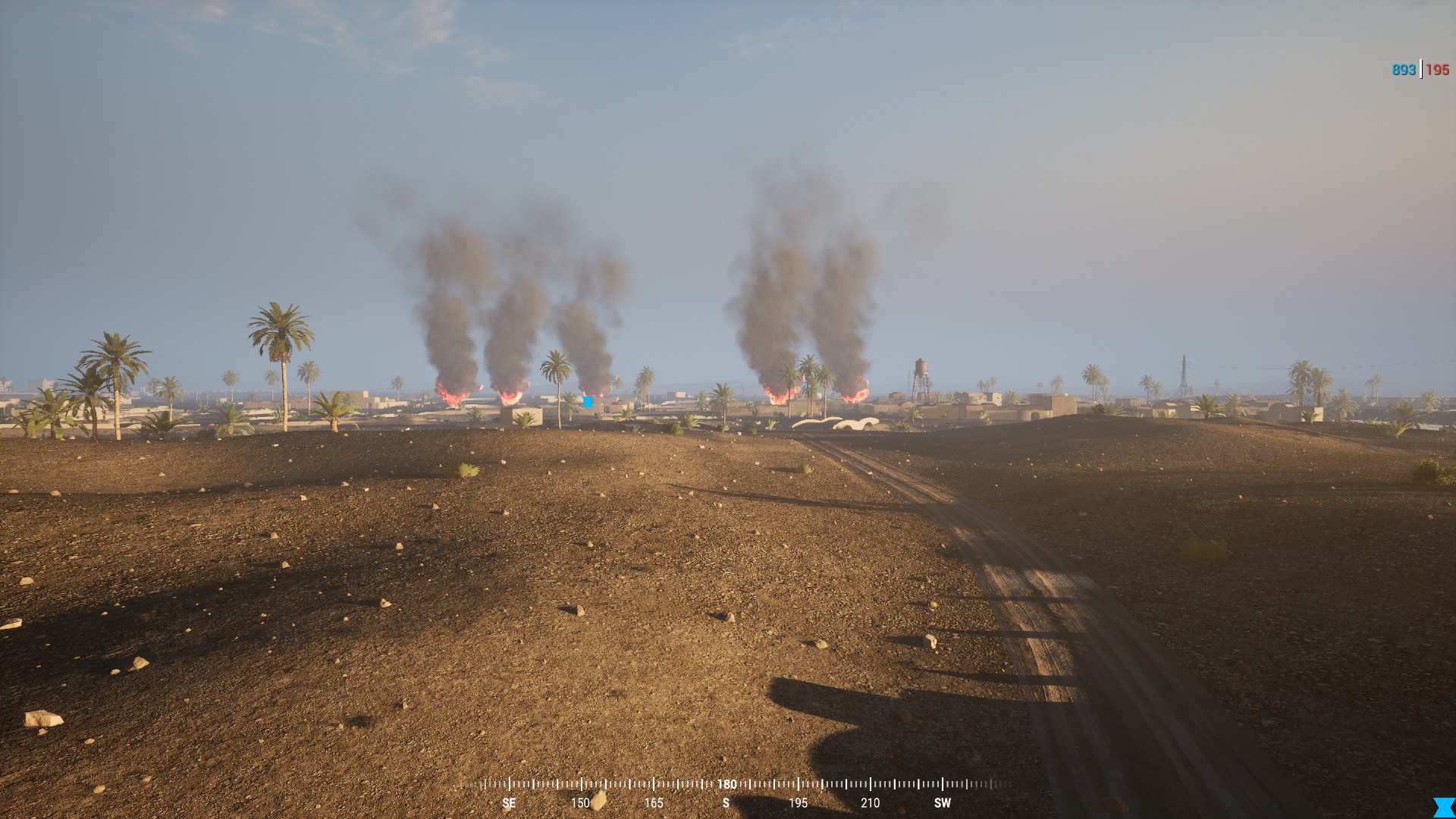 Just keep in mind that they are limited to place (4 max per HAB/FOB).


Indirect-fire shelter is also one of those things that are not widely used by players. When in fact they provide players with good cover during a mortar attack, they can also be used as a covered pa*sage through door-ways, or blocking roads and still having a fire position.


TIP: When using it as a road-block, place it on one half of the road, then place an AT-mine on the other side…


Also, when placing shelters you have to keep an eye on it’s placement. You place it facing the middle part of the structure, meaning exits are on your left & right hand-side <—>


Ladders, useful to get on the roof and place some more weapon-emplacements. Even if you use them to look over a wall is good! So use them!!

Strategy and tactics of guerrilla warfare

The main strategy and tactics of guerrilla warfare tend to involve the use of a small attacking and/or defending, mobile force(s) against a large, unwieldy force.


Squad Invasion is no exception.


“To know your Enemy, you must become your Enemy.”


I can’t emphasis this enough, as defenders you NEED to defend the point, i know some points are harder to defend then others, but still, DEFEND THE *foul word* POINT!!!


Let one full squad including (fast)vehicles do the disrupting work.


I don’t want to write the full definition of the art of defense/defending… way to much typing.


Defend means defend… period!!! Please do so for the love of the game and experience overall for all. A game is first and foremost played for FUN. But when you get you’re *foul word* pushed in and losing cap after cap in quick succession, it is no fun anymore. 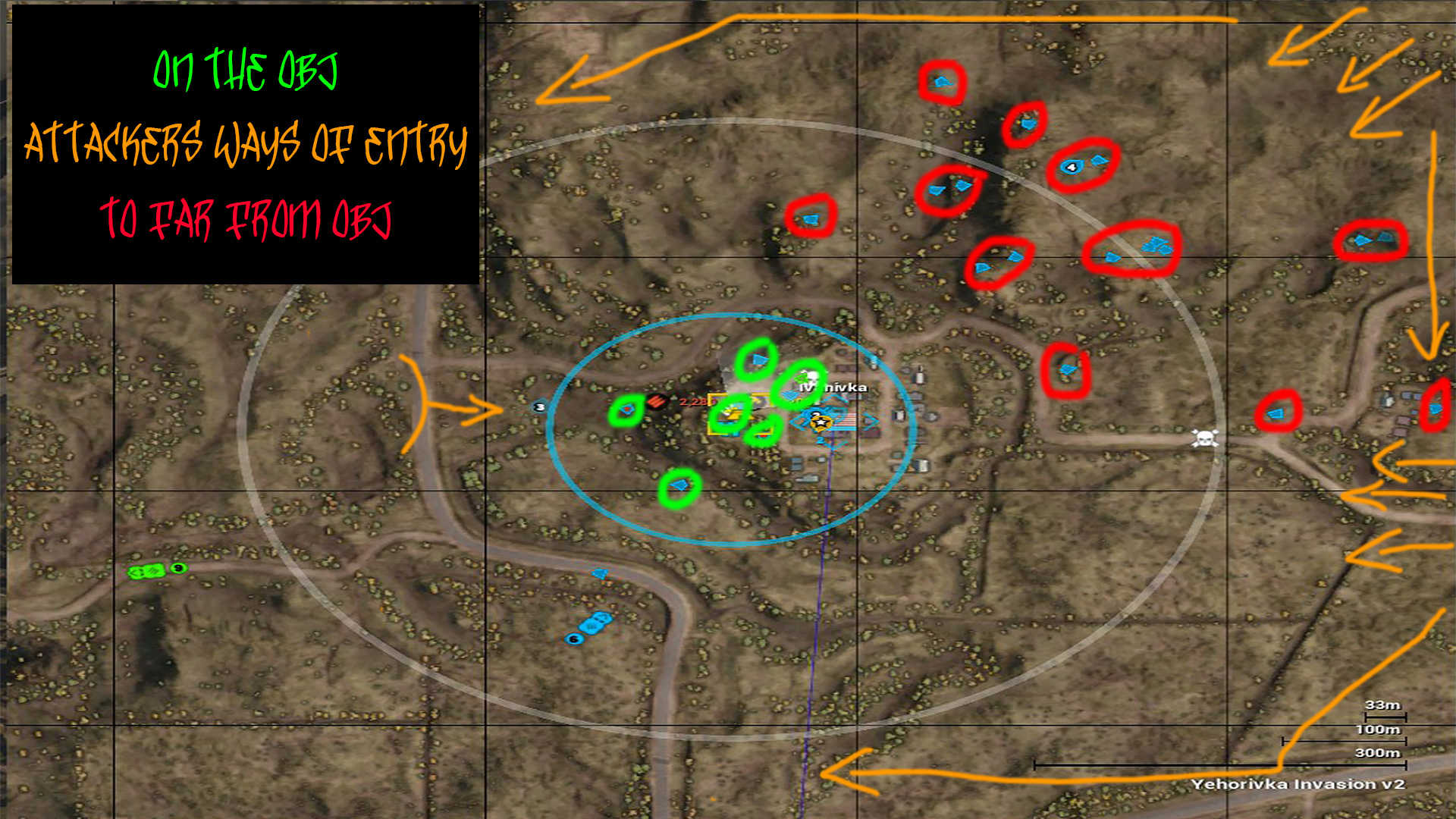 Ok, that *foul word* is out of the way. Let us go over some tactics that can be used when defending.

Are on intelligence, ambush, deception, sabotage, espionage, and low-intensity confrontation. It can be quite successful against an unpopular foreign or local regime, as demonstrated by the Cuban Revolution, Afghanistan War and Vietnam War. 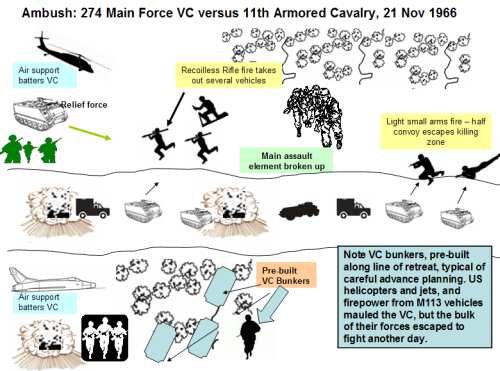 Guerrilla operations typically include a variety of strong surprise attacks on transportation, patrol, and.or supply routes. (keep this in mind!!)

How to guerrilla in-game

“The whole secret lies in confusing the enemy, so that he cannot fathom our real intent.”


And attacking when defending isn’t one of them!!

*Squadleaders must have mics!! Use (keybind B)com’s for what it’s for!! Otherwise go to VR-chat…..


*Make decisions!! “A bad decision is better then no decision at all


*Divide your (full)squad into fire-teams; “Alpha 3x, Bravo 3x, and Charlie 3x”. FTL’s or Fire-Team Leaders can also place down fortifications, and help place markers on the map!!

*Don’t… never forget to place a Rally Point (RP)!! When it is gone, it is a great indicator enemy is near by


*Always have a SAPPER/ENGINEER in your squad!!


*Boot(kick) marksman’s, as they are prone to K/D addiction and tent to go lone-wolf with no benefits!! Everything that goes BOOM or BRRRT!!!

*Build AMMO-boxes!! “You can never have too much ammo”


*Stick with a buddy, or your fire-teammates!! A one man-army is not effective


*Don’t give up so easy when wounded, and give up if you are sure it’s a dead-trap!! Don’t be a selfish prick and leave a wounded bleed out


*Give ammo to RPG-dudes or SAPPERS!!


*Never stay too long stationary(same spot) when you fired your weapon!! A stationary object is a dead object

Check out this awesome guide!! – [steamcommunity.com]


Being on the defense you need to consider the roads that most will take/go is the easy one. Not many players take there time, which should be one of your biggest advantages. Take your time, don’t fire if you are sure you can hit where it hurts most, wait and see what they are doing (if they don’t see you) and relay this to you SL or the CO.


You should pick a fight when you know you gonna win it!!


When playing as the SAPPER/ENGINEER, place an (1)AT-mine on the left or right side of the road and then place a razor-wire on the opposite side, now the path is semi-forced onto your AT-mine. It all depends on the surroundings. Don’t forget to dig them into the ground!!


If you find yourself last-man-standing, and you know you will lose that fight(overrun), pull out a nade(if you have one), go prone, pull the pin and hold it until you get shot by the enemy…. nade will drop and go off…. body-trap!!

Construction on the way!! Gathering intel and breaking the enigma-code….. please stand by!!

To play invasion you need to join a server….


Most servers have invasion in their rotation.

I hope you enjoy the Don’t Fail Defending the Invasion – Squad guide. This is all for now! If you have something to add to this guide or forget to add some information, please let us know via comment! We check each comment manually!