Hello, This guide will help you with everything about Moon Lord.

Who is Moon Lord.

Moon Lord is a Hardmode, post-Lunatic Cultist boss. He is the final boss of the Desktop version, Console version, Mobile version, Nintendo Switch version, and tModLoader versions of Terraria. Picture of him: 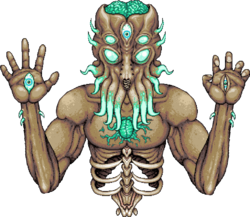 How to spawn him.

In the Solar area:

In the Vortex area:

In the Nebula area:

In the Stardust area:

Moon Lord has two hands and a head that must be killed before his core becomes available for attack. He positions his two hands on either side of the player some distance away.


Each hand, as well as his head, contains a vulnerable eye-like target that is each periodically closed off and opened via an eyelid. These may only be damaged during their “open” states. The core, which is the only part required to be destroyed in order to defeat the boss, only becomes vulnerable when all eye sockets are destroyed.


Moon Lord can teleport to players if all of them get too far out of range.

Moon Lord’s hands move away from the core and their eyes spawn six Phantasmal Spheres. After a couple seconds, they explode, dealing heavy damage. If the player is far enough away, they simultaneously charge at the player before exploding, though they cannot travel at an angle higher than approximately 30 degrees in any direction.

The hand eyes also spawn multiple Phantasmal Eyes, which move in all directions for a short while before homing in on the player. Like the Phantasmal Spheres, they cannot travel at an upward angle, so they can be evaded by swerving upwards. If they cannot get a direct lock and a player is in range then they will attempt to match the target’s trajectory to stay in their path. They explode upon contact with a block or player.

The hand eyes also occasionally fire two Phantasmal Bolts in quick succession, aiming at the player, which pa*s through blocks, requiring swerves to avoid. Another viable option is to quickly drop down before the bolts fire, saving the player from getting hit.

After the Deathray attack, the mouth attempts to attach a Tentacle to the player. The Tentacle can reach through solid blocks. Once attached, it spawns multiple Moon Leech Clots, which are enemies that travel from the player to Moon Lord’s mouth. Any Moon Leech Clot that reaches the mouth without being killed returns 1000 health to one of Moon Lord’s parts (one that has not yet been defeated).

The Tentacle also inflicts the Moon Bite debuff, preventing any life-steal effects from weapons/armor like Vampire Knives or Spectre Armor for 14 seconds (16 seconds in Expert Mode).

The eye spawns Phantasmal Eyes, which behave similarly to when before the eyes were defeated.

The eye charges and fires a lesser Phantasmal Deathray, smaller and dealing significantly less damage. Unlike the primary laser, these attacks cannot go through blocks.


Once the Head eye is defeated, the Tentacle attack becomes more common, with only about a 2 second break between attacks.

When a hand or head target is defeated, it becomes a thorny crevice that deals damage on contact.

Additionally, when a head or hand target is defeated, a True Eye of Cthulhu spawns, which cycles through the following attacks:

The eye fires two Phantasmal Bolts at the player, similar to those from the hand eyes.

The eye spawns six Phantasmal Spheres in a hexagonal formation around itself, which after a few seconds will charge directly at the player, dealing a significant amount of damage to the player. This is by far the dominant source of damage in the second phase and should be avoided by swerving/dashing.

The True Eyes of Cthulhu are invincible and will only despawn if either all players die or Moon Lord is defeated. The eyes remain stationary for most of their attacks.

Moon Lord will teleport to the nearest player if the player he is targeting dies or moves more than 150 tiles away.[2]

The defeat of a pillar is announced in a status message:

“You are overwhelmed with pain…” – second pillar defeated

Celestial creatures do not drop coins, even with the Lucky Coin (or its derivatives) equipped. They also do not drop Presents during Christmas, Goodie Bags during Halloween, or Biome Keys.

In a singleplayer world, the Celestial Pillars will not disappear when the player dies or exits Terraria completely. The pillars must be destroyed in the world, otherwise they will stay in the world indefinitely.

The Moon Lord may not be summoned via the Celestial Sigil while the pillars are still active.

Exiting the world after the “Impending doom approaches…” status message has appeared will cancel the event and prevent the Moon Lord from spawning.

While it is extremely rare, it is possible for a Pirate Invasion or Goblin Army to spawn while the Lunar Events are still active.

Defeat the Moon Lord for the first time.

Slayer of Worlds • “Defeat every boss in Terraria.”

Defeat every boss in the game (not including Empress of Light and Queen Slime).

Dodging Moon Lord’s attacks is crucial. In particular, the Phantasmal Deathray should be avoided at all costs.

Useful items that increase the player’s mobility include Gravitation Potions, fast wings like the Fishron or Empress Wings, items allowing to dash (e.g. the Tabi), the Soaring Insignia, and numerous mount-summoning items like the Gelatinous Pillion, Shrimpy Truffle, Cosmic Car Key, Witch’s Broom, or !!Error: Invalid EICONS input! The Black Spot. The player might also consider constructing a skybridge made out of Asphalt Blocks or Minecart Tracks (especially if using the Mechanical Cart).

Hiding under a row of blocks while using a weapon that can attack through blocks, such as the Solar Eruption, can nullify Moon Lord’s Phantasmal Deathray. Two rows of blocks can be quite effective. The player should make sure that the barrier has horizontal running room, in order to make space to dodge the Phantasmal Spheres.

Using homing weapons or ammo like Chlorophyte Bullets allow the player to focus on dodging.

If neither high mobility nor barriers are available, the Rod of Discord allows the player to easily teleport behind the sweeping motion of the Phantasmal Deathray.

Teleporting away from Moon Lord to get healing from the Nurse might result in her death, because Moon Lord will immediately teleport to the player.

In multiplayer, Moon Lord will attack the nearest player. Players can take turns teleporting home to get healing from the Nurse.

In Journey Mode fighting Moon Lord in a low difficulty, then changing the difficulty during the exploding animation will still give the player the rewards of the new difficulty.

Moon Lord is vulnerable to almost all debuffs, most notably Ichorand Betsy’s Curse, which can dramatically speed up the fight. However, since Moon Lord’s eyes remove all debuffs when they close, the player will have to reapply them accordingly.

It is advisable to kill the eye on the head first. It is the only eye capable of firing the Phantasmal Deathray and remains closed for significantly longer than the eyes in the hands. If the player waits to kill the head last, they may have to deal with two True Eyes of Cthulhu for a longer amount of time.

While the frequently-applied Moon Bite debuff disables the healing effects of Vampire Knives and the Spectre Hood, it does not disable health regeneration boosts, hence the effects of Nebula armor and the Life Drain are not affected.

Some of Moon Lord’s attacks can be avoided using the 200 NPC limit.

Moon Leech Clots will always reach Moon Lord’s mouth in the same amount of time. They travel toward it at a variable rate, remaining completely stationary (or at least apparently so) if Moon Lord is in his default position behind the player. As a result of this, though it may seem counterintuitive, it is actually beneficial to be closer to the mouth to destroy Moon Leech Clots, as they will not move away as quickly.

Moon Lord’s eye sockets still deal contact damage during his death animation. It is wise to move away from the boss after he is defeated.

The entire fight can be trivialised in Expert Mode via the use of the Mechanical Cart. Setting up a minecart track across the sky with bumpers at both end will force Moon Lord to constantly teleport to the player, and allow them to avoid nearly every attack. Using Beetle armor and the Vortex Beater with Chlorophyte Bullets will allow the player to shoot at the reeling Moon Lord, while keeping them relatively safe. 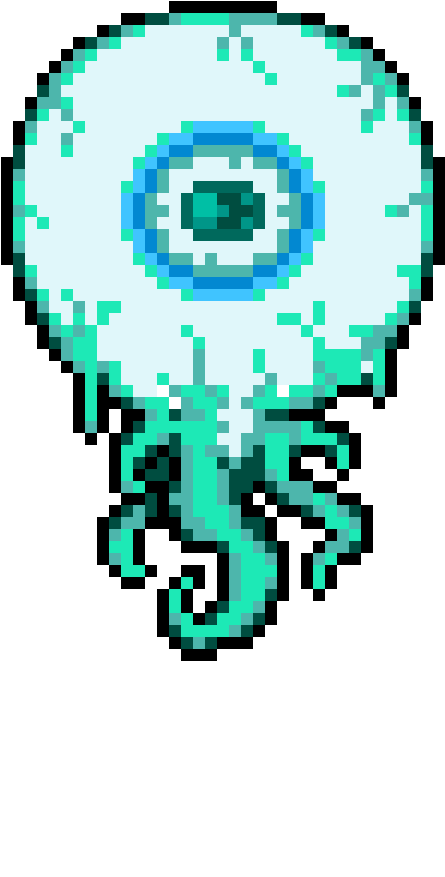 Piece of Moon Squid (Master only)

This is all we can share for Everything about Moon Lord – Terraria for today. I hope you enjoy the guide! If you have anything to add to this guide or we forget something please let us know via comment! We check each comment! Don’t forget to check SteamClue.com for MORE!