This guide is meant to help explain how the escape minigame works and some strategies you should keep in mind to succeed in them.

Over the course of the game, Seles and friends will get tied up by a wide variety of foes via story sequences. While the game is usually a game over when you have everyone subdued, some areas also have you simply tied up again with another escape attempt, and you can do this forever with no penalty, which is actually helpful as it refreshes party health and magic.


Sometimes being caught is beneficial, especially if you’re trying to take something from a bandit camp for a side quest (though later areas can soft lock you with a guard outside a cell before you get back any of your party, just turn down to easy if needed). You can also gain bonuses via leveling up your escape skills by making successful escapes. You can also grind out these levels at camp a ways into the game (where you can also view level perks and your current gained).


The time ticks down with every action you pick, plus during struggles. When you struggle, you select a single binding to focus on and press the arrow keys as they appear on screen to weaken the binding. Empty the bar and the binding is removed. You have a variety of actions to give you information and assist you in your escape attempt as well.


Ties can also have a distraction rope placed that will raise a distraction bar whenever you move in a particular way. This will weaken your struggle attempts. Undoing certain bindings can sometimes remove this. Otherwise, you can lower the bar by focusing on blindfolds, gags, or interacting with the guard, though this costs time. Consider what the more time efficient option in the situation is. 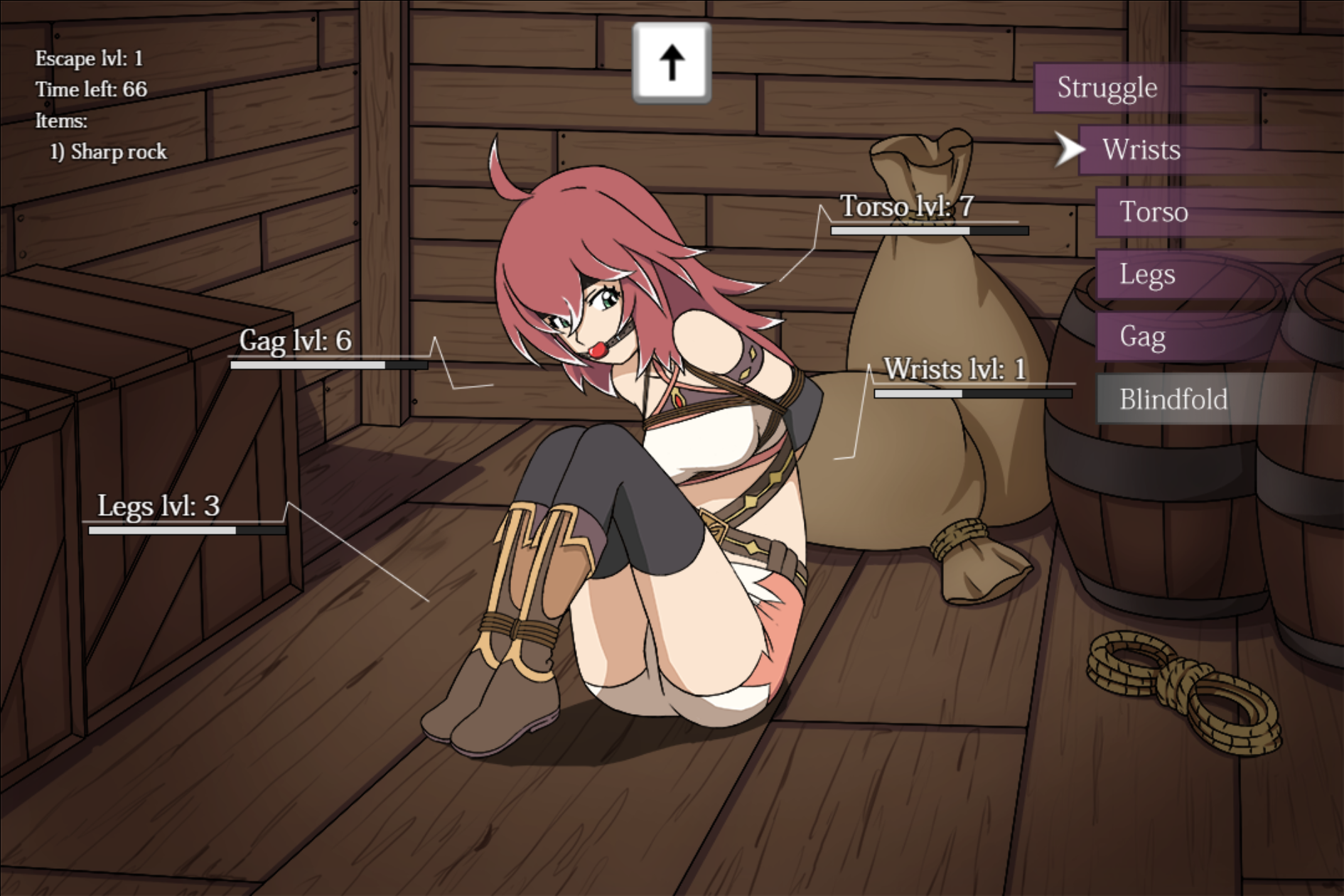 Fairly easy to get out of, and you can move around via hopping from start. There may be a distraction in place that will irritate Seles when you move your legs. This also applies to the torso. 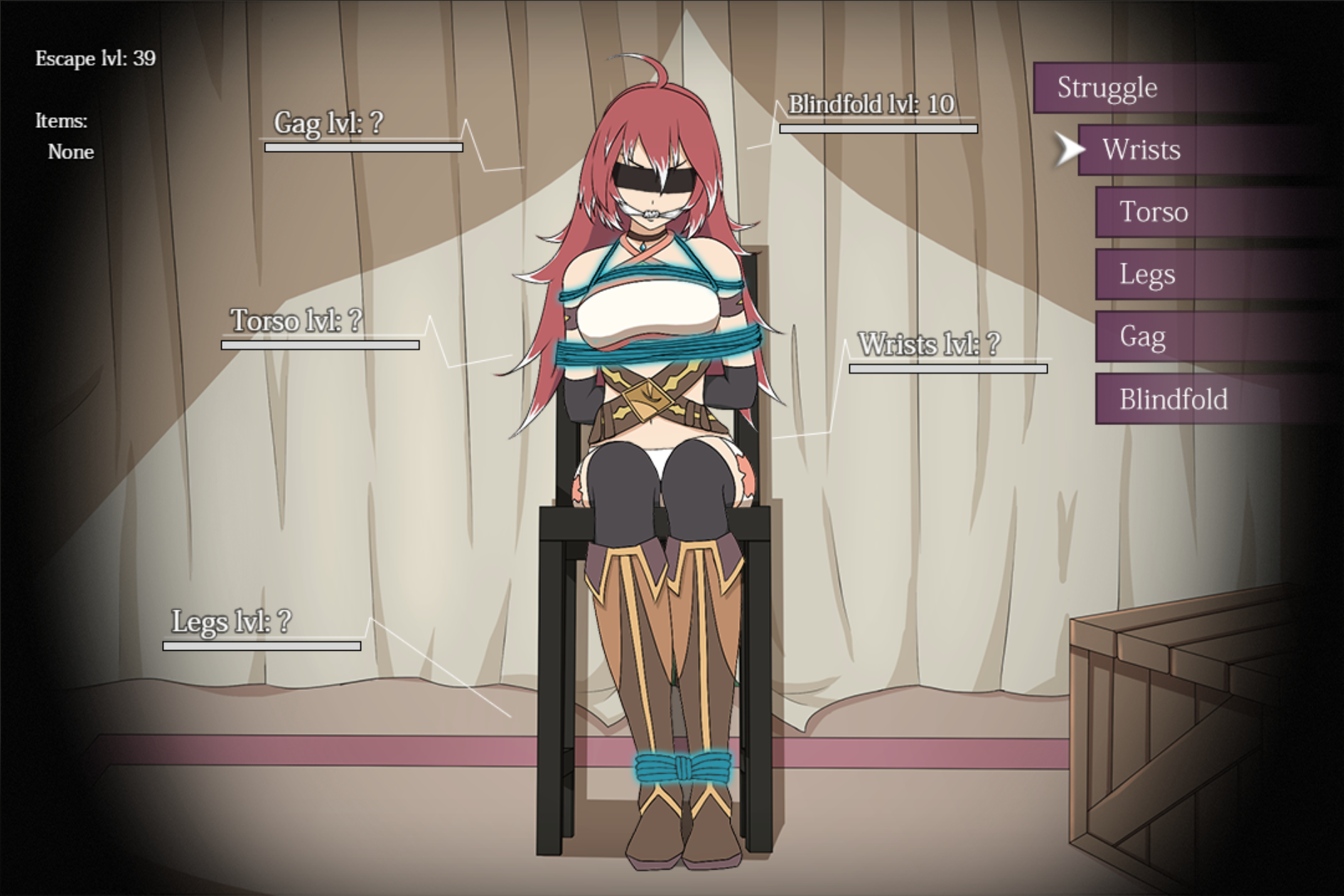 Similar to the basic tie, except you’re tied to a chair at start. To move around, you’ll have to undo the torso bindings. Otherwise, it’s the same sort of game. 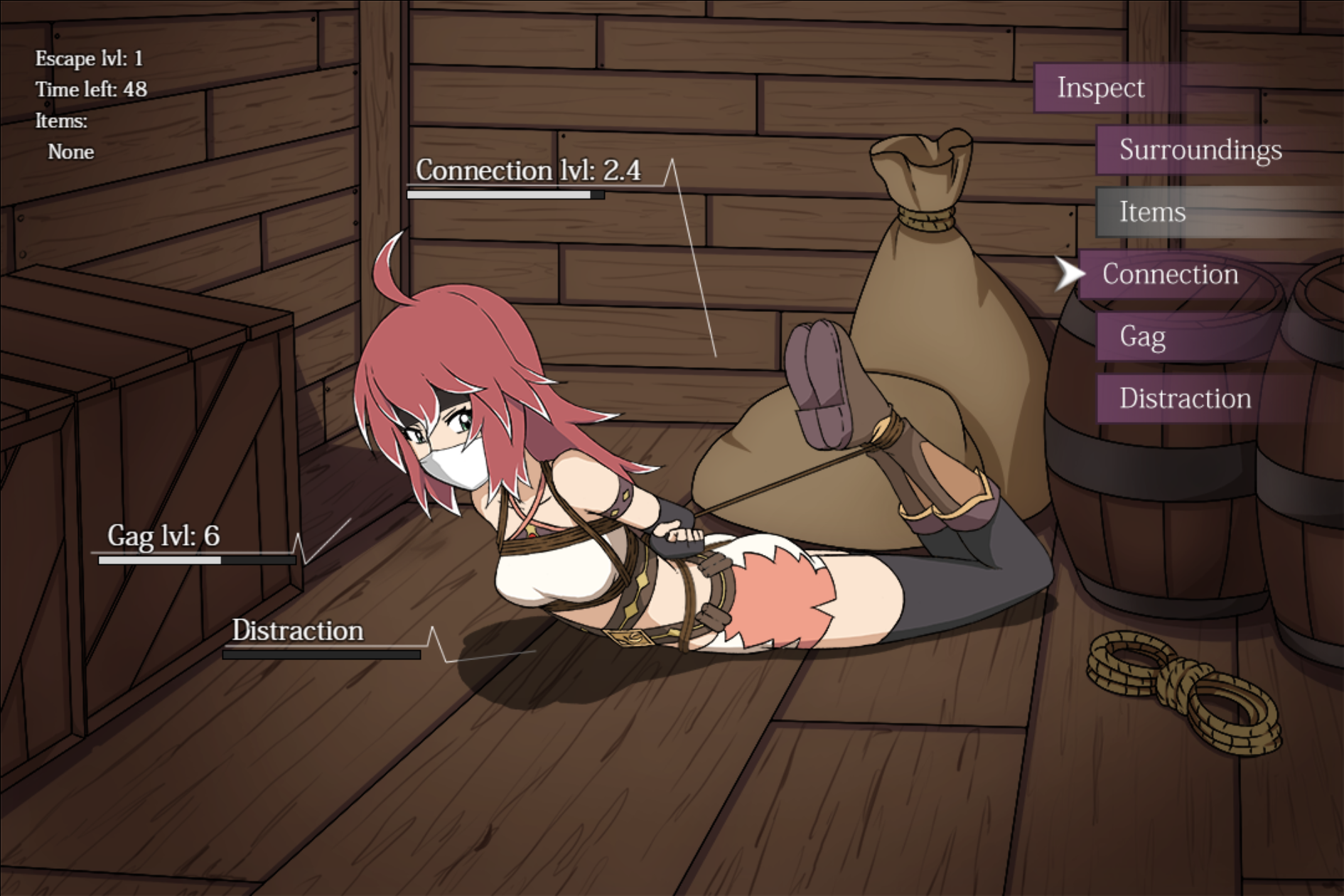 A tie you have to undo to enter a basic tie. You only have to worry about a connection binding, plus any possible blindfolds or gags. A distraction may be used, so just focus on your gags, blindfold, or interacting with the guard to lower that meter.


Later in the game, some guards will tie Seles up this way while also tying them to the ceiling, and undoing that tie will make her land to the ground in a thud and possibly alert the guard. This is unavoidable. You will be left in a regular hog tie. 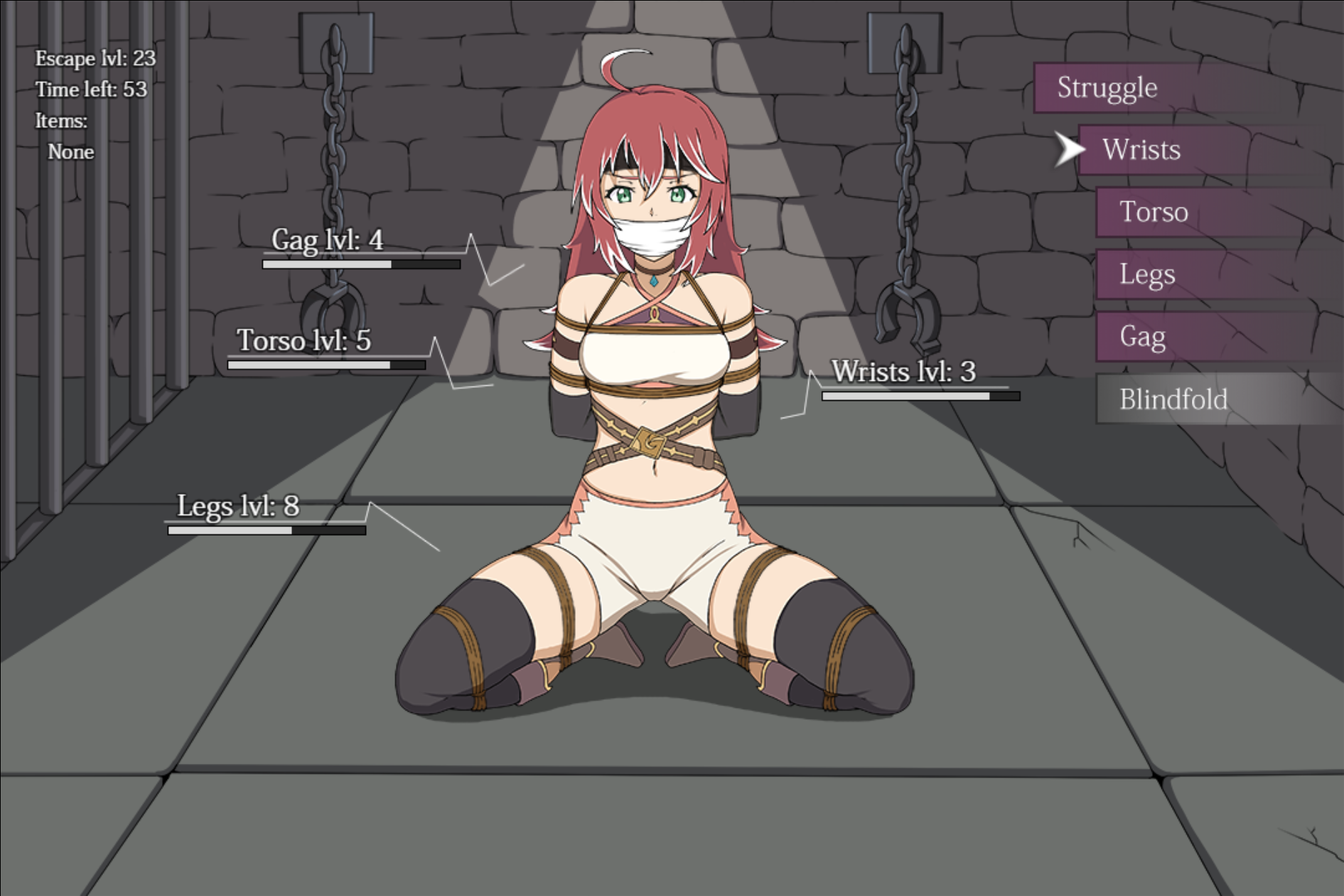 The hardest tie of the bunch. Frog ties completely restrict your legs, so you have to undo them to have any hope of moving. Normal variables apply otherwise, including a possible distraction.


The other major complication is that many points in the story leave Seles in this tie while tied to a pole, which you can only escape from by undoing your wrists, thus winning the minigame. This means when a pole is involved, don’t bother trying to use items from around the area or attack the guard.

Blindfolds will restrict your sight, removing the ability to inspect unless removed. Gags will make Seles quieter and difficult to understand. There is only one type of blindfold, but several gags. Each gag gets increasingly more difficult to remove, though it’s unclear if any of them make you increasingly harder to hear.


In order, gags are cleave, knotted cleave, OTM (over the mouth), OTN (over the nose), and ball.

As the game goes on, anti-chomatic ropes and gags will be introduced. They are more difficult to struggle out of then normal ropes or gags. The AC gag also cannot be removed by Seles, meaning you will remain difficult to understand the entire escape attempt. You can spot them by their blue glow.


The one upside to the AC gag is that you can struggle with it all you like, a safer way to lower distraction then risk a guard making your bindings stronger. Very useful for frog ties, especially when tied to a poll.

Choose a binding and press the arrow keys as they appear on screen to weaken the binding. A distraction will lower your struggle effectiveness as the distraction bar goes up, usually done by trying to undo legs or torso bindings, or connection and suspension bindings in a hog tie.


If you manage to get an item, said item will improve your struggle effectiveness. Useful for tough bindings.

When not blindfolded, Seles can give information on binding strength and their function in the tie, look around your surroundings to see if any items are present (will be marked with question marks), or see if you have any allies around.

Seles can call a guard or an ally. This is more effective if you are not gagged.


Threatening a guard will have the opposite effect, but can open them up to be assaulted if you’re feeling adventurous. Mainly a tactic for roleplaying rather than an effective method of escape.


Pleading for help will often make a guard ignore you or tighten or add to your bindings, unless you lower their strictness enough. If you manage that, they may loosen your bindings.


Assault will have you attack the guard if you have enough bindings undone. This can possibly net you an item they have on them.


You can also assess a guard to learn their tying skills, strictness, how closely they’ll observe you (ie see if you loosened or undid any bindings), and if they have any items on them.


For allies, you can ask them to loosen your bindings. There’s an option to try and help them, but so far, this option is useless as you’re almost always too restrained. You can rescue them after finishing the minigame.


Worth nothing that guards will react to you differently if you talk while gagged, sometimes to your benefit in rare cases.

Seles will move around the area. If blindfolded, she’ll possibly drop items you pick up, and sometimes move in the wrong direction. If her legs are still in bind, she’ll hop, using up more time. You can interact with allies, pick up objects you found via inspecting your surroundings, or can pick them up blind (which is very unlikely).

Seles will give up and you can watch a game over sequence. The game is filled with failed escape game overs with unique dialog.

You’ll get a hidden amount of escape experience after every escape, the amount going up with the difficulty of the escape. The highest level escapes can usually guarantee a level gain. As of 1.0.3, there are perks up to level 65, a new one unlocking every five perks.


There are a set of late game challenges that offer extra rewards at the chroma lab, and these perks can be success or failure on them.


The perks are as follows:

No better teacher than doing some wriggling yourself! 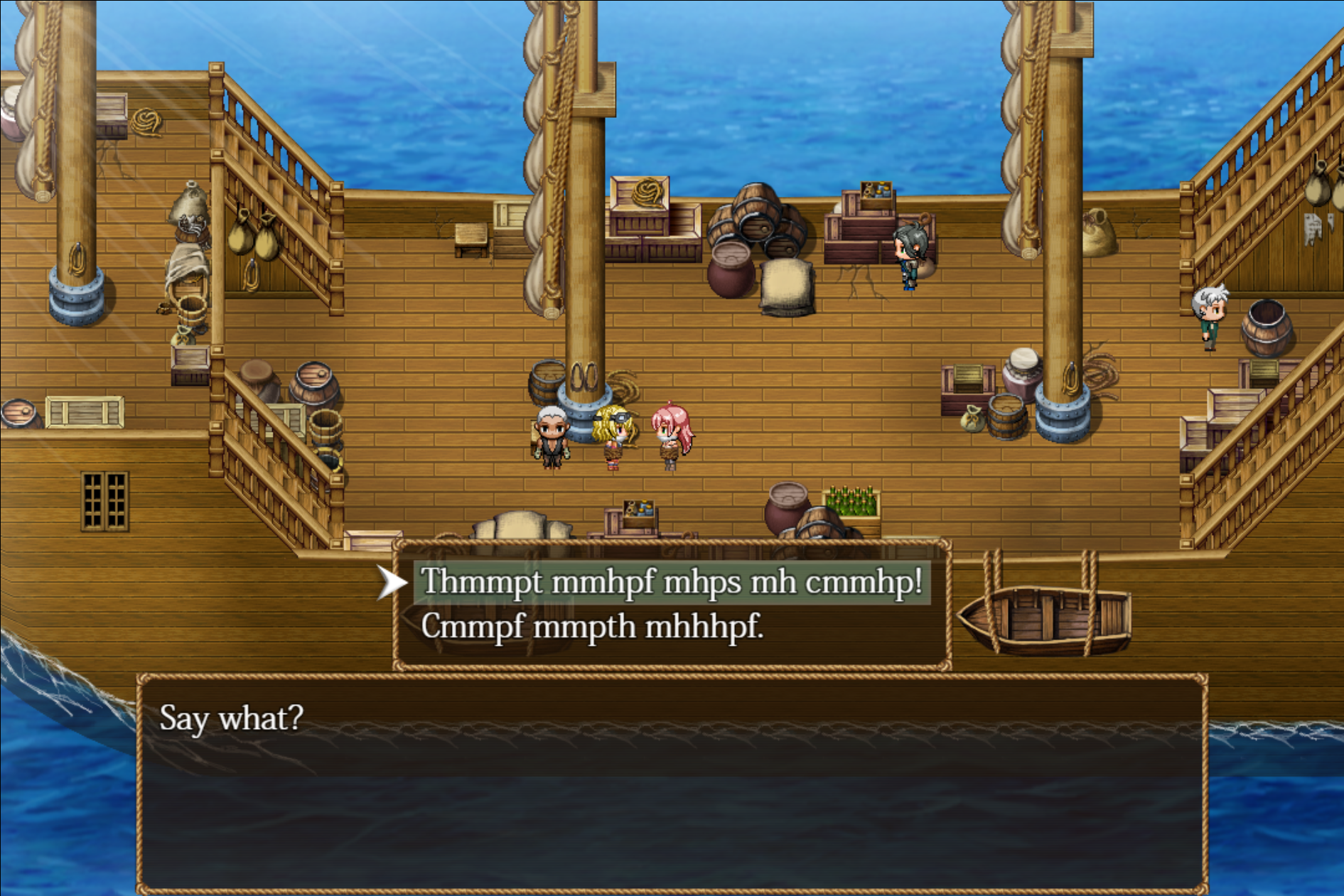 Here we come to an end for the Explain how the escape minigame works and some strategies – Didnapper 2 guide. I hope this guide has helped you with your gameplay. If you have something to add to this guide or believe we forgot some information to add, please let us know via comment! We check each comment manually by approving them!