There were no complete guides when I finished the game, so I said to myself: “Why not?”

There are 20 achievements you can earn in the game. 13 of them are story related and therefore hard to miss. For 2 of them you need to collect notes and teddy bears and the rest are not particularly hard to achieve, but they are easy to miss.

This guide contains SPOILERS so proceed at your own risk!

Let There Be Light


You can find it near the camp, at the start of the game.


Play the JANITOR in the Bathroom.

Receive help from an unexpected source.


Play the JANITOR in the Manager’s Office.


Play the JANITOR in the Warehouse.

Evade the Entity in the toilet.


After falling from the Roof, go to the Bathroom.


You will find it after playing the JANITOR in the Hall A.

Uncover the events of the arcade.


You will get it after finding the third Blue Key and playing the JANITOR in the Main Hall for the third time.

Fastest Gamer in the West


You will find them after the Point of No Return.


Defeat the Entity with your guns shortly after finding them.


Last Boss of the game. Shoot the Yellow Orbs while avoiding its light.


If your score is less than 15000 after destroying the Source’s last Yellow Orb, you will get this ending.


Your score must be at least 15000 after destroying the Source’s last Yellow Orb. Shoot the Yellow Orbs surrounding the JANITOR inside the Source and you will get this ending. You’re locked to this ending if your score is higher than 15000.

For more information on how to get the highest score normally possible, look at “HIGHSCORE” in the “Other Achievements” section.

Read all notes in the game.


There are 10 notes you need to find and read. Beware that you can’t access Note #1 and Note #9 again after finding them. Notes are also visible in the dark, so if you can’t find them, turn off your flashlight.

On the tent at the camp, at the start of the game. 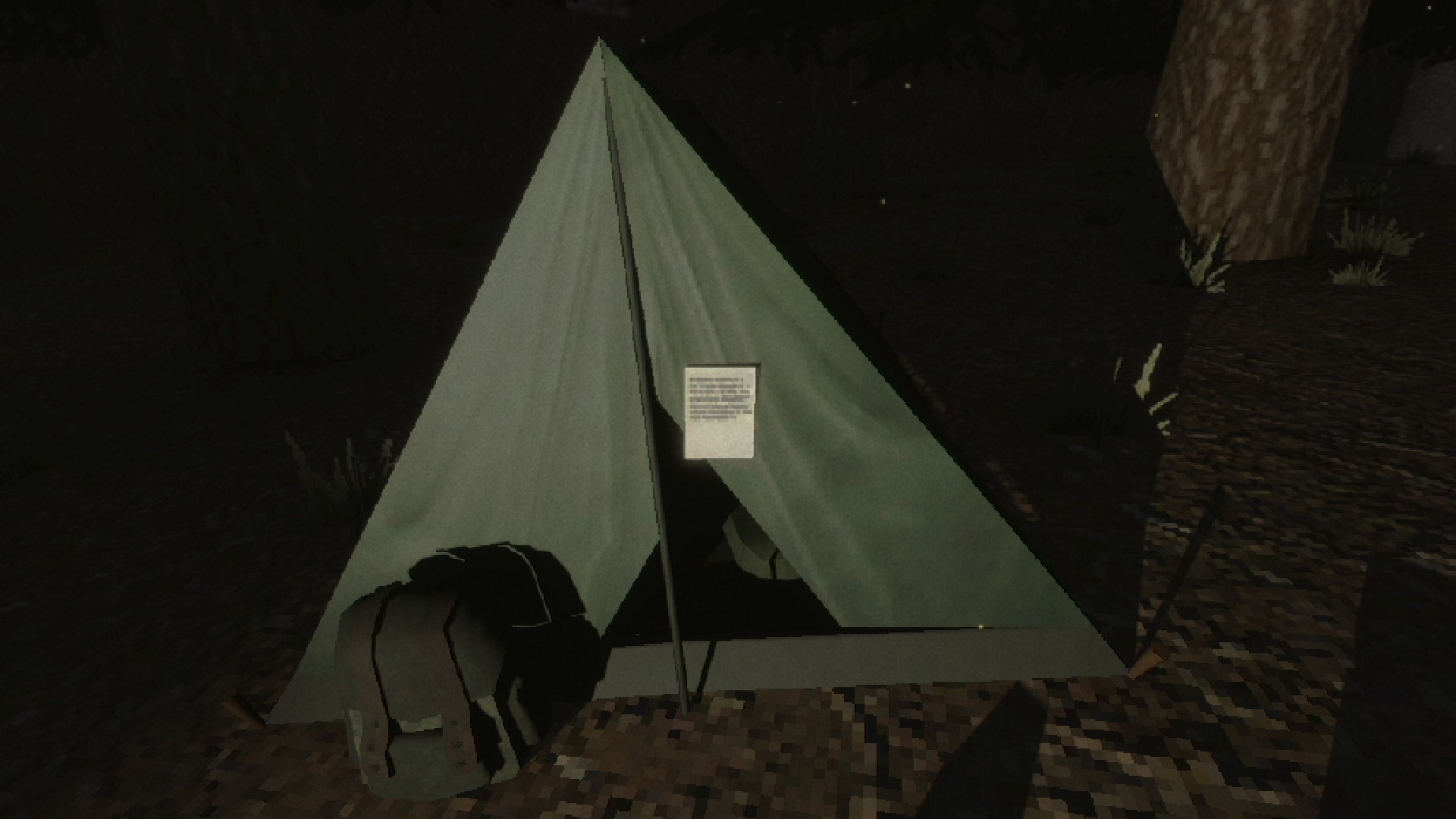 In the room where you find the Green Key, on the bulletin board. 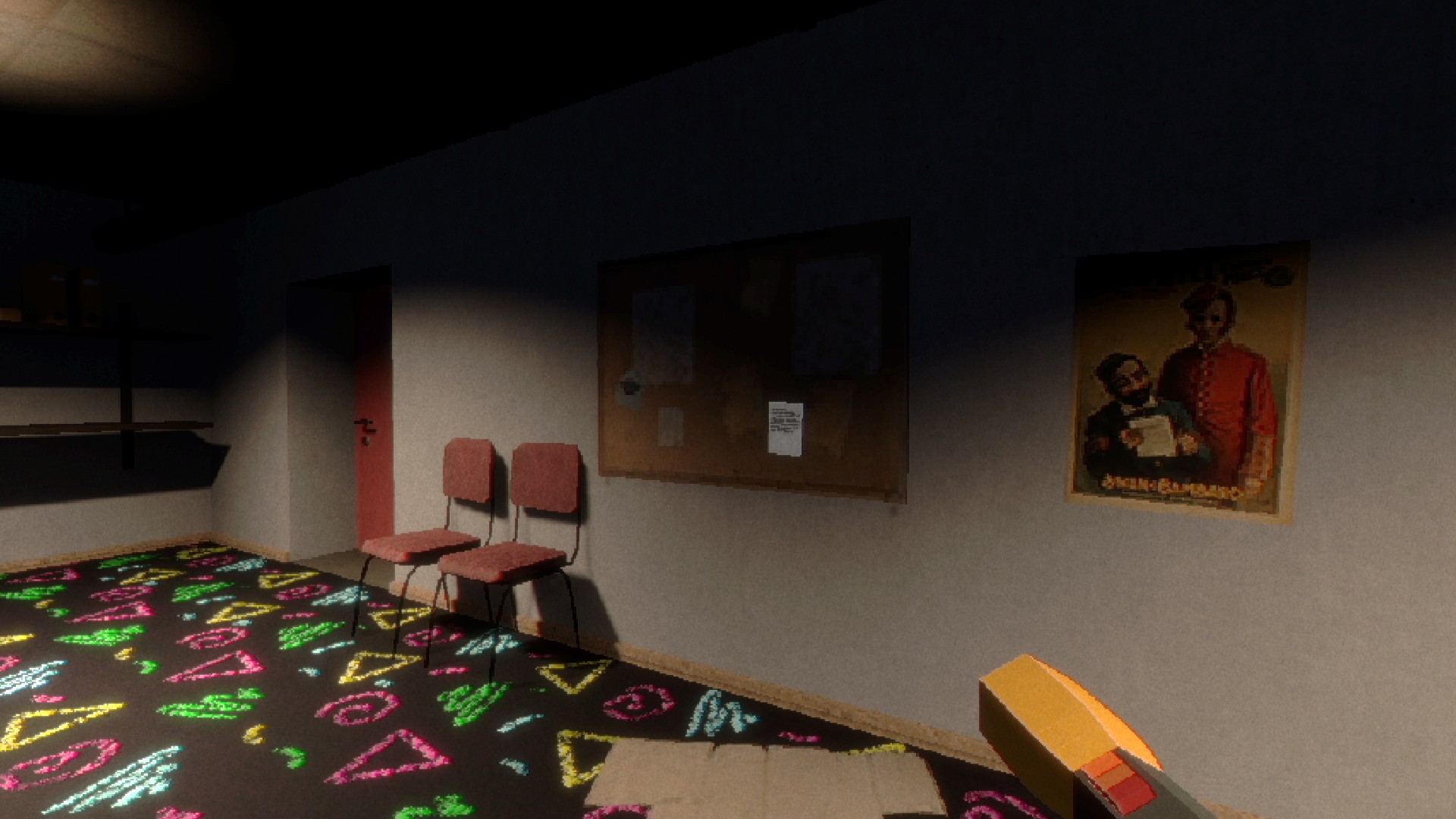 In the Manager’s Office, where you play the JANITOR for the second time, on the bulletin board. 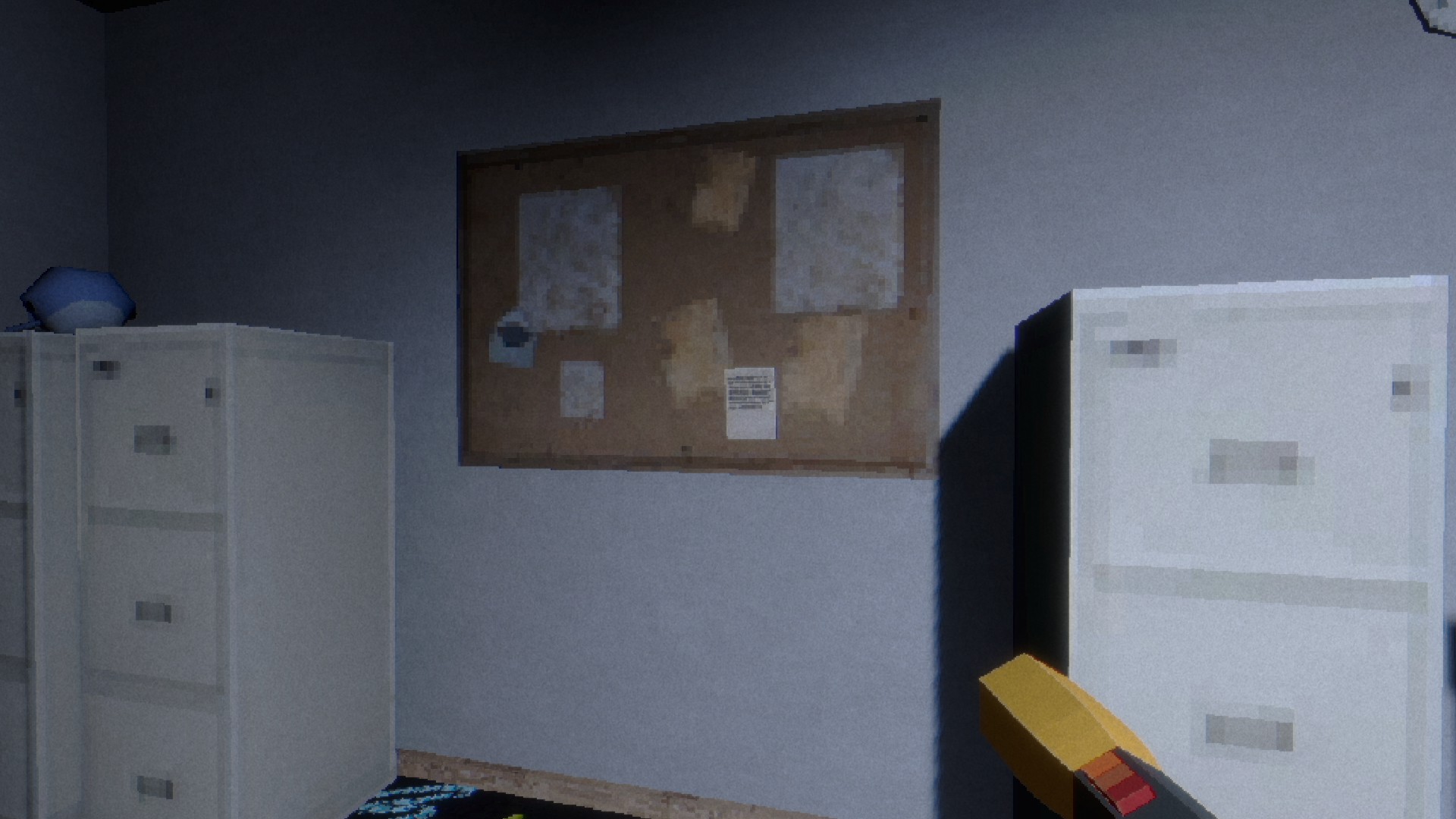 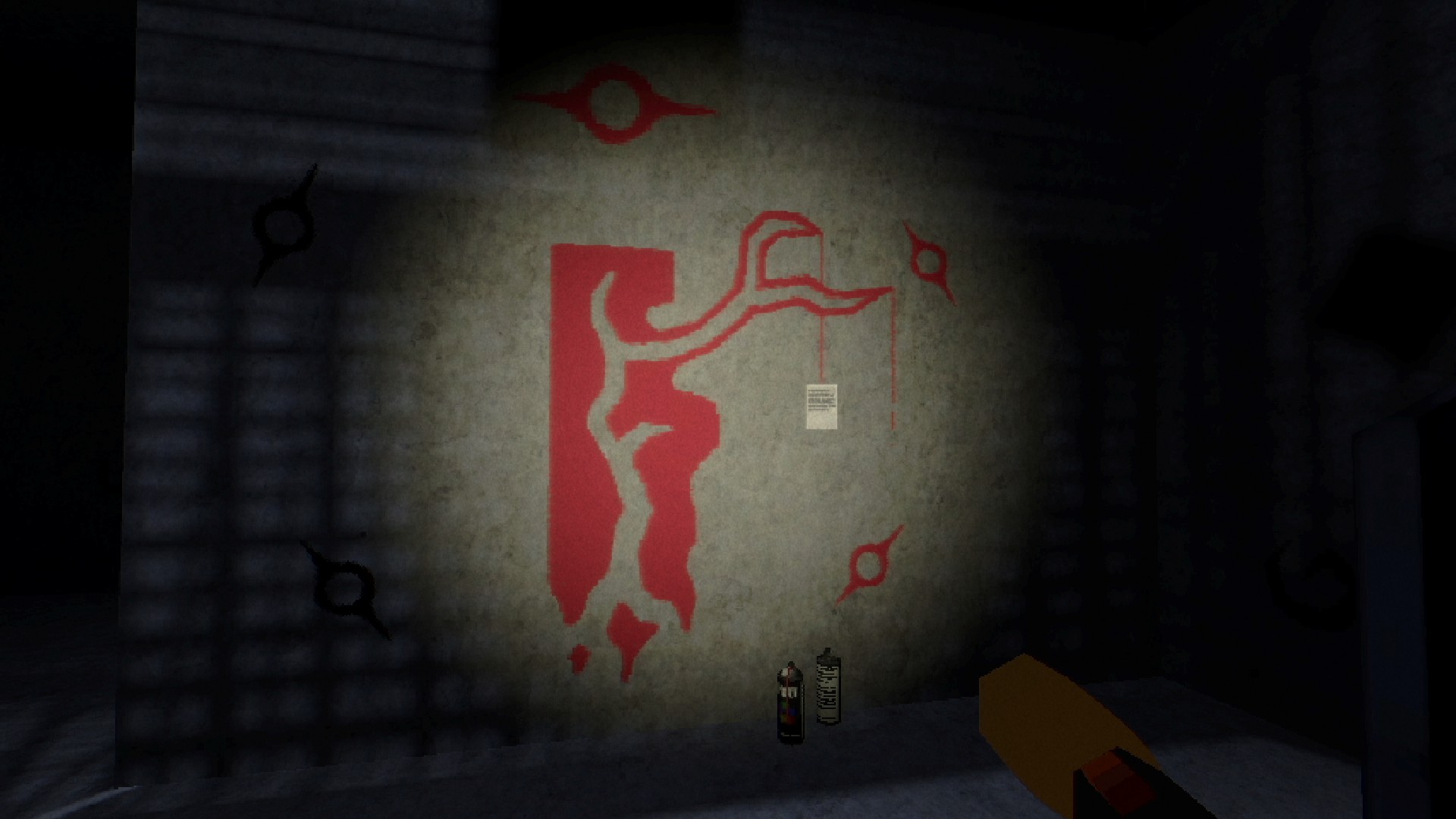 In the Main Hall, on the wall with graffiti. 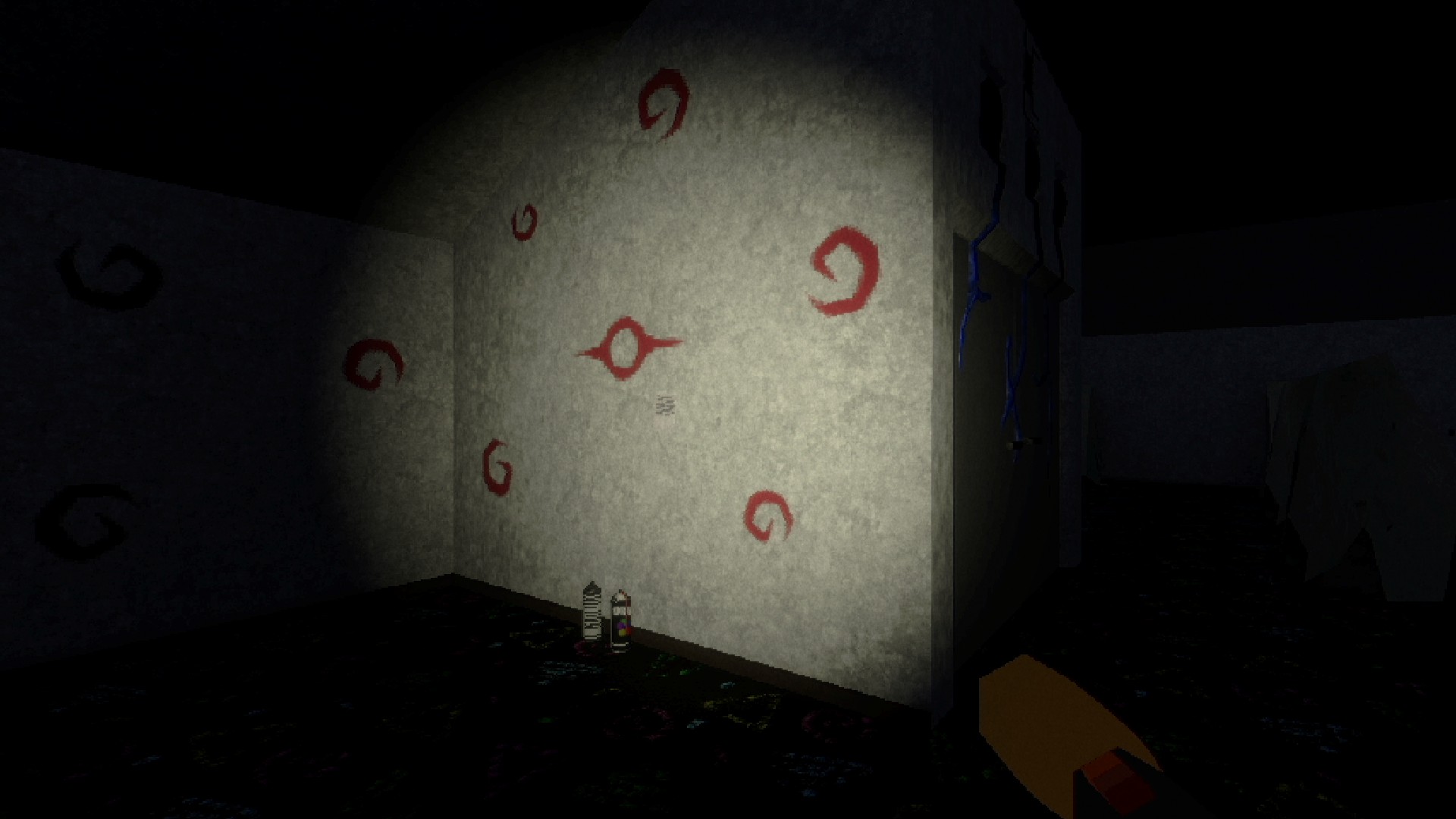 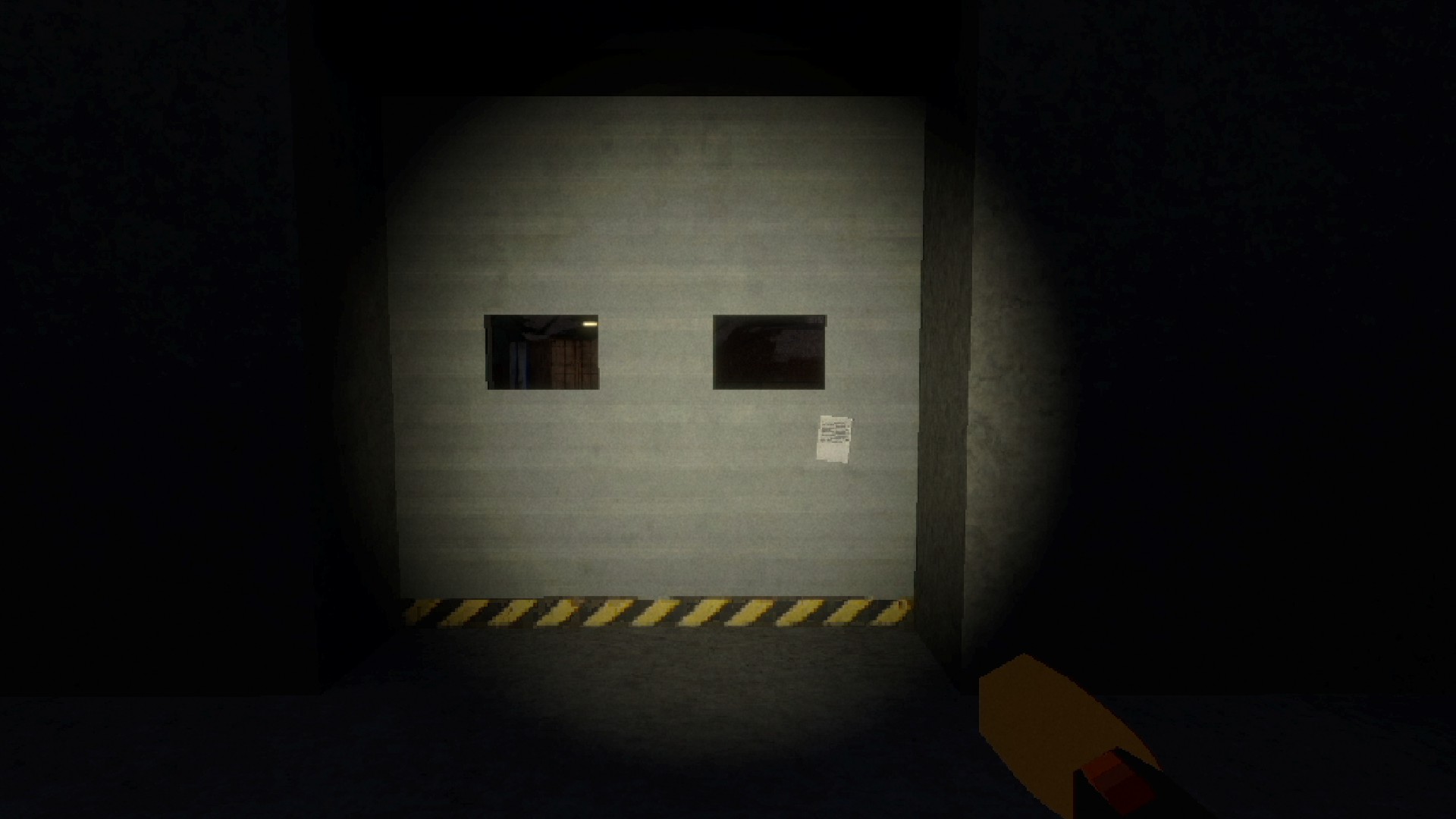 In the Warehouse, right beside the Blue Key. 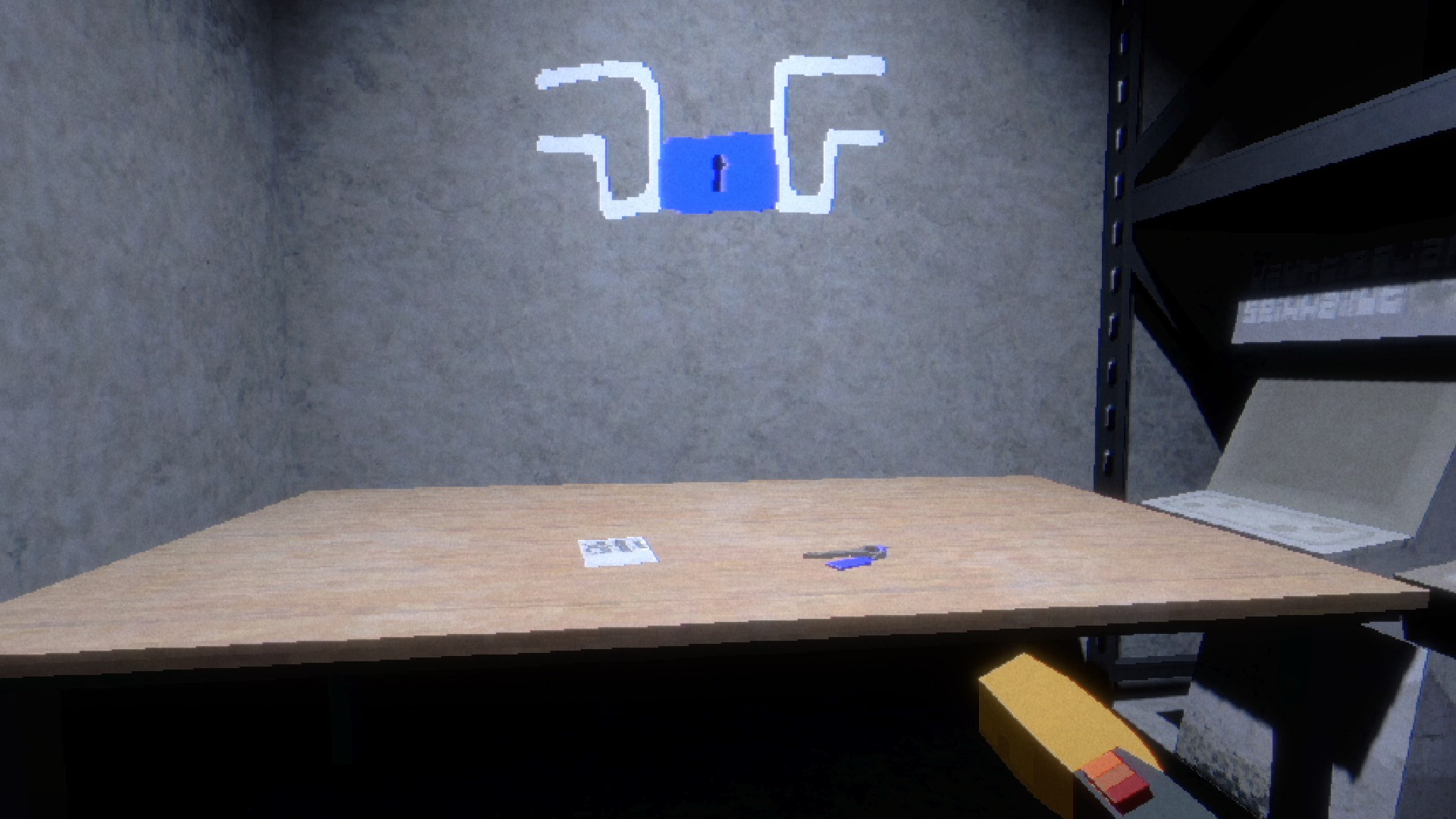 In Cafeteria/Hemo’s Burger, on the bulletin board. You can access it through Hall A. 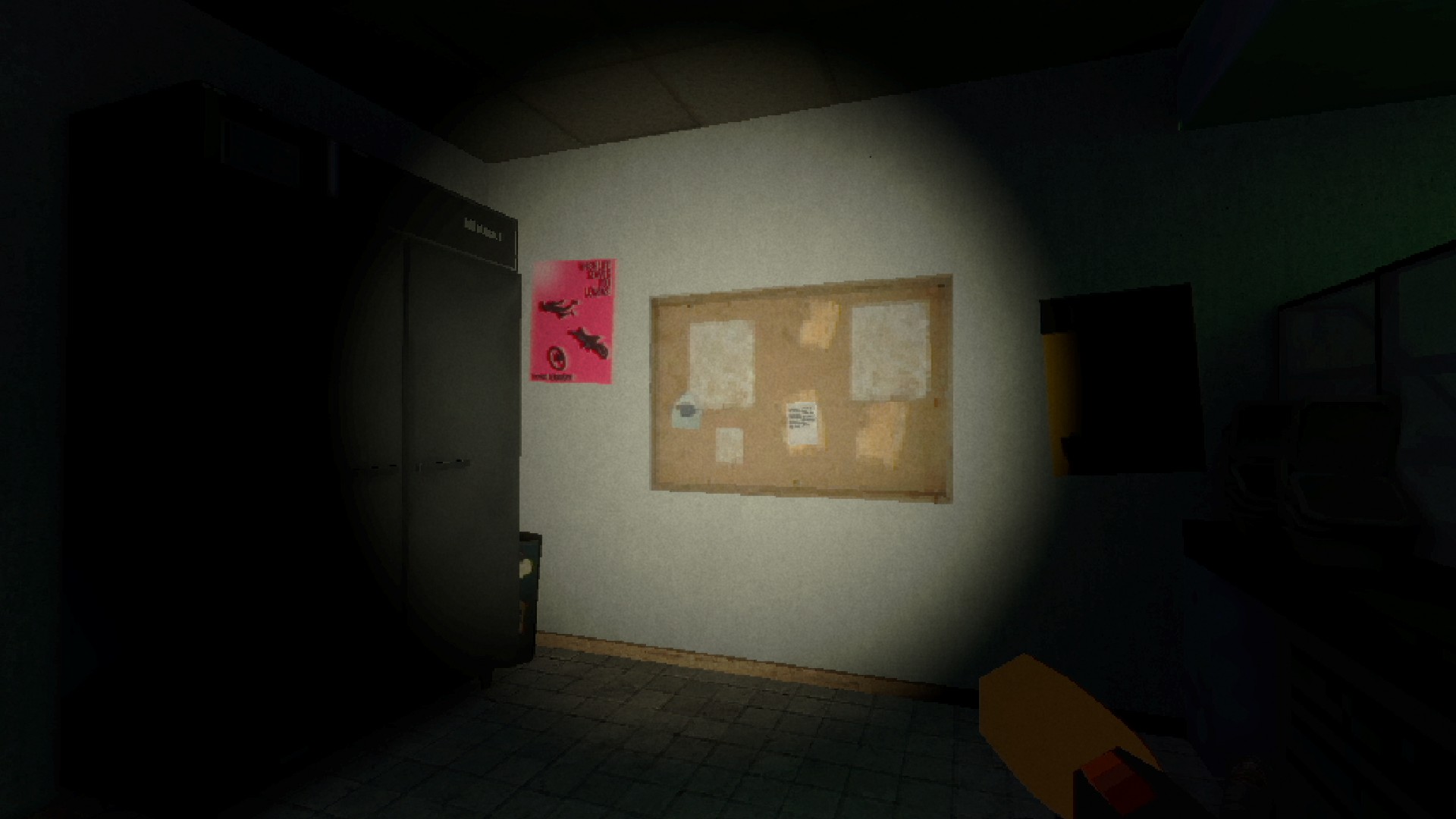 In the third section of “Blood Arcade”, after you used the third Blue Key. 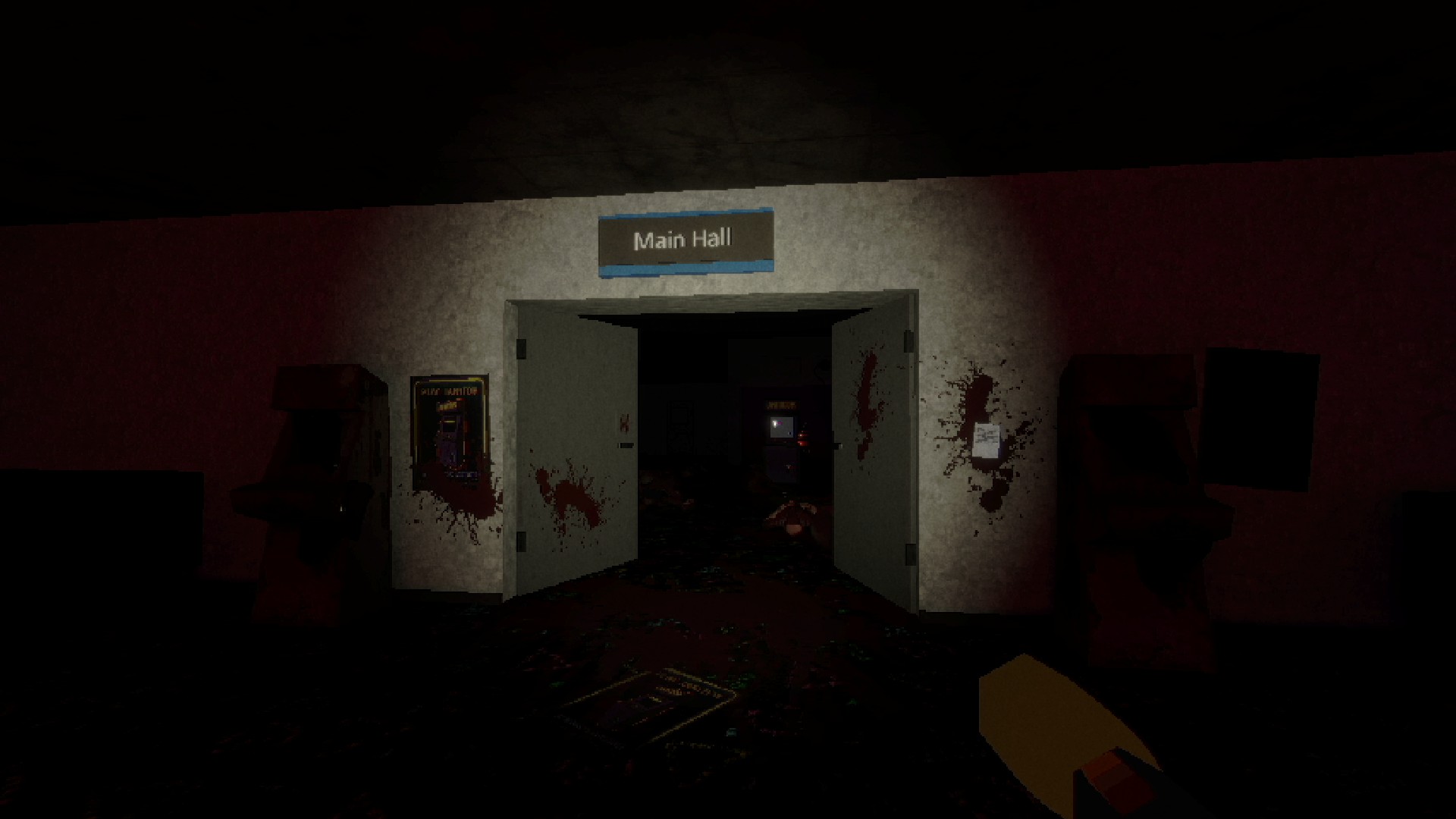 After the Point of No Return. 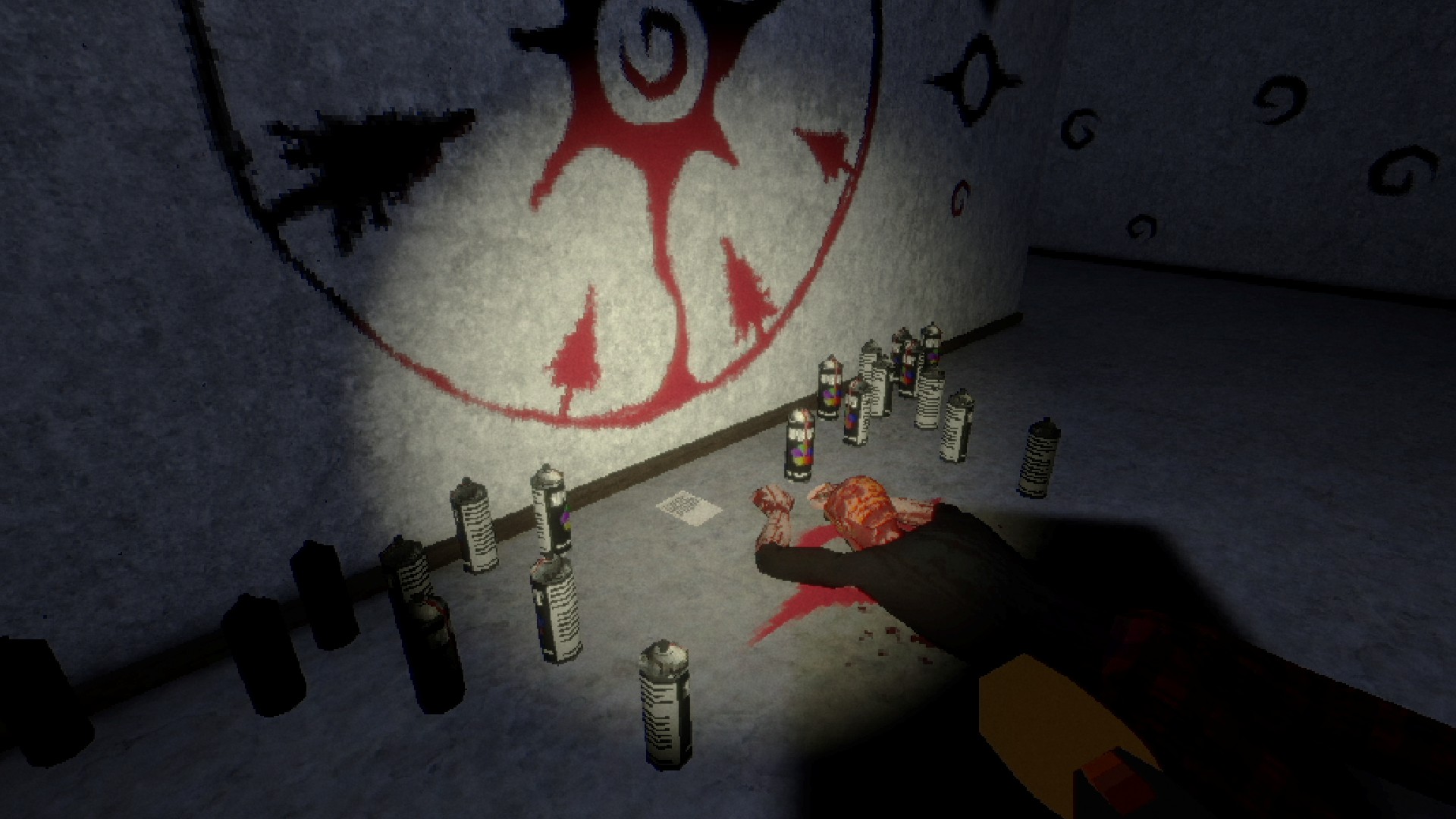 
You need to find 4 teddy bears and then go to the not-so-secret teddy bunker.

Here are the places where you can find them:

On the Roof, in the vents. You need the screwdriver for opening the vents. 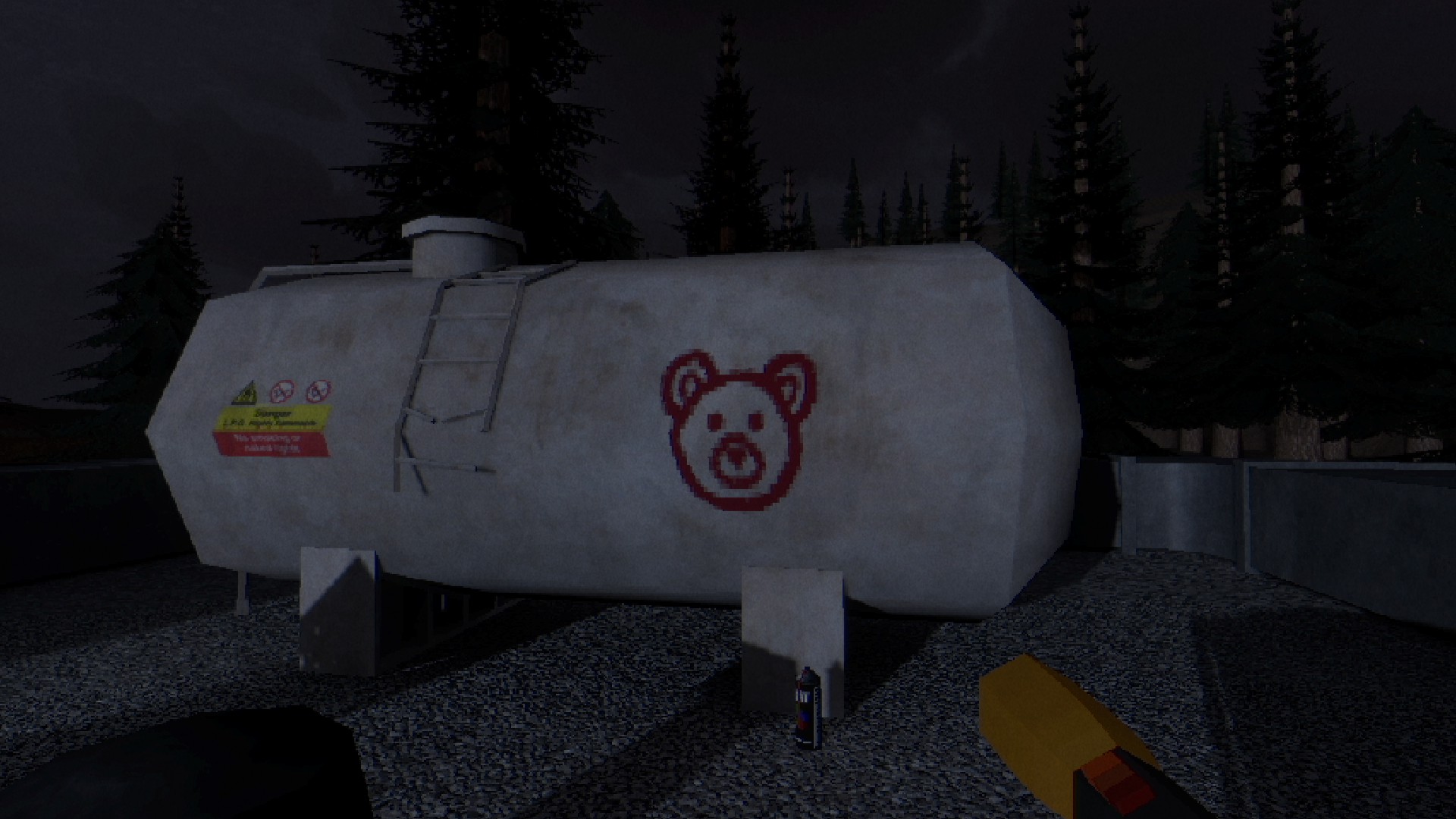 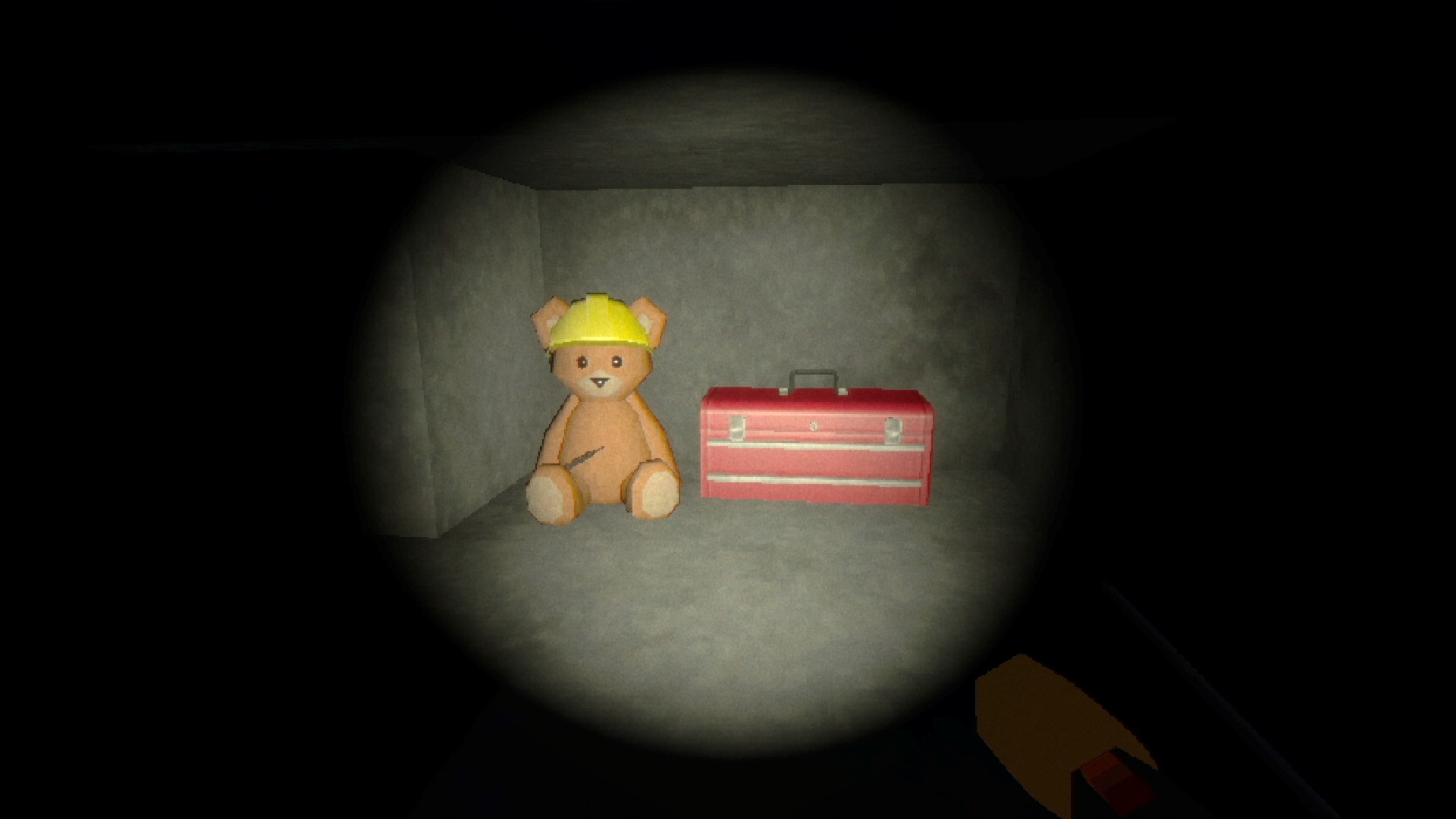 Outside of Manager’s Office, before the door to Warehouse, in a secret room you can access through the vents. After getting out of vents and climbing up the shelves, you will reach the bear. 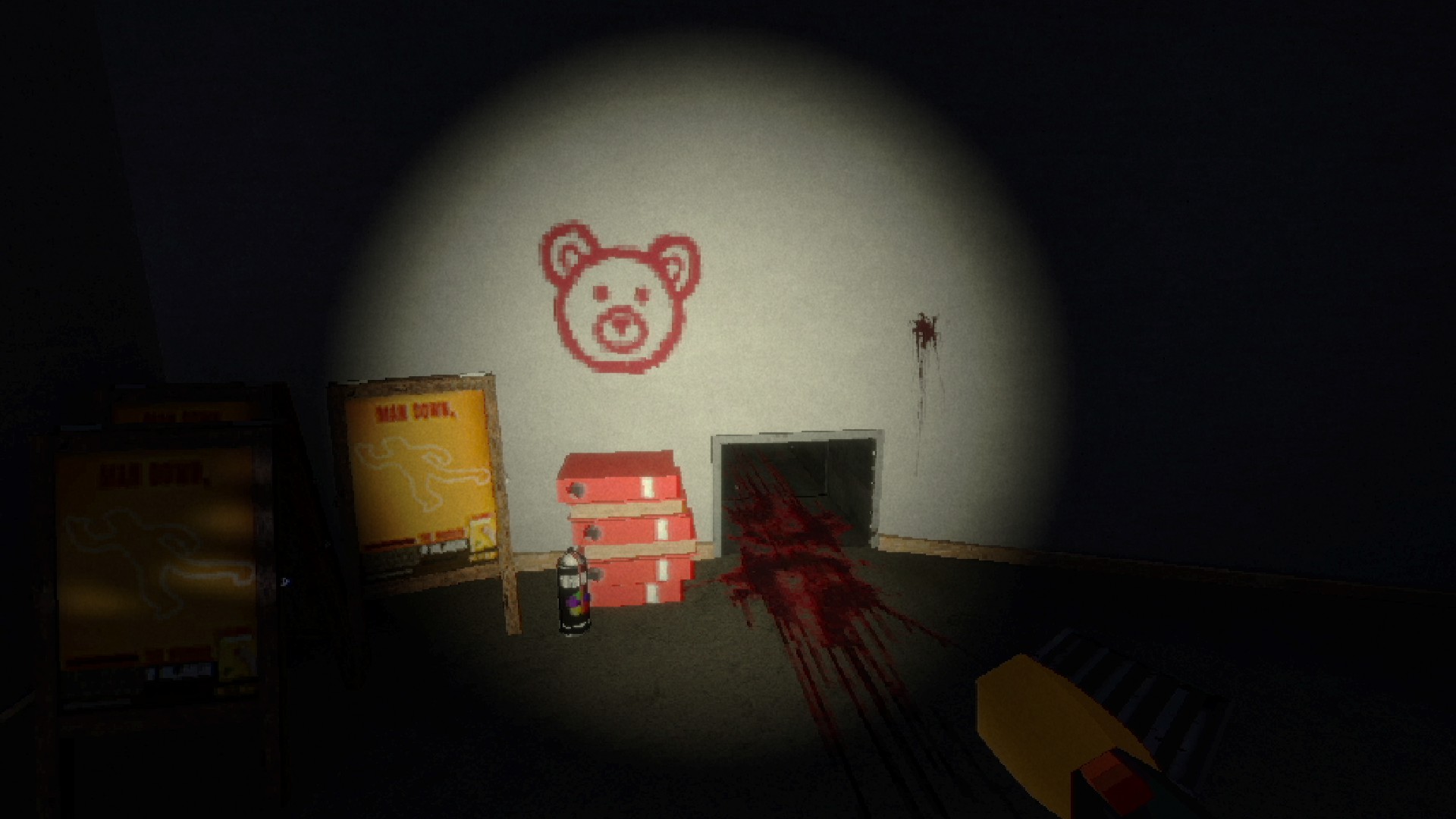 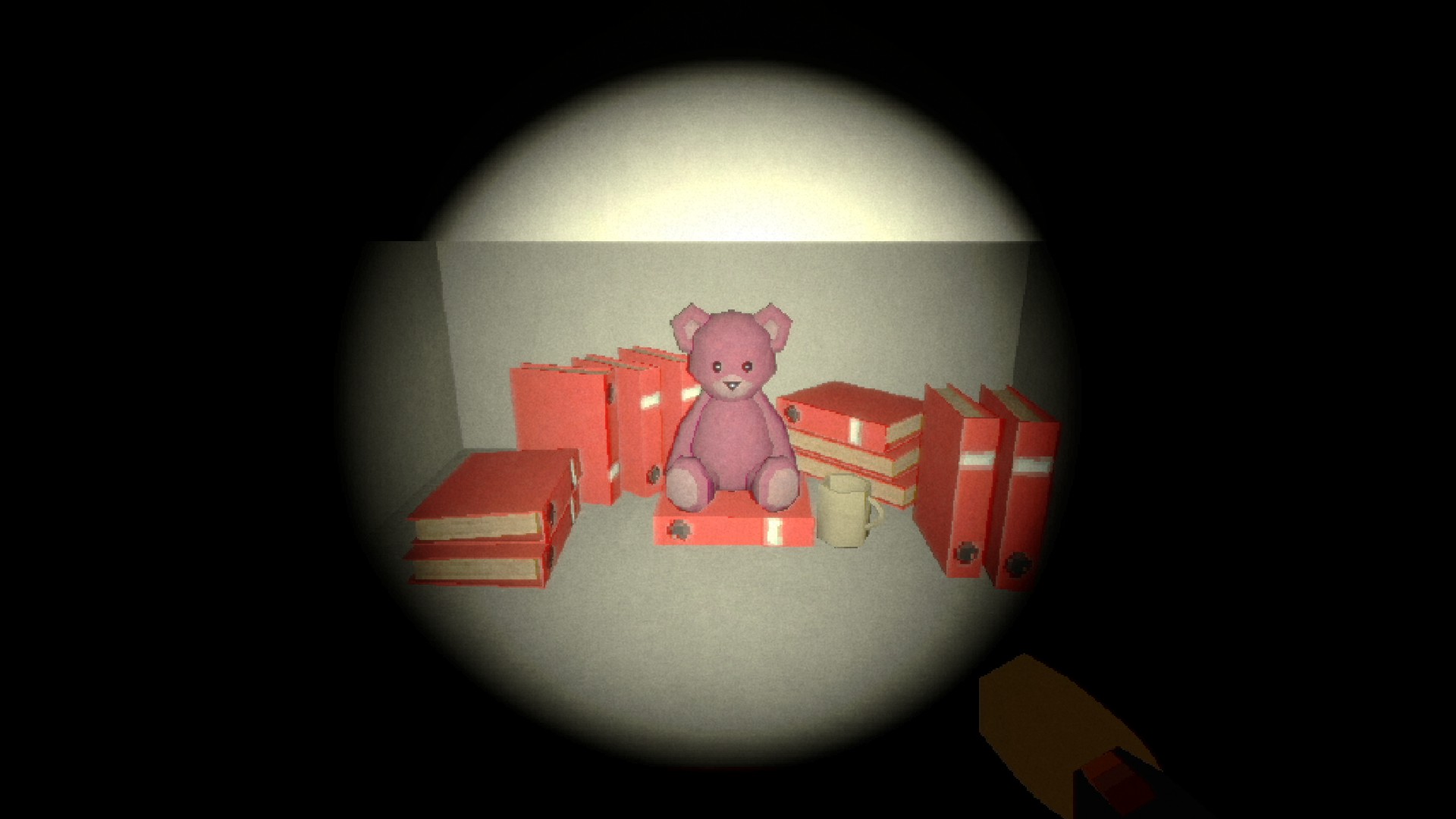 In the parking lot back of Hemo’s. You can access it through the Warehouse. There is a vent under the “Vegas Pot” pinball machine, at the right side of Note #6. It will be behind you after playing the secret JANITOR cabinet. 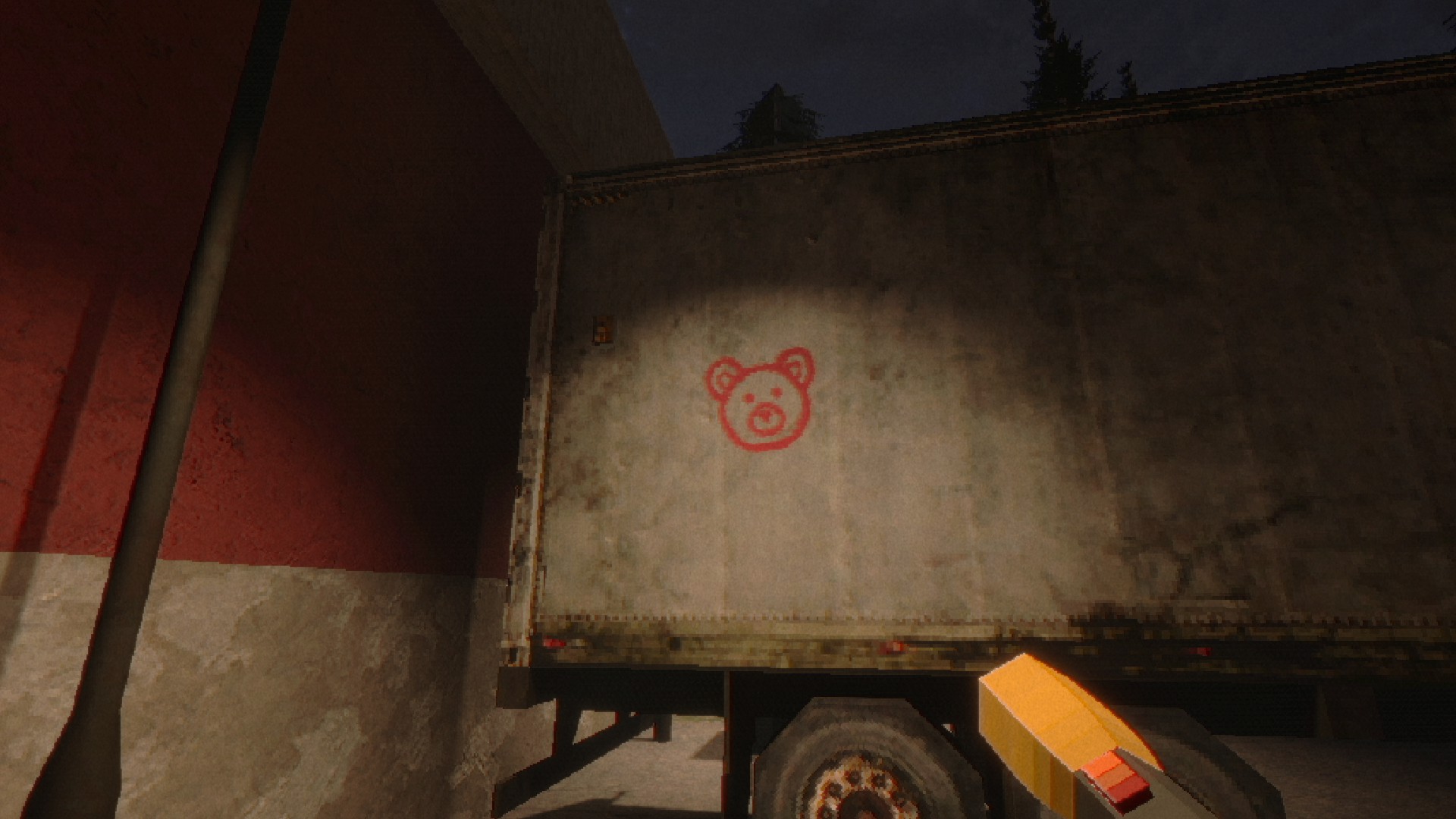 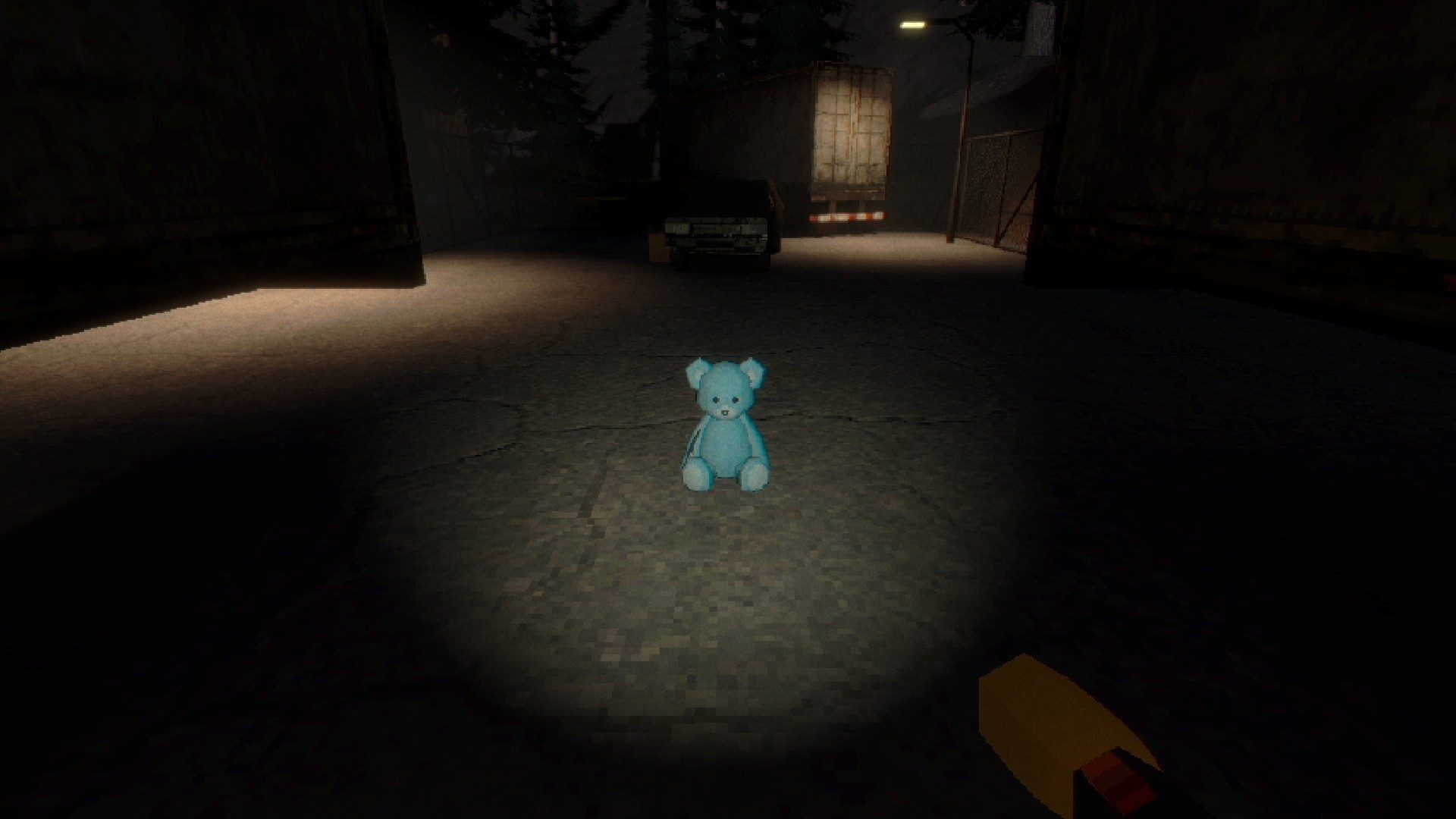 Inside the Janitor’s Closet in the Bathroom, where you play the JANITOR for the first time, behind the arcade cabinet in the vents. You need both the screwdriver and the extinguisher. 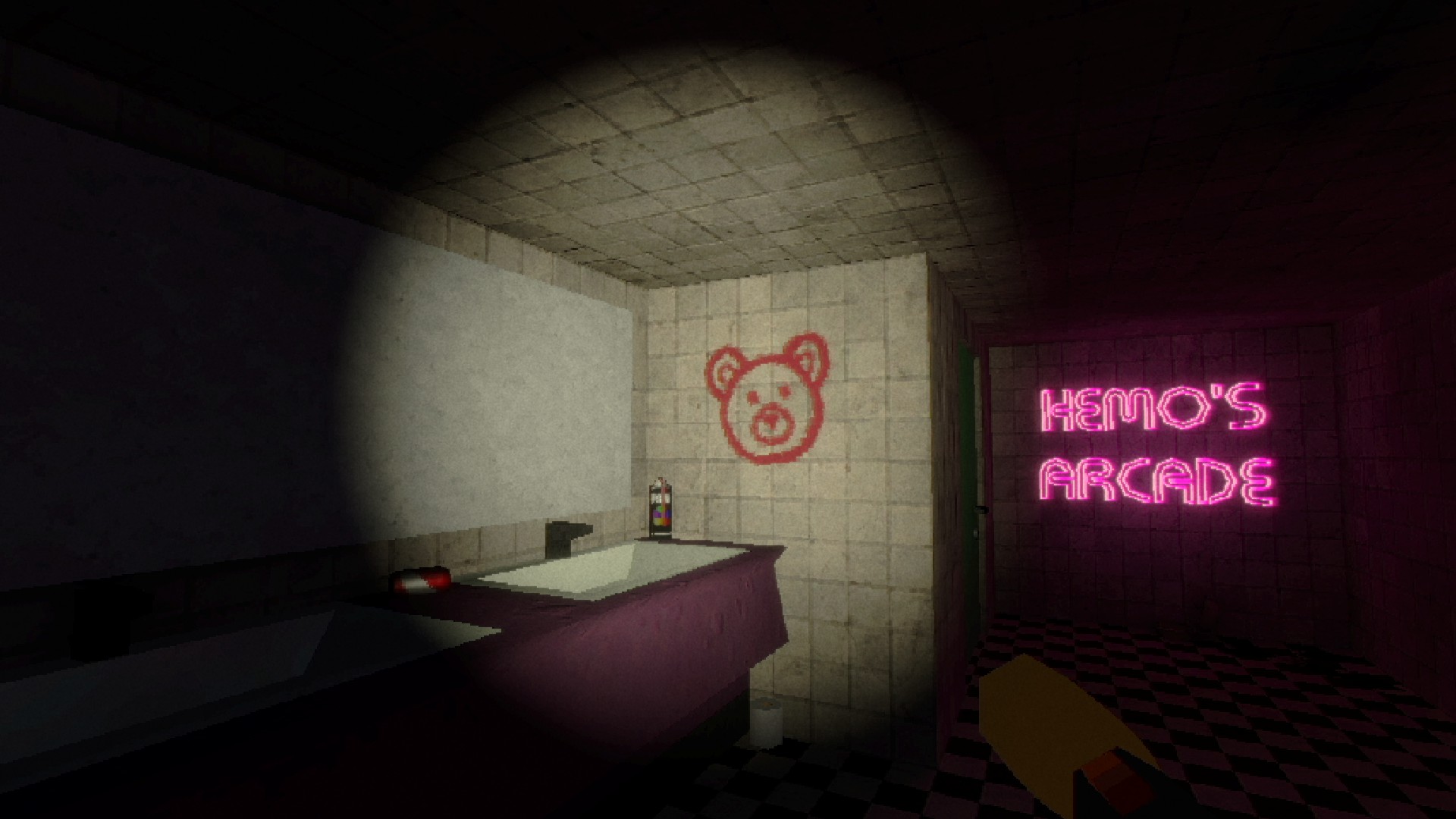 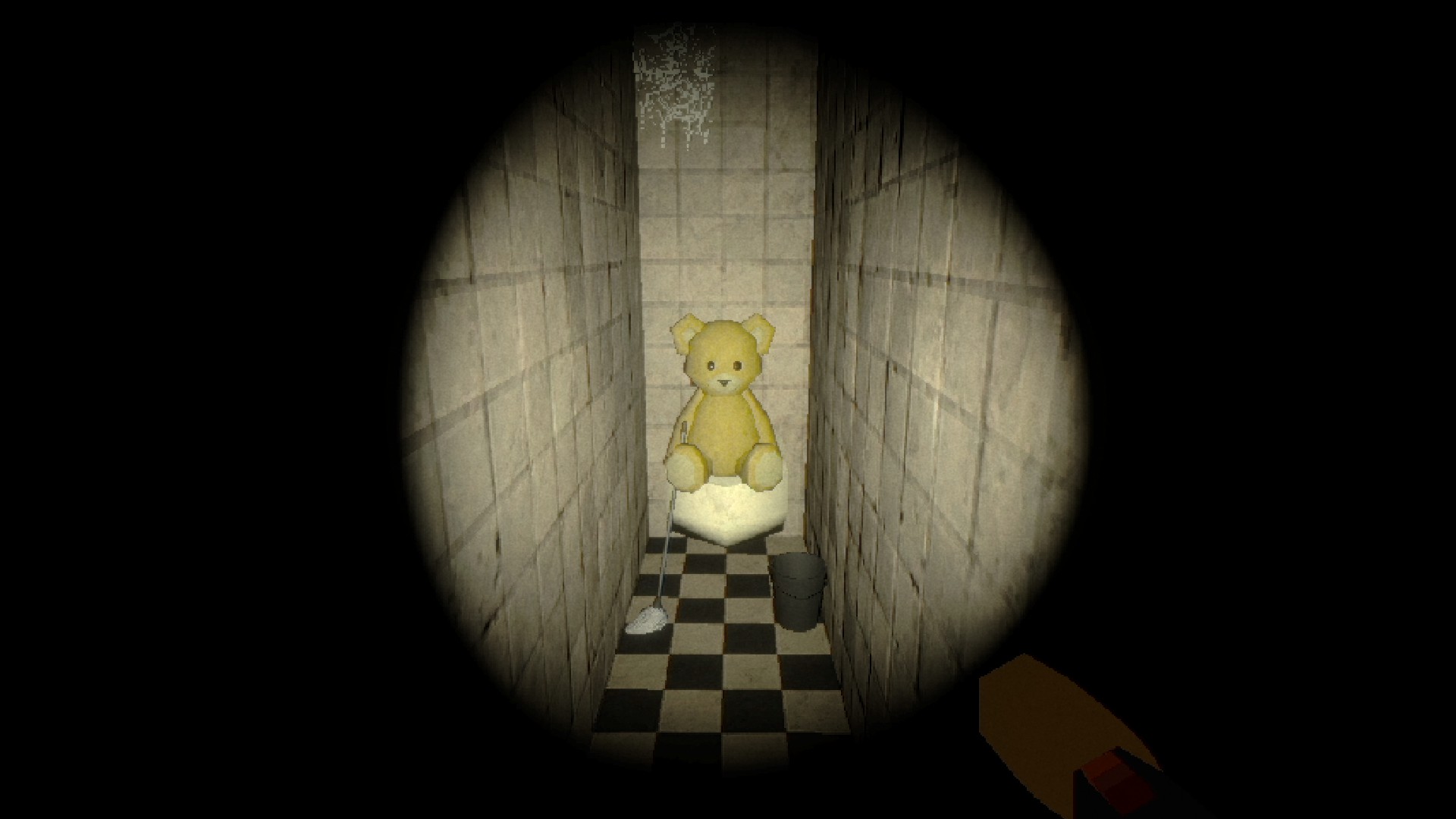 You will find it after exiting Hall A to the outside and before the room where you find the extinguisher. Enjoy the spooks! 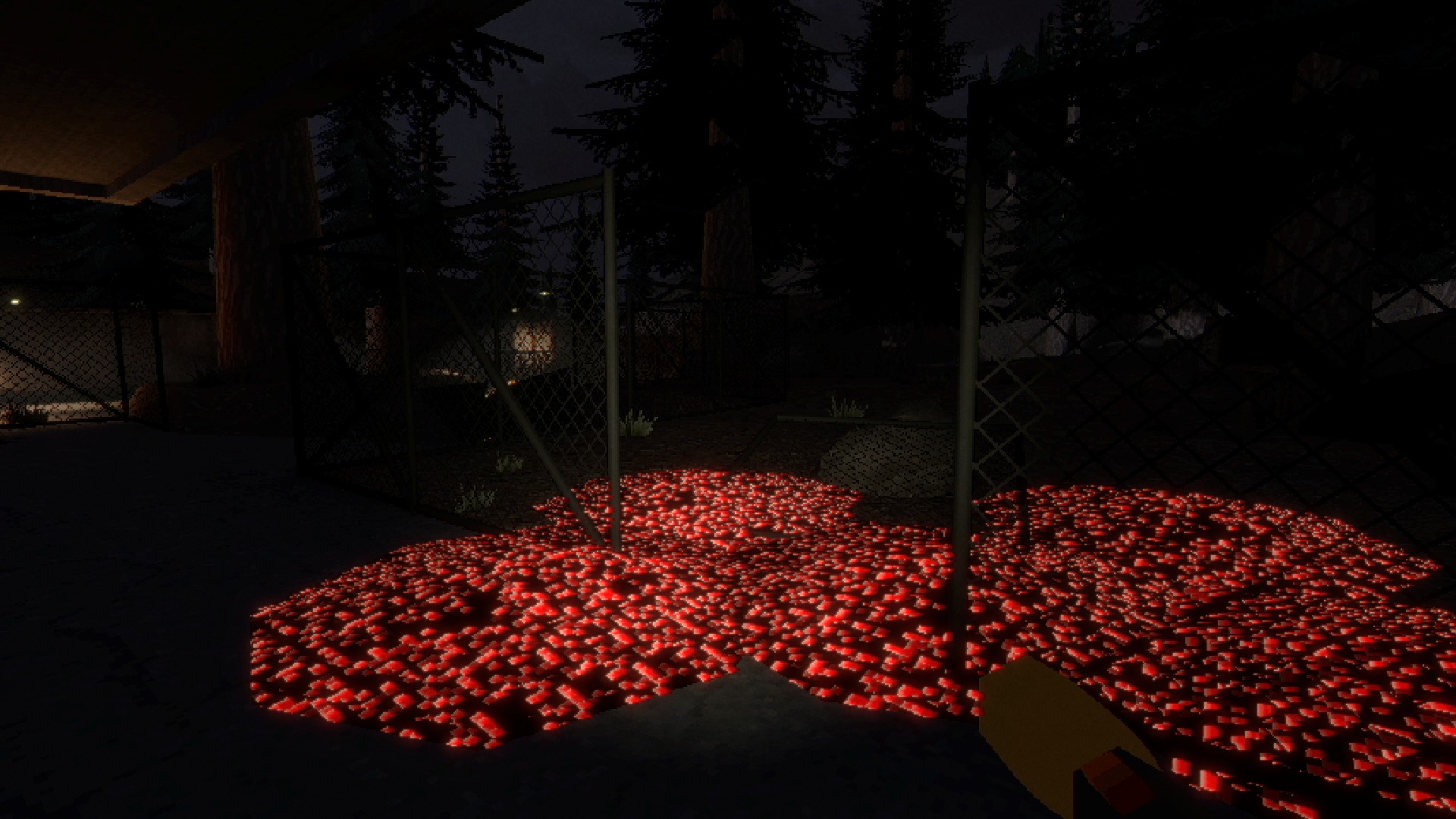 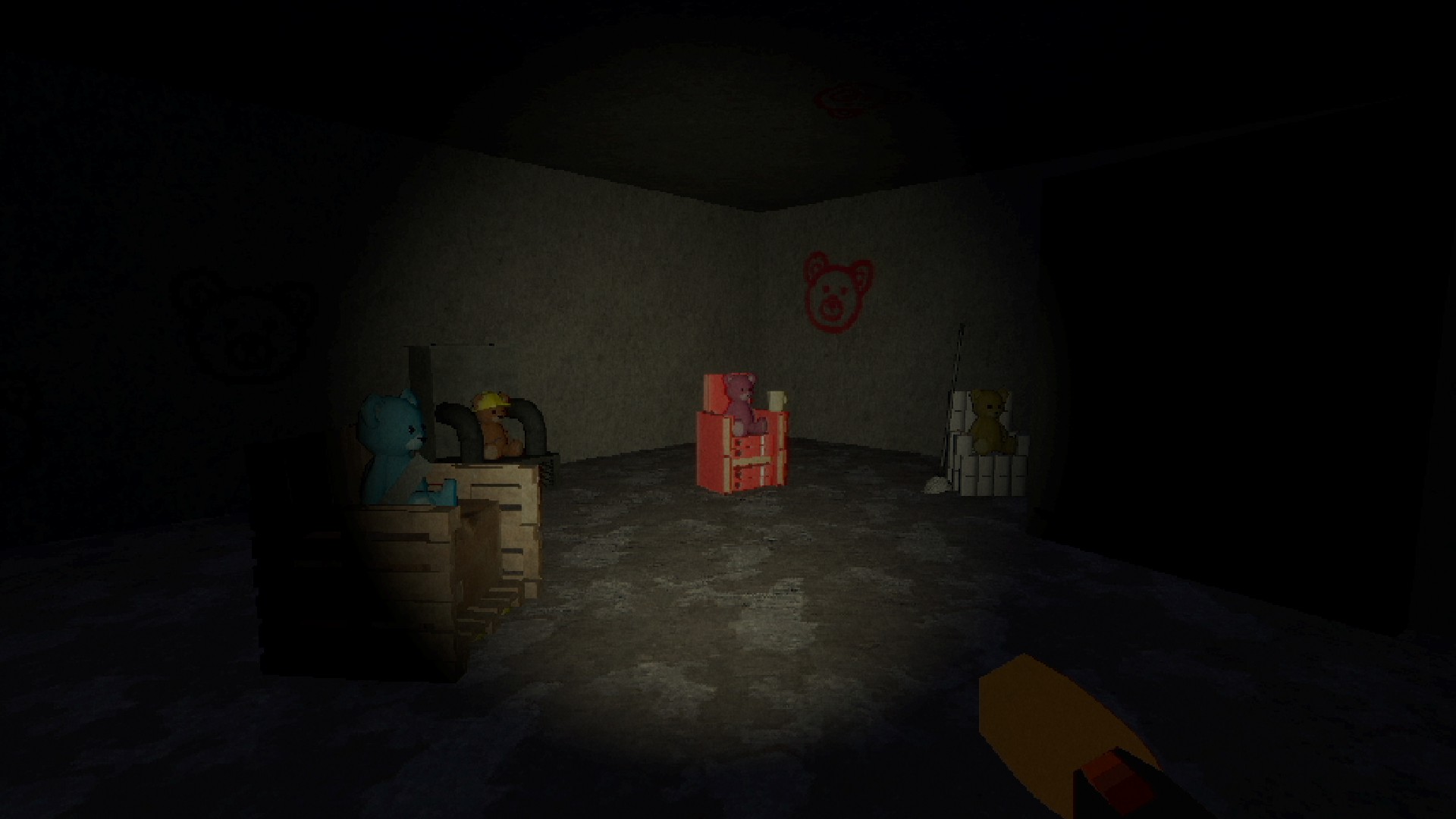 
Some arcade cabinets have coin slots that can be opened with the screwdriver. It doesn’t work on the JANITOR cabinet however. 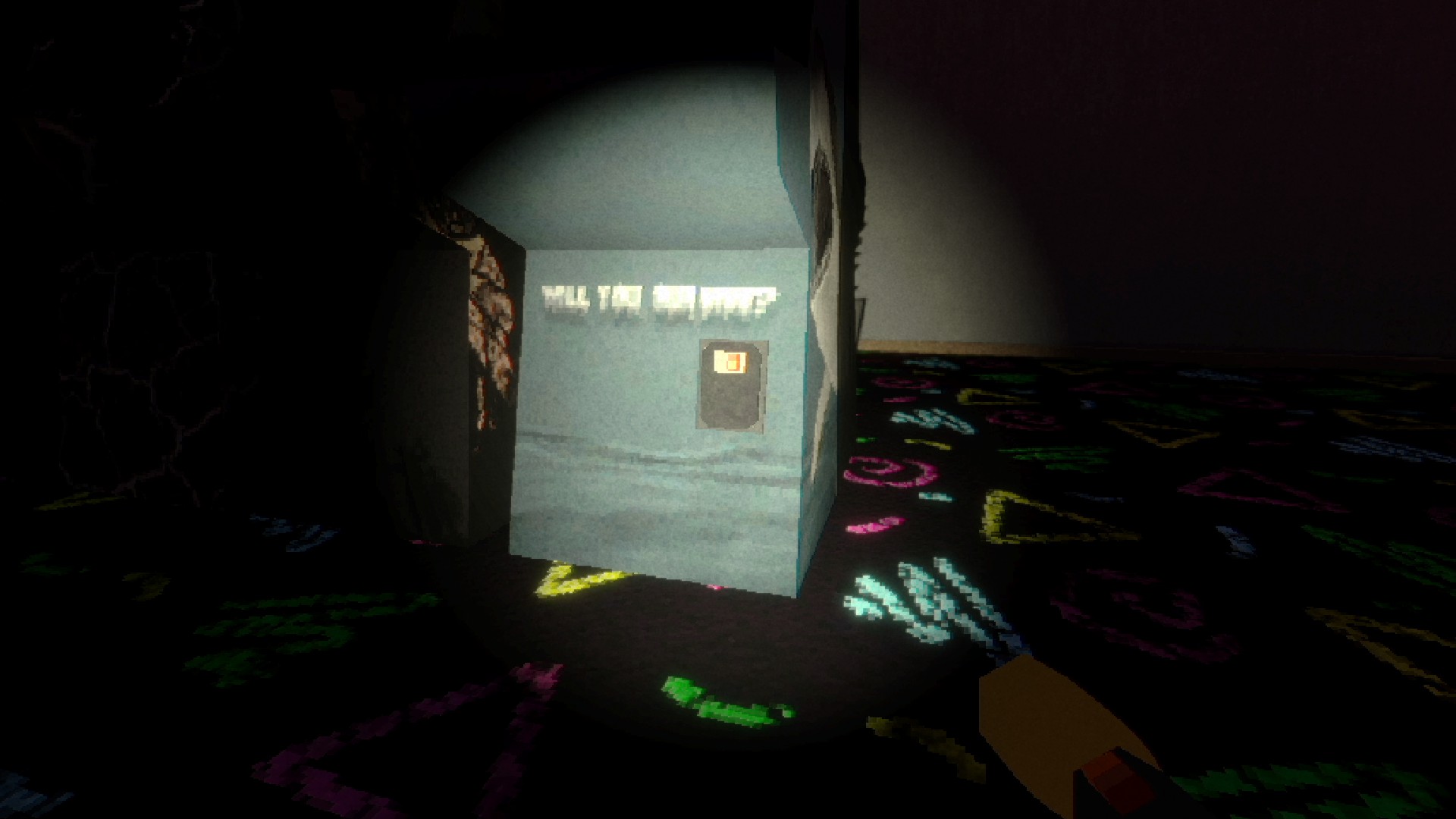 Tease the Entity with flashlight.


Shine your flashlight at the Entity until it notices you. Be ready to run and hide!

Use extinguisher on the Entity.


Use the fire extinguisher on the Entity at any point in the game, to no avail.

Reach the maximum score at JANITOR.

Beware that before the Point of No Return, your score must be 12900.

You also don’t need to find the Teddy Bears for the Highscore.

Beat the game in under 60 minutes.


The game is short, so you can easily finish it under 35 minutes if you hurry. If you want to finish the game even faster or need any help, check out the Speedrun – [speedrun.com]  page of JANITOR BLEEDS!

Just happy to help! Let me know if there are any mistakes or if I missed something. 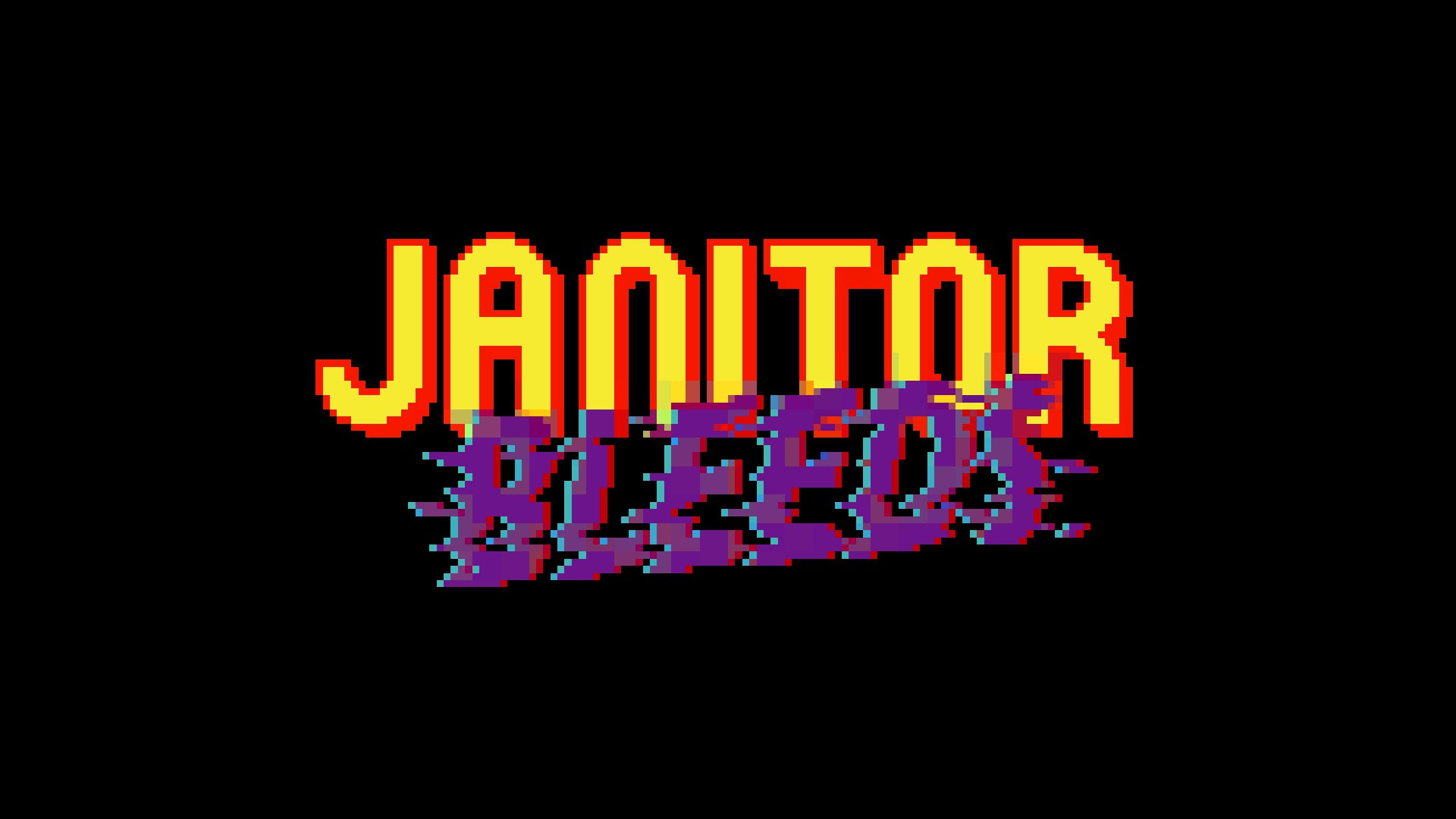 Here we come to an end for the Full Achievements Guide – JANITOR BLEEDS guide. I hope this guide has helped you with your gameplay. If you have something to add to this guide or believe we forgot some information to add, please let us know via comment! We check each comment manually by approving them!