Welcome to my humble 100% achievement guide for “My life as an archeologist”! Feedback always appreciated.

This guide is divided into categories for easy consumption.


Under each section, I noted how many achievements are in each corresponding category to make it easier for the reader to keep track of their progress.

Papa will be so proud! 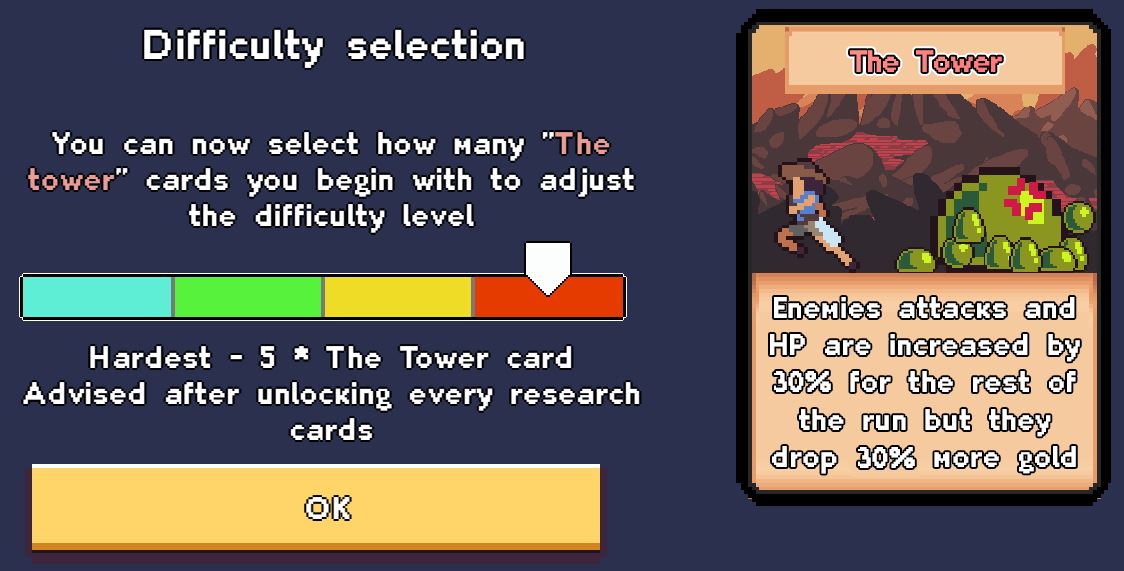 The difficulty slider needed to complete You’re not the boss of me is locked behind completing the game for the first time. The game suggests having all the research unlocked before trying to beat the hardest difficulty because you will definitely need the power spike to survive early on. Unlocking all the research cards for purchase is just a matter of repetition. To save time, try getting the Mimics from the Tarot cards sooner rather than later.


You’ll need gold to buy out all the research cards. In this game, you have to hover over the coin to collect it. There is an artefact that increases the pull zone of your cursor to make collecting gold easier. Incrementally tick the difficulty slider higher to activate extra gold gains as the difficulty scales up.

While the game isn’t tough, take your time during your first run on the hardest mode to guarantee success. With 5x Tower activated (150% more damage taken), you’ll need to be careful until you unlock the 2 defensive skills from the Theologist tree.

And don’t make me come back…

Beat the final boss for the first time.

You’re not the boss of me

Beat the final boss on the hardest difficulty.


The two builds below are builds that I personally used with success on the hardest difficulty. There are many ways to play and in this game and these are just my opinions. I hope you find it informative. 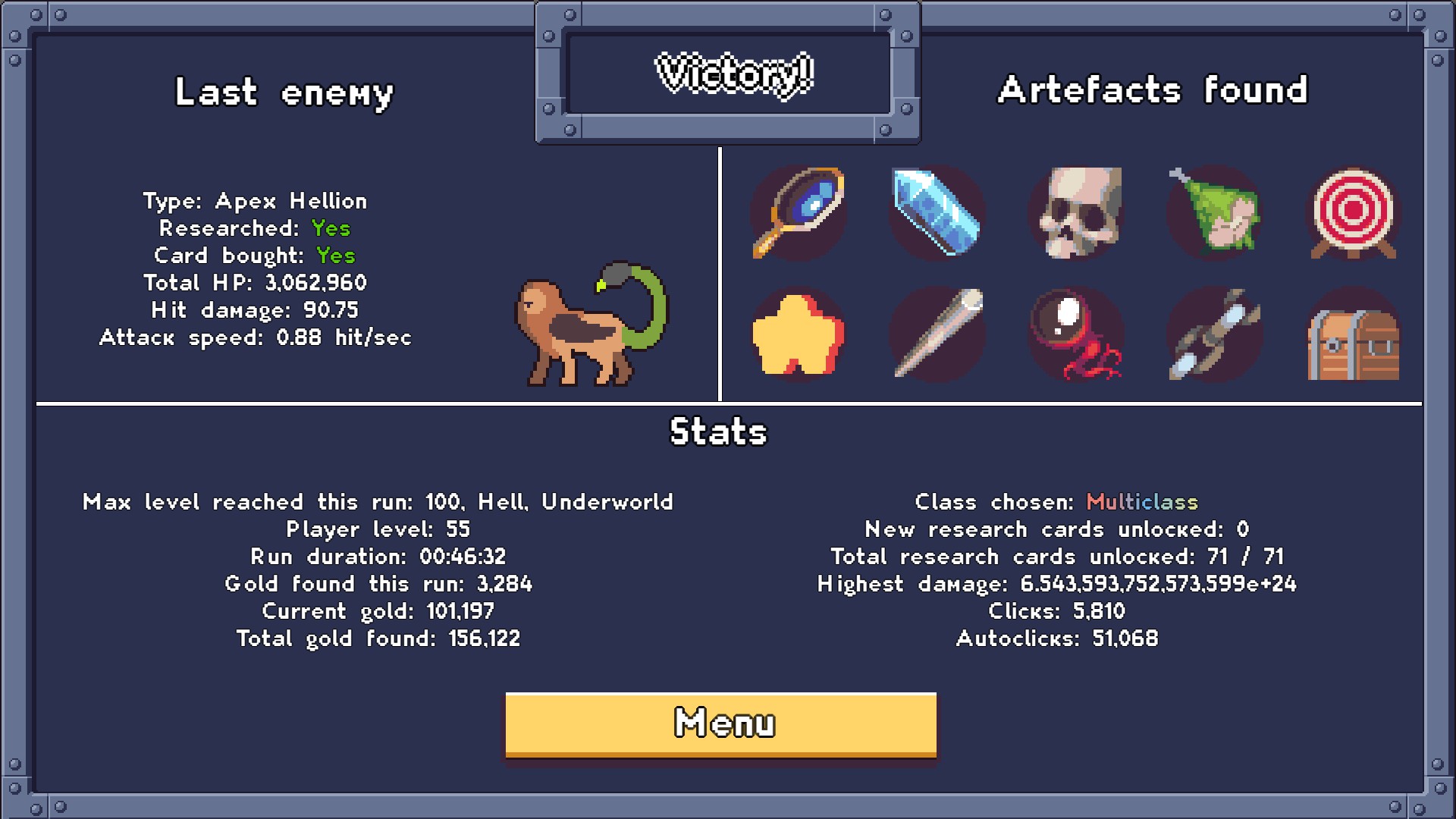 For the sake of minimizing redundancy, please visit this guide – [steamcommunity.com]  instead. It’s very informative and covers tarot cards, stats, skill trees, and equipment. Instead, I will be posting my take (the skill trees and some tips) on the 2 builds I mentioned under One punch gal. 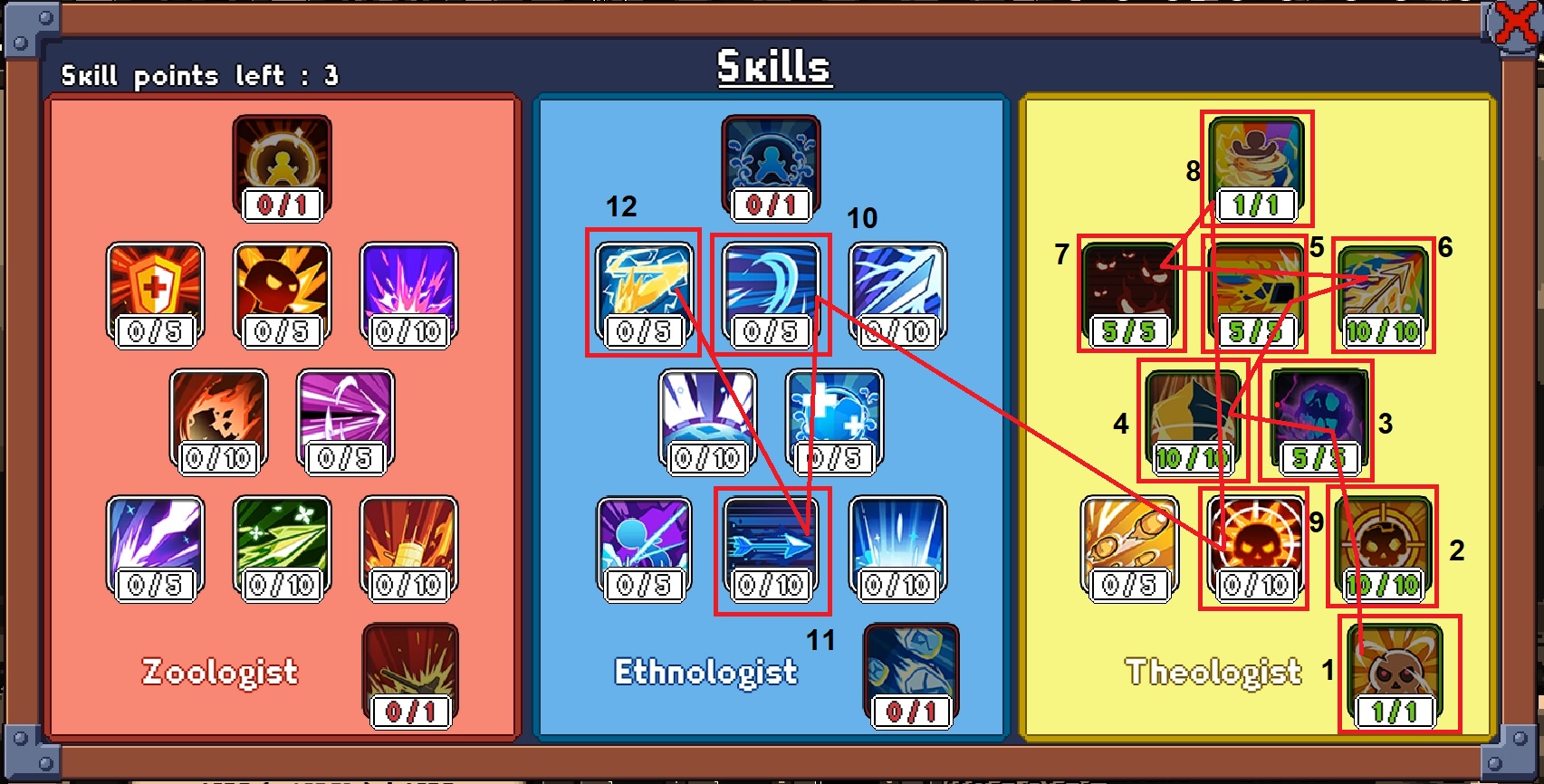 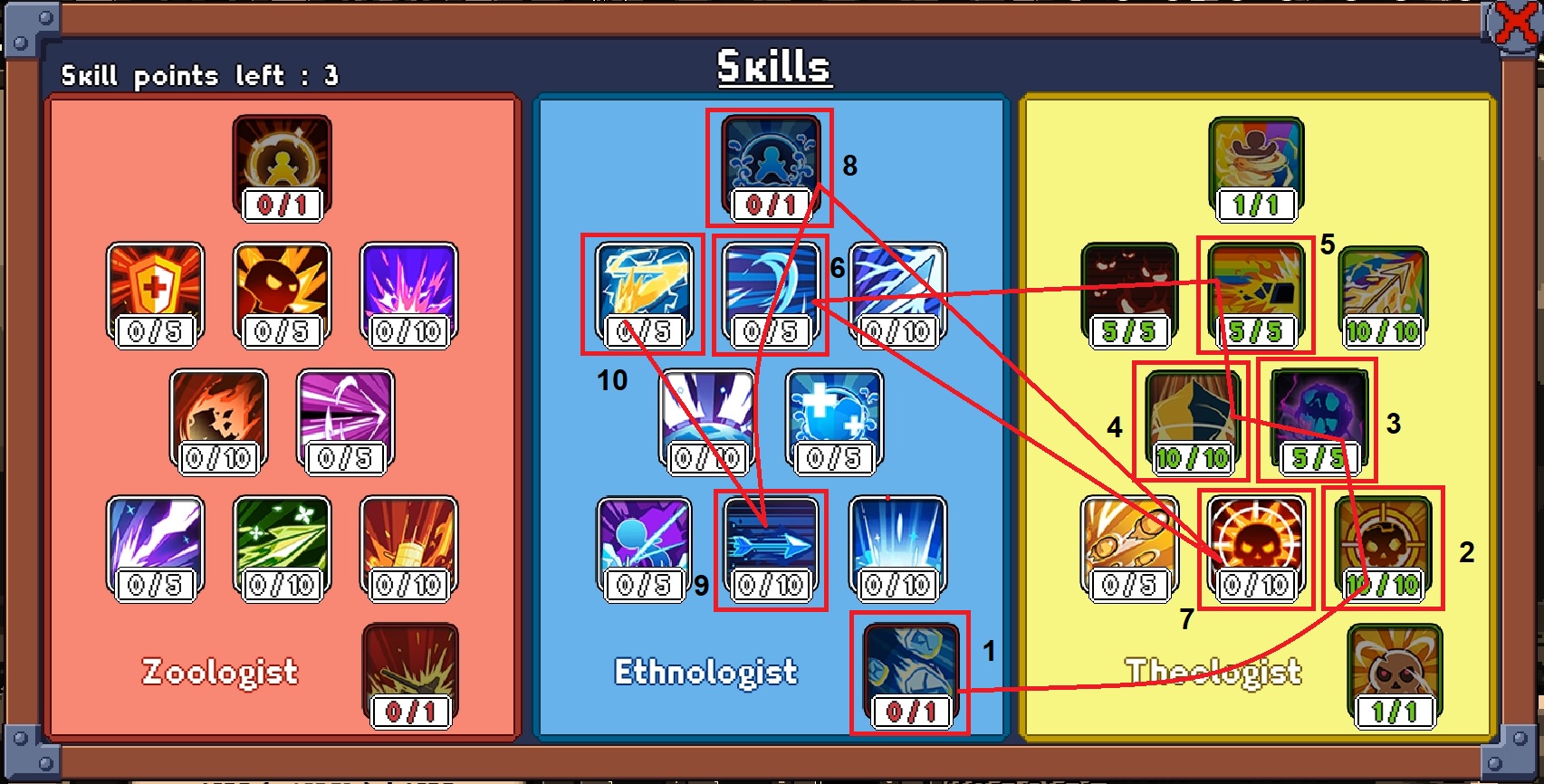 
Last but not least of the progression-type achievements is collecting 100k gold. All you need to know is that this will take multiple runs. Beating the game at higher difficulties will net you more gold (up to 150% more due to 5x Tower Tarot cards activated).

Have a legendary item equipped in every slot.


Self-explanatory. There is a tarot card that upgrades gear to 1 tier up (like Purple to Gold) if needed. If you use the tarot card and the achievement didn’t trigger, simply swap a legendary piece out and repeat the process so the game processes the fact that you equipped it.

Generate a “Legendary” item through fusion.


This achievement is just a small bit of RNG combined with inventory management. Each new item pushes the top leftmost item out of the limited item space you are given. Just keep fusing as necessary. It will help a lot if you have the following:

The first two items are self-explanatory. The artefact is amazing, but not necessary. It will just make things go a lot more quickly by giving you a ton of items to fuse together. 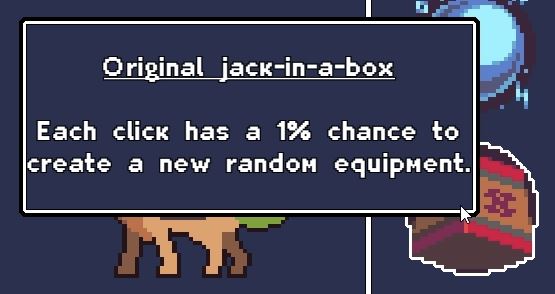 I got pretty lucky here, but you get the idea of how this artefact can benefit you.

Kill a boss less than 3 seconds after the fight begun.


You’ll get this without even trying. Use the Theologist crit build and activate Artefact+Studies+Jewel together to delete a boss in less than a second.

Pick “The moon” tarot card on the hardest difficulty, then beat the buffed enemy.


This works on any enemy within that difficulty. You can even kill one of the weakest enemies of the first area if you get lucky enough to spawn “The moon” tarot card that early.

Lose your money to the “Hanged Woman” tarot cards, then beat up a boss to take it back!


Straightforward achievement. This Tarot card will rob you of your gold and you just have to kill the boss that comes next to nab this achievement and yoink your gold back.

No tears, only dreams now

Inflict at least 3 status effects to the enemy (Frozen/Poisoned/Confused/Slowed).


Artefacts have 3 of the 4 status effects that you need. The last one (Poison) is from the Zoologist tree.

… They made me come back!

Die and revive 3 times in a single run.


Where to get 3 revives:

Each time you have one revive, get yourself killed. That’s how I got the achievement.

This thread mentions that the revives might not work if you stack more than one. – [steamcommunity.com]


As mentioned in this steam discussion thread – [steamcommunity.com] , artefacts and tarot cards will get you this achievement.


You’ll be able to hit this hard around the 90th (area) level. Same rules apply when trying to beat the hardest difficulty. The goal is to balance 100% crit rate and build up your base click damage and multiplier.

It’s a bit hard to see because of the overlapping numbers, but that’s a 3 million critical hit using the megacrit (5x) from the Theology tree.


To automate an item, right click on it to see the various options available to you. You can only automate one item UNLESS you max out the Museum a*sistants skill under the Ethnologist tree. After getting this skill to max, just set an automation command on all skills for the achievement.

Max out every single skill of a skill tree.


To clarify, it has to be the full tree from one of the 3 paths you can take. You should have enough skill points if you equip exp gain gear early on. Additionally, there are Research cards and Tarot cards that give you even more skill points.

Generate more than 50,000 autoclicks in a single run.


If you want to avoid carpal tunnel, hold down LMB and the game will click for you. It’s not very fast but it’s something at least. After beating the game once, you’ll unlock an auto-click and 2x speed option. Ticking this option is almost as fast as setting an auto-clicker at 50ms/click.

Preparation is the key to success


You will naturally unlock the 6 usable items through research and gaining character levels in your run. I got this on my 2nd playthrough after selecting the Ethnology tree as my first skill (Powder).

Heal 1000 HP through artefacts in a single run.


The fairy mentioned in the achievement below is one of the artefacts that can get you this achievement. I’m not sure if you need to take damage for the healing to count BUT using the item “Jewel” (#6 in the item bar) can sometimes multiply your HP and it will look like you’re damaged. Just keep playing with healing artefacts and this will trigger during the run in no time.

Me and this army


Straightforward achievement. If you had bad RNG getting more than 2 to show up in one run, you’ll be happy to know that completing and unlocking research with gold can give you artefact rerolls (up to 3 rerolls per run). This should help you get the achievement.

Pick the “Gag gift” artefact while you already have five or more artefacts equipped.


I suggest doing this after you’ve beaten the game on the hardest difficulty. The randomized artefacts resulting from taking “Gag gift” can really mess you up if you were aiming to complete the run. I ended up with the “Demon Eye” artefact (0% crit chance) while running the Theologist crit skill tree. 0% crit chance while running a crit build made my run more tedious than it needed to be.

Equip every artefact at least once.


This will probably be your last or second last achievement if you’re like me and waited until beating the hardest difficulty to collect them all. After beating each boss, you’ll get a list of 3 artefacts. The game lets you know which artefacts have been collected (or not) as indicated by the ✅/❌.

Even with rerolls, it took about 3~4 runs on top of hard mode to find all the artefacts.

This is all we can share for Full Achievements Guide – My life as an archeologist for today. I hope you enjoy the guide! If you have anything to add to this guide or we forget something please let us know via comment! We check each comment! Don’t forget to check SteamClue.com for MORE!