This guide will explain how to get all the achievements in Ryse: Son of Rome with the occasional help of some screenshots and a video or two.

You will receive these achievements for simply playing the game.


To Protect And To Serve


Give Caesar What Is His

Purchase And Use An Upgrade In Combat.


I Have A Story To Tell

Complete The Beginning On Any Difficulty.

Find Your Mother And Sister.


I Will Avenge You, Father

Complete S.P.Q.R. On Any Difficulty.

Complete Trial By Fire On Any Difficulty.

Complete The King On Any Difficulty.


The Bigger They Are …

Complete Edge Of The World On Any Difficulty.

Find Out What Really Happened To Your Parents.


Siege Me If You Can

Complete Pax Romanum On Any Difficulty.

Become The Righteous Hand Of Vengeance.


Never Give Up, Never Surrender

Complete The Wrath Of Nemesis On Any Difficulty.


Not My Type After All

Complete The Son Of Rome On Any Difficulty.

Complete The Game on Any Difficulty.


My Empire Of Dirt

Complete The Game On Soldier Difficulty.


Bad To The Bone

Complete The Game On Centurion Difficulty.


These achievements stack, so by playing on Centurion difficulty you will get all three by the end of story mode.


When it comes to Legendary difficulty, it is unavailable at the start of the game. You need to complete all chapters on Centurion difficulty to unlock this mode.


Enemies hit harder, you have less HP and HP regen, you need to do perfect executions, the timing for parries is very precise,and there are no red glowing indicators when evading heavy attacks, so beware before trying thinking it’s going to be a cake walk. It is not. Thankfully you don’t restart the whole chapter when you die, just from the recent checkpoint.


Some people report that they do not get achievements for completing levels when starting a New Game. If that’s your case, pick chapter one from the chapter selection screen and select Legendary.


I Have A Story To Tell (Legendary)

Complete The Beginning On Legendary Difficulty.

I Will Avenge You, Father (Legendary)

Complete The King On Legendary Difficulty.

Complete Edge Of The World Legendary Any Difficulty.

Siege Me If You Can (Legendary)

Complete The Wrath of Nemesis On Legendary Difficulty.

Complete The Son Of Rome On Legendary Difficulty.

Perform 100 Executions In Any Game Mode.


Comboing My Way Through

Defeat 10 Enemies In A Row Without Sustaining Any Damage.

Defeat 25 Enemies In A Row Without Sustaining Damage.


These can be done on any difficulty, including easy. If you are having problems with finding 25 enemies in story mode, try to play a solo multiplayer match. (atm not sure if the timer resets in single player between battles, will test it)


You need to put two enemies in execution range and, for the best chances of it registering, have them in from of you before you press RT.

Use An Execution To Set Fire To An Enemy.


Execute an enemy near a fire and you should get the unique execution. I personally unlocked this by accident in chapter six shortly after the defence on the walls. 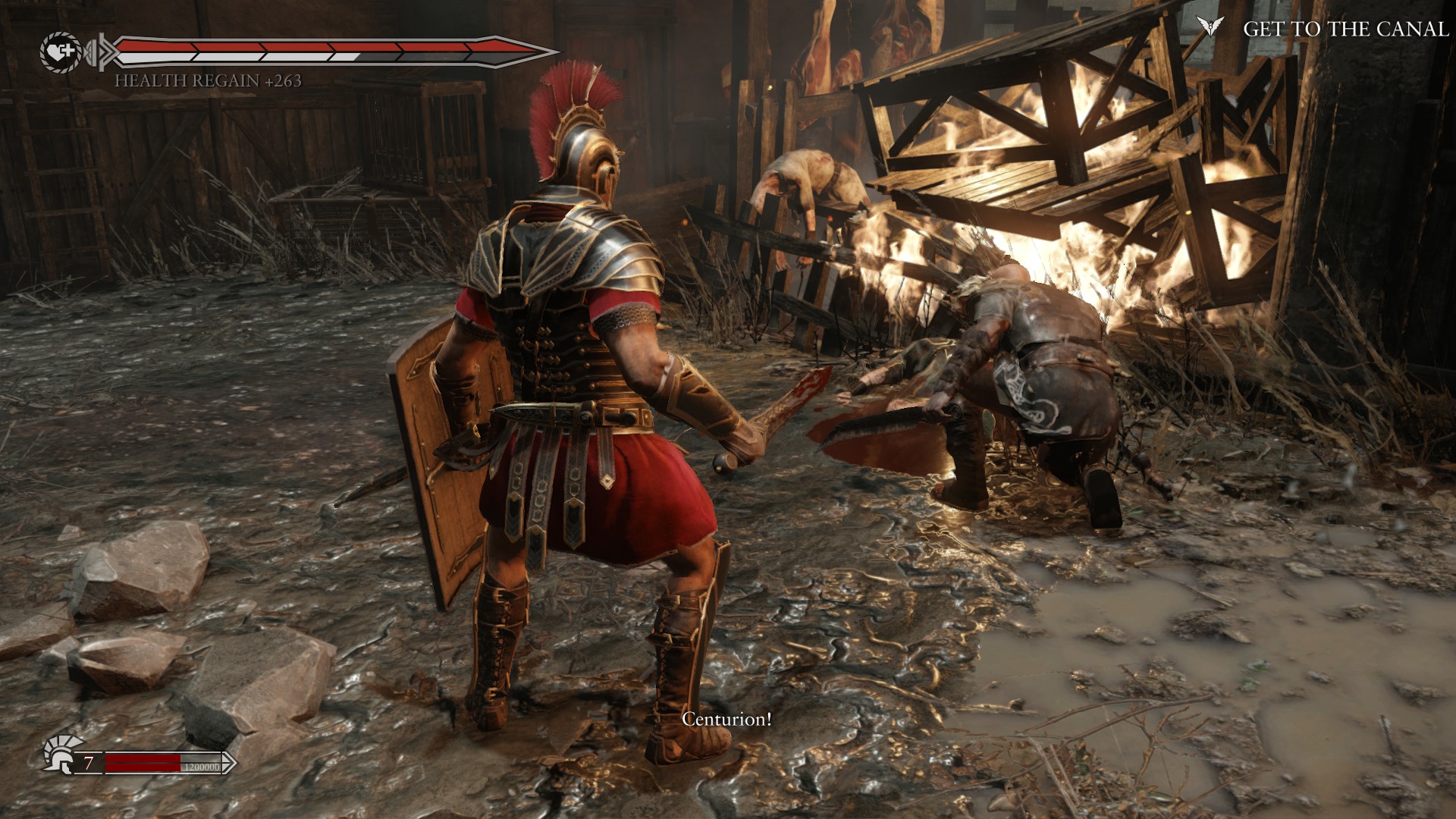 Here is another way to get this in chapter five:

Use A Trap To Kill An Enemy.


This can be done in either single player or multiplayer, but multiplayer is the easier way. Wait for and enemy to get near a spiked trap, set off the trap and hope the enemy dies from it.

Been There, Done That


You can get it as soon as you finish chapter one. Simply go into chapter select, pick chapter one again and when the level loads, achievement will pop.


There’s No Such Thing As Luck

Kill An Enemy By Perfectly Deflecting An Arrow.


You can get it in chapter three when the game teaches you about deflecting. Just stand still and spam deflect until the achievement unlocks. 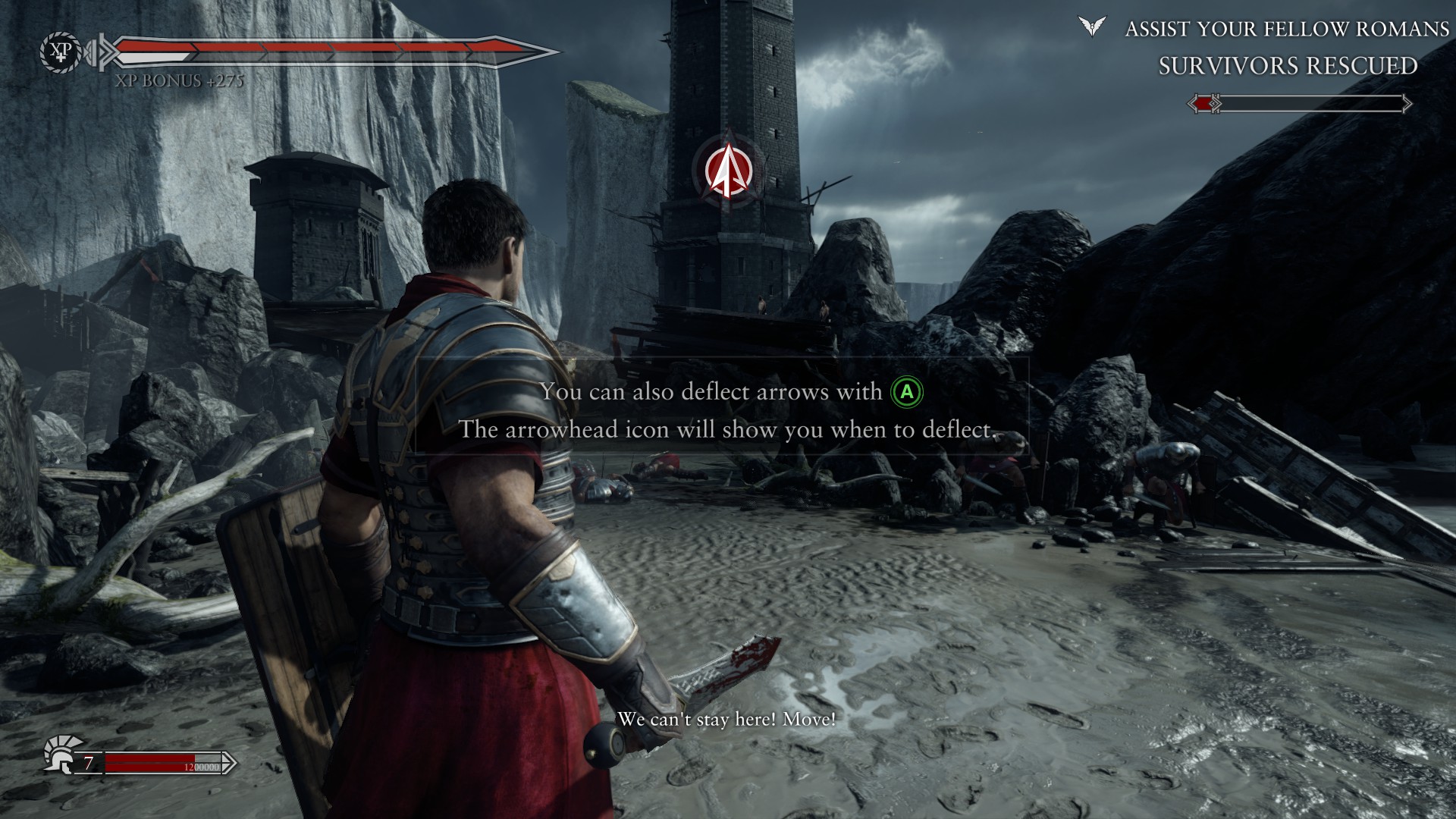 Get In Combat With All Executions And Upgrades Purchased.


You need all Hero and Execution upgrades. Replay chapters, use the xp gain bonus for executions and get a high multiplier to get the most points the fastest. All upgrades unlock for purchase by level 7 and you’ll need around 2 million xp for everything. When you do unlock everything, load up any chapter and the achievement should unlock.

Letters From The Front


The first scroll in the game is in chapter one. After learning about executions, you will climb up a wooden scaffolding. Simply turn left and the corpse will hold the scroll. 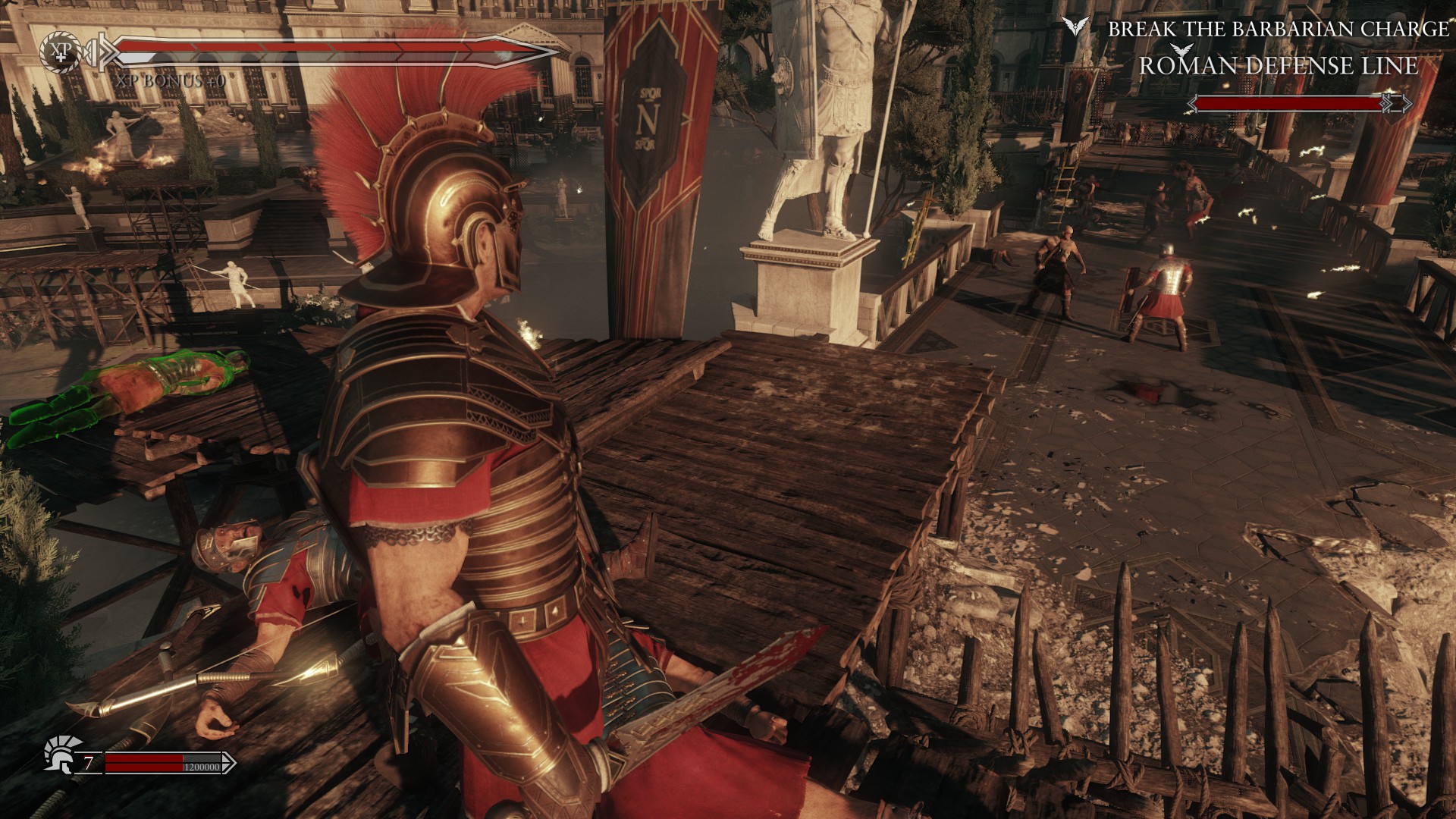 
The first vista is in chapter one. After holding off the barbarian attack, but before entering the palace, look left and there will be a shield with your first vista.

Something I Found On The Way To The Forum 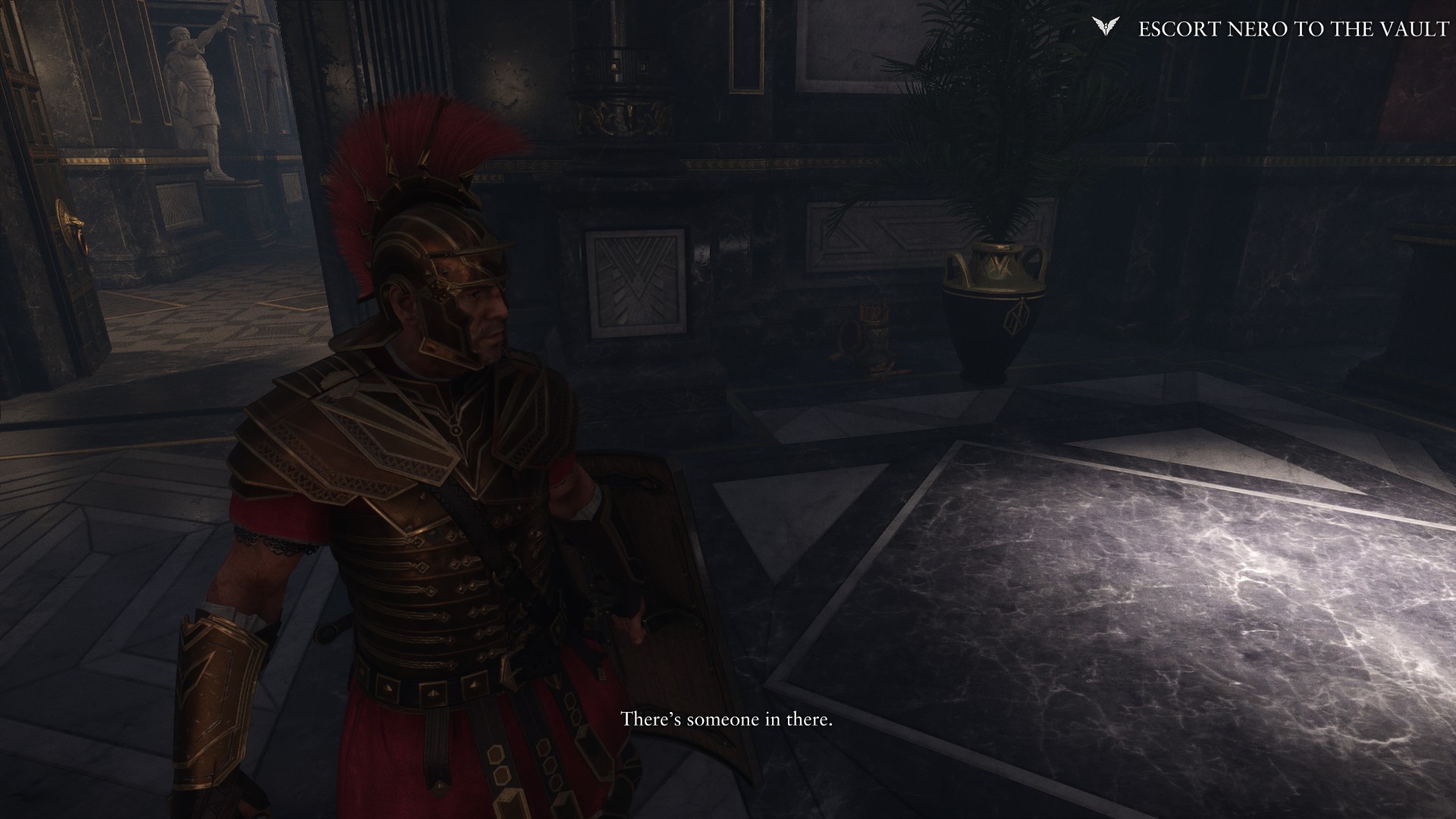 Complete A Comic Book By Collecting 6 Chronicles In A Level.


Pick up all chronicles in a single chapter (outside of chapters one and two). If you’re hunting for collectables, this should unlock by its own.

Collect All The Scrolls.

Collect All The Vistas.

Collect All The Chronicles.


Campaign = match. Play an online or solo multiplayer game, win or lose you will get these achievements.


Either play a match with a random player or a friend. Simply press the execution button at the same time as your coop partner. With randoms it can be tricky, but it’s fairly doable.


When your coop partner goes down, stand next to them and press A. This achievement is culminative and doesn’t have to be done in a single match.


Grace Of The Gods

Unlock The First Reward Of The Gods.


Champion Of The Gods

Unlock All The Rewards Of The Gods.


When you start a multiplayer game you will pick a god that gives your various bonuses. Once you play enough rounds with the same god (doesn’t have to be in a row), you’ll unlock your reward. It’s best to pick the same god each match. You can check your progress by looking at the red bar under the “Reward:” icon. When you unlock one reward, pick another god and repeat this until you unlock all four.


Best Of The Best


Master Of The Colosseum

Fight On Each Multiplayer Arena Environment.


You need to play (not win) on each of the base game maps:


AFAIK other maps do not count, as they were part of the DLCs. If that’s not the case, leave a comment and I’ll update the description.


This Is My Island


A Walk In The Park


Do these in arena with a coop partner, not solo. On Island use executions near the water, and on Forbidden Forest near the spiked wall to send the enemies flying for an enviromental kill.

Play A Round Of Survival Mode.

Play A Round Of Survival On Island.


Pick the map Island and survivor mode in custom match or hope you get lucky in quick match. Win or lose you will unlock this.


Oh, Let Me Have A Little Bit Of Peril?


Pick the map Dockyard and survivor mode in custom match or hope you get lucky in quick match. Survive for at least seven minutes, after that you can die and the achievement will unlock.


You Were In Terrible Peril


Pick the map Courtyard and survivor mode in custom match or hope you get lucky in quick match. Survive for at least seven minutes, after that you can die and the achievement will unlock.


No, It’s Too Perilous


Pick the map Firestorm and survivor mode in custom match or hope you get lucky in quick match. Survive for at least seven minutes, after that you can die and the achievement will unlock.


Uh, He’s Already Got One, You See


You Shall Put No Other Gods Before Me!


Build A Bridge Out Of Her


Open the multiplayer tab, go to custom match, solo, then pick your corresponding map. You need to win for the achievements to unlock.


Get 400 coins from playing multiplayer, buy a silver booster pack for a guaranteed rare item and then equip it. Go into a multiplayer match and the achievement should unlock then.


Say Hello To My Little Friend!


You must buy corresponding tier booster packs to get the necessary items. The achievement booster packs require you to be Rank 5/90/130, respectively. Once you equip your item, go into a multiplayer match and your achievement should unlock.

Thanks to 360GameTV – [youtube.com]  for the fantastic Legendary walkthrough as well as for the detailed collectables video.


Thanks to Markyshizzle – [youtube.com]  for the rather necessary guide for quick XP leveling in multiplayer.


Please leave a comment if you found any errors in this guide, I’ll try to fix it ASAP.

Here we come to an end for the Full Achievements Guide – Ryse: Son of Rome guide. I hope this guide has helped you with your gameplay. If you have something to add to this guide or believe we forgot some information to add, please let us know via comment! We check each comment manually by approving them!