Guide to the current version of September 2020

Check all the sparkling inventory of the house.

You can heal the party if you eat something from the board next to the bed.

You start the “Tutorial” and the “Crafting: First Steps” synthesis quest.

The Traveller Crystals will heal the party.


In the Tavern “Flame Guard”, check all sparkling inventory (as far as possible).

Talk to Bresk and send him to the Desert Ruins.

A little translation for those who don’t know German (Gertrude):

“Such cool and refreshing beer!

Even the meat loaf and cabbage here have an excellent taste!

But do I have to pay for a glass of water…?”


Enter the shop and buy the Recipe for Fyrea’s Armor (+1) for the quest and the recipe for Healing Potion (S) with the rest of your money.

Another tutorial and unlocking of Arte and Ability Page.

New Ability Pages will unlock once an Arte levels up.


Fight the mobs to obtain crafting materials and money to learn either artes or buy new recipes.

You need some translator item to read the inscription of the monument.

Collectable items will respawn when you change map (another source of income).

You won’t be healed when level up, so return to the Traveller Crystal or home to heal.

Don’t forget to save, as the monsters will level up with you (mob level is average level of the party).

You can climp over the roots to reach other levels of the terrain.

For the time being you can only go west.


Note: As long as you have only Fyrea, buy the Recipe for Striped Leather Gloves, as she can equip them.

Path of the Guardian

To the Burning Cave

Before you proceed, have bought the best LP/EP regenerative Accessories, best weapons and learned more abilities.

Also have all basic reciepes and try to craft them at least once.


Heal at the Traveller Crystal.

When you touch the blue magic circle, you can take a bath.

To go ashore, touch the circle again or one of the blue flowers.

You can walk up north to the temple and get a Crystal of Essence, read a message and find another Traveller Crystal.

Go down again and then take the small path to the east.


The Flaming Willowwisps have a higher fire resistance and cannot burn but can steal your EP.

With Luck (or not) you might encounter a Fierce Monster.

If you trigger another encounter, you have to leave the map first so that it can respawn. 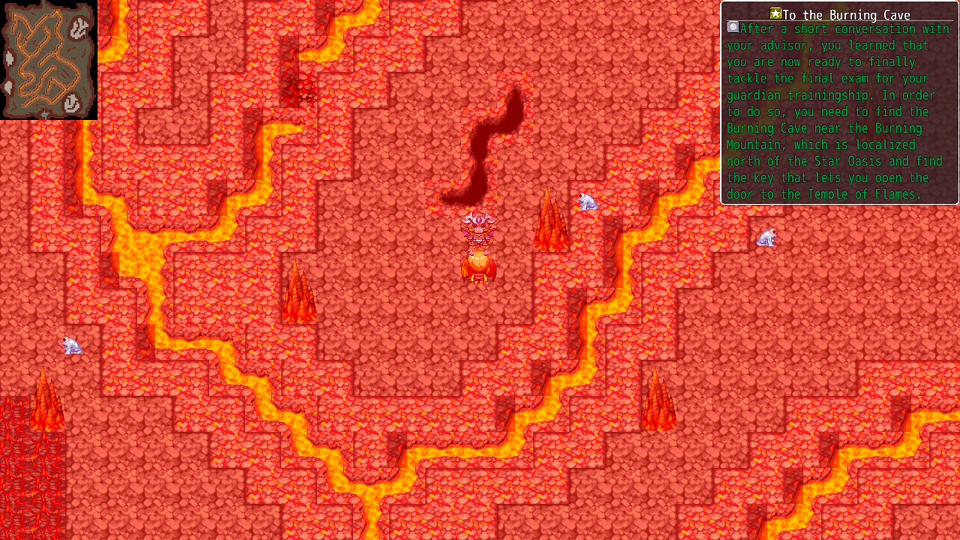 
Proceed to F2 and read the stone plates.

Prepare at the Traveller Crystal.


Boss Flaming Minotaur: Use this change to try out your defensive and supporting skills as well as some skills that you haven’t used yet. Stun can be a nuisance. Drops Orb of Life.


F2: Set the Flame Orb A onto the left pedestal and heal up.

Equip the Flame Jewel as a shield!


F2: Set the Flame Orb B onto the middle pedestal.


Trial Room 3 (north): Thanks to the Flame Jewel you will be protected from ground damage.

Find you way and the intersection near the chest to the north to the west.


F2: Save and put the last Flame Orb C onto the right pedestal.

Use the Teleporter to the Final Room and obtain the Temple (Entry) Key.


Note: You will only finish the “Crafting: First Steps” sythesis quest when you enter/leave the Flayk Shop with the requested armor equipped.

Craft and equip 1 of those daggers.

The Temple of Flames

Step onto the magic circles.


Right at the Entrance is another Traveller Crystal.

There are paths to the East, North and West.


Western Path: Read the stone plate for the riddle.


Western Path 2: In case you are muted, use normal attacks but still defeat the spiders first!

For the further process you need a key.


Eastern Path: Read the stone plate and insert the Draconic Eyes into the Dragon Statues.

Find the image next to a Dragon Statue (snake).


Northern Path 2 (East): Find the Key and the image (turtle).


Boss Flaming Gargoyle: Remember to use this change to grind some of your unused Artes. Drops Orb of Life and “Unique: Licking Wounds” (Arte for Fyrea).


Return to Eastern Path and insert the last Draconic Eye to solve the riddle and obtain the Temple Key A (chest on the empty dragon floor tile).


Return to the Northern Path (West) and unlock the gate.

Unlock the next gates.


Return to the Western Path and solve the riddles.


Entrance: Set the found Key Items onto the pedestals.


Guardian’s Trial Room: You can still recover at the Traveller Crystal.

Crafting of an unique Weapon

There are 2 people standing at some pillars, so talk to them.

Time to get some rest

The people are gone now.

Go home and then to the table.

Where could he be?

Talk to Ak’eta (near the solitary house),

Koka’ru is near the main path to the shop.

Talk to him and unlock the Side and Bounty Quests.

You can find the Blackboard in the Tavern (sword).

Get the time by

Flayk – Side Quests and Bounty Quests

Bounty quest will give a message when completed and can be finished in each tavern.

The Eastern Desert is unlocked.

Discover some places! I & II


When you step on the red magic circle you can witness a scene with those two visitors from earlier and you start the next main quest. 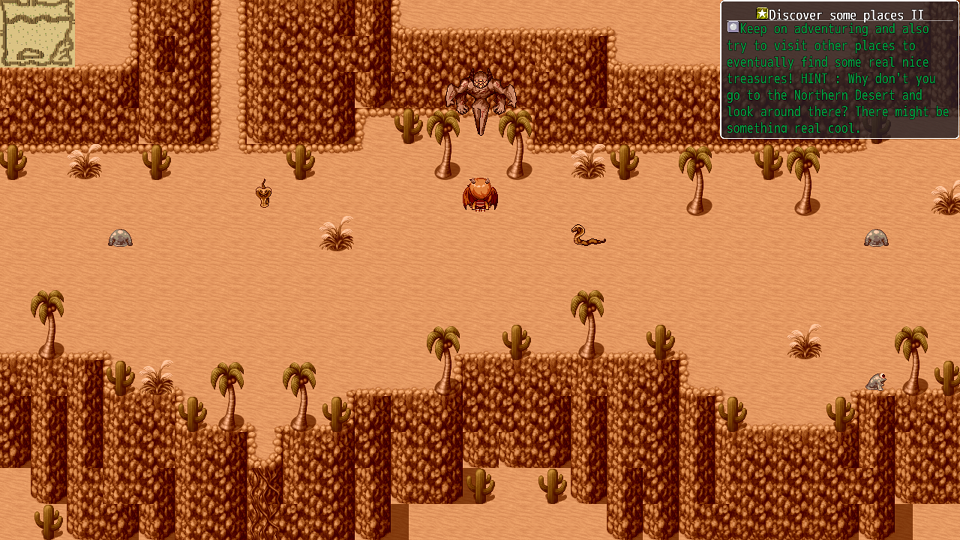 
The door is locked, but you can recover at the Traveller Crystal.


You can recover at the Traveller Crystal.

But you cannot enter the Desert Ruin yet.


You can recover at a Traveller Crystal.

Get her a Water Bottle at the Star Oasis (green magic circle).


Boss Desert Orcanu: a stronger variant that can stun.


You return to Flayk with your saved new friend and Limare wil join your party with level 21 (?).

Here we come to an end for the Full Guide – Daraney – Guardian’s Rise guide. I hope this guide has helped you with your gameplay. If you have something to add to this guide or believe we forgot some information to add, please let us know via comment! We check each comment manually by approving them!