Have you glanced at the highscore table and wonder how some people obtain scores orders of magnitude higher than you? Are you perhaps looking for an extra layer of depth to a game with a frankly already ridiculous scope? Or maybe the default paint-the-map type gameplay is a little too pa*sive for you and you want to spice it up. Either way, look no further!

How are scores calculated?

if you click on the score of any completed town, a screen pops up showing you exactly how the score for a town is calculated. It looks like this: 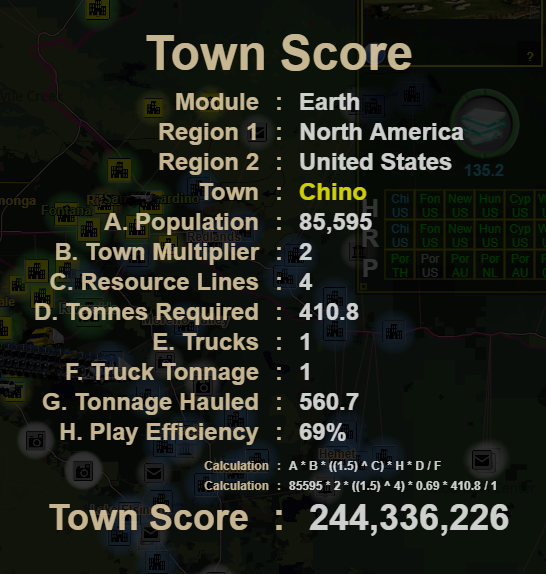 Let’s take a look at each of these factors, and see how it relates to the score.

Now let’s see what this means for us. The single most important factor for high scores is the amount of different demands due to its exponential nature. Other than that, towns requiring a higher tonnage and with bigger populations give a higher score.


Of these factors, there are only two that the player can directly influence: the truck tonnage and the efficiency. So obtaining the highest possible score will consist of using as few trucks as possible, without losing too much efficiency and making the town impossible.


Because every factor in the score formula is either multiplicative or exponential, the score can grow incredibly high for the right towns. With optimal play, a tiny village requiring 3 tons of one good might only give 100k score, while a major city with 10 demands of thousands of tons can give hundreds of billions of score. This means that probably over 90% of your score will come from only a handful of towns. If you are just aiming for a spot on the overall leaderboards, you can probably get away with simply optimizing these high potential towns.

Before you can start to achieve high scores, you will need to do a lot of preparation – and I mean A LOT. You will effectively need to unlock access to most depots and every industry – a process which can take hundreds of hours in Earth. And during this unlocking process you can’t actually score attack too many towns, as you often won’t have access to the industries required to finish nearby towns so you can use them as a storage hub. The rest of this guide will therefore a*sume that you have repaired every road (9876 in total) and upgraded every industry to level 3 (590 in total).

All the roads and industries done! Now I can finally play the game!


During the unlocking process, you will need to complete a fair amount of towns to complete contracts. You often will not be able to get the optimal score from these towns. I personally wouldn’t worry about them too much, they are only a handful in the grand scheme of things, but you can still try to do somewhat well on them with the resources you have.


First of all, you will need a fleet of small trucks capable of tackling big cities. You might think it’s impossible to complete a big city that needs thousands of tons with anything other than a large amount of big trucks. however, the key realization is that the loading and unloading speed is the same for every truck, regardless of size. That means that as the travel distance approaches 0, tiny one-ton trucks will start to perform almost equally as good as big 40-ton trucks. Sure, they can only carry 1t at a time, but they deliver it so quickly that they can deliver 30-40 loads in the time it takes a 40-ton truck to deliver a single load. it also means that smaller is always better: 20 one-ton trucks will perform better than one 20-ton truck.


In Earth, the smallest available trucks are 0.25t tuk-tuks, but their average speed is a lot lower than that of other trucks, and you can only buy 5 of them ever. That isn’t really enough to properly score attack on the major cities, but they can definitely help you eke out a number one spot in some smaller island countries. One-ton trucks however are readily available at most depots, and are powerful enough to finish even major cities.


One-ton trucks are available from the following truck depots:

Trucks from all of these locations can be equipped with floaties and ocean floaties (at the depot in Japan), so they can be used anywhere. You can also purchase one-ton trucks from the depot on Martinique, but they cannot leave the island so they are useless after the tutorial phase.


This gives you a total of 35 potential one-ton trucks. 20 is actually enough to complete almost all of even the biggest cities, believe it or not, but you might want some more to make those a bit less tedious. Of course, prioritize the 2x boosted depots as those trucks will be faster and have a higher efficiency. You will also need a fleet of bigger trucks to finish businesses and build industries. I use 13 40-ton trucks for that, but you can easily get some more from various depots, once you have enough slots unlocked.


Next, all of your trucks will need the following boosts: 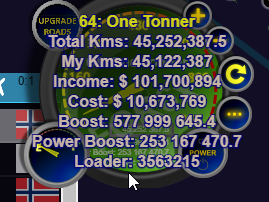 Should be enough for a while…


With all that in place, I like to send all of my trucks on a long route to test which is the fastest. There is actually quite a big variance in speed between trucks, even if they are brand-new and have the same boosts. Have them start in the same location and send them somewhere far away, and as they get close to the destination, pause the game and see in what order they will arrive. Then reorder your vehicle list from fast to slow. This way you can easily use your fastest truck to finish most locations. 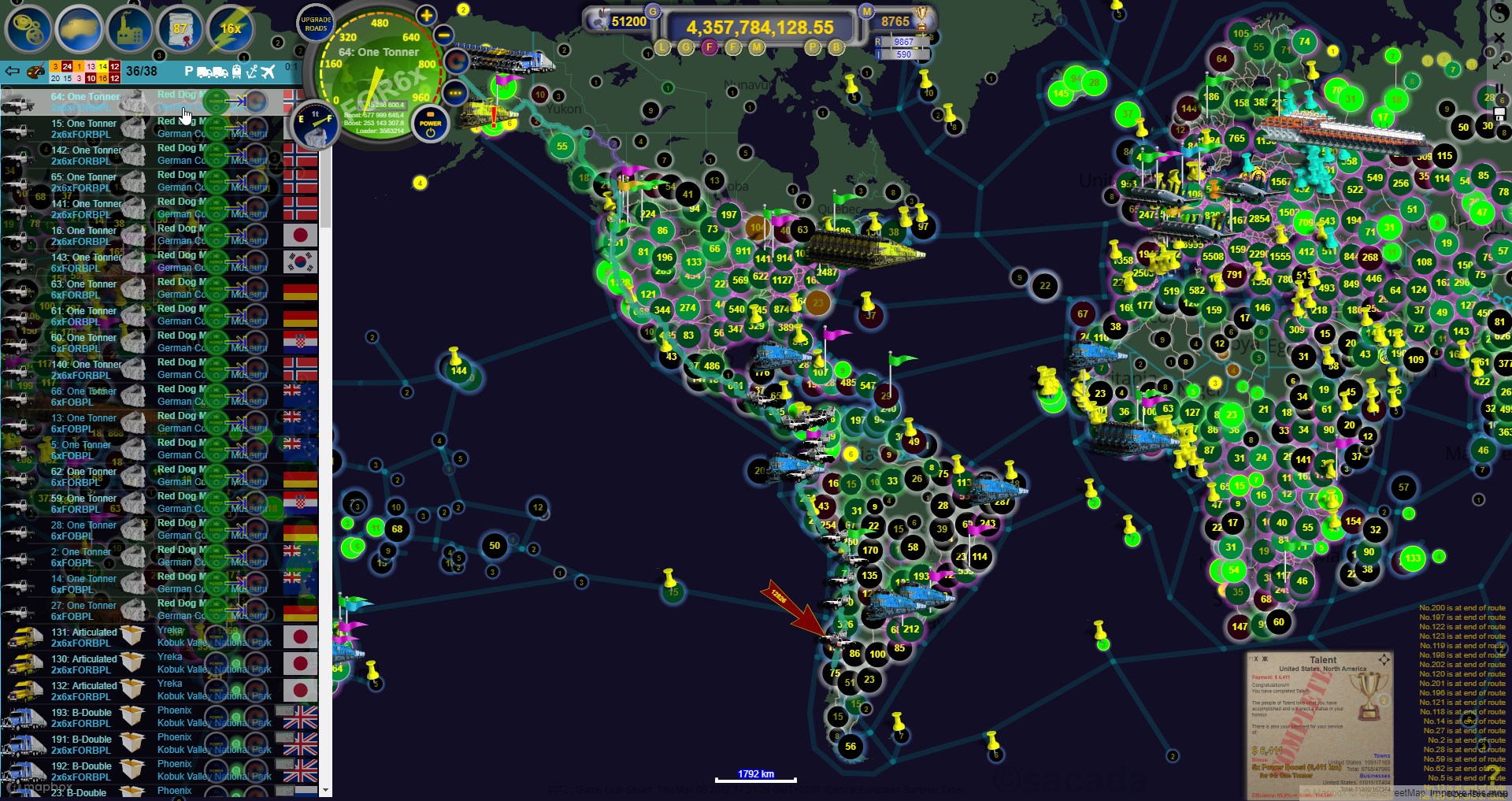 Over a large distance, the variance in speed is easy to see. The fastest trucks are almost twice as fast as the slowest ones!


If you really want to optimize things, I suppose you could even sell off your slower trucks and purchase new ones to try and get a faster fleet overall, but that’s something I have personally never bothered with.

When your fleet is ready and you have unlocked every industry, you can finally begin completing countries to get on top of the leaderboards. The basic process of completing towns will look somewhat like this:

This is what you do it for! Was it worth it? Probably not…

Various (micro-)optimizations and other notes

There are a lot of optimizations you can make to squeeze out even more score. Some have a huge impact, others are almost unnoticeable. Here is a list of some of them.

Here we come to an end for the Getting on top of the Highscores – LOGistICAL: Earth guide. I hope this guide has helped you with your gameplay. If you have something to add to this guide or believe we forgot some information to add, please let us know via comment! We check each comment manually by approving them!