“An unknown Alien Race has just launched a failed attack on Earth Station Alpha, and are regrouping near Mars! The Station was able to drive this wave off–however sensors indicate several enemy fleets entering the system. Earth Station Alpha cannot defend itself against all enemy ships at one time!”


“Its up to you, now. Fight off the incoming fleets, discover where their ships are being constructed, and launch an assault that will put an end to their attacks once and for all! If Earth Station Alpha is destroyed, the planet will be lost and humanity exterminated.”

Colored Orbs of Power to recharge your systems

JUMPERS: Teleports to opposite side of the screen when at screen edge.


SHIFTERS: Temporarily phases out, absorbing shots but taking no damage.


BOMBERS: Circles above while firing rapidly.


STRAIFERS: Flies quickly from side-to-side, promising no escape from their attacks.

On your course from Earth to the Alien Homeworld, you will pass through

Your standard debris field, made up of bits of planets which were never meant to be. They are rich in Energy, and sometimes hold hidden stashes of Alien Tech. Navigate carefully because running into too many of these will do significant damage to your shields!

These unmanned Weapon Platforms are not to be taken lightly. Unshielded, but equipped with the Alien Phasing Technology as well as an assortment of weaponry, these structures mean business!

These debris fields hold more than inactive Alien Tech–some are armed and ready to put an end to your mission! Do you have the skills required to evade the passing debris as well as weapon fire? 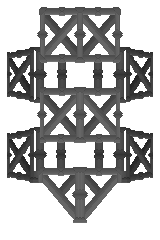 This is it! This is the moment you have trained for, and the final goal of your mission.


Eight Shipyards lie before you, heavily shielded and each building one of the ship types you have previously encountered.


This is the source of the attack fleets and it must be crushed swiftly! Do NOT give them a chance to mount a defense, or you will have a bad time.


Once the Shipyards and all Enemy targets have been removed from the system, your victory is complete!

This is all we can share for Getting Started: General Information and how to get started playing – Ultimate Starfighter for today. I hope you enjoy the guide! If you have anything to add to this guide or we forget something please let us know via comment! We check each comment! Don’t forget to check SteamClue.com for MORE!