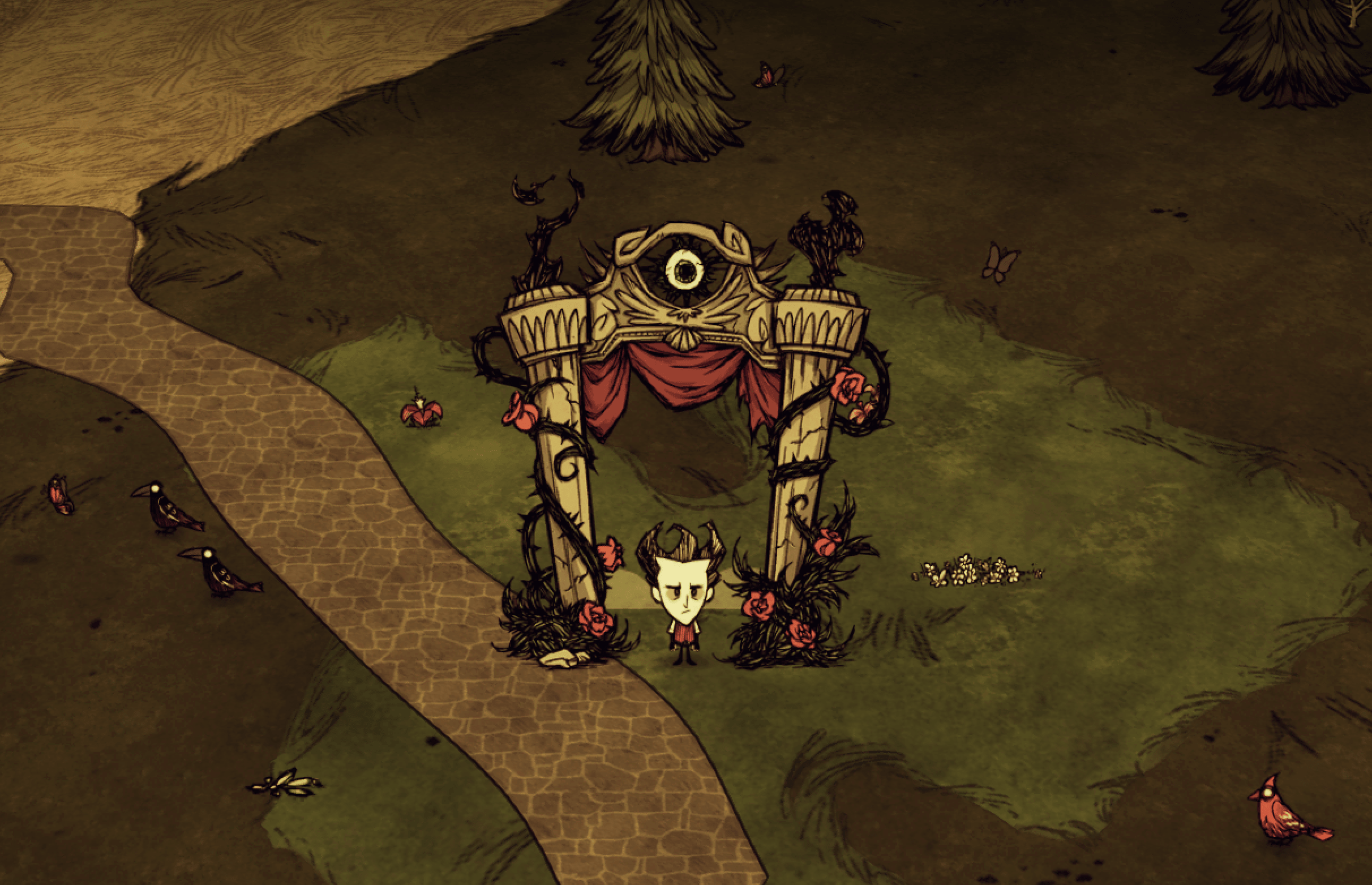 In Don’t Starve Together you must build items not only to catch prey to eat, but to ensure your own survival beyond satiating hunger.


Solution: Finding materials is an important part of the game. From gra*s to rocks, you’re going to need many different resources to build what you need. We suggest not only finding items, but gathering as much as possible that you can stack. Your inventory space will be limited, so make sure to only take the resources that you need.

In order to gather some resources (such as wood), you need more intricate tools.


Solution: With the materials you gathered, craft tools as soon as possible. Know that the tools will break over time, but the items will tell you what percentage of durability they have.

Time of day (and light) is a very important feature in the ‘Don’t Starve’ universe. The later it gets, the darker it becomes. You never want to be left in total darkness as it will drain your sanity and harm you.


Solution: Keep track of the time of day, which is shown in the top right corner of the screen. The closer it gets to night, the more you should concern yourself with finding a source of light to keep with you during the night.

Keep track of your sanity, health, and hunger.

Though the game is called ‘Don’t Starve Together,’ there are different ways to die beyond starvation.


Solution: To continue your streak of survival, you’re going to want to continuously check the gauges of your health, hunger, and sanity. Your health is the most important, with hunger affecting it directly. Sanity is also important, though, as low sanity can cause shadow enemies to spawn which will damage you in combat.

Over time, your sanity will drain, even when taking care to not encounter monsters and find sources of light during nighttime. Loss of sanity can be a slippery slope to death in ‘Don’t Starve Together.’


Solution: Picking flowers will give a nice boost to your sanity, as every flower will restore a fragment of your sanity. With enough flowers you can craft a garland which helps aid in events that drain your sanity so that they have a lesser effect.

There are a plethora of different materials in ‘Don’t Starve Together,’ but gold is incredibly important and valuable. To progress in the game, it’s necessary to find gold to build more complex structures.


Solution: There are different biomes in the game, two of which are important for this step. Both rockyland and desert areas can be home to many rocks (rockyland more so). If you’re in an area bountiful with boulders, search for those with a gold vein and be sure to collect as many gold nuggets as possible!

Find a location for your base.


Solution: Finding a good spot can be a little tricky, but we recommend either building your base near sources of gold, beefalo, or the Florid Postern. Gold is necessary for building important structures, such as the science machine itself. Gold doesn’t respawn however, which is why beefalos are another great idea- their manure being useful with farms ! Even beefalo have drawbacks, unfortunately, as they become aggressive during mating season. If respawn is an option, building near the Florid Postern (the respawn point) is a great idea.

Camp fires take 2x wood as well as 3x cut gra*s to create, then need added wood to continue to burn. This may not seem like much, but over time it will drain your supply of gra*s.


Solution: Firepit creation takes a fair amount of stones, but once created your pit is always there. To rekindle the fire in it, you only need toss flammable material into it.

As discussed earlier, spaces in your inventory are limited. Because of this, we suggest building a backpack.


Solution: Backpacks don’t add many more spaces to your inventory, but any extra space is good space. To create a backpack you’ll need a science machine as well as 4x gra*s and 4x twigs.

Even with a backpack, you still don’t have much storage space. Of course you’re going to need plenty of resources through the game to continue building your base. The more advancements you make in the game, the more tools you’ll have though, which means even less inventory space.

Scavenging for food can take a good chunk of time, which can be detrimental when you need to search long distance for items.


Solution: Building crops and traps can help you capture animals and grow vegetables that can be more filling. Traps you can build right away, but crops you need a science machine for. Furthermore, to make an advanced crop you’ll need an alchemy machine.

Even with traps and crops, your hunger may not be satiated. Never fear, there’s a way you can make filling meals without the need to eat countless carrots.

Around now, your character might hear howling from afar. There is a cycle in the game of hounds coming to hara*s you every 3 to 13 days. To defeat them you’re going to need some weapons.


Solution: Weapons and armor can be crafted early on in the game. We suggest starting with a spear, a melee weapon which you can make once you’ve created a science machine. It isn’t too powerful but is better than nothing at all. Another method is to look for skeletons in the game that have dropped weapons and armor which may be useful.

At this point, you may have excess crafting items strewn about. You might not have an organizational system at all to that either, and need wood to make planks but are unsure where to put your excess planks after.


Solution: Creating chests can help you organize your extra items instead of leaving them about. They only cost 3x plank and can be made as soon as you make your science machine. They have 9 slots each for storage.

It may be alluring to gather many different resources at once, but your inventory will fill quickly with all the different items gathered- especially given with all the tools you have in your pockets.


Solution: It’s recommended that you chunk gather rather than gather a multitude of resources at a time. Chunk gathering is where you focus on the resources needed for one item and gather many more times the resources for it than you need. Other items are bound to need those resources too, leaving them for use in the future!

Some items need resources which only drop from mobs. Now that you have some weapons and armor, however, you see no reason you can’t gather those items yourself.


Solution: Go out and find them! Some mobs aren’t initially hostile given the species of your character. Even if you don’t feel comfortable with attacking and killing just yet, knowing where these mobs are can help when you do.

Recipes from the science machine not cutting it anymore? It might be time for an upgrade!

The further you get into the game, the more difficult the enemies are going to get, especially with seasonal boss fights. Even with better armor and weapons, their attacks may be harder hitting than before.


Solution: Kiting is a technique in which you have enemies chasing you, then attack them in the short timeframe that they’re vulnerable. This is meant to save you from hits while also giving you a timeframe where you can safely attack them.

Have enemies fight each other.

It might be hard to time hits while kiting, or the enemies might be tedious to take care of at this point (such as hounds). A tip we gave earlier was to find mobs, and that might just come in handy for you now.


Solution: Mobs can and will fight other mobs, all you need to do is lead them to each other. Better yet, even if the mob is friendly (such as pig men), this can allow you the ability to gather materials you otherwise wouldn’t get from strictly friendly interactions thanks to your enemy killing off a few of the friendlies.

So far we’ve only spoken about science and alchemy, but there is another powerful force to be reckoned with- magic! Some of the most powerful items (such as the dark sword) come from science. Here’s how to get them.

Even with the best kiting techniques and armor, aggressive mobs still may get in a hit here or there. What is the best thing you could wear to help with this?


Solution: A football helmet reduces damage by 80%. If you followed our earlier advice with having mobs fight other mobs, you may have an extra pig skin or two laying around. With just a pigskin, rope, and an alchemy machine you can craft this item.

Some locations may be quite a distance away, and you may be weary of traveling at night with nothing other than a torch


Solution: Lanterns may be a bit intimidating to make- requiring 2x lightbulbs, 3x twigs, and 2x rope- but they last longer than torches as well as are refuelable. They come in handy while traversing across the map.

Explore the outline of the map.

Now you might feel very comfortable where you’re at with not much to do, or maybe the resources around you keep getting used and you find yourself searching for more. Sometimes searching is a necessity.


Solution: The map stores information of where you’ve traversed and the biomes present in those areas. By exploring the outline of the map, you won’t be wandering aimlessly in different directions and will get a rough idea of where to go for any given resource.

During different seasons, you can expect different weather patterns which will actually affect gameplay mechanics. To last as long as you can in game, you’re going to need to master the different seasons and the weather they bring.


Solution: Survival through seasons is more than just wearing weather appropriate clothing! There are also items such as the whirly fan and thermal stone which prevent overheating and freezing. Another technique to be mastered is overheating yourself (when the edges of the screen turn orange) before going out on a snowy day, making it take longer for the cold weather to affect you. The inverse is true with freezing yourself before a warm summer day!

Is your base simply what you need and nothing more? Are you tired of hounds coming and attacking your items that you must then rebuild? This tip is for you.


Solution: Fortifying your base is a very important step in the game as it ensures your base stays in pristine condition after boss fights. One thing we love to do is make walls with tooth traps outside of them. The mobs will have to break down the damaging tooth traps before getting to the wall which they must attack also.

Here we come to an end for the Guide – Don’t Starve Together guide. I hope this guide has helped you with your gameplay. If you have something to add to this guide or believe we forgot some information to add, please let us know via comment! We check each comment manually by approving them!