The last in this 3 part series, this section goes over the simpler items found within Geraldo’s Shop. 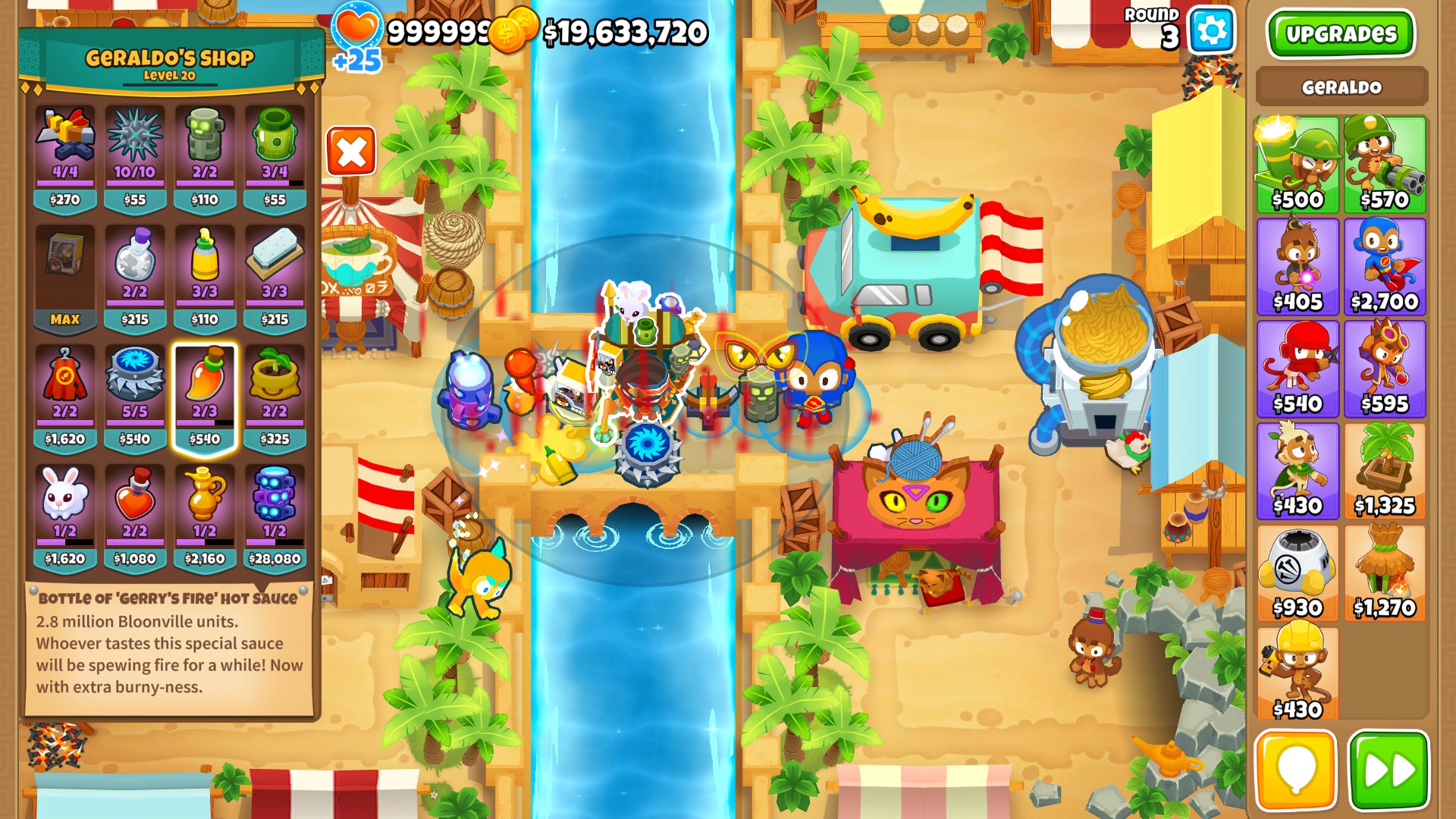 The shop of geraldo expands with level, in total there are 16 items. You can find a list of them below, and links to guides for the more complex items in the shop. 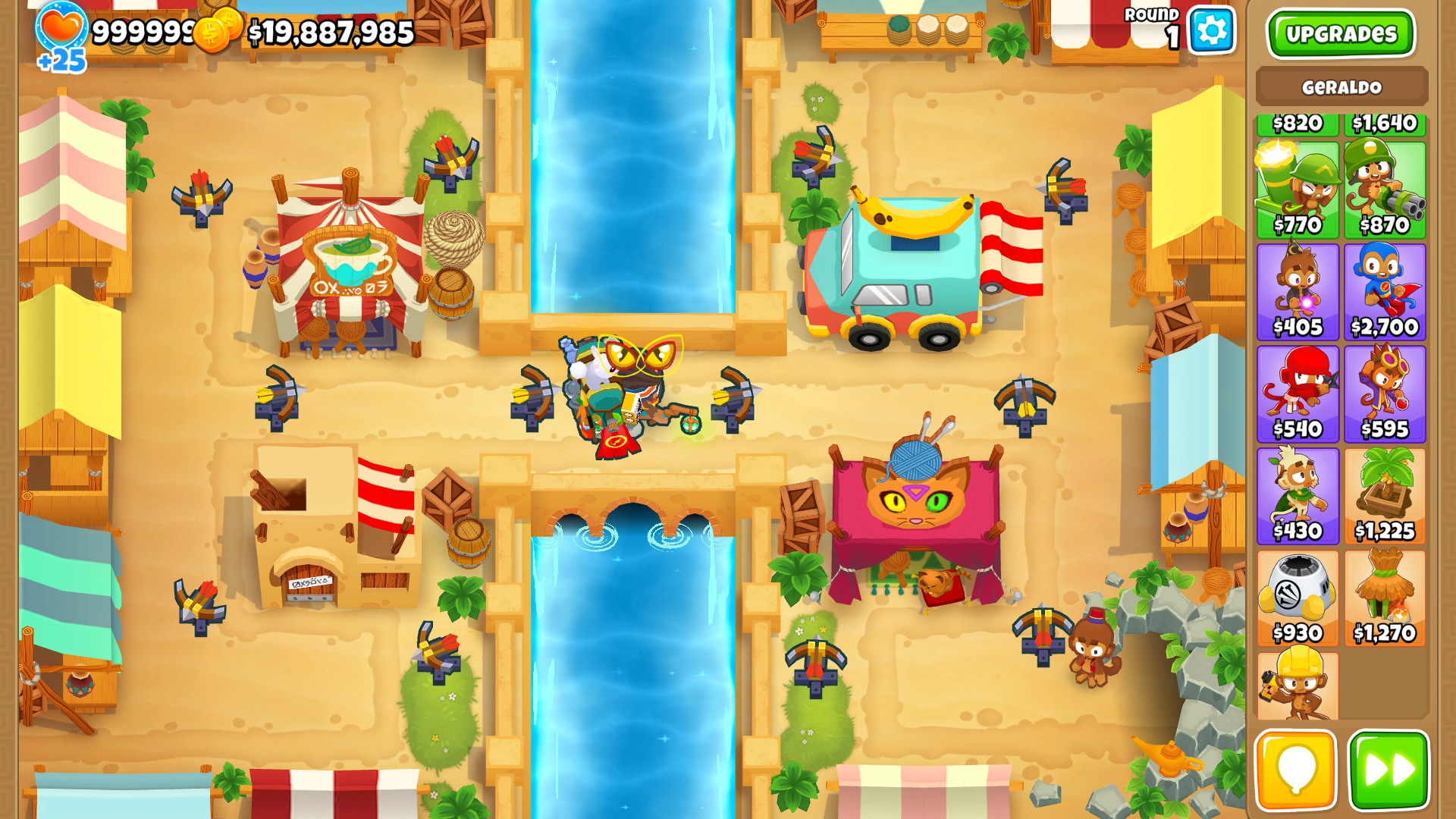 The shooty turret is a slow firing, micro footprint tower that can be placed in even the smallest places. Best used on long lanes so it can best use its high base pierce. 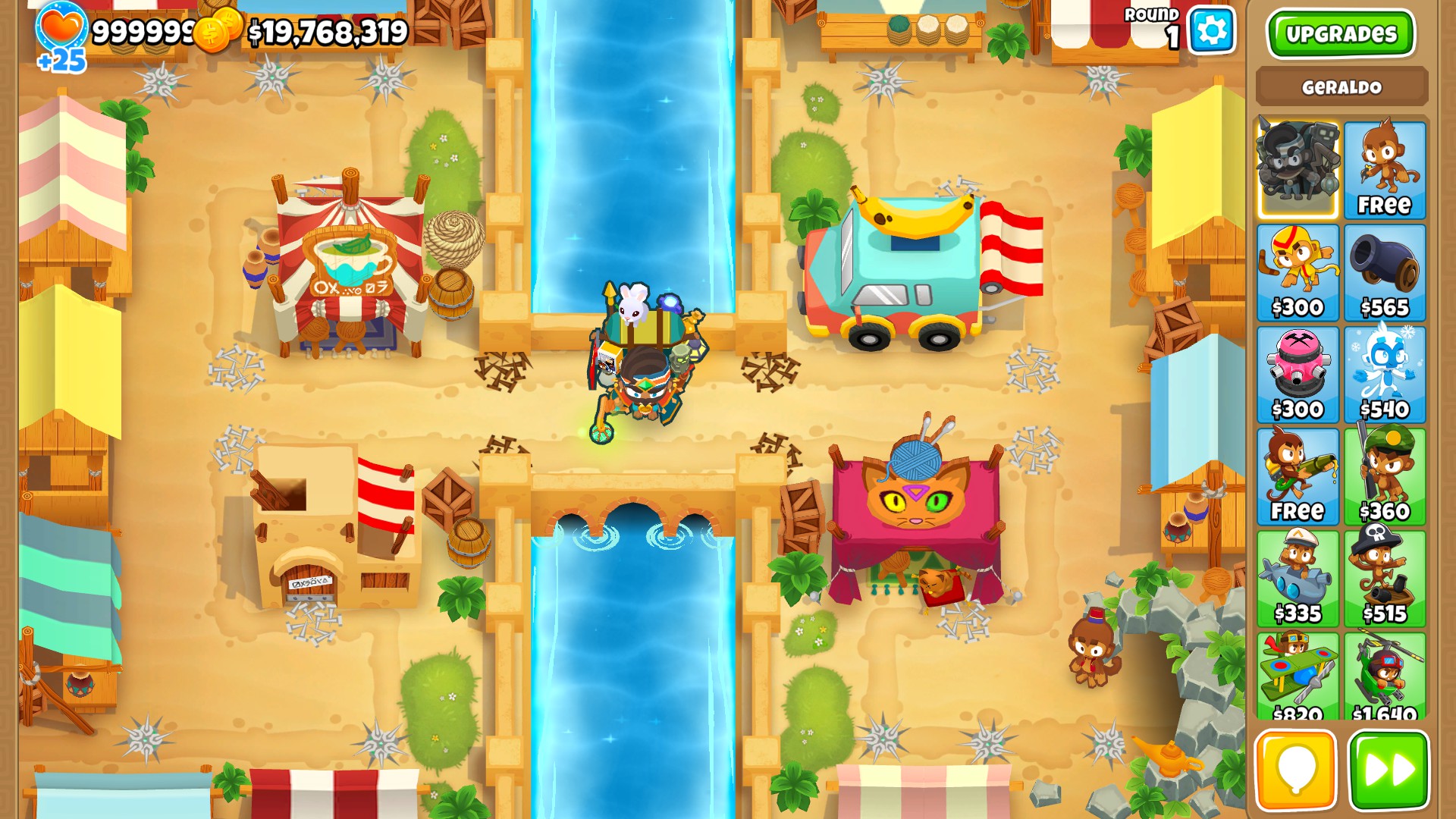 This cheap an whimsical item has a base cost of just $50, they are basically the road spikes item from btd5 and function/usage is similar. The low level nails are handy for popping the r23 camo bloon or the full stack of 10 can be used as an alternative weapon against the round 40 moab. Later levels are rarely useful. 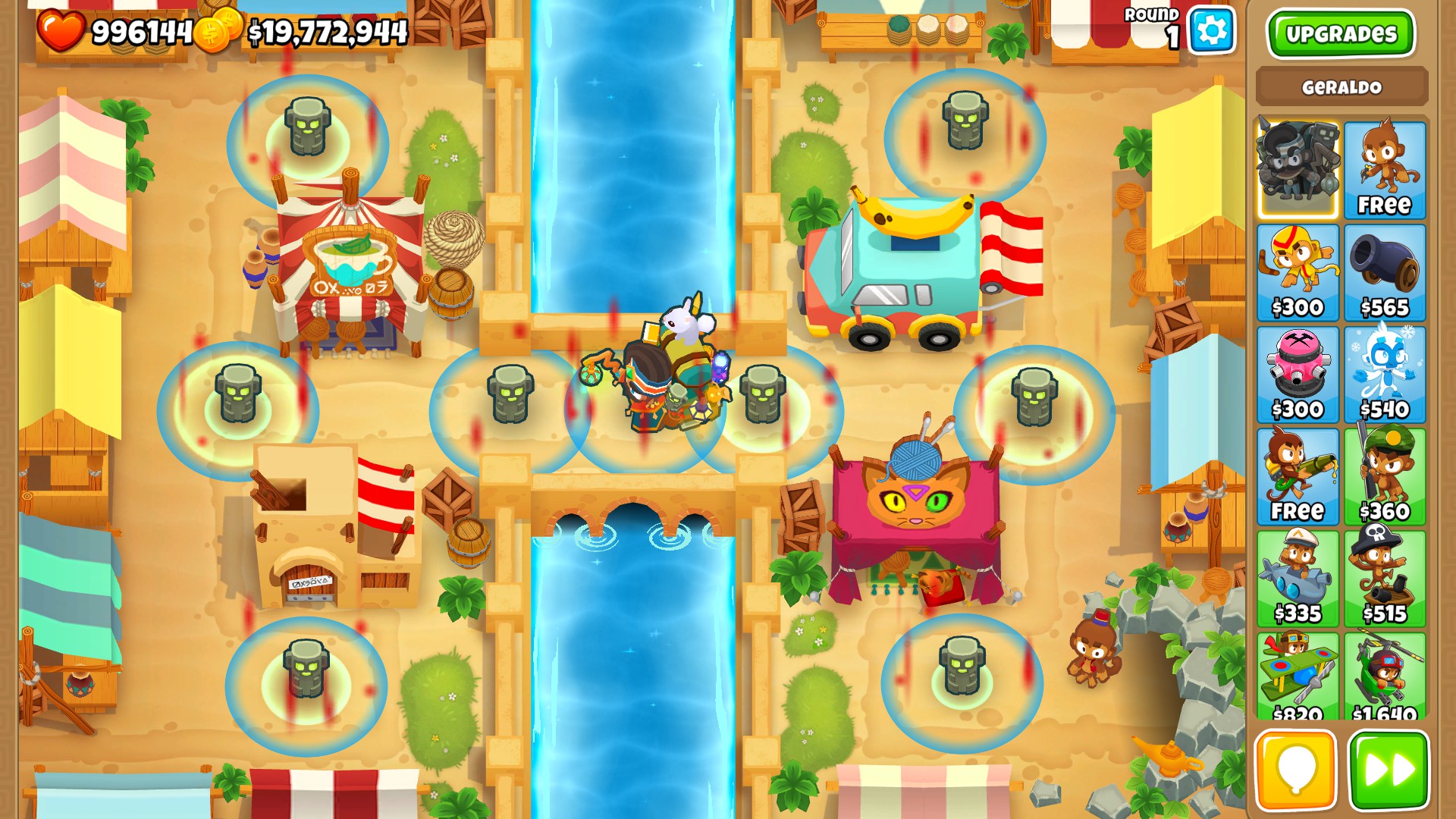 The creepy idol for its $100 price tag might often be overlooked, but don’t be fooled! This is probably Geraldo’s strongest non buffing item, with powerful and cost effective utility for crucial rounds of the game.


At level 12, Moabs can be targeted by the creepy idol.


At level 18 the totems gain “shroud” which allow them to be sold (even in chimps), to apply unstable concoction to Moabs with 3 pierce, which prioritises strong Bloons.


The idols work by first, knocking back (or stunning for Moabs) every 4th Bloon that enters its range for the first time, Bloons are then rerolled if they remain inside of the range of the idol for a long time. The idol will treat child Bloons as new Bloons, resulting in overwhelming knockback when placed near spike factories.


The below table shows the % of Bloons knocked back based upon the number of layers within the Bloon. 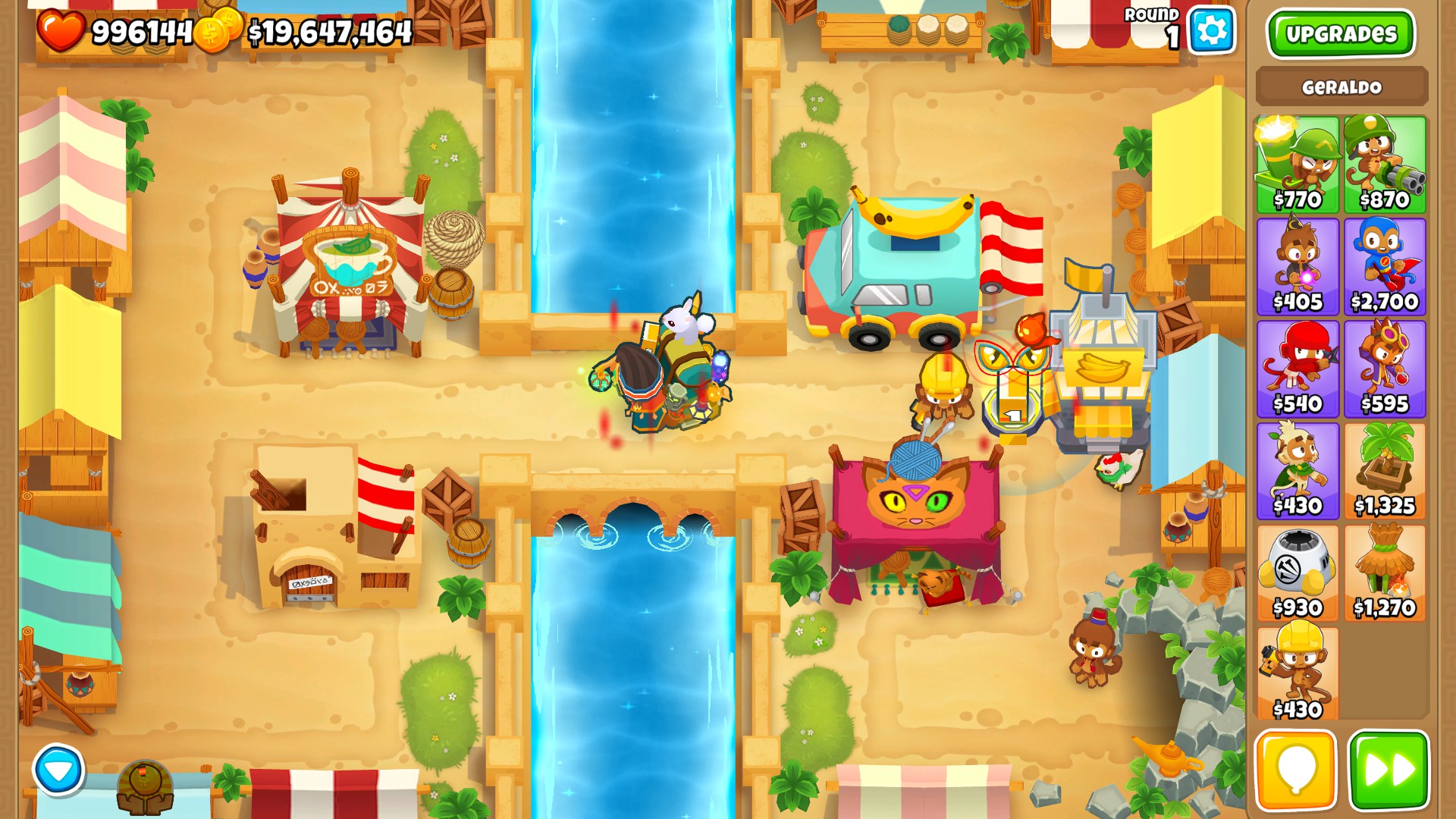 A simple item, it simply increases in base value as the round number increases. Its value is NOT static across game modes, with its price scaling for new difficulties. On half cash the interest rate is also reduced and if there are multiple heroes on screen, the interest rate is divided by the number of heroes. Values in table based upon buying the action figure instantly (such as when in co-op). 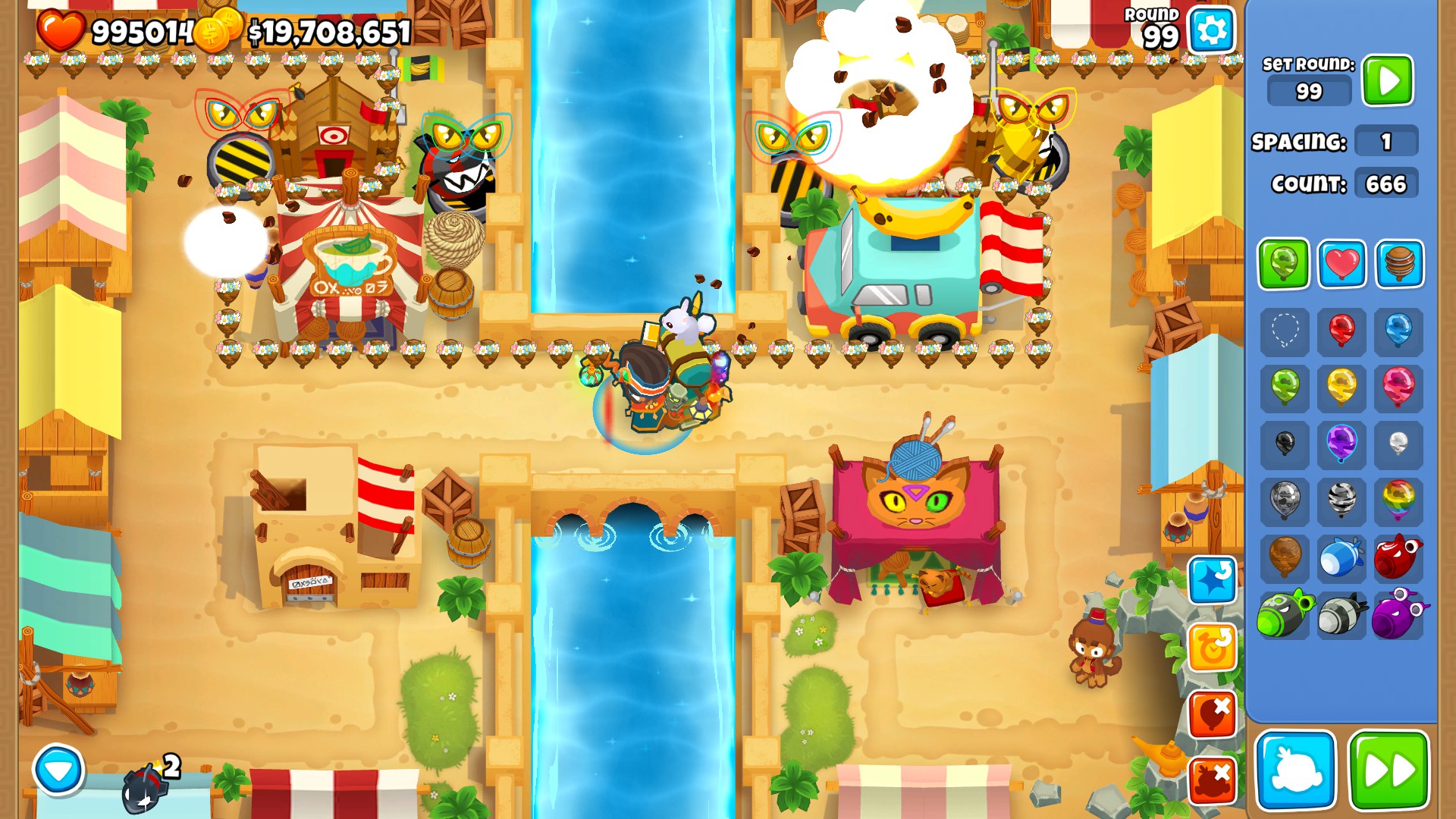 One of the easiest to understand items sold by geraldo, these potions allow a tower that has been given it, to see camo bloons for 10 rounds. Base cost of $200.


At level 14 the potion lasts for 15 rounds instead and provides a substantial increase in range.

At level 19 the potion provides a flat +1 damage to all camo bloons. 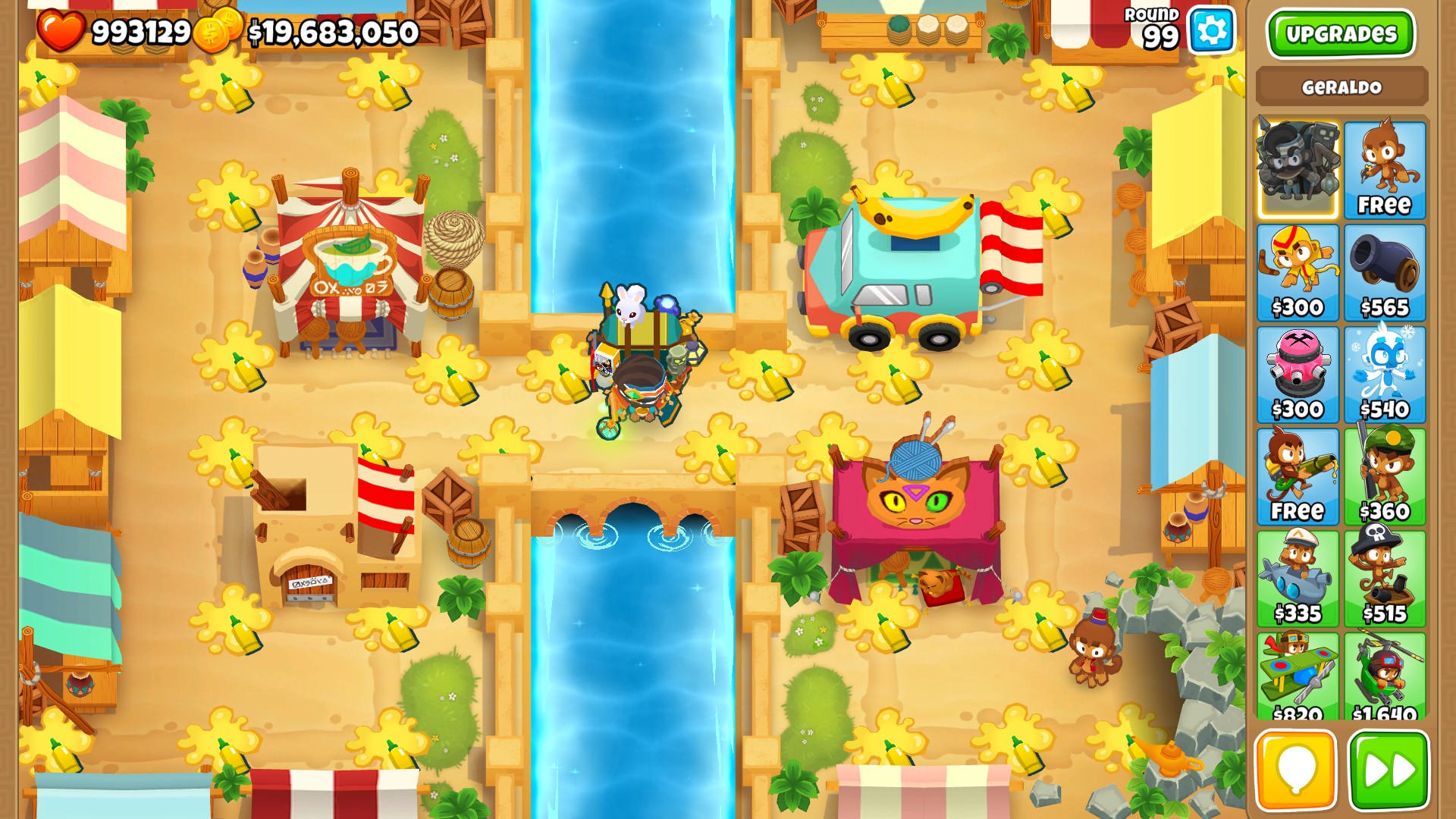 Sticky, cringe. Its a reference to amazon btw, which is also cringe. At $100 per bottle though the performance is not cringe, and these little glue bottles carry geraldo as a hero, providing unbeaten earlygame utility. Has 300 pierce.


At level 17 the glue gains the ability to target Moabs, This however is a downside as they consume ludicrous amounts of pierce. Ideally all glue should be used up right before level 17 to allow it to continue sticking super ceramics.

Of these interactions, only the DDT glue effect is viewed as a good use of this glue, so moab glue should be spent on rounds like 90, 93, 95 and most importantly 99. However, do not expect this glue to be particularly useful vs 98. 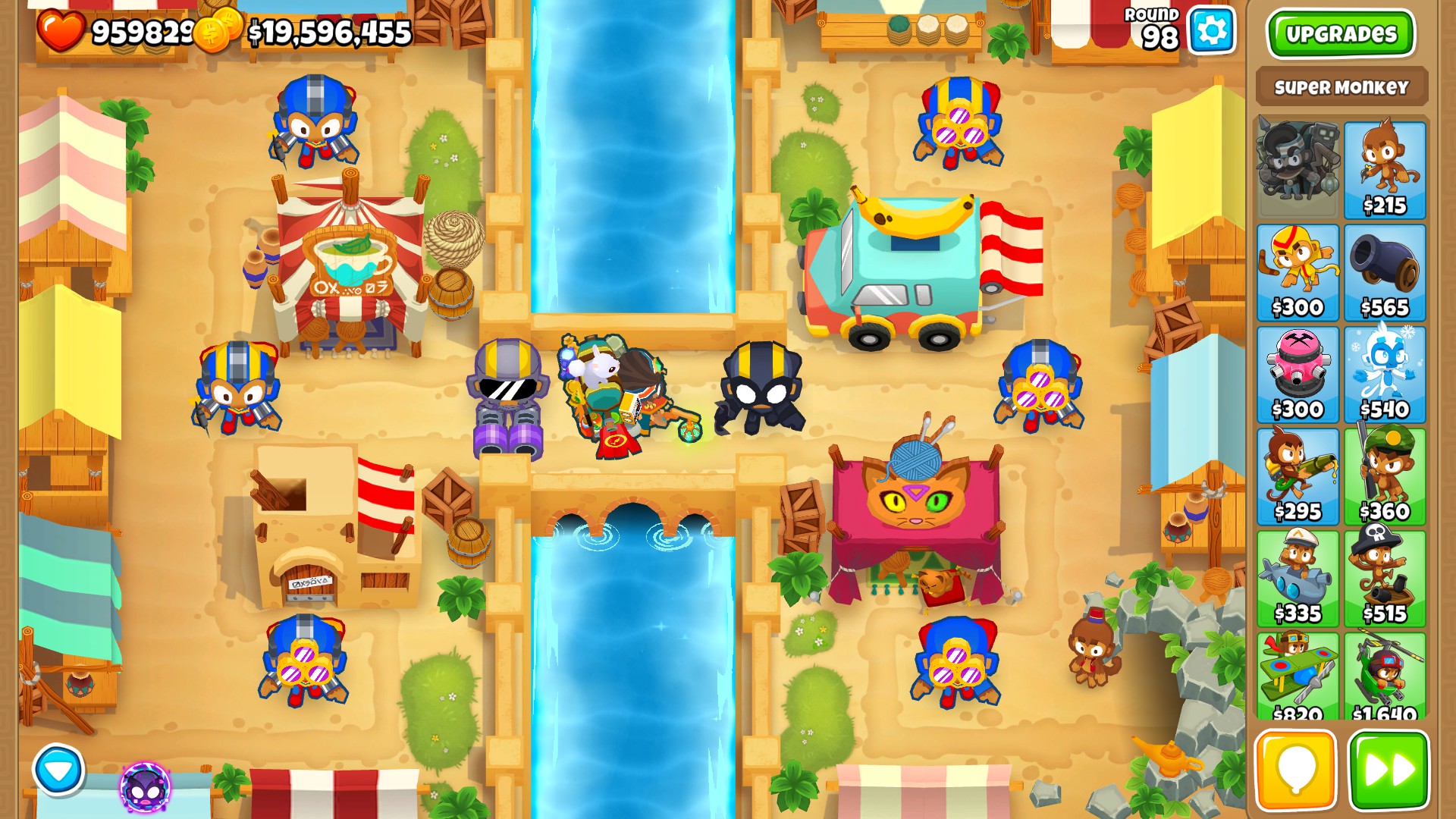 The worn hero cape is an incredibly simple yet overwhelmingly valuable item, it allows a dart monkey (regardless of placement) to be instantly sold and replaced with a super monkey, the catch being that it is limited to tier 3 and below upgrades.


The value of this item is really in chimps mode, you can effectively use starting darts to discount into $1620 (base) cost super monkeys, which can often be put in places that are nigh impossible due to starting dart spots. Not only this, supers in general have excellent synergy with geraldo.


The other use of this is obviously to allow super monkeys to be put in places where they normally cant fit, like on the barrel in spillway. 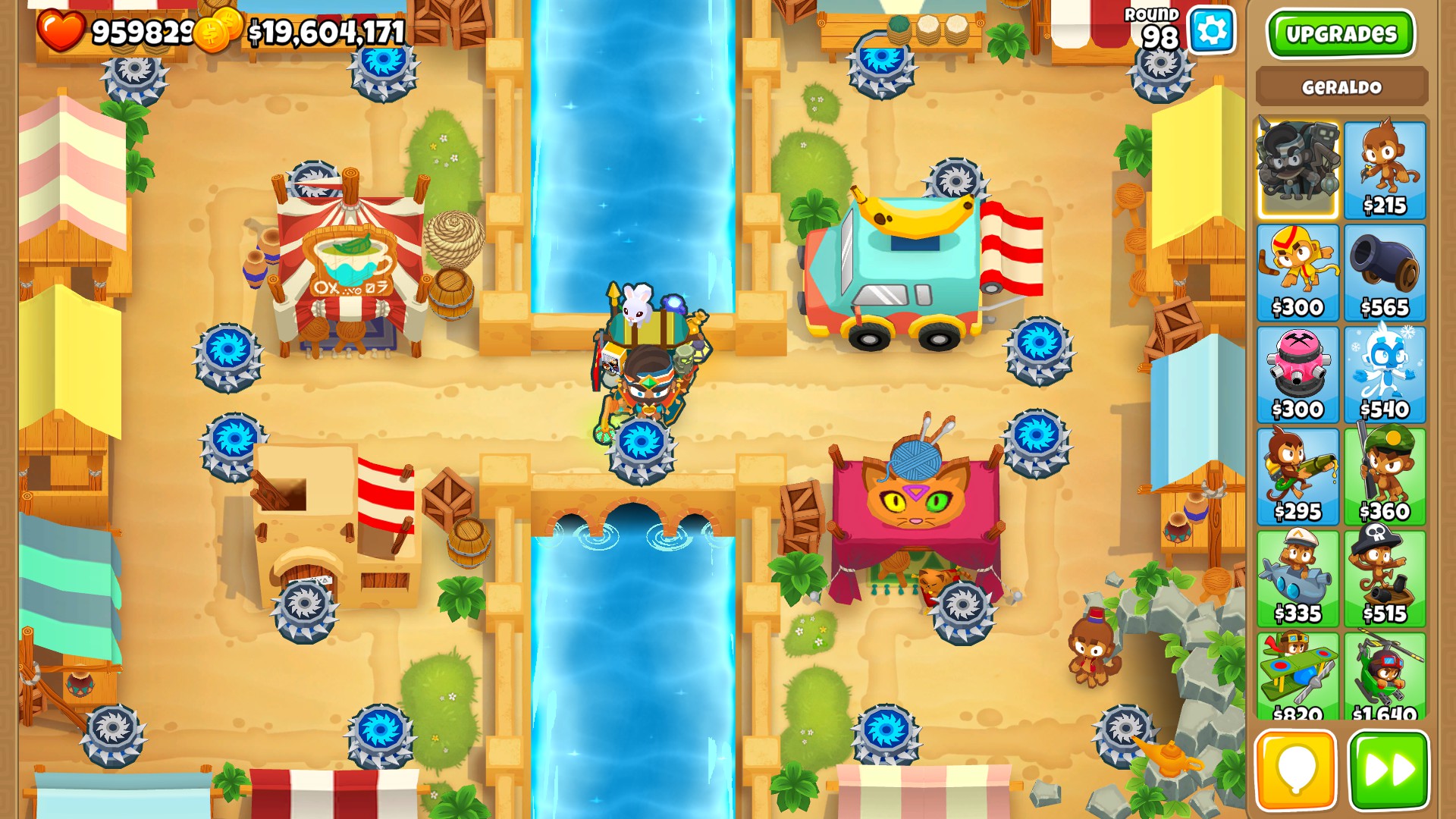 The Blade Trap is a simple and VERY strong item, it basically acts like a portable blade Malestorm panic button, simply place it slightly infront of Bloons you don’t want to exist anymore and it will obliterate them with a Malestorm ability that pinpoints (since it is directly spawning from the map).


At level 15, the blade trap will instead use a full strength Super Malestorm.


The primary use of these are for killing the r40 moab, r60 bfb and for oneshotting r98 in tandem with the mysterious shroud totems. 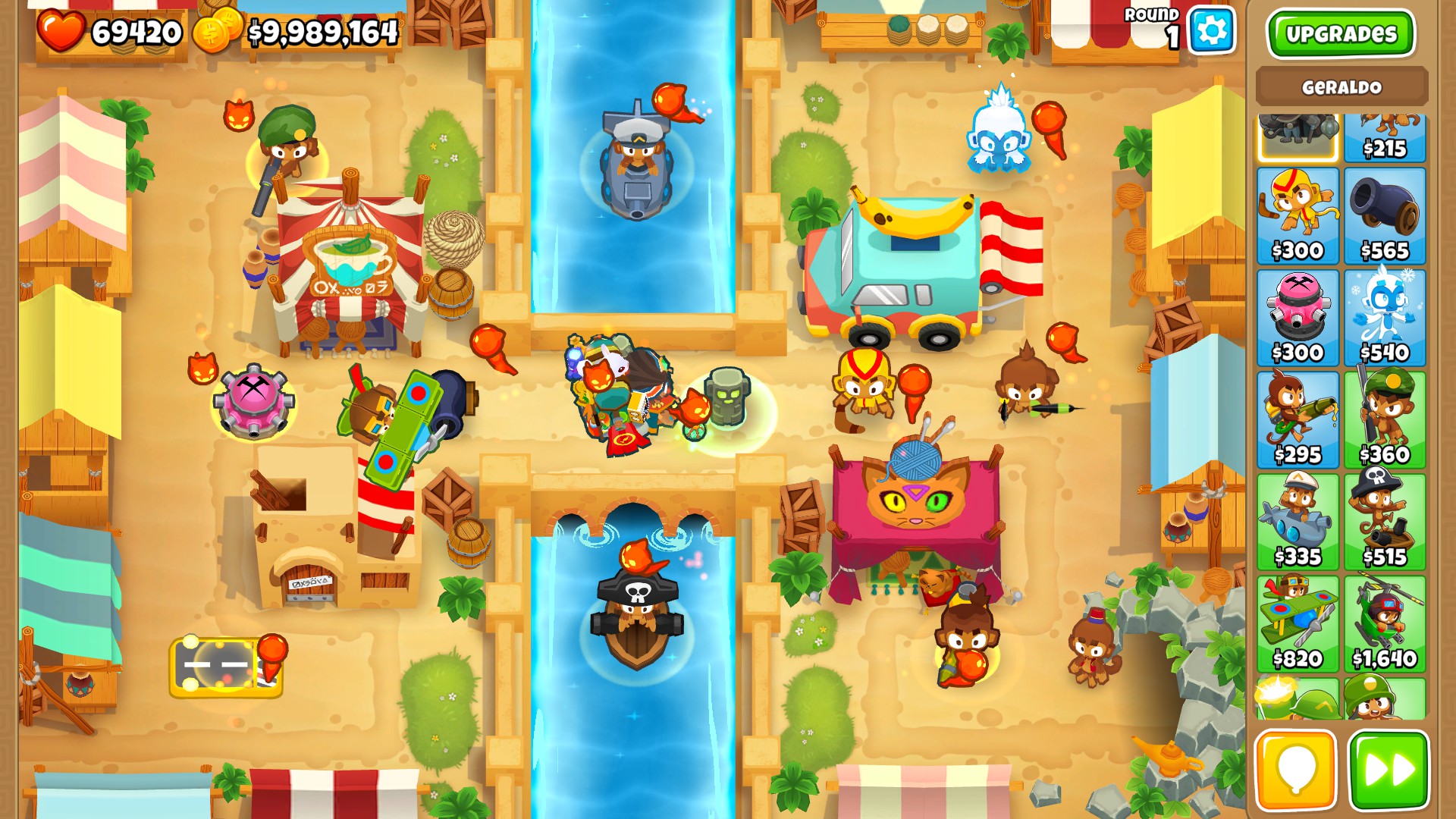 The spicy fire, with a base cost of just $500 you get a full fat dragons breath familiar that deals an enourmous amount of damage relative to its price. They last 10 rounds, so purchasing on r90 or later will make them last the remainder of the game in chimps.


At level 16 the spicy fire bottles get upgraded, although this upgrade only improves the largely irrelevant damage over time effect. 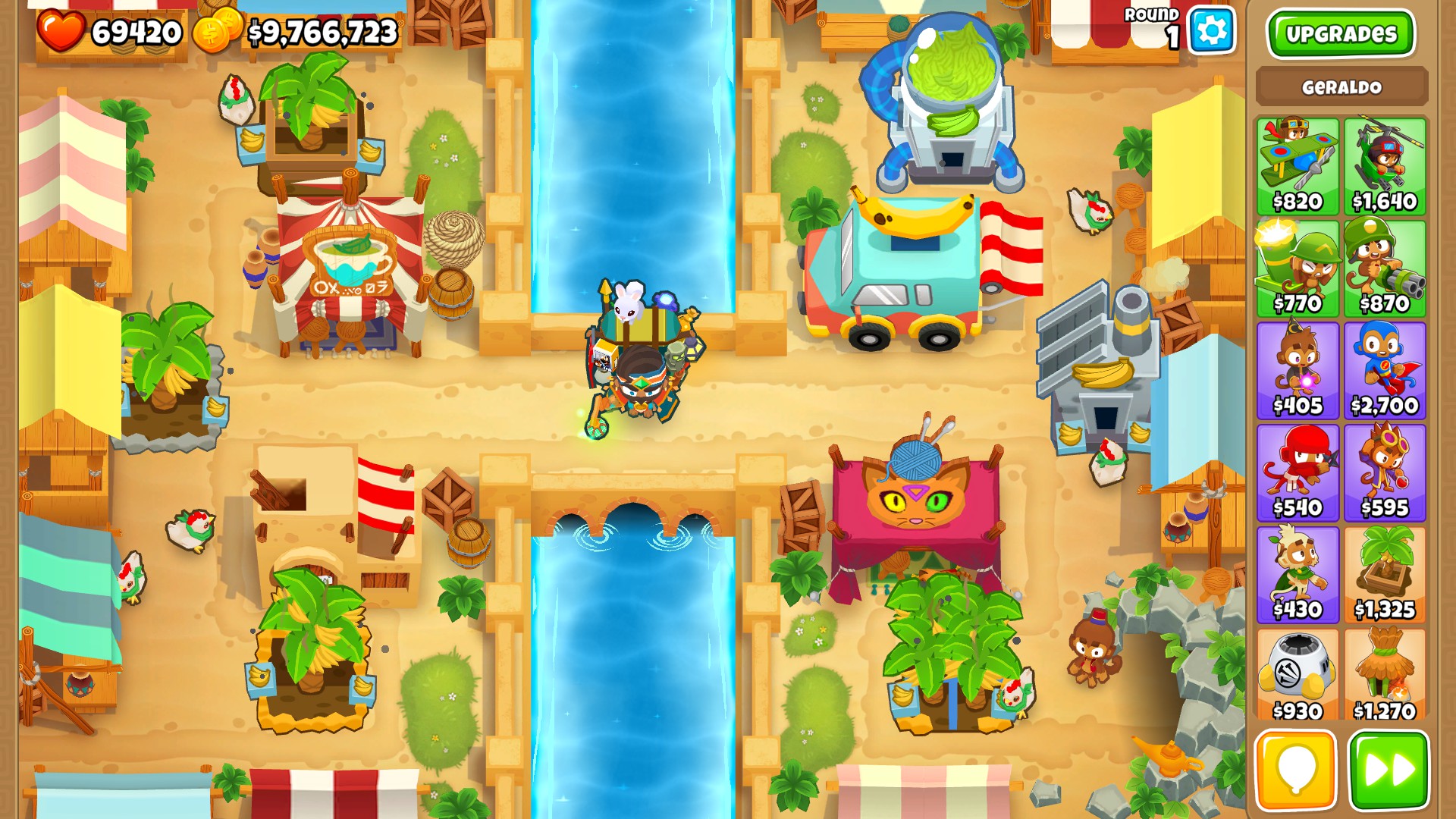 Avoiding the typo, this $300 bag of poop will make banana farms produce high quality produce for 5 rounds, increasing income by 25%, this stacks multiplicatively with the xx4 villages 1.15x cash multiplier. Fertiliser cannot be used on a bank, opolis or marketplace, and is best used on a banana central or facility.


Just remember to keep re-applying it. 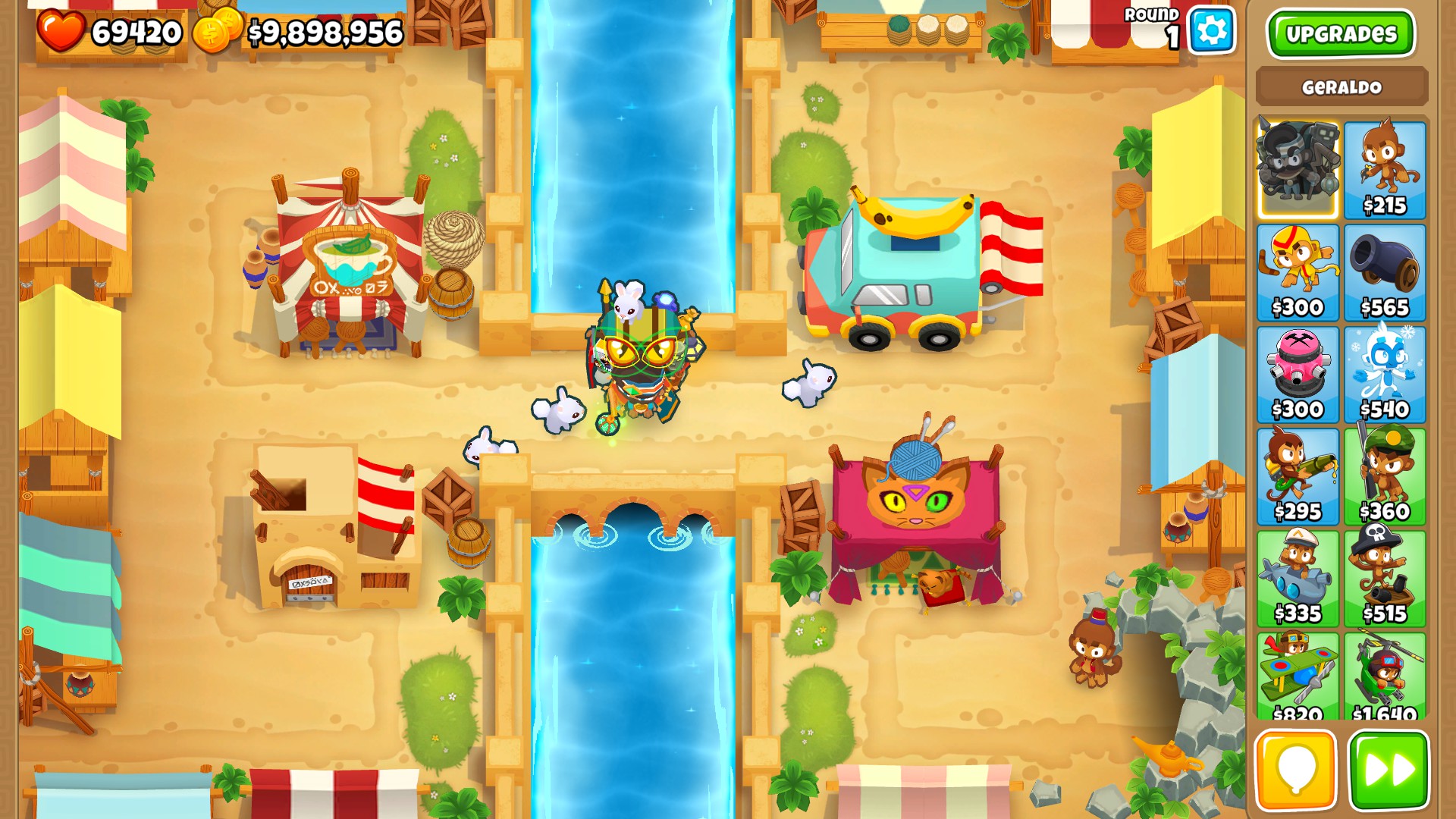 Affectionately known as the bunny paragon, this small item for the cost of $6000 over 9 rounds will become a 40 damage, 10 pierce, and 1s cooldown, camo popping normal type global range tower. It can deal tons of damage across the map and is fairly cheap for what you get. If you dont keep buying pet rabbits after starting the bunny paragon, each individual pet rabbit despawns after 10 rounds, with 4 being placed at once being the threshold to unlock the tower itself, which is tethered to geraldo. Once it spots a bloon it will run around on its own. 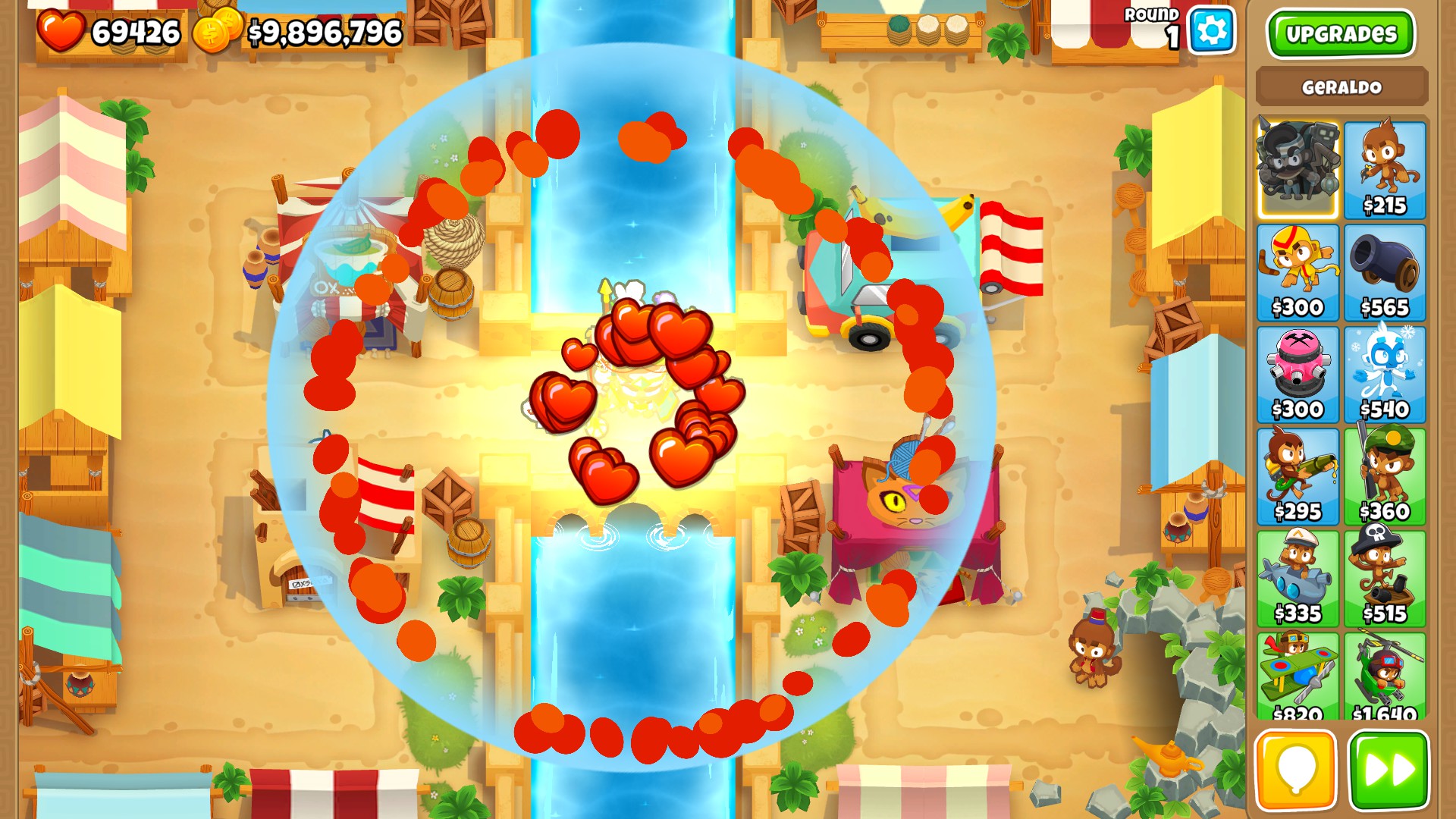 This small $1000 potion will provide a refill of up to 50 missing lives and resets all of the cooldowns of towers with abilities, including other heroes in co-op.


The main use of this is to either extend pa*sive abilities (such as TT5 or plasma monkey fanclub) or make singleshot abilities deal many times their usual damage, such as with spike storms vs the B.A.D 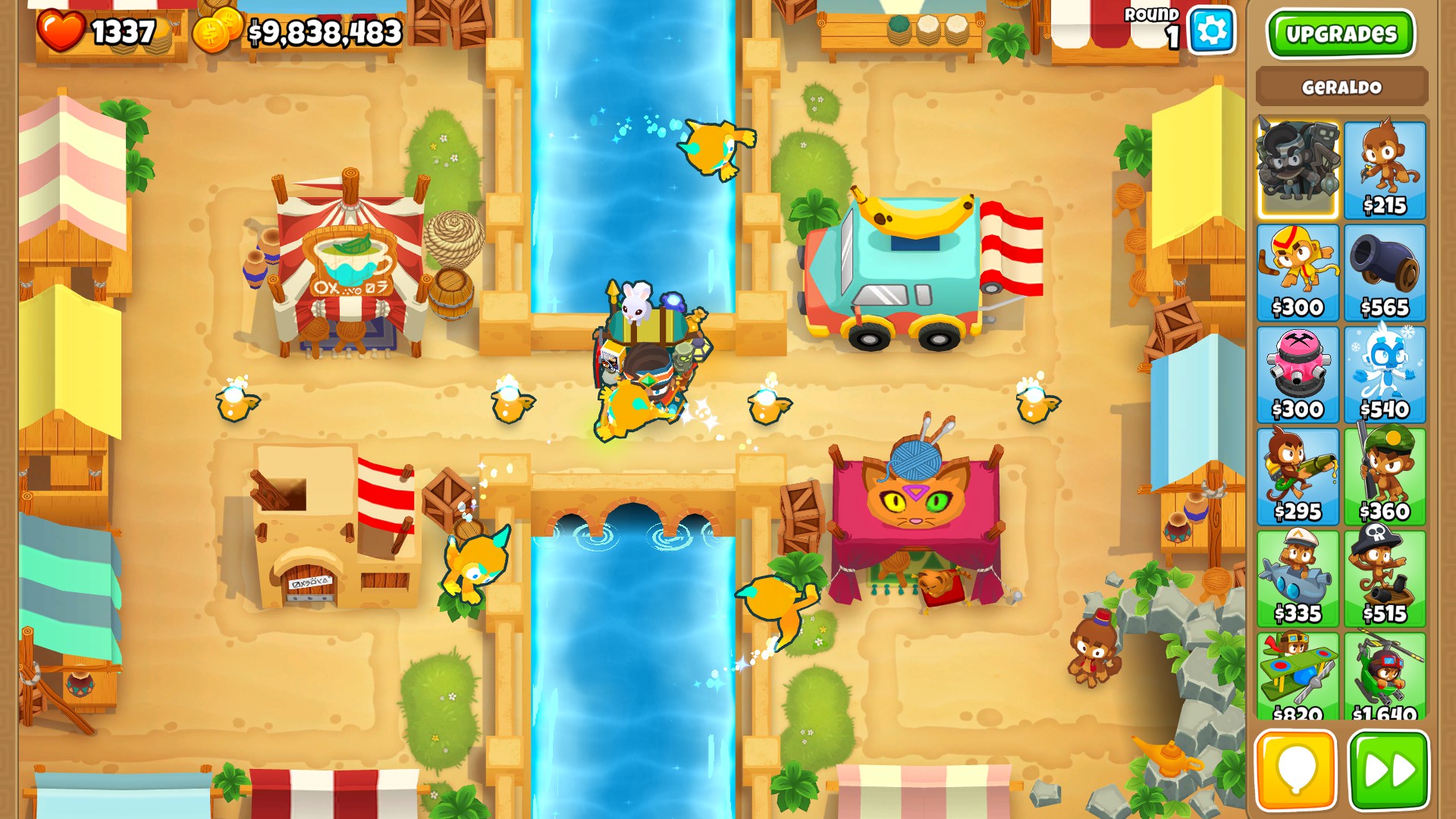 Its overpowered… For $2000 at level 12 you can loan a spare t5 ace for 3 rounds, although sadly it is locked to the middle of the track for some reason… The level 18 upgrade gives it a second attack which is locked to Close targeting. 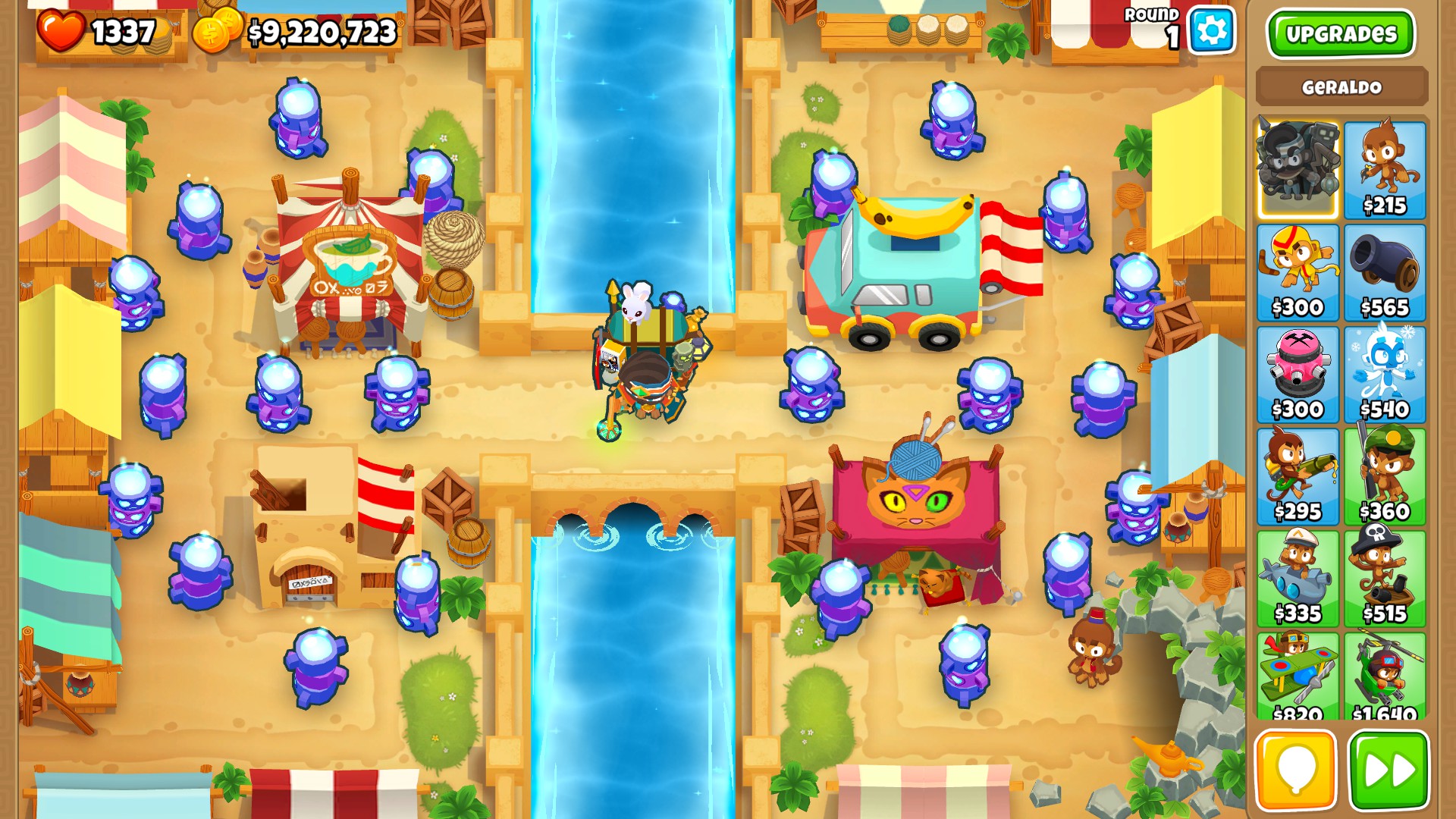 
The only practical use this totem has is for doing the degree 100 achievement as they are far, far too expensive and weak to have a use in boss events.

Geraldo has many shop items, hopefully this guide has helped you understand Geraldo’s shop a bit more.


If you want more guides, i am taking suggestions in the comments 😀

I hope you enjoy the (GUIDE) Geraldo’s Wider Shop – Bloons TD 6 guide. This is all for now! If you have something to add to this guide or forget to add some information, please let us know via comment! We check each comment manually!