How to play Obese Gun Man from Team Fort 2 – A guide that explains self-defense situations that you will face as the Obese Gun Man. 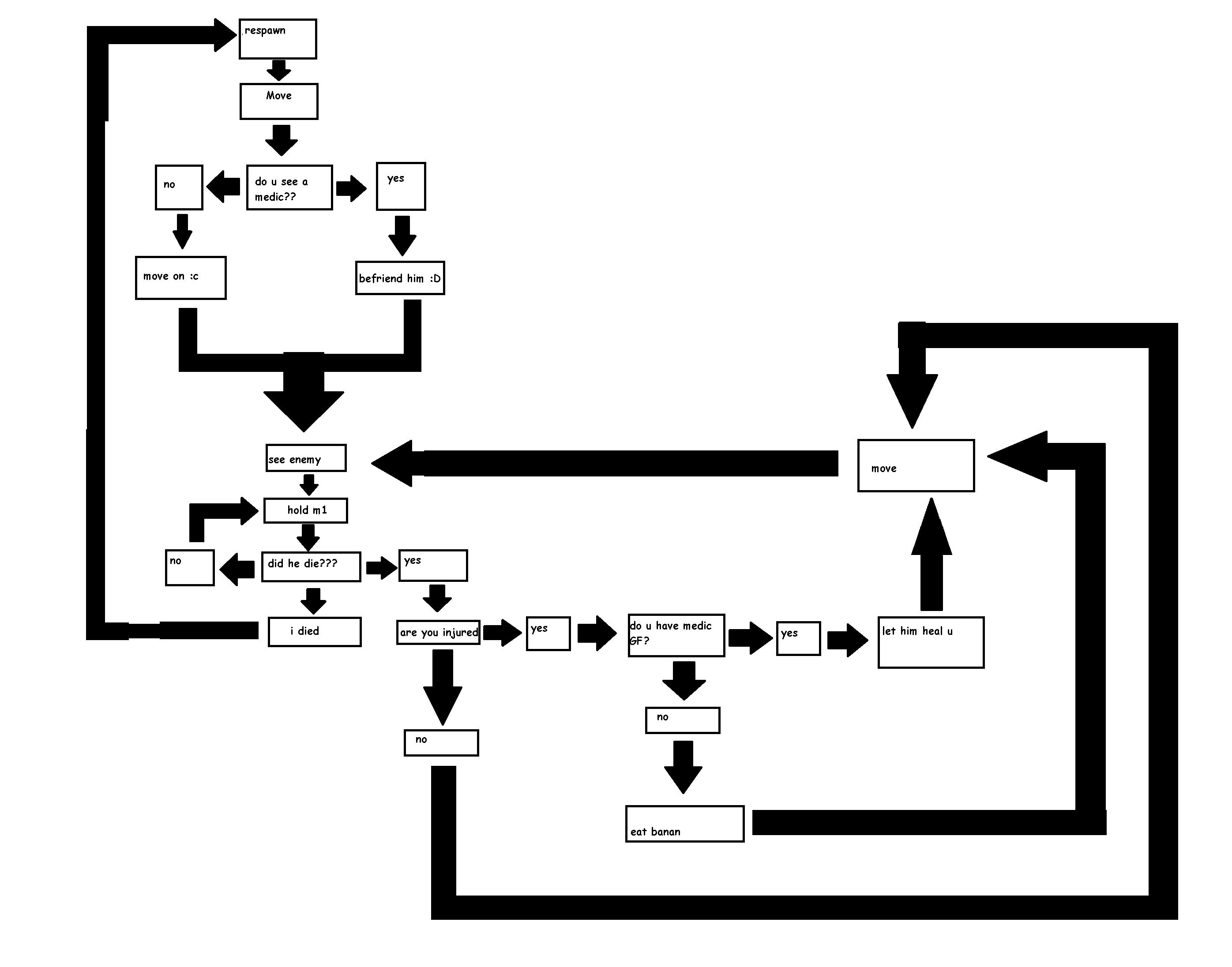 Heavy is a powerhouse, he’s build to endure and dish out DPS at short and medium ranges.


The Heavy’s best perk is his 300 HP, however this comes with a cost. As the heavy, you are not only the highest HP cla*s but also the slowest cla*s in the game. Due to this it’s very easy to get caught in a bad spot. It’s not only important but crucial for a heavy to have a good sense of his surroundings.


Main advantages of a Heavy:

The Heavy is a slow cla*s, not only due to his movement speed but also due to his Minigun rev-up time. This is his main drawback, in order to do well as the Heavy you need to understand how to think a step ahead.


The Heavies cons are as it follows:

You are both incredibly hard and easy to kill. This will all depend on how you play, how you interact with your team and map. With that said, there are maps where the Heavy will exceed at and maps in which he’ll have a harder time.


On Game-modes like Attack/Defense or Payload. Heavy plays roughly the same with the exception that there is no longer a cart to push and that there are now multiple points to capture, for convenience sake I’ll keep this part focused on Payload. If playing on the offense team, try to see if your team has a medic, if so you can use that to your advantage and do an Uber push. If not, then you can still be effective without one.


Spawncamping is a common strategy and will be used on both Attack/Defense and Payload maps, your primary goal with your team is to get out of the spawn. This will be the hardest thing to do depending on the enemy team. Utilize the fact that you will have a quick respawn time and are right in front of the cart. The defending team will always have a longer respawn time (depending on map, for most it will be longer), and it will take them much longer to get to the cart as well. Since you’re slow and since the cart is near the spawn, you can very easily use this to your advantage. Try to either catch someone off guard and s*rip their HP away at close range, or play around the cart doing chip damage from medium to far ranges.


Once you get out of the Spawn and push the cart through the first point, it’s mostly going to be smooth sailing dealing DPS and killing enemies. It’s important to avoid Sniper sightlines and Spies throughout the entire process.


There will be a point, however, where a chokepoint will be presented, chokepoints are incredibly good for holding off as the defending team, thanks to great Sentry placement options and Demoman and Soldier splash damage spamming. At this rate your only hope is to see if you can flank the Demomen and Soldier, destroy the Sentry nests and brute force through the enemies before pushing the cart. Easiest and most efficient way is by using a Medic uber, and since most of the best chokepoints are around the last cap, it should win you games.


If playing on the defending team, then it’s a lot more important to hold chokepoints while revved up, to play more pa*sively. Charging head-first to a room that’s potentially filled with attackers is not always a wise idea. Only play aggressively on defending team if there’s a Teleporter at the attacker’s Sentry Nest, preferably with an Uber.


What to focus on

Stock Minigun – The “balanced” option of a minigun. It can be used both defensively or aggressively. Like all the other weapons in Heavy’s arsenal it is a Hitscan weapon, so practice your tracking aim and flick aiming. It deals roughly about 500 DPS. Jump Revving is very good with this Minigun. 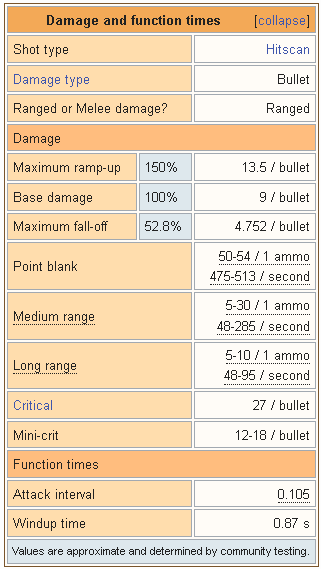 The Tomislav – The “Aggressive” choice of a minigun. It can still be used both defensively or aggressively however, but it has been tweaked to fit the more aggressive play-style. The Tomislav has interesting stats, I would debate to say that it is overpowered to a small degree. It only has one downside, a -20% slower firing speed. TF2 was never a game about DPS but rather a game of Burst Damage. Despite lowering the DPS of the Tomislav, The Tomislav is 20% more accurate which means it can compete head to head with the Stock Minigun in terms of mid-range damage. So as long as you’re not engaging heavies with the stock-Minigun in close quarters you will be able to compete with them. The real kicker is that it’s the only Minigun with a silent Rev, which means that this is the best Minigun to use to play as “fat flank” or to surprise your enemies. It comes with a +20% faster spin-up time which means you will also rev-up faster than most heavies, which in turns means that you will begin dealing damage much sooner than the heavies you’re up against. Jump Revving with this minigun is superb. 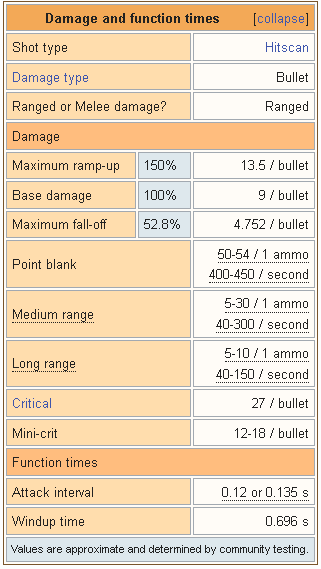 The Bra*s Beast – The “Defensive” choice of a Minigun. It doesn’t perform the best as an aggressive minigun, but it seems to perform very well as a defensive choice. With that said, it is still possible to use the Bra*s Beast offensively, but you will need to think an extra step or two as you’re essentially almost-still while revved up. Revving up 50% slower which will hinder your mobility, which is the Heavy’s biggest downside. One thing to note about this minigun is it’s 20% damage reduction while at 150 HP or below, this 20% Damage Reduction will also be triggered on a fully charged Headshot which means you’re able to survive with a fraction of your health. The Bra*s Beast’s biggest upside is it’s +20% damage, thanks to the 20% Damage Reduction and +20% Damage, you are the strongest Heavy while revved up. Not recommended for beginners as this Minigun has a steeper learning curve from the rest, it is still definitely a good minigun. Jump Revving is the worst with this minigun, just barely usable. 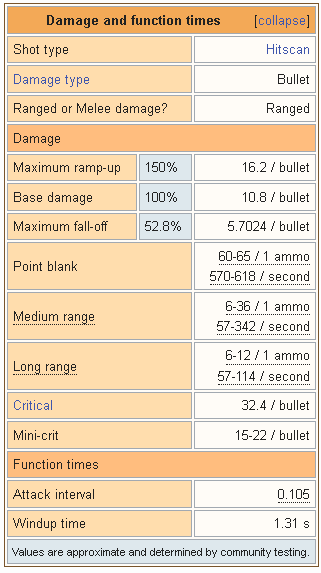 The Natascha – The “Defensive” choice of the Minigun. Performs well both offensively and defensively. Best used defensively however. The choice of many Heavies that wish to hard-counter Soldiers, Demoknights, Scouts. Unfortunately the Minigun has a bug where players are able to spam keys “A” and “D” to nullify the effects of the slow, making it weaker against players who are aware of this bug. With that said, most players won’t use it, so you’re free to rely on that slow for most situations. Despite it’s -25% Damage, the slowing effect this MInigun has to offer makes your enemies easier to hit for you and your allies. Like the Bra*s Beast this Minigun makes you “tankier”, you get a 20% Damage reduction which makes you harder to kill. The -30% Slower Spin-up time isn’t as much of a problem as one would think thanks to the 20% Damage reduction. Jump Revving with this minigun works fine, you should start shooting just shortly after you land rather than mid-air with the Tomislav. 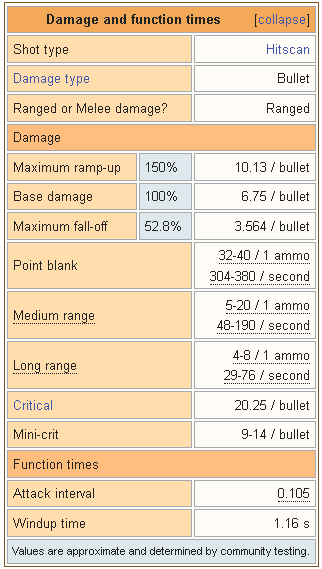 Huo-Long Heater – The Derpiest Minigun choice. It can be used both offensively and defensively. The most unique Minigun as it promotes a more “a*sa*sin” Heavy play-style. Assuming you can jump in front of enemies, rev up, and light them on fire, you are able to get a +15% Damage bonus and afterburn damage. The downsides of this Minigun is that it drains ammo pretty fast as it’s revved up and that it’ has a noticeable -10% Damage. I personally like this Minigun, one major issue with it is that you can’t see well below you, which makes shooting under your ring of fire very annoying. A common belief is that this counters spies, which it doesn’t, spies can very easily just jump over the ring and backstab you anyways. Can Rev Jump just fine as the Stock Minigun. 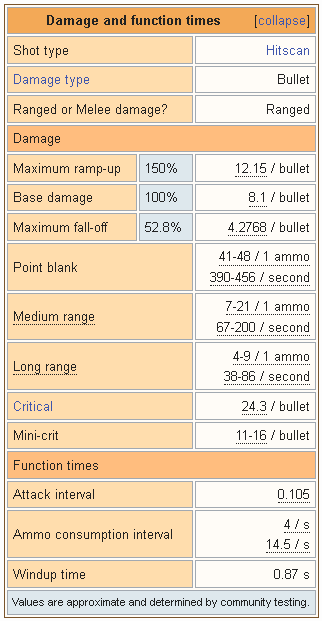 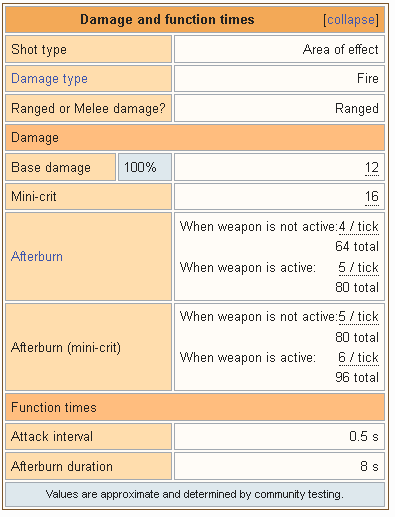 Medic GF – Someone who will keep healing one person and only one person. Since Medic players lack testosterone it has been concluded that Medics are mostly women and scummy femboys.


birb – A rare Heavy sub-species to the “Hoovy”. Acts the same way with the only difference being that they have a Bird-head.


Hoovy – A heavy who’s decided to become friendly. They pose no threat and will give you sandviches in return. Feel free to kill them if you want to up your score, or keep them alive as a food dispenser.


Fatscout – Throwing away your minigun and only sticking to your shotgun. Works surprisingly well on koth_nucleus.


Jump Revving – Revving up while jumping, it is usually implied that one will use it to check corners.


Fat Flank – A Heavy who picks up the role as “flank”.


Frontline – Where almost all of the fights will occur, Heavies work best as Frontlines due to their high health.


Tossing – Being able to successfully give your team-mates Lunchbox items, hence the name “tossing”.


Braindead – To describe a teammate as “braindead”, someone who can not think once in their life. In Heavy terms, to describe a Heavy player with no gamesense, easily backstabbed or headshotted.


Sentry on Cart – Describes a heavy, usually with the Bra*s Beast, who refuses to get off the Cart. Usually wins games too.


Level Two Sentry – A Heavy currently revved up with the Bra*s Beast who refuses to switch spots.


Level Three Sentry – A Heavy revved up with the Bra*s beast with a Soldier besides him running the Beggar’s Bazooka.


Cool Homos*xual – Used to describe a Medic that does an incredibly good job at Medic.

Here we come to an end for the Heavy for Dummies – Team Fortress 2 guide. I hope this guide has helped you with your gameplay. If you have something to add to this guide or believe we forgot some information to add, please let us know via comment! We check each comment manually by approving them!