Heyy! Hi! I'm Jenny. This guide is a way to minmax with the driven a*similaters and rush your neighboring empires within the first 30 years. This will at least double your pops, then you can repeat the process and snowball quickly. This playstyle allows me to get around 500 pops in 2280 or earlier (Pictures are included for proof).

Heyy! It's good to meet your! I'm Jenny. This guide will show me how to build a strong a*similator empire. It will snowball very quickly and you will be in a position to rush your neighbours within the first 30 year, which will double- or triple your workforce from the beginning.

NOTE: This section is only for beginners. You can skip it if the main tips are important to you. 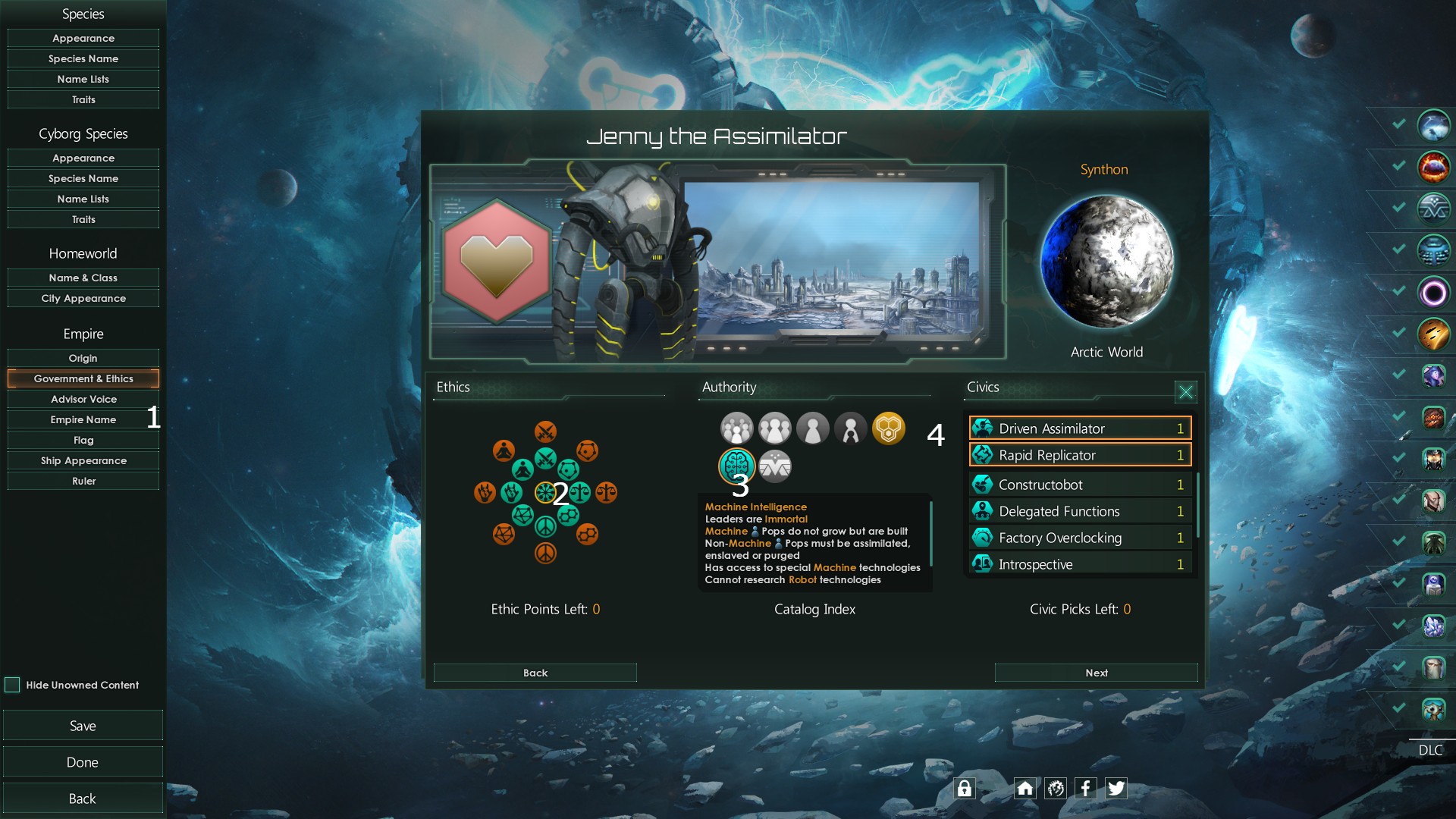 What this does (Skip to the bottom if you don't know what it is):

Go to Cyborg SpeciesTraits (1) – Select Industrious. Weak. and Deviants. If they're not lithoids add the Rapid Breeders traits. However, you could also choose lithoids for the habitability booster if the DLC is available. This will be important later. (All traits shown as 2 in photo). 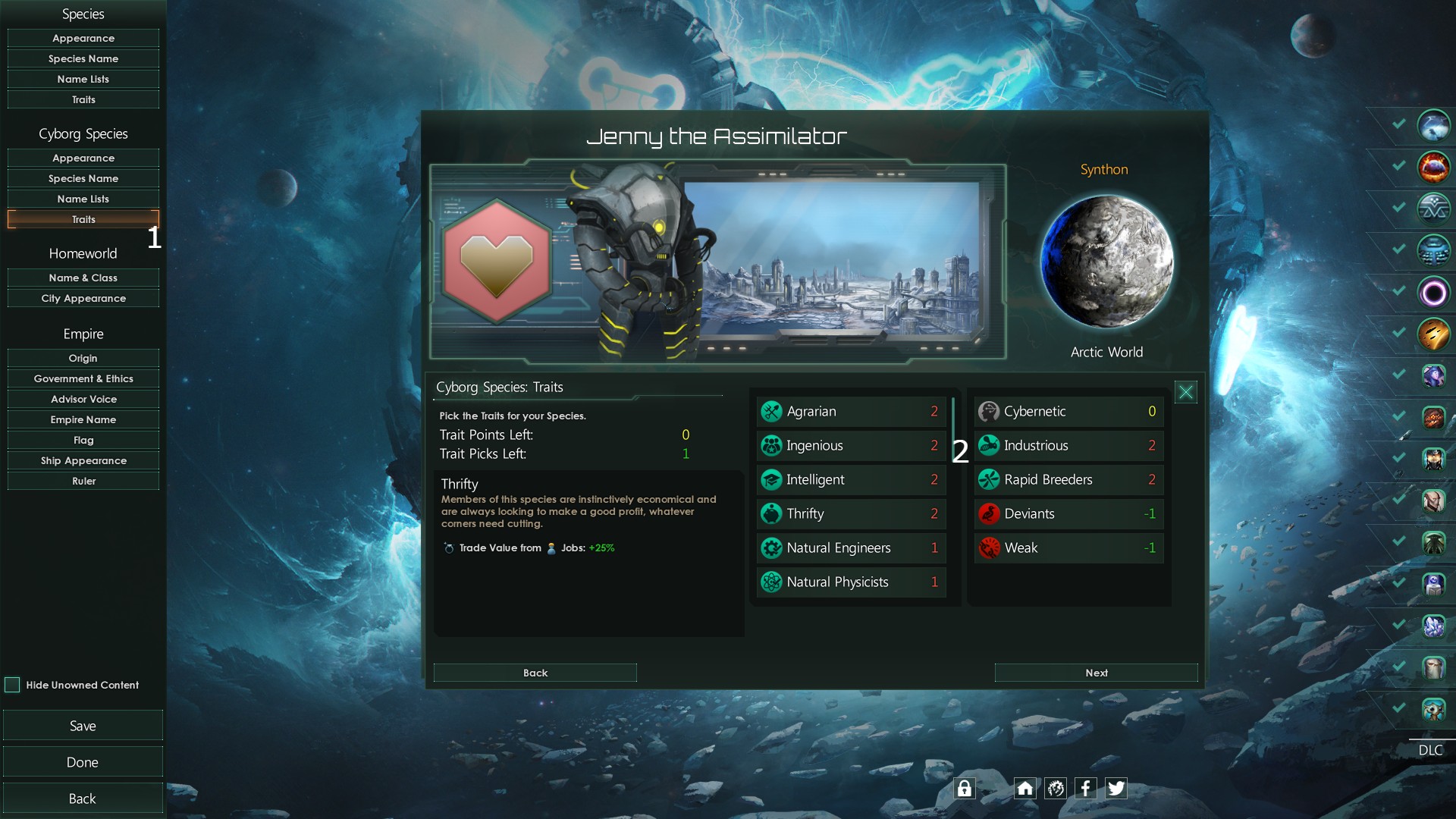 This is what it does:

Next, click on the main robotic species traits above the tab you clicked earlier. Add Power Drills High Bandwidth and Ma*s Produced.


This is what it does:

The Doomsday source is the final option. Your homeworld is likely to explode within 35-45years. However, you will continue to receive huge resource bonuses. You'll get 30% more minerals, energies, and alloys. You can even get up to 120%. This means you have all the resources needed to move and conquer other empires within just 30 years. It will decrease habitability over the course of time, but it doesn't matter as long you are using machines.

The general playstyle will emphasize Minerals and Tech as the starting resources, with Alloys and Tech being close seconds and Energy Credits third. (If there is a deficit you can change the order).

Start by opening the ship designer with F9 or the menu to your left. Click on Corvettes to delete all the components. After that, click on Save. If you did it right, it should look as follows at the end. 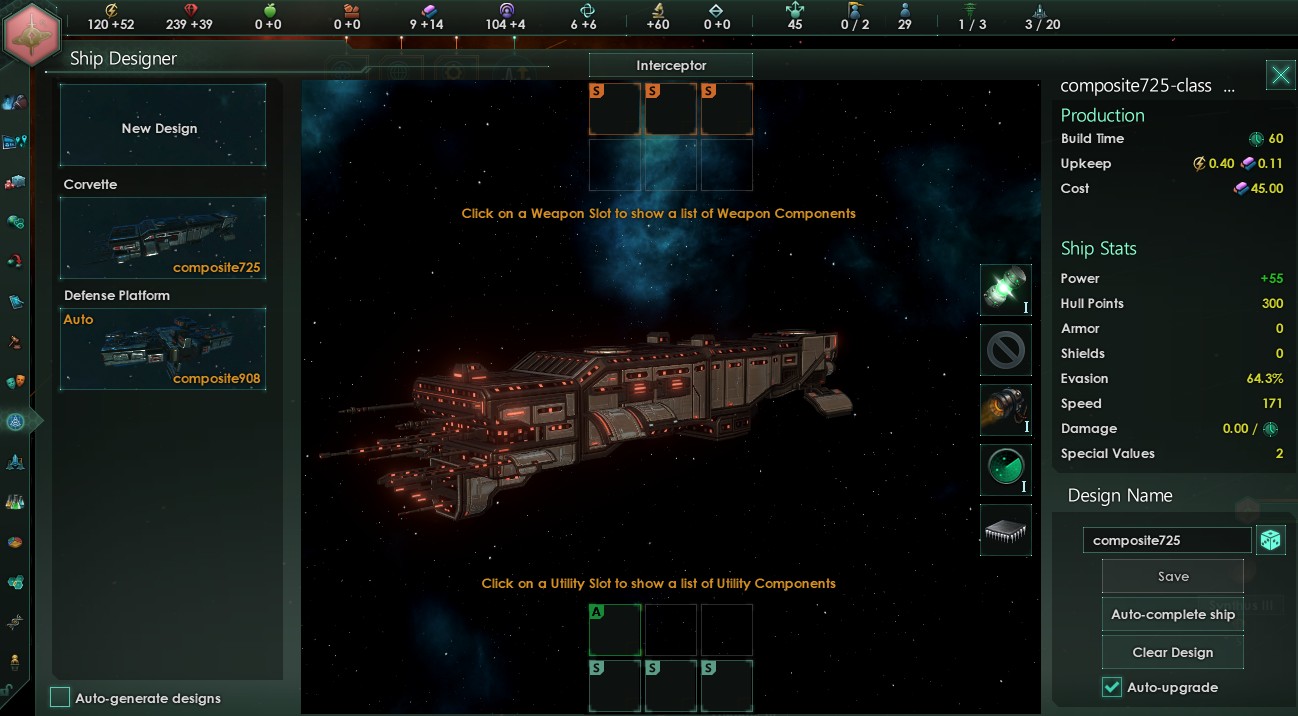 Click on the Start Corvettes and then press Upgrade. This will give your an additional 145 alloys. You can now sell all of your alloys and purchase minerals with them. Now click on the homeworld you want to visit and create mineral districts. As they are being constructed, you can send science ships to explore different systems. Click on Policies to change the default border.


After they have finished, return to your homeworld. Click on the Population tab at its bottom. Click on Menial Drones at the top. Then, press Minus to a few times close to Maintenance Drones. This planet has a surplus of amenities so you can use those pops instead to generate more minerals.


If amenities drop below zero, increase the number of available jobs and/or make nexus deposits to gain more of these job opportunities. This will prevent instability. Last, make sure you build more science ships and hire more scientists.


Keep going until you can make about 100 minerals per day (which should take less than 10 years). Once you have reached this point, you can start to create Alloy Districts on the homeworld as well as some unity buildings. When possible, employ scientists to crew ships and colonize new planets with enough natural resource deposits (i.e. minerals and energy). Your robots will adapt to the environment and you can use them to do so. There should be Machine Assembly plants to encourage pop growth.

The Attack on the 40 Foot Cyborgs

If you find primitives, create armies on your main globe and then land them onto the primitive world to start a*similating. You can change the planet configuration (districts & buildings, etc.). After that, you will be able to change the planet setup (districts or buildings). This will be a great boon, and a good indicator of your potential to snowball.

Typically, alien ships will be encountered by you within 15 years. You will not have any information about them or a method of communication. Most aliens are hostile toward a*similators. I usually prefer to wait for them in order to decrypt my language. Doing it myself is what I call "tempting fate."

Before they contact, it will take a few years to get in touch with you. You will need more energy districts to be able to focus on the military structures you are building. If you conquered any primitives (if they are habitable enough), feel free to relocate them around to help support these jobs.


You should also build starbases around chokepoints to direct the aliens' attention (Explanation for what a chokepoint looks like:
https://www.reddit.com/r/Stellaris/comments/fi5wzv/what_are_and_how_do_i_find_choke_points/ – [reddit.com]


Once they contact your, you should consider the type or empire. If it's an hivemind or machine-empire, you can improve relations with them and bribe them enough that it goes away. As it won't a*similate to you and it will be a resource drain for you to fight it. If it is a devouring swarm you may want to restart the game. It's best to leave it alone if you have a fallen empire. If they are organic, non-gestalt pops you're in for a treat!


Go back to the ship designer, and you can either make your ship designs or use the automated one. Now, build many military vessels with the alloys you have. Declare war by sending the ships to the chokepoint nearest your borders. After defeating all the enemy's main fleets, you may split up any remaining fleets (everything above 1.5k can usually fend themselves by this point unless your playing on high difficulty). Once they are in the same system as the enemy planets you wish, you can send armies out to conquer them. Keep going until you conquer all their worlds. Or until you run out of steam.

Woohoo! We should have at minimum doubled our population. After a few decades, all the pops should be a*similated into our workforce. You can still build the same things as before, but you can also do the same thing with your neighbors.

Ok, so it's approaching thirty year and you must evacuate your homeworld. It's not nearly as difficult as it appears.


If you conquered other universes, you likely have energy district and unity buildings. To create new jobs, distribute your pops all over these worlds. You'll only use a little bit of energy and unity compared to the total stockpiles. Here we go! Now that your empire is widely split around and distributes production and population on several different worlds, it's difficult for any empires to pin you down with just conquering a few systems; If you continue using choke points, building your military, and so on, you will soon become unstoppable.

If micromanagement bothers, you should not use the sector AI or the planetary AI. It is very bugged. Instead of building districts ahead, you might think about using your mineral stockpiles and prioritizing jobs with the population menu. You can then add buildings as the slots become available.

This build was being tested by me and my friend in a multiplayer match. I have also done this test several times previously in singleplayer. These are the stats as of 87 years ago in game. Notice the monthly resources and the number of pops (570!!! ). 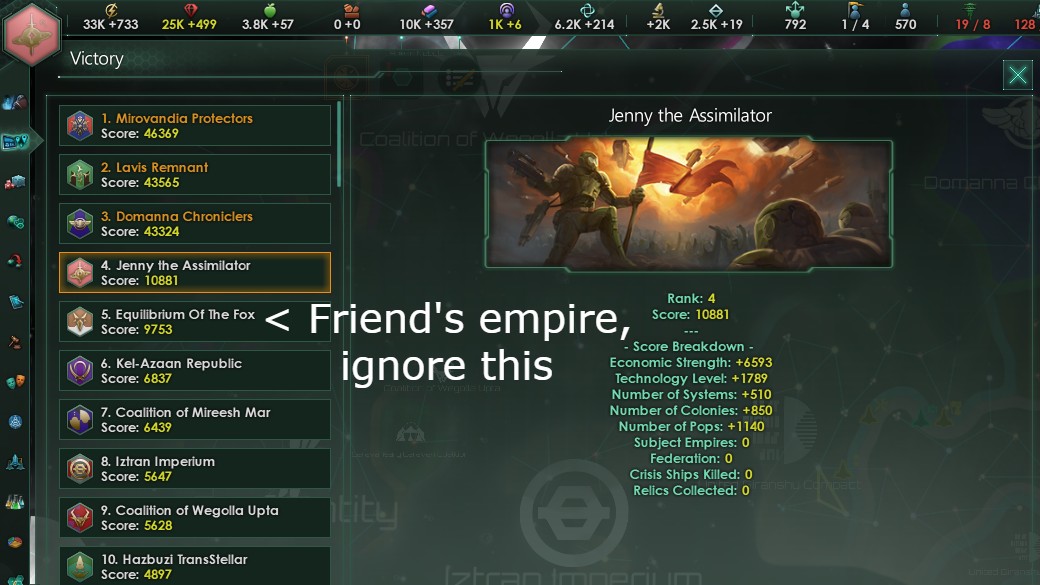 We are very grateful.

Thanks for reading! I hope that this guide will help to win your next Stellaris experience! If it was helpful, please leave positive ratings and/or awards so that more people can view this guide.


Feel free to add us if we want to chat, or play anything together.

Here we come to an end for the Highly Competitive Assimilator Guide (With Pictures) – Stellaris guide. I hope this guide has helped you with your gameplay. If you have something to add to this guide or believe we forgot some information to add, please let us know via comment! We check each comment manually by approving them!