How to get the Never Take Our Freedom! achievement in Civ V

Never Take Our Freedom! achievement requires you win the Into The Renaissance scenario as The Celts on Emperor or above.


In this scenario you exploit the significant buff to naval unit movement and embarkation.

You will also take advantage of The Celts’ +20% combat bonus over civilisations larger than her.

Purchase a scout with faith.


Unlock Honor and Warrior Code for a free Great General and a boost to building melee units.

Embark your scout into the Irish Sea.


Navigate your embarked swordsman down the Irish Sea and along the French coastline until you reach present day Bordeaux. Disembark and move SE over land until you reach the Mediterranean. Here you embark again and move eastwards to the Vatican.


Sell your resources to neighbours. Luxuries fetch 200 gold each.


Build/buy a second catapult. Send both to The Vatican.

(You may need to squat your scout on present day Plymouth to prevent England from settling there and blocking your unit movement).


Build a couple of naval units. Send one to the Vatican. The other to defend your embarked scout.

Continue to build Pictish Warriors until you reach your unit limit, sending some to Ireland.

(Even take any unescorted settlers moving north of London).


Unlock Consulates to give you friend benefits of city states.


Unlock Commerce and Mercantilism. This gives you a discount to purchase units including settlers.


Buy two settlers and settle the north of Scotland and Ireland like so (making sure at every stage you have fewer cities than England): 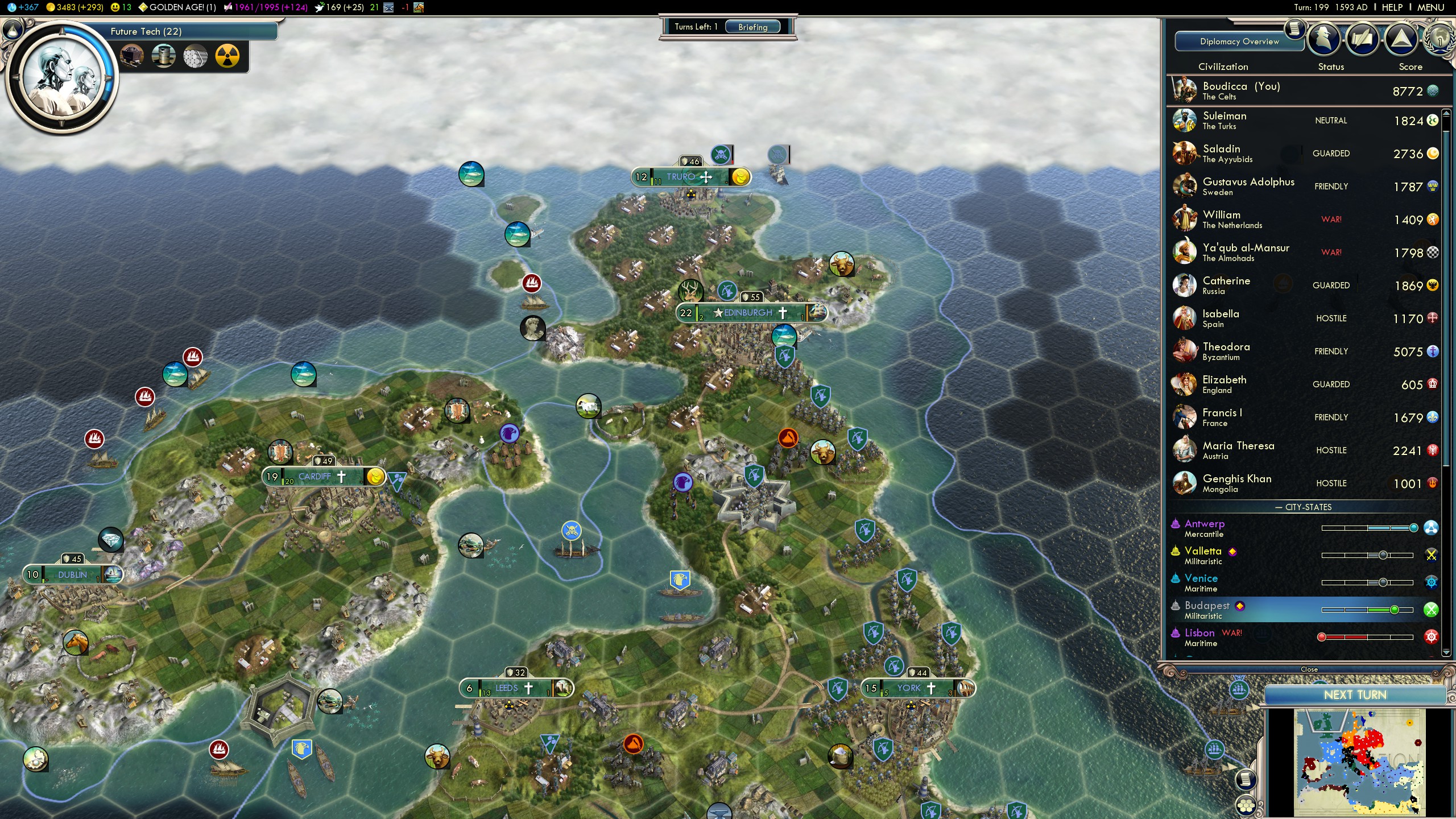 It is essential two things happen in the first act of the game:

If neither of these things happen then re-roll. (The map resources are randomised so you may well get a different outcome, as the AI will try to settle where resources are).


This allows you to make research agreements with friendly civs. The catholic civs France, The Netherlands, Sweden, Spain & Austria are good candidates.


Build a fleet of Privateers and try to capture as many English Ship of The Lines and Caravels. (Send the caravels west for easy VP).

Crusade along the African coast.


Sell cities to allies. Keep only those with strategics.


Use the gold to purchase more units from Edinburgh.

Unlike the achievement Richard The Lionheart, as The Celts there is no requirement to liberate Jerusalem. All you have to do is win.


So it depends on your play through.

If your cities convert to Protestantism then prepare for war with the Catholics and recall your navy.


Otherwise if Protestantism is extinguished in Europe you may continue your holy war.

This is all we can share for How to Achieve Never Take Our Freedom! – Sid Meier’s Civilization V for today. I hope you enjoy the guide! If you have anything to add to this guide or we forget something please let us know via comment! We check each comment! Don’t forget to check SteamClue.com for MORE!