The basics in Spaced Out rocket mechanics.

Spaced Out (SO) has the same basic game mechanics as Vanilla ONI but is seen from a different space-oriented perspective. It has a different progression than Vanilla’s “straight to making steel for rockets” goal.


Rockets can be built from metal ore and fueled by simple resources like carbon dioxide or sucrose. You could build a rocket at cycle 50 if you would like to, instead of waiting until steel is available or dupes have enough skill points to be pilots.


Only 1 spare skill point is needed in SO to make dupes capable to pilot a rocket.

Rocket modules are not separate buildings like in Vanilla.

They can only be found in the menu of a rocket platform.

After using 800kg refined metal to build a platform, any rocket engines or modules researched are unlocked and can be built on top of the platform. Everything starts from there by clicking “new rocket”. 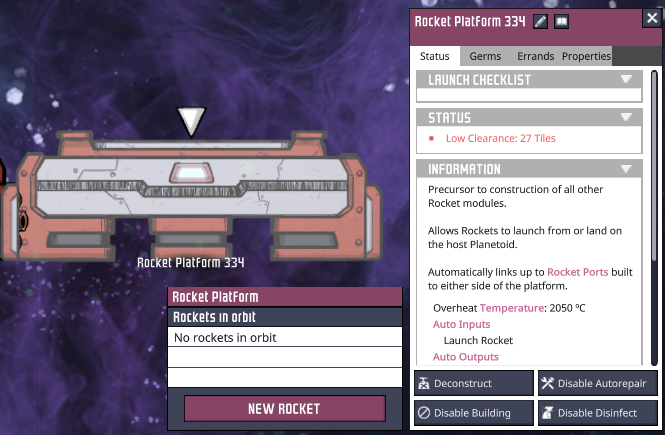 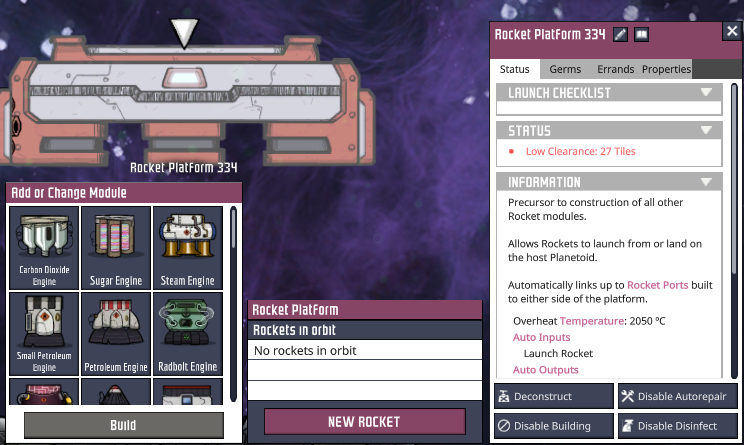 No steel is needed for the first two engines, carbon dioxide and sugar, and a small petroleum engine needs refined metal to be built. Only bigger engines will need steel.


Rocket modules are not static buildings. You can add, change or move a module up and down from the side menu when you select it.


Most rocket engines are filled directly. Only Petroleum and Hydrogen engines don’t have a direct storage and will need a fuel tank to load them with fuel.


Rockets need ports connected externally to the platform in order to fill any cargo and need fitting internally that connect their cargo to the interior of the rocket but these details are omitted on purpose in order to make this guide simplier.

What a rocket needs in order to launch is the following: 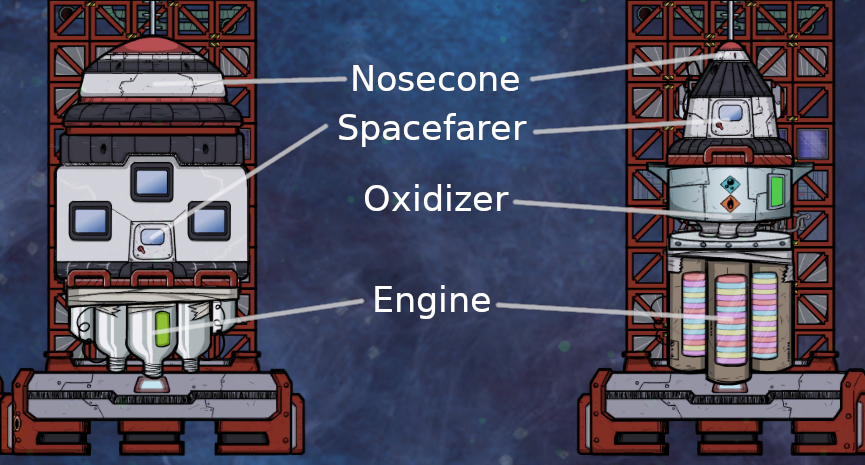 You can add any other modules after these 3 (+oxidizer) are built.

Modules are not static buildings. Any module can be built in-between by clicking a module and then clicking the + symbol to add above it or cog symbol to change it to another module.

There arrows up and down to move the module to a different position any time you want.

Note: Any inputs or outputs the modules have, will change place so you will need to be careful if you set any pipes

There are 2 options (and the “hidden” one that solo spacefarer offers).

A nosecone, the top of the rocket, can be either a Basic Nosecone or a Drillcone.

The Basic is what a spacefarer module absolutely needs. The Drillcone will be needed later on in order to drill resources from space POI.

There are two options for spacefarer modules: a Solo Spacefarer Nosecone and a Spacefarer Module.

The solo option has a small interior and comes together with the nosecone attached while the module one offers a bigger room to build but needs a nosecone attached to the top. Both options come with built-in inputs and outputs for liquid and gas.

There are 7 engines currently in game that cover different needs and preferences of players.

The first two you will come across would be:

Living quarters for the dupes


What has changed the most about rocket travel compared to Vanilla is the rocket interior. Dupes are not in suspension anymore and you will need them to survive while traveling from one planet to another. After building a spacefarer, either a solo or module one, you can see its interior by clicking at the right sidebar where asteroids and rockets are listed or by selecting the module and click at the “view interior” button.


There are two options of rocket interiors:

*A gantry is not essential to reach a spacefarer module. You can reach modules by building ladders. Ladders will obstruct building modules on top of them so make sure there are no ladders in the way when you want to build new and bigger modules


The most essentials, placed in order, you will need to have inside a rocket are:

You have several options for a sufficiently oxygenated interior

The best food to travel with is by far Berry Sludge.

It doesn’t spoil and it is so calorie dense it can make a dupe last for many cycles in long flights.

Other preferred foods would be Pickled Mealor Grubfruit Preserve because they deteriorate slower.


If the flight is not very long (less than 2 cycles), food is usually not needed, assuming the dupe ate before leaving and will find food where they are going.

Dupes are happier when they can relieve themselves and you get less annoyed if you don’t constantly have to make them mop. An outhouse inside the rocket would be enough to last a long time. Space radiation can disinfect most germs, so they don’t even need to wash their hands afterwards

Seems like a luxury but after a while, any dupe needs some comforts. The bigger module can fit a bed and even a great hall if you like. That way long trips will get less stressful for your dupes.

Example of a solo interior 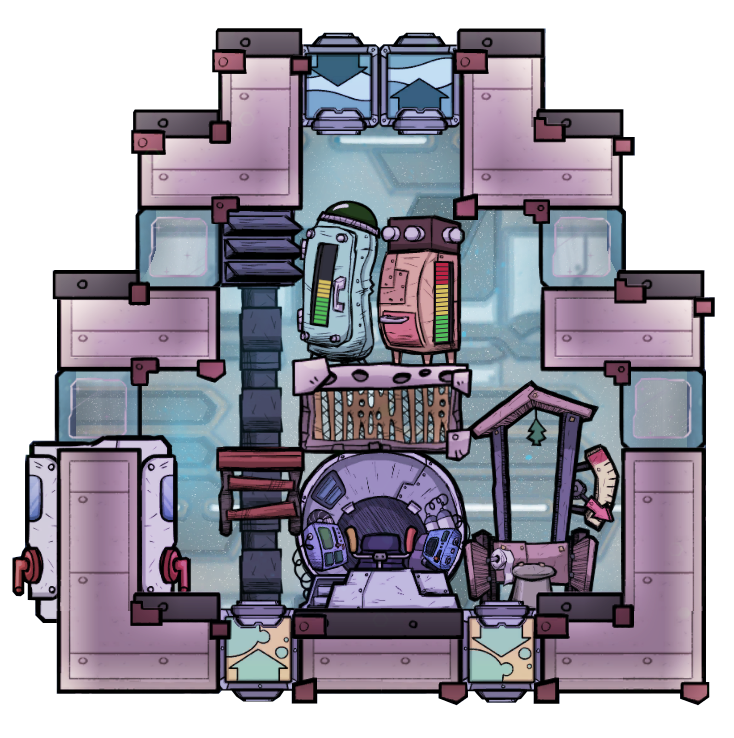 An outhouse, a fridge to put 10-20kg of preferred food, a gas pipe and vent to oxygenate the interior and a storage bin for oxylite to have some spare oxygen

(I would usually put 1000kg oxylite just in case.. I forget a dupe for several cycles)


The rocket control station can be deconstructed and built on a different place in the interior. You can arrange things any other way you want or fit more/different buildings than this example

The first two most simple rockets you could build, are the ones using the Sugar engine or the Carbon Dioxide (CO2) engine which consume sucrose and CO2 respectively.


Sucrose can be usually found and mined on the starting asteroid or produced from sweetles after they eat sulfur.

CO2 can be generated by dupes or buildings and usually is a plentiful resource in any asteroid.


A simple rocket to transport dupes between planetoids would look like this: 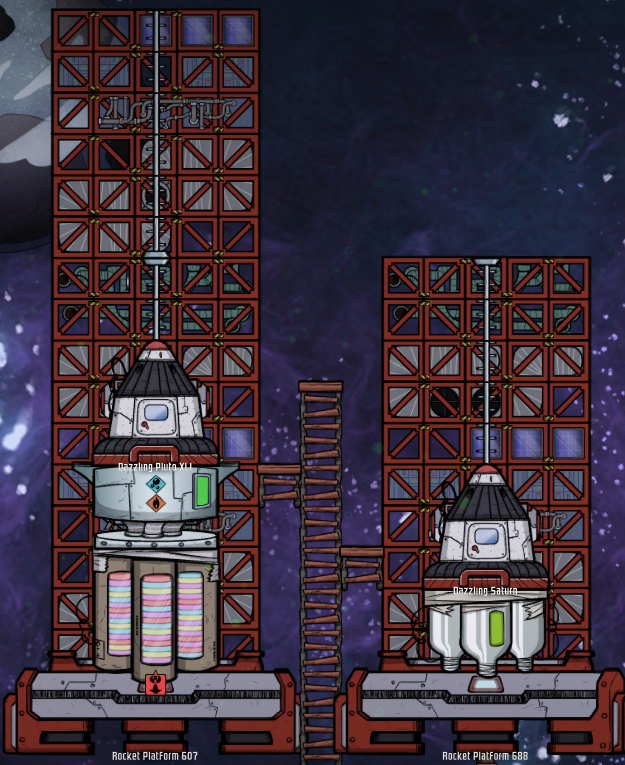 The background scaffold starts unraveling when an engine is built and that scaffold reveals how tall a rocket can be using that engine. Spacefarer contains the rocket control station and the living quarters of the pilot/crew of the rocket. In order to pilot a rocket a dupe needs the “rocket piloting” skill.


In order to start sending rockets to destinations (apart from the essentials inside a rocket so your dupe doesn’t suffocate/starve) after filling them up with fuel, you will need to assign a pilot and any other crew you want … 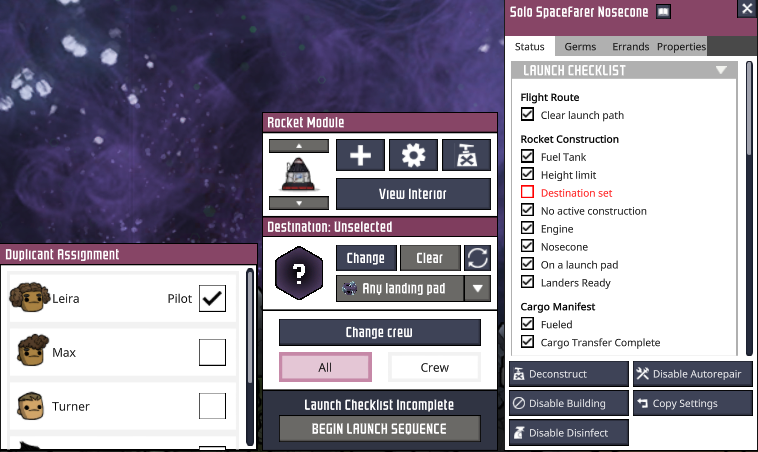 …choose a destination the rocket can reach on the starmap and…launch! 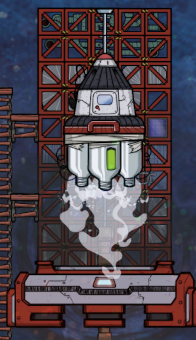 *Launching rockets back and forth will require to have rocket platforms in both destinations.


*Having a last look at the launch checklist before launching, will let you see if anything is wrong. If a cargo module is not fully filled or a lander is not built, there will be a warning/unchecked box in the checklist.


*Roundtrip should not be activated if you want to launch anything from the orbit of a planet like a rover or trailblazer. It’s useful if you want to drop materials from an orbital cargo module, otherwise it should be deactivated.

Landing on a planet

You can land on a planet several ways.

After you land a dupe on the planet you can build a Rocket Platform(800kg refined metal) from which you will launch and land rockets in the future. Only dupes can build a platform and the only way to leave the planet is a rocket.


You can use Rovers to make a path to better oxygenated areas and build the most essential for a temporary base but rovers can’t build a rocket platform or more complex buildings. Rovers can’t dig granite or harder materials so landing a rover in some asteroids will not prove very useful.


Landing a dupe using the trailblazer or crash-landing a dupe using “Abandon Ship”, will just drop the dupe in the surface of the asteroid and you will need to figure out how you will survive from there. Dupes landing will not have an atmosuit unless you put them in one before launch

Rockets in SO are totally different than Vanilla. For me, it makes the game more interesting to explore.


Many of the mechanics and exploits that can be used to land and establish a colony are omitted in order to make this guide an introduction to Spaced Out rocket basic mechanics.

Here we come to an end for the How to Rocket in a Spaced Out galaxy: The basics – Oxygen Not Included guide. I hope this guide has helped you with your gameplay. If you have something to add to this guide or believe we forgot some information to add, please let us know via comment! We check each comment manually by approving them!