Using a lot of numbers and math to compare and contrast each pistol and ammo type in order to determine which is best and why. Combined with my roughly 35 hours+ in the game using just pistols I hope this serves as a guide for anyone confused about what pistol or ammo they should be using.

“What pistol should I spend my valuable money on?”


“What ammo should I be using with pistols?”


Some very simple questions that I’ll answer with some overcomplicated math as well as my 35+ hours of experience running pretty much just pistols.


If you want a more digestible explanation of the guide and tier list I created, here’s a video explanation:


All the pistols (minus PM and GSH) however are viable SIDEARMS with P+ (don’t use AP) and a suppressor, so just use whatever pistol you want, each pistol is ranked in comparison to one another, here is a short summary of why each pistol is in each spot. 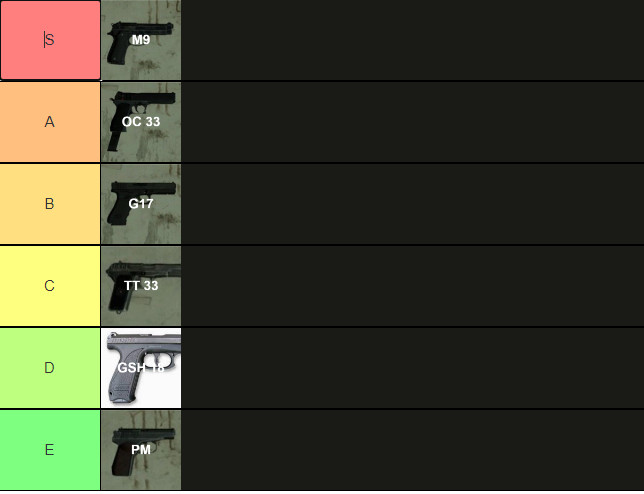 
The M9 has the highest damage and accuracy of all the pistols and is meta, it packs a lot of punch and can accurately hit all it’s shots.


The OC33 is the best CQC pistol in the game due to its ROF but terrible at range as it’s single-shot damage and accuracy is low.


The G17 is a higher damaging semi-auto version of the OC33 but has the worst accuracy in the game so it’s a CQC bandit.


The TT has the same muzzle velocity as the SKS but does more damage than it so it can be used at long range but it’s lack of scopes and mid tier accuracy make it a gamble. (It’s actually OP I love using it as a sniper)


The PM is dog water.


The GSH 18 is a more accurate bigger mag bowl of dog water.

Before we begin comparing pistols we must first get all the stats together and declare once and for all the best ammo type.


There is spreadsheet that goes into a lot of detail on a bunch of stats in the game that I deem are completely unnecessary and irrelevant when it comes to comparing weapons.


Sadly I can’t post links to it for some reason.


So I made my own spreadsheet using the numbers, but with only the useful stats as well as many corrections as all the data for P+ is wrong.

As you can see, it’s a lot smaller and more digestible as I removed a couple of stats that are arguable useless, mainly…


Reliability and Wear Per Shot:


Both stats are countered by just carrying around a cleaning rod and making sure you maintain your guns. So it made complete sense to remove those stats from the table. 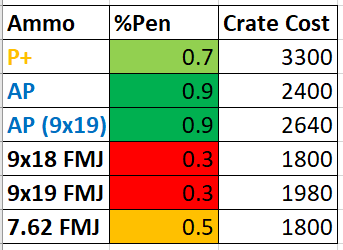 As we all should know FMJ and SS are terrible. So it’s time to compare AP and P+.


Using FMJ as a base value for comparison sake, AP does 10% less damage than FMJ, however has a 90% chance to penetrate through armor. Which makes it almost a guaranteed penetration. It costs between $2400-2640 depending on what rounds you purchase with 9×19 costing the most.


Now I learned this in high school and what’s crazy is how this is the first time I’ve used it outside of school, so take that whoever said we were learning this for no reason.


I won’t bore everyone with the details so I’ll just give us the numbers.


If we take the G17, and load it with AP, we have 17 bullets loaded, each with a 90% penetration chance. With that in mind, we can calculate the probability that any number of bullets penetrate. The same can be done with P+’s 70% pen chance. 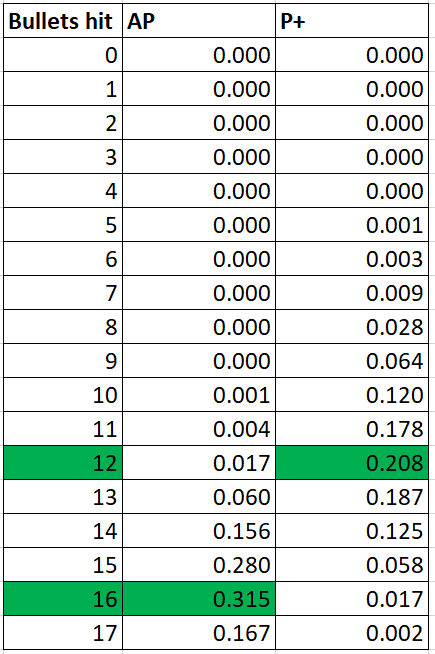 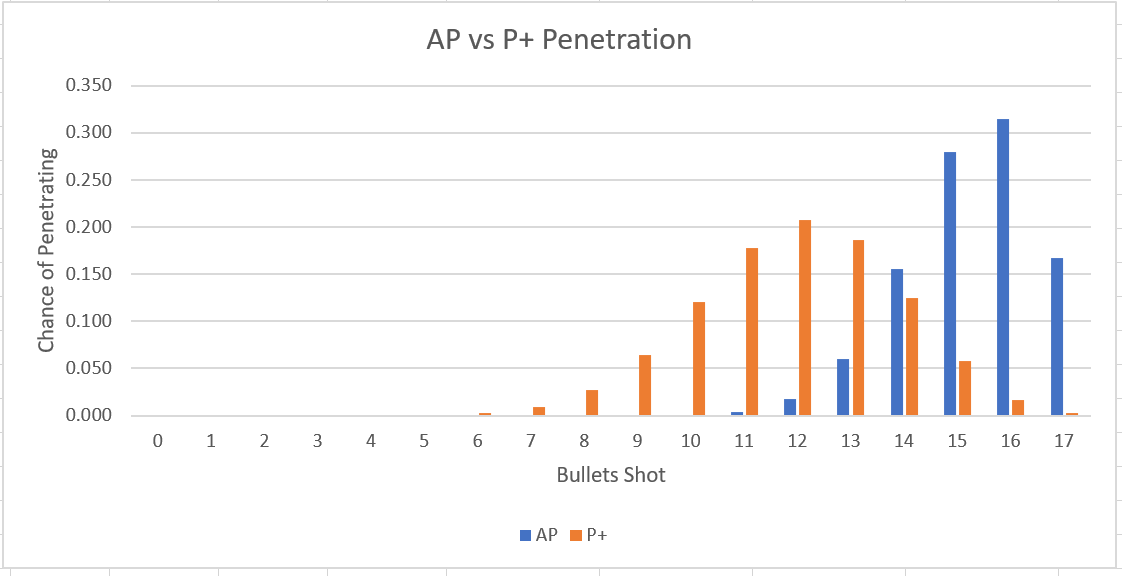 A more visually appealing version of the numbers.

Any pistol with 40 damage or less per shot can’t kill armored units quick enough to justify it’s use, but the OC 33 is an exception. So that rules out the PM and GSH 18.


Now to compare each pistol based on the stats above:


It doesn’t excel at anything and has really moderate damage. It’s literally just a buffed PM. There’s a saying I know and it goes something like this, “if you’re okay at everything you’re not good at anything” – Someone. D Tier.


The TT is so interesting as it’s tied for second-most damage with the Glock and has a wicked fast muzzle velocity. Making it a sniper rifle. I understand it has low accuracy but if you roll the dice you can snipe with it. I personally have a lot of fun running around with this thing trying to snipe. If it had a bigger mag it would be a long-range G17 and an easy B tier. But sadly it’s C Tier.


I hate this gun, but bias aside, it’s tied with the TT for second-most damage but has such ♥♥♥♥♥♥♥ accuracy that you can only use it for CQC. It’s also got a pretty nice mag size so it’s a good pick for CQC just don’t try to use it long range. A solid recommendation. B Tier.


If you want to run a loadout with a traditional primary use this as your secondary. This thing has the highest DPS out of all the pistols and is the best CQC pistol in the game. But it can only do CQC which is a problem and you tend to overspray with it a lot costing you valuable $$$. So it’s A Tier.


Highest accuracy, highest damage and most economical. S Tier. Use this thing. I don’t need to explain its greatness.


As I said at the start use whatever pistol you want, this post serves as a guide for anyone who wanted to know what pistol to run as a primary (like myself) or wanted to save money instead of buying every pistol to test them. Don’t let this guide influence your pistol choice or change what you run, this is just a guide to give you the numbers and prove why each pistol is comparatively better or worse than other pistols.

I hope you enjoy the In Depth Tier List and Guide For The Pistols and Their Ammo – Into the Radius VR guide. This is all for now! If you have something to add to this guide or forget to add some information, please let us know via comment! We check each comment manually!