A basic overview of a cheap (literally and figuratively) tactic to help you through your Kislev Campaigns.

Something magical happened the first time I played a Kislev Army with Little Grom units. I was careless and left them isolated on a hill, so a unit of furies swooped in to attack. I’m usually careful, but it happens, every now and then you lose your artillery while you’re busy trying to manage the army. Exasperated, I’m wondering if I can still win the battle without my big gun, all but writing it off as lost, when I hear the distinctive sound of shelling.


Warhammer Total War 3 gives us artillery that is mobile and tanky, covering its typical weaknesses to yield an incredibly effective little unit. With a little help from your frost witches, it is perfectly viable to spam en mass, and has the stats to make a formidable doomstack.


To start you’re going to want unlock the Ice court ASAP. I highly recommend unlocking the Lord slot first, getting it early lets you skip over Boyars for a much more useful Leader for your army in the short term. Long term you’re going to fill up your hero slots fairly quick, but an extra lord with our desired trait is essentially always useful.


The trait we’re looking for is Artillerist, of course, for its -30% upkeep for Little Grom units. That is insane. It also stacks. That means if you have 3 frost witches with artillerist, and a couple of recruit cost skill nodes, your artillery is free to maintain. That means with 2 frost witches (ideally 1 lord and 1 hero), your Little Grom units are cheaper than most of your infantry. 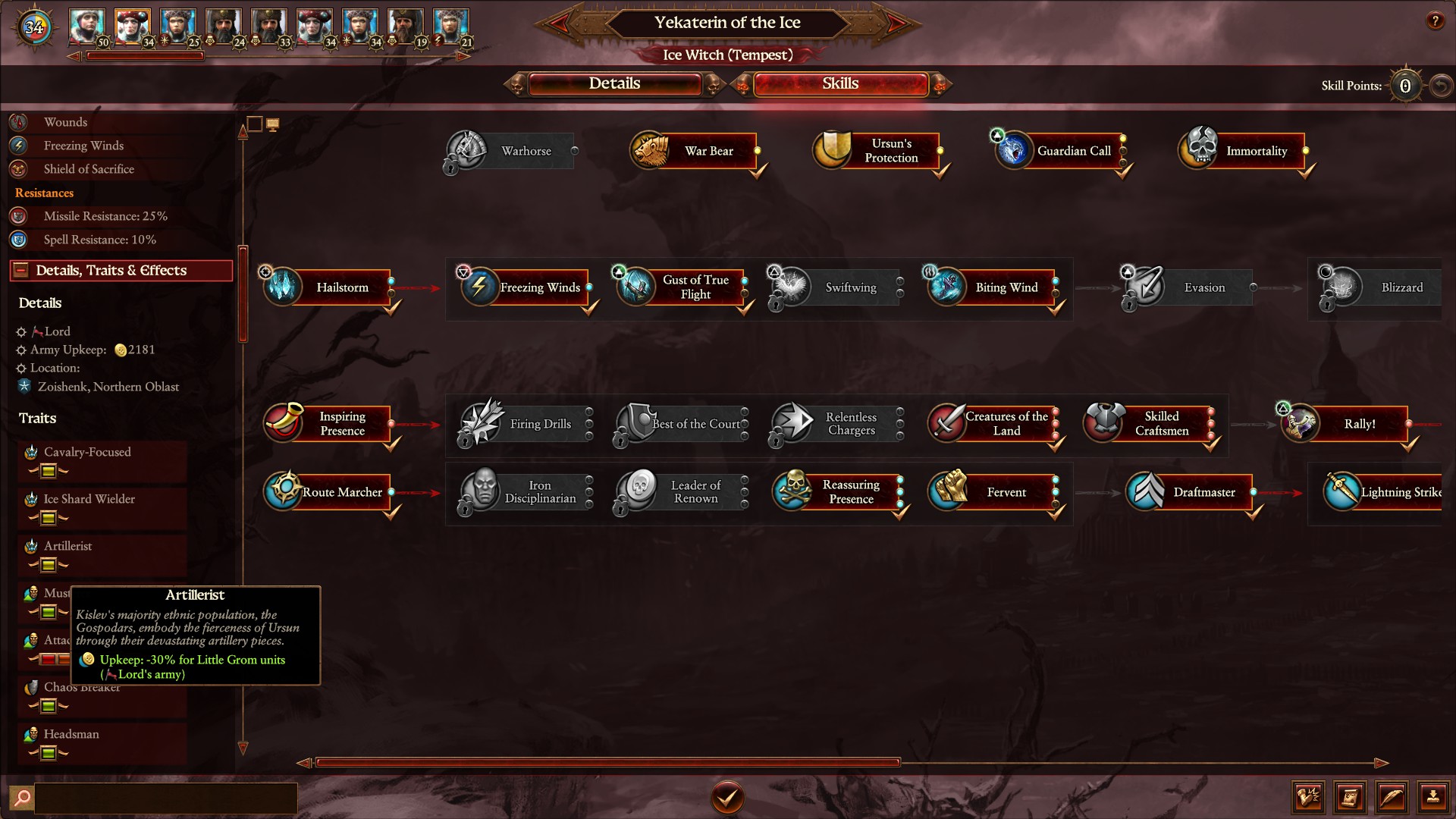 Aside from that, pick anything that buffs ranged attacks or cavalry and you can’t go wrong. You’re probably going to have to recruit a lot of ice-witches that will never get used to acummulate some with the correct traits, but they are worth it when you get these beastly armies on the field and see them in action. 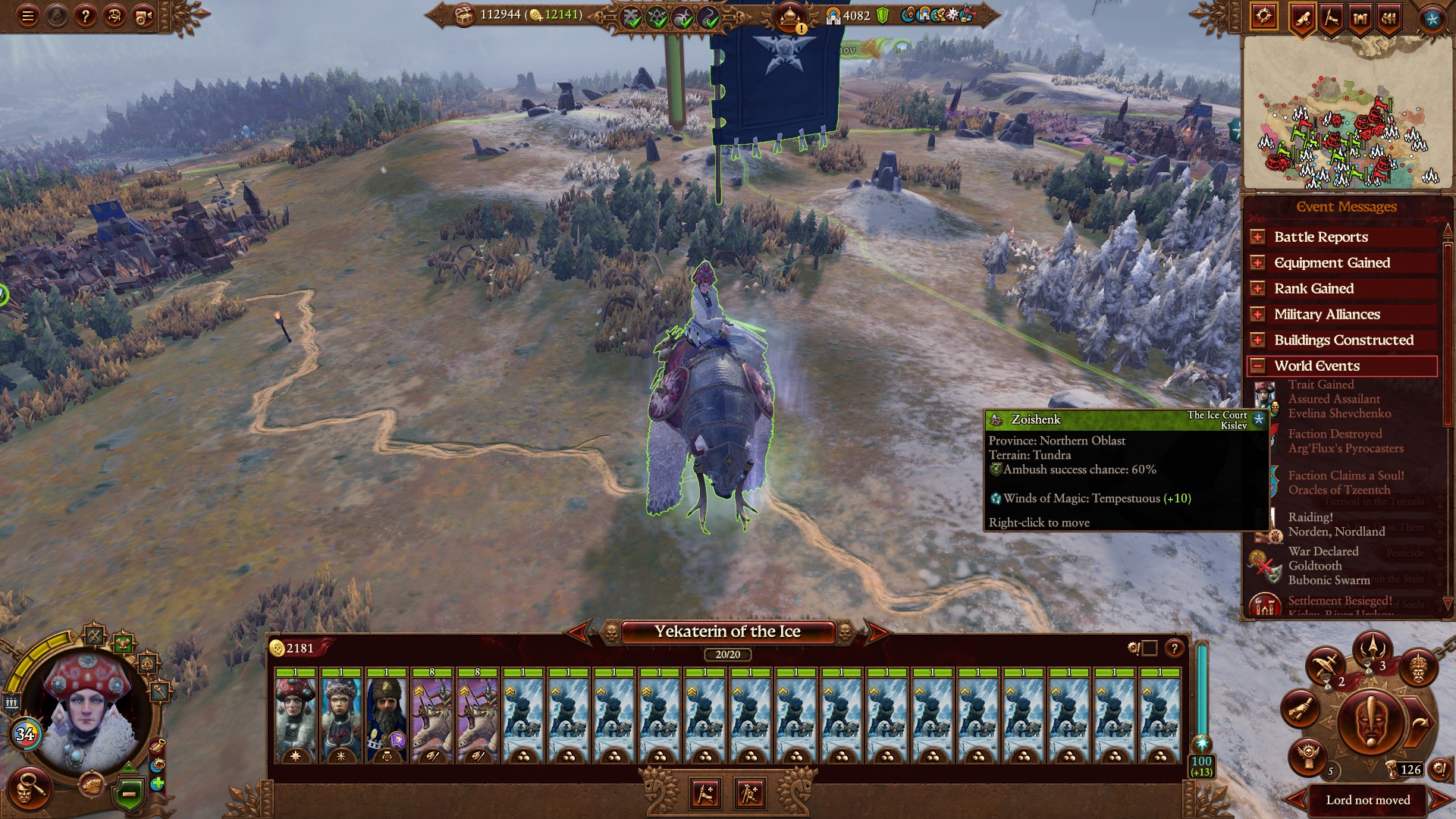 Composition is simple enough. Your standard army should have 2 frost witches with Artillerist, and whatever other useful traits you can roll on them. Preferably 1 Lord and 1 hero, but it’s not the end of the world if you need to use 2 heroes until you can roll another lord with the right trait. You also need at least 1 Patriarch, with the healing aura. I go with 15 artillery pieces, because I like to have groups of 5. That leaves 1-2 slots for you to fill. Another Patriarch can work very well, just be careful the first few battles while you level them if you have to make one from scratch. Otherwise a couple units of bear cavalry are mobile and sturdy enough to help with most threats, with some useful anti-large to boot. Bear cav does make things expensive, but plain horse cav or infantry work on a budget; they just aren’t as cool as a 100% bear-based army. Bearmy? No, that’s silly. It’s obviously a Bearforce. 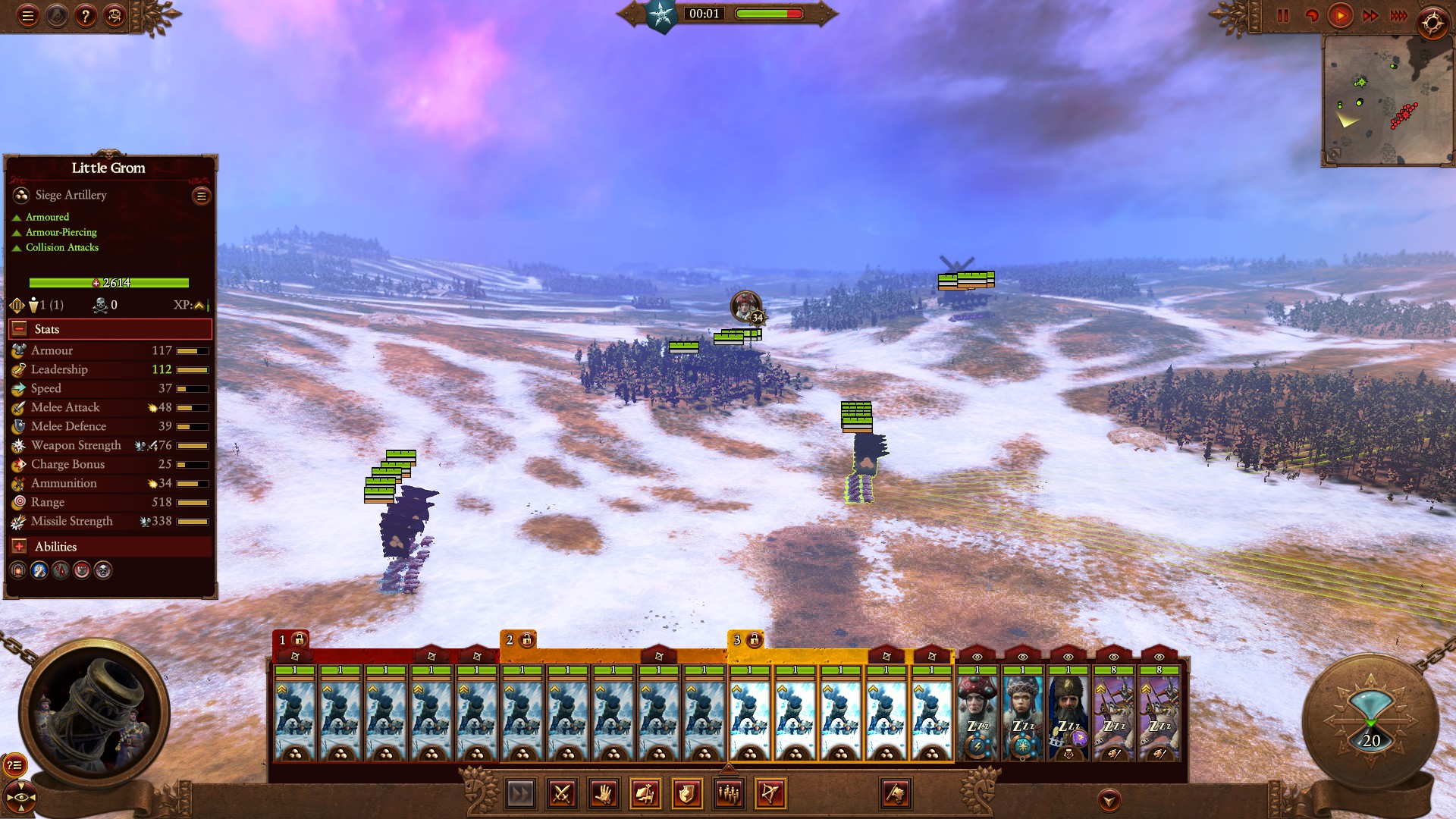 When it comes to tactics, you want a formation similar to what I’ve depicted above. Your artillery should form a triangle, with one unit clearly in front of the others, and the lords and cavalry somewhere in the middle, ready to respond to threats as the need arises.


You start shelling as soon as the battle starts. Sometimes that’s enough. Sometimes the enemy is going to reach one of your groups of five guns. Continue to shell with your other units, and send your cavalry to help. Your Partiarch’s heal is insane on little Grom units since they’re a single unit with a high health pool. They’re a wonderful anvil for you to hammer and shoot your enemies on until they break.


If you’re using infantry instead the setup is similar, but the infantry aren’t fast enough to respond to threats on the fly, so you put them in front of the forward battery and let them soak up the first round of casualties. If your opponent is using mostly infantry, your bears are probably faster, so instead of letting the front guns tank, you can make them run around while the other two keep firing. Occasionally they’ll get harassed by cav or flying units, but that typically just means a small break and a quick snack for your bears; they win melee battles against chaff like furies pretty quickly, and hold their own against tougher units.

And that’s it! I could probably expand this a bit to talk about how to efficiently get to the stage of the game where you can recruit Little Grom units, but I think Kislev is pretty straightforward. If you really need help, there are other guides for that. I just wanted to do a quick write-up for this specific strategy, because I haven’t seen it in the other guides yet, and it has worked incredibly well for me.


Thanks for reading my stuff! Feel free to leave feedback, I hope this helps someone!

This is all we can share for Kislev’s Ridiculous Beartillery Strategy – Total War: WARHAMMER III for today. I hope you enjoy the guide! If you have anything to add to this guide or we forget something please let us know via comment! We check each comment! Don’t forget to check SteamClue.com for MORE!