Kaycee’s Mod is in beta, so things might change. This guide was written for V0.25.

In the later maps of Kaycee’s Mod, the biggest killer is deck size. With all challenges enabled, you’ll encounter combinations that can wipe you in a single turn, like Double Strike or Bifurcation totems. And it only takes a few superfluous cards to give you an unplayable starting hand.

Unfortunately, there’s very little that you can do to mitigate this. So you really need to prioritize the few things you can control about deck size.

Maps are generated in a way such that you have a choice of paths, but all paths will add/subtract the same number of cards. However, this balancing doesn’t account for some events being failable.

Bone Altars consume a card, and then you’ll get an extra bone at the start of each map (or 4 if you sacrificed a Black Goat).

Not much to say here. There’s no trick to these.

Deck Trials will award a selection of cards with sigils already imbued if you can pass your choice of trial. However, you can fail Deck Trials and avoid taking a card.

These are the trials you can be offered:

The way to mitigate this is to try and cultivate certain weaknesses in your deck in order to fail trials more consistently. Personally, I try to limit the number of bone cards in my deck. But your deck may have generally low health or low blood or mismatched kin, and you should try to keep it that way when picking cards.

Campfires allow you to increase the power or health of your cards. However, if you get greedy you can sometimes fail Campfires and lose a card.

For this reason, it’s worth considering not murdering the Campers with Ring Worm/Touch of Death in the first map. Risk-free double power increases are extremely enticing but, in my experience, you rarely need more than 6 power on any card, and only on a few cards.

Unfortunately, while there is a mechanism to ensure success at campfires, there is no mechanism to ensure failure. You might be able to shed your excess cards, or you might accidentally give them huge power/health. When picking cards to feed to the campers, consider what your options are if the card survives.

Similar to how some events can be failed to great success, some other events have alternative behaviours to ensure you accidentally get screwed over.

Under normal circumstances, Mycologists will consume a card. However, if you have no duplicates you will be forced to take one.

The duplicates offered will be of three random cards in your deck. You can try to use this effect to your favour (it’s always nice to draw another Geck) but it’s usually not worth pushing your luck (you’ll probably wind up duplicating trash).

The way to migitate this is, obviously, to try to draw duplicates ahead of time. It’s just a factor to keep in mind when weighing the relative value of cards when you’re forced to pick one.

Under normal circumstances, Mysterious Stones will consume a card. However, if you don’t have two suitable cards the stones will have no effect.

This is usually avoidable though — try to look ahead in maps before starting battles to see if you’ll need to burn an item.

What else can you do? 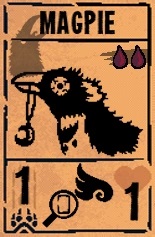 The Hoarder sigil allows to you draw any card from your deck, completely nullifying the challenges of an oversized deck. This makes Magpie one of the most valuable cards in the game.

Magpie itself is a little expensive to summon at 2 blood. This makes it a prime candidate for Mysterious Stones.

The Hoarder sigil is also a prime candidate for the new Goo event — put Hoarder onto a zero cost card, clone that card, now you can chain summon both of them for twice as much blood. 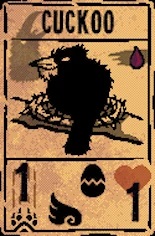 The obvious way to mitigate a large deck is stalling. The best stalling card is Cuckoo — its Brood Parasite sigil allows you to effectively block an entire lane by summoning something useless on Leshy’s side.

Cuckoos cost 1 blood and give 1 blood, so they are playable right out of the box. But the sigils are the important bit, so feel free to sacrifice them onto other cheap cards if you land on an extra Mysterious Stones.

If you accidentally summon a Raven, you’ll take a net loss of 1 damage per turn. This is usually easy to manage, but keep it in mind before playing Cuckoo. 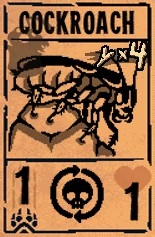 Another stalling strategy that can lock down an entire lane. The Cockroach’s Unkillable sigil gives you another copy of the card if it dies. The Corpse Maggot’s Corpse Eater sigils automatically play the card when another card dies. These sigils work together to create a card that automatically replays itself when it dies.

There are a few issues with this combination, however:

But there are also advantages over Cuckoo:

Other than Corpse Maggots, Unkillable works well on most cheap cards. Two standouts are Bullfrog and Mole — 1 blood cards with good defensive sigils. The primary issue with these is that you need to feed the cost of resummoning each turn, and it may be difficult to keep drawing Aquasquirrels instead of drawing your main deck for the card you actually need.

Here we come to an end for the Managing deck size in Kaycee’s Mod – Inscryption guide. I hope this guide has helped you with your gameplay. If you have something to add to this guide or believe we forgot some information to add, please let us know via comment! We check each comment manually by approving them!