Extensive and detailed guide for creating new relics or modifying existing relics in The Hand of Merlin, written by its game designer Mat.

Hello! I’m Mat, Game designer for The Hand of Merlin. Now that our editor is available to the wider public, I’d like to write up a few guides on how to create some content in our game for your modding purposes.


In this guide, We’ll talk about implementing Relics!


As an example, we’ll create Gla*s Arrow, a Common relic. 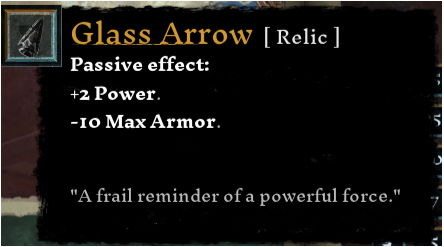 What is a Relic?

A relic is an equippable item that grants the bearer with some sort of boost. It can be a pa*sive attribute increase, the access to an ability, all sorts of things.


They are found in encounters as random or specific rewards, and can also be bought in Relic Shops, found in most cities in The Hand of Merlin.


To start the creation process, let’s use the Create Menu (Ctrl+N as a hotkey), and create a new Relic Parameter. 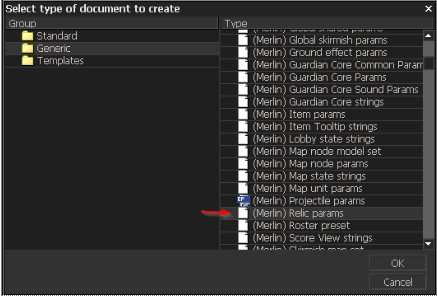 This should be the file you’re greeted with: 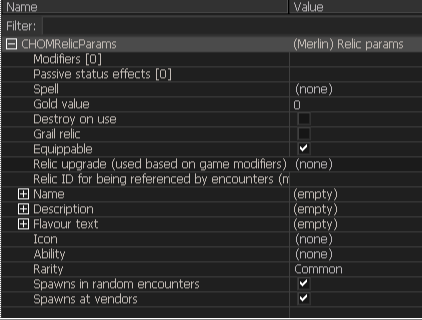 Then, make sure you save the new file in the Content\Merlin\Relics folder, to let the game know that your relic exists.

So, three things we’ll set up first. The Relic’s Name, Flavor, and Description.

Name is just your relic’s name. Think of something fancy. We’ll go with Gla*s Arrow for ours.


Description is where you’ll describe what the relic does. You can use the tags we talked about in the Abilities guide, but here’s exactly what the text is for Gla*s Arrow, as an example:


The {Attribute Modifier[X]} stuff will be filled in in the future dynamically when we actually set attribute properties to the relic.


Because these are text properties, you have two fill in two fields: the Identifier and the String. This is to make it easier for translations. If you are making a big mod, you might want to have your own identifier naming conventions, but here’s mine: I use HOM.Relic[RelicName].[Category], where Category is Name, Description or Flavour.


Then, you can set up an icon. Remember that we use .tex files, that you can create from your own PNGs by using the Texture > Create menu (CTRL+SHIFT+T).

A huge aspect of configuring a new Relic is how exactly are players supposed to acquire it.


Rarity is its category. This does very little on its own, but `Common` and `Rare` relics can be found in shops (2:1 in most cases), and can be randomly granted in some encounters, including the first one, Camelot. `Unique` we tend to leave to those a*sociated with specific encounters, and `Legendary` is a category we leave for the Grail and the Horn, and its variations.


Gold Cost is the base price of this relic in shops, expressed in gold. Note that some encounters offer discounts to the shops.

Equipping a Relic allows the bearer to gain access to a series of modifiers, both active and pa*sive.


Status Effects are pa*sive effects granted by just having the relic equipped. They are granted at the beginning of a match, so if your effect has a decay rule (like Powerful or Vulnerable), they will be lost over the duration of the match, only to be replenished at the start of the next one.


Attribute Modifiers are far simpler. These are alterations to a unit’s base attributes, like Poweror Max Armor. We’ll focus on this one for Gla*s Arrow. It’ll look like this: 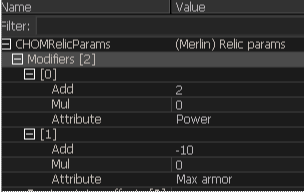 This is what will be filled in the description, as we talked about in the previous section.


Ability describes the ability a*sociated with this Relic. We call relics with this property “Action Relics”, and it’s great for versatility. These can be any ability really, but we usually make 0 AP ones for relics, so keep that in mind if you are looking for something to fit vanilla gameplay.


Spell is like Ability, but here you’ll browse a Spell Parameter, which has some UI information regarding the spell. Also note that adding a Spell to a relic allows anyone to use it, as spells are considered “outside” the unit.


Equippable determines if the item can be equipped, or it must stay on the stash. If your relic has a spell or a status effect and is non-equippable, the game a*sumes that it should apply that effect to everyone, so keep that in mind.


Grail, Upgrade and ID: these are some smaller properties that we use for some unique behavior.

Relics are a great simple addition to test your modding chops. Good luck!

Here we come to an end for the Modding Guide – Relics – The Hand of Merlin guide. I hope this guide has helped you with your gameplay. If you have something to add to this guide or believe we forgot some information to add, please let us know via comment! We check each comment manually by approving them!