Mods are a new progression mechanic in Warface. They allow you to change the characteristics of any primary or secondary Vendor weapon by applying special bonuses.

You can see the complete list of modifications in the dedicated game menu. To go to it, open your Inventory, select a permanent item and click on the corresponding button located to its right. After that, you will be taken to the modifications interface. 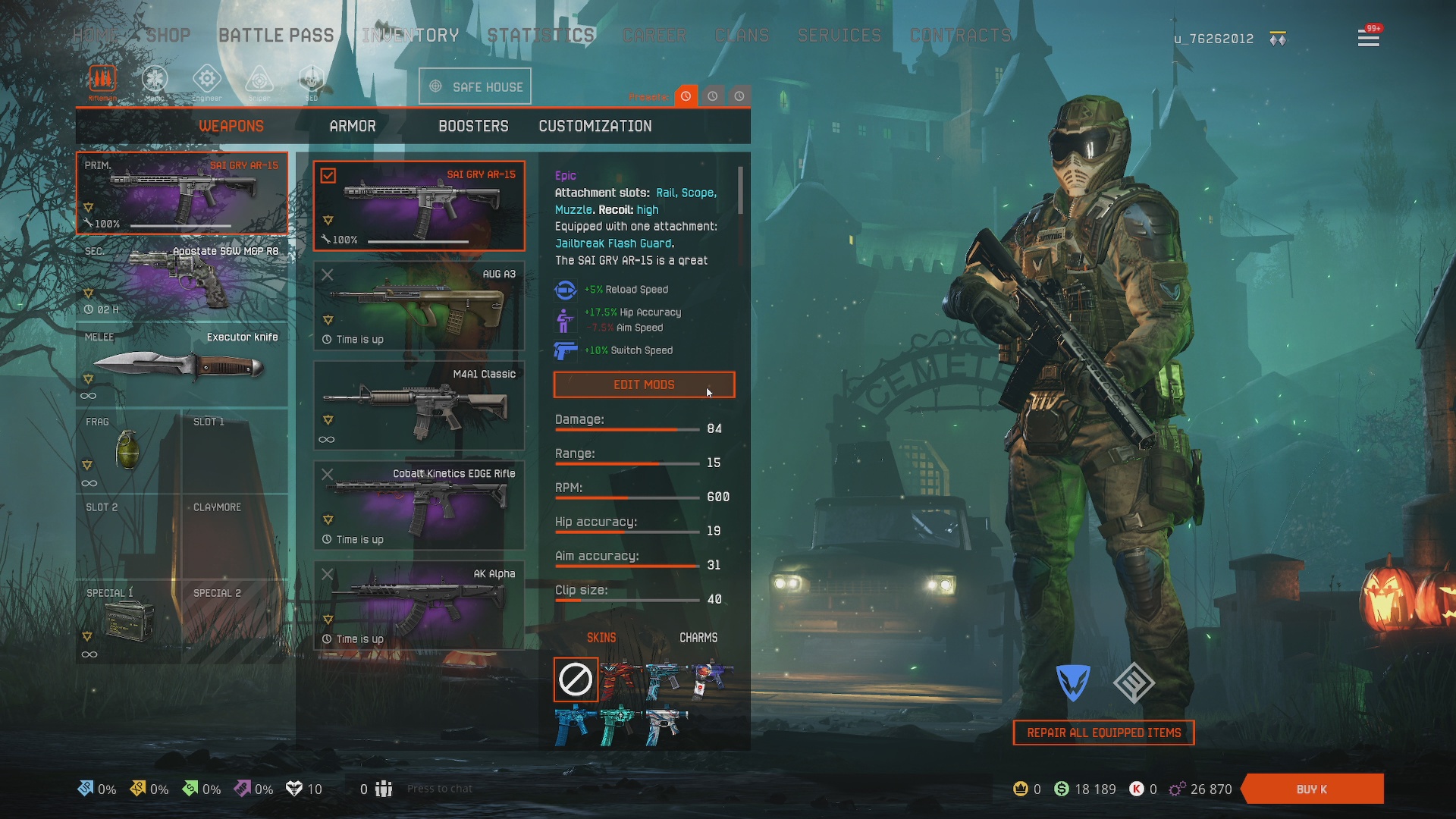 You can install up to three mods on each model of a primary or a secondary weapon. Mod slots will open gradually as new mastery levels unlock. 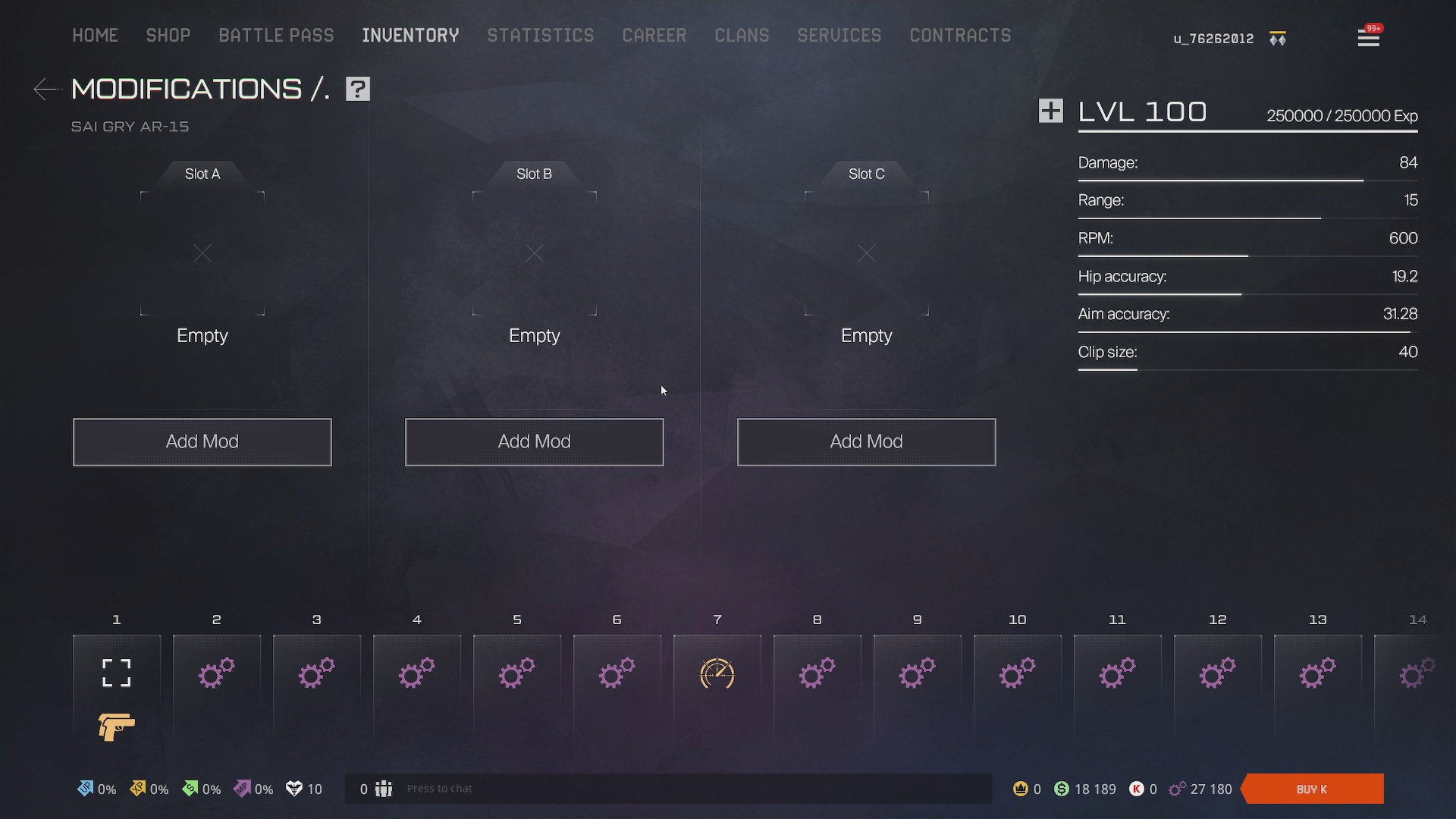 Each weapon type has its own set of mods. So the shotgun mods will differ from the assault rifle mod kit.

Each mod type has several levels of value, ranging from common to legendary. There are five levels in total. The higher the level, the more difficult it is to obtain.

With an increase in rarity, the effectiveness of the mod increases as well, but, the influence of the balancing negative effect also rises. For example, let’s say the mod N increases the ammunition capacity. In that case, the stronger the effect, the more the character loses movement speed: the fighter’s equipment weighs more because of the increased number of cartridges. 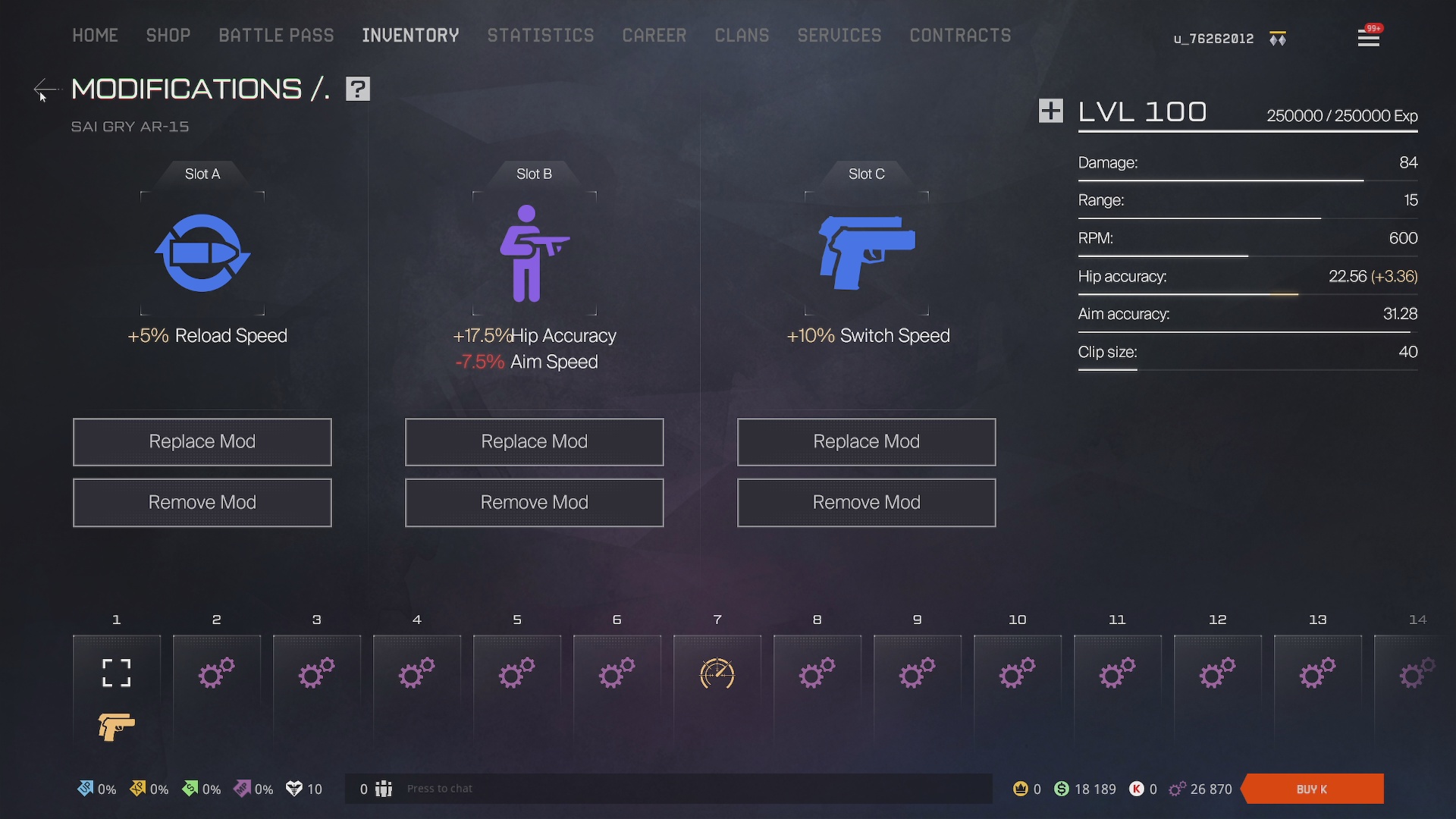 Some mods do not have balancing negative effects.

WHAT WEAPONS CAN BE MODIFIED

Not all weapons in the game can be modified, in order to avoid an imbalance of powerful guns. Mod bonuses will vary depending on the weapon category.

Perhaps future weapons designed for the modification system will receive a new type of rarity. Arms of this category will not be stronger than the best weapons in the game, but, they will be competitive and comfortable to play with.

HOW TO GET MODIFICATIONS

You need to select the weapon boost in the Inventory and play with it. The more you play, the more mastery you will accumulate. The higher the mastery level, the more mods will become available, and the higher their quality will be.


At the end of each match, you get a certain amount of mastery points. The special currency for generating mods can be obtained in several ways, for example, by increasing the mastery level of an item or as a reward for completing special contracts that will be available for in-game currency in the future.


Modifications and parts are received depending on the mastery level as additional rewards for game sessions. Thus, the advantage can be obtained solely by spending time in the game without any additional investment. 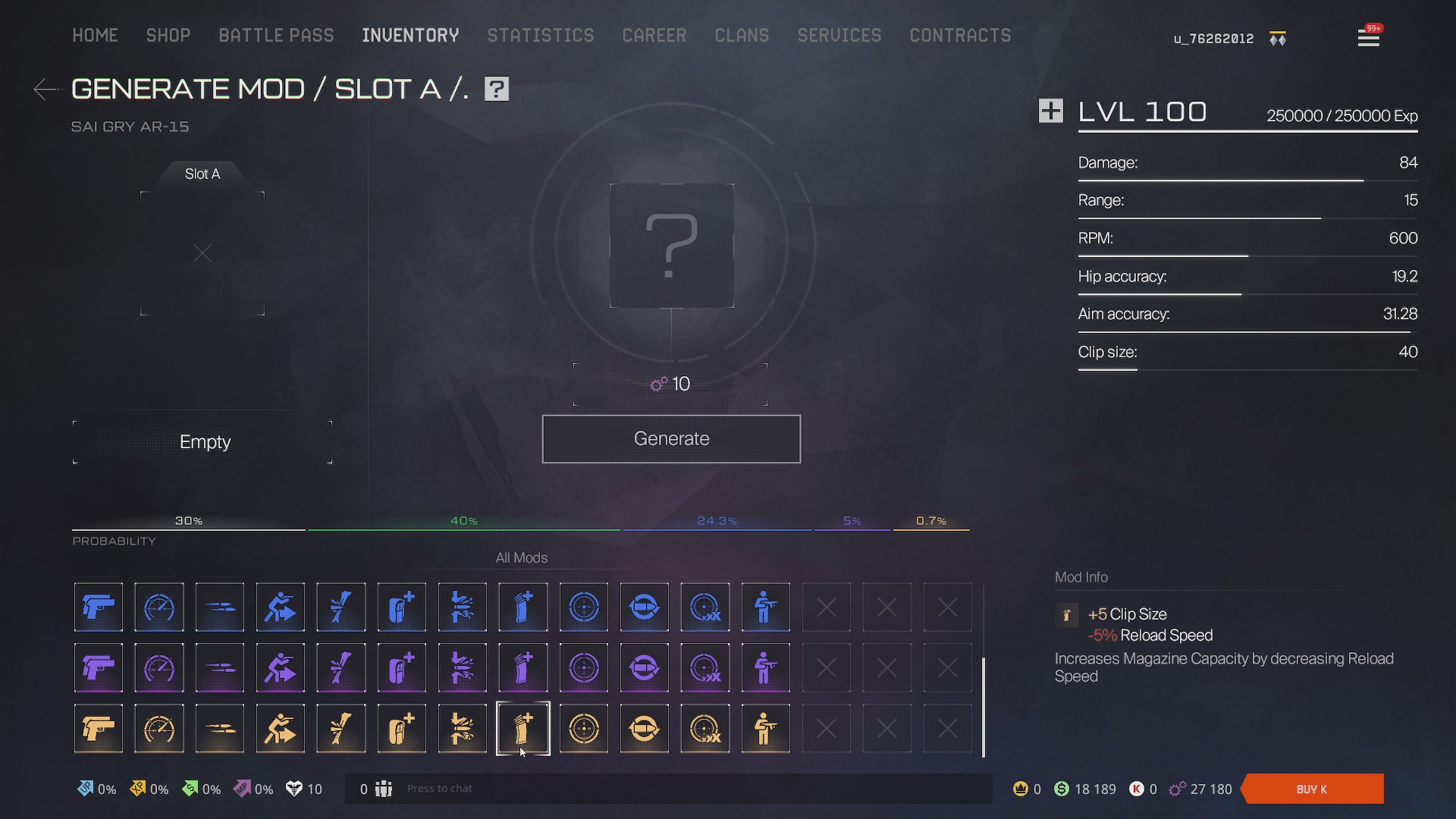 That being said, the best set of modifications will not be readily available. To get it, you will need to upgrade weapons, participate in many battles, and complete daily tasks.


The time required to upgrade a weapon depends on the item. Some guns will upgrade faster than their more powerful counterparts.

THE SUCCESS RATE OF CREATING A MODIFICATION

After a series of unsuccessful attempts, the chances of getting the mod will start to increase:

Please note: if a high-level mod is already inserted in the slot, the old one will be destroyed when you try to insert a new one. 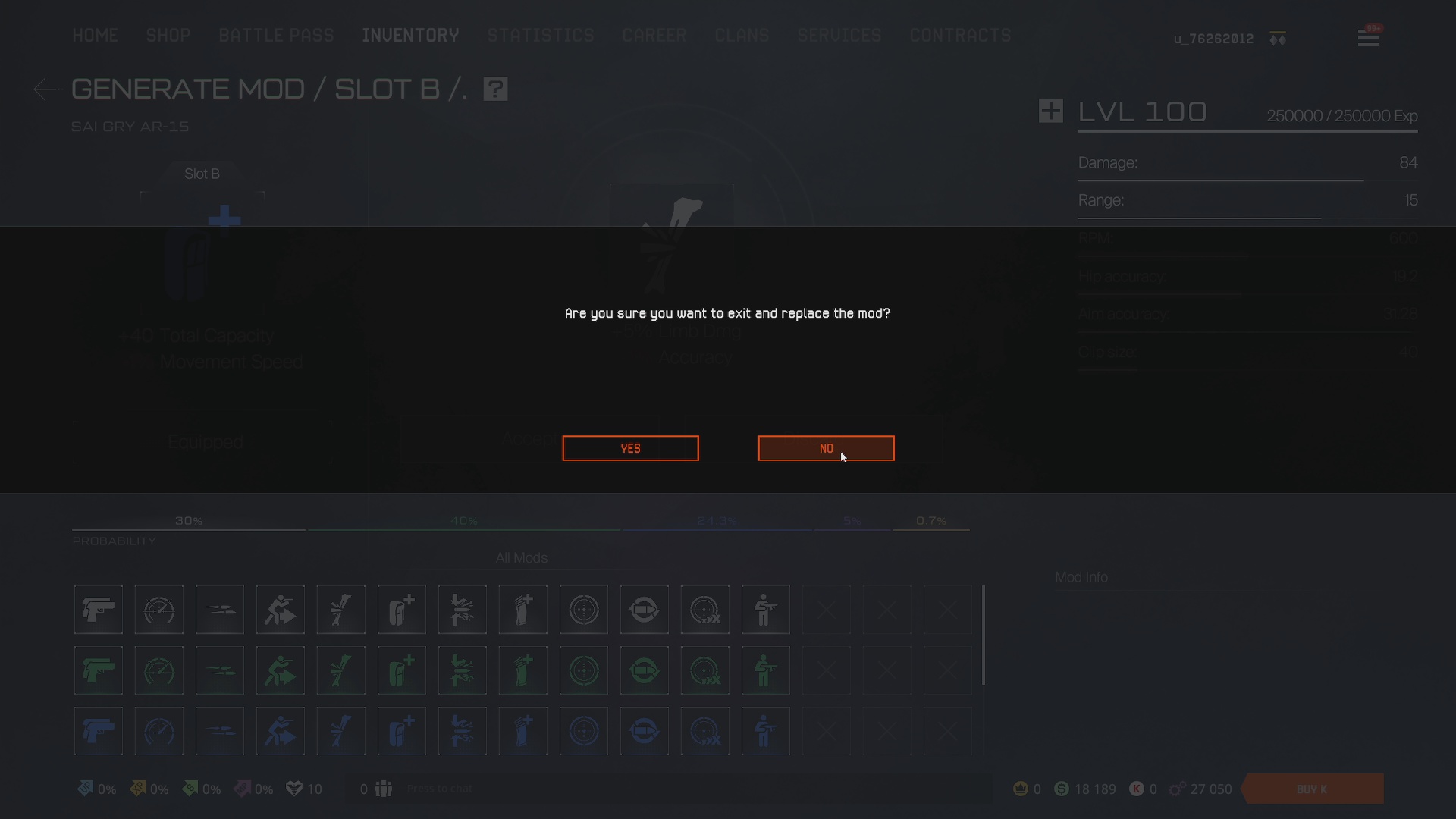 This is all we can share for MODIFICATION SYSTEM – Warface for today. I hope you enjoy the guide! If you have anything to add to this guide or we forget something please let us know via comment! We check each comment! Don’t forget to check SteamClue.com for MORE!