This guide is all about the Mount Chiliad Mystery. I’m going to explain every clue about the mystery, regardless if it has relevance and it has been approved by the community or if it just a theory that hasn’t been proven yet. This guide was made from several sources.

THE GUIDE CONTAINS SPOILERS, SO PLEASE BE AWARE OF IT!

Mount Chiliad Mystery is the biggest mystery of the GTA Universe, but what it is all about?

Inside the Cable Car Station at the summit of the mountain, there is a large map painted on a wall that appears to be a map of Mount Chiliad. Scattered across the map are various odd symbols, seemingly pointing out the locations of secret objects on Mount Chiliad. This drawing makes the base of the whole mystery. 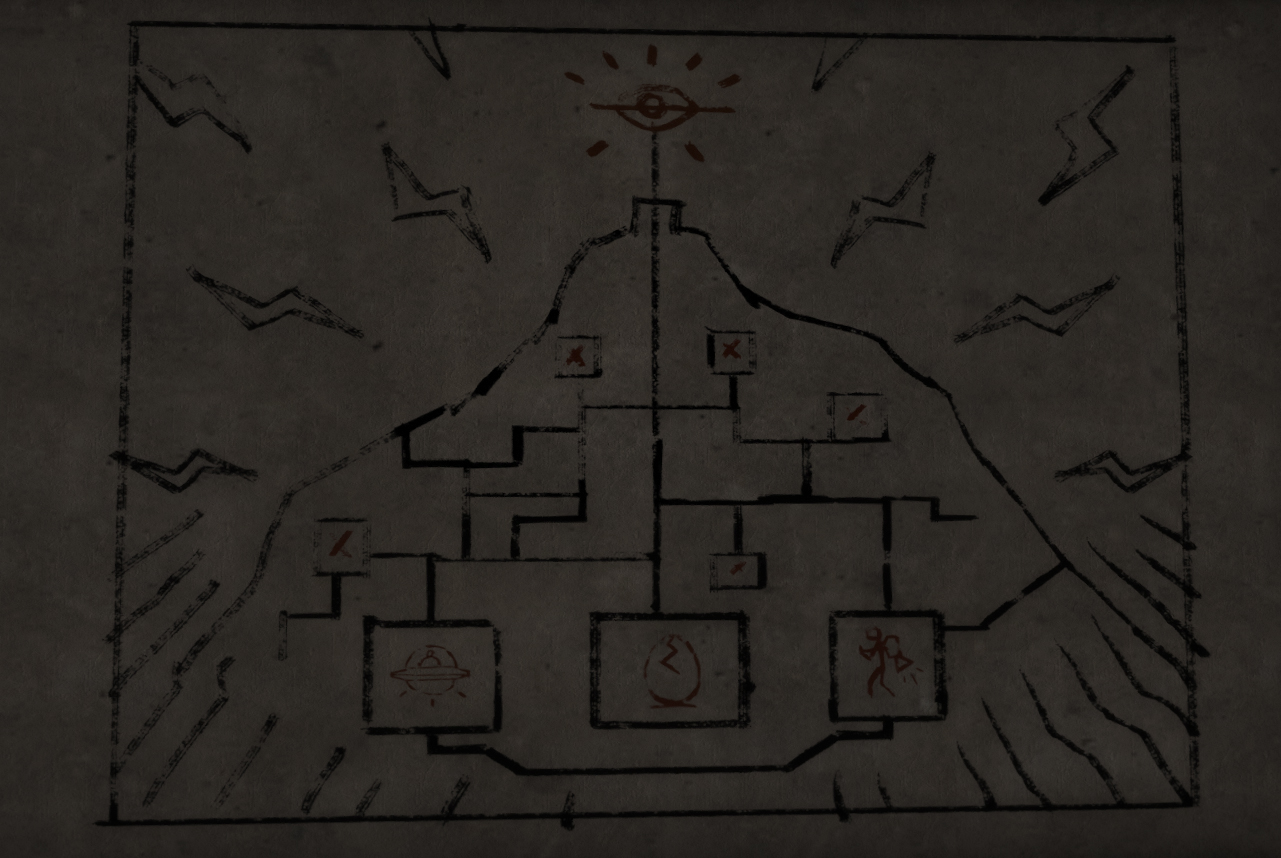 According to this theory(which is claimed to be the solution of the mystery, every symbol are explained and connected to each other),the drawing is referring to the Mount Chiliad itself. Let me explain you the meanings of the symbols, one by one. This “theory” explains the requirements we need to summon the UFO above the Chiliad. So, it’s more like a solution of an easter egg, then an actual theory.

THE ALL SEEING EYE 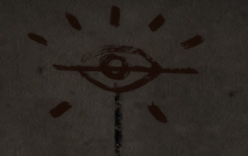 The All Seeing eye is referring to the UFO at the top of the Chiliad. Everyone could summon this UFO, if you fulfill the three requirements. These three are the weather, time and the 100% accomplishmentof the game. We have several hints for all the requirements, I’ll mention those explaining the other symbols.

LITTLE GUY IN THE UFO 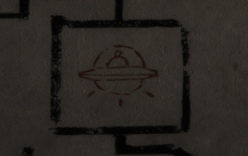 The little guy inside the UFO symbolises Michael. He’s the only main character, who has connections with the aliens. Just like in the Grass Roots, which is the first Strangers & Freaks mission for Michael, where we have to fight aliens. Another example, is the Did Somebody Say Yoga? mission, where Jimmy drugged Michael, who is hallucinating that he is getting captured by aliens. 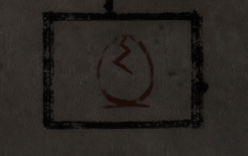 The cracked egg, or alien egg is symbolises Franklin. It refers to his development. From a petty street gangster, he became a real criminal mastermind by the end of the game. 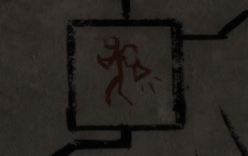 Last but not least, the jetpack, the most notorious symbol, however in this theory, it symbolises the last main character, Trevor. It refers to his past as a pilot. He said the following lines during a mission, which prove this clue: This story’s about a boy called Tr…Tre…Trisha. […] Right. Right. But he could fly planes, this kid. So he signed up to the air force to fly all day long…


Now, that we are aware of the main symbols, let’s take a look at the lines (and also the x’s and other symbols) which are connecting the symbols.

If we take a closer look, we could notice that Michael’s and Trevor’s symbols are connected. That’s because Michael and Trevor knew each other before the events of the game. 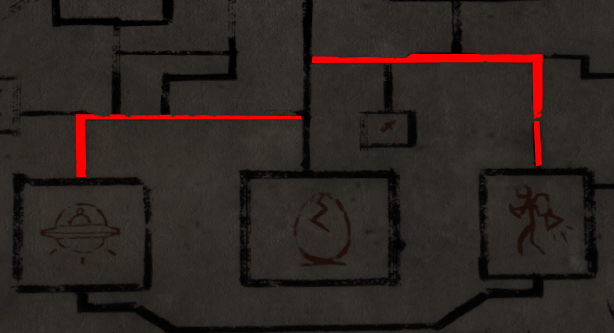 Both Trevor’s and Michael’s symbols are connected to Franklin’s line, however, Michael’s is the first. That’s because Michael met Franklin earlier than Trevor did. 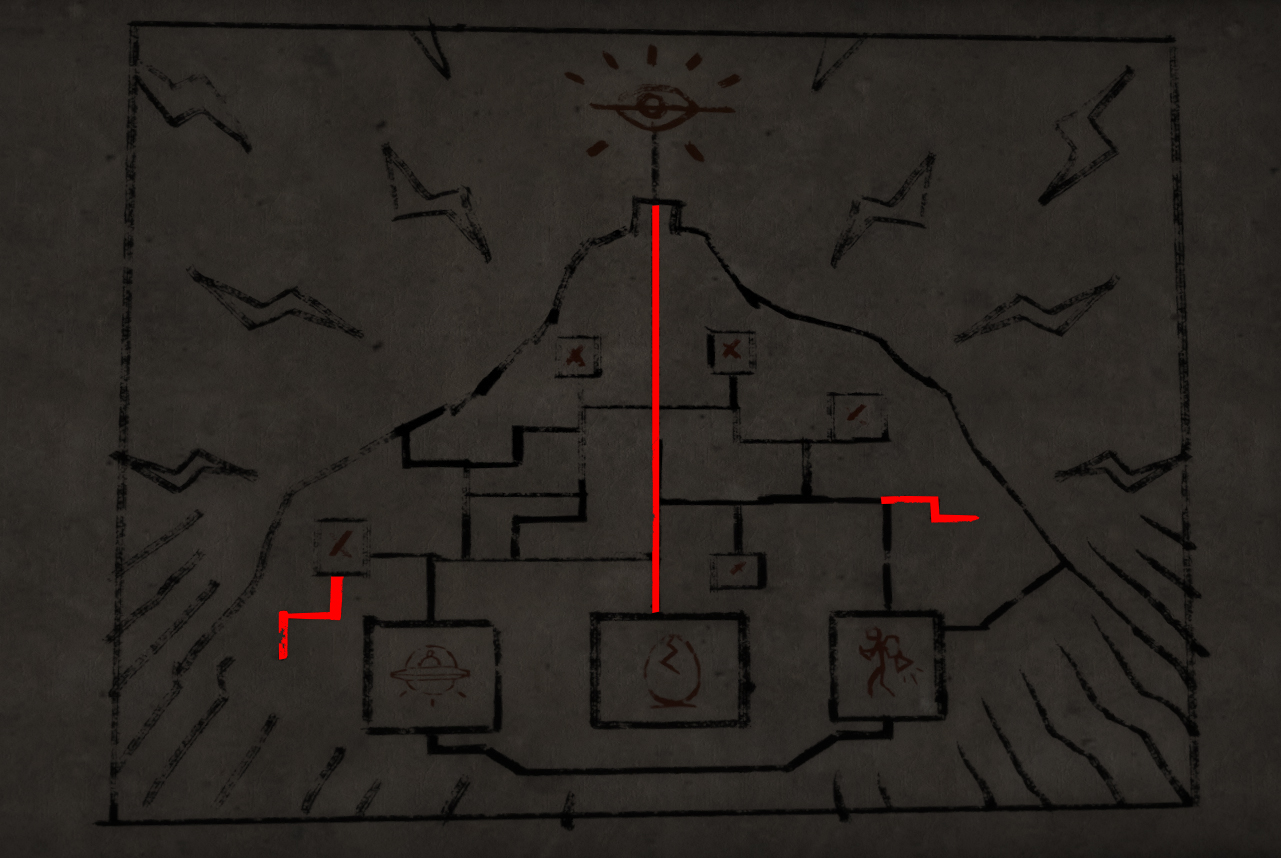 You could notice that Michael’s and Trevor’s line both ends at some point, only Franklin’s reaches the top. The reason for that is very simple. Franklin is the only character who can’t die during the storyline, Michael and Trevor can. 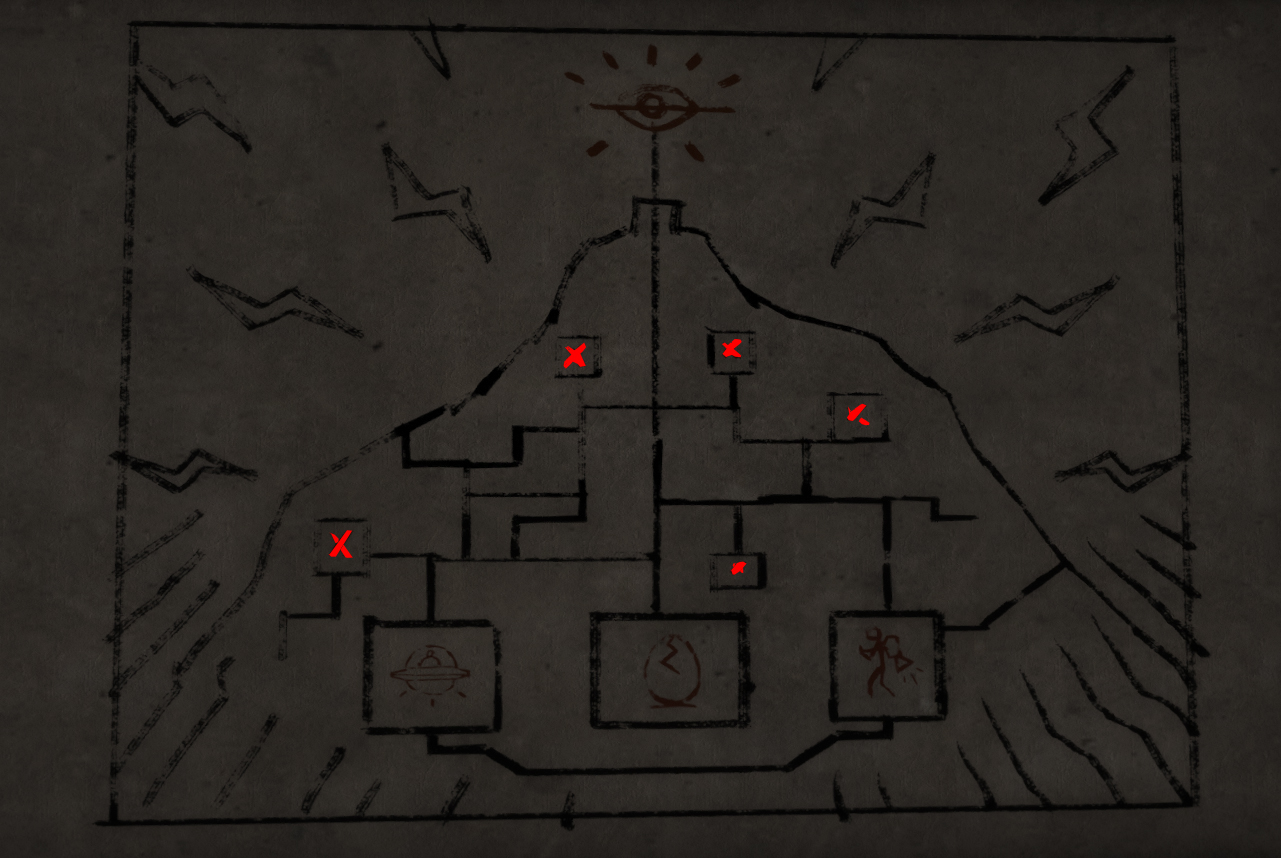 There are five x’s on the map. Those are the five requirements that you need in order to get the 100% accomplishment.

Another possible explanation for the x’s could be the glyphs on the Chillad. (Click on the picture for a larger view) 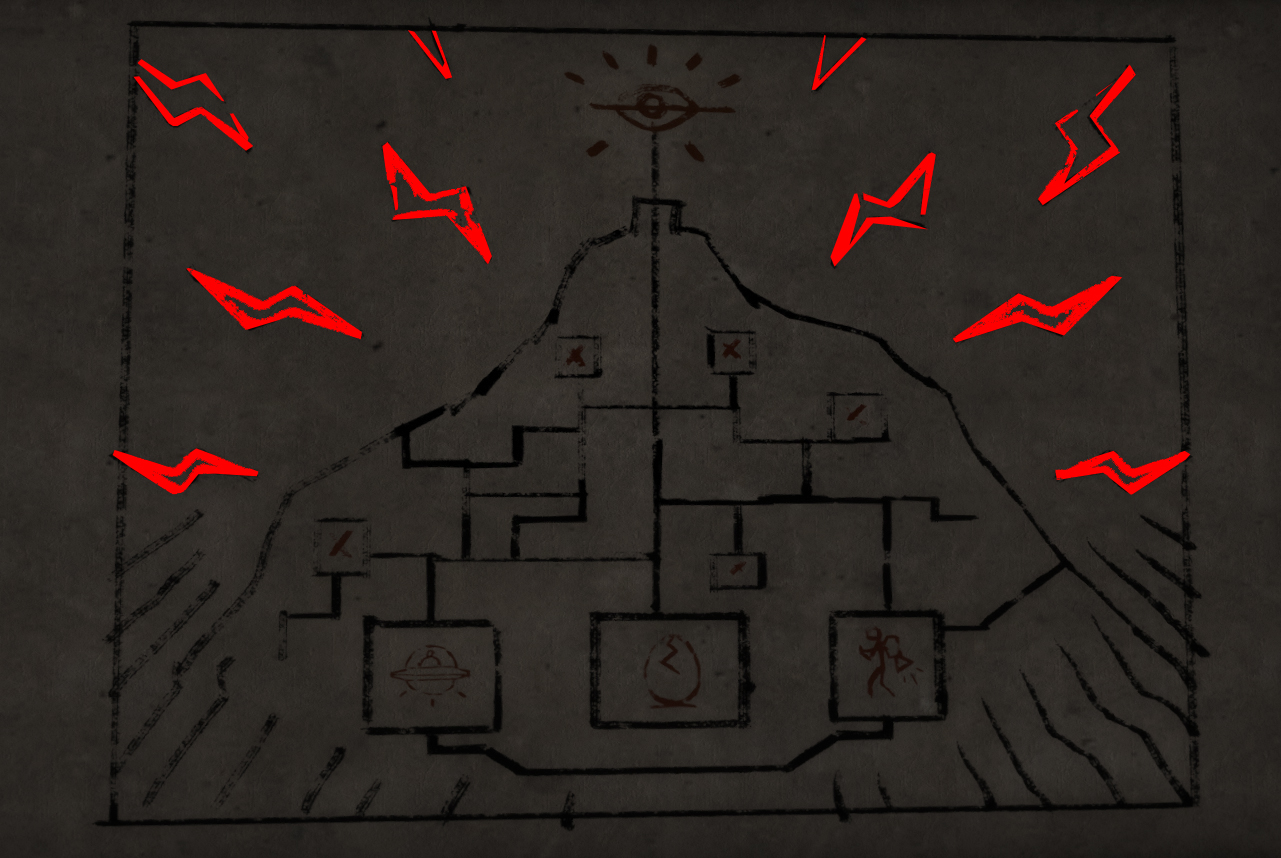 Remember when I mentioned the three requirements you need in order to summon the UFO?

One of them was the weather. You needstormy weather, which are symbolised by the lightnings.

A red, all seeing eye could be found under the information table, at the top of the Chiliad. This could also be the top symbol, I explained first.

Next to the red eye, there’s the following sentence scratched into the wood. It clearly refers to the 100% accomplishment. (Click on the picture for larger view)

This theory fully belongs to the GTA Myths Wiki – [fandom.com]

The mystery behind UFOs, the Underwater Hatch and the possibility of a Jetpackin the game may be on the verge of being solved. Players have partially overlaid the vertical cutaway map of the mountain displayed on the wall of the Cable Car Station on top of the Northern reaches of the in-game map and certain areas of interest seem to line-up with markings on the diagram on the wall. If viewing Mount Chiliad from the correct angle you can overlay the mural on top of the mountain itself to discover the locations of the Mount Chiliad Drawings which tell you to come back to the mountain after getting 100% game completion when it is 3am at night while it’s raining in order to see the UFO. 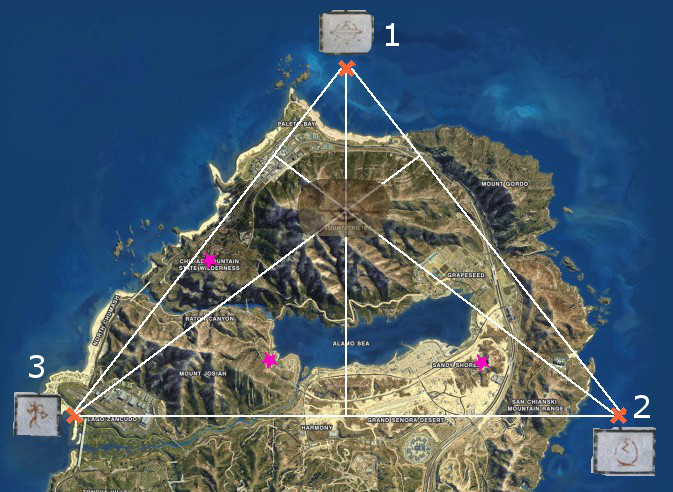 The mural when lined up with the mountain itself from a helicopter at the right angle shows where to find the Mount Chiliad Drawings. The mural shows a UFO directly over the mountain which can be discovered about the mountain by the player if they follow the clues in the drawings after getting 100% complete in the story mode and returning to the mountain during the correct conditions suggested by the drawings.


If overlaid on the map directly North-to-South, players have found that the UFO-like marking that adorns the top of the diagram overlays directly where the Sunken UFO Wreckage is located.

Unfortunately, this is where common sense ends and community consensus is torn, as the overlay now must be flipped horizontally and seriously up-scaled to the point, where the second UFO-like marking in the bottom Left corner of the diagram would mark a location far off the Eastern side of the map. However, if this is done, the Jetpack marking on the diagram would overlay Fort Zancudo, a heavily guarded military installation. Players have theorized that this would be the most likely place a Jetpack would be discovered, as reflected in San Andreas, where the Jetpack could be found inside Area 69. The drawing likely indicates that a UFO could appear given some additional work after all 50 UFO parts (Spaceship Parts) are collected, after the UFO’s appearance presumably, the jetpack would be unlocked.


There have been players who claimed to have found a Jetpack in Grapeseed County. The diagram could, theoretically, present a similar location, by placing the UFO-like marking that adorns the top of the diagram at the Paleto Bay area, then, by following the highway from Paleto Bay through Mount Chiliad and Mount Gordo to Grapeseed, a resemblance can be made between the line on the left side of the pyramid and said highway.


It is probable that the Jetpack alluded to the Thruster from The Doomsday Heist. This seems likely to have been extreme foreshadowing by the developers for what was to come in GTA Online considering that the update for The Doomsday Heist was released four years after Grand Theft Auto 5 was initial release. However considering the mural leads to the tunnel that is part of the mission it is the most likely explanation.

The Alien egg marking on the diagram now marks the spot of the Eastern shoreline. Players have theorized that the egg may refer to the Epsilon Cult’s beliefs, in which it is stated that the world hatched from an egg.


It is also theorized that the egg may be connected to the fountain at the base of the Maze Bank Tower.

Players have theorized that the X markings on the diagram of the wall of the Cable Car Station are not to be considered as haphazard co-ordinates but, rather, an indication of the number of strange markings within the triangle, as no matter how the diagram is skewed or scaled when overlaid the game map, none of the X markings line up with any of the discovered locations of interest. As only 3 strange markings are believed to have been discovered within the triangle, 2 more are thought to remain, which may reveal more clues to the mystery. It is likely that the X markings are actually the Roman Numeral 10, as 5 of them indicate there are 50 UFO parts, and given the Illuminati theme, the occult does have a fetish for numbers.


The X markings lead to the petroglyphs by overlaying the mural on top of the mountain itself. The petroglyphs can be interpreted to explain how to see the UFO at Mount Chiliad after achieving 100% completion of the story mode. Thus solving part of the mural’s puzzle.

Another assertion is that the diagram on the wall of the Cable Car Station is simply a visual representation of the prerequisites for 100% completion of the game, which is necessary before a UFO appears above the lookout at the peak of Mount Chiliad (this could be represented on the diagram by the UFO-like object that adorns the top). It has also been suggested that the lightning markings around the diagram might represent the in-climate weather that must be present in order for the UFO to reveal itself.


Further, others assert that no horizontal flipping and little up-scaling is required and that the Easter Egg may be found somewhere in the Alamo Sea while the second UFO-like marking in the bottom left corner marks a location over the Chiliad Wilderness. Alternatively, there are players who believe the map is tied to Mount Chiliad in GTA San Andreas, as there is a tunnel in that version.


The mural does not represent the completion of the game but rather the petroglyphs that act as clues to the mystery. However the top glyph represented in the mural corresponds to a petroglyph that can be seen under the viewing platform at the summit above which “COME BACK WHEN YOUR STORY IS COMPLETE.” Meaning that 100% completion is required as part of the solution to the mystery.

These are pretty much the two most famous theories about the Chiliad.

If you are interested in the topic, visit the Solving the Mt. Chiliad Mystery – [reddit.com]  subreddit.

I hope you enjoy the Mount Chiliad Mystery – Grand Theft Auto V guide. This is all for now! If you have something to add to this guide or forget to add some information, please let us know via comment! We check each comment manually!