Moe Era contains a hidden scene where Nana talks about the book “Flowers for Algernon” instead of “Winnie-the-Pooh”. It’s normally only shown in the Chinese translation, but by quickly switching the language to Chinese and back, you can read it in English!

Play through the game normally, up until the part where they start talking about books. It doesn’t matter what choices you make to get there. When you get to the line, “Rodion finds himself in moral agony, disgusted by what he has done”… 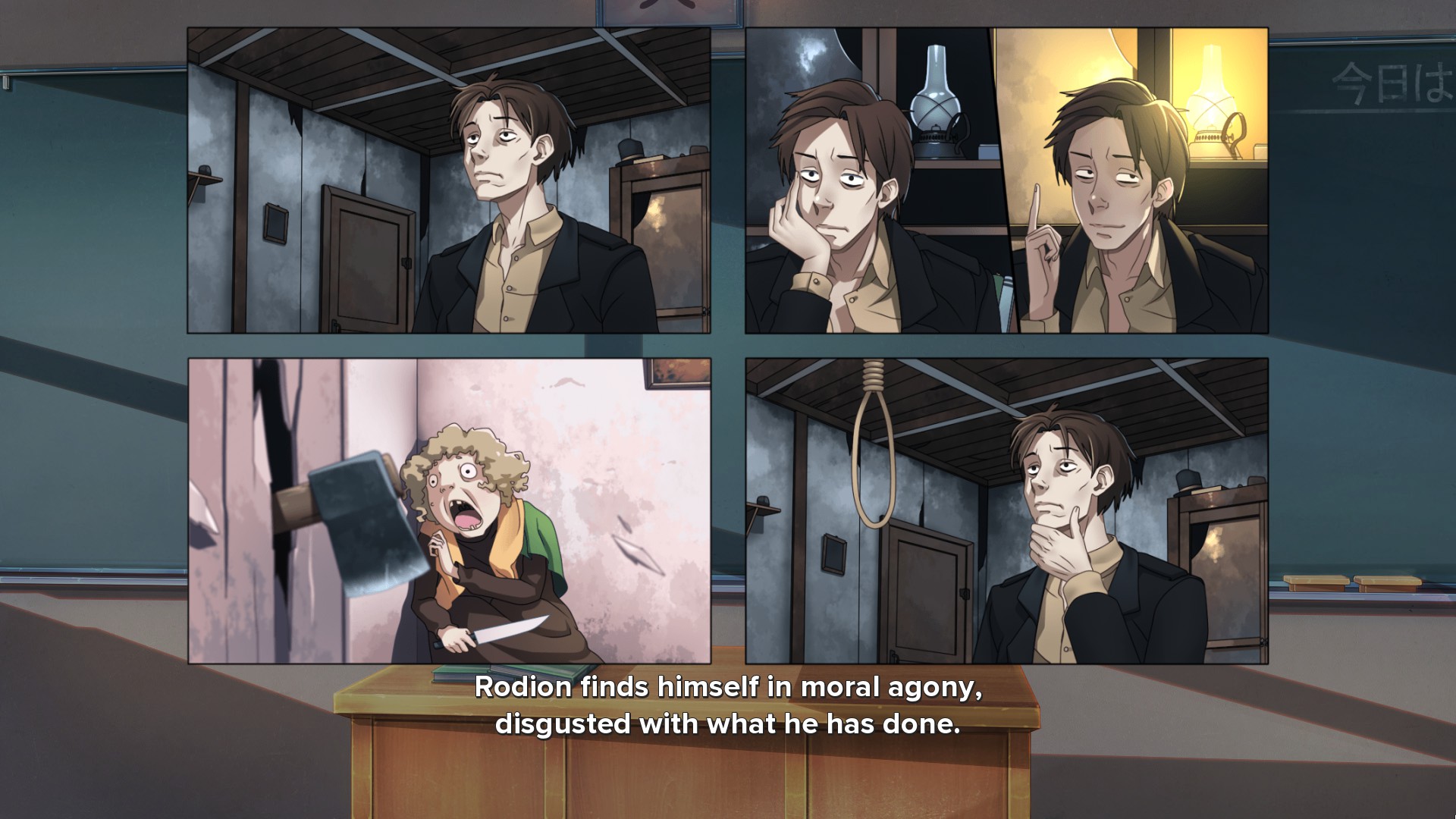 …press Escape to open the menu and then change the language to Chinese. Chinese is the fourth option in the list of languages. 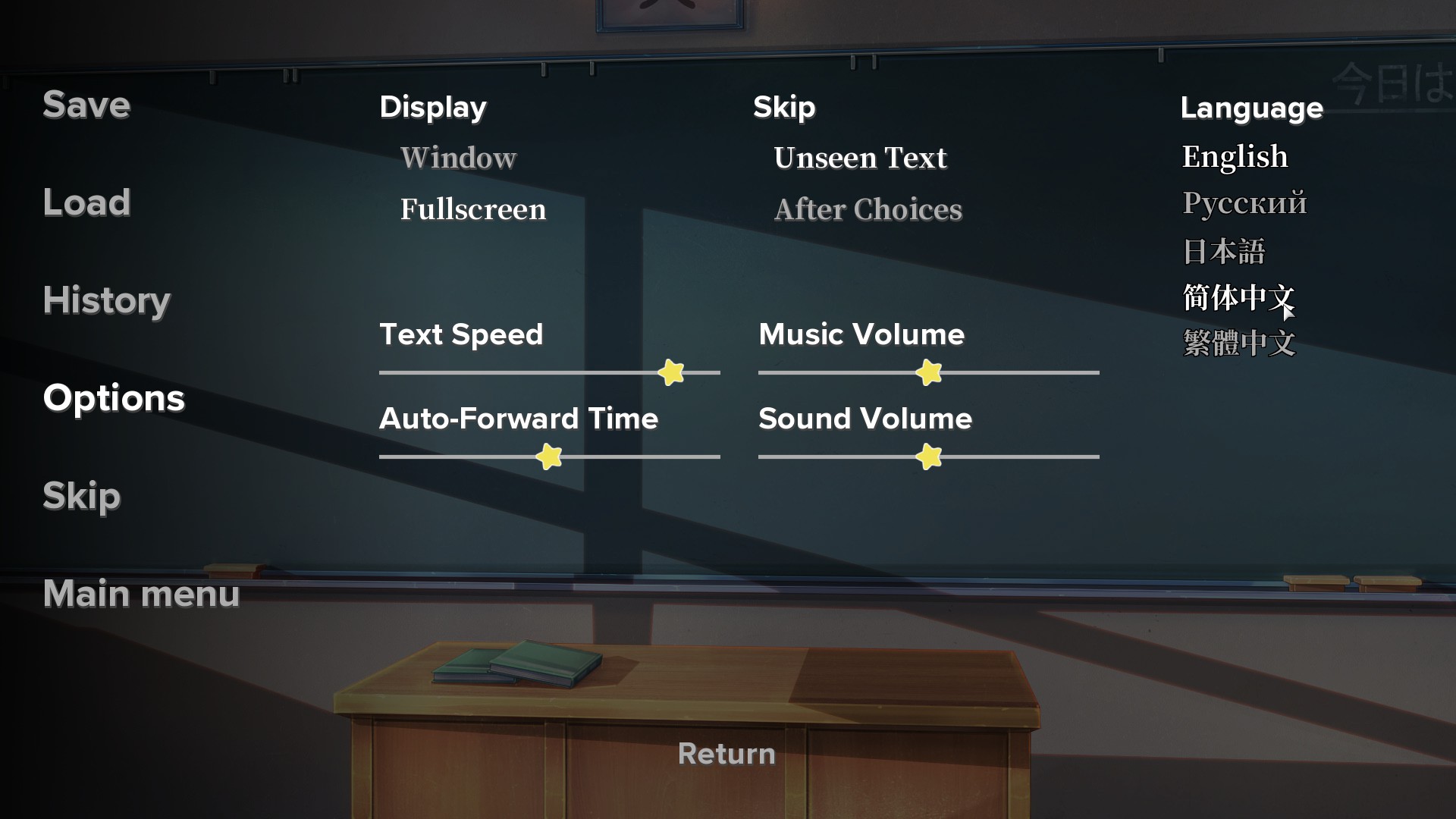 Press Escape again to return to the game, click once to advance to the next line, then go back into the menu and set the language back to English. (If you don’t remember where the menu items are, you can use the above screenshot as a reference.) Then, you’ll get to read a bit about “Flowers for Algernon”!


…Okay, this one is kind of lame, since there aren’t any pictures like there are for the other books. In fact, you don’t even need to bother actually doing it. Here’s all the unique text you see this way: 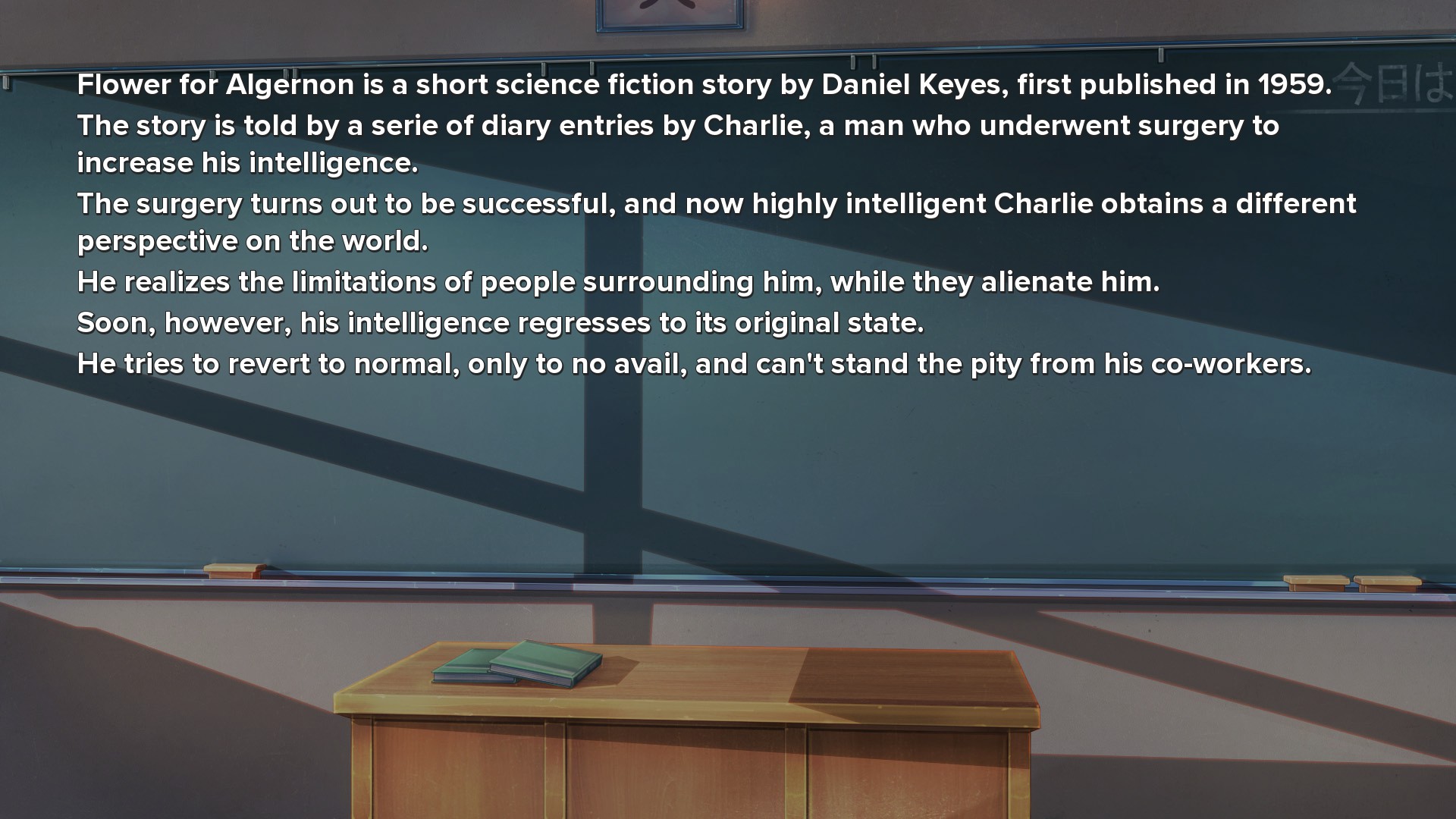 I promise the next section is better though!

A few lines later, you’re presented with a choice of which book to read: 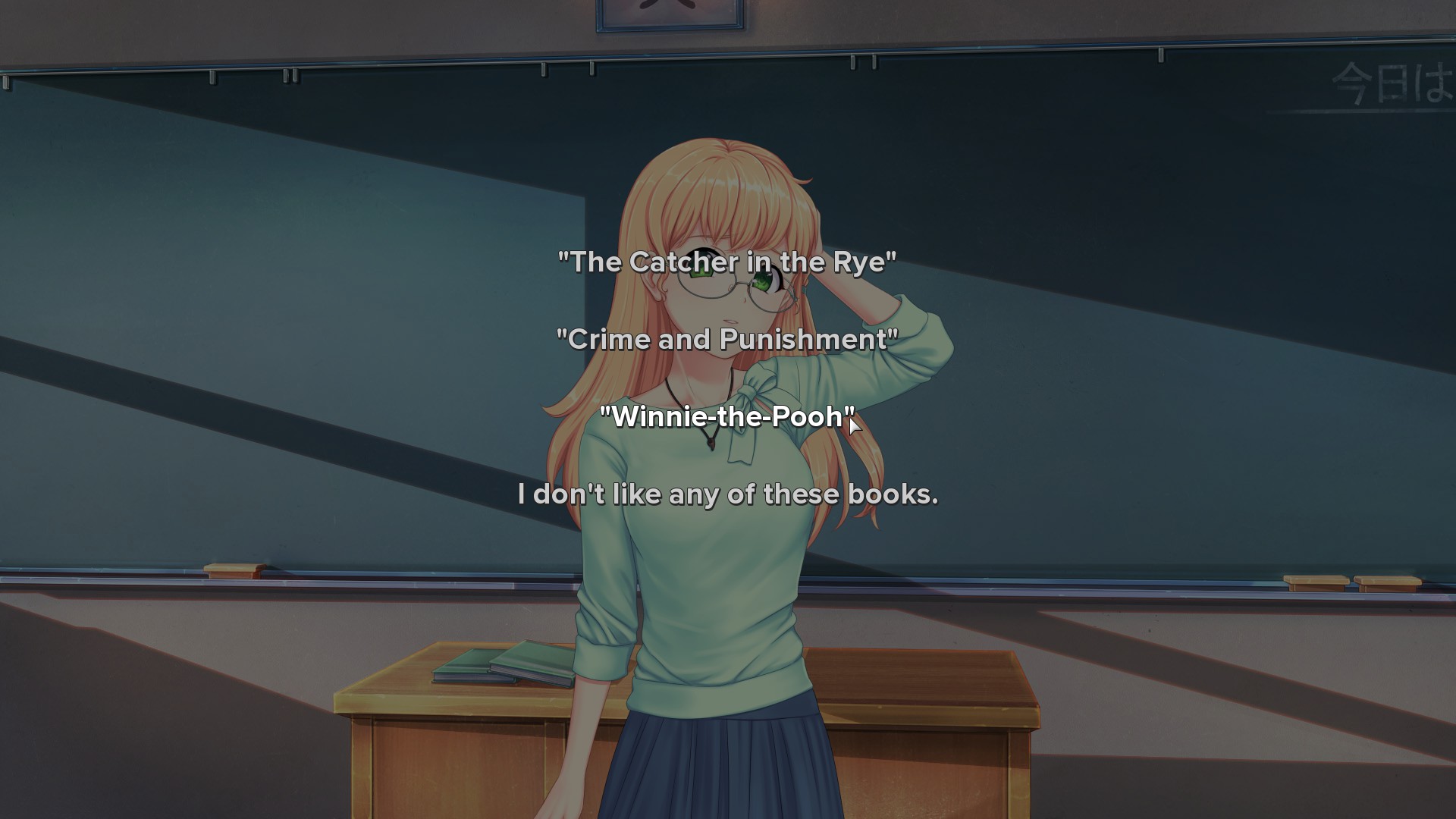 Just like before, go into the menu and change the language to Chinese. Then, click the option corresponding to “Winnie-the-Pooh” — it’s the third one in the menu. After you’ve chosen the book, set the language back to English again.


You have to change the language to Chinese right at this part, even if you already followed the steps in the previous section!


If you’ve done it right, you’ll be rewarded with a unique version of the CG and some unique dialogue: 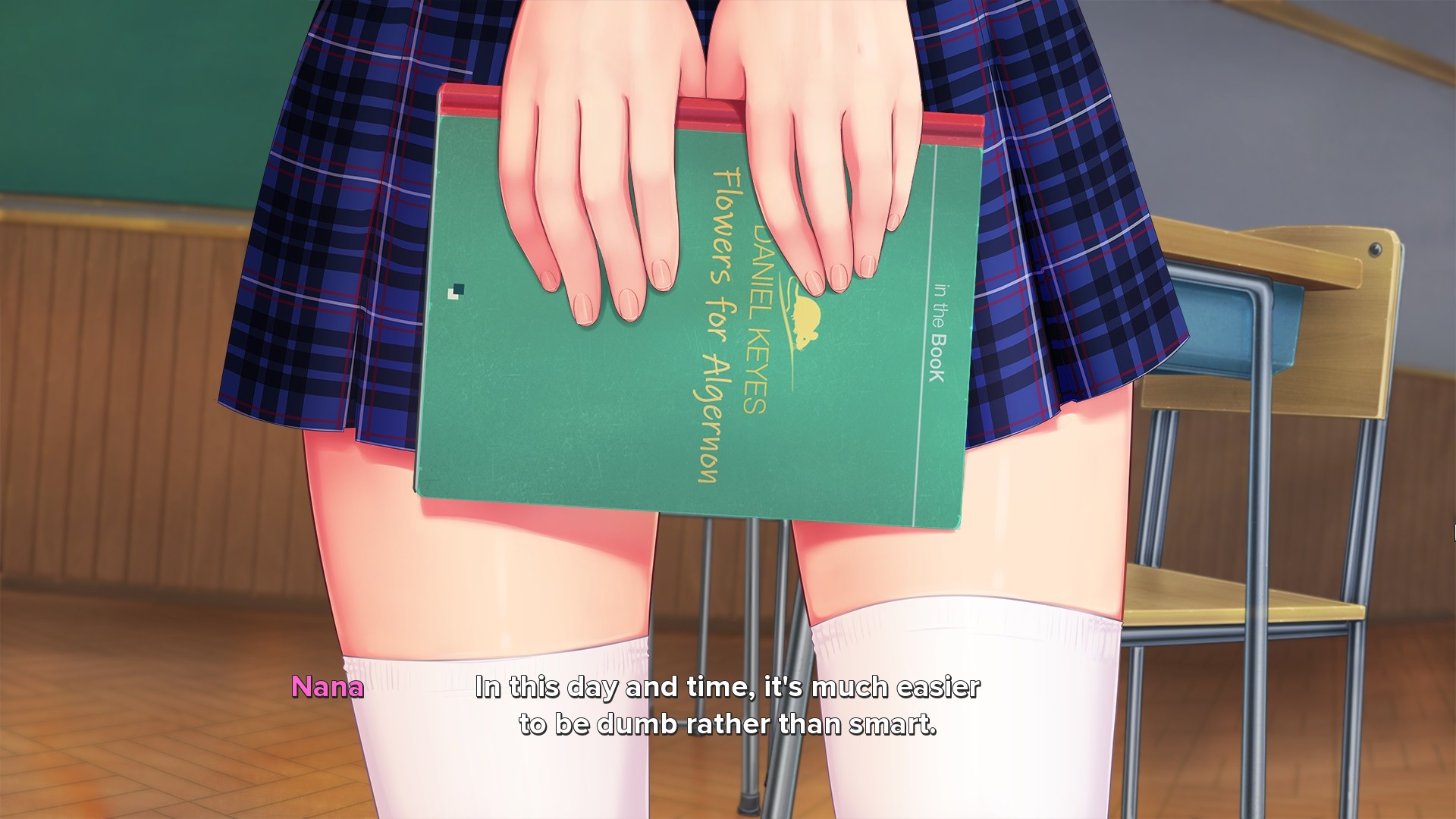 That’s all! I hope you enjoyed seeing a really obscure part of this great little game.

Written by Windows for Workgroups

This is all we can share for Read the secret “Flowers for Algernon” scene – Moe Era for today. I hope you enjoy the guide! If you have anything to add to this guide or we forget something please let us know via comment! We check each comment! Don’t forget to check SteamClue.com for MORE!