A quick and comprehensive guide to acquire the achievements in Severed Steel for Campaign, New Game Plus and Firefight (as of the 3.0 update).

These achievements are naturally earned by completing the campaign chapters (42 levels total), each chapter ending with a cut-scene.

Earned after the Cybermedicine level completion.

This is part of Chapter 1, and earned by completing R&D and Production lab levels.

Earned after the Train level completion.

Earned after the Prison level completion.

Earned after beating the CEO boss in his office.

Earned after completing the final level of the game.

Last level in the campaign. If this did not pop up after completing the campaign, it can be selected in the “Mission Select” menu.

Upon completing the game the first time, the campaign button will be changed to “Campaign +”, which will give you the option to play the game in New Game + if selected (“New + will be at the bottom of the campaign menu.) 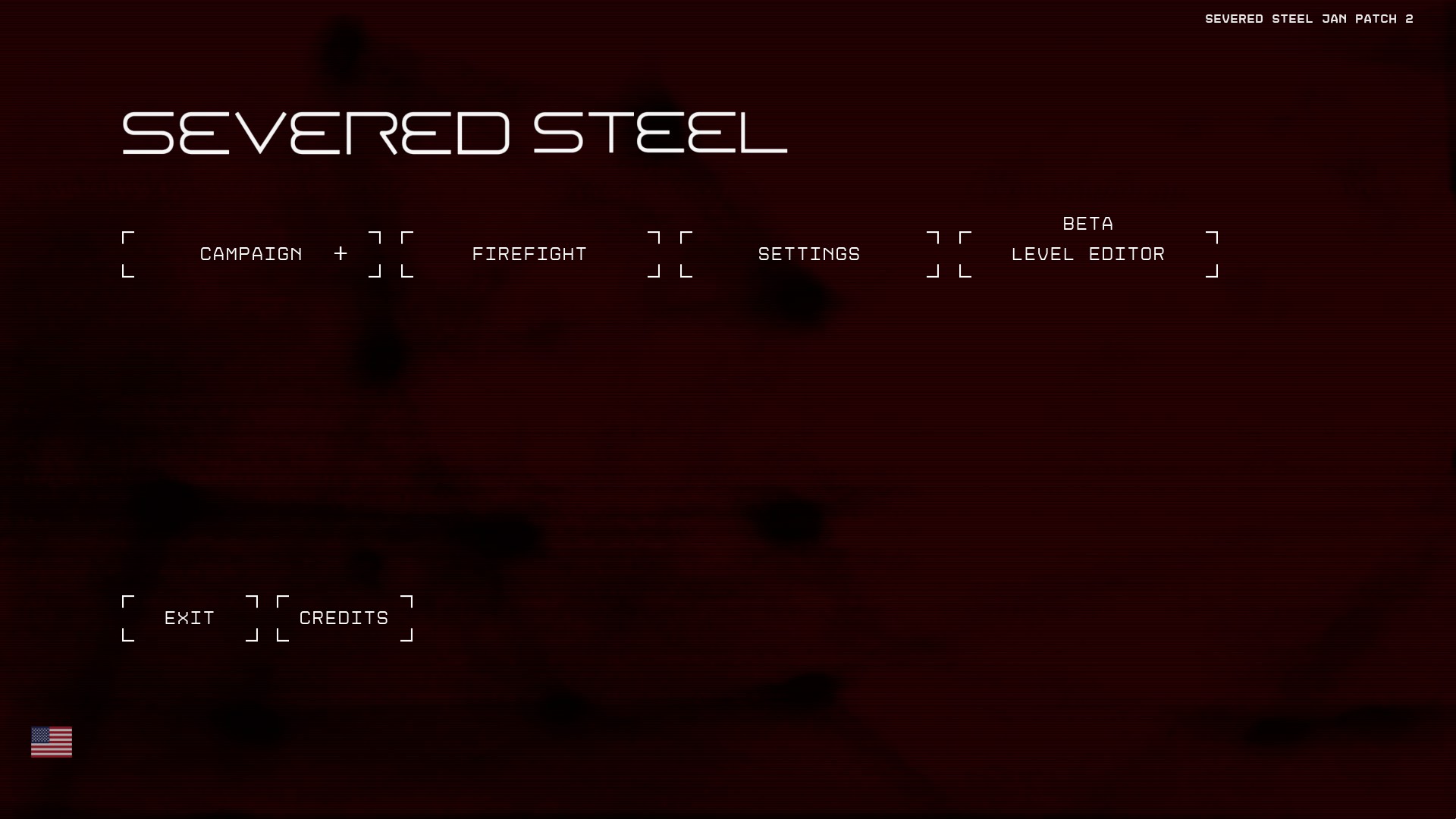 In New Game +, there will be more enemies than before and randomized spawn location. In addition, some of levels will have respawning enemies. Nevertheless, select the difficulty and options and have fun with the new campaign run!

This achievement is self-explanatory, complete the entire campaign in New Game + mode on any difficulty.

For this achievement, it can be completed during your New Game Plus campaign run or in mission select and turning on the New Game + Mode mutator. For this, just run throughout the level killing everyone. Eventually, more foes will spawn in, and this will include heavies with lobbers. Difficulty does not matter to earn this achievement.

Compliments to the Chef

This can be acquired by starting a fresh New Game Plus campaign run with the Warrior Monk mutator selected and played to this level or in Mission Select with the New Game + Mode and Warrior Monk selected with the Gravity Gun equipped. 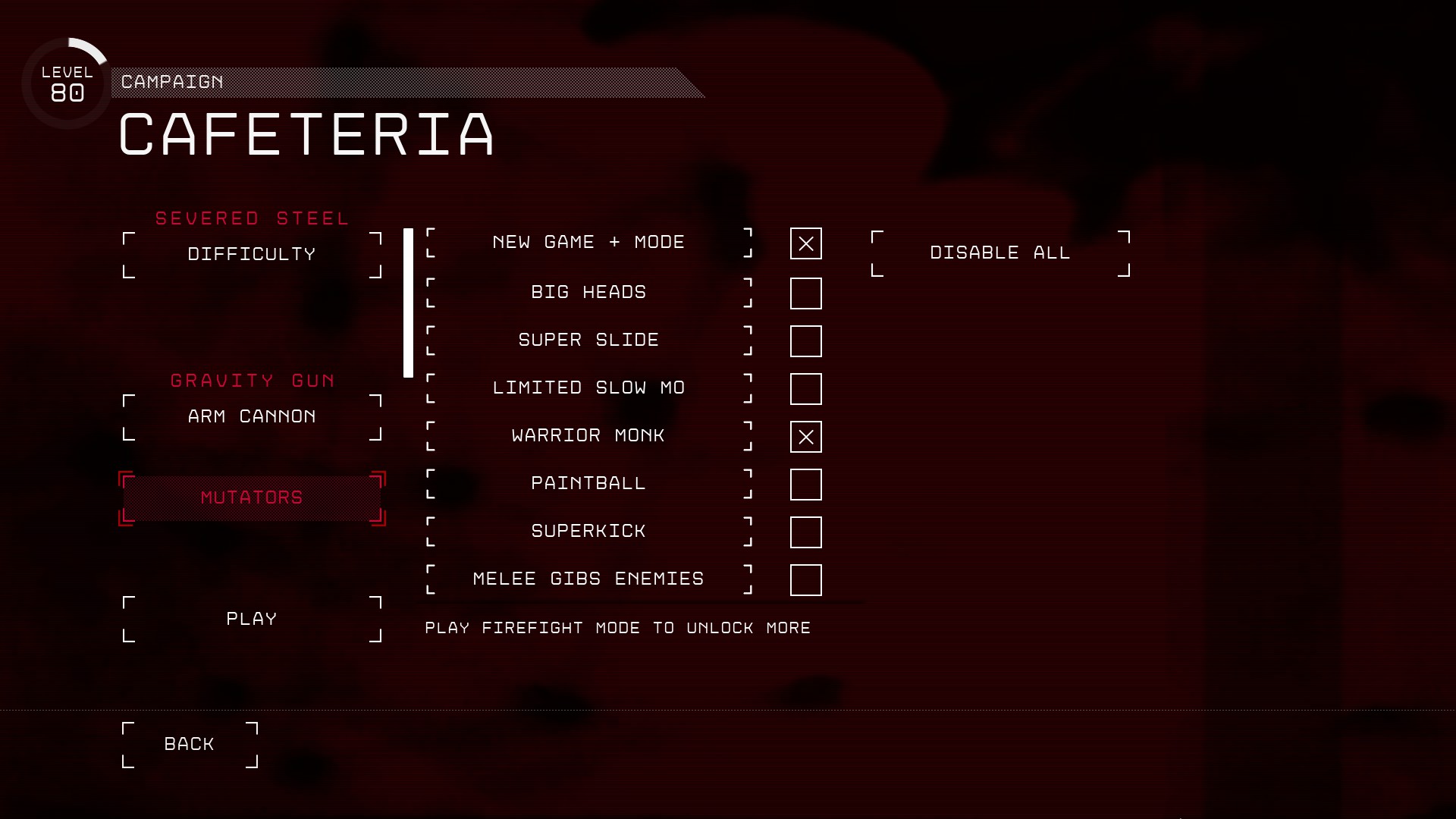 These achievements are only earned through the Firefight mode, a score attack game mode that allows you to replay stages that is all about clearing them out in style and speed. Experience points towards the next level are only earned upon completion of the stage (based on the score), so any deaths will force a restart of both level and score.


There are mutators that will change how the game plays, enemies spawn, and either buffs or debuffs to Steel. Also, certain mutators have a multiplier for the overall score such as Warrior Monk is 1.5x the total score, while Big Head will be cut the score in half.


Mutators, weapons and stages are all unlocked by leveling up (indicated by the level requirement next to the weapon, mutator or map. Most of the Arm Cannons like the Impact Driver or Meta Grenade Cannon are only unlocked from completing challenges per level (such as 5 headshots or 3 kills in one dive). So feel free to go back to older stages to try and beat the previous score, complete challenges or test out different mutators/weapons on a map.

These achievements will come naturally from playing the game.


These can be earned quickly by playing on Cold Steel difficulty and turning on the “Triple Threat” Mutator (tripling the enemy count on a level) on a Campaign run or Mission Select/Firefight level.

For these achievements, they can be done individually in the Campaign menu under the “Mission Select” button. Each one has their own specific requirement, but there are no difficulty requirements. But to unlock mutators and arm cannons, you will have to play Firefight mode and level up/complete challenges first.

Equip any arm cannon and complete the Cybermedicine level.

Equip the Meta Grenade Cannon and complete the City level.

Equip the Limited Slow-Mo Mutator and complete the Museum level.

Equip the Floor is Lava Mutator and complete the Server Room level. Recommended on Cold Steel difficulty as it has an auto-heal perk, full ammo gun pickup and infinite slow-mo.

Fire in the Hole

Equip the Floor is Lava Mutator and complete the Greens level. Recommended on Cold Steel difficulty as it has an auto-heal perk, full ammo gun pickup and infinite slow-mo.

Equip the One in the Chamber mutator and complete the Portal Labs level.

The more elaborate stage achievements will have their own sections below:

For the Admin Vents level, do not hit the floor panel to activate the fans. Instead, use the walls in the level to wall run and jump on top of the rooms. You may need to use the kick to help climb up the sides of the rooms as well. Continue climbing this method until you reach the final room and enter the exit door.

The screenshot below shows the panel at the waypoint, which is to be avoided for this achievement. 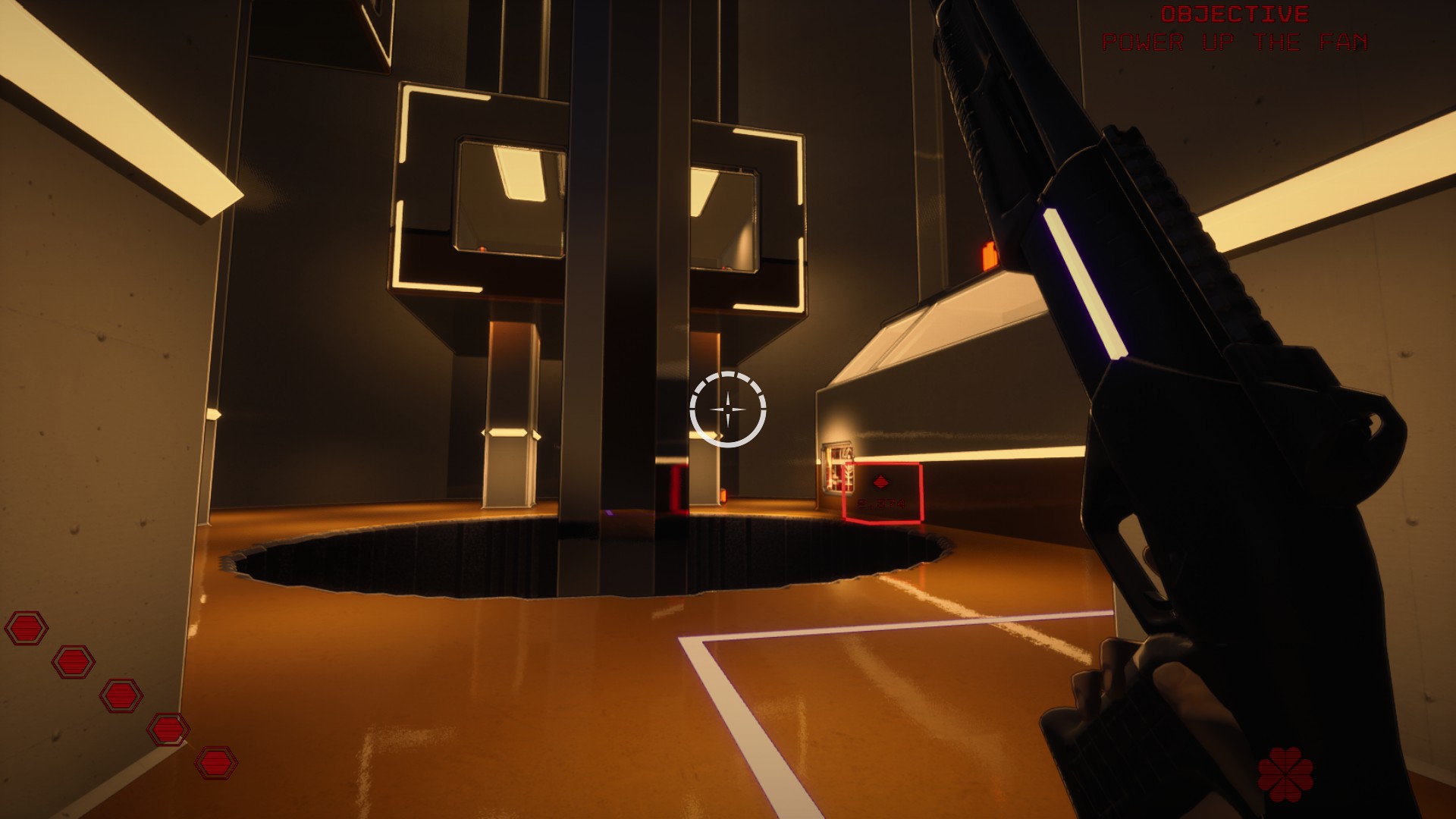 In the Production Lab level, kill all the enemies in the level, but leave all 7 of the highlighted consoles untouched. Accurately take down enemies and try to angle yourself to not hit any of the consoles until it is all clear. After all enemies are dead, go ahead and destroy the consoles to finish the level.

The screenshot below shows the location of the highlighted consoles. 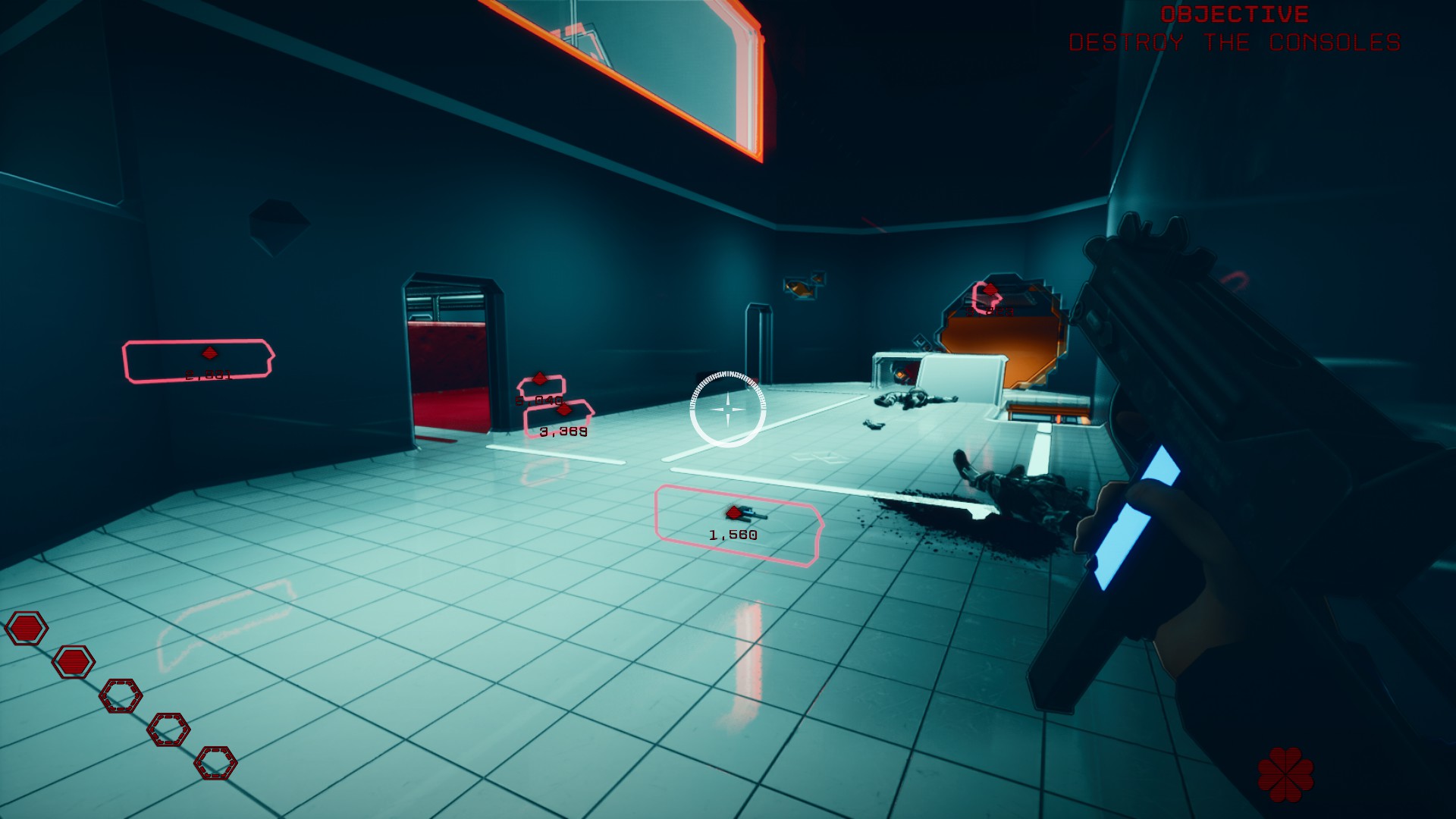 Warrior in a Garden Achievement

Equip the Gravity Gun and Warrior Monk Mutator and complete the Gardens level. Use the rocks in and around the garden maze to take out the mooks quickly (screenshot below), while throw, shoot items and kick the flamethrower heavies in their back weak spot. Killing everyone will prompt the lights and opening the exit to acquire the achievement. 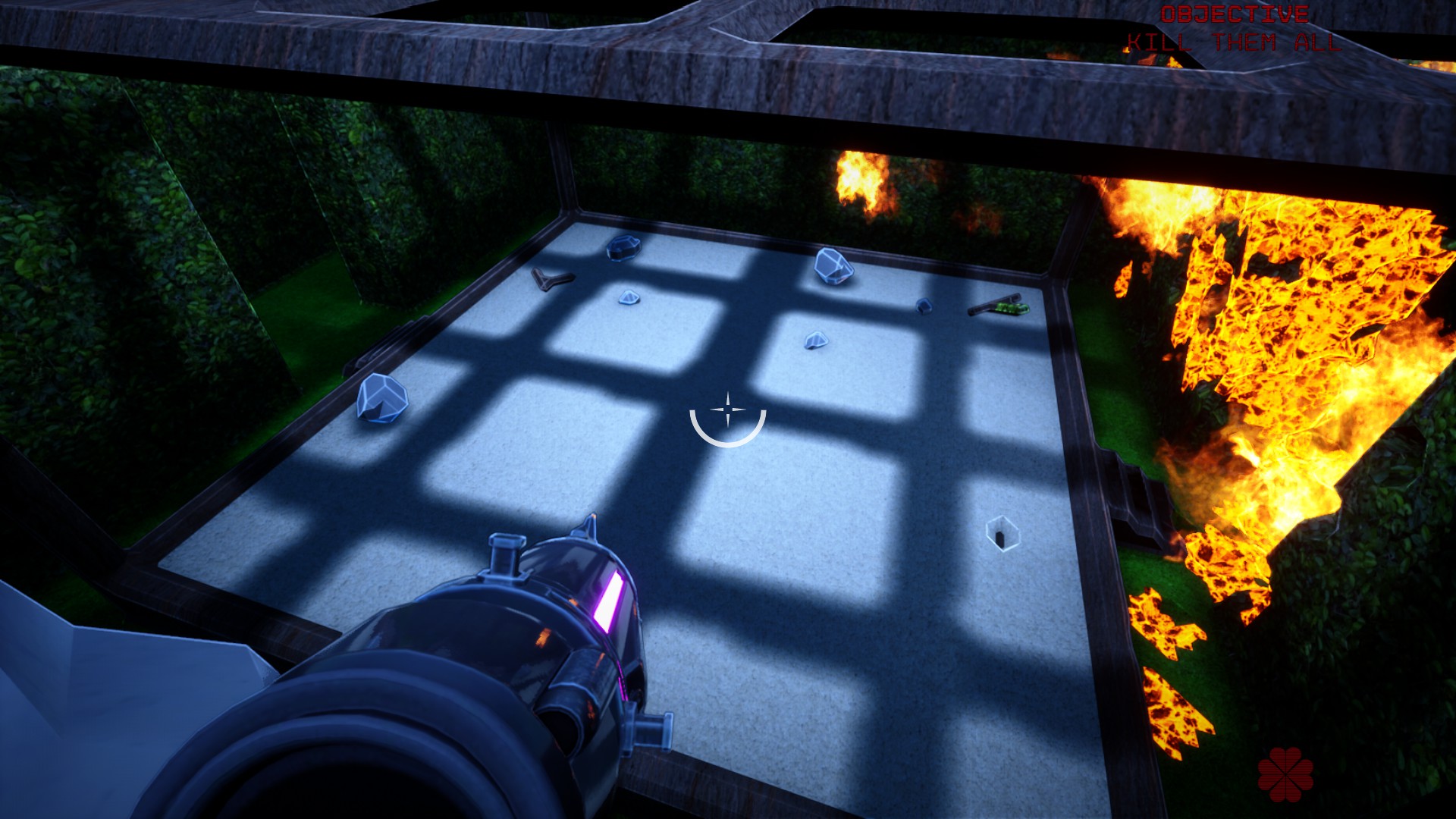 Out of Order Achievement

Highly recommend equipping the Plasma/Meta Grenade Cannon, but any cannon that can make craters will be fine. There is a heavy with a lobber in the center of the map that can be used to create pathways as well. Moreover, avoid the stairs at the edge of the level, instead use the pillars in the middle of the map as a foundation to climb, use the kick off the wall. Complete the Middle Admin level without touching the stairways by exiting out the elevator to earn the achievement.

The screenshots below show examples of holes to create to access the different levels. 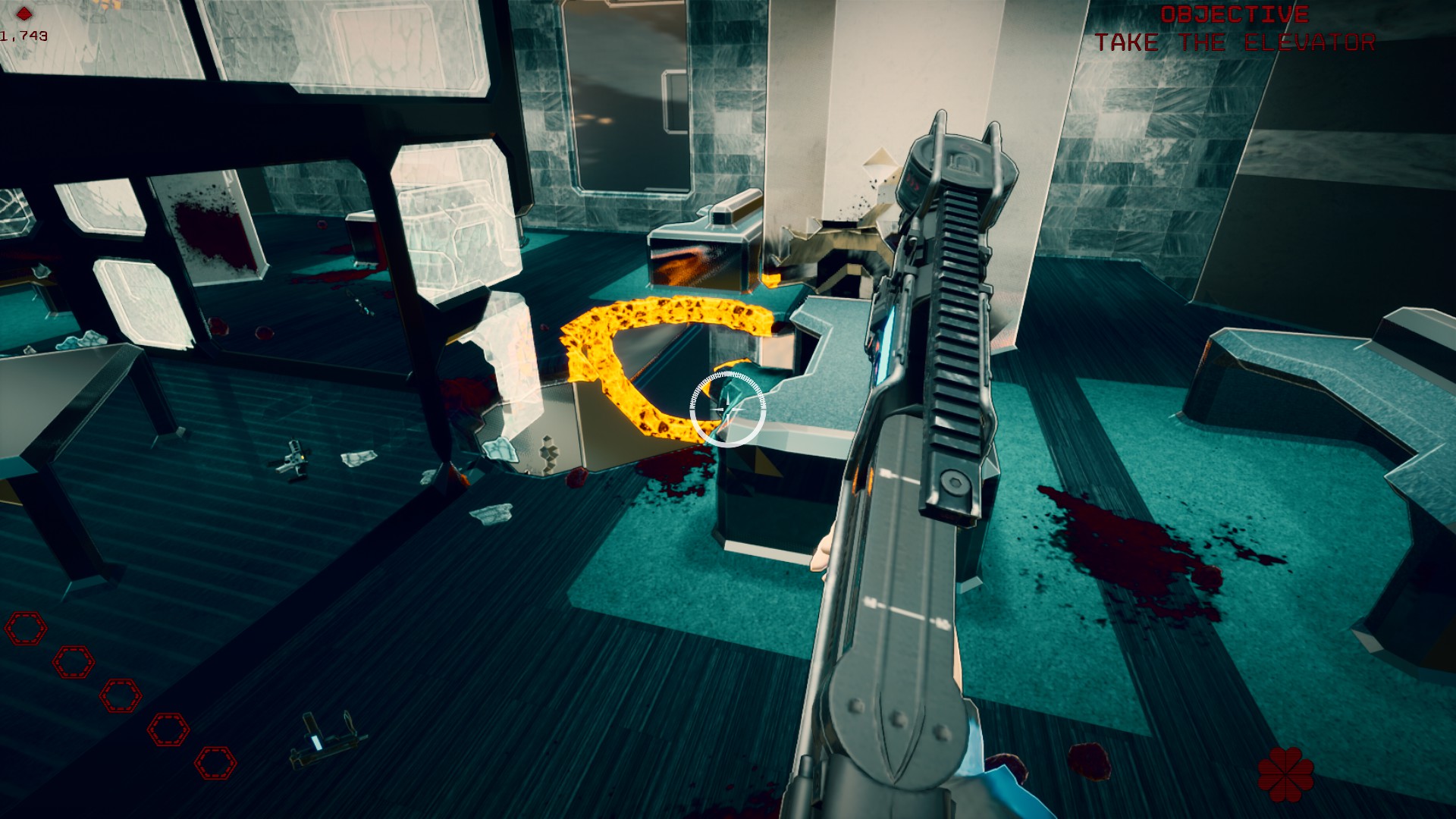 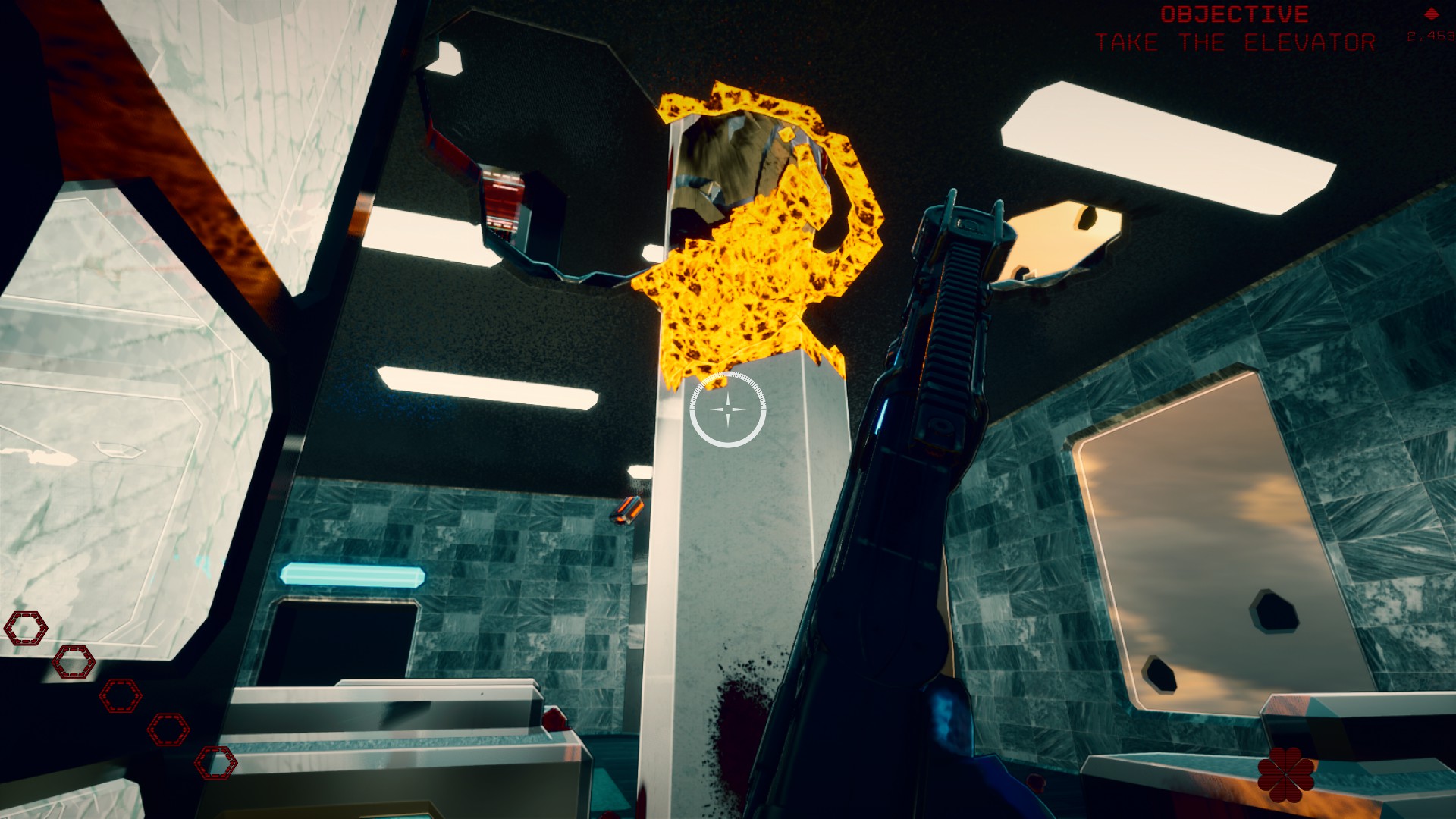 This will only count from either the Campaign run or Mission Select at the Train Station. The Firefight variant does not have a timer, so it is excluded from the achievement.

Highly recommend equipping the Meta Grenade Cannon and playing on Cold Steel difficulty for this mission. It is a lot of trial and error to learn the enemy spawn locations and to hunt down foes hidden in hallways and doorways. The Meta Grenade cannon is useful for taking own the shielded enemies as well as not requiring a charge to make a hole in the ground for a quick path to the exit.

There are 21 total enemies on this stage to take out in under 40 seconds (though solo-mo will elongate that time).

I have included my play-through video for the achievement below (quite a bit sloppy, but the timer is lenient in taking everyone out.)

Highly recommend equipping the Meta Grenade Cannon for this achievement, playing on Cold Steel difficulty will help immensely with the infinite slow-mo perk.

In the Conscience level, the final boss has multiple stages to go through in order to be defeated. The first four parts (activate the portal, start the process, 1st damage the heart and destroy the shields) have no time limit, so take your own pace. However, as soon as the last node for the shield is destroyed, the timer will start, and if the heart is only damaged and not destroyed after a certain amount of time, it will reactivate the shields, causing you to redo the shield process again and likely losing out on the achievement.

During the shields phase, go directly under the heart and destroy the bridge path under the heart with your cannon to create a clear firing path before destroying the last node. There are quite a lot of jetpack foes to recharge your arm cannon. Once you destroy the last node, run underneath the heart and blast away with your gun and arm cannon as it will eat a huge chunk of the heart’s health. Once the heart is defeated, end the level to earn the achievement.

The screenshots below show the layout of the arena and where to be after the 2nd shields are destroyed. 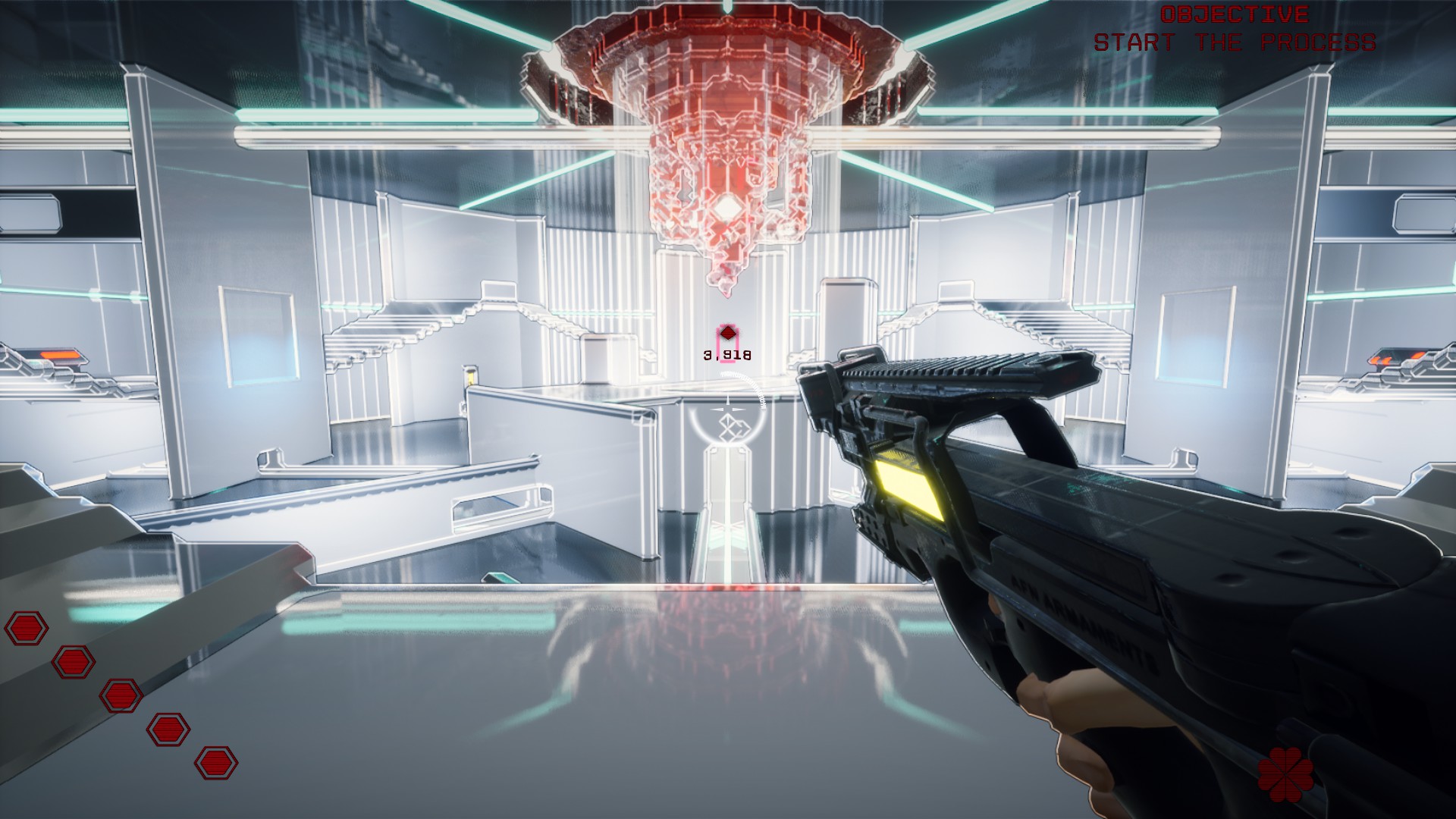 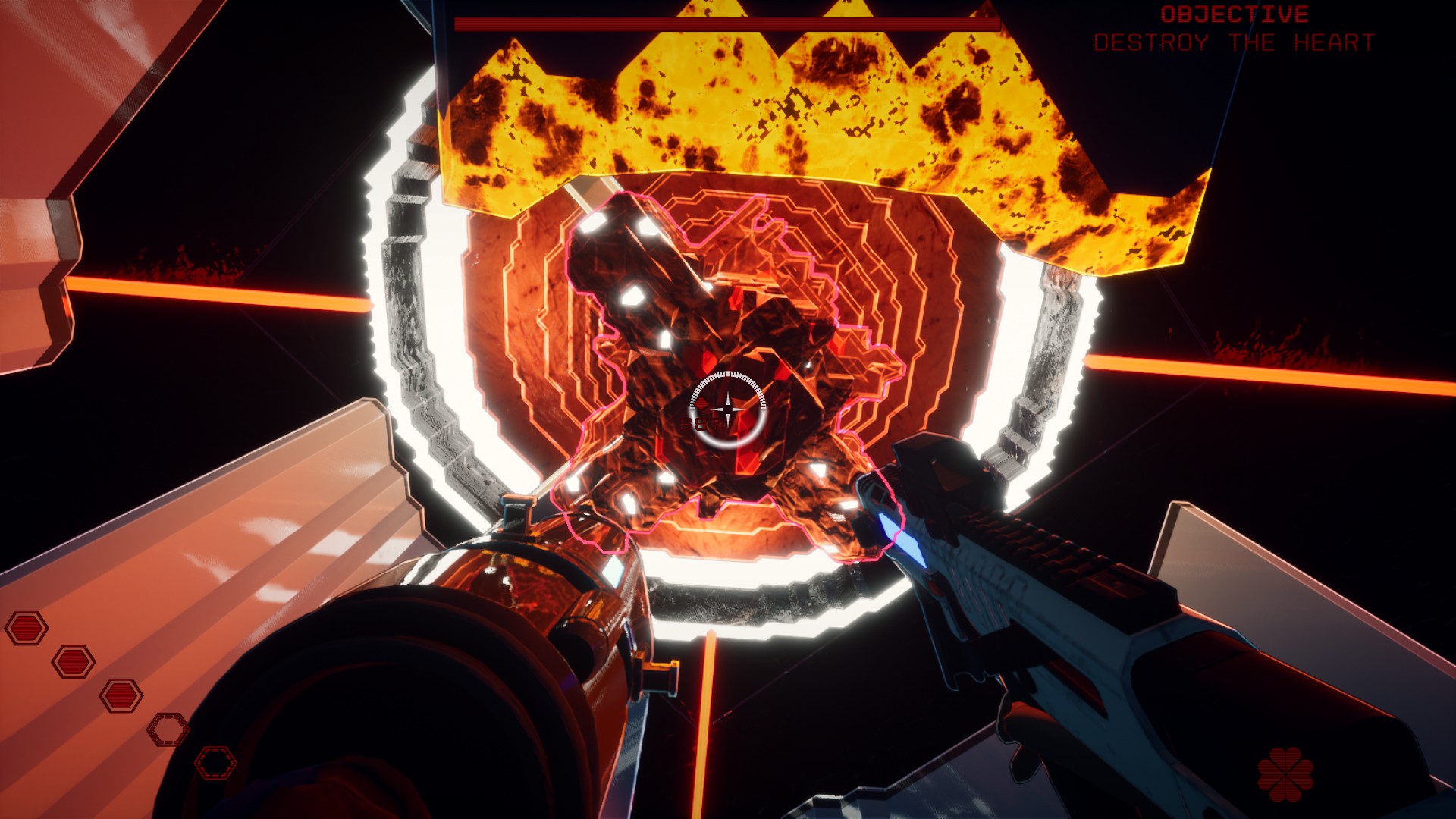 Thanks to Greylock Studio for creating the game. And thank YOU so much for reading!

Please rate this guide and feel free to comment below with any additions to be made for this guide, I will try to update as soon as possible.

Here we come to an end for the Severed Steel Achievement Guide – Severed Steel guide. I hope this guide has helped you with your gameplay. If you have something to add to this guide or believe we forgot some information to add, please let us know via comment! We check each comment manually by approving them!