Or how not to get buttblasted by 10+ Order factions in the first twenty turns.

I. Ignore the bald advisor man.

Hi, so I only play Legendary/Very Hard battle difficulty and I noticed there wasn’t much information out there for Daemons of Chaos other than people complaining that the campaign is rigged or too hard. The truth is much simpler: Your starting position is absolutely awful and your starting army is trash.


So what is a poor Daemon Prince to do? 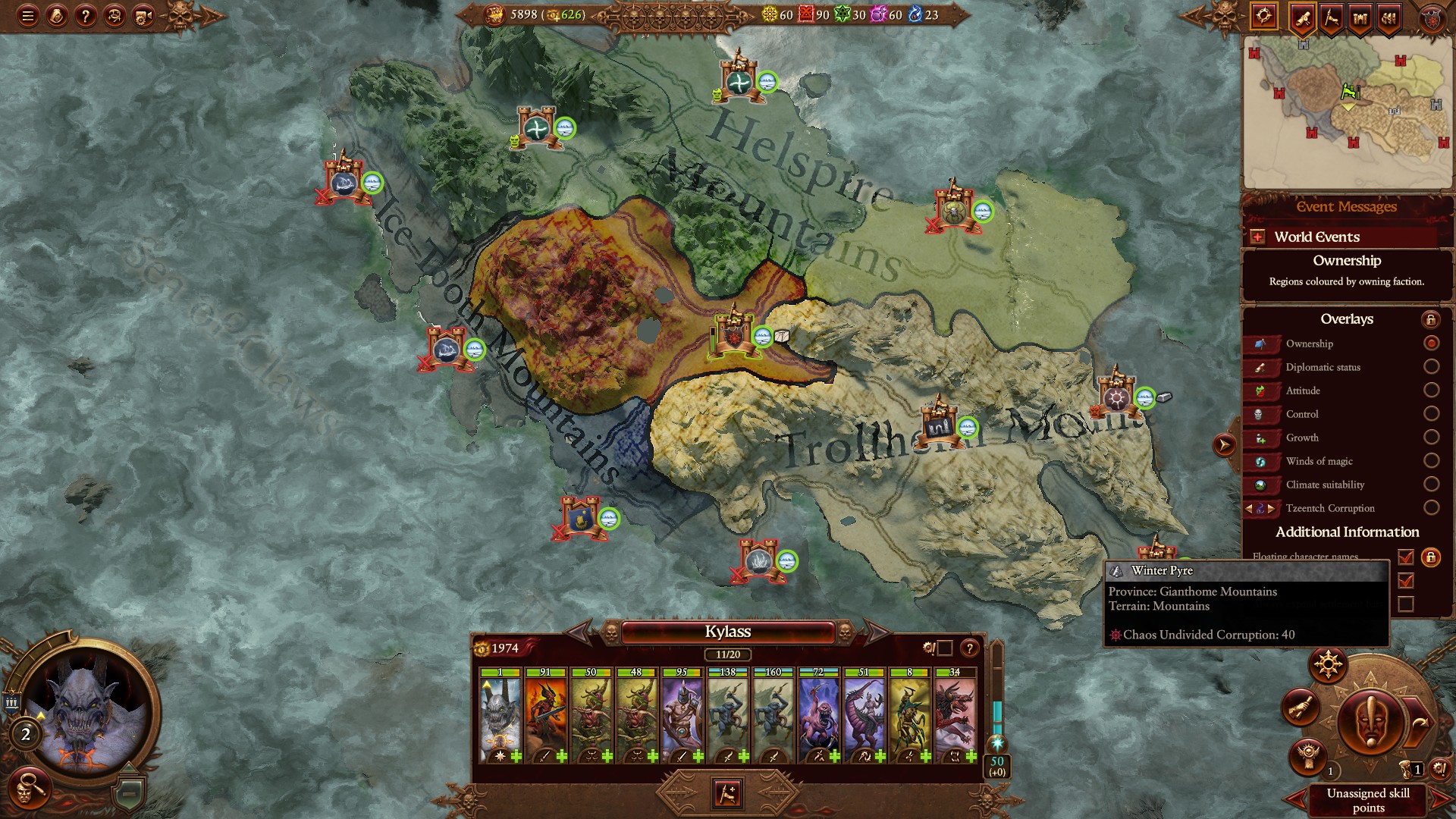 Destroy the Nordlanders, then resettle Doomkeep. Your first dedication is important since we won’t be here for very long. My recommendation is that you dedicate to Slaanesh so you get the marauders with +anti-infantry. Yes, they’re paper, but they have high melee attack for a tier 1 unit and +anti-infantry which we’ll need. The Slaanesh hero also gets some shadow spells for an early pendulum. 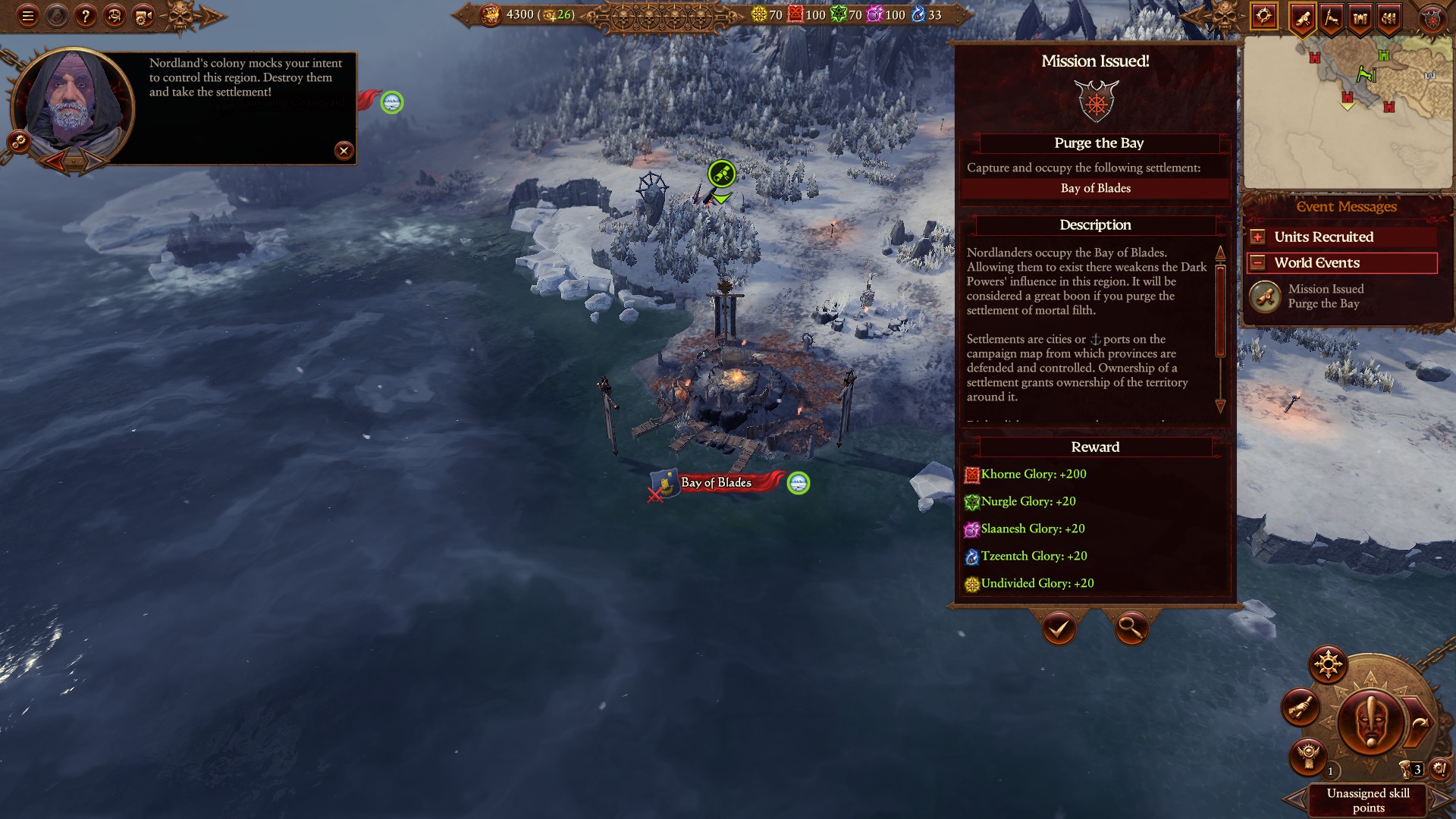 Bald man advises you to take the Bay of Blades. Bald man is very smooth brain. Yes, the rewards are enticing, but take a look at your starting location after taking just Doomkeep. 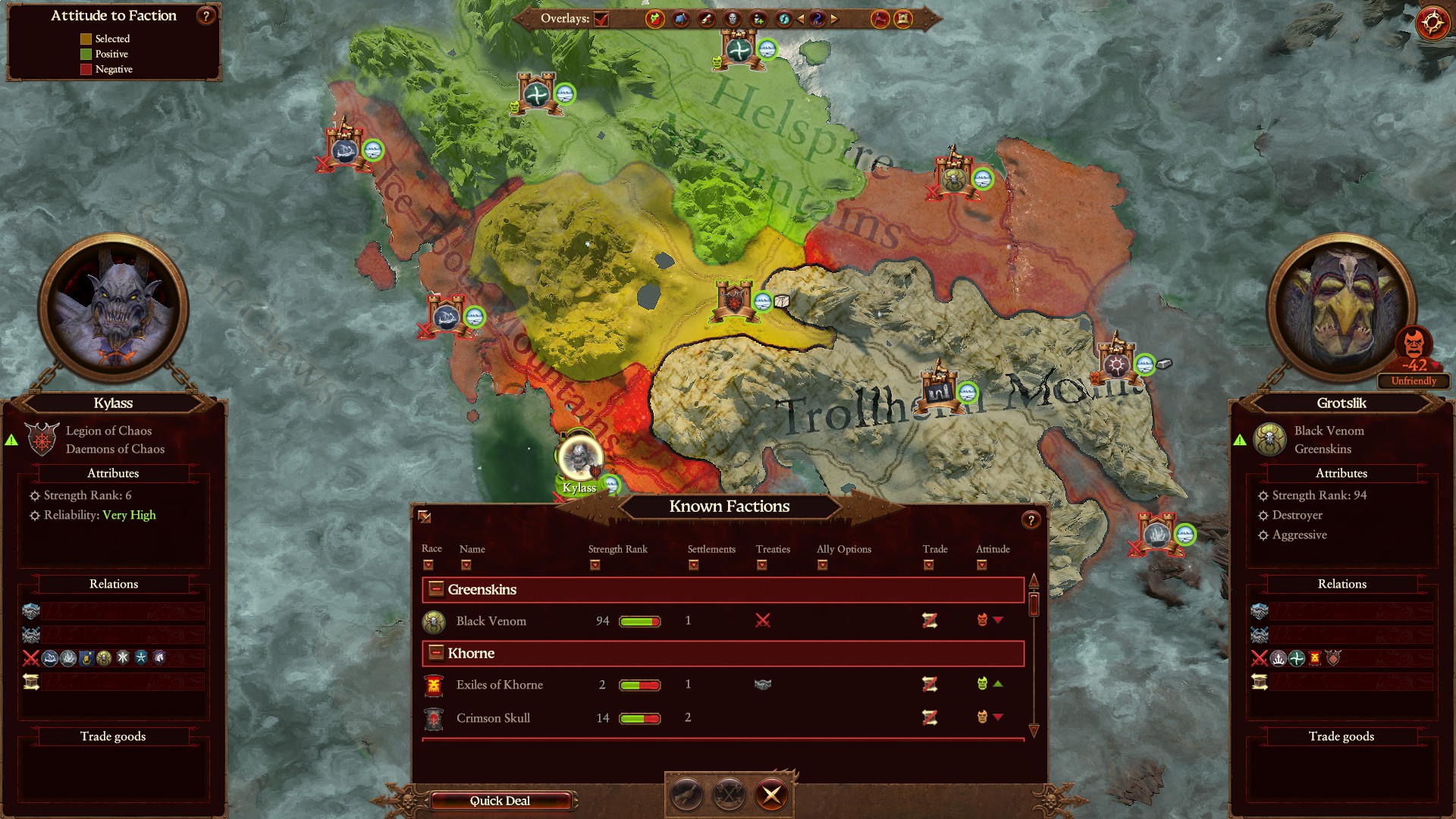 You have orcs to the north who will gladly take advantage of you trying to claim your first province. Two Norscan tribes are also having serious misgivings with you. All of Kislev (especially Kostaltyn) is ready to shove fifty bears up the peninsula. This is not good, especially on Legendary where AI is typically biased to focus on the player. This is especially prevalent when the AI has no one else to fight which is common early in the game. 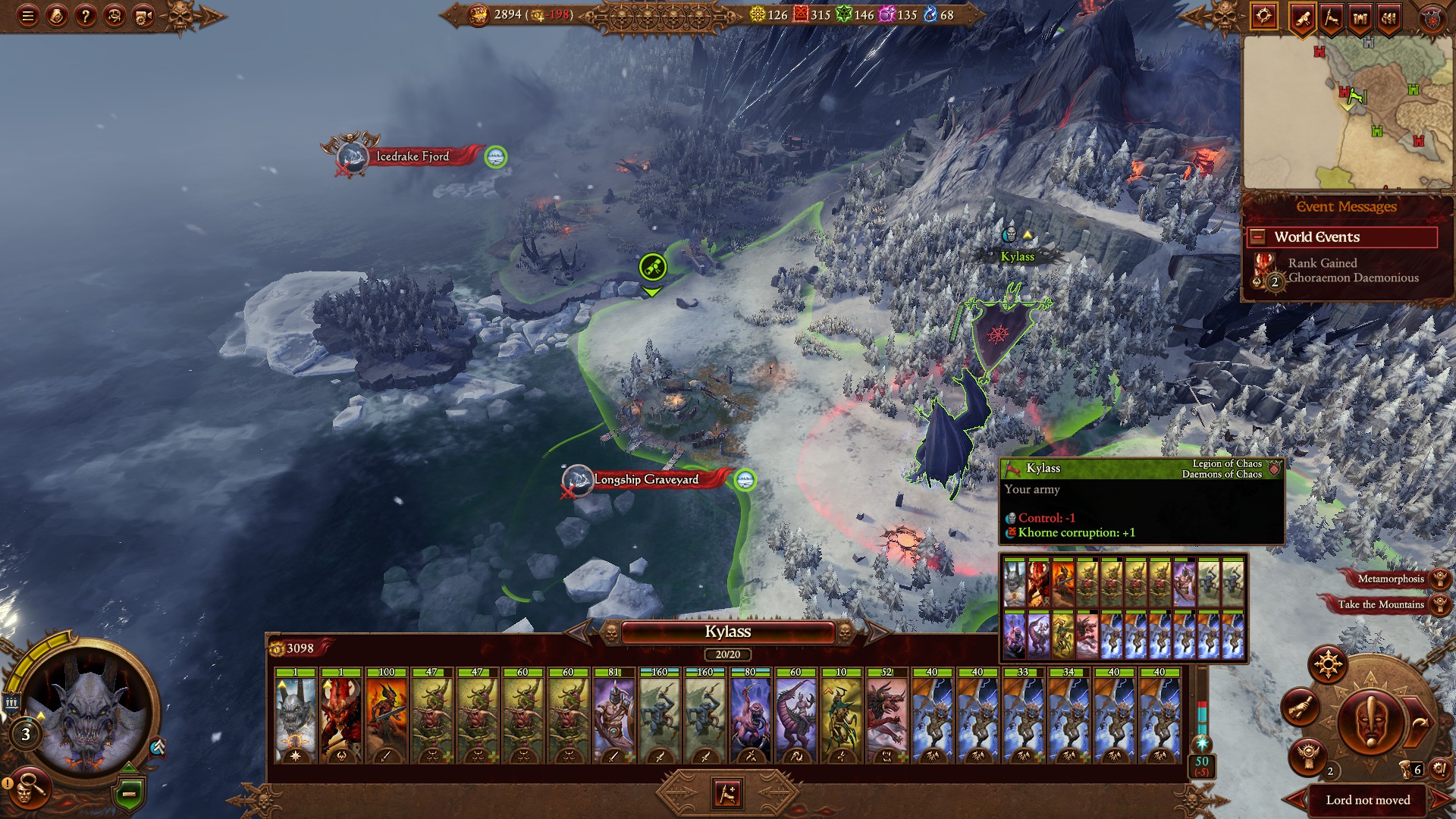 After taking Bay of Blades, you’ll incur the wrath of everyone else in the Gulf of Kislev, namely the Wood Elves of Laurelon and the Druzhina Enclave (with 4 settlements). As Chaos, you’re automatically at war and your allies don’t join when you discover them.

Bald man, in his infinite Tzeentch wisdom, also wants you to continue up the coast line slaughtering Ingerssonman and his norscan buddies to round off your province. Let’s say you take his advice. . . 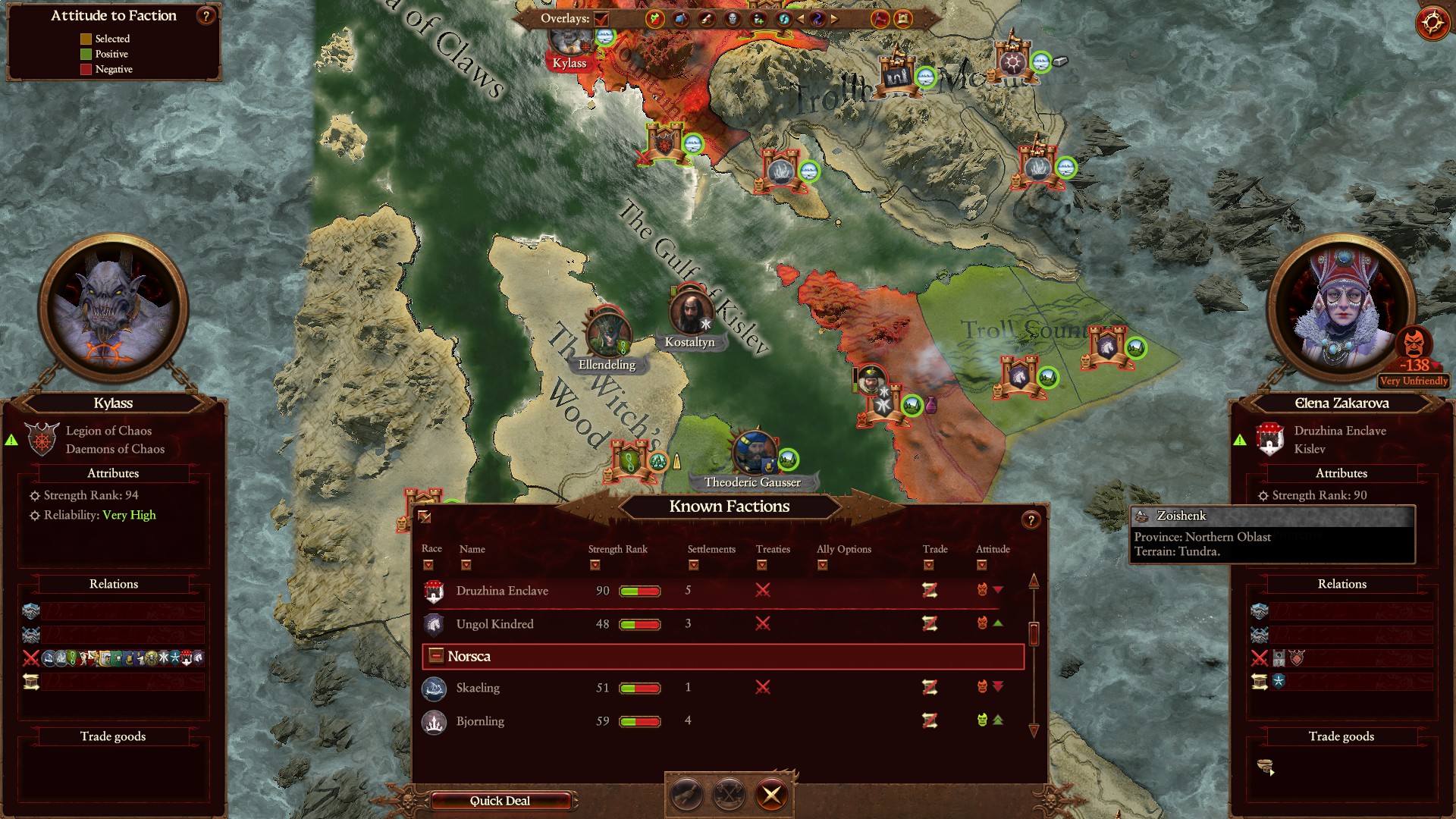 Oh, whoops. You have access to the Sea of Claws now and half of the Empire is ready to start some crusades of their own. Make no mistake: THE AI WILL COME FOR YOU.This is barely even the first five turns and you have effectively screwed yourself. I know there are some people who are gluttons for punishment and might like the idea of an impromptu “This is Total War” campaign, but fighting 10+ order factions off with basic Horrors is not my idea of fun, especially when you can’t even secure your own province. 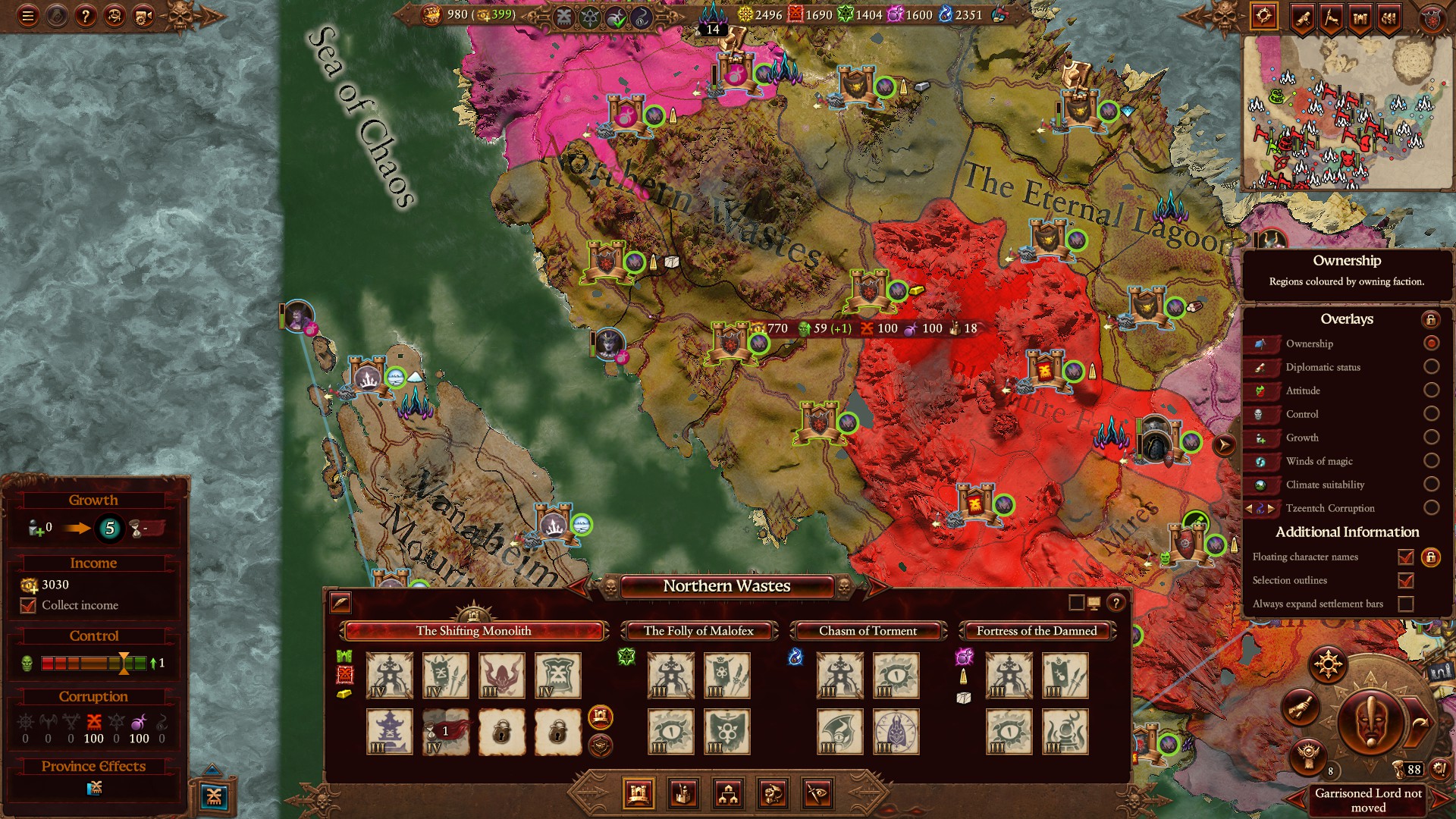 Here’s turn 88 of my latest DoC Legendary campaign. It’s sloppy, but hey, I’m alive and actually taking the fight back against a 30+ region Kislev instead of being extinguished in the first ten turns.


When you start your DoC campaign, my recommendation is this:

3. Advance to edge of northern region (towards Northern Wastes province)

5. Leave Doomkeep to its fate and start force marching through the Graeling regions (it’s okay to NAP/Defensive Alliance/Mil access them if you wish)

6. Head straight for the Northern Wastes, beeline to the Shifting Monolith.

7. Declare war on Kvelligs and try to catch their main army in an ambush.


The great thing about the Chaos Wastes is you AREN’T going to be swarmed by factions automatically declaring war on you. Furthermore, you’re far enough that Kostaltyn’s crew will likely never get far enough north to harass you. At most, I had a full stack of Norscans and those starting Orcs give me some trouble in the first twenty turns, but once you get a chance to pump out some Chaos Warriors of Khorne or Bloodletters, you are going to be solid.


*N’Kari will likely take some of the Northern Wastes. That’s fine, N’Kari’s early game armies are absolutely garbage when going up against a wall of Bloodletters. Seriously, those guys destroy nearly everything in the early game. You’ll beat back N’kari easily enough.


*With DoC’s skill line, it’s very easy to ally nearly every Daemon faction in the game. It’s up to you if you’d rather have a wall of allies in the Northern Wastes while you go crushing the South or if you’d rather build up a massive base in the north by slowly picking apart all the Daemon factions. Either way, your campaign is far more manageable here than in Doom Keep.


*The Daemon Prince is a garbage Legendary Lord as you’ve probably learned by now. Still, make sure to get him his early Nurgle prince wings and Khorne tail that give him damage over time effects while fighting a unit. His damage output becomes enormous then, provided you give him armor items/parts to keep him somewhat tanky in combat.


*If you wait around long enough, Skrag will eventually start ripping through the Empire and giving the Ordertide something else to think about than seismic slamming Doomkeep repeatedly. Remember, Doomkeep’s province isn’t that great outside of the ports providing income. With the right skills though, you can -30% upkeep on your daemon-specific units. Still, I’ve found it much easier to contend with Ordertide once Skrag starts stomping the south.


*Don’t forget to leave heroes in your Chaos Wastes provinces to close those pesky portals.


Anyways, hope this guide helped. DON’T FOLLOW THE ADVISOR’S ADVICE. Follow this guide, beat Kvellig, and I promise you’ll at least survive long enough to get to the mid/late game as DoC instead of being absolutely thrashed and never getting a breather.

Here we come to an end for the Surviving Legendary Daemons of Chaos – Total War: WARHAMMER III guide. I hope this guide has helped you with your gameplay. If you have something to add to this guide or believe we forgot some information to add, please let us know via comment! We check each comment manually by approving them!