The Best Squad Triangle Guide applies to all tactical and logistical responsibilities of 1) the commander, 2) the squad leader, 3) the fire team leader and 4) the squad member. It is NOT about points or kills. To be the best squad every member must ensure they have all three sides of the triangle present. You cannot be the best squad if one of the sides is missing. This guide is not meant to detail each and every possibility to achieve success but rather to bring forward a concept that can be applied to anything that takes place on the battlefield and win or lose, to be the best. 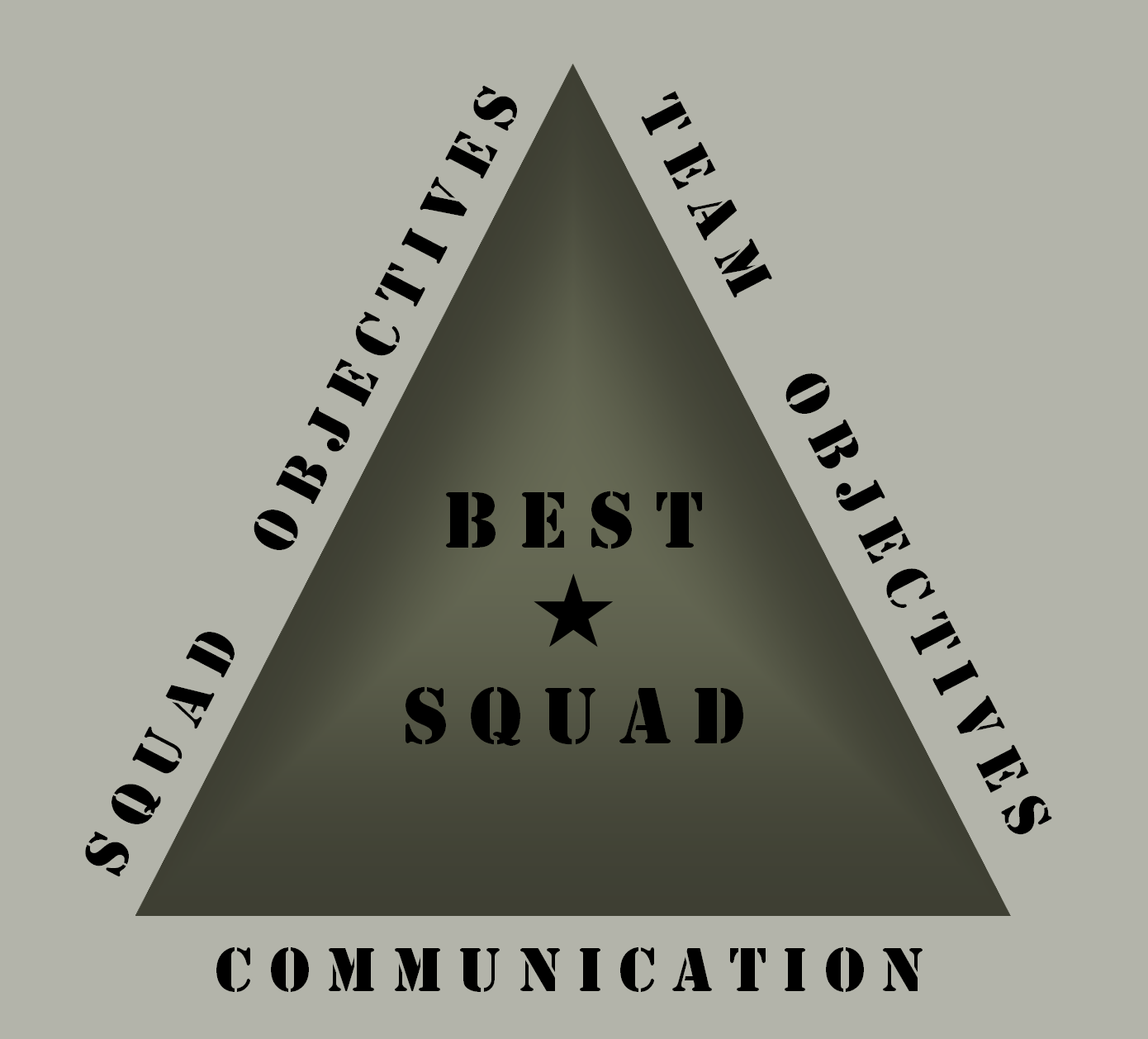 Responsible for all squads and the team’s objectives.

The Commander is responsible for the entire team. It is his/her duty to ensure the team’s objectives are being met. Always keeping one eye on the map to check for attacking opportunities and defensive requirements. He should always be thinking two steps ahead of the battle and ensure his team are aware and capable to complete their objectives.

Typically the commander should be more pa*sive. Set up a defensive F.O.B and operate from it. Being front line at the tip of the spear will restrict the efficiency of his main aim. Keep a light armoured vehicle for mobility. He should ensure his squad are set to task whilst keeping them close when required to react. Build HABs when the other squads are focused on attacking or under heavy and sustained attack.

Give orders to squads, make directed requests to complete objectives. Mark the map. Request squad leaders to identify significant events and for key locations to direct command a*sets to. When requests are made to him directly they should be accepted, delegated or denied but never ever ignored. Give positive recognition to other squads for both success and for failure.

The Squad Leader is responsible for his squad and NOT for other squads. Too much time is wasted focusing on what other squads are doing or not doing. If the team is not completing or trying to complete objectives, you can’t fix that alone so don’t try to. Be supportive, be the best squad. Focus on your own squad’s objectives and a*sist the commander with the team’s objectives.

Create an environment in which you, the leader brings out the best in people. Don’t be a micro-manger. Allow your squad members to carry out their chosen role and direct them towards the squad’s objectives.


– Infantry squads are directly responsible for building habs and maintaining control of logistical vehicles as well as all ground operations.

– APCs and IFVs dominate when supporting and are supported by infantry.

– Mortar teams should always have or be waiting for a target.

– Armoured squads deal with armoured threats but should also ensure they have an FOB repair station built for them. Utilise all seats in heavy armour and don’t lock the squad at two players.

– Heli pilots should be working non-stop resupplying FOBs and transporting troops to and from safe locations.

Set a squad name with it’s main aim and your requirements. Communicate to other squads to set the initial plan. Before leaving main set the standard with your squad and communicate an introduction with an initial squad objective. Carry out a directed mic check and don’t ask “does everyone have a mic?”


Give direct orders to squad members. Don’t say “someone come with me” or “someone go to..” Choose a squad member and give them the order. Request that your squad communicates significant events that will directly affect the squad or the team. Direct question squad members for intel when needed. Relay important information to other squads. Mark the map.


Command chat gets hectic so ask squad members to repeat what you missed. Listen and respond to your squad members.


Regularly reinforce the squad objective and always do so when you are respawning. Always give a spawn location.


Give positive recognition to squad members for both success and for failure.

Responsible for the fire team’s objectives and a*sisting the squad leader.

The fire team leader carries the ability to mark the map. Marking the map provides the team with key information that will a*sist them.

FTL is often switched around for ease of marking but it doesn’t have to be so. Each FTL can maintain the responsibility to “mark enemy radio on me” when shared by a squad mate. Carry out your duties as FTL as given to you by the SL. Ensure the fire team is focused on the team and/ or squad objective. Set and build fortifications around the FOB when needed.

Relay important information to the SL and mark the map. Give suggestions to the SL based on what you can see and what you know. Call out enemy locations and mark them with the FT marker.


Set a keybind (or mouse thumb button) for your observe marker via SETTINGS/ CONTROLS/ VOICE/COMMAND/ PLACE OBSERVE ORDER. You don’t need a key for each order. Observe is sufficient and quickly directs the squad to your mark.

Responsible for carrying out his or her chosen role for the fire team’s / squad’s objectives.

In order to benefit the team the squad member should a*sist the squad leader by using their chosen role effectively and to communicate intel to them.

The squad member should utilise their chosen role to help with the successful completion of the squad objectives.


– Medic – use the map to check for downed team mates. Use smoke for concealment. Prioritise other medics before others if safe to do so. Prioritise the SL over other squad mates. In situations where there are many casualties give a brief health boost to revived team mates to a*sist their stamina before reviving the next team mate. Tell them directions of enemy fires as you revive them. Ask them so stay close to heal ups.

– Rifle man – Use the map to ensure you are near to your anti-tank squad mates. Tell them ammo is available when needed. When revived drop your ammo bag. Pick your ammo bag up before moving out. Consider leaving it at rally points.

– Anti-tank – Don’t go tank hunting away from the squad. When moving to destroy a vehicle request rifleman support. Find out the best places to deal most damage to vehicles.

– Light machine gunner – Provide covering fire from rear or flanking locations into avenues of approach whilst concealed or covered as much as possible.

– Grenadier – use coloured smoke to mark enemies. Smoke enemy locations NOT your own team’s locations unless heavy smoke cover is required to a*sist an evasive or tactical manoeuvre.

– Marksman – set up in ranged locations with overwatch, cover and concealment and provide intel to the squad.

– Combat engineer – place mines at choke points in roads. If you are on an enemy radio place a C4 charge then start digging it down. Count to 20 then run into a concealed location with line of sight to the radio. This will ensure the radio will be “on bleed” and you won’t need to return to it whilst the defenders return to save it.

– Crewman – when getting into the vehicle make sure your tool box is equipped in hand. This will speed up the repairs when they are needed. Find out where best to target on vehicles for maximum damage.


Don’t spawn in locations other than those given by the SL. Stay with the squad unless instructed otherwise.

Communicate important information to the SL, in particular that which should be marked on the map. Offer suggestions based on what you can see or what you know. Don’t give a life story when one sentence is all that’s needed. Use local comms more than anything else.

The best squad will be fulfilling all three sides of the triangle. Coordinate with the team to complete team goals. Work towards the successful completion of squad objectives. Communicate efficiently and consistently.


I hope you enjoyed this guide and found some use from it.


How do you ensure you are the best squad? Share your experiences in the comments below.

Here we come to an end for the The Best Squad Triangle Guide – Squad guide. I hope this guide has helped you with your gameplay. If you have something to add to this guide or believe we forgot some information to add, please let us know via comment! We check each comment manually by approving them!