The Culture Slingshot – how to use the World’s Fair and saved Great Writers to create a cultural revolution and launch your ideology into the third tier within mere turns of opening it.

The Culture Slingshot – a guide to combining two game mechanics into an overpowered cultural revolution in Civ 5 – BNW.


Great Writers and Great scientists can be used up to gain large quantities of culture or science, respectively. This is commonly known as “bulbing”.


When “bulbed”, Great People create resources based on your empire’s generation of this resource over a number of turns up to the turn you press the button, modified by game speed.


The plan – crafting the Culture Slingshot


We want to set up a condition where we generate the most possible culture in a short number of turns, then “bulb” a stockpile of Great Writers to capitalise. Ideally we have lined this up with the opening of our Ideology, and will gain access to third-tier Ideological tenants almost immediately.

The “how to” for this is fairly straight forward –

We want to have our ideology open before we bulb our Writers, but we absolutely cannot delay bulbing the Writers past the final turn of the World’s Fair bonus period. If this happens, bulb the Writers anyway and take the additional policies outside of ideology. This isn’t optimal, but it’s still better than fizzing completely and losing the double-culture bonus.


You can do some weird things here for fun when you miss the ideology timing – full Trad + Liberty, take order and go for a late wide-tall expansion? Max out honor, take Autocracy and start a war? Patronage and buy every single city state? You’ve already stuffed this game up now, so have some fun with it.

So you’ve pulled off the slingshot, and successfully bulbed three writers right after opening ideology, allowing you to pick the two free ideology tenants, plus four more from your writers, and found yourself in the 12th century with a fully fleshed out Ideology and access to a third tier ideological tenant.


Game changingly overpowered, you crush the game from this point and wonder what is next. Can it be done better? Why, yes it can.


Warning – this section is essentially impossible on deity, and can be extremely difficult to complete on Immortal.


Piety offers us two more mechanics that can synergise with our Culture Bomb.

The faith, culture and policy requirements for this are difficult to sustain. I recommend trying to make this work with Poland first, though both Aztec (culture from kills) and Shoshone (ability to choose ancient rune benefits, best on large maps) also have bonuses that can make this possible. You will require a strong start – best suited to a Petra capital start with Desert Folklore – and excellent mechanical gameplay.


We still open and complete Tradition as normal, as to do otherwise is always actively detrimental to our game play long term. After completing Tradition we focus on making our way through Piety. We need to make sure to build The Oracle, and be mindful of any reasonable culture we can obtain, as we need to be at least 5 tenants deep in Piety (opener + 4) before we win the fair, and use the bonus free tenant to complete Piety. This means we build Amphitheatres and Opera Houses earlier, always mindful of not delaying science and growth. If we are Aztec, we start and fight constant wars with our ranged units mulching AI units to generate culture.


It may be required to delay our entry into Rationalism to complete Piety in time. This is not ideal but still beneficial overall if the build is completed correctly.


For our religion, we need to focus on turning faith generation into planting as many Great Prophets as possible. Accordingly we must take Messiah as our Enhancement belief. I do not recommend ignoring Pagodas or Mosques as they are simply too good long term, even if the faith required to buy them costs you another planted prophet. Mandate of Heaven in the Piety tree does not impact the cost of Great Prophets.


Hagia Sophiaand theLeaning Tower absolutely must be built for additional Prophets. It is important to game the completion of both of these wonders to occur right after a Great Prophet purchase from faith if possible, as while these wonders give “a free Great Prophet”, they still increase the cost of the next one. You can delay the completion of wonders by making something else and leaving the wonder in the build order with one turn’s work to complete.


The timing is tight and you will try this and partially fail often – commonly resulting in piety not being completed in time to fully benefit from planted Great Prophets for your Writer bulbing. It is very difficult to complete Piety in time if the World’s Fair has not been delayed (if for example, we were late meeting all the AI players).


Executed perfectly, we will have completed the piety tree before the World’s Fair victory with at least four planted Great Prophets to greatly enhance our cultural gains during the bulbing turns. If the Glory reformation belief was taken, try to save enough faith to purchase one additional writer.


It is often possible, and can be quite entertaining, to increase the number of planted Great Prophets by actively hunting for AI Prophets, keeping in mind only Prophets with four spread religion charges remaining can be planted.


Perfect execution can result in at least completed Tradition, completed Piety, 6 Ideology and 4 Rationalism (opener, secularism, humanism, free thought) while still in the Industrial Era. It is important to note that if you took the Glory reformation belief, it is no longer necessary to complete Rationalism, though you should go to at least secularism all of the time, and to Free Thought nearly all of the time. The sheer culture total makes your ideology completely immune to influence from other civs tourism.


The very early access to multiple game-changingly powerful bonuses means the game is now over; you have won, and all that is left is to play out to your very certain, crushing victory, by whatever condition you choose. Even though we have bulbed our Great Writers and Artists, culture victory is still very achievable through the Hotel / Airport, crafted culture method, aided by the planted Great Prophets. 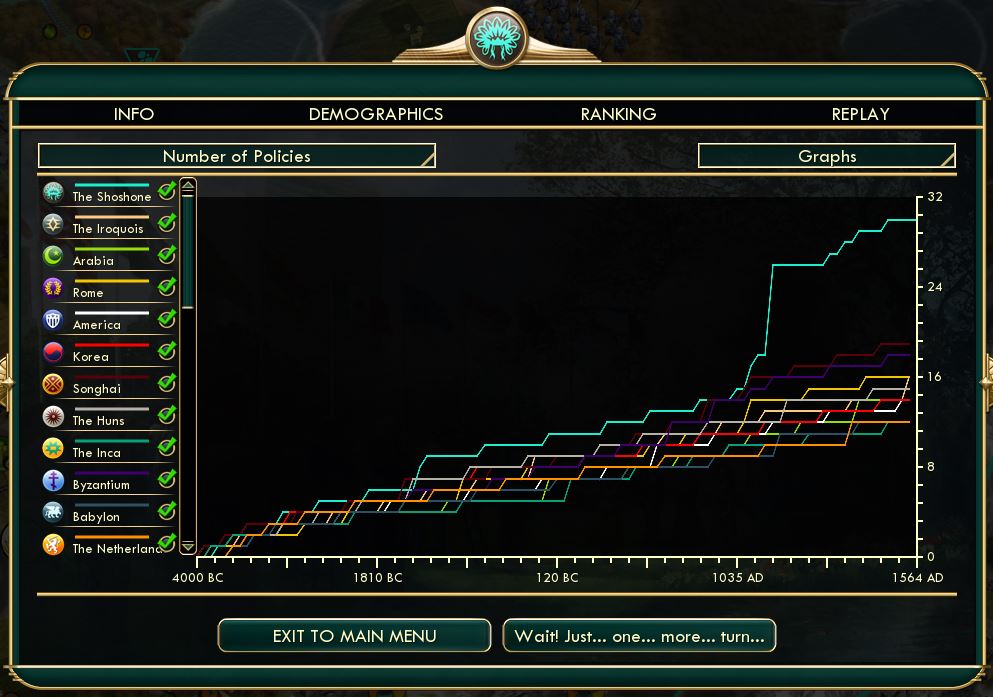 Immortal, Shoshone – perfect execution of this guide results in a 1564 AD diplomatic victory

Here we come to an end for the The Culture Slingshot – Sid Meier’s Civilization V guide. I hope this guide has helped you with your gameplay. If you have something to add to this guide or believe we forgot some information to add, please let us know via comment! We check each comment manually by approving them!