Useful tips and tricks for new players, created during Version 1.01.1.

It is currently a WIP (Work in Progress)

In the current version 1.01.1, there is a hidden speed faster than “turbo”, which happens if you press and hold down the ~ key.

It will save you an enormous amount of waiting when the AI is taking their actions. 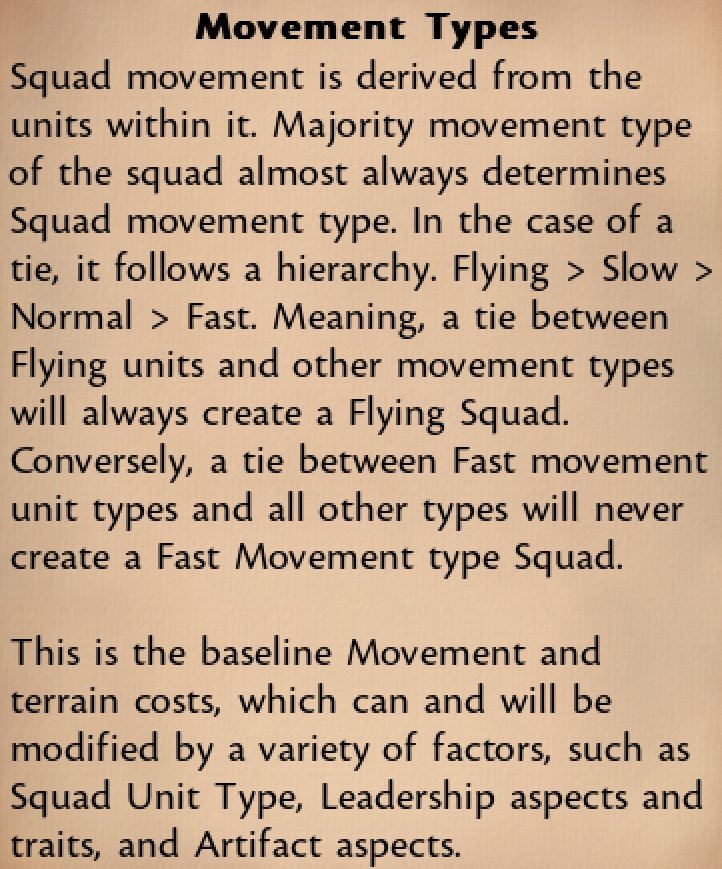 1. A unit with 5 horsebows and 3 archers will have light cavalry mobility. Similarly, a unit with 5 Cavalry and 4 infantry will have cavalry movement (which can make Hospitallers worth using over Templars in certain circumstances) 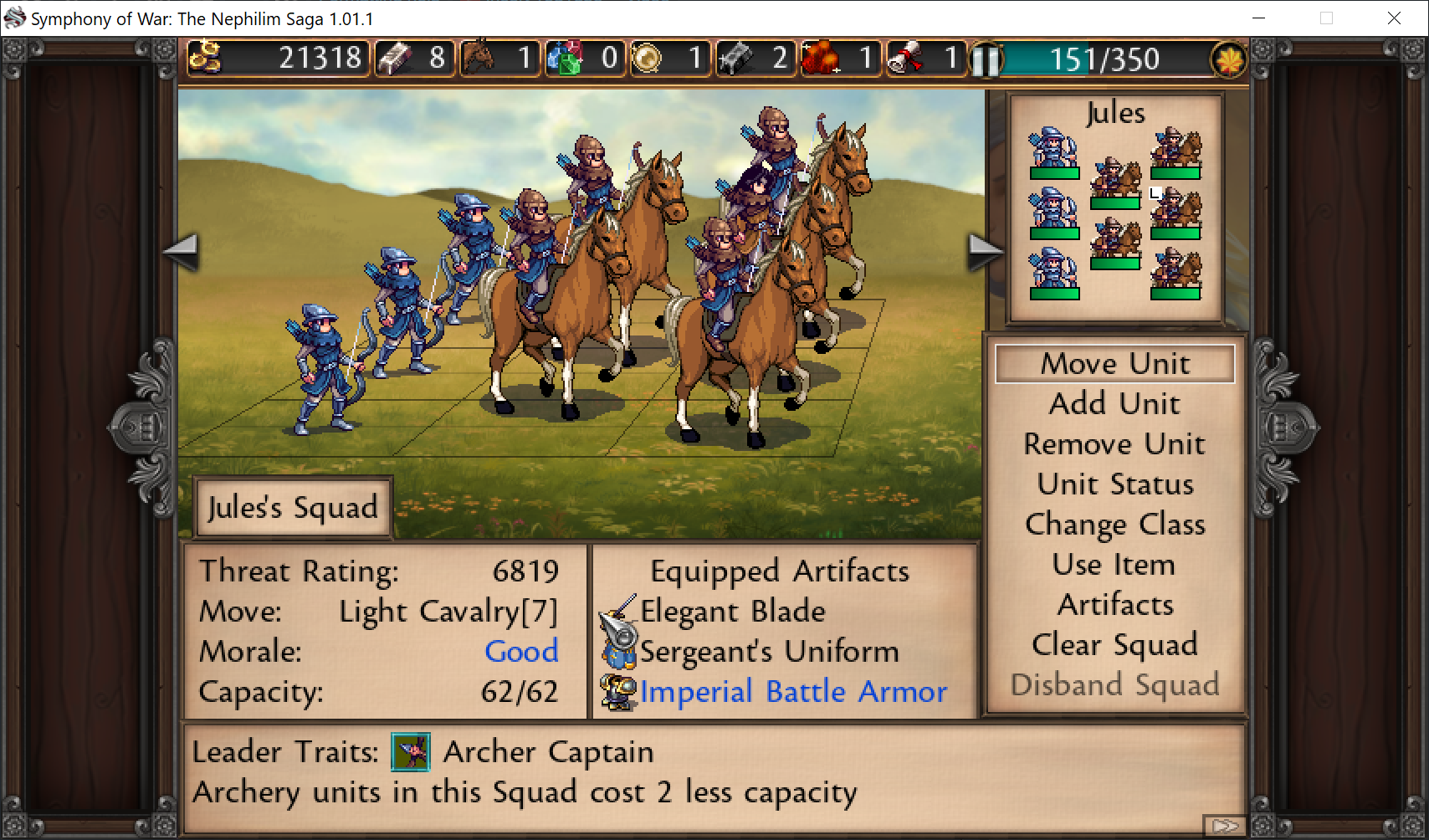 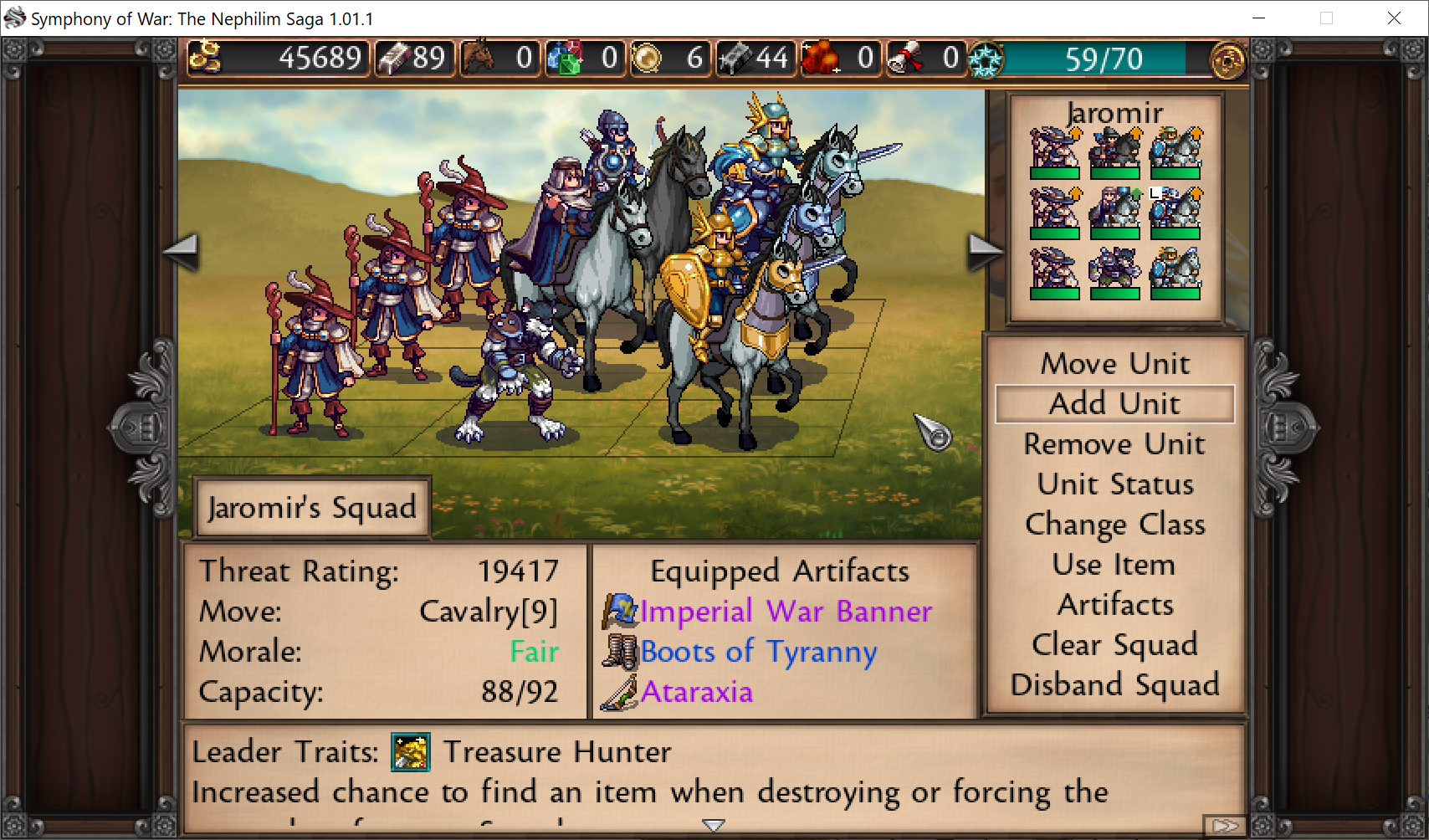 2. Dragons and Horses don’t mix. If they are together in a party, it will become infantry cla*s (5 cavalry, 2 infantry, and dragon = infantry cla*s)

3. Cannons will similarly make a unit instantly either slow or infantry cla*s (depending on techs). 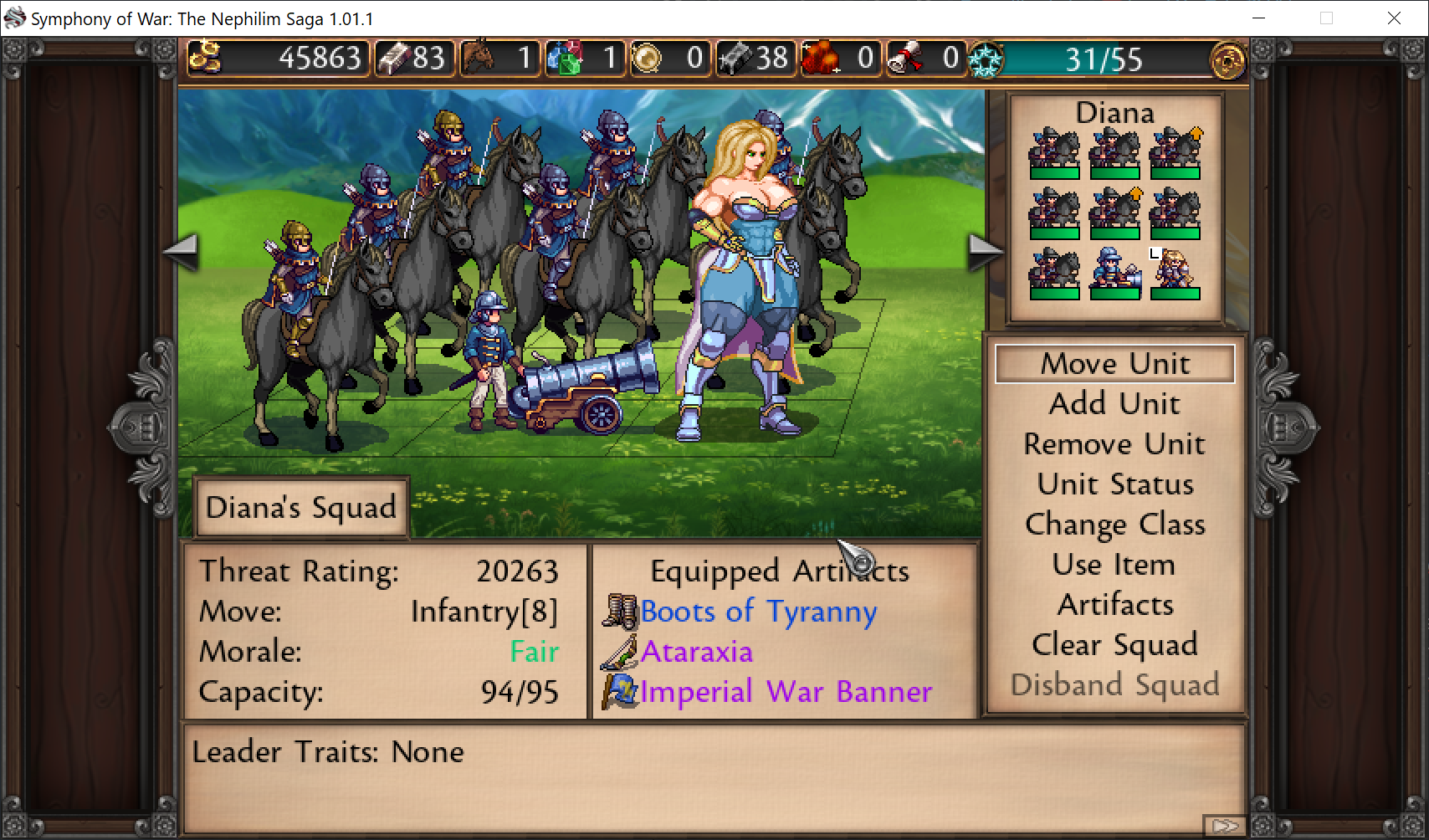 4. If your # of dragon riders = # of other unit types, it will be flying. However, if 1 of the other units is a cavalry, it will become infantry cla*s (Dragons cannot make horses fly!). 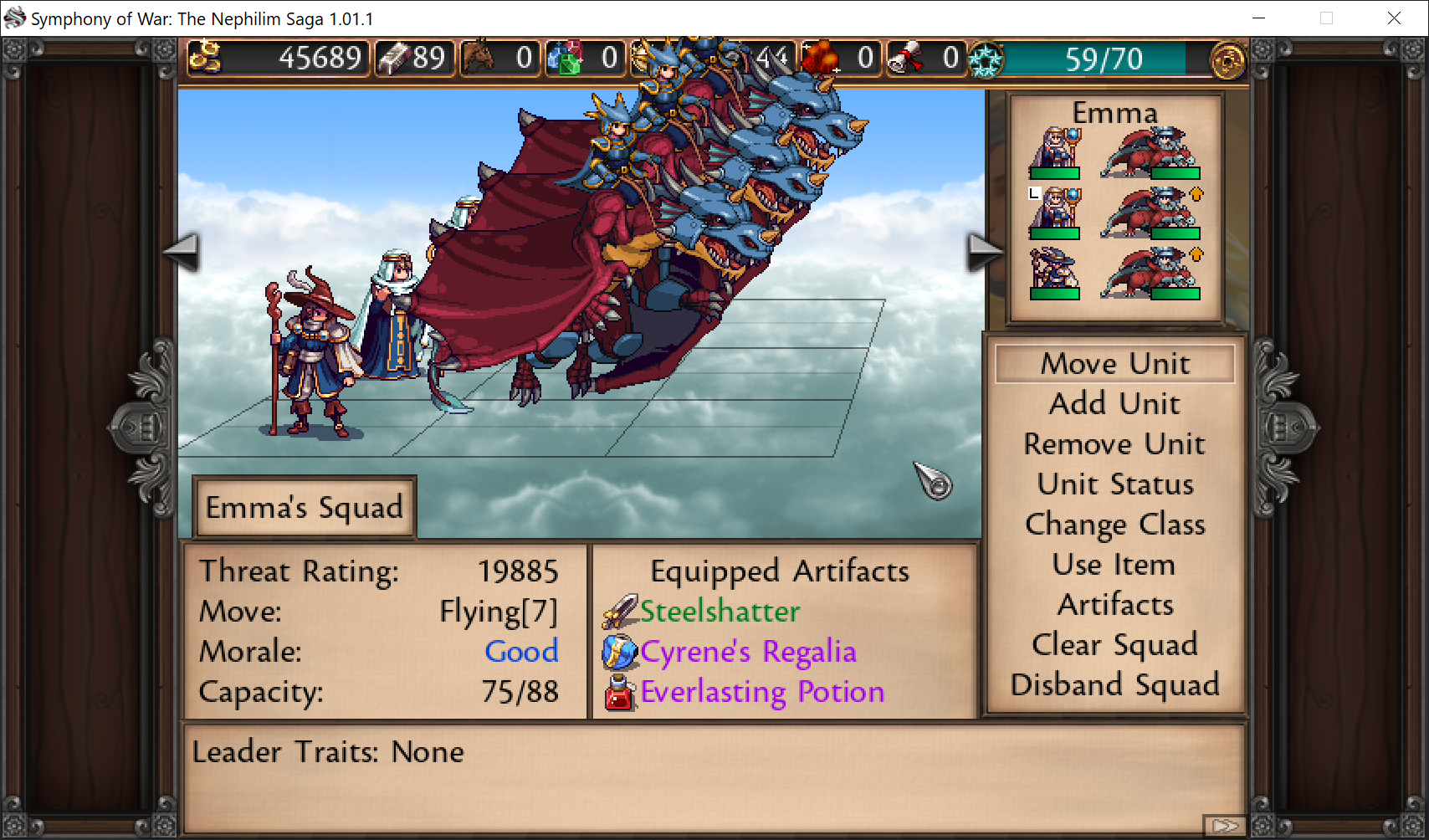 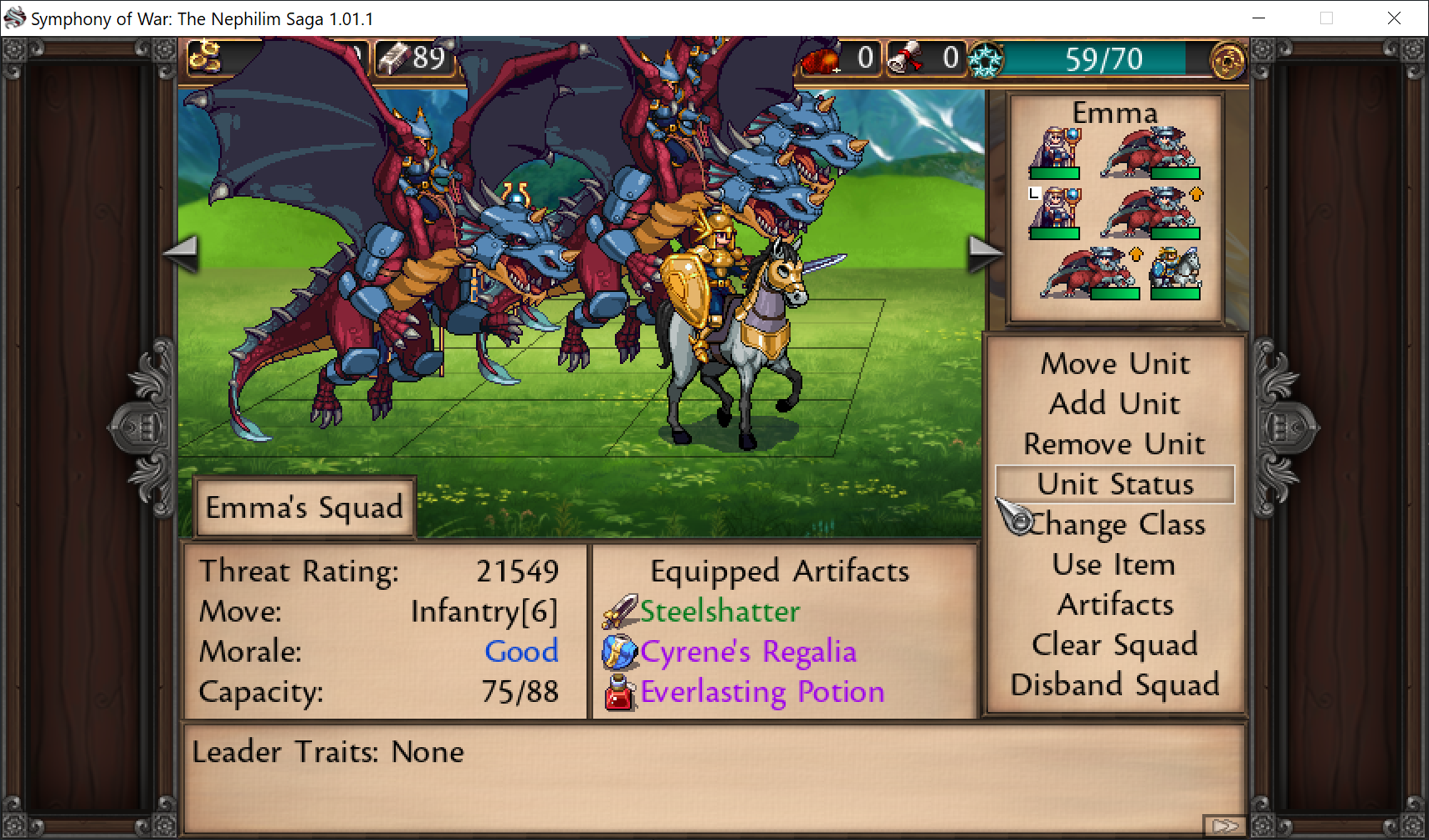 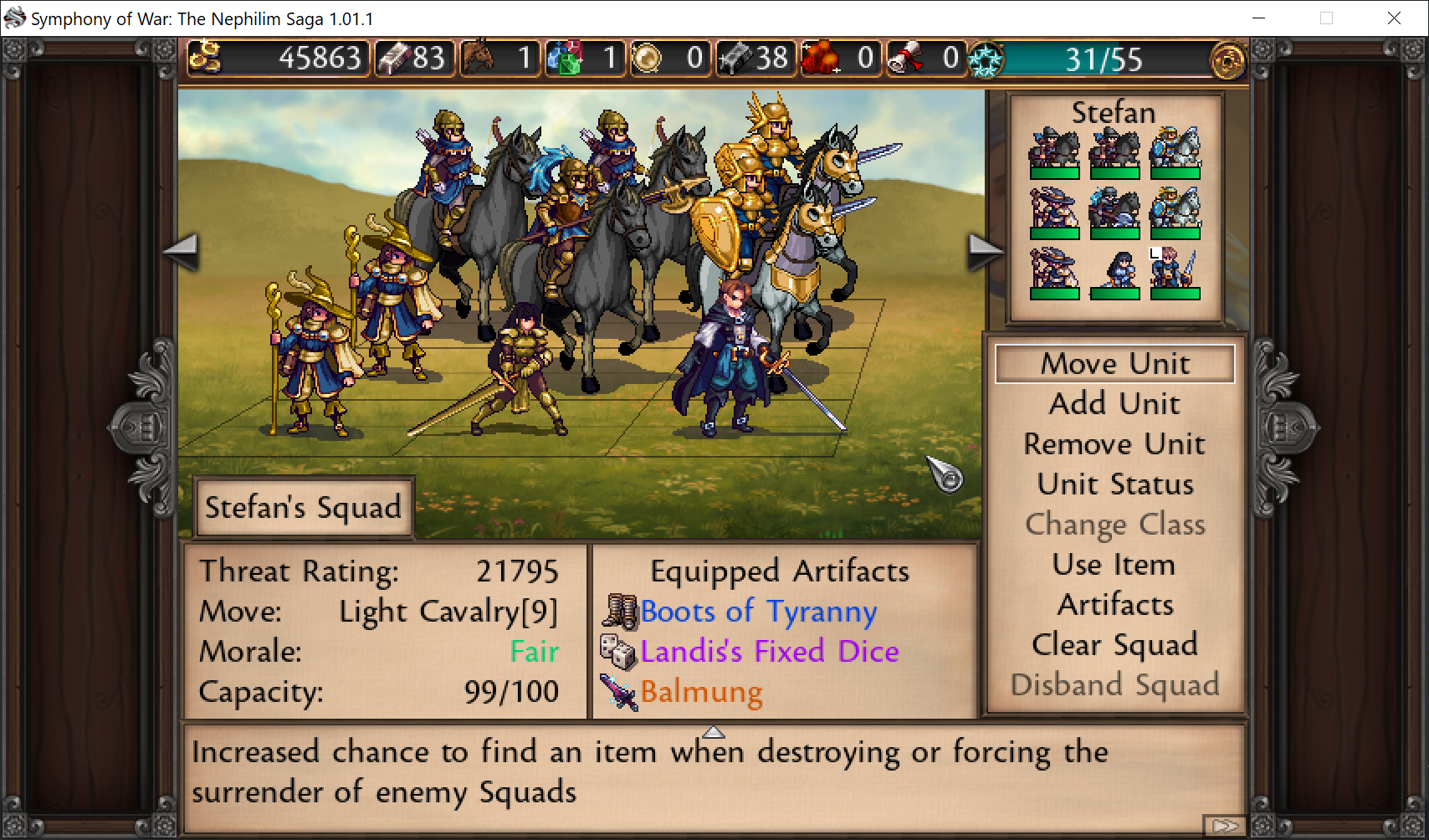 2) Affects hit and crit chance, depending on the weather of the turn (thus, cannot be controlled since weather is mostly random)


The effect of affinities is shown in the image below, but what you need to know is this:

Magic-based units where HP is not an issue: Water or Dark


Finally, affinity stat changes are applied retroactively. For example, if you change from lightning to light affinity, you will see a big increase in your leadership stat, your STR and SKL will drop, etc.

In SoW, there are 4 main methods to earn gold. Using these methods can allow you purchase all the mercenaries and artifacts you come across in the bazaars and markets.

The thievery squad should be your initiator in combat.

They earn gold based on the skill of the characters in the squad, and the amount of damage the unit deals.

Best units to give thievery to:

They should all be lightning cla*s for maximum SKL (aka. maximum profit!)

Important characters that can benefit from thievery:

Named Mercenaries that are good with thievery:


An early-game (Chapter 8) thievery squad could be the following, with 3 thieves in the mid-line. 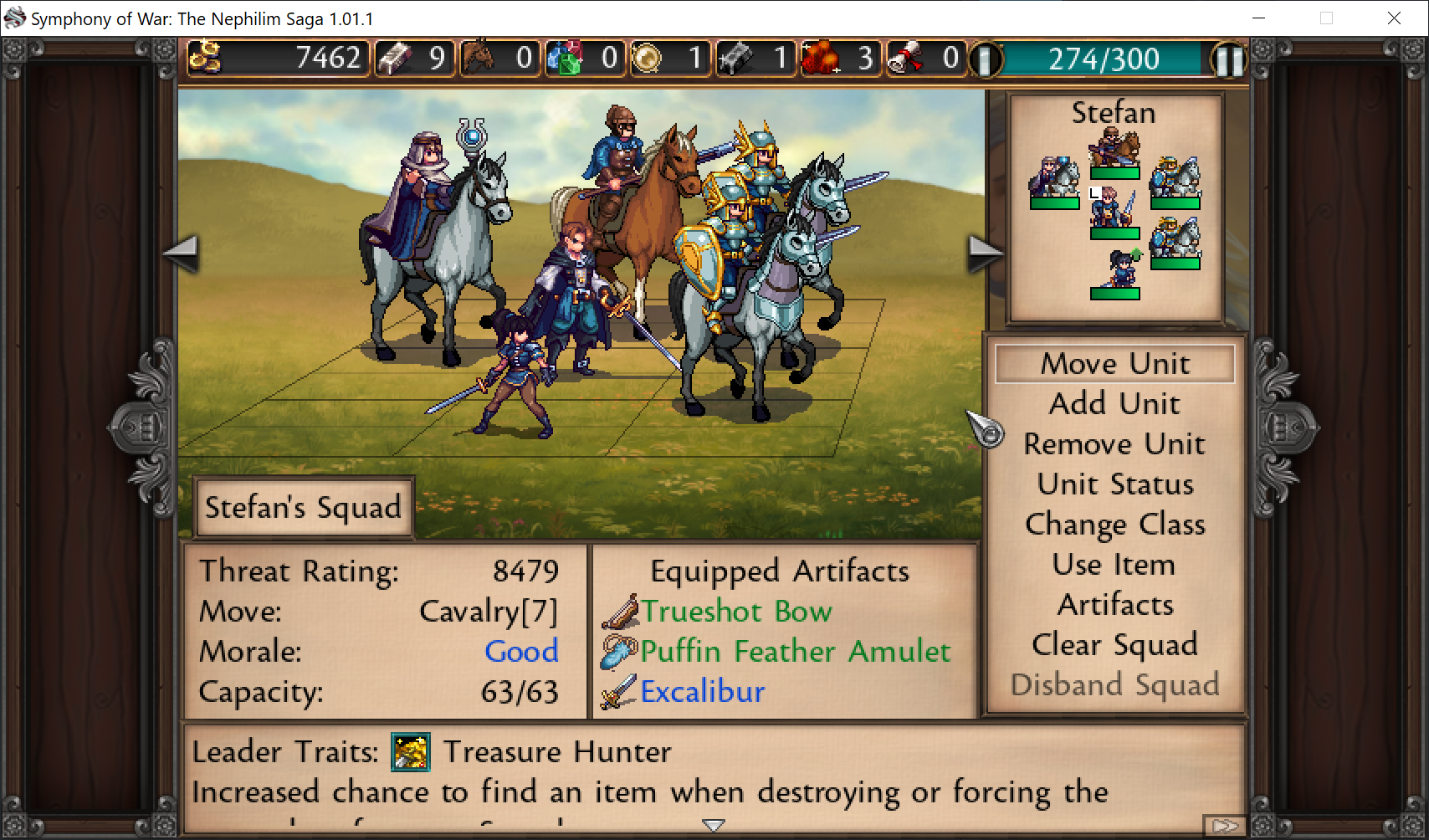 An late-game thievery squad would look like this (only 2 Valkyries don’t have thievery): 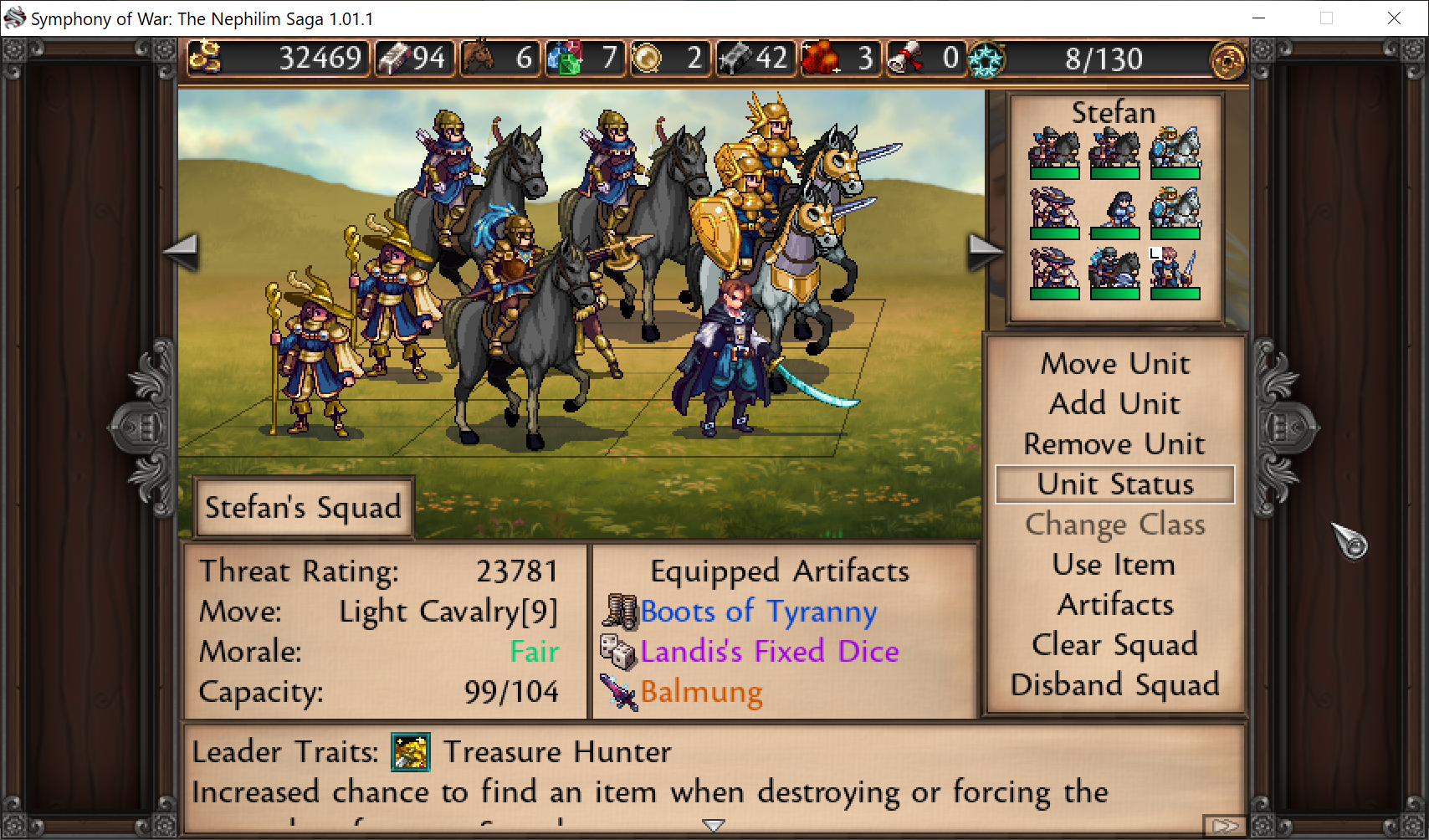 At the end of battle, every enemy unit that has surrendered will give you 1 tech point, and a large amount of gold.

To make a surrender succeed, you need to damage/destroy the enemy morale, with 100% chance of a successful surrender if they have “Shattered” Morale.


Thus, an effective tactic is to:

1. Attack with a party to reduce their morale.

2. Have a 2nd party (preferably with a leader with “Silver Tongue” and/or “Treasure Hunter”) do a “surrender attack”

To maximum surrenders, you should use a party with many melee units with the overpower trait (Deals morale damage based on STR). The melee units will generally target the same enemy, reducing the number of killed enemies and leaving more alive for the surrender.

This is a leader perk. If your unit perform surrenders (or enemy army kills) has Treasure Hunter, you are more likely to have items drop. They can be artifacts, or the really profitable Arena tokens.

Thus, buy the tokens in the market whenever you see them! They can also drop as a reward item from combat during battles.


Here are sample rewards from each of the 4 arena 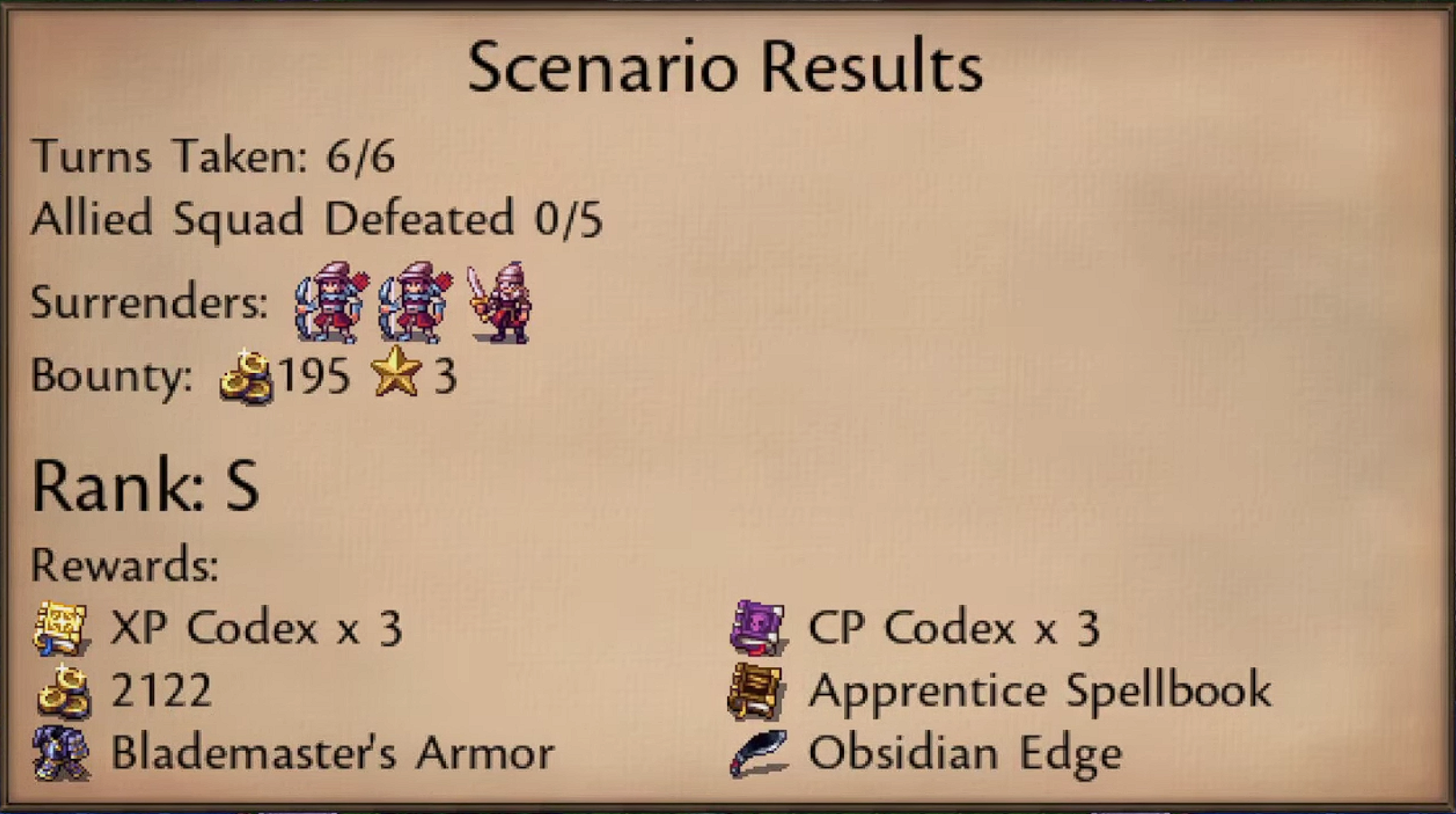 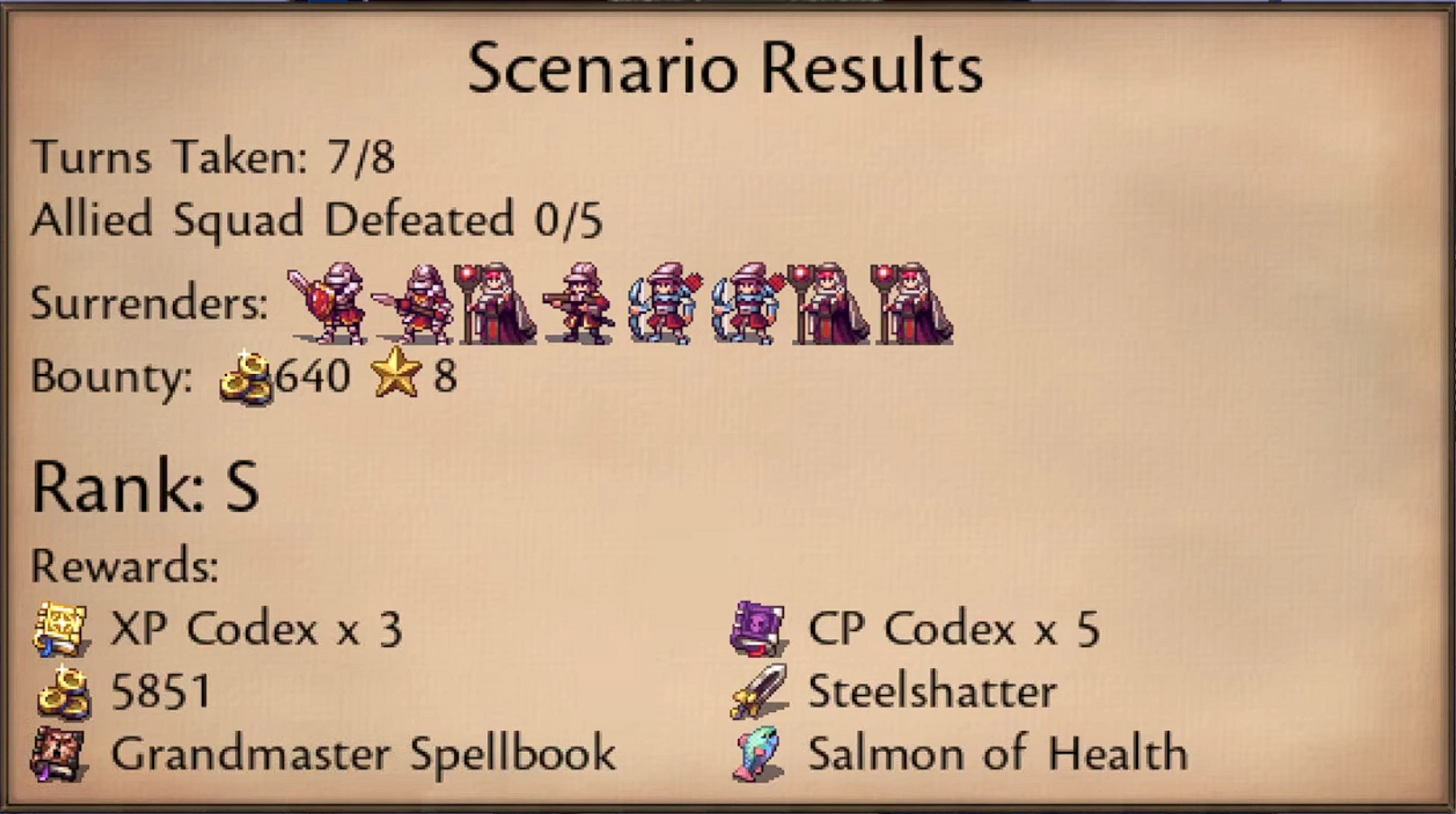 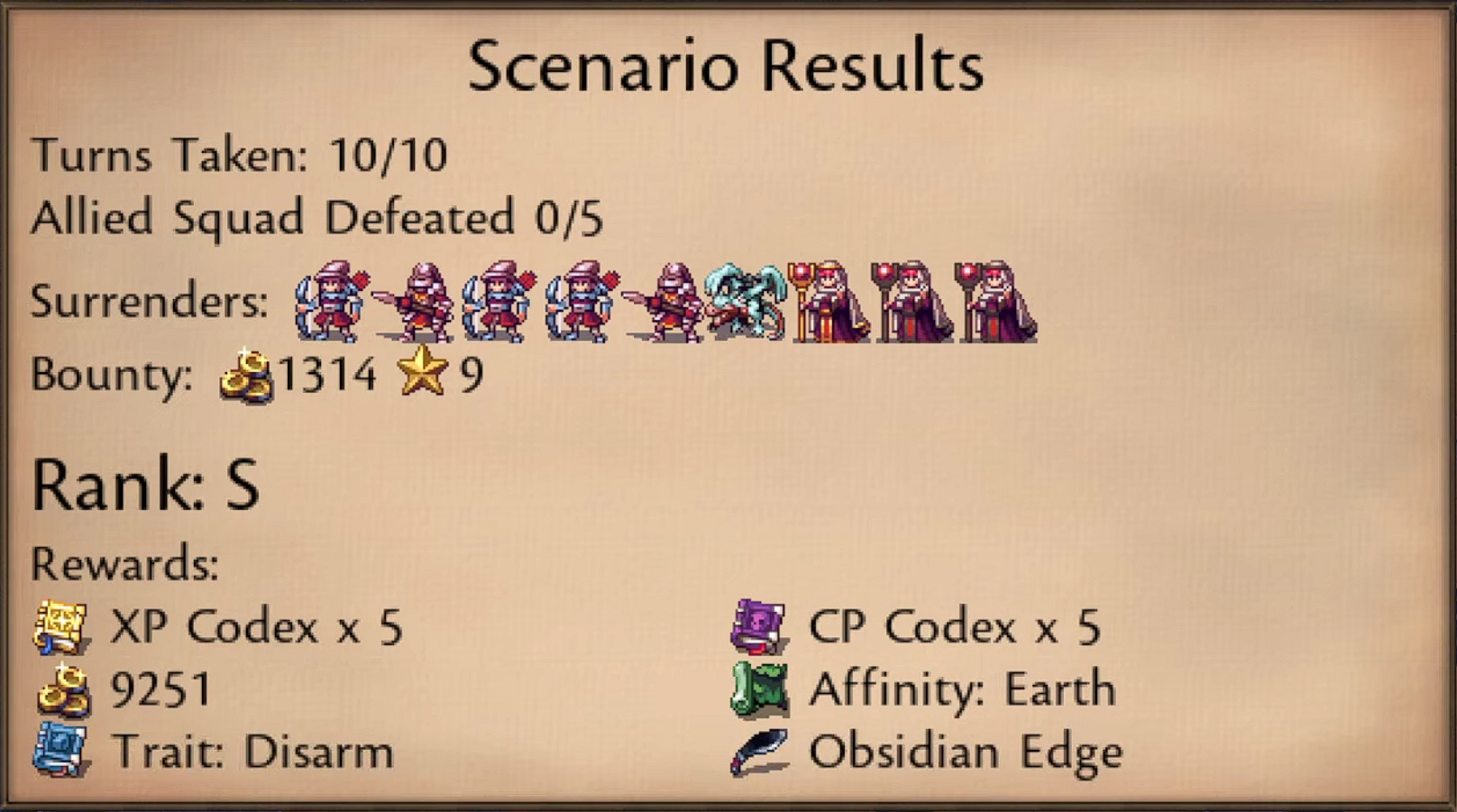 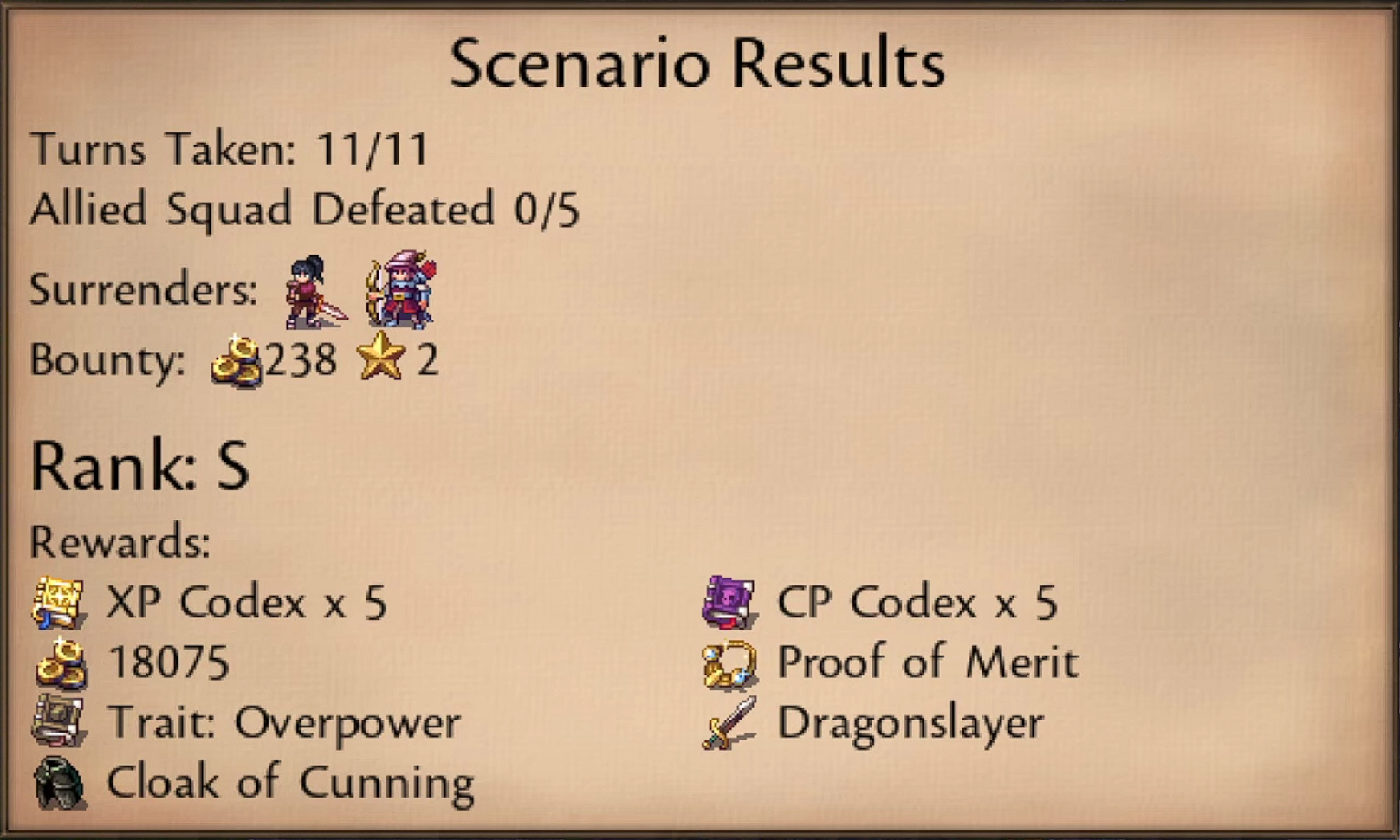 There are several key points to understanding how Leadership gain works. 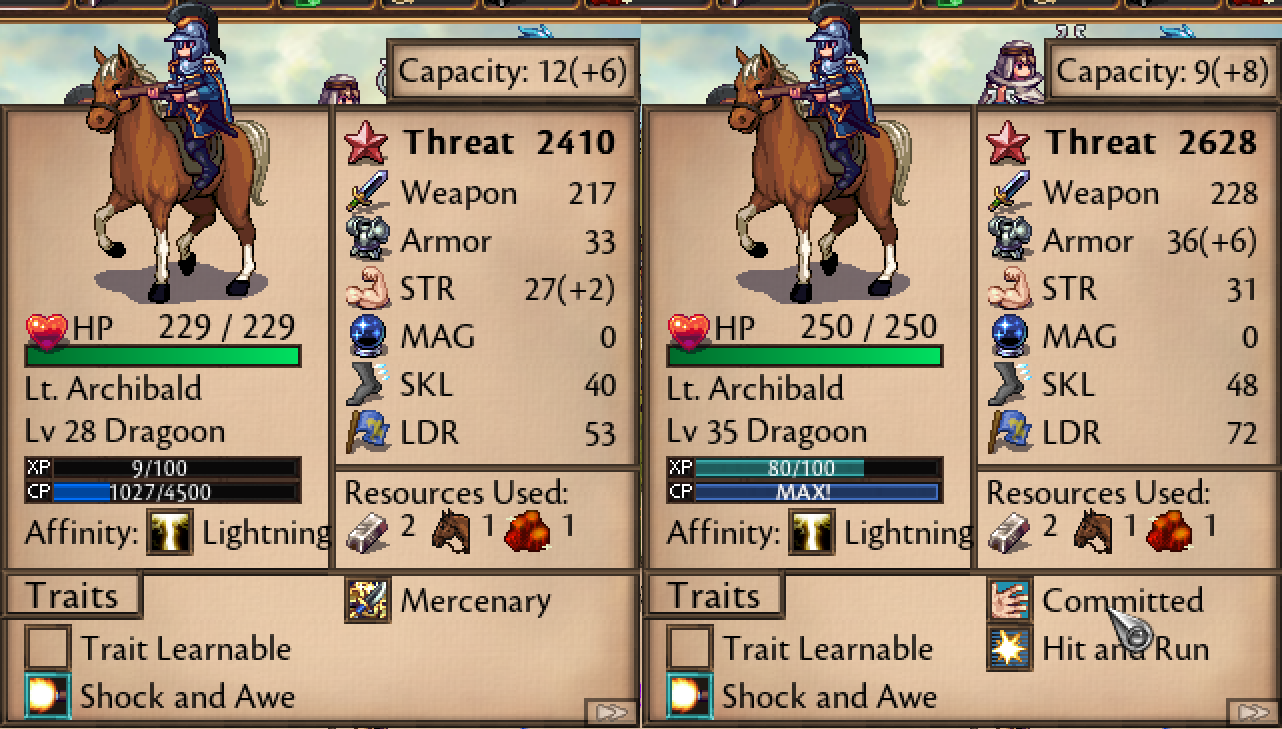 The above leadership gain occurred when I stayed within the time limits of each battle, simply from clearing 5 Gaiden missions + numerous arena battles.


– Think of Leadership as having a “Hidden” LDR XP Bar.

– Mentorship: A squad leader will provide LDR XP to all units in his party, until they reach [The Leader’s LDR -10]. Mentorship only applies with combat.

– When a LDR XP bar is filled, the unit gets +1 LDR. Light affinity has a smaller LDR XP bar, while Dark has a higher one.


Thus, the best way to increase both leadership and loyalty is:

1. In bronze arena, set up a unit with the lowest threat rating, which will ensure it is the target of attacks.

2. Do you hurt the 2 archers on the map. They will constantly attack you every turn (note: the more attackers, the more XP is earned).

3. If you wish to grind, you can farm this for as many turn as you want to maximize your LDR stats.


You can also (indirectly) increase leadership via equipping 5 artifacts:

1. Lindly (the MC) always gets some capture XP when allies perform captures, so he/she should not perform and captures.

2. IMO, the best units to perform captures are Diana, Stefan and Jules.

1. Lindly (the MC) always gets some capture XP when allies perform captures, so he/she should not perform and captures.

2. IMO, the best units to perform captures are Diana, Stefan and Jules.

Always check them out.

They are nearly identical to markets, but you have a higher chance of getting rare items and named mercenaries. They also offer Drakelings for sale, which can be grown into might dragons and eventually, dragon riders.


Note: You can have a maximum of 15 dragon riders (11 from bazaars + Nibbler, the mercenary Cloudrender Athelis, Azuros, and 1 more)


There are a total of 11 chapters with bazaars, which are the following: 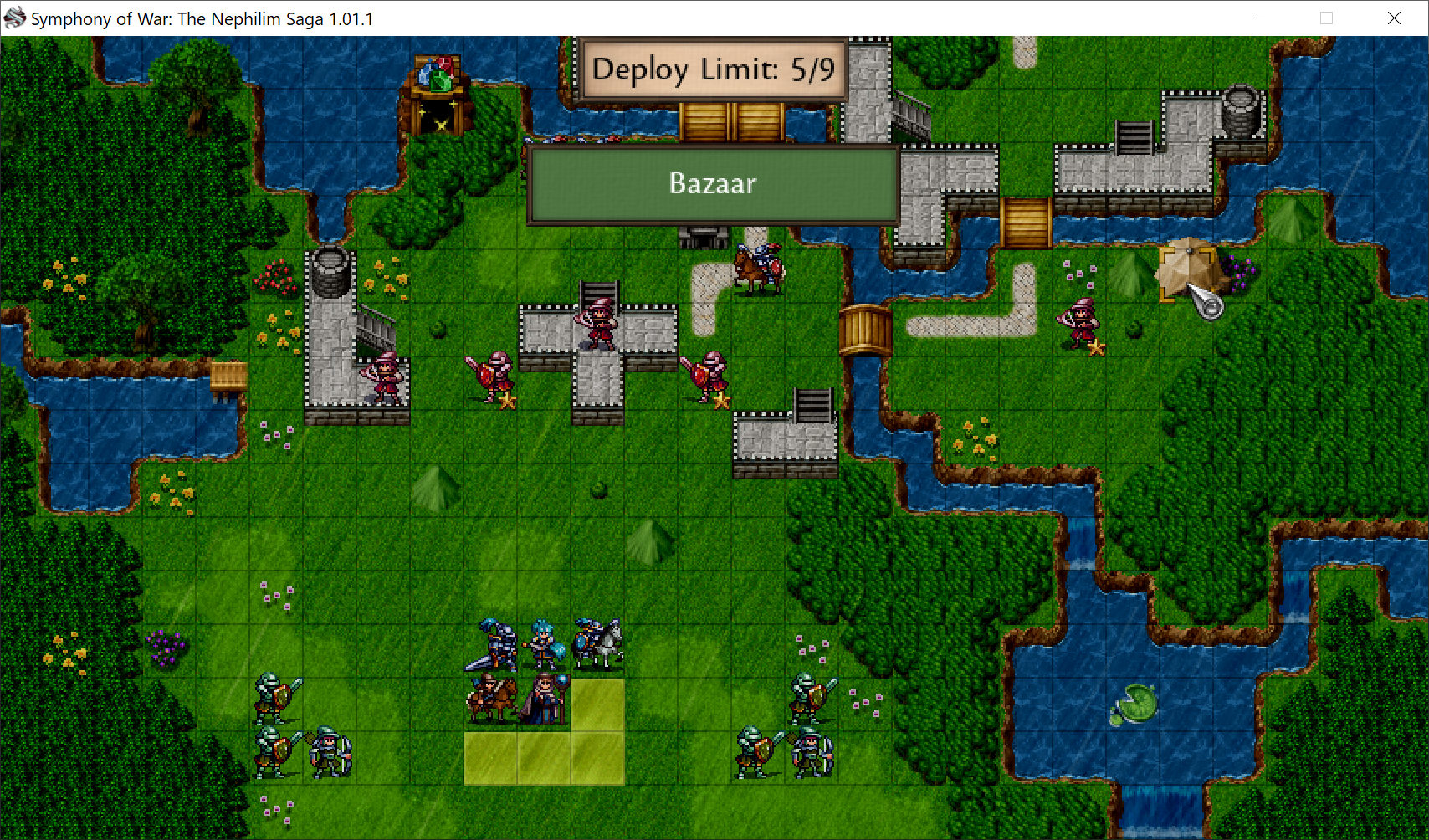 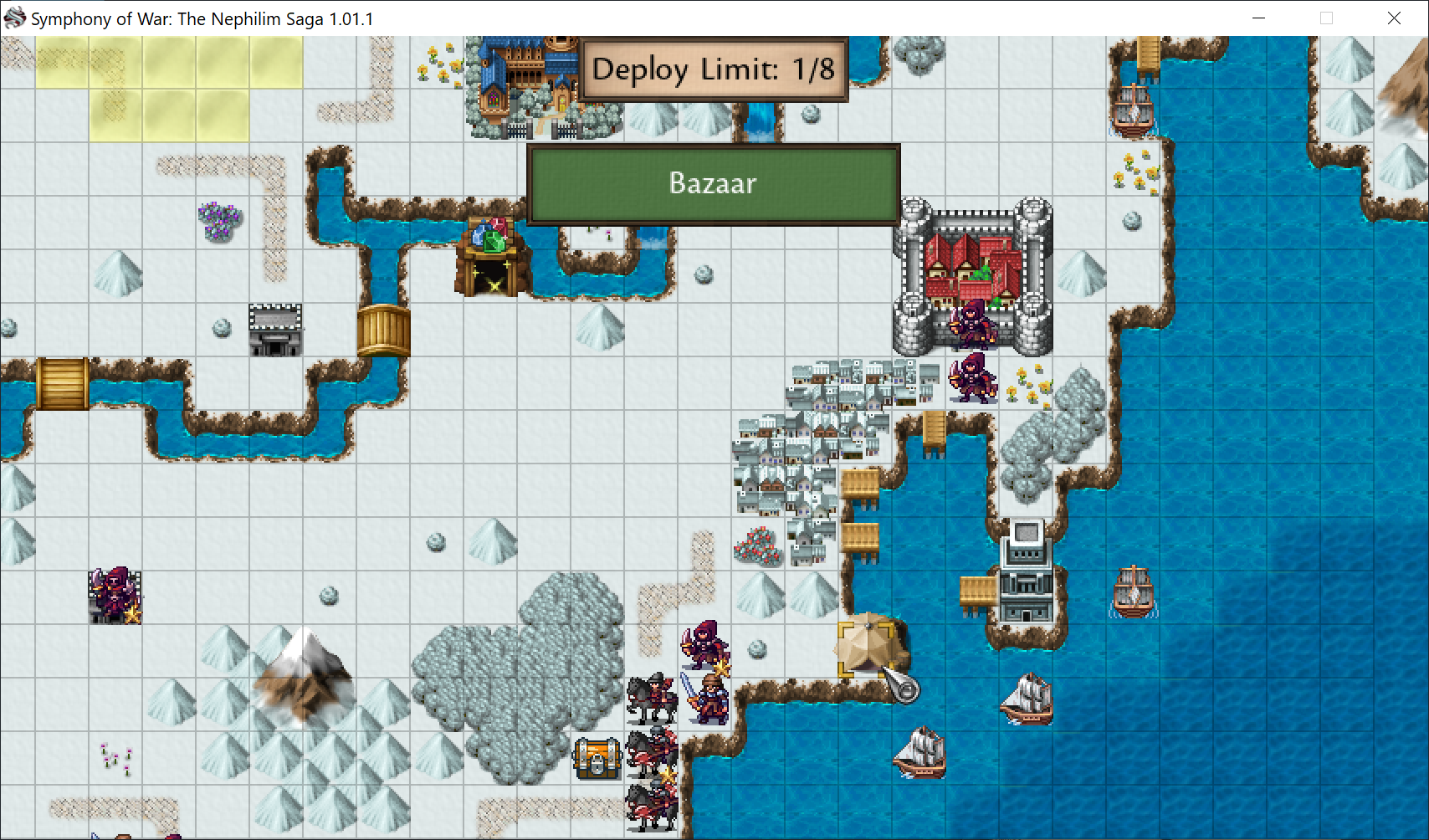 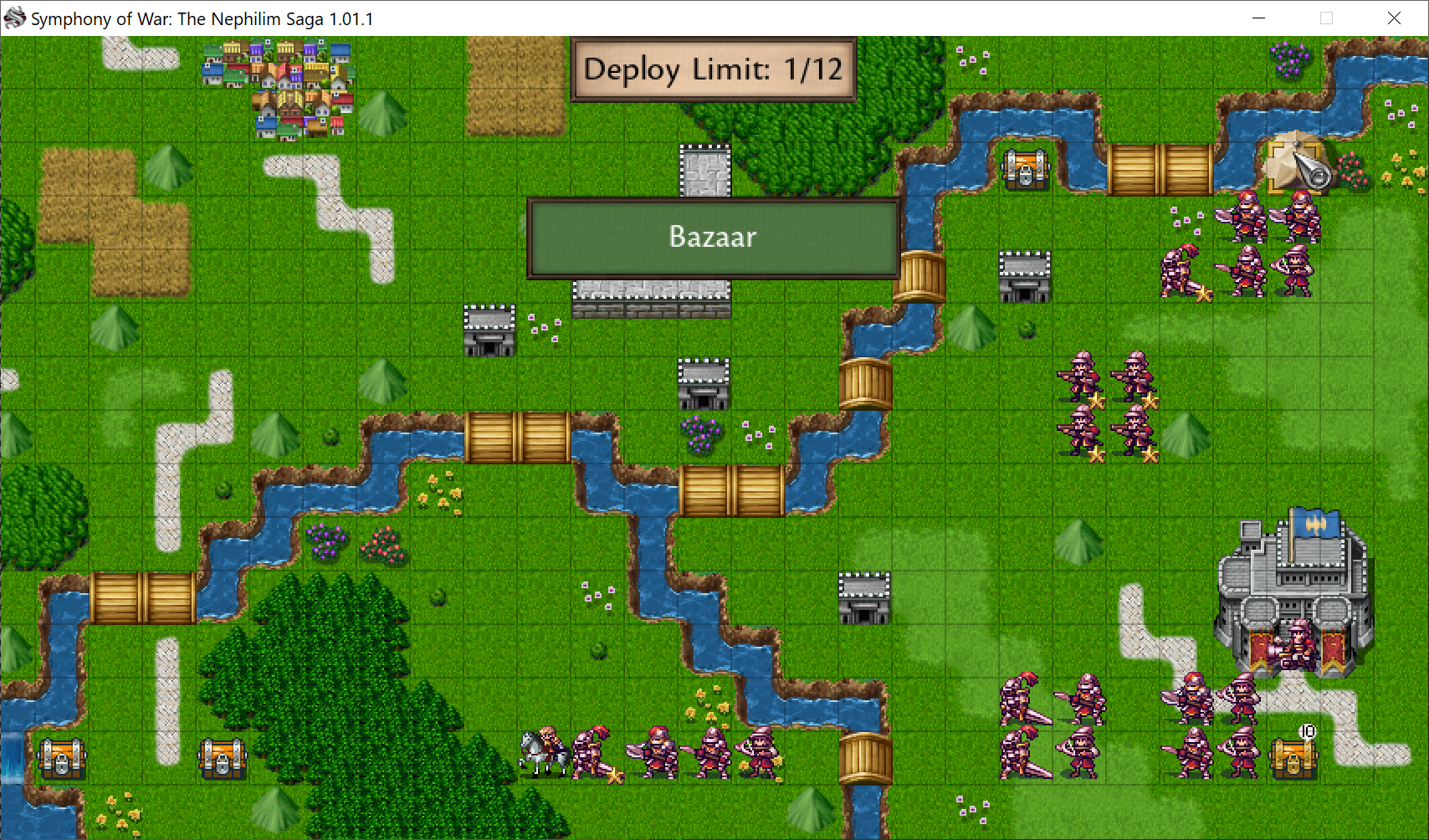 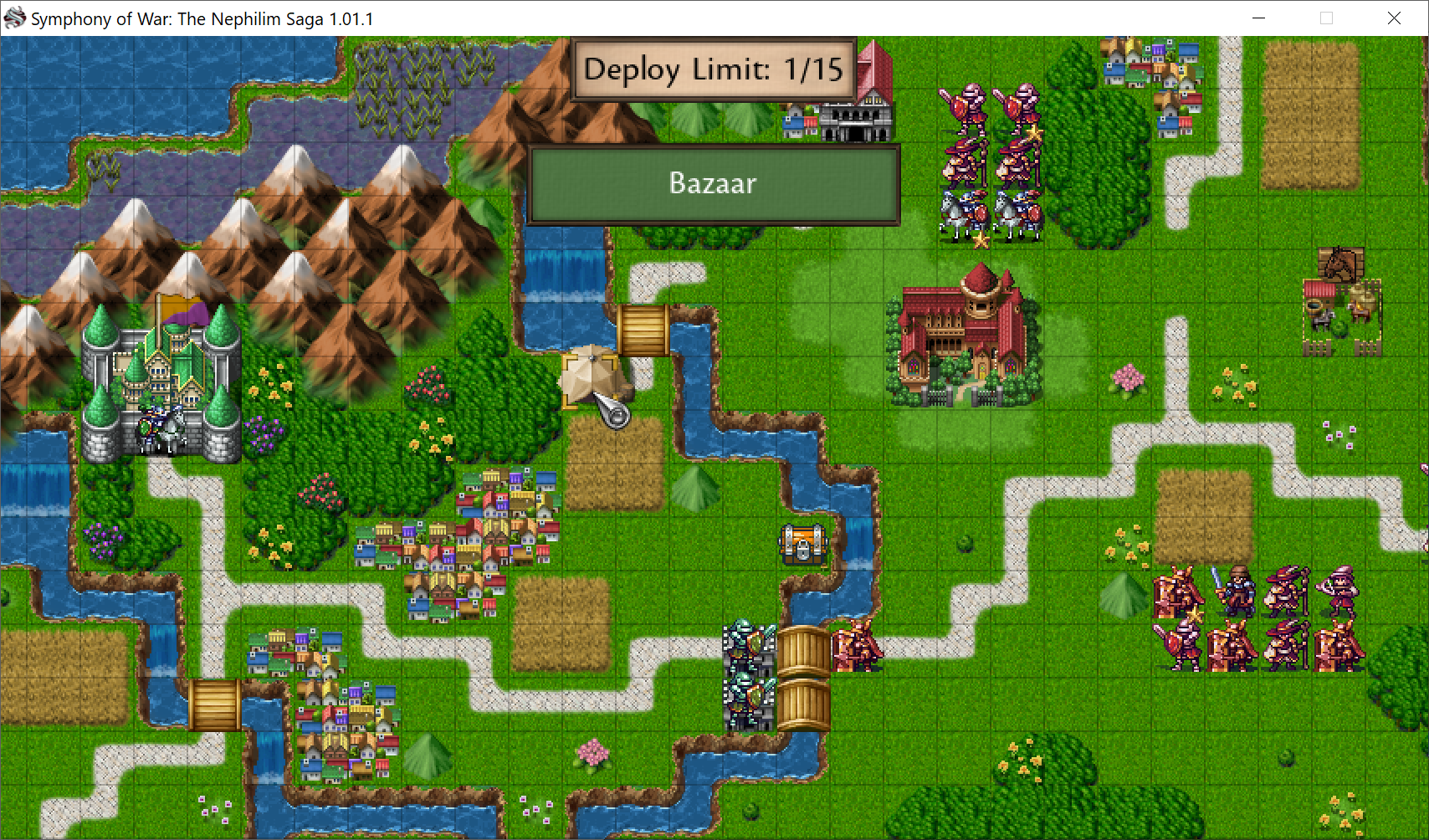 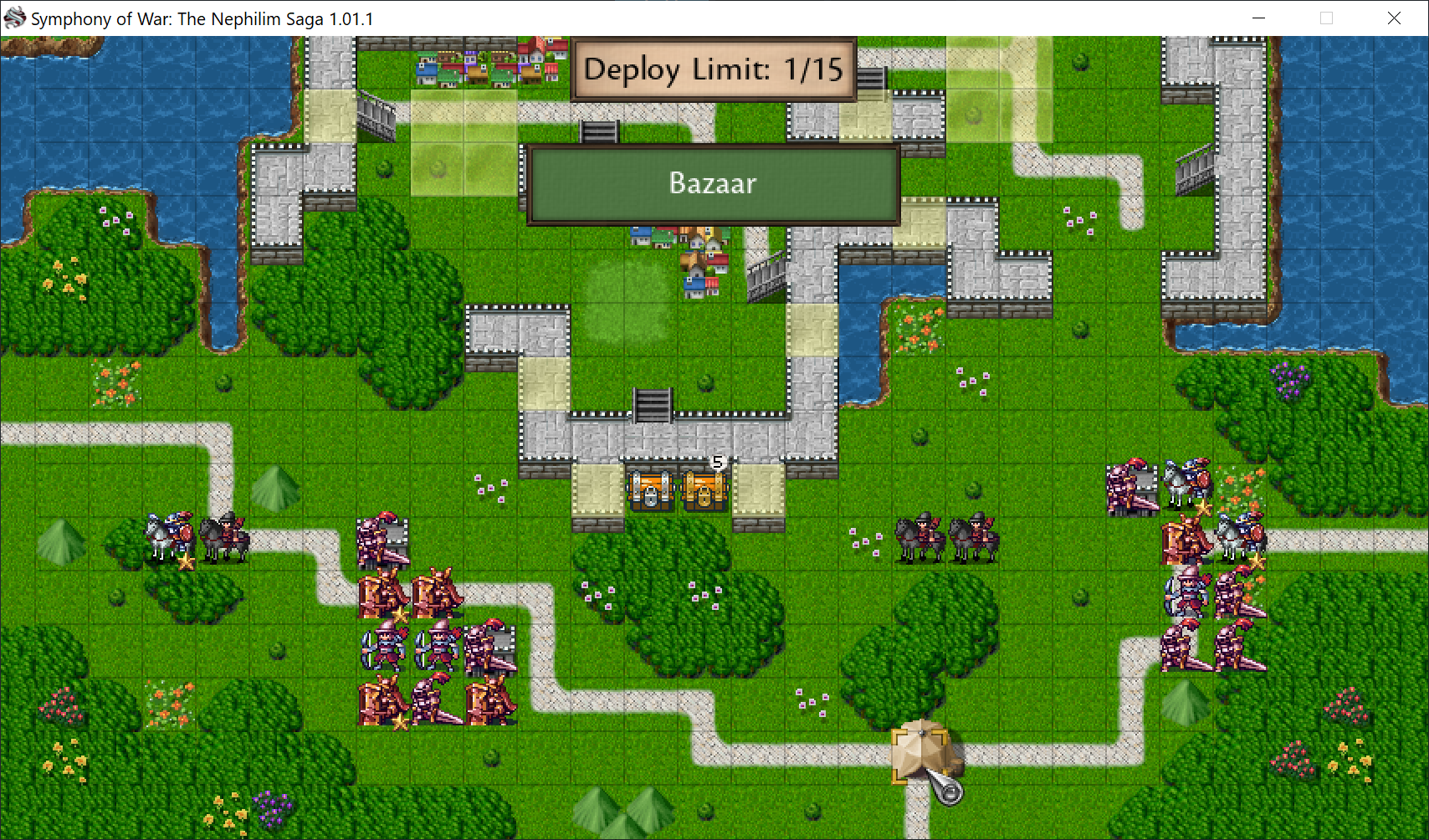 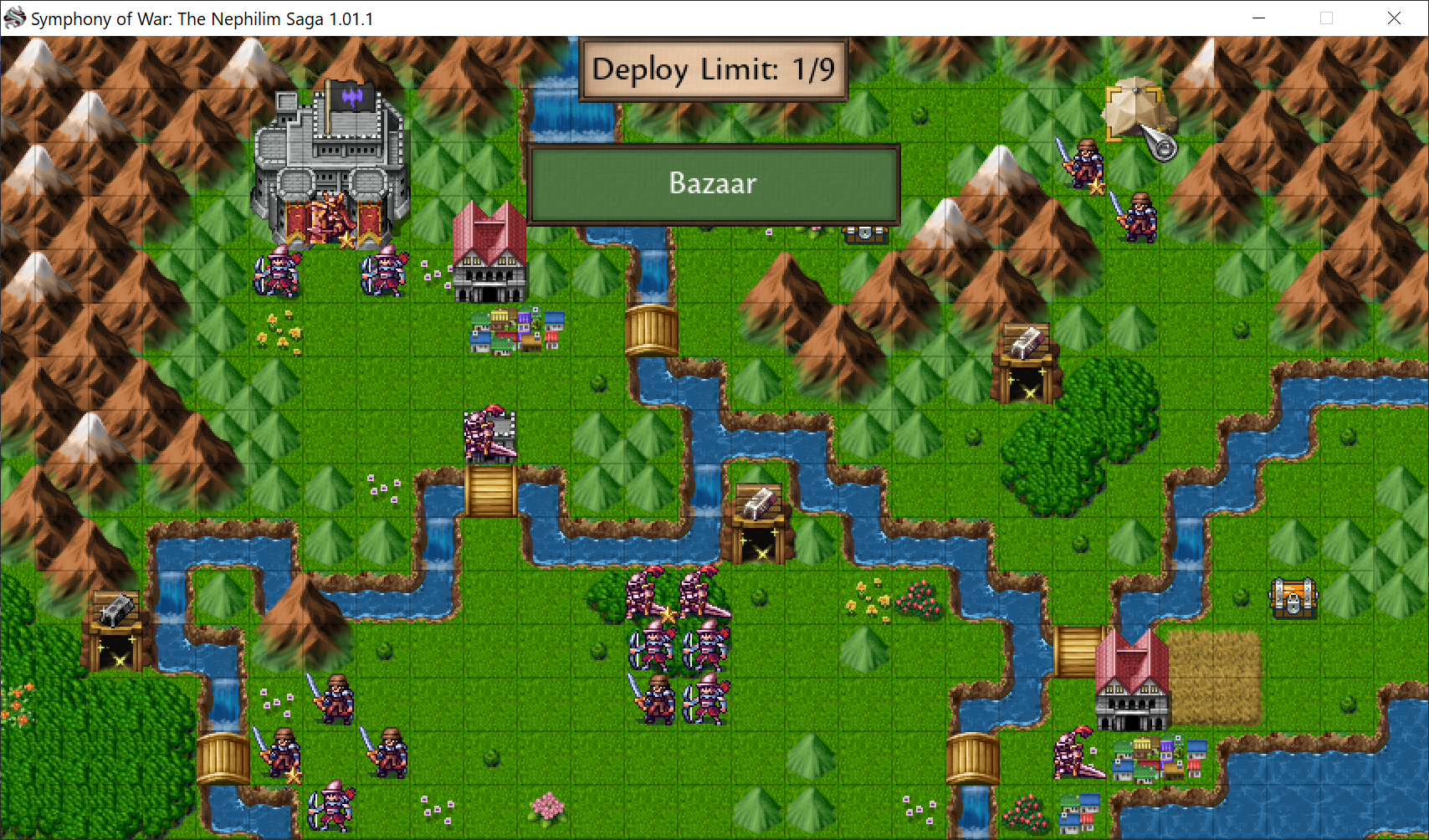 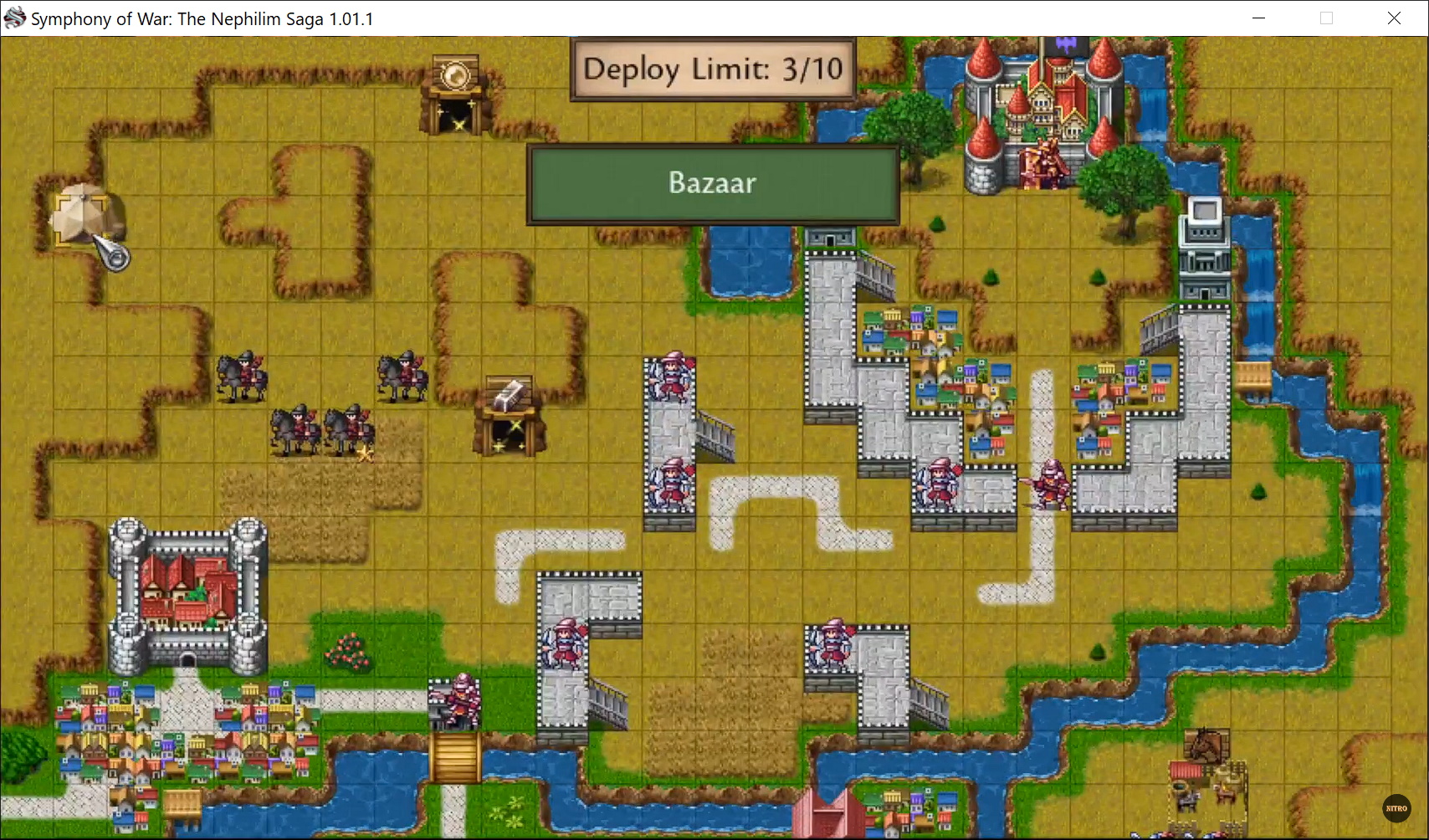 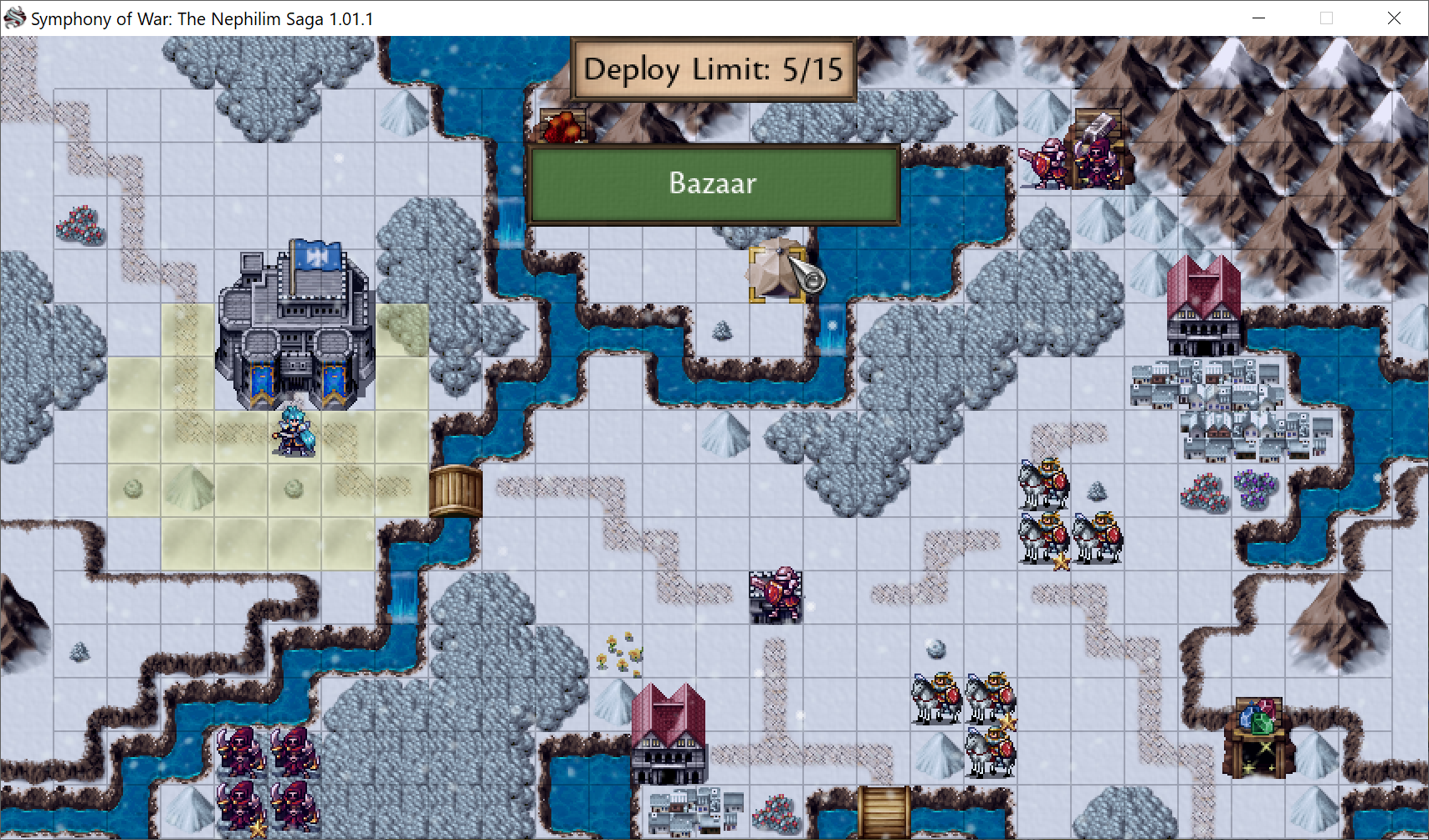 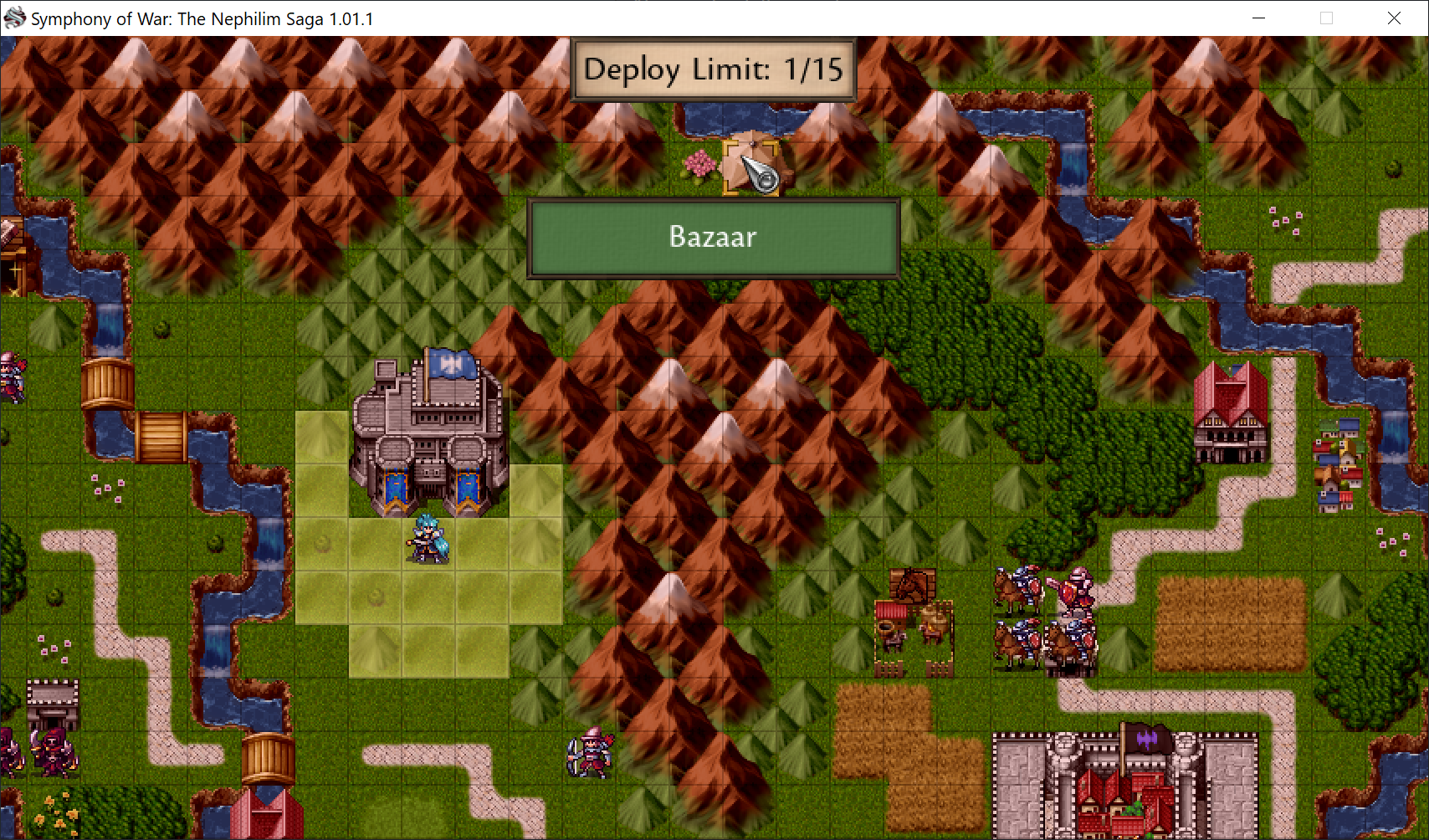 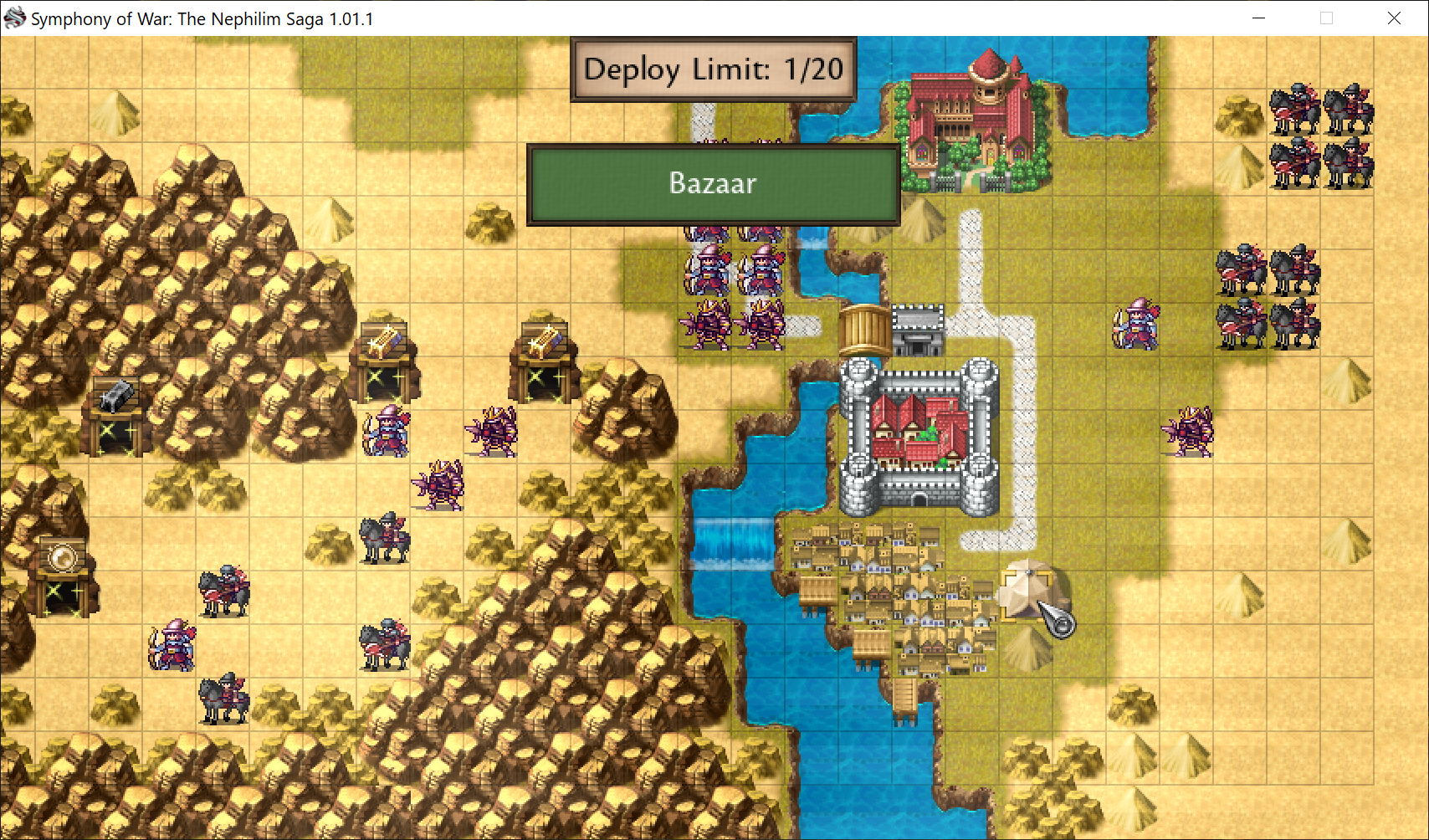 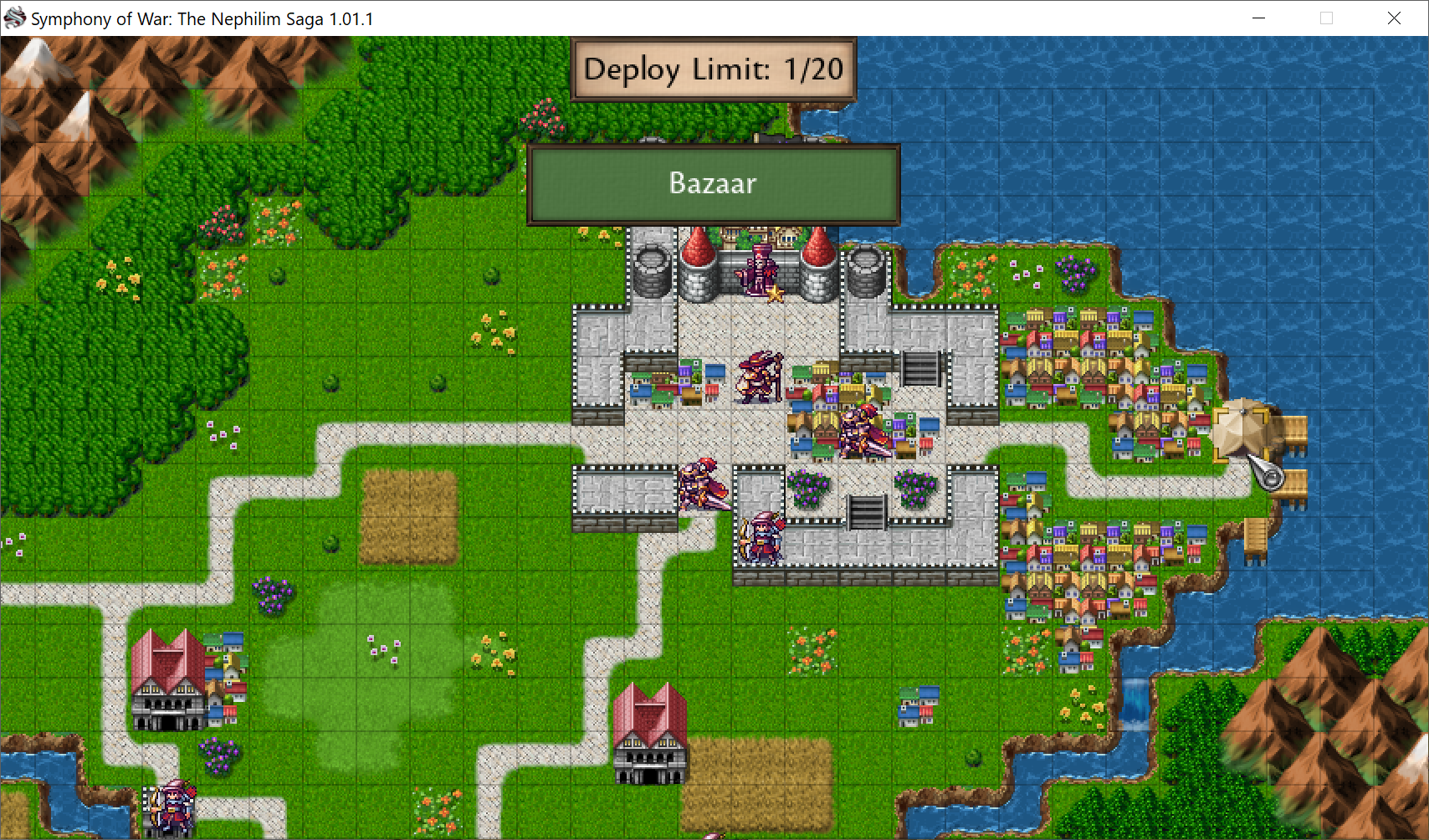 There are 3 simple rules that the AI follow when it comes to targeting.


1. The AI moves towards the closest target.

2. If there is no path to the closest target (e.g. all your units are already surrounded by enemy units), they will choose to take the “longer” path by wrapping around. If you are aiming to get the … How? – [steamcommunity.com]  achievement for Chapter 12, it is crucial to avoid getting surrounded since enemies will march into the fort/castle, and seize your fortress base, resulting in an instant loss.

3. If there are multiple targets in range, the AI will target the lowest threat value.

1. A squad purely of 5 priestesses/medics is a great archer bait in the early-game, drawing away attention from other units, due to it’s very low threat.

2. The Noisy Cricket Artifact reduces the threat rating of a squad by 15%.

3. Threat value is manipulable because some artifacts are worth a lot more than others.

Below is 4 screenshots of the exact same party, but with 4 different artifact configurations, with the threat rating ranging from 15K, 19K, 23K and 33K. 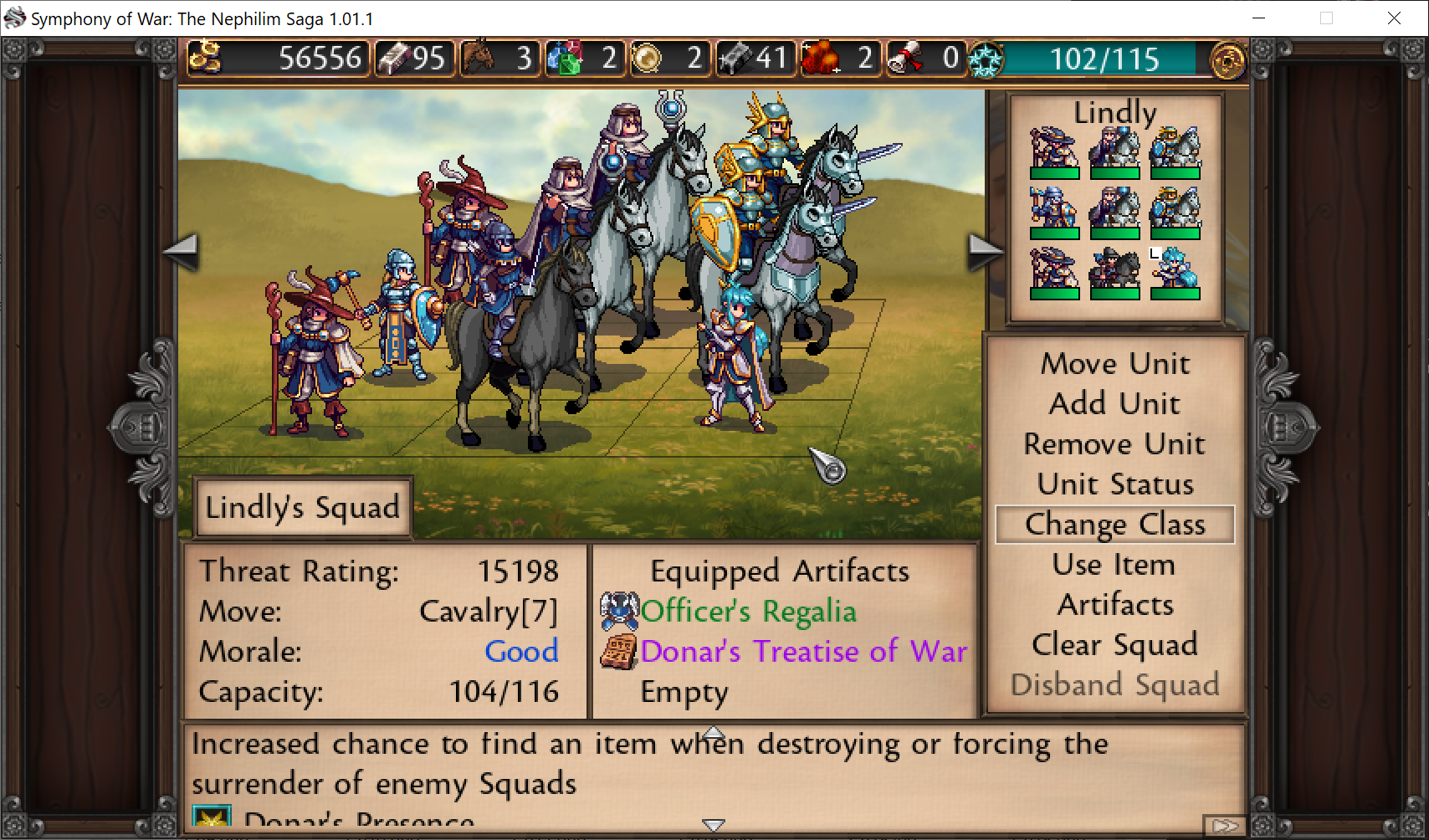 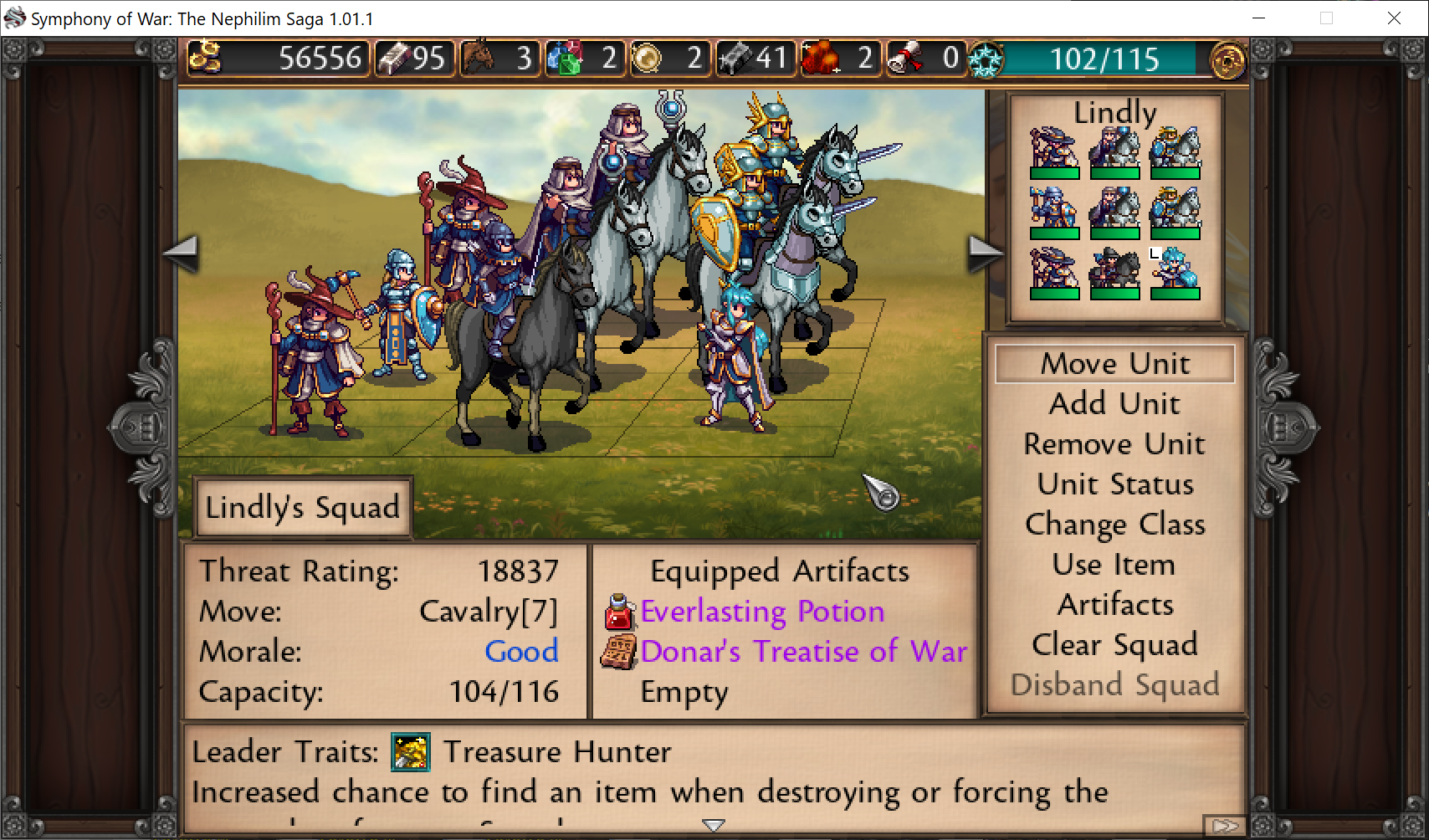 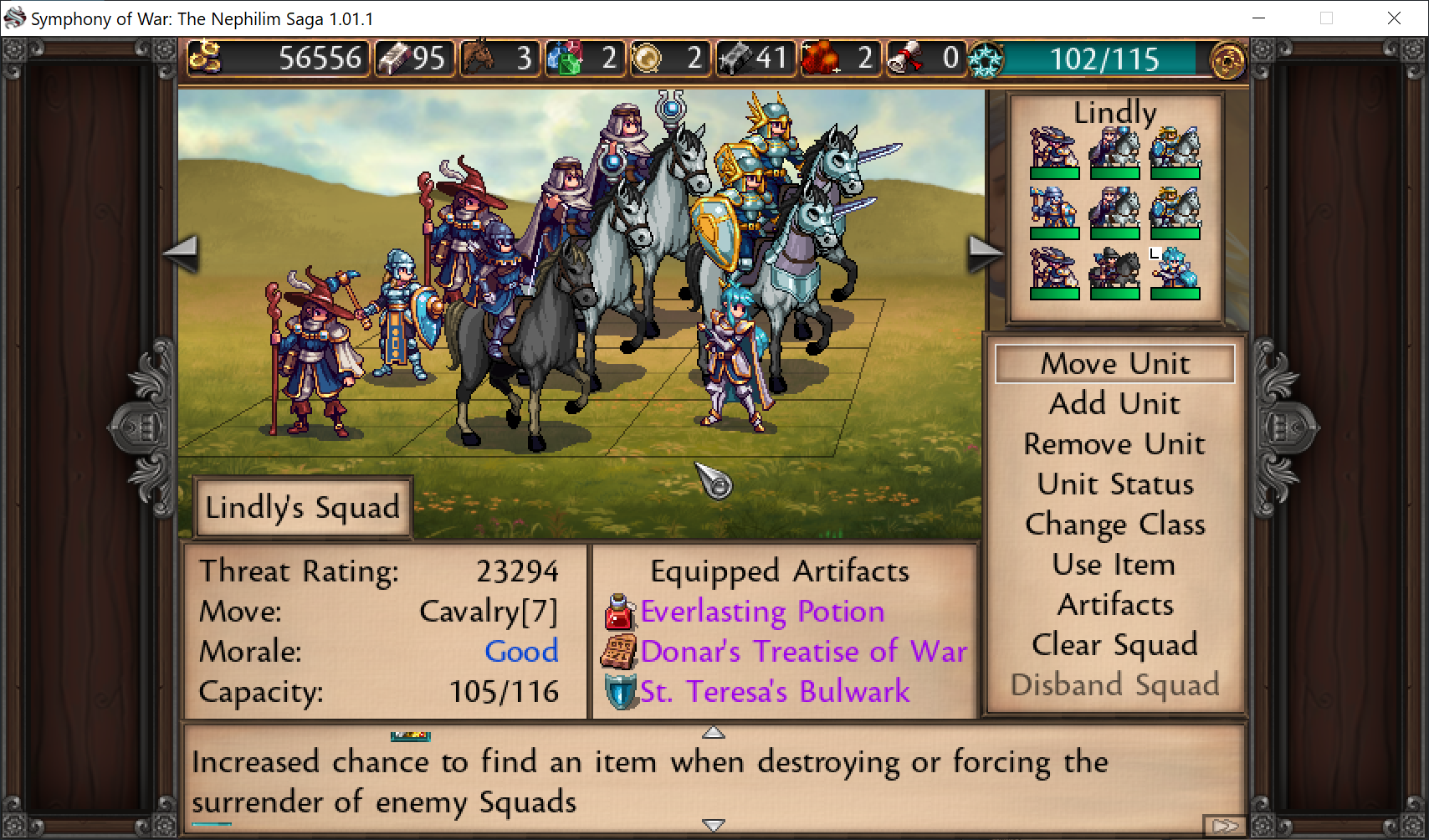 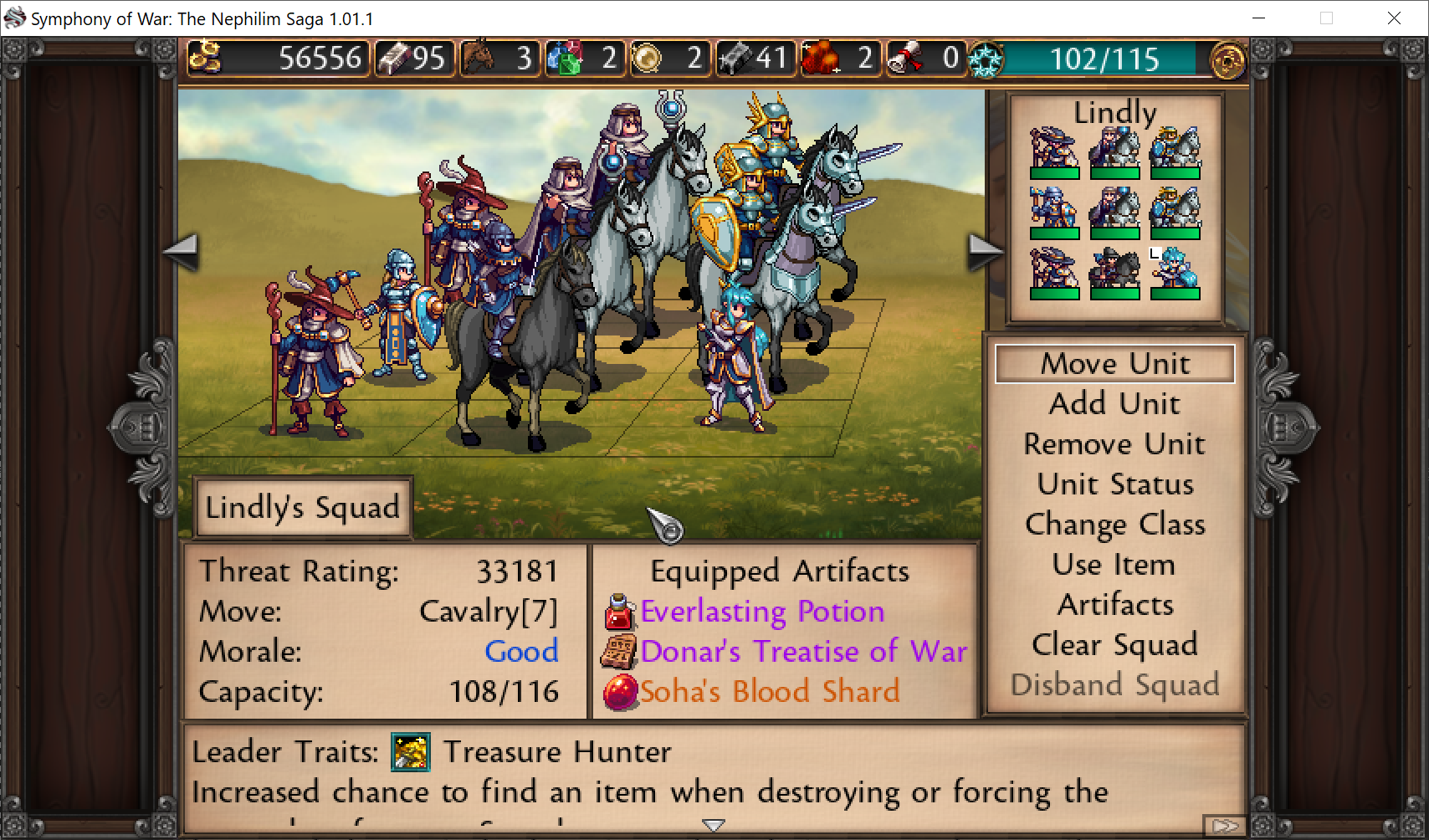 This is all we can share for Tips and Tricks for Success – Symphony of War: The Nephilim Saga for today. I hope you enjoy the guide! If you have anything to add to this guide or we forget something please let us know via comment! We check each comment! Don’t forget to check SteamClue.com for MORE!