Best Weapons in Bloodhunt: Ranking all the Weapons from Worst to Best

All the Weapons in Bloodhunt

Currently, there are 19 weapons in Bloodhunt. With 4 of them being melee weapons. The ranged weapons contain the usual selection of guns. Such as pistols, shotguns, and LMGs.

All the Weapons in Bloodhunt


The S-tier weapons are the cream of the crop in Bloodhunt, they offer significant advantages in all ranges of combat. While dishing out large damage. Especially with the all-rounder Assault Rifle and the dangerous Toggler.


The A-tier weapons are some of the strongest weapons in the game. But unlike S-tier they sometimes fall short on certain scenarios. B-tier weapons are either situational or are not so easy to use, if you can neglect those, they are reliable guns to carry.


Moving on to the C-tier weapons. They are highly situational and hence can be overcome very easily. Especially when playing against other teams. D- tier weapons are almost always useless and only should be used when you cannot find anything else.

The pistol is the initial weapon given at the start of every round. It is the weakest gun in the game and should be replaced as soon as possible. Furthermore, it deals only 15-20 HP worth of damage. 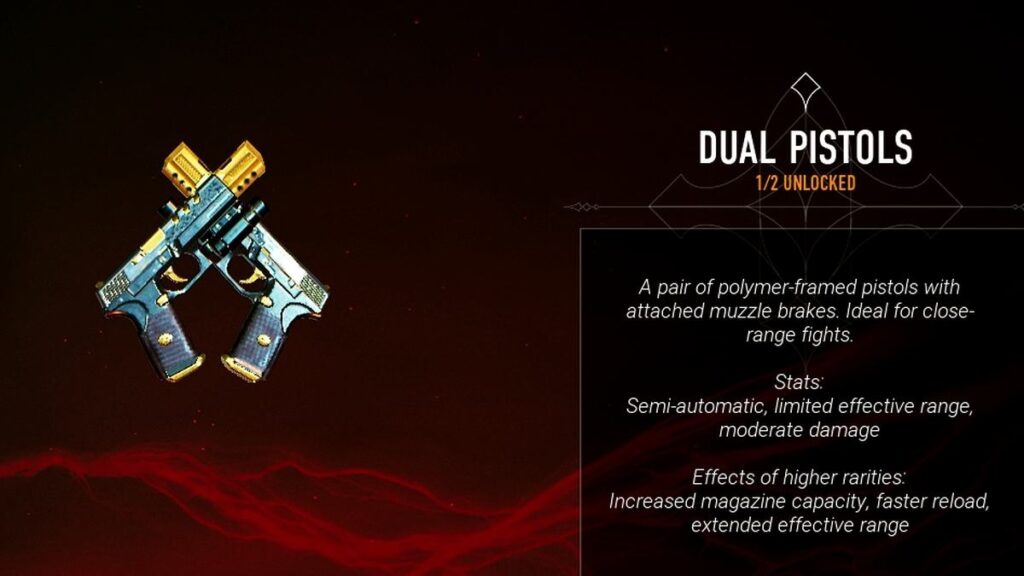 The Dual Pistols are far better than the standard Pistol given. They give out a lot of damage close-range but become weak when fighting longer-ranged shootouts. Although rarer options of the Dual Pistols have increased ranged damage. Along with better reload speeds and greater ammo magazines. 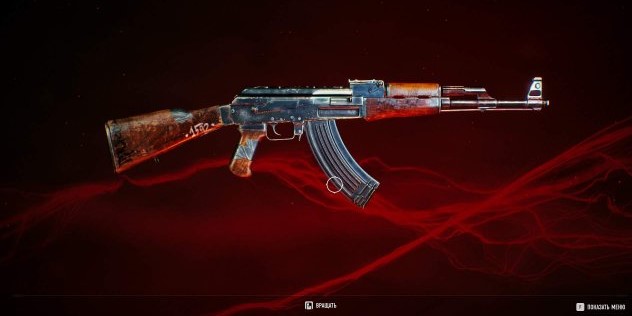 The Assault Rifle is currently the most versatile weapon in the game. As it fares well at all distances, as well as having a great fire rate. Furthermore, the rarer options increase all the stats making it a must-have to secure a win.

The Tommy Gun works best at close range with its large magazine and damage, and rate of fire. Although it might fall short when fighting at a distance.

The silenced SMG is the fastest weapon in Bloodhunt and can quickly take out foes standing in front of you. The only downside is that it is not too silent and other players can still hear gunshots from a fairly good distance.

The Revolver is a strong pistol that is hard to use but is extremely rewarding. Because of its additional headshot damage and effectiveness in long-range.

The standard Sniple Rifle, like any other game, provides great damage especially when shot at the head. A great choice when playing in a team as it can provide extra stopping power. Although the fire rate is sacrificed to compensate for its power.

The Marksman Rifle performs similarly to the Revolver and Sniper, but it has a better fire rate. Hence, one can cautiously use it in mid-ranged battles as well.

The LMG behaves just like it does in any other game. Medium damage, large magazine, and a sustained rate of fire. Performs best at close range and has better accuracy as well than the other machine guns in Bloodhunt.

The minigun is a powerhouse as its fire rate increases as long as you hold down the fire button. Which is combined well with its ma*sive 300 rounds per reload. On the other hand, you cannot reload this Minigun mid-use.

The Toggleable Machine Gun aka the Toggler is a unique and hence versatile weapon in Bloodhunt. It has two freely toggleable modes. A long-range mode that is more accurate and has a slower rate of fire. Meanwhile, the close-range mode decreases accuracy but doubles the rate of fire.

Neither of the crossbows in the game shoots normal silent arrows. Instead, the Heavy Crossbow shoots a single large bow that releases toxic gas on a large area. 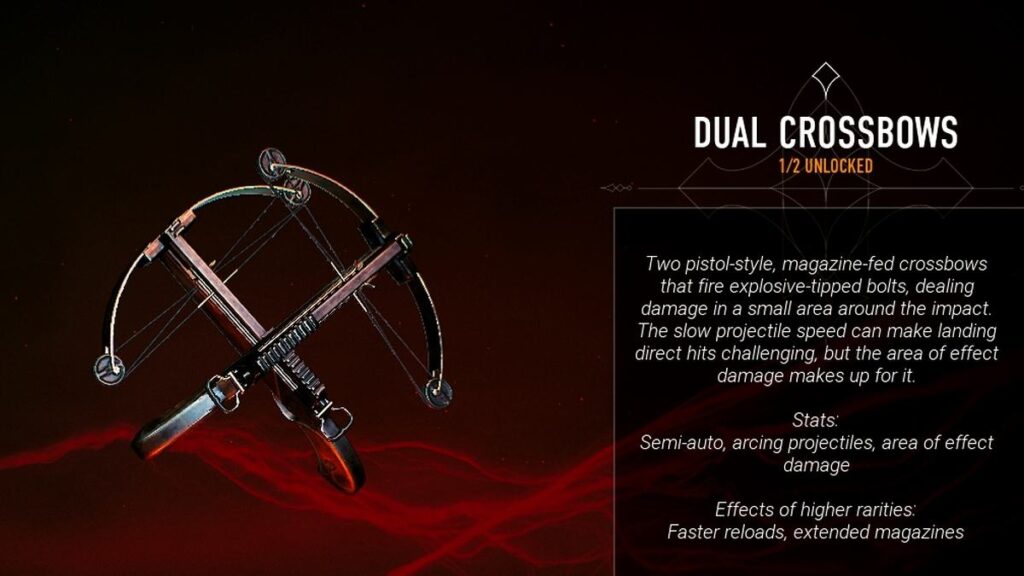 Like the heavy crossbow, this crossbow does not shoot any silent bows as well. It fires bows that cause smaller explosions causing an area of effect damage, much like a grenade launcher.

The Pump Shotgun is very strong (obviously) in close range but also holds well in the medium distance. Especially with its rarer variants, where it offers bigger magazines and faster reloads.

Double Barrel Shotgun does not differ much from the pump shotgun with its basic variant. But when the rarer options provide a tighter spread which helps to dish out some longer-range damage but not too much. Hence it’s better off used to finish off enemies right at you.

A very reliable gun because of its great accuracy as well as damage output. Furthermore, it has two modes, single fire, and burst mode. Players with good aim can use it to its fullest potential.

The Spiked Baseball Bat and Fire Axe do not differ much when it comes to using. Other than its unique attack chains. They are only handy when used as a last resort or the enemies have no weapons on them.

The Katana and Scourge Blades are more or less the same as the Bat and Axe when it comes to damage. They only differ by the special abilities they offer. Katana can deflect bullets at the shooter while Scourge Blades allows players to dash forward with a slash that causes extra damage.

I hope you enjoy the Weapon (Tier) Ranking – Vampire: The Masquerade – Bloodhunt guide. This is all for now! If you have something to add to this guide or forget to add some information, please let us know via comment! We check each comment manually!